South Iceland's Fagradalsfjall volcano started erupting this spring – and it hasn't stopped since. As visitors flock to this new fiery fave, we took a trek out to see what all the fuss is about

In retrospect, it was a poor decision to visit the Fagradalsfjall volcano at night.

The 3km hike up an adjacent mountain had been uneventful, if physically laborious. Fagradalsfjall is located close to Grindavik, on the Reykjanes Peninsula, about an hour’s drive from Reykjavik. The landscape here is eerie and beautiful and sparsely populated; wafts of sulphur leak from volcanic hot springs. Arriving for the hike, I was glad of the small mobile van in the car park, selling hot drinks and snacks.

That's south Iceland ticked – so it's time to set your eyes on the north. And there's no better way experience it than by driving the Arctic Coast Way.

Hot pools, cool food, explosive landscapes... whatever your preference, Iceland needs to be your next mini-break. 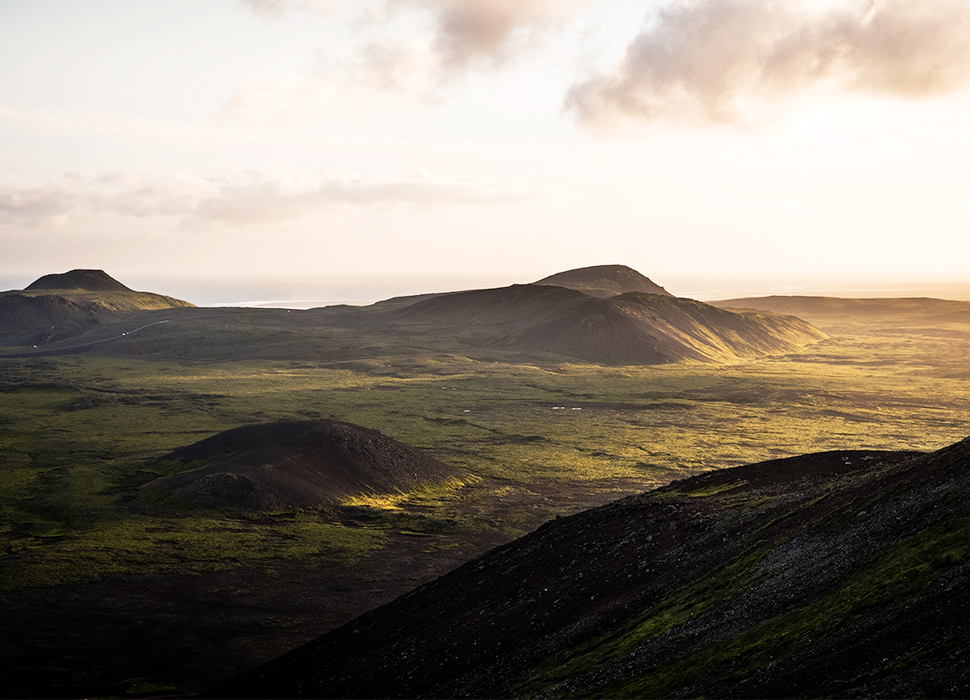 The sun sets over the otherworldly landscape near Fagradalsfjall, Geldingardalir / Image: Adobe Stock

The best view of the active volcano, which began erupting on 19 March 2021, is from a nearby hiking trail. Since Fagradalsfjall began roaring, locals and tourists have decamped en masse to watch the volcano. For a while, in the early days of the eruption, there was a party feel: people drank alcohol, listened to music, and fried eggs on the lava fields. There were fashion photoshoots, and even a wedding. 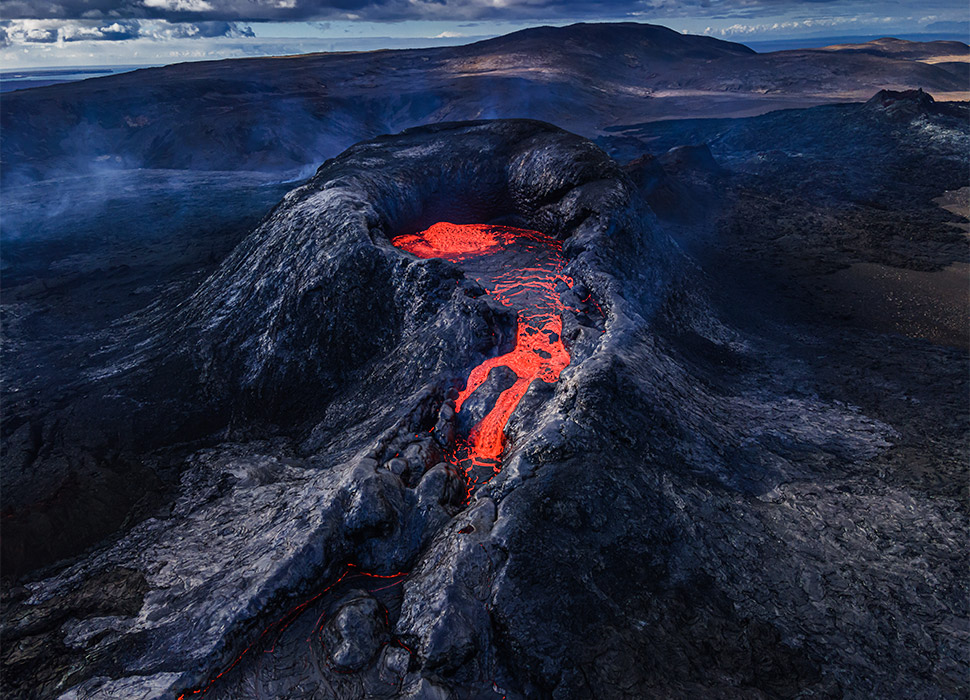 Iceland is, famously, a land of fire and ice. There are approximately 30 active volcanic systems on the island, which are responsible for Iceland’s famous hot springs, lava caves and explosive geysers. Prior to March 2021, the most recent volcanic event was at Eyjafjallajökull in April 2010. It spewed a massive ash cloud that grounded European aviation for six days, causing the highest level of air travel disruption since the Second World War.

Luckily, Fagradalsfjall is an effusive, rather than an eruptive volcano, meaning that lava leaks out of the earth, rather than exploding in an enormous ash cloud that could, once again, scupper the flight networks of Europe. Even more fortunately, Fagradalsfjall is not near any major towns or settlements, although some roads may be cut off by lava flows if the volcanic activity doesn't subside. But the remote location makes it a perilous visit, particularly in winter, when Iceland’s weather can turn in an instant, leaving hikers stranded in inclement weather many miles from civilisation (and rescue services.) 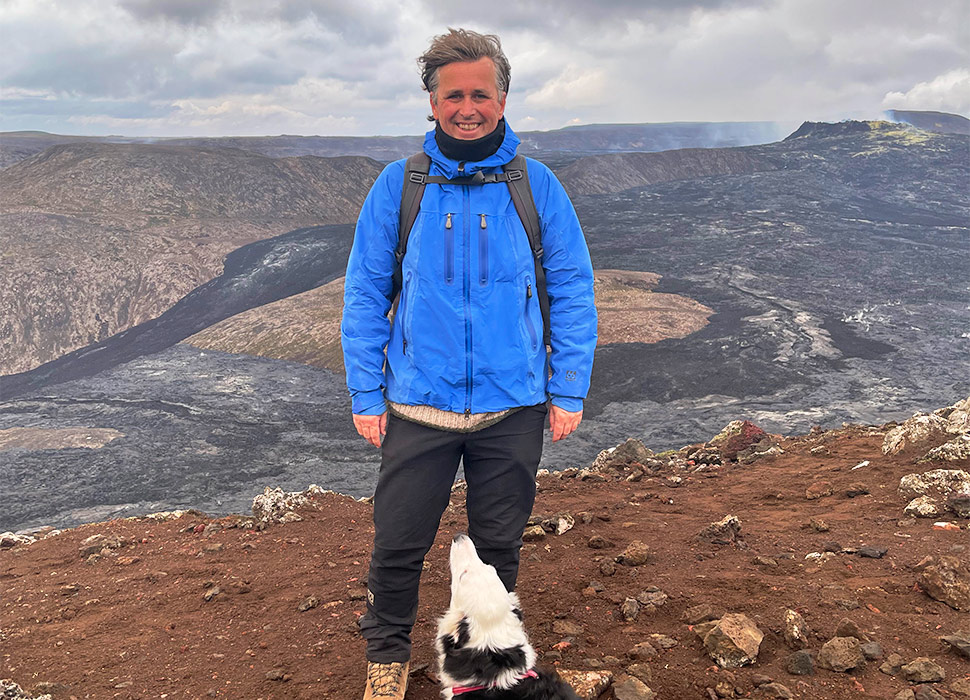 I was accompanied on my hike by journalist Valur Grettisson, editor-in-chief of the English-language arts and culture magazine Reykjavik Grapevine, and his chief morale officer Polly, who licked my face every time I paused to pet her. (Polly is a very good dog.) Grettison is a local celebrity, known for his informative and excitable YouTube videos about Fagradalsfjall, and interviewed earlier in the year for a lengthy New Yorker feature on the volcano. We are stopped repeatedly on the way up the mountain by wellwishers. “Love your videos!” someone shouts. 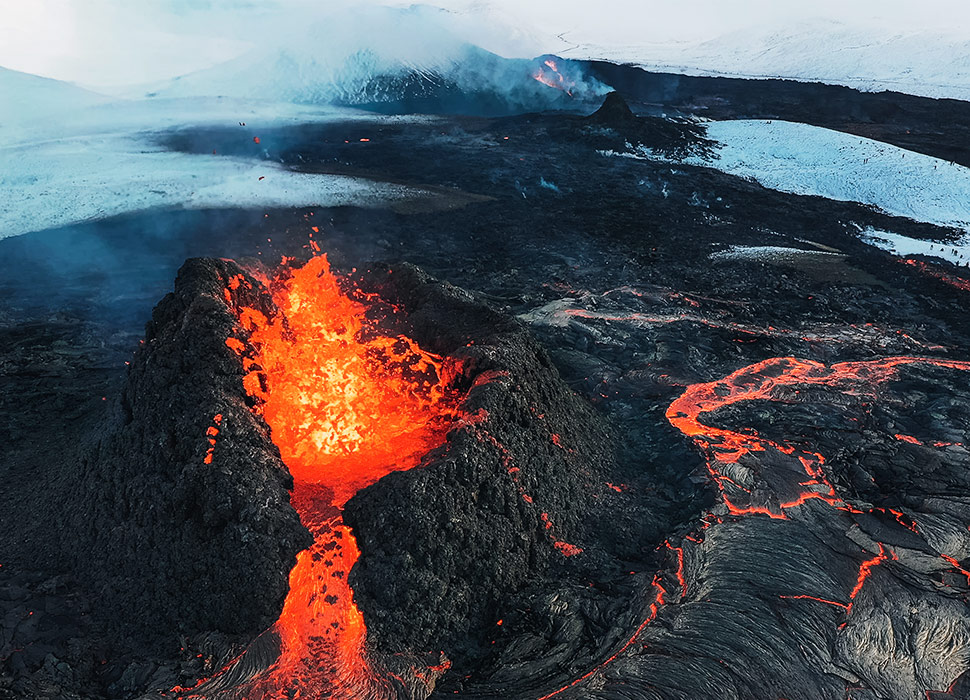 When we visit, in September 2021, the locals have melted away. Gore Tex-wearing tourists approach the summit with determination, holding torches in the evening twilight. The friendly and affable Grettison sets a keen pace, and I huff and puff to keep up. “This is officially the longest eruption in the 21st century,” says Grettison.  When it first erupted, he says, “it was like the gate to hell had just opened. Red sky all around.”

At the summit, the wind is bracing. From the top, the lava fields stretch towards Fagradalsfjall, which simmers like a cauldron. I can pick out thin slivers of red magma, still glowing beneath the cooled crust. I step on the lava field and am immediately chastised. “It can get to 1200 degrees,” Grettison explains in an upbeat tone that does not suggest, to me, the presence of imminent danger. “If you fall through it you are in big trouble!” 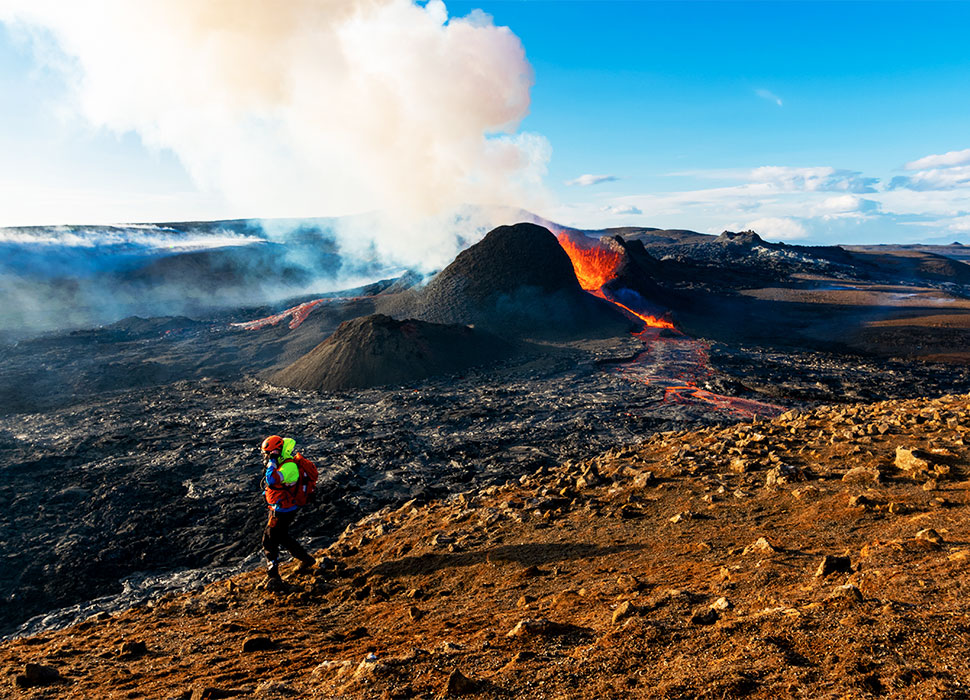 Polly gambols on the lava field as Grettison and I perch awkwardly for a chat. “The only suitable comparison,” Grettison says, surveying the moon-like landscape, “is The Lords of the Rings.” Whiffs of sulphur belch from the crater. It’s so cold, my nose continually streams. This is Grettison’s 30th visit to the volcano. He was one of the first to make the trip here back in March. It was even colder then. “Winter in Iceland,” he says, with some understatement, “is harsh. It can be quite dangerous actually.”

There is so much weather in Iceland, all the time. “Sometimes we have three weathers,” says Grettison, “sunny, raining, and snowing.” The wind picks up and freezing raindrops start to fall. I look back across the lava field once more and reluctantly begin the descent. The steep slopes are covered in scree. The wind, previously insistent, is now positively shrill. It’s getting dark. I ask Grettison whether mountain rescue ever has to come out to rescue people who’ve fallen and injured themselves on the hike. I’m hoping for reassurance, but Grettison gives me none. “All the time!” he says cheerfully. 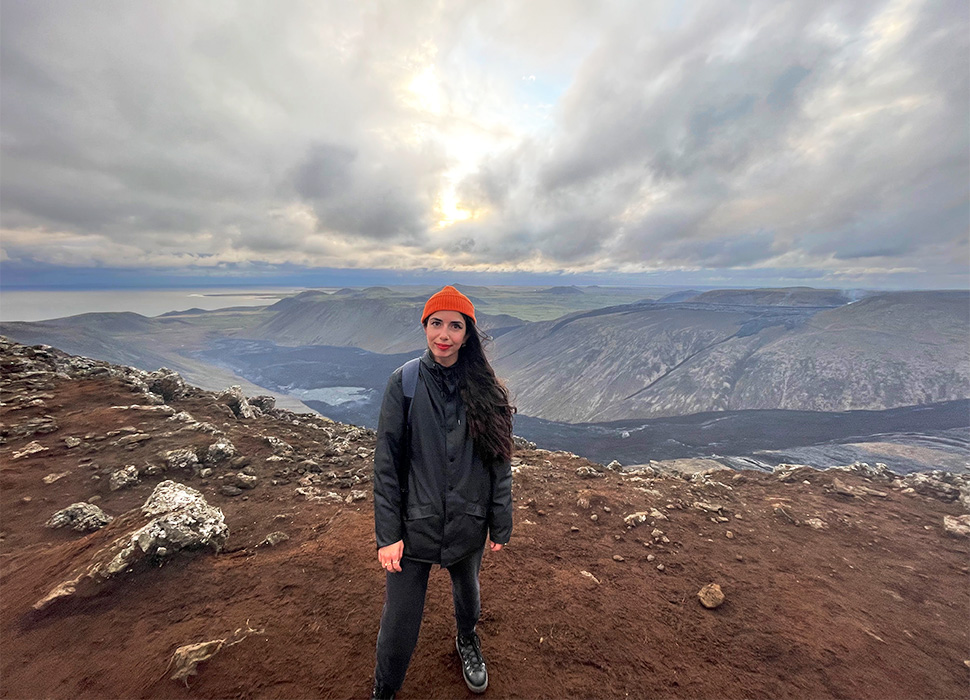 The writer in the middle of her trek

The wind is so intense, I feel like I’m base jumping. At times it’s an effort simply to stay upright, and particularly intense gusts blow me off my feet. The only light comes from a torch I grip between numb fingers. I skid down the mountain recklessly, desperate to get back to the warmth and safety of my car before even worse weather kicks in. (In Iceland, there is always more weather.) Freezing rain slices at me like tiny needles.

It takes nearly an hour to get down off the mountain, and when we finally make it down safely I’ve never felt so alive. I thank Grettison between chattering teeth and bid goodbye to Polly. Thawing out in the car afterwards, I think: by all means, go and contemplate the majesty of Fagradalsfjall if you can. But for the love of god, don’t go at night.