Blow me down! A spotter's guide to the best whale watching in Iceland

Iceland is one of the best places on Earth for catching a glimpse of our colossal cetacean bros. Here’s a deep dive on how to wangle yourself a porpoise-ful encounter…

Glad tidings! Commercial whaling activity in the waters around Iceland has basically halted over the past few years. And not before time. These stout seaborne beauties – drawn to Icelandic seas for their happy confluence of shallow geothermal-heated fjords, cold ocean currents and abundant summer zooplankton – have been hunted for millennia. Nowadays, locals recognise that whales are more valuable as spellbinding attractions than ethically iffy ingredients for soup.

Immerse yourself in the mythology at Húsavík Whale Museum – whales are a big deal in Icelandic folklore – then head out on a boat for a truly life-enhancing encounter. Summer is probably your best bet for sheer variety of whale species. But winter also has its charms – not least quieter tour boats, and a photogenic snow-capped mountain backdrop. Dip your toe in with a swift three-hour excursion from downtown Reykjavik, or for the full Moby Dick experience set sail for a totes emosh all-day voyage off the craggy eastern coast. Blubbering (almost) guaranteed.

When you're done with these big blow-hards, check out the best things to do in Reykjavik.

For even more adventure, why not trying driving Iceland's Arctic Coast Way? 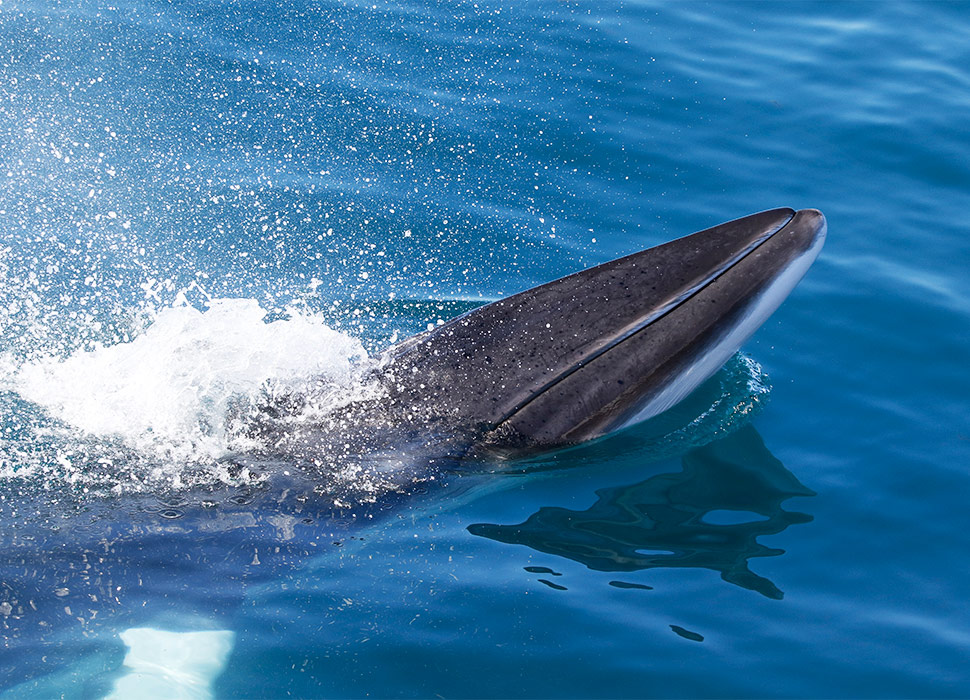 The most common whale around these parts migrates to Iceland for the summer feeding season, although the odd one or two will stick around over winter. Shy and often solitary, minkes are among the smallest whales, but can still reach an impressive 9m in length. 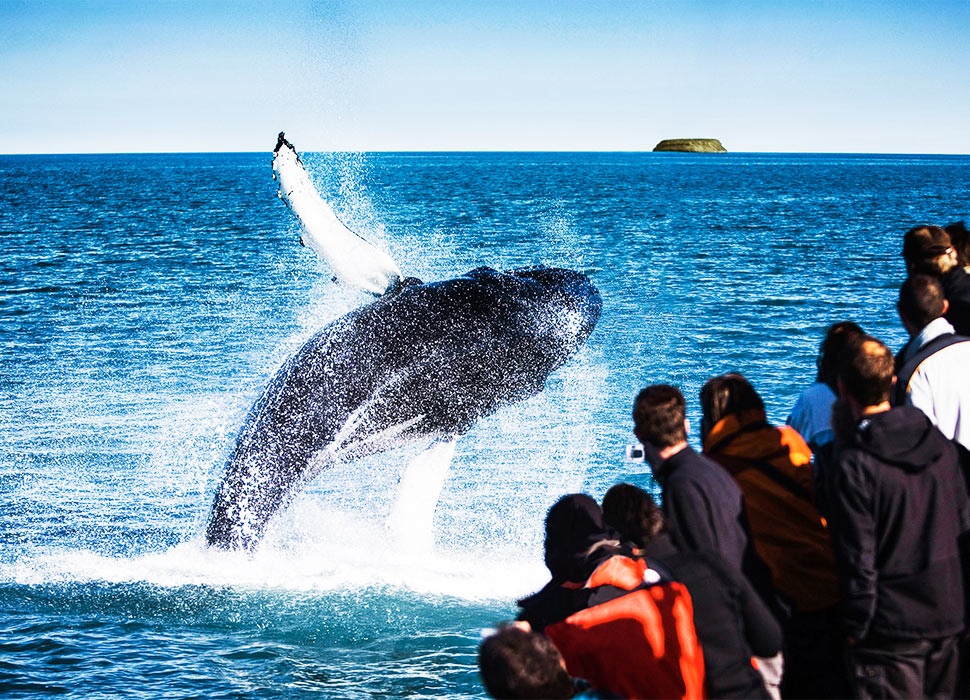 This guy's got the hump / Image: © North Sailing

Famous for their loveable lumpy faces – those bumps are hair follicles, fun fact fans – humpbacks are the gregarious, acrobatic show-offs of the cetacean world. They’re usually seen off Iceland’s northern shore, breaching and slapping in a most obliging manner. 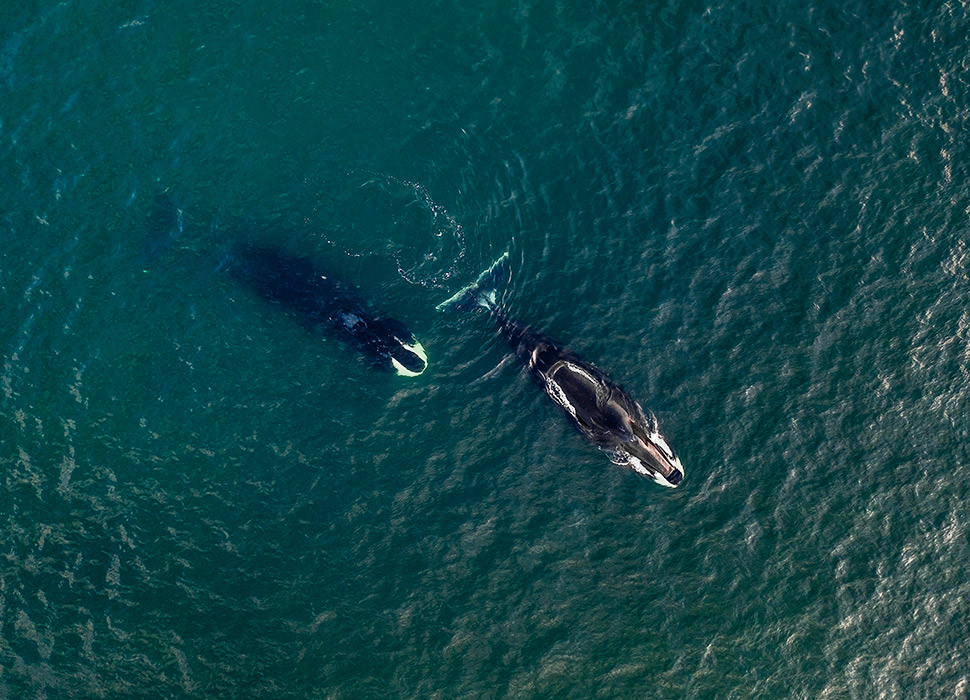 A rare but spectacular sighting, the bowhead – whose Icelandic name is norðhvalur, meaning 'north whale' –  is reckoned to be the longest-living mammal. How do we know? Harpoons dating back to the 1800s have been found jutting out of their living flanks. 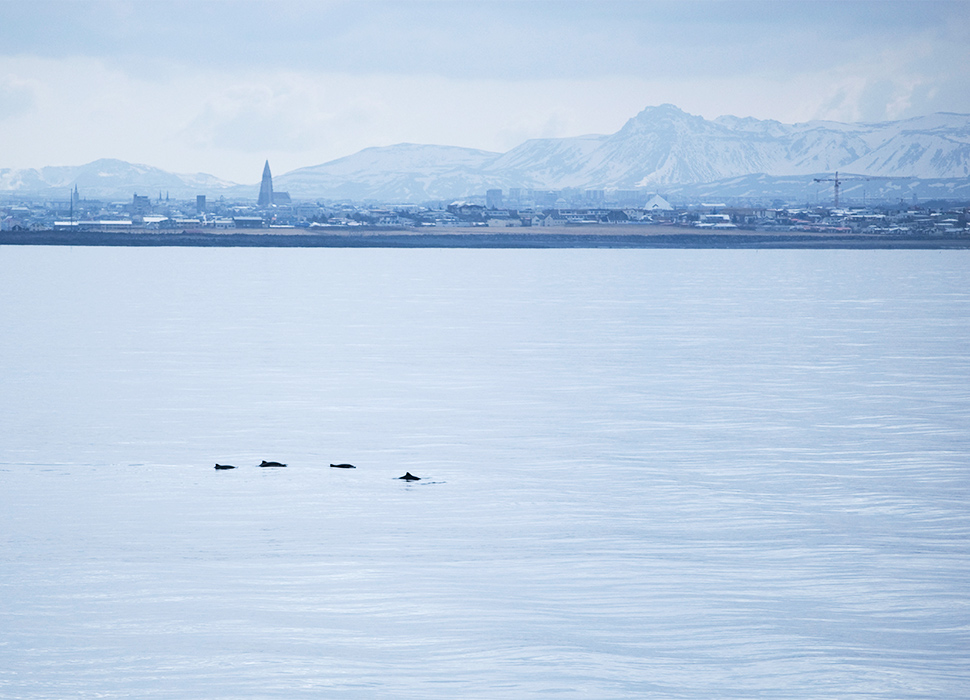 They're among the smallest, shyest whales: you’ll catch these stocky characters cropping up briefly in tiny groups or just on their lonesome. When stressed out they’re known to scoot along the surface at high speed in a move known as ‘roostering’. So be nice.

Around 5,000 of these sleek monochrome badasses live year-round in Icelandic waters. Look out for killer whales around the busy herring fishing grounds by the Snæfellsnes Peninsula, where they poke their head above the waves in a cute move known as ’spyhopping’. 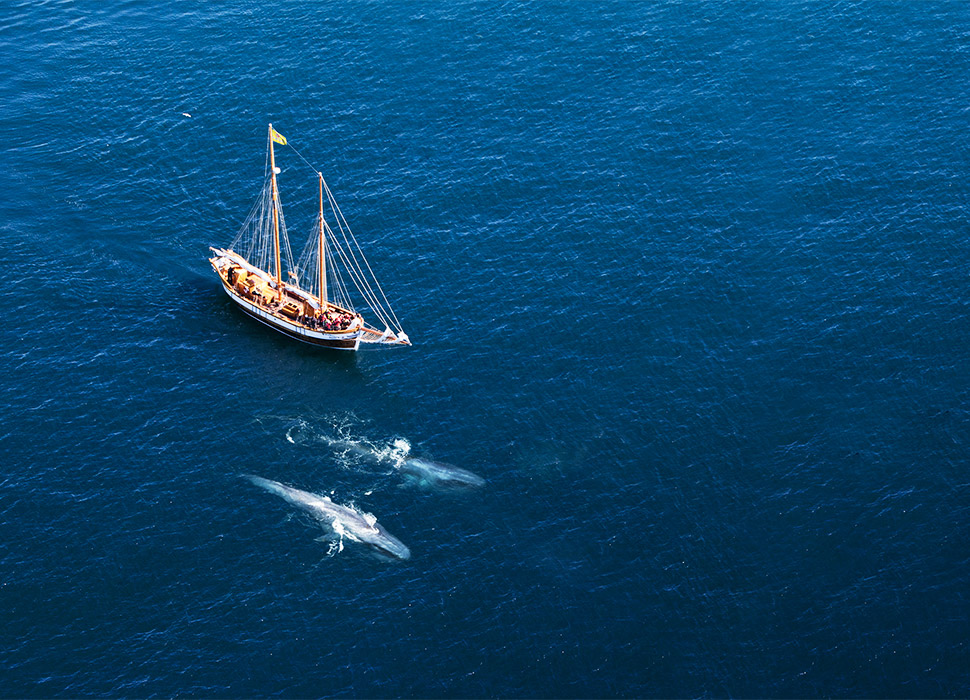 The big dogs of the deep sea need to consume a hefty four tonnes of krill every single day. That’s roughly half a million calories each and every mouthful. Iceland’s rich seas offer just such an abundance, but it’s impossible to tell exactly where or when these mighty gluttons will appear. 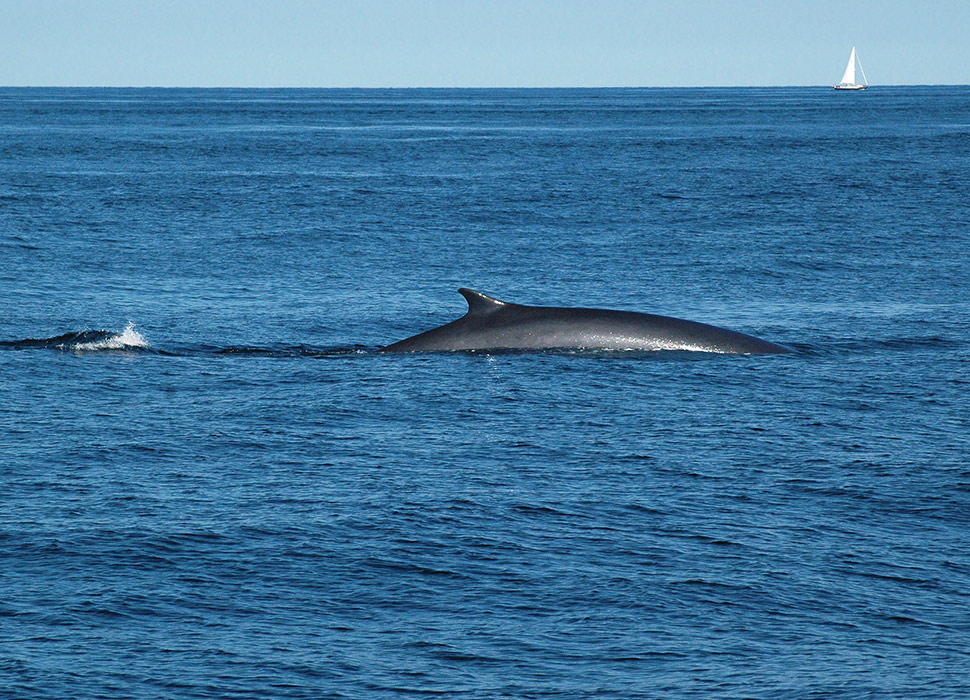 The second biggest whales are frequent summer visitors to the waters off Iceland’s northern coast. Growing up to 27m in length and weighting in at a hefty 48 tons, they were once upon a time a favourite target of whalers. So fair enough if they’re a bit shy these days. 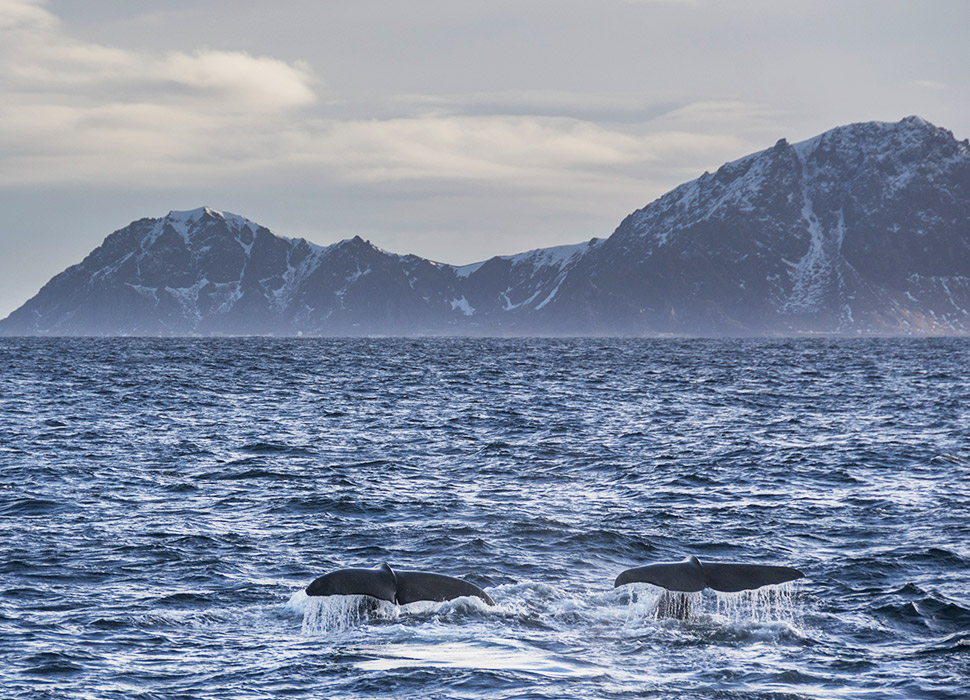 On the hunt for colossal squid, probably / Image: Adobe Stock

The sperm whale – also known as a ‘cachalot’ – likes to hang out in westerly Breiðafjörður Bay, where the water is deep enough to hunt. They not only possess nature’s biggest brain, but they’re also the loudest animal on earth, yelling at 230 decibels. Pretty punchy considering a jet aircraft makes a mere 150 decibels. 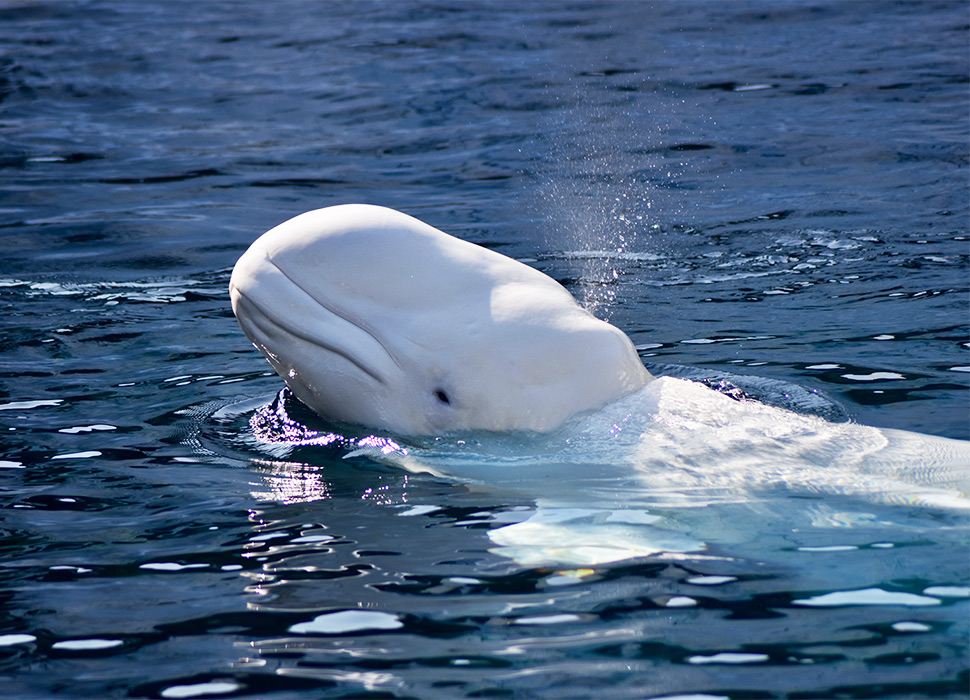 Nicknamed ‘the canaries of the sea’ for their mimicry skills – they can even do human voices – these ginormous pale dudes don’t have a dorsal fin, which helps them swim below sea ice. They're rarely seen around Iceland, but two live at a sanctuary on Heimaey Island in the Vestmannaeyjar archipelago. 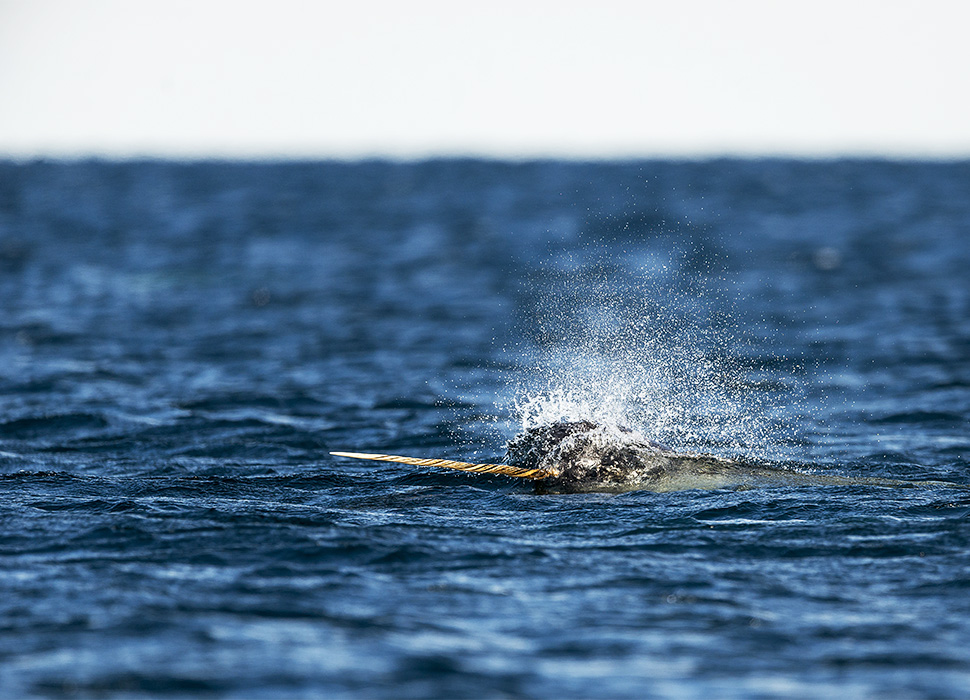 A narwhal pops its tough appendage above the surface / Image: Adobe Stock 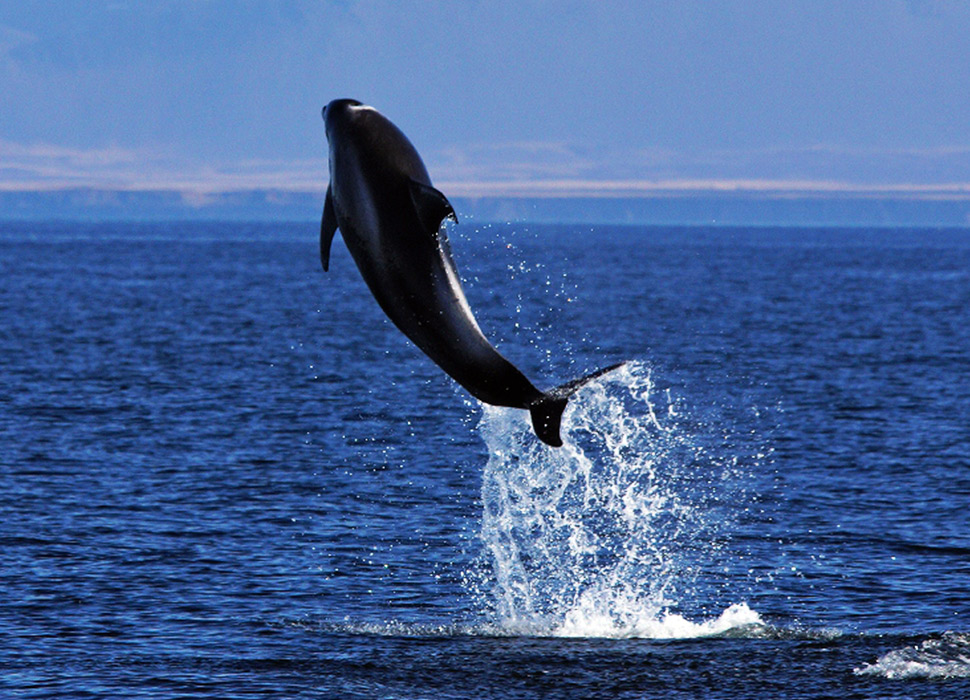 The most common dolphin in these parts is spotted all year around the Icelandic shoreline. They’re easily identifiable by their tall, curvy dorsal fin and – you’ll never guess – a natty white ‘beak’ around their chops. Look out for pods of up to a hundred frolicking at the surface. 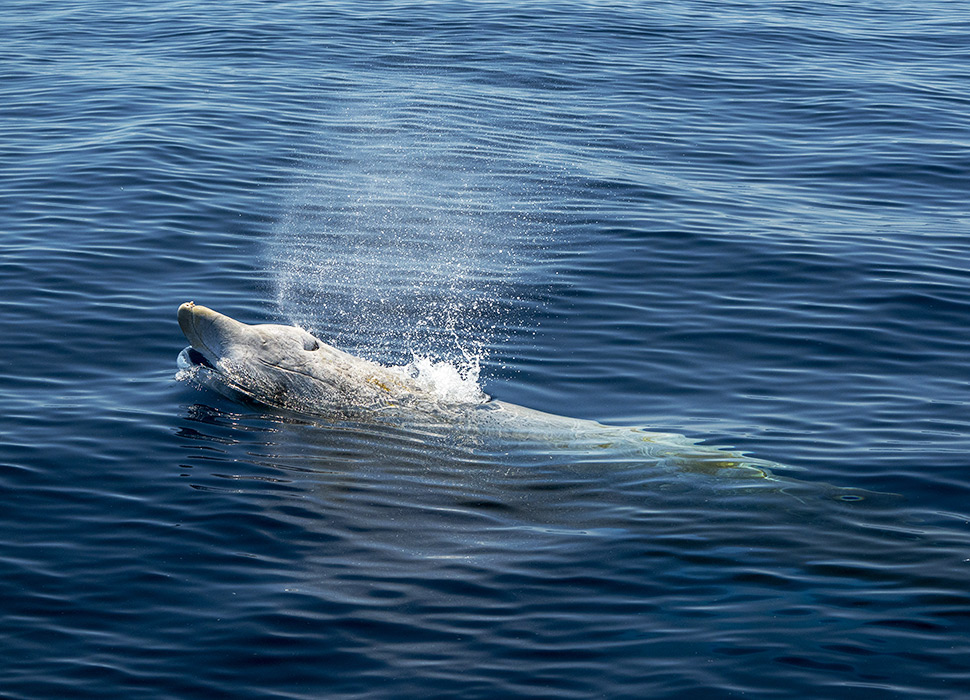 Tom Daley's got nothing on this guy / Image: Adobe Stock

The undisputed record holder for the whale world’s deepest diver, this occasionally spotted deep-sea specialist is said to plunge almost 3,000m into the inky darkness, and can stay under for three-and-three-quarter hours. Truly a breathtaking specimen.

Which tours should I book? 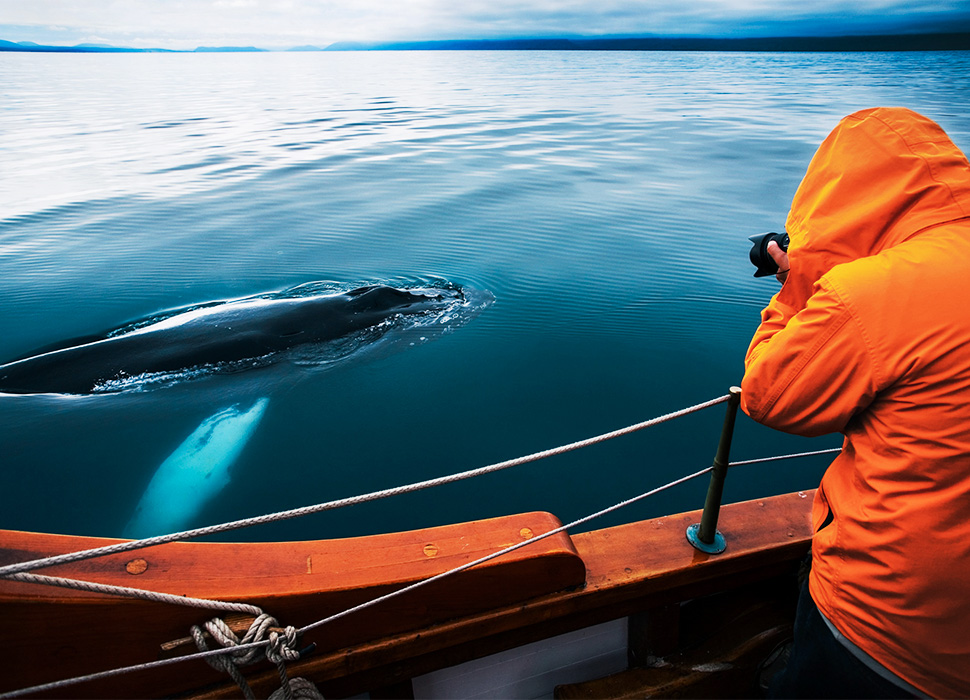 Operators abound for whale-watching, so which should you pick? We've rounded up a pod of the best:

North Sailing
Underline your whale-friendly eco credentials with a carbon-neutral, silent, electric boat, courtesy of this outfit sailing from the whale-watching capital of Húsavík.
northsailing.is/tour/silent-whale-watching

RIB Express
Feel the need for speed on this nippy 12-seater Rib boat with comfy shockproof seating. At 23 knots this two-hour jaunt from Reykjavik doesn’t hang about, and if you don’t see a whale, the next ride is free.
specialtours.is/tour/rib-express 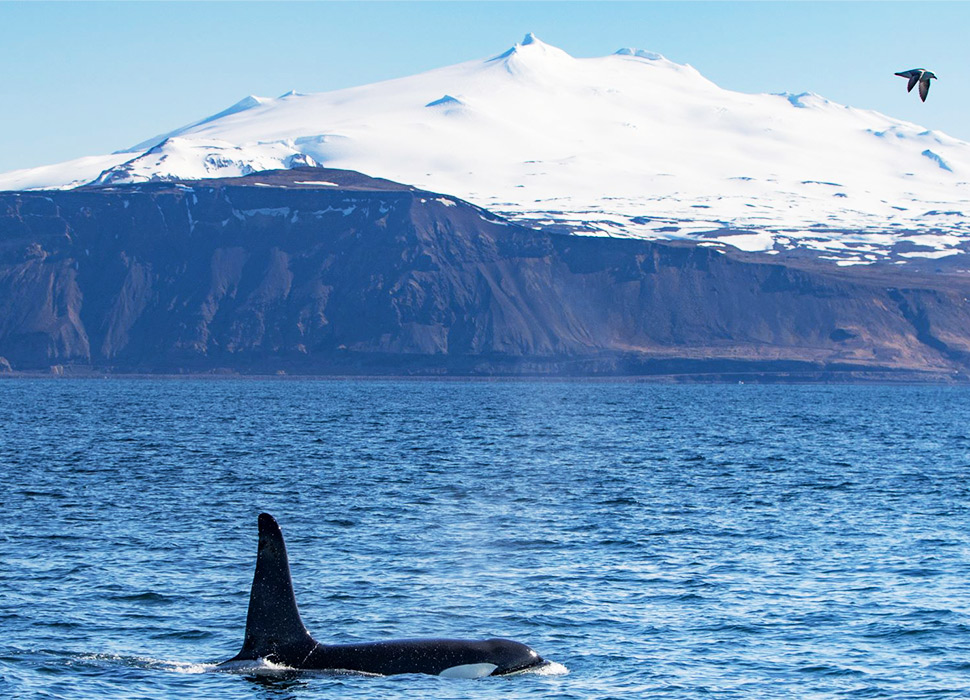 Láki Tours
Get out on the waters around Ólafsvík, a small town on the northern side of the Snæfellsnes Peninsula, and experience orca life up close and person with professional guides.
lakitours.com/our-tours/whale-watching-olafsvik

Hauganes Whale Watching
Iceland’s most venerable whale-watching company – which has ferried delighted punters on the water since 1993 – boast the most experienced skippers around, whose families have fished these waters for generations.
whales.is

What other critters should I look out for? 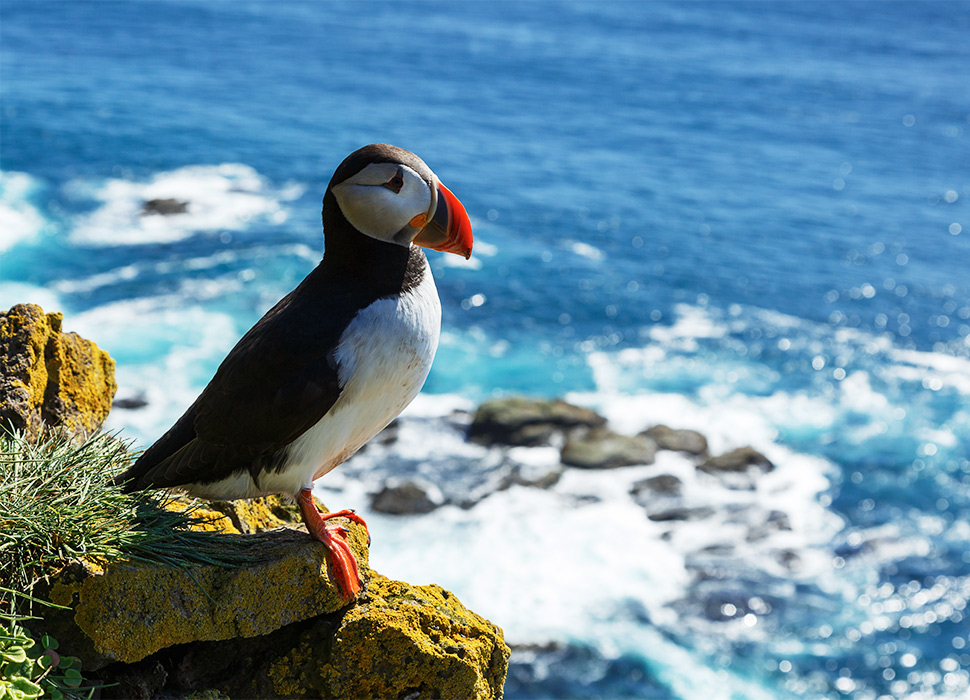 Puffin at the cliffs of Latrabjarg, Iceland / Image: Adobe Stock

There’s a good chance on your whale-spotting trip you’ll see a gigantic basking shark sashaying around at the stately pace of an apex predator, looking constantly surprised despite having been around since the dinosaurs. Plenty of whale tour guide operators also chuck in puffin-spotting stops, so you can nab a photo op with everybody’s favourite dapper little fish-fancier.

If you’re a bit done with boats then head inland for an encounter with the cute-as-buttons Arctic fox, Iceland’s only indigenous mammal and the most adorable furry critter you ever did see. Your best chance of catching one is out on the Westfjords – bear in mind their coats cleverly change colour to suit the season, from pristine white in the wintertime to a fetching Farrow & Ball grey after the summer thaw.

If chasing birds is more your thing, the mythic-sounding gyrfalcon is the national bird and can be spotted around Reykjavik, but for best results head northeast to Mývatn lake where this pointy-winged polar raptor likes to feed on luckless tiny mammals. If you’re travelling with kids, tell them to keep an eye out for selkies, the legendary hybrid of seal and human – basically a less wussy mermaid.