An Icelandic road trip is a technicolour feast for the eyes / Image: Adobe Stock

Should I visit Iceland in summer or winter?

THE LAND OF FIRE AND ICE IS A COUNTRY OF TWO HALVES: SUMMER AND WINTER. HOW TO CHOOSE BETWEEN THE MIDNIGHT SUN AND THE NORTHERN LIGHTS? VOLCANIC LAKE SWIMS AND 26 DAYS OF CHRISTMAS? HERE ARE THE ISLAND’S BEST BITS ACROSS BOTH SEASONS

An Icelandic road trip is a technicolour feast for the eyes / Image: Adobe Stock

Irrespective of when you visit, the Icelandic capital has oodles of distractions. These are the best things to do in Reykjavik.

When you built up a taste for adventure, take to the island's northern stretches and try driving the Arctic Coast Way.

WHY SHOULD I VISIT IN SUMMER? 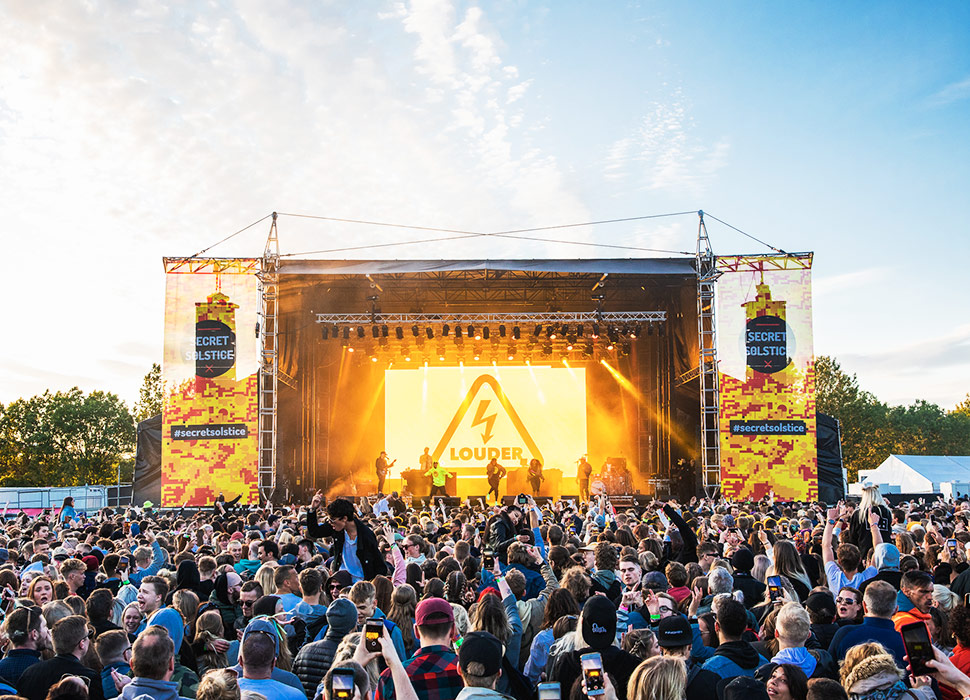 Dancing the day (or night?) away at Secret Solstice / Image: Ivar Eythorsson

1. The sun stays up all night at Iceland’s answer to Primavera

Non-stop sunshine, lurid pop tangents and EDM cave echo? Iceland's Secret Solstice festival leads the charge as the most unique music festival out there. Taking place over a weekend in late June on the fringes of Reykjavik, expect midnight sun and a genre bending line-up – this year's saw Cypress Hill, Patti Smith and Stormzy, for example, plus a slew of Icelandic hip hop acts and DJs. Where else can you pull on a hard hat and join a (serene) rave under neon-speckled stalactites in a lava tunnel? 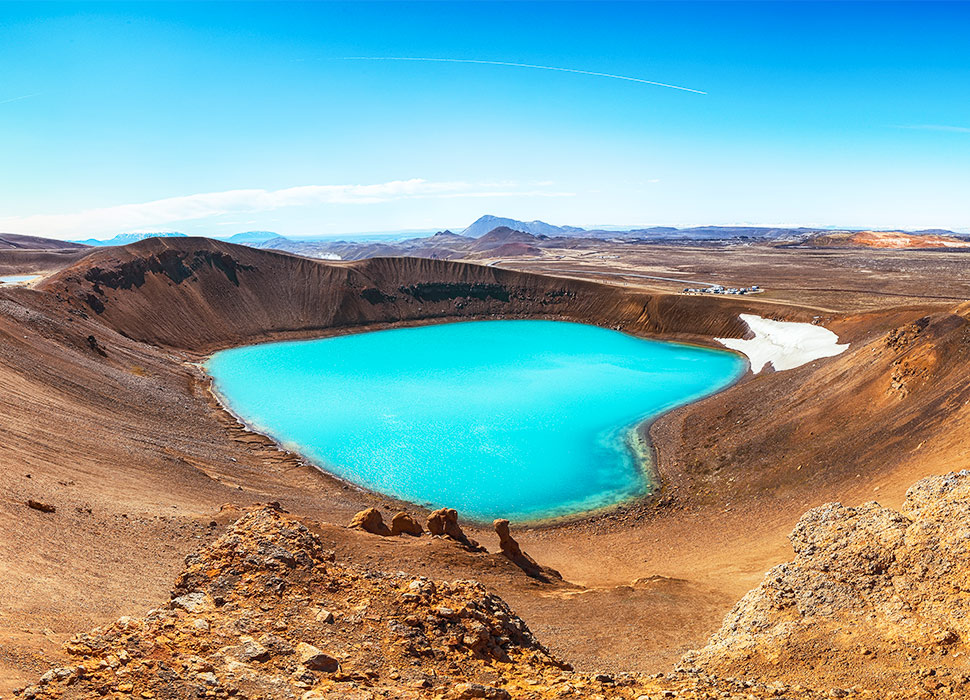 2. Locate a volcanic lake warm enough to swim in

Wild swimming: everyone’s at it. But not in an extreme, otherworldly way. Head to Víti, a geothermal crater lake in the Askja region of Iceland, for the dip of your life. The crater was created by a volcanic eruption in 1875 and the water temp is approximately 25°C, making it a popular swim spot for in-the-know Icelanders. What's more, the languid levels are an opaque, milky-blue colour, 220m deep and surrounded by silky black sand dunes and craggy crater walls. That beats any river, right? 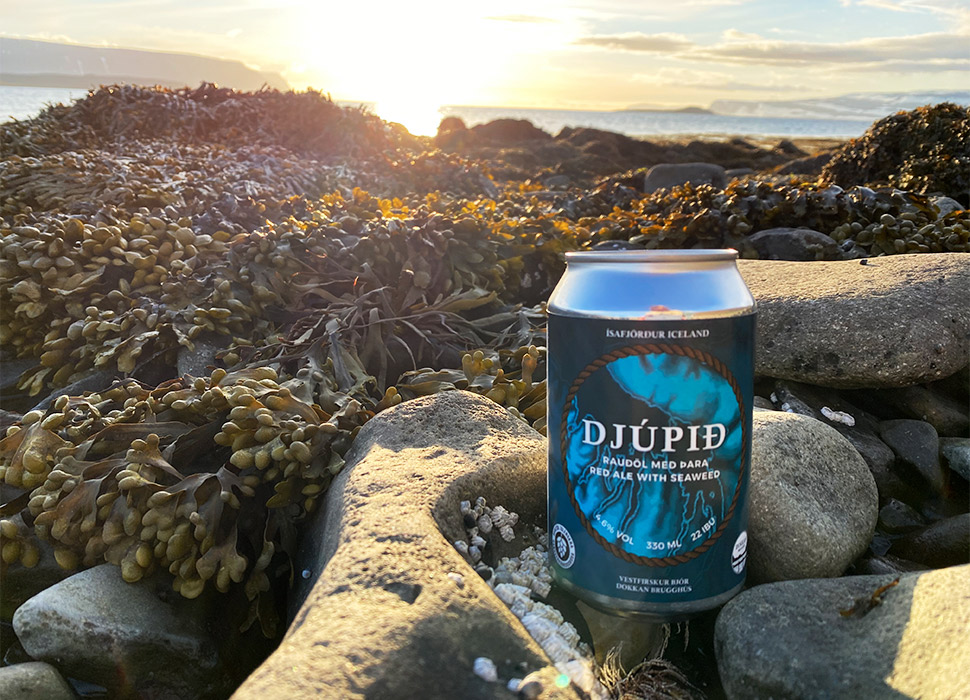 Kelp yourself to a can of Dokkan's seaweed beer

3. Enjoy seaweed beer on the edge of Westfjords

The Westfjords in northwest Iceland is only accessible when the ice melts in summer – and only 10 percent of Iceland’s visitors make the trip up there even then. The region covers a whopping 22,271 sq km, dotted with mighty waterfalls, red sandy beaches and Europe's biggest bird-covered cliffs. The family-run Dokkan brewery opened in 2017 purely to quench the thirst of the local community. Using water naturally filtered through 14m-year-old lava ash they produce pale ales, seaweed-infused beer and a tasty mango milkshake IPA. 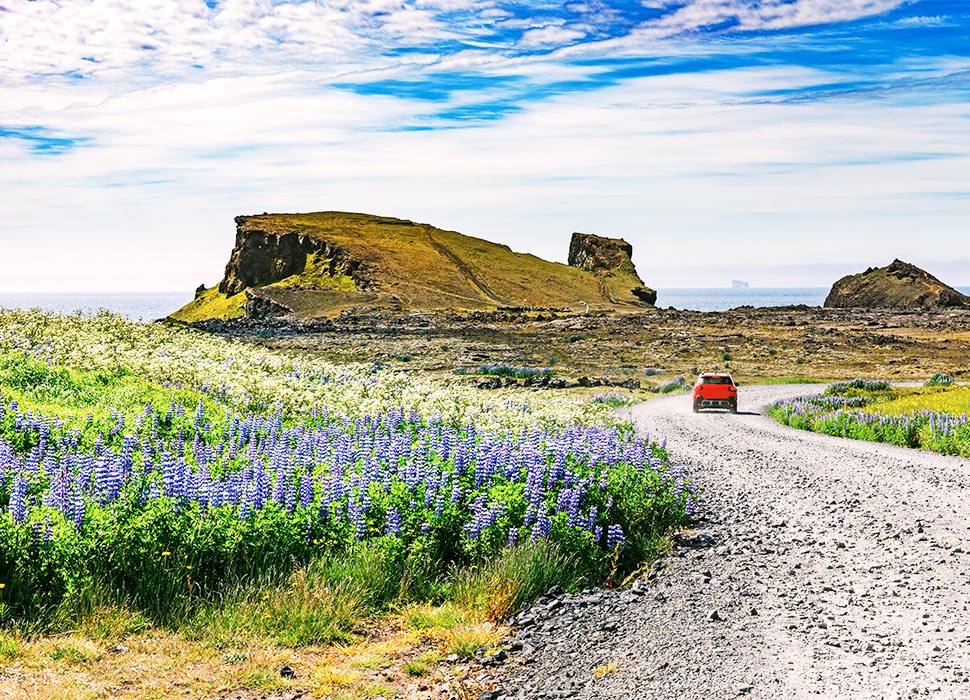 4. Play 'I spy' on an Icelandic road trip

It's par for the course for any visitor to Iceland to take a road trip into the island's drop-dead-gorgeous wilds. Hire a car and avoid coach cramp and you’re already winning. Three of Iceland’s essential sights – Gullfoss waterfall, Geysir and Thingvellir National Park – are within easy reach of Reykjavík, on a 306km loop of (mainly) coastal road known as the Golden Circle. The scenery is at its best in summer when the snow melts inland and runs down towards the ocean, creating spectacular torrents of water. 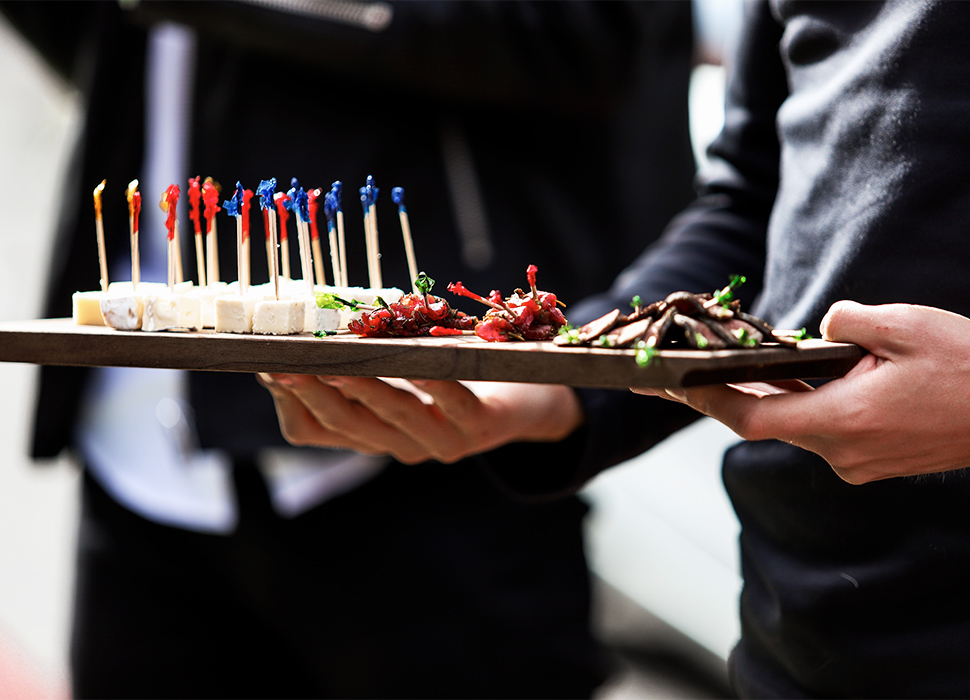 Snaffle some of Reykjavik's best bites on this city walk

5. Taste an entire city on the Reykjavik Food Walk

A food walking tour, done well, is one of the best ways to explore a city. On this carefully curated meander you'll taste myriad traditional Icelandic bites, from homemade ice cream to slivers of fermented shark on dark malt soda-bread. Look forward to a stop at Bæjarins Beztu Pylsur, a tiny kiosk that’s been serving delicious, heavily loaded hot dogs since 1937. The tour guides (Dan, Ben or maybe Eyglo) have oodles of enthusiasm and will happily point out local landmarks such as Parliament House and the spiky, expressionist Hallgrimskirkja church along the way.

WHY SHOULD I VISIT IN WINTER? 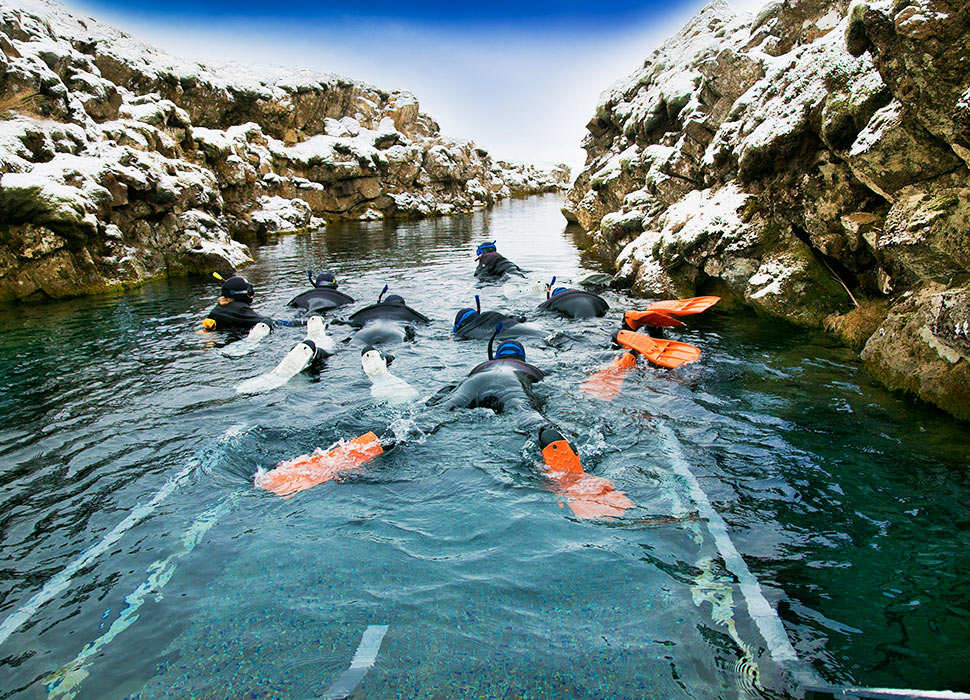 Get chilly at a break in the world / Image: Alamy

1. Snorkelling the Silfra fissure is even more bracing

Enjoy snorkelling in coral-crammed tropical waters? The indulgent ease of it! In Iceland, the bravest folk snorkel the Silfra fissure in Thingvellir National Park and they do it in winter. This ice-cold body of water sits between the tectonic plates of two continents (North America and Europe) and is -1°C in December. What’s the allure? The visibility exceeds 100m with fish, neon-hued algae and lava rocks on show. Pull on a dry suit, hop in and feel alive. 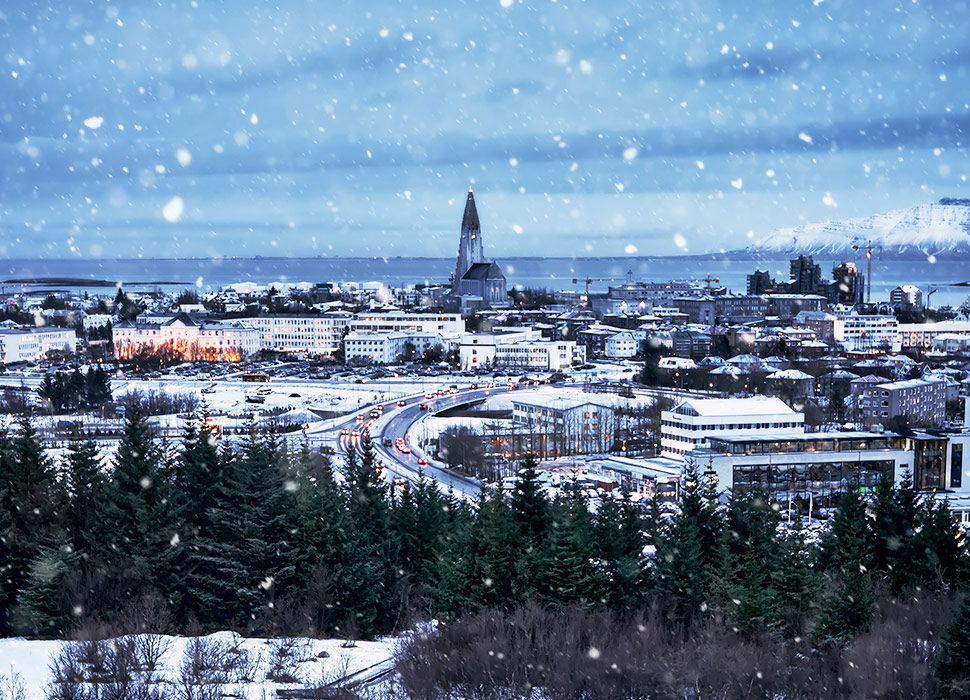 2. Christmas lasts for 26 days up here

Upgrade the 12 days of Christmas to 26 days in Iceland. From 11 December till 6 January, the country gets festive in clouds of elf dust and gingerbread spice. Here they have not one, but 13 Santa Claus proxies (aka the 'Yule Lads' – honest to God – or 'Jólasveinar') and a Christmas cat. To add to the magic, snowfall is pretty much guaranteed and you can spend days visiting glittering ice caves, glacier hiking or mooching around festive markets under strings of twinkly lights, while scoffing liquorice cakes. The festive season ends reluctantly, with a spectacular fireworks display. 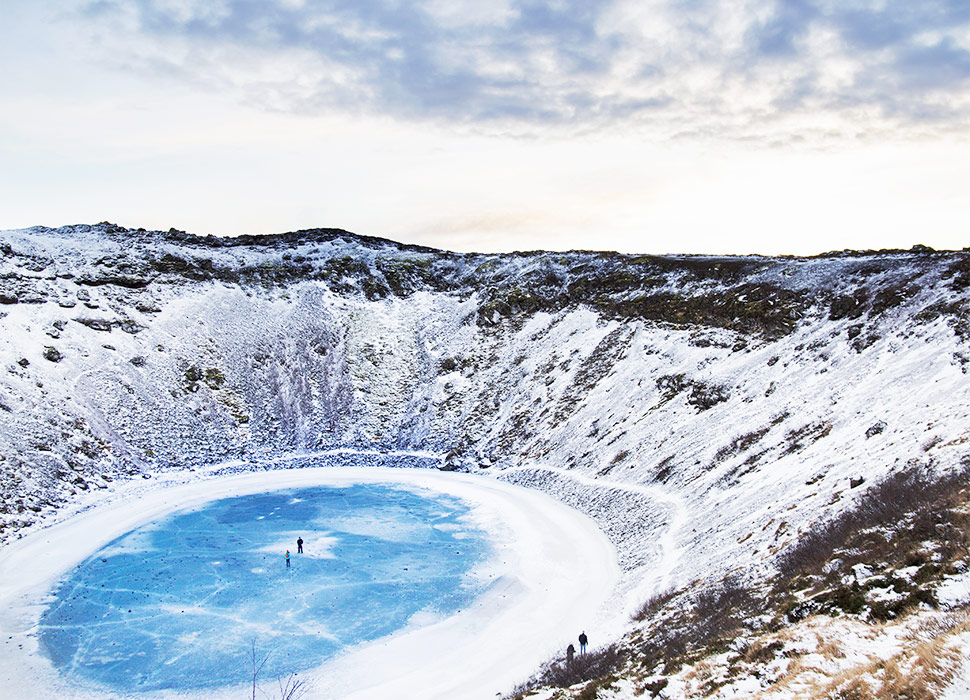 3. Ice skate on the surface of another volcanic lake

What’s winter without an obligatory ice-skating sesh? Nothing, that's what. In Iceland though, swap skiddy laps on a crowded city rink for the frozen surface of a 3,000-year-old volcanic lake. Kerid Crater Lake in southern Iceland is eye-poppingly sapphirine, and each winter it freezes over to form a giant ice rink for adventurous locals and tourists to enjoy. The lake is on the Golden Circle route, roughly an hour’s drive east from Reykjavik. 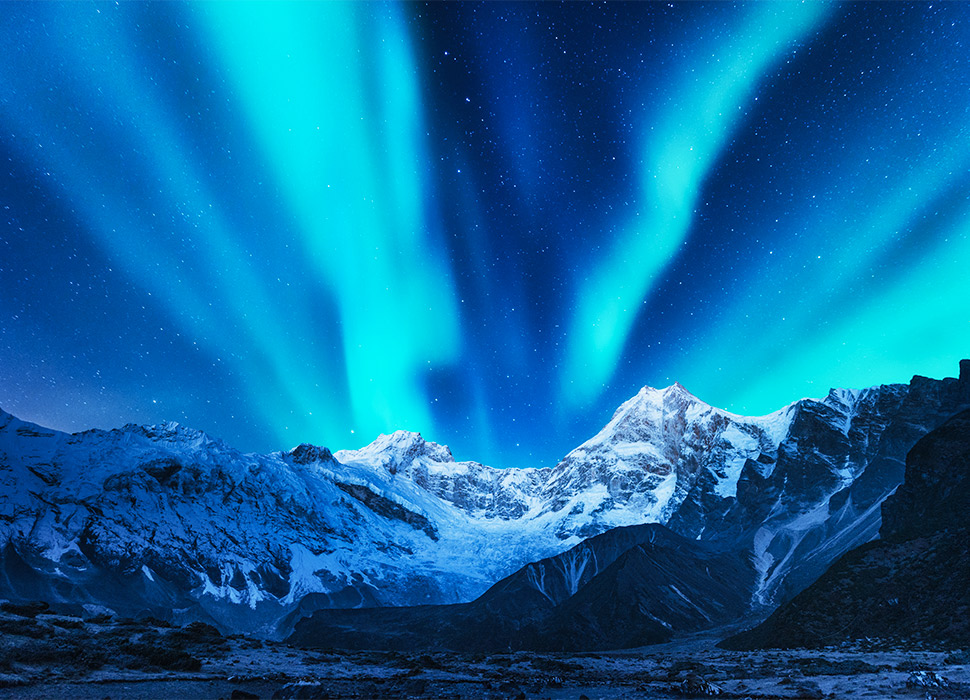 4. The Northern Lights are utterly bananas in winter

Allow yourself to get excited about seeing the Northern Lights in Iceland. Why? Because the chances of seeing this bonkers natural light show (also known as aurora borealis) are high. For starters it's easy to get to a dark place, what with only 300,000 residents scattered across an island that's half the size of the UK. Iceland sits at 65° north, on the southern edge of the Arctic Circle, meaning you can see them almost every night and in slightly warmer climes than in Scandinavia. Peak viewing season is September to March. 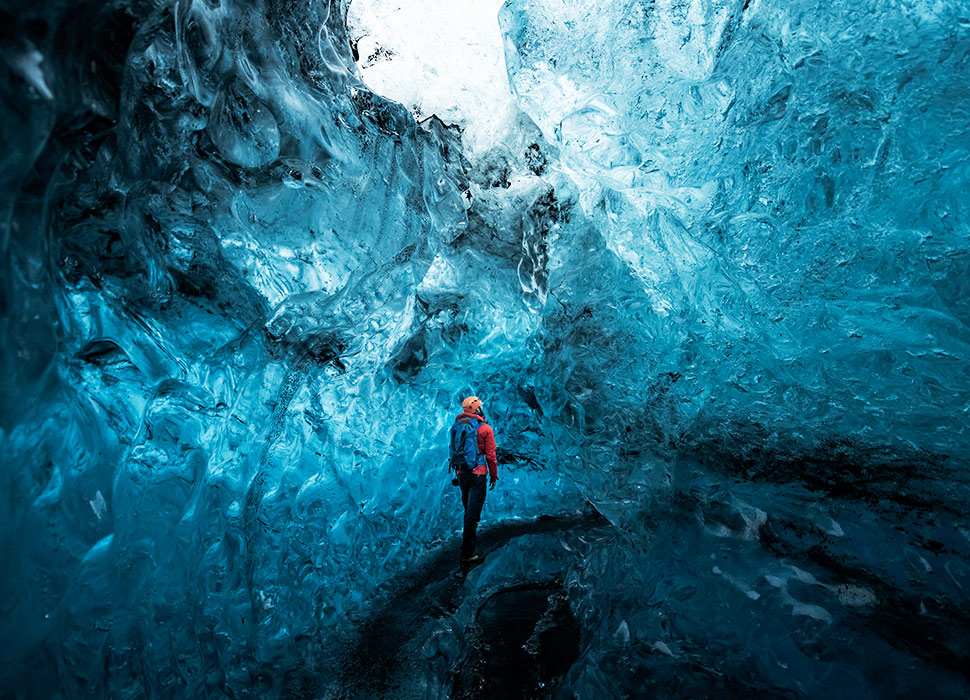 5. Find the deep freeze and go ice caving in a glacier

Exploring Iceland’s spectacular ice caves is a winter must. The best are inside Vatnajökull (the largest glacier in Europe) and Langjökull (the second largest) in the south. These magical blue-tinged caverns are accessible from mid-November to early March and are naturally formed each year as the glacial meltwaters freeze. This means every cave is unique and will constantly change shape and colour. To stay safe, join a guided ice cave tour rather than going rogue.