Sand man: Stuart in Húnaflói Bay by the Hvítserkur rock formation / All Images by Johan Lolos

The Arctic Coast Way is a new driving route around the northerly edge of Iceland, taking in endlessly beautiful scenery and plenty of surprises. Who better to try it out than a man who’s just passed his driving test? Stuart Heritage takes the road less travelled

Sand man: Stuart in Húnaflói Bay by the Hvítserkur rock formation / All Images by Johan Lolos

Four hours north of Reykjavik, we’re winding our way through mountains at dusk, when Johan the photographer suddenly shouts “WOAH.” And there it is, just off to our right – the rear end of a car poking out from a roadside lagoon. It is, by all accounts, the last thing I needed to see.

Some context: I have just passed my driving test. I left it late – I waited until I was a 38-year-old father of two before taking lessons – and so far my greatest driving achievement involved going three towns away and back in the same evening: a feat of endurance that I celebrated by pumping my fists and whooping like a tennis champ. 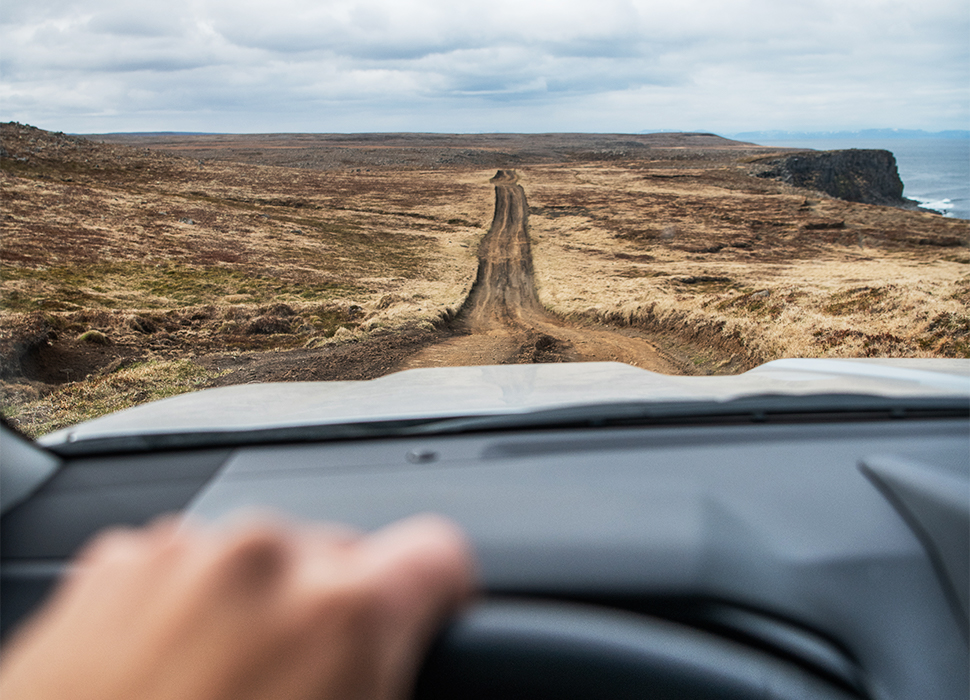 Cruising along the northern coast

But now here I am in Iceland, trying to navigate a car the size of my house around the northernmost rim of civilisation, on the wrong side of the road, on a gravel track, a maximum of ten inches away from watery doom. No pressure, Stu.

I’m here to sample the Arctic Coast Way, a 900km stretch of the country’s northern coastline which offers spectacular scenery and almost absolute solitude. While many visitors to Iceland will hurtle around its ring road, snaffling up all the big-ticket sightseeing opportunities like a greedy kid at an unattended pick ’n’ mix, the Arctic Coast Way offers something a little more leisurely and diverse.

Looping out across the peninsulas that splash upwards towards the Arctic Circle, the ACW links together a number of isolated rural communities whose charms have long been ignored by the country’s booming tourism industry. How remote are we talking? Take a look on Google Maps; you can see the exact moment when the Street View car made a start, thought ‘nah’ and gave up. 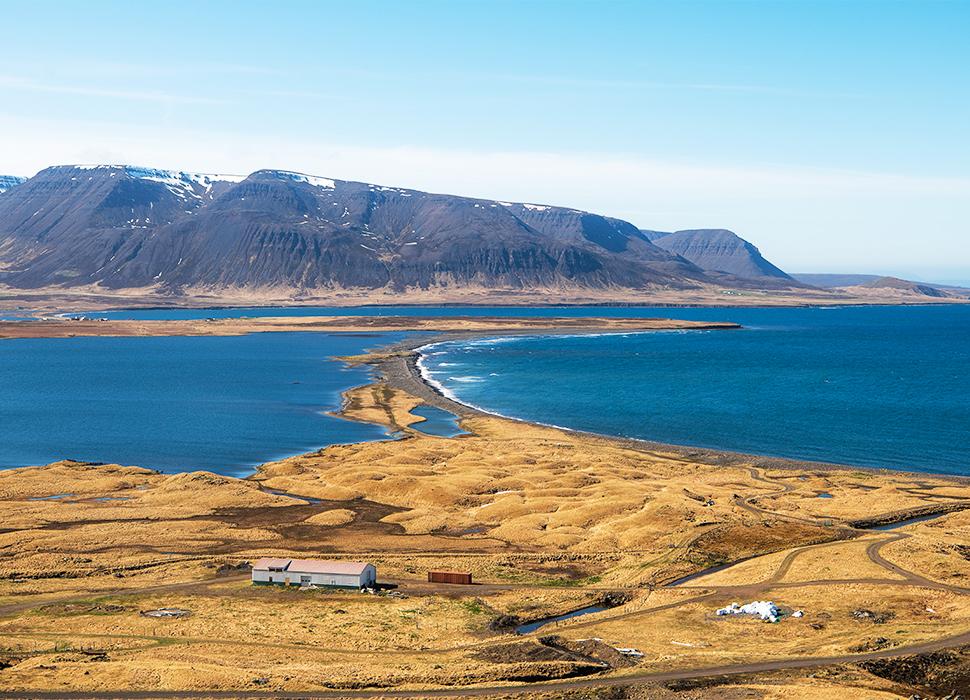 Looking out over the Troll Peninsula

So, as you’d imagine, my nerves are shot. Especially because the roads on the first two peninsulas – Vatnsnes and Skagi – take the form of an unbroken gravel track. It dips and weaves and pitches and skids, often mere feet away from perilously unguarded cliff edges. Wildlife is scarce. People are scarcer. You can go hours without seeing another car, and it doesn’t escape my attention that one lapse of judgment could result in us plopping into the sea completely unnoticed.

But at the same time, this is the route’s big plus. Pull up and explore the coastline – maybe to check out an alien rock formation or watch a herd of seals bobbing by a black sand beach – and the tranquillity is overwhelming. Stand still for even a second and everything drops away but the sea, the breeze and the terns that flit about unbothered in the sky. The quiet is expansive. It’s obscene. It’s almost enough to make you forget that to get there, you had to play a three-hour real-life high-stakes version of Super Mario Kart’s Rainbow Road course. 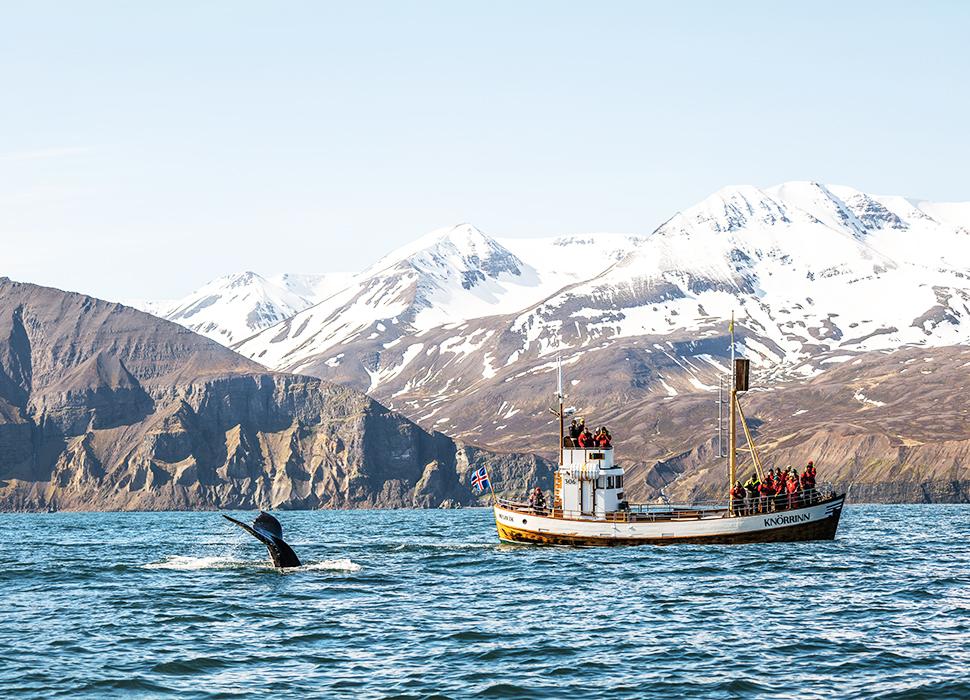 The communities that formed in the pockets of this wilderness have a tendency to mutate a little. In the middle of Skagaströnd (population 482), you will find an old Nissen hut that once served as a World War II medical barracks. It is now Spákonuhof, the museum of prophecies. Here a delightful septuagenarian by the name of Sigrún Lárusdóttir will growl and hunch and boggle her eyes as she completely inhabits the story of Þórdís the prophetess, a 10th-century local woman who was killed in what can only be described as a supernatural cattle dispute. Sigrún will read your palm, too. She read mine, and told me I am honest and sensitive but often stubborn, which made me cry and refuse to believe her.

Still, nothing on this part of the journey could prevent me – a man who still breaks into a flop sweat upon entering a moderately busy supermarket car park – from feeling like I’d bitten off more than I could chew. The roads were more challenging than anything I’d faced at home, and I ended the day exhausted and defeated. Johan, a backpacking photographer who thrives on this sort of adventure, attempted to gee me up with a video of him driving the same route in winter, in a white-out blizzard. The message was clear: if he could navigate the route blind, I should probably be OK in perfect conditions. 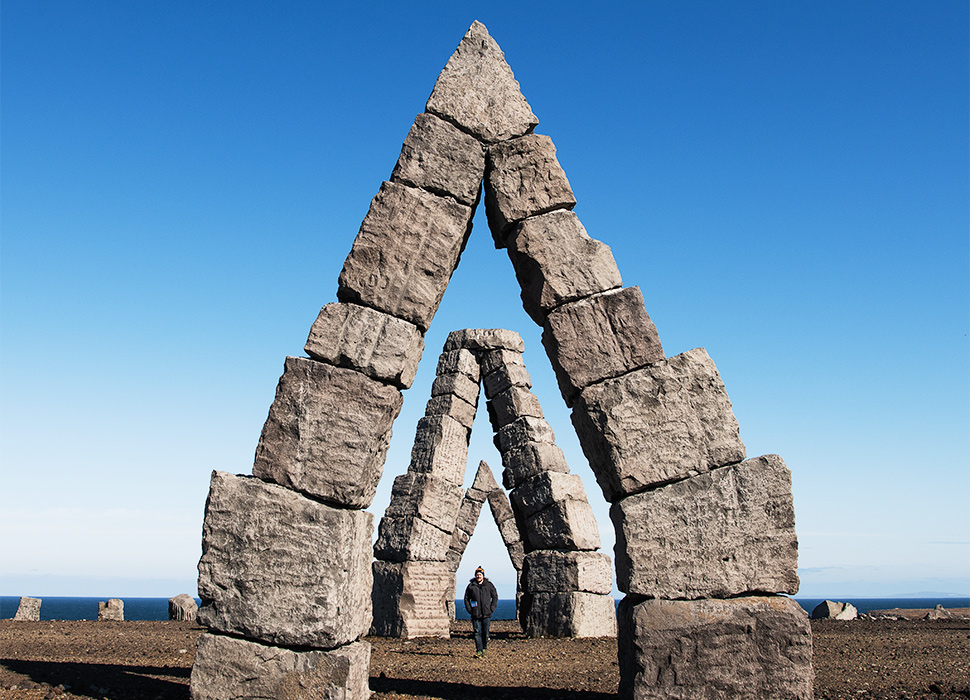 The Arctic Henge in Raufarhöfn rocks

With day two came Tröllaskagi, the next peninsula. In a sense this was easier because, dear lord, Tröllaskagi is gorgeous. It’s filled with endless snow-striped mountains, and flocks of ocean-skimming seabirds, and clutches of bushy-maned horses. Even the colours are incredible. About 400 different shades of blue are constantly scrabbling for attention among the greens of the hills and the perfect whites of the snow and the waves. More importantly, Tröllaskagi understands the joys of tarmac, so you experience a much smoother ride as you cling to the corners of lakes and soar up twisting mountainous roads. It’s still no cakewalk – you try concentrating on the road when you’re surrounded by such constant beauty – but the whole experience does manage to bolster my confidence a little.

Halfway up the third peninsula is Húsavík (population 2,307), billed as the 'Whale Capital' of Iceland. Stefán Guðmundsson’s family has lived in the area for 150 years, and he has run the Gentle Giants whale watching company for the last 18, although he notes that the biggest whales have only been seen in Skjálfandi Bay for the last 16. Thanks to the changing climate, the bay now houses up to 40 humpback whales at a time, as well as porpoises, orca, minke whales and sometimes even blue whales. “It’s a luxury problem,” he admits, “trying to choose which whales to show people.” It’s certainly exhilarating, flying through the freezing ocean on a rib past thousands of puffins as humpbacks fluke their tails high into the air all around you, and the success of the venture proves it. Gentle Giants runs 20 trips a day, and they sell out all summer long. “Business is good,” Guðmundsson nods, while grinding a lump of chewing tobacco on his lap. 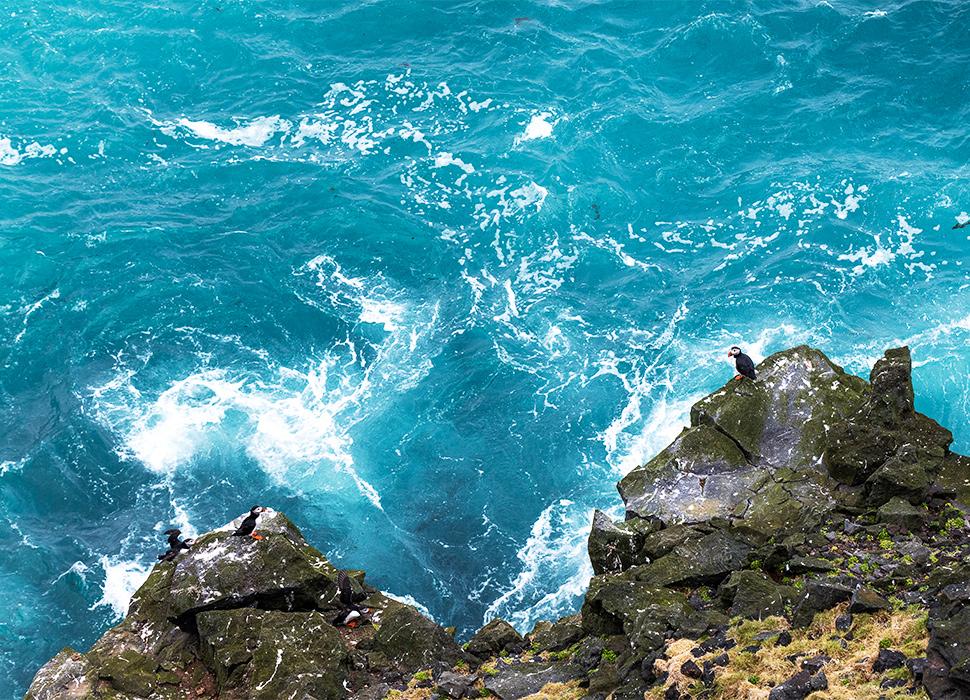 Nature's colours seem to intensify at certain points along the path

From there, the landscape changes again, dipping to sea level and alternating between scrubby wildernesses and lush green farmland. Our reward at the end is a night in Ytra Lón on the easterly Langanes peninsula (size: 155 square miles; total population: 480). In many ways, Ytra Lón is the perfect distillation of the Arctic Coast Way – it’s remote, simple and just a little bit weird.

Here, Sverrir Möller tends to the farm he partly built from the driftwood that washes ashore from Siberia, while his wife Mirjam and daughters Karlotta, Janneke and Hugbjört run a small and startlingly coloured guest lodge where visitors can cook meals with meat from the farm and fish from the river.

After shepherding his 500 sheep into the warm at the end of the day, Sverrir shows me a pen, and points to a lamb. How old is it, I ask. “Five minutes,” he replies. “There will be another along soon.” He tells me how the lambs will be raised, and how they’ll spend four months of the year grazing in the open on the mountains. He tells me about the eider ducks he protects from mink, and the 40-year project to grow a forest on his land. I ask him what he thinks of living in such a remote part of the world. “Ah, I am not for the city,” he sighs. The second lamb is born right in front of me with minimal fuss, and I make a mental note to bring my family here as soon as I can. 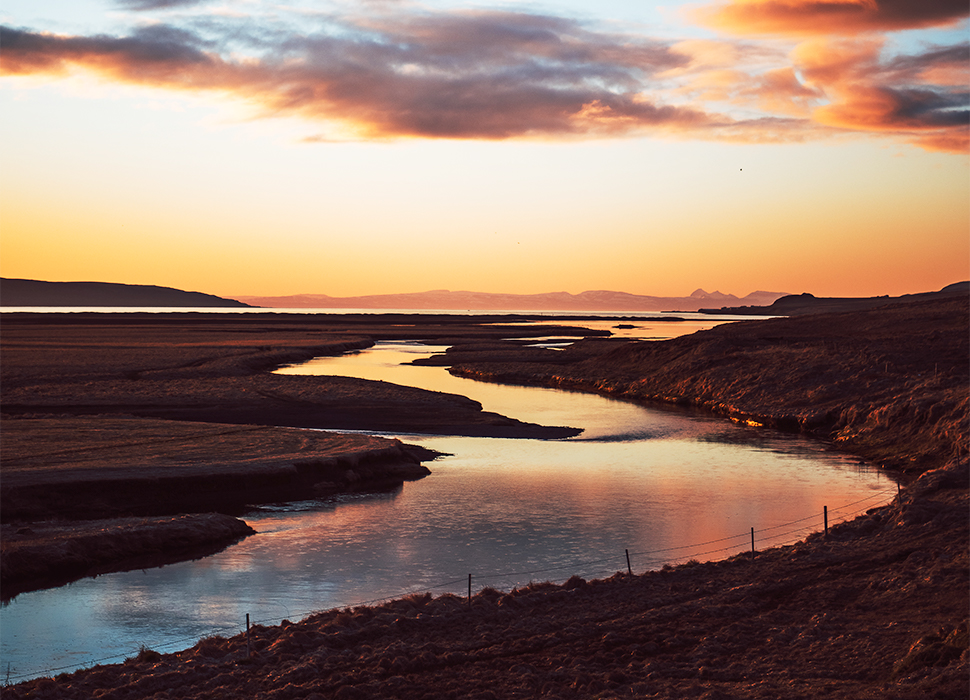 Sunset along the Arctic Coast Way

By this point, I had fully fallen for the charms of the Arctic Coast Way. Clustering all of Iceland’s tourism around a single ring road is madness. If you don’t travel north, you miss out on so much. The scenery, once you detour up here, is preposterous, the people are terrific and – yes, fine, I’ll admit it – the driving is actually a lot of fun.

I’m pleased I had Johan with me for the trickier parts – like the terrifying rock-strewn mud paths of the very east – but, by the end of the trip, everything had clicked into place. Far from seeing the Arctic Coast Way as a test I was doomed to fail, I soon began to relish every twist and dip in the road. Being the only car in sight as you whoosh along a mountain road at sunset, surrounded by pink clouds and dark blue water is exactly as magical as it sounds. I ended up enjoying it so much that, on our way back, I swung off on a diversion to visit a boiling mud pit just to get some extra time on the road.

It isn’t cheap – for the money it costs to fill a Toyota Land Cruiser with Icelandic diesel, you could quite easily afford a deposit for a three-bed semi – but it is mind-meltingly beautiful. I’ve proved to myself that I can drive in Iceland, and I’m now desperate to return. Then will come the real challenge: driving in Iceland with two kids in the back. Wish me luck.