Iceland is a land of hot springs and swimming pools. Reykjavík alone has more than 17 bathing spots, including one of Iceland’s most visited attractions – the Blue Lagoon. There are around 120 more throughout the country and dozens of naturally occurring hot springs, allowing the 340,000 citizens of this bathing-obsessed nation to get seriously wrinkly whenever they desire. 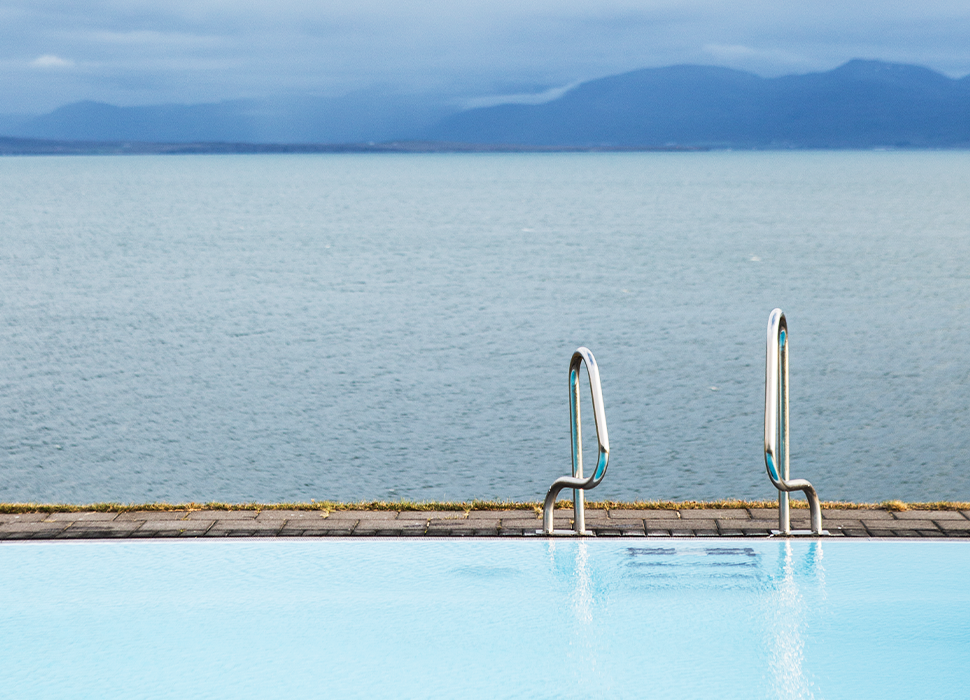 Bathing is part of the Icelandic culture / Image: River Thompson

The culture goes back centuries. In Reykholt, a tiny village north of Reykjavík, there’s a natural hot spring that was written about by the 12th century politician, poet and saga writer Snorri Sturluson (aka ‘the Homer of the North’), who had a tunnel leading from his home to his favourite bathing spot.

It wasn’t until 1937, however, after Iceland began drilling for the geothermal waters that now provide all its energy, that Reykjavík got its first purpose-built swimming pool. Given the long, dark winters, and the act that banned beer of 2.5% and above until 1989, the pool – and especially the hot tub – became the focus of the community.

Except that, unlike drinking pints with pals, bathing in hot and cold water was, and is, actually good for you. And tourists have seen the benefit too, at Iceland’s most famous hot pool, the Blue Lagoon. In 2017 the site underwent a major expansion to ease overcrowding and in 2018 a luxury day spa and five-star hotel opened at the lagoon.

“In the beginning, people thought it was a joke to build such a big pool,” says Sigríður Sigþórsdóttir, lead architect on the Blue Lagoon. “Now, I think they get it.” Here, we meet the Icelanders who live by the mantra: the wetter the better. 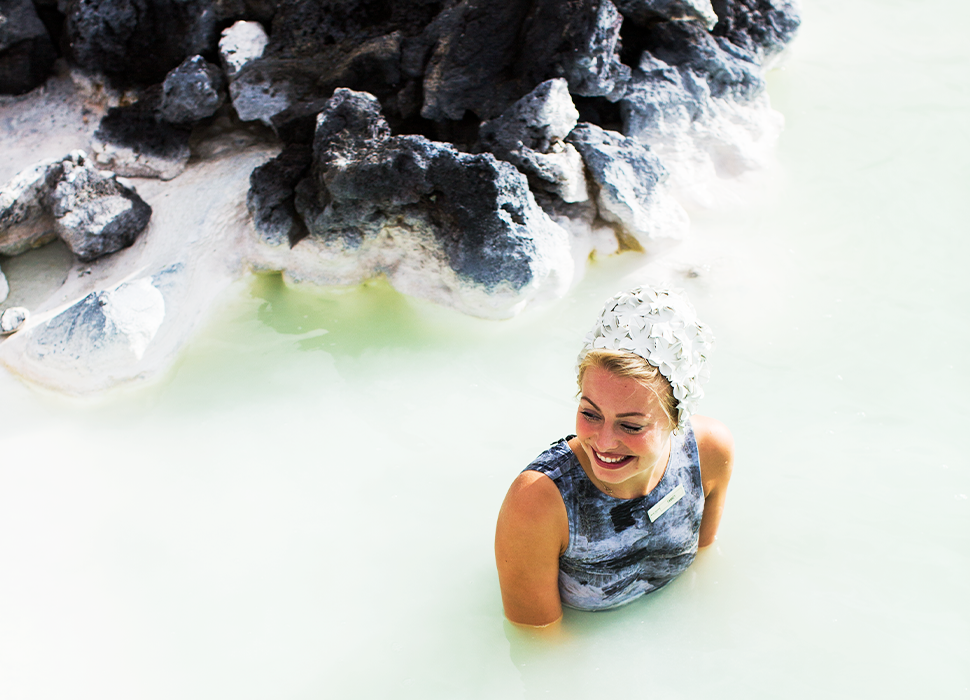 “I’m actually 98, you know.” Fanney Þórisdóttir is explaining the anti-ageing benefits of all the silica, algae and other micro-organisms found in the Blue Lagoon, where she works as an in-water hostess.

A what, you say? Every day, she spends a few hours immersed in the sky-blue water, showing bathers where to get face masks, massages, flotation treatments, skyr smoothies and much more.

In reality, she’s 27, though the mineral-rich pools – pumped from 2,000m below the Earth’s surface – have helped her complexion, she says. “But it’s more than that – just being in the water is like taking a mindfulness tour every day. It’s a pretty amazing office.”

The Blue Lagoon has become the ultimate symbol of hot-water bathing in Iceland. With more than a million visitors a year, you now have to book a time slot well in advance, such is the global demand for a place that National Geographic magazine named one of the 25 wonders of the world.

“It’s mostly tourists who come here from all over the globe, but they’re following a Viking tradition,” says Þórisdóttir. “Everyone’s wearing bathing suits, so it’s very democratic. Floating in the water, we’re all the same.” 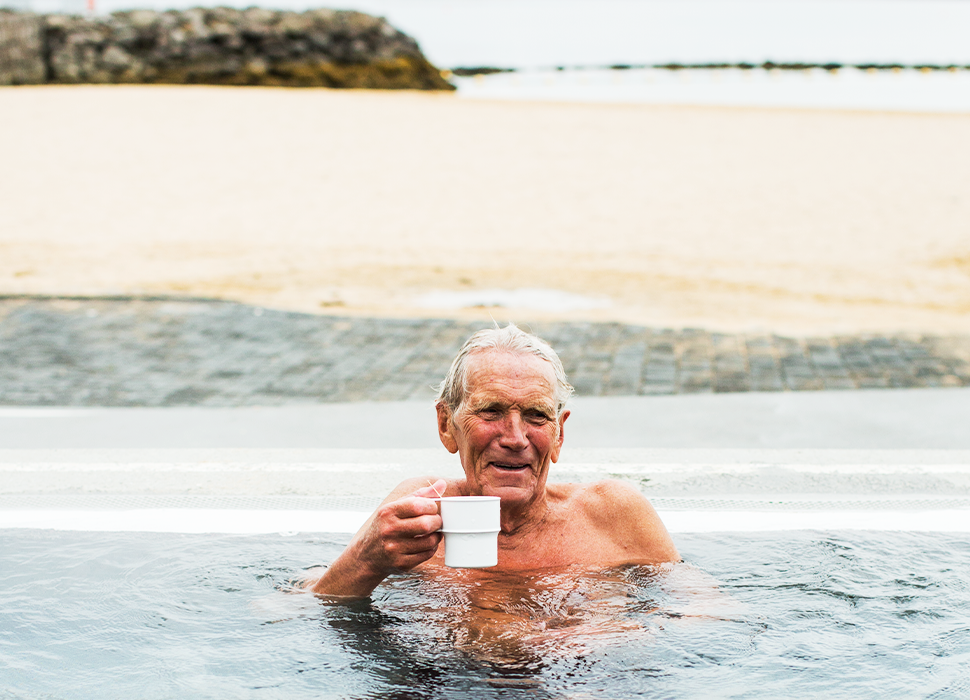 Haukur Bergsteinsson is on a mission to swim every day / Image: River Thompson

Haukur Bergsteinsson can be found every day at the Nauthólsvík Geothermal Beach in Reykjavík, following the same simple routine: a swim of 200m or so from one side of the man-made lagoon to the other, followed by a dip in the rectangular hot bath just off the beach, with a warming cup of tea. “It clears my head and makes me feel great,” he says. “Fresh, alive, happy.”

Since the Nauthólsvík beach was created in 2000, sea swimming followed by a hot bath has become an unlikely phenomenon in Reykjavík – even in winter, when the sea temperature hovers around 7°C, due to the Gulf Stream.

"It clears my head and makes me feel great"

Bathing in hot and cold water has many proven physiological benefits – from improved circulation to muscle-tissue repair – and Bergsteinsson has felt them more than most.

“I was seriously ill when I first started swimming and I swear it helped me recover,” says the octogenarian, who was cheered by a little crowd on the beach when he had his 1,500th swim. “I wasn’t even a strong swimmer before I started doing this – I once got swept away by the tide up north – but now it keeps me alive.” 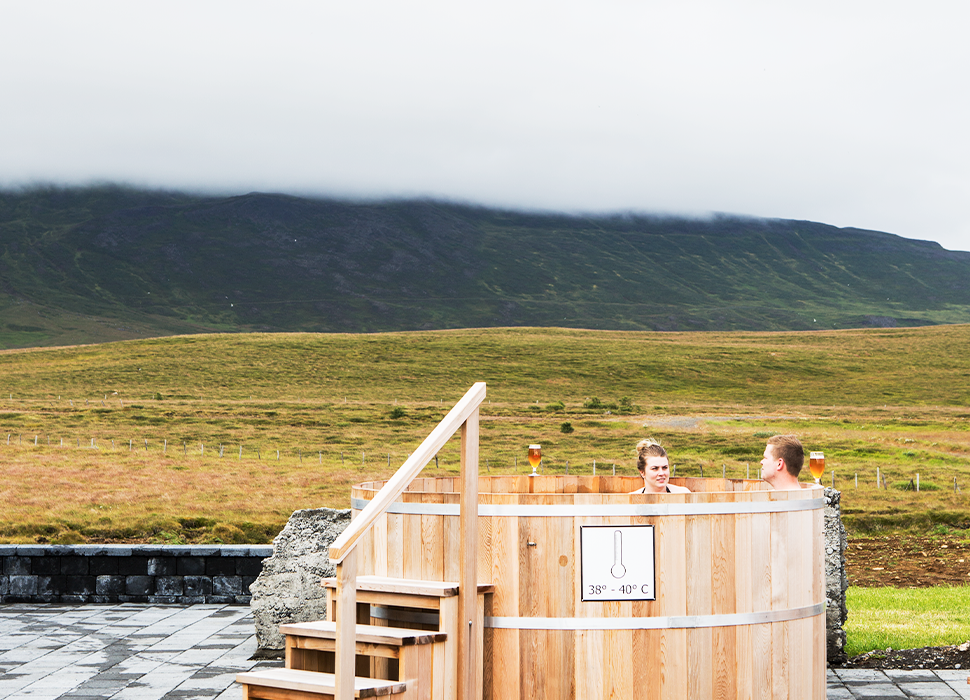 Sigurður Bragi Ólafsson is proud of the beer he makes at Kaldi, Iceland’s first microbrewery. So proud, he invites you to take a bath in it. “Brewer’s yeast,” he says, “is rich in vitamin B, proteins and enzymes. It makes your skin feel smoother for days.”

The beer spa – the first of its kind in the Nordics – opened in June 2017 in the tiny town of Árskógssandur, on northern Iceland’s Eyjafjörður fjord.

“In Iceland we have this amazing culture of healthy bathing”

“It just made sense to do this in Iceland, where we have this amazing culture of healthy bathing, whether in the silica at the Blue Lagoon or the sulphur at the Mývatn Nature Baths,” says Ólafsson, who runs the spa with his wife, Ragnheiður Ýr Guðjónsdóttir.

Their tubs are filled with young beer heated to 39°C. In case you’re thirsty (because you can’t drink the bathwater), there’s a beer tap by the tub, serving Kaldi’s signature brew. “I think a lot of people thought it was a bit of a novelty,” says Guðjónsdóttir, “but when people try it, they realise it really does your body and soul a world of good.”