Rachel Raj and her famous flódni / All images by Gabriel Szabó

Amid a renaissance in Hungarian Jewish culture, one cake is uniting the country. We meet Rachel Raj, the master of this tiered treat, in Budapest

Rachel Raj and her famous flódni / All images by Gabriel Szabó

Budapest’s history is best understood through cakes. First, the frilly, creamy Esterházy torte honoured Hungary’s ruling dynasty in the 19th century and kicked off a confection culture in the capital. Later, the sleek, sturdy Dobos torte baked the might of empire into its caramel and buttercream, impressing Queen Elizabeth of Hungary at the National General Exhibition of Budapest in 1885. Even the city’s ornate Buda Castle – glowing pink in the reflection of the Danube – looks sweet and delicious, like you could drag your knife between its colossal columns and cut a perfect slice.

It was in the shadow of the newly built royal residence that the city’s first Jewish district came to life in the 13th century. With a tolerant king and legal protections, the Jews flourished on Buda Hill, and went on to make a pretty delicious cake themselves: flódni. Rich, complex, and multilayered, this hardy pastry remained a fixture on the Jewish tables of Budapest, even as the Jews themselves were forced out of their homes by nefarious forces over the following centuries. 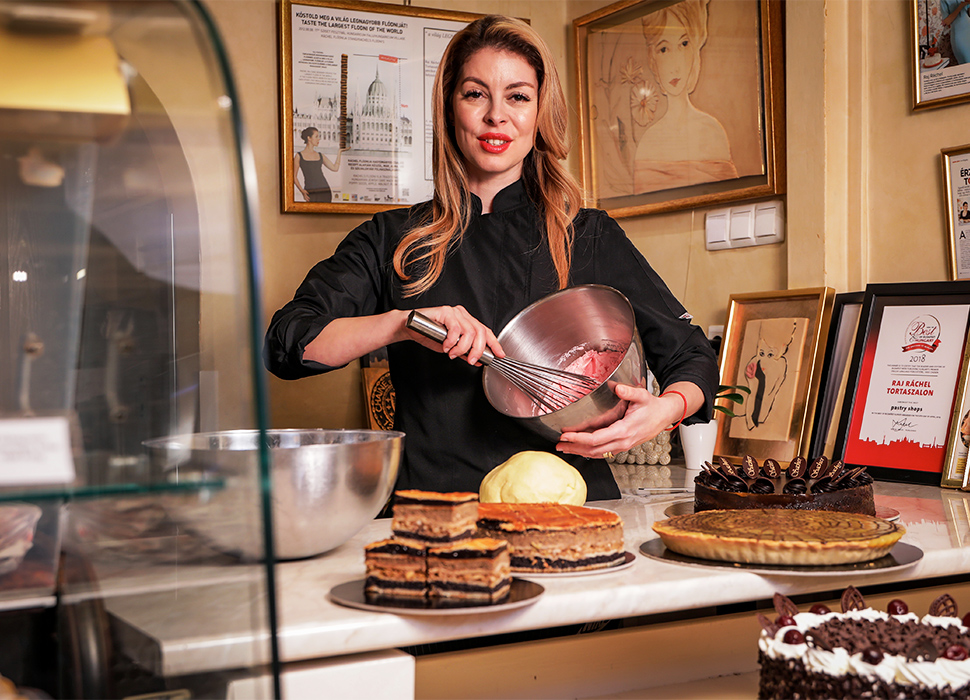 Raj whipping up a storm in her cake salon

Rachel Raj remembers the flódni of her childhood table fondly. Now, as a baker, cake designer and TV personality, she’s made her family’s flódni famous – at first selling it in the coffee shop she inherited from her mum, and later expanding to two more locations in Budapest. She also has an online store where her loyal followers can bag any one of her beautiful cakes, but flódni is by far the most popular.

Today I’m meeting her at her flagship ‘cake salon’ – still standing at the same location as her mum’s shop in the modern Jewish Quarter, not far from where Rachel grew up. Forced off Buda Hill in 1686 by the Imperial Army, the Jews of Budapest eventually settled into this inner-city enclave to weather the storms of the 20th century. These days, lively bars and trendy restaurants outnumber kosher shopfronts – but Jewish businesses are slowly moving back in, thanks to a rejuvenated community coming out of a long period of hardship. 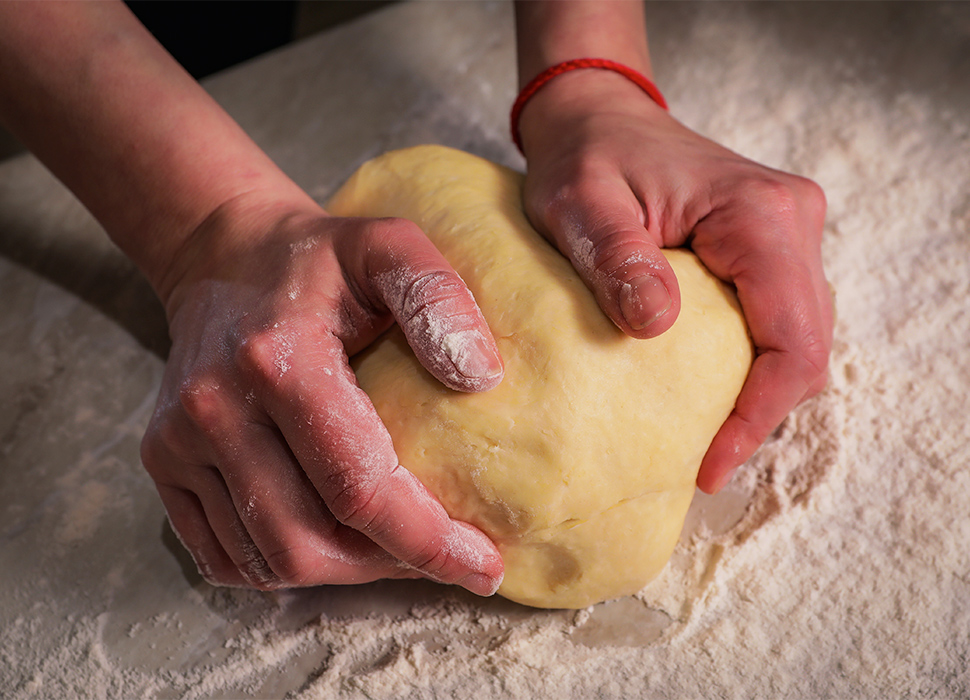 I’m a bit early when I ping through the shop door. Rachel – dressed in a navy chef’s uniform – greets me warmly, but she’s frazzled. “I haven’t finished my look!” she says. I tell her to take her time, I’ll gawp happily at her cakes. My mouth waters at the sight of a Barbie-pink raspberry cream cake and a glistening chocolate ganache, but then I spot it – the flódni, towering above the rest, displaying its earthy layers proudly.

When Rachel comes back, she’s sporting Dietrich-red lips and a cascading blonde blowout. “Much better!” she breathes, fizzing with the casual glamour of a celebrity giving a house tour. She’s agreed to give me a little flódni-making lesson, but her new look is more red carpet than floury kitchen.

Any doubts I have about her handiwork are soon put to rest – she moves over to her workshop and gets stuck in, kneading a giant ball of dough with the pace and precision of a self-possessed pro. The flódni, she explains, is a beast – the work of an entire day, not just a few hours. “My mum and grandma would make it only for special family gatherings,” she says. “Every family has their own version of the recipe. I put a personal spin on all my other cakes, but I would never mess with my grandma’s flódni.” 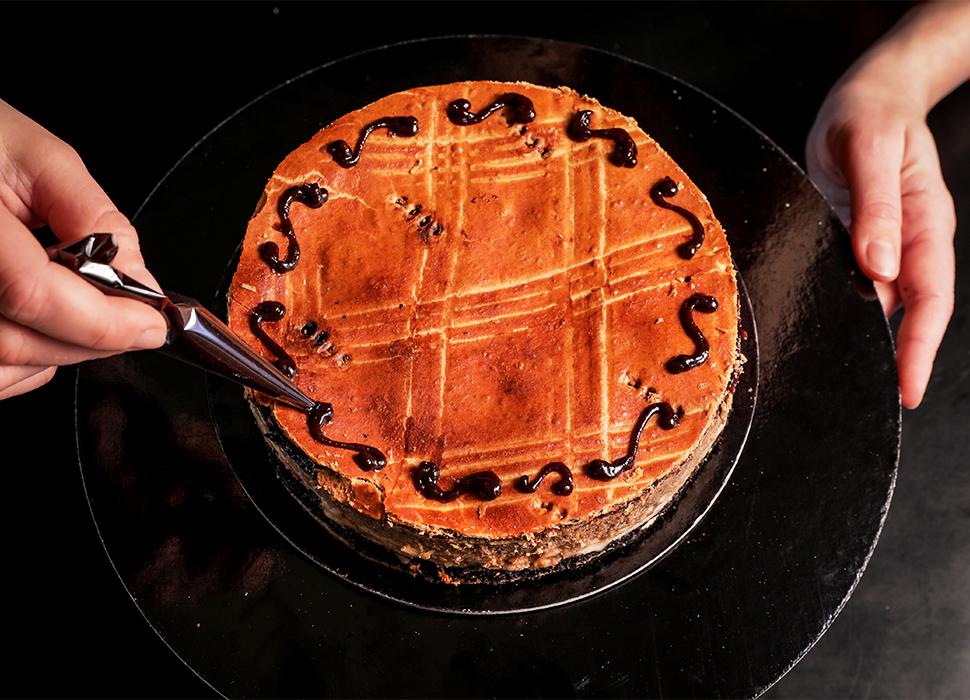 Making the flódni look as good as it tastes

Good thing, then, that people happen to love it. Rachel’s flódni has reached way across the cultural divide, amassing fans from every faith. Her stall at Budapest’s Christmas market is among the most popular; every December, her shops sell out of flódni as the city scrambles to snag it for their Christmas table.

“Flódni is the best ambassador for the Jewish community,” she explains, rolling out the dough. “Food is such an integral part of Judaism; we show our love through cooking.”

There’s a whole lot of love going into this cake, layer after layer. First, the jet-black ground poppy seeds; then the cinnamon-spiced grated apples; then the sweet, chewy ground walnuts; and finally a dark plum jam, the Raj family’s signature. It’s like a giant mash-up of all the cakes my grandmother – a Hungarian Jew herself – used to make. 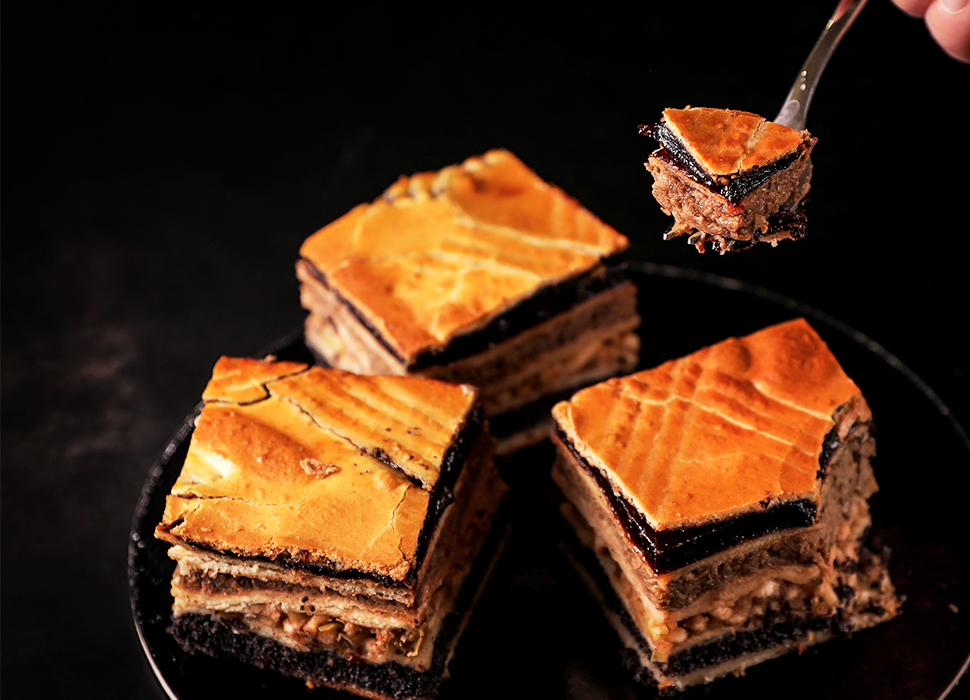 Laughter wafts from the kitchen. “My staff have lots of fun,” says Rachel, brushing the flódni with egg yolk. Her shop is a happy place, brimming with the optimism of Budapest’s healing Jewish community. I think again of my grandmother, who, by the end of her life, had become so traumatised by speaking her native Hungarian tongue that she stopped.

My musings are interrupted by the smell of fresh-out-the-oven flódni. It’s heady, spicy and irresistible. Rachel lays it on a cake stand and spins it around so we can admire its meticulous tiers, and it nearly tips over. I gasp, but Rachel is unshaken. “Don’t worry, the flódni is a farmer, not a princess,” she winks, sliding the unscathed cake back to safety. I cut a piece from the dense outer pastry and try a forkful. It’s amazing – sweet but not sickly, rich but not overwhelming, and complex, like a little flódni world. 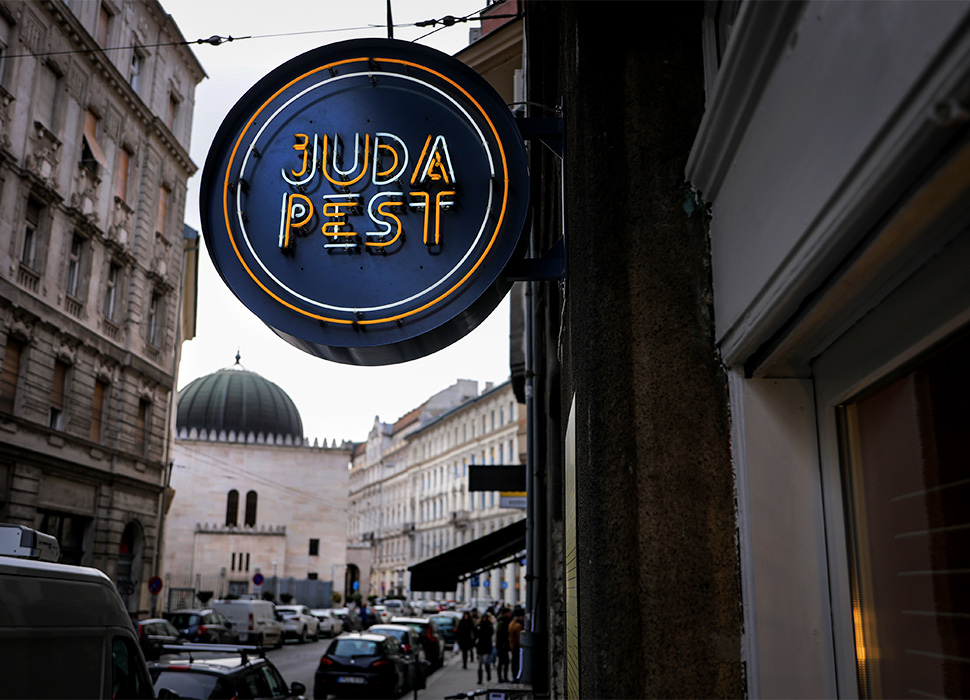 It’s also universal: the apple layer evokes both the sweet ceremonial Passover dish charoset and the warm, festive flavour of Christmas. Flódni is the great unifier. “The question of whether I feel more Hungarian or Jewish doesn’t make sense to me,” says Rachel. “The younger generation are super-interested in Jewish food; they aren’t thinking of those divides.” 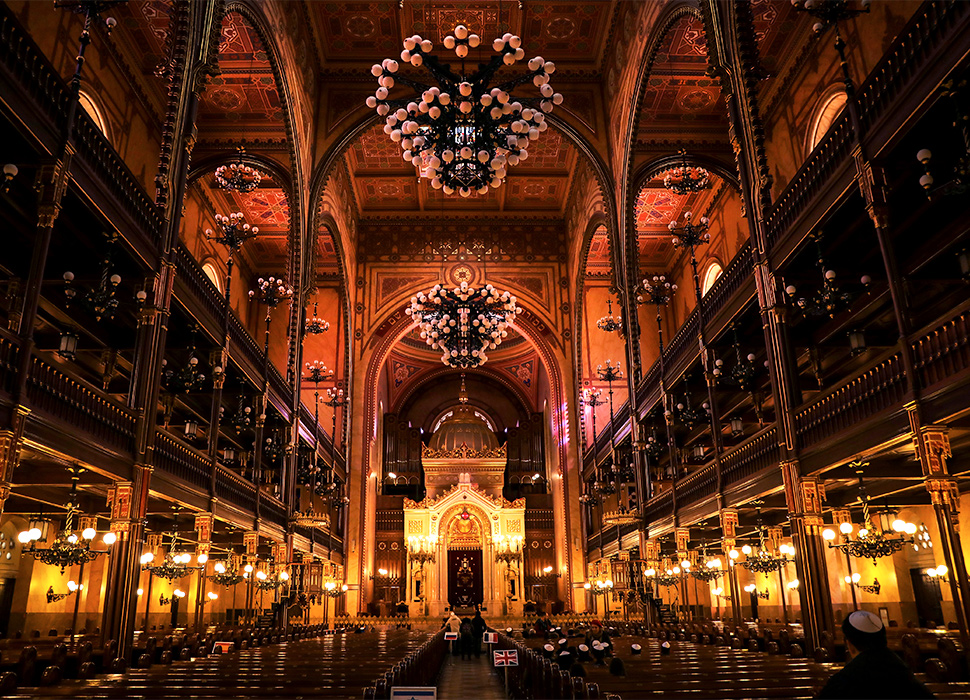 The magnificent interior of the Dohány Street Synagogue, now under renovation

Stepping back out into the Jewish district, I can see what she means – young Budapestians spill out of Israeli restaurants housed in wide, dilapidated buildings, coaxed to life after decades of neglect. Nearby, an eager tour group outside Dohány Street Synagogue snap photos of its stripy Moorish facade – it’s the best they can do for now, as the temple is shuttered for a massive renovation. I wonder what my grandmother would think about this open-armed community, a million times removed from what she knew. “It’s a crazy world,” I hear her say in my ear. She’s right, but at least we have cake.

The best bars and nightlife in Gran Canaria