The dinky islet of Kastri, just off Kefalos in Kos / Image: Adobe Stock

The most beautiful villages in the Greek Islands

The dinky islet of Kastri, just off Kefalos in Kos / Image: Adobe Stock

That's the dreamy villages done, but how can you tell which Greek Island is right for you and your holiday?

And when you've schlepped all the streets, it'll be time for some eats. These are the most delicious islands in Greece. 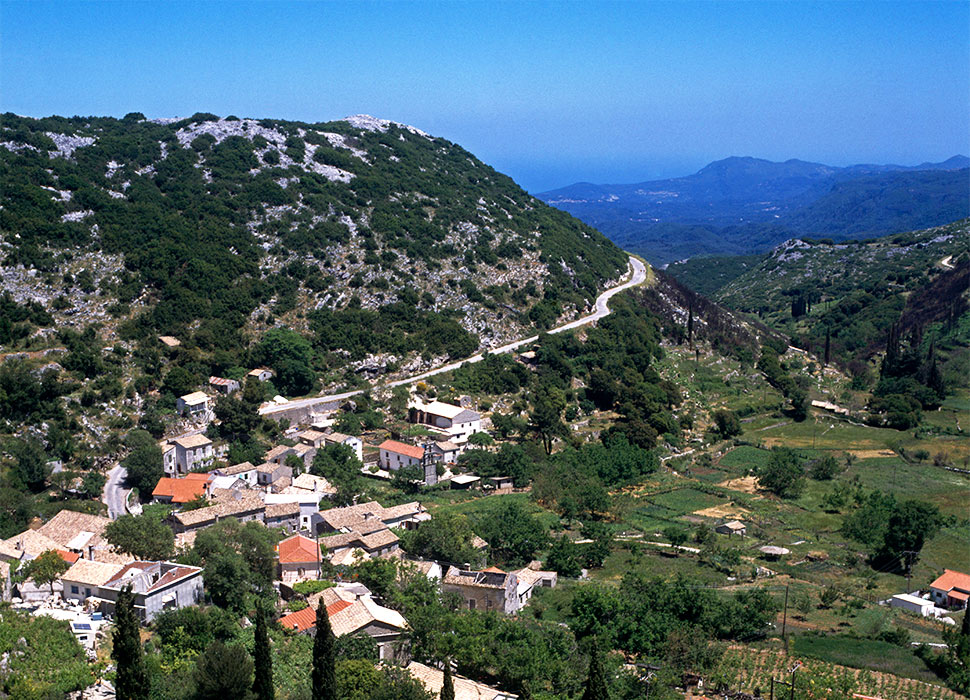 Historically, Corfu folks eschewed living on their golden coastline in favour of villages in the rugged mountainous interior. Why? To avoid piracy. But Strinilas, just below the mighty summit of Mount Pantokrator, is also a desirable spot for its cool breezes, not least in the shade of the splendid 200-year-old elm tree that dominates its main square. The village name derives from the distinctive hard stones – ‘strinaria’ – that make up the bulk of traditional buildings here. If you’re made of stern stuff yourself, sample the fragrant local Moschato wine, and feel elevated. 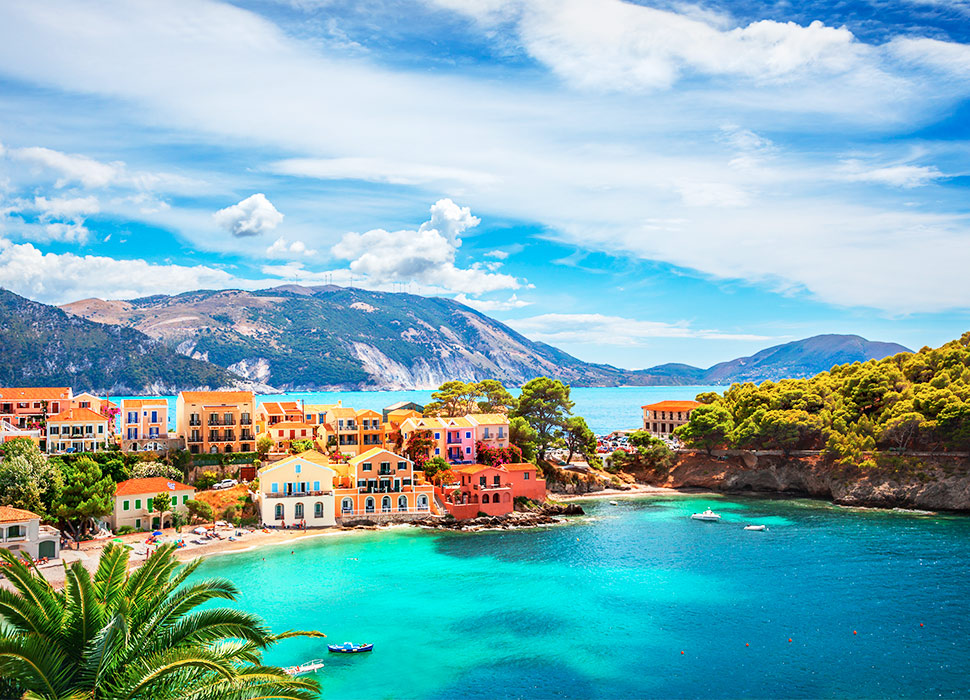 This thoroughly lush village occupies a dinky peninsular abutting a horseshoe-shaped bay on the north west of Kefalonia. Wander among its pristine, Pantone-coloured homes, which cascade down to the picture-perfect pebbled foreshore. Or, if you’re up for a modest hike, yomp through aromatic pine and cypress trees to the ruined 16th century Venetian castle overlooking the bay and world-famous Myrtos beach. The French generously funded the rebuild after a nasty 1953 earthquake, hence the name of Paris Square. Merci, lads. 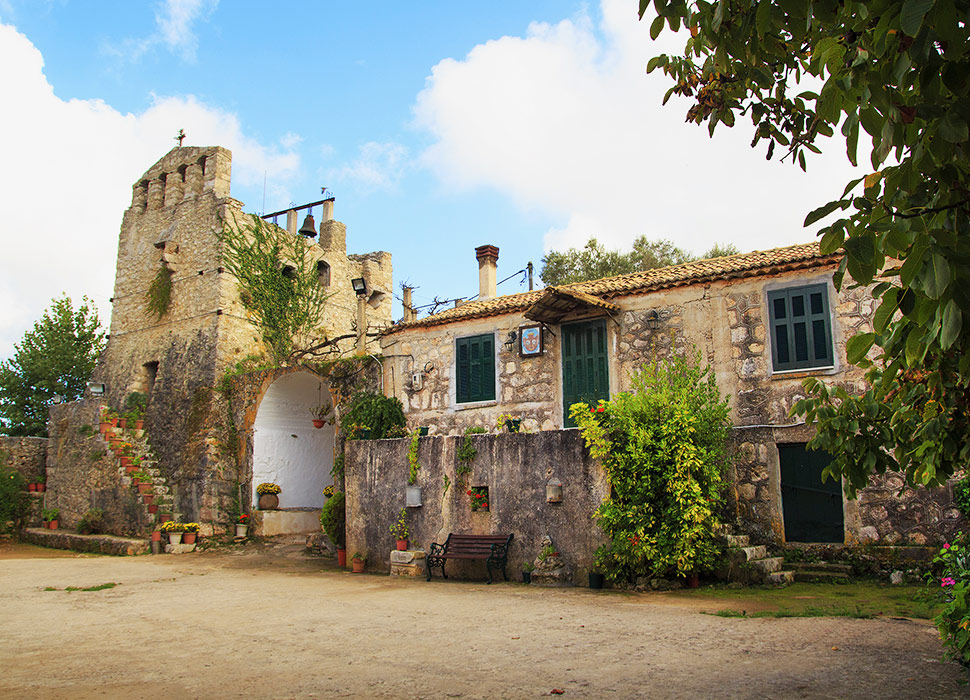 Indulge in a spot of ruin lust at Anafonitria / Image: Adobe Stock

In most respects a typical Zante village and hub for handicrafts – just the place to nab a jar of honey or a nice colourful rug – the village of Anafonitria’s centrepiece is the ruined 1429 monastery that dominates its skyline. It was here that Zante’s patron saint – St Dionysius – performed his defining Christian act, pardoning his own brother’s killer after hearing about it during a one-on-one confession and still not alerting the authorities. Also nearby is that famous beach with the shipwreck, which launched a thousand brochures – but to get near it these days you’ll need the patience of a saint. 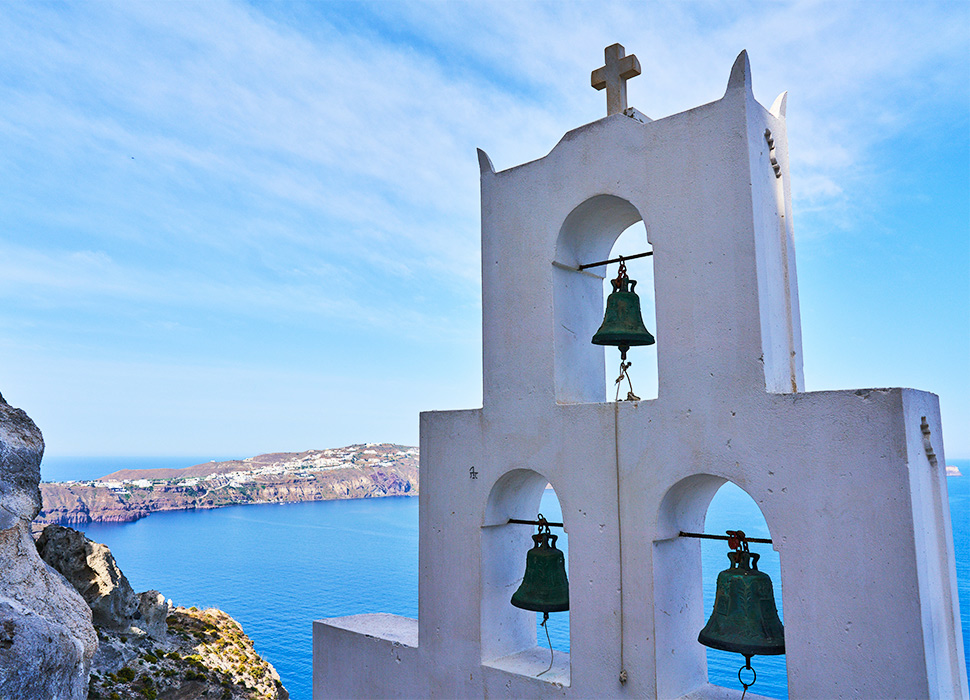 The most tuneful tower in Megalochori / Image: Alamy

Oia and Fira are the classic stops on any classic Santorini itinerary. But Megalochori, a little further southwest along the caldera rim, is just as rewarding. Glossy-white Cycladic homes with the requisite blue trim rub shoulders with more modest ‘cave homes’, made back in the 17th century, when hiding from pirates was a way bigger deal than it is today. Plenty of fun tavernas dole out famous local Vinsanto wine, the perfect refreshment for sashaying under the gorgeous triple-height bell tower of Agioi Anargyroi church. 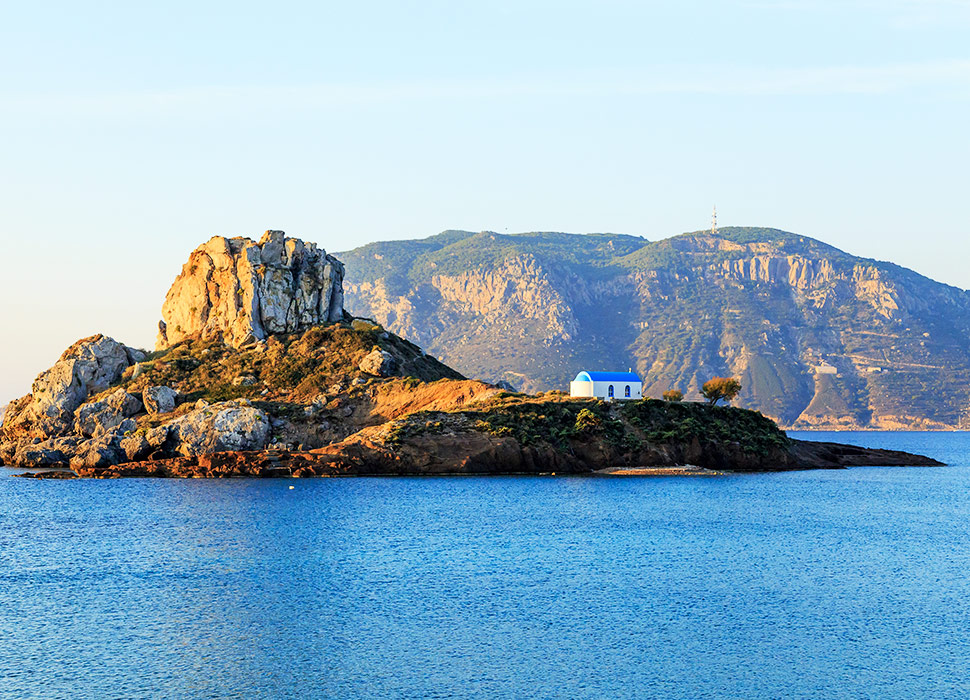 The swimmable island of Kastria, off Kefalos / Image: Adobe Stock

Your quintessential holiday paradise Greek coastal village, Kefalos is restful enough nowadays, with its tangle of quiet backstreets and warm lapping seas. But back in the day it was quite the seat of power, as the biggest town on the island – back then known as Astypalea. It's roughly divided into two, a towny bit up the hill and a marina at the waterfront, with an extra beatific boon in the tiny, church-specked skerry of Kastri – an easy swim from Kefalos itself. 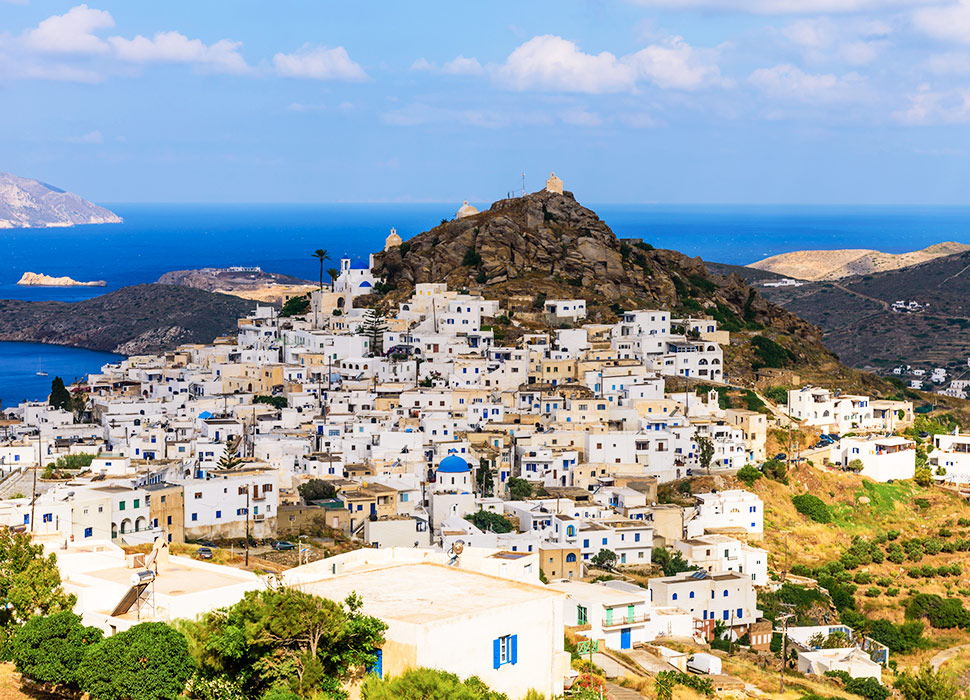 The only town of any appreciable size on tiny Ios is an absolute jewel by any standards. Arranged amphitheatre-style – up a steep hill and along a bay – it’s cheery tumble of sugarcube houses as sublime as anything in a picture book. Its alabaster walls are punctuated here and there with pops of colour – a blue church dome, a flash of pink Bougainvillea, a dainty wrought-iron staircase. Hike up the hill and there’s an actual amphitheatre, as well as a clutch of windmills. The nightlife isn’t bad either. Let’s hope they never do an Ios update.

Regular ferries from Santorini and Mykonos 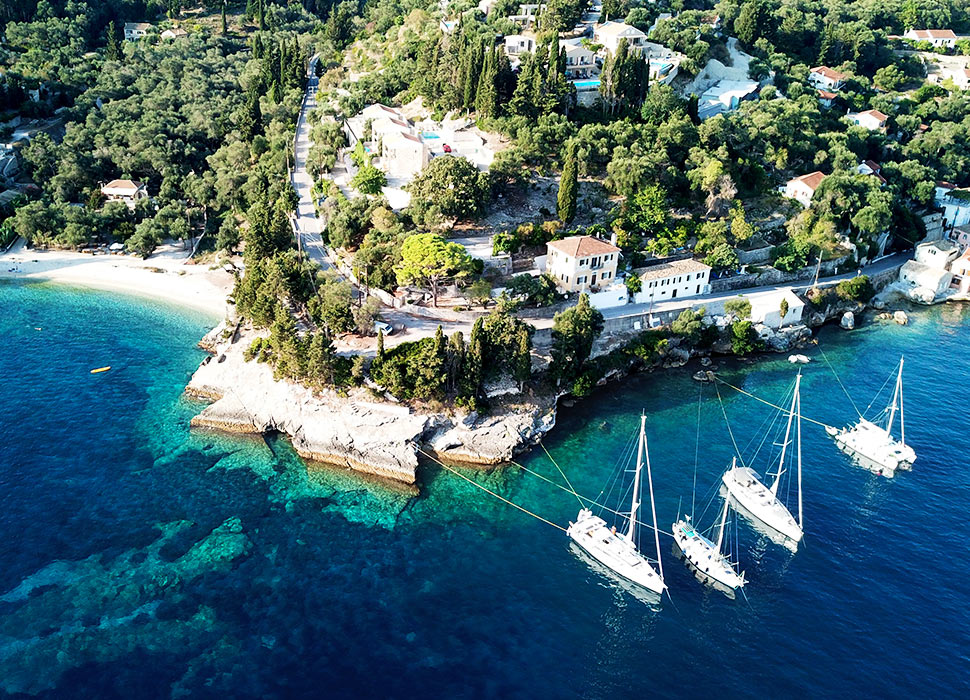 This titchy little sprat of a fishing village on the sleepy island of Paxos is daintily strung along both sides of a sapphire-blue natural bay. If you like eating fish and looking at boats, this is the place to be – several tavernas have seating that goes right up to the water's edge, and all day long the restful traffic of cutesy boats in and out of the bay sets the rhythm of life. Dinky little buildings – an arresting mixture of Greek and Italianate styles – make for the perfect rustic backdrop, and nearby Marmaris beach has lots of shade under its overhanging olive trees. 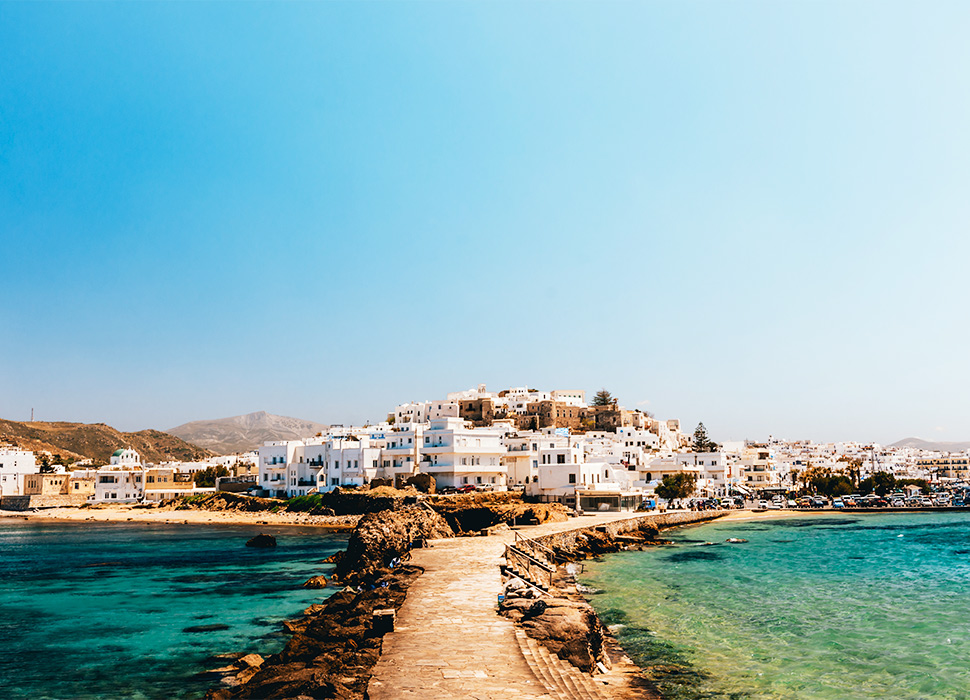 A view of Naxos Town from the Temple of Apollo / Image: Adobe Stock

The very first thing you see as you approach Naxos Town by boat is this magnificent stone doorway, part of a now-ruined temple to – they reckon – the god Apollo. Word on the street is if you stand under the colossal door frame, the gods will grant your innermost wishes. On the hill above the town stands a 13th-century Venetian castle, now an archaeological museum that also plays host to highbrow classical music gigs. With ample upscale dining spots, its own pebble beach and a clutch of fancy boutiques, Naxos Town is perfect for Greek Island newbies seeking a holiday spot that knows exactly to make a grand entrance.

Regular ferries from Santorini and Mykonos