Oia – the most beautiful village in Santorini? / Image: Adobe Stock

The best things to do in Santorini

Strung out on a lofty volcanic caldera hundreds of metres above the crashing Mediterranean, Santorini is truly a cut above. Here’s our pick of the island’s highlights

Oia – the most beautiful village in Santorini? / Image: Adobe Stock

Greece has got more than its fair share of paradise rocks to visit. We'll help you decide which Greek island is right for you.

When you're done with that, you'll be hella peckish – and these are the most delicious islands in Greece.

1. Colour yourself surprised at Kokkini 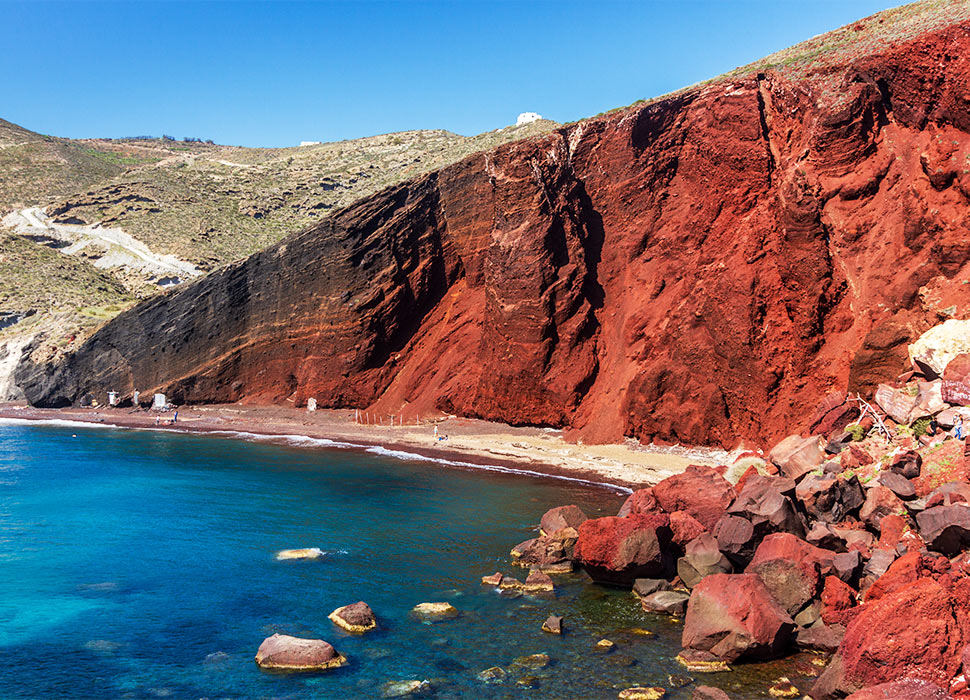 Mars attacks at the cliffs of Kokkini / Image: Adobe Stock

Black sand beaches are cool, sure. But they’re nowhere near as nifty as the downright extraterrestrial red Kokkini beach out on Santorini's less-accessible southern coast. There's a moderate hike from the car park, but your reward is an otherworldly crescent of rust-coloured rock fringed with moody volcanic sand, all magnificently contrasting with the pristine blue sea. Bag a sun lounger – there’s usually one free – and fantasise you’re Elon Musk vacationing on some future Martian colony. Follow signs from Akrotiri village.

2. Take a hike at Skaros Rock 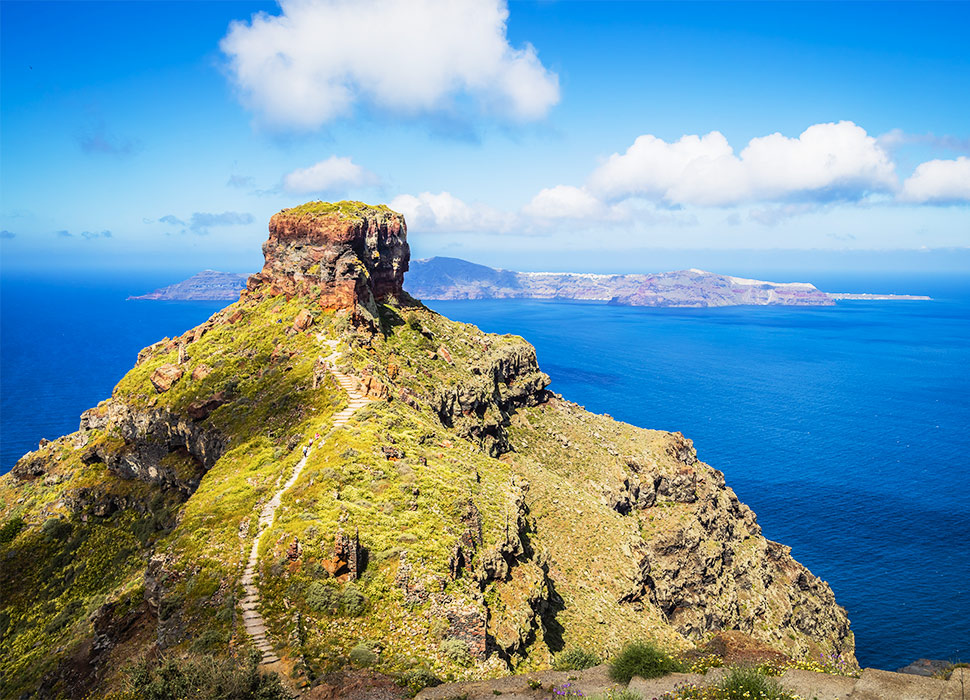 The famous Skaros Rock peninsular – technically a cape, geography boffs – stands out like a radiant sore thumb. Despite looking so natural and wild, once upon a time it was ward to a mighty castle and countless supporting outbuildings. Today it’s a rugged and thoroughly unique hiking spot – pass the Church of Agios Georgios in Imerovigli and take the steep path out onto to the rock. Legend has it the castle was never conquered in 600 years of wannabe bandits trying their luck, and it took an earthquake to bring it down. Not all capes have heroes. 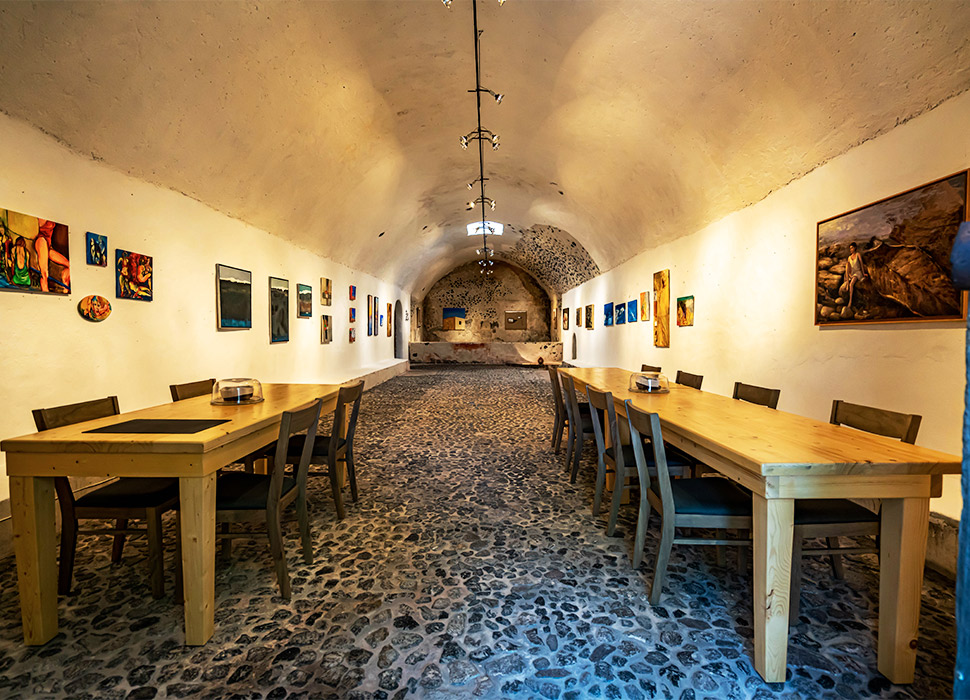 In a thoroughly inspired move, a winery in operation since 1861 repurposed some of its cool pumice-stone cellars into an art gallery. Nowadays, Art Space not only does a lovely line in predominately white wines crafted from the local Assyrtiko grape, but it also displays an impeccably-curated selection of quality painting and sculpture from local and international artists. Peruse the work – Tony the owner is often on hand to talk you through it – over a glass or two of the good stuff. It'd be rude not to.

4. Hit the road to ruin in ancient Akrotiri 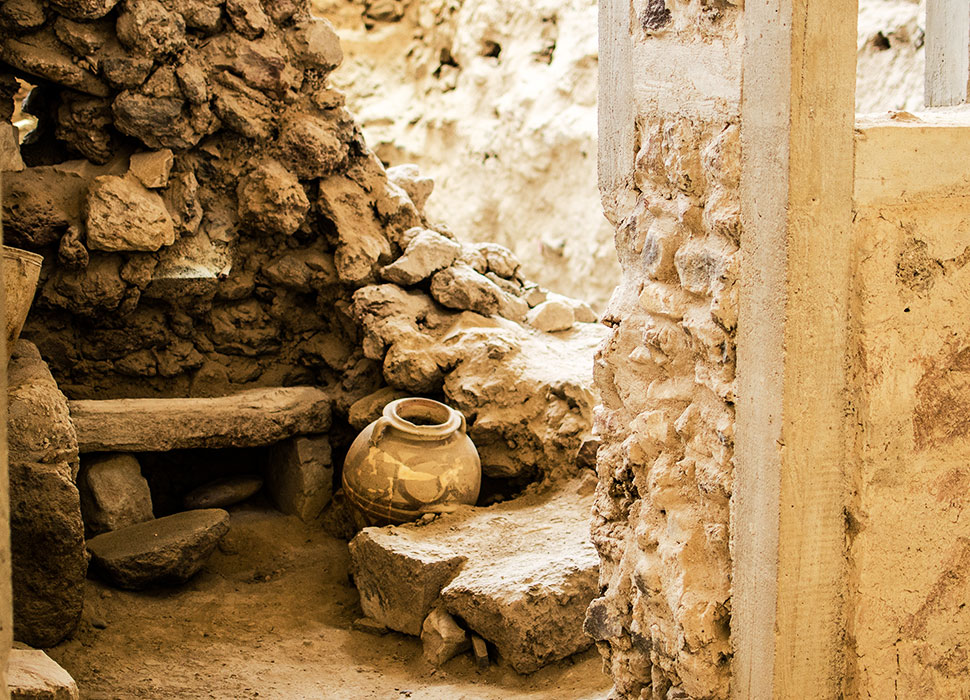 Akrotiri might just be a funner Pompeii / Image: Adobe Stock

Way back in the day – the 17th century BC, to be exact – present day Santorini was a bustling trading hub for the Minoan civilisation. A gigantic volcano put paid to that, coating the Minoan world in a thick film of ash. Which sucked for them, but it’s great for us because their gorgeous civilisation was so well preserved. Stroll around the ruins for yourself – it’s a bit like Pompeii, but more than a millennia older, bristling with fun details like ancient stone toilets. The Archaeological Museum of Thera holds many of its salvaged mosaics and more delicate treasures.

5. Catch up at the Tomato Industrial Museum 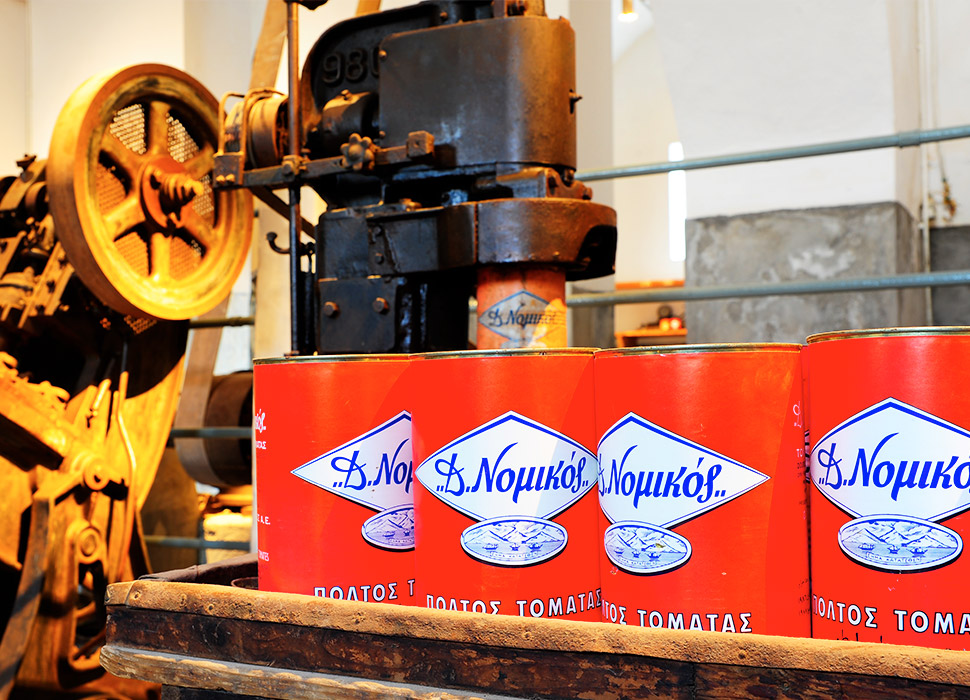 Yes you can at the Tomato Industrial Museum

As well as wine, Santorini’s volcanic soil is also great at yielding deliciously sweet cherry tomatoes. Learn about the lively 20th century trade in this versatile fruit with assistance from well-red museum staff, and relive epic episodes from the factory’s history – like the time all their machinery washed into the sea – through audiovisual guides and detailed multilingual commentary. Canned, of course. There’s a gift shop with bizarre themed ornaments and even upscale jewellery – it’s purée indulgence.

6. Have a holy moment at Prophet Elias Monastery 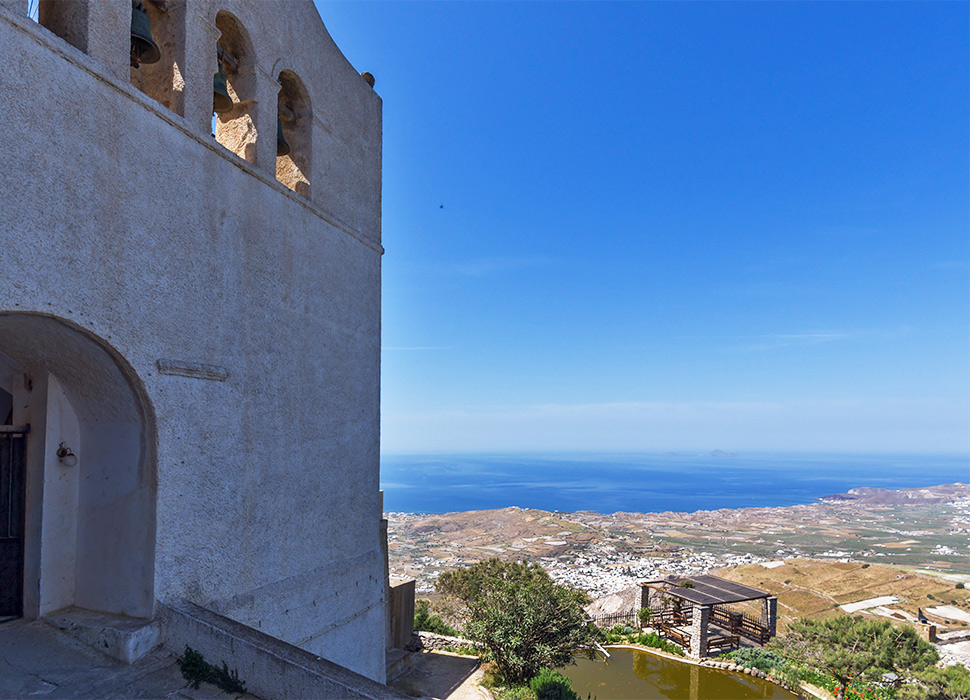 This lofty monastery is as close to God as Santorini gets / Image: 123rf

Santorini’s highest peak – a dizzying and usually very windy 586m above sea level – is capped off in divine style by the Prophet Elias Monastery. Forget what you thought you knew about monasteries though – monks here in the 18th century were a force to be reckoned with across the region, dominating trade and culture, and even sending their own ship on overseas missions. The building today hosts an important collection of rare ecclesiastical items, priceless relics, hand-written books, and Byzantine icons. But the views alone will be enough to have you in raptures.

7. Drink in an Oia sunset 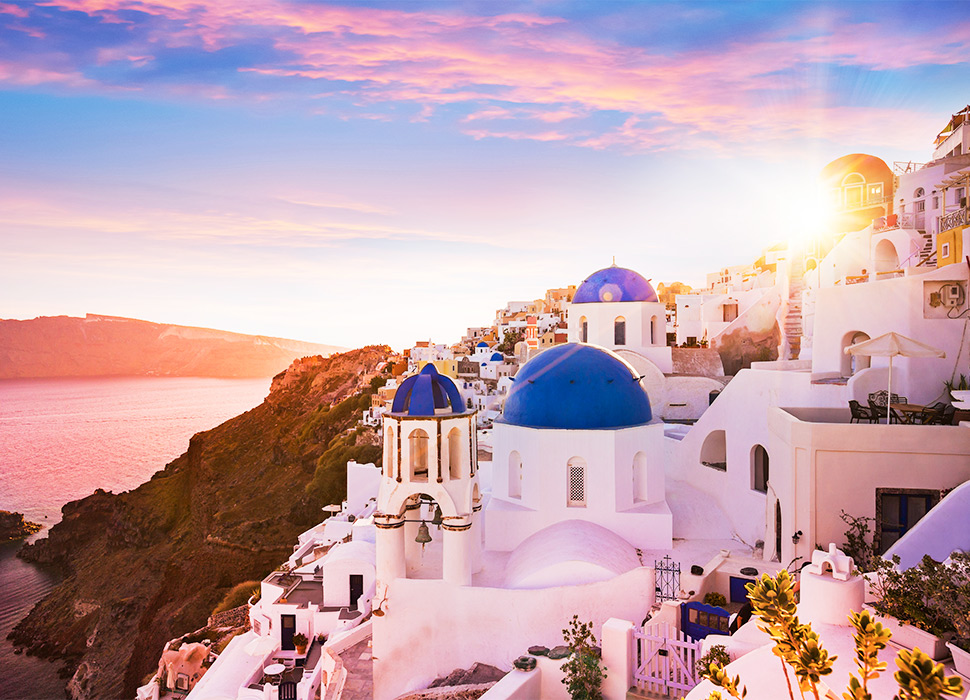 The village of Oia is famous around the world for its mind-blowing sunsets. Every day, the blazing orb dips down over the postcard-perfect Aegean, painting the heavens with every colour you can imagine. The only civilised way to enjoy this life-affirming marvel – this live-action Turner painting – is with a stiff drink in hand. For best results, take an early table at the enticingly named Sun Spirit cocktail spot, to the left of the bar facing outwards if they let you. Or, if you’re peckish, Pelekanos has a handy 360-degree roof terrace restaurant. Your dinner plans are suddenly looking up.

8. Rise above it all on a cable car 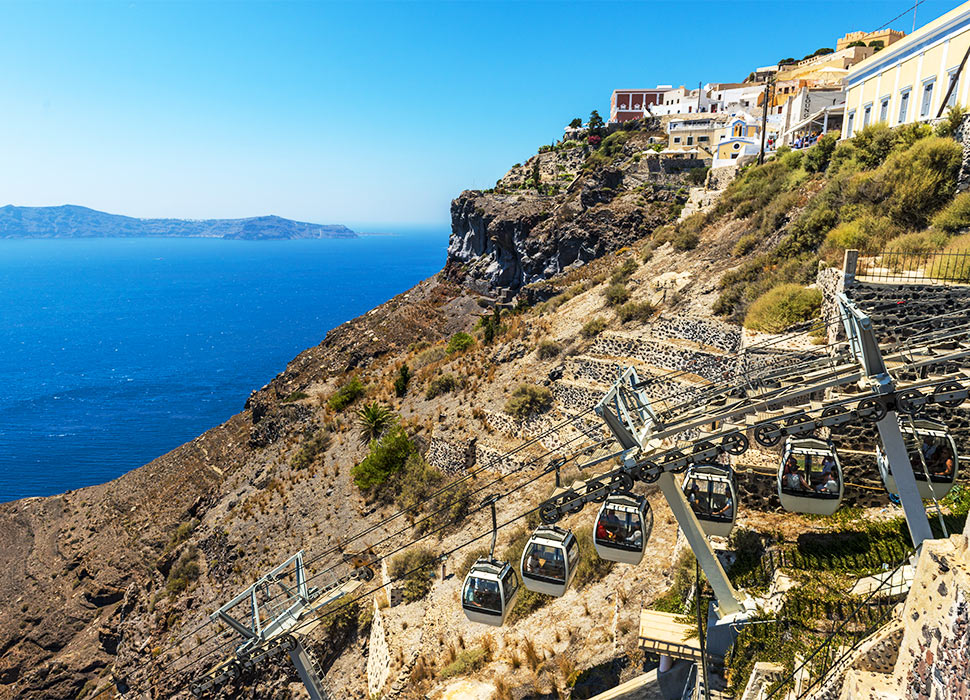 Give your ass a rest with one of Fira's handy cable cars / Image: Adobe Stock

For most if its history, if you wanted to get from the Santorini waterfront up to the capital of Fira you’d need to yomp up the steps – 588 of them, to be precise, covering some 220 metres in altitude. Worse, if you had baggage, you’d load it onto a long-suffering donkey. Wealthy shipping magnate and Santorini native Evangelos Nomikos was something of an ass man, so to save those lovable dobbins he paid for an Alpine-style cable car in the early 1980s. The ride today is far more civilised, and offers a uniquely hair-raising view of the caldera. And some of the profits even go to the poor old out-of-work donkeys.

9. Meet the village people of Megalochori 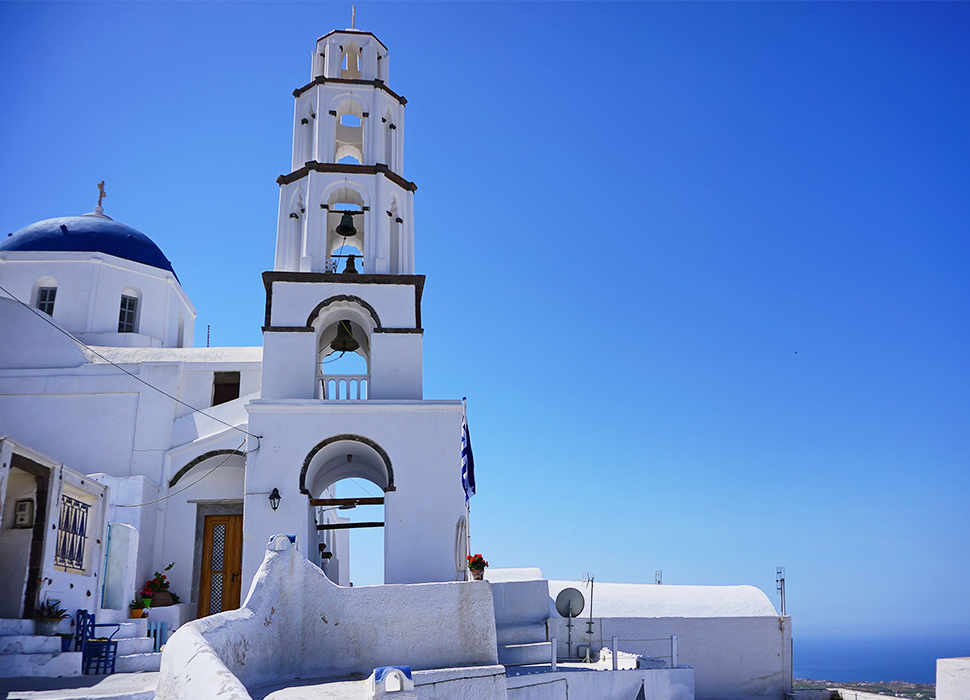 Megalochori's beaut of a bell tower is a chiming icon / Image: Adobe Stock

Way less overcrowded than Oia or Fira but just as beguilingly lovely – get an eyeful of that triple-height belltower looming over its dainty tangle of alabaster back alleys – Megalochori, towards the south of the island, also has its share of secrets. Several so-called ‘cave homes’ are preserved for you to have a poke around in, a legacy of the time residents would flee to the hills to avoid rapacious pirates. Fair play to the pirates – the local vinsanto wine is still well worth plundering.

10. Catch a flick at Kamari Cinema 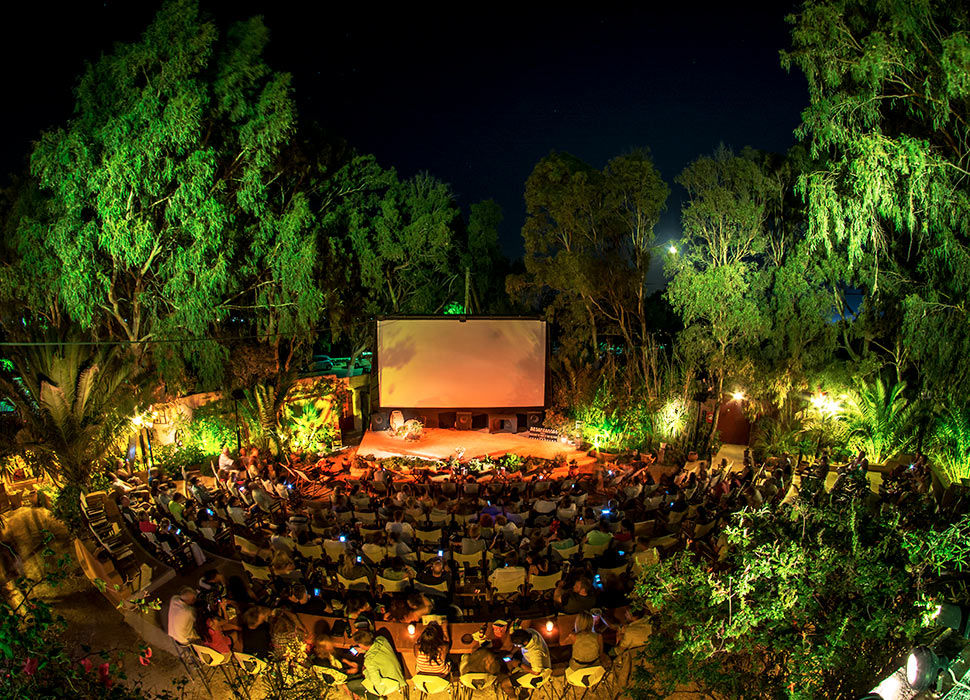 Hit this alfresco screen for the Cyclades best cinema experience

Santorini’s balmy climate is so romantic that an open-air cinema is a perfectly legit business proposition. The Kamari has been going strong since 1987, and to this day screens a crowd-pleasing and varied programme of big screen blockbusters and niche festival favourites. There’s a very respectable cocktail bar on site, and high-end nachos to chomp on as you enjoy the magic of the silver screen under the serene Cyclades starlight. Bring a blanket – you might not be cold, but you’ll definitely feel like snuggling.