Greece’s wild north is criminally overlooked – literally, as you gaze down at the rugged landscape from 37,000 feet, on your way to a sunny southerly island. But between the majestic mounts, foreboding forests, and deserted coastline, there's plenty to delight the intrepid traveller

Tell someone you’re going to Greece, and their interest will be piqued by this country of 6,000 idyllic islands. Tell someone you’re going to edgy Epirus, on the northern fringes of the Greek mainland, and heads will likely be scratched. Yet Greece’s most mountainous region offers all the benefits of a Hellenic holiday, all year long. And with barely another soul to spoil the view. Here’s why Epirus needs to be your next Greek odyssey…

Standard issue sun-dapple outpost fine with you? Here's our guide to your ideal Greek island.

Or dial it down even further – these are the most delicious islands in Greece.

For the ups (and downs) 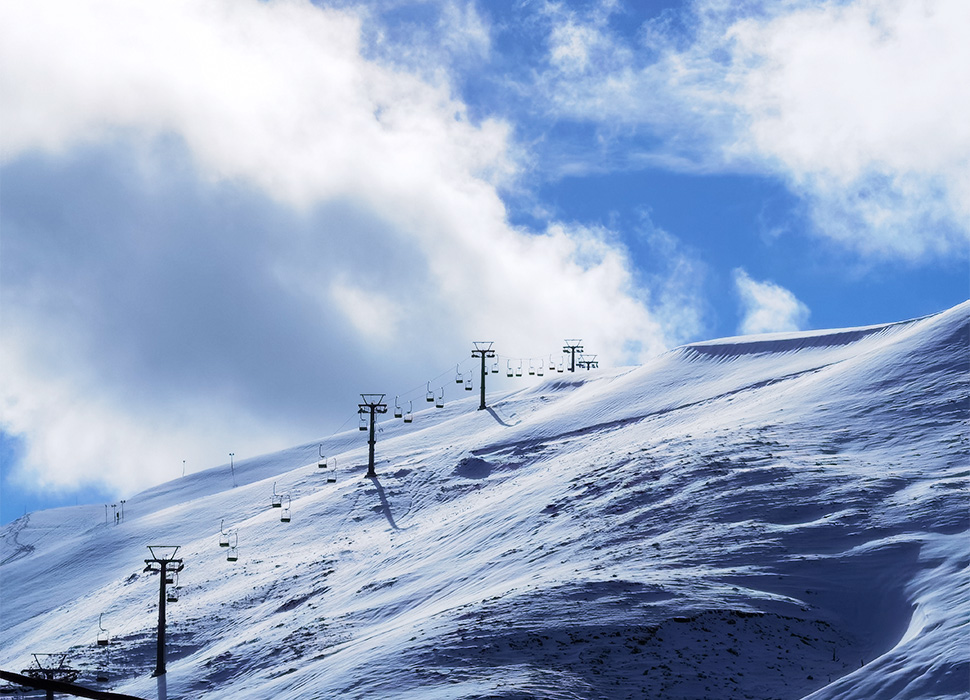 Snow-covered mountains cut off rural Epirus from Greece’s main cities, so head for the picturesque peaks of the Pindus, and get your ski boots on. Anilio is Greece’s newest ski resort, and thanks to a dinky 5km of gently sloping runs, is ideal for novice snowsporters. Prefer going uphill to down? At 2,637 metres above sea level, Smolikas is the second-highest mountain in all Greece (after Olympus, where the gods live, obviously), and there are plenty of pine-dotted day hikes for keen explorers. Oh, and did we mention the world’s deepest gorge relative to its width – according to Guinness, at least –  is in these very mountains? Visit Vikos-Äoos National Park to see what a 1,100 metre deep gorge looks like when it’s squeezed into a two-metre gap.

To make four-legged and feathered friends 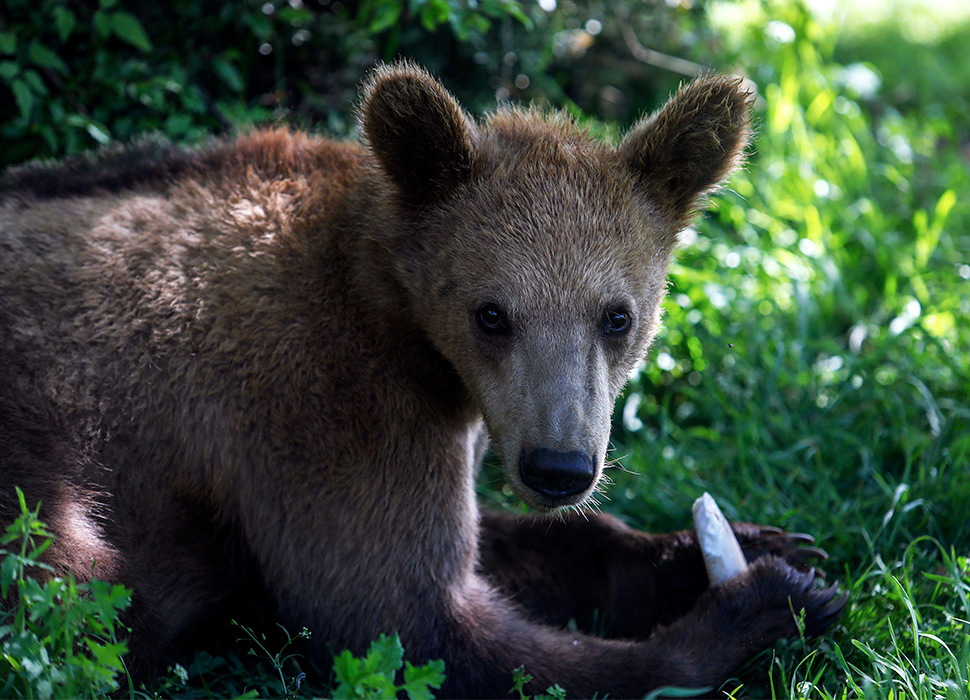 If you go down to the woods today, you’re sure of a (very big) surprise: Epirus is home to one of Europe’s last remaining populations of wild brown bears, with hundreds of prime specimens wandering the region’s forests and plucking fish from icy streams. Check out the good work of Arcturos sanctuary, a vast enclosed area where rescued and orphaned bears live out their days in peace. They also run a 70-acre wolf sanctuary, if seeing the cool canines in action is more your thing. Prefer things with wings? There’s a good chance you’ll see a Dalmatian pelican stalking the marshy Amvrakikos Wetlands, which you can spy from one of many free birdwatching towers. We’re twitching with excitement.

You can geek out on Ancient Greek history 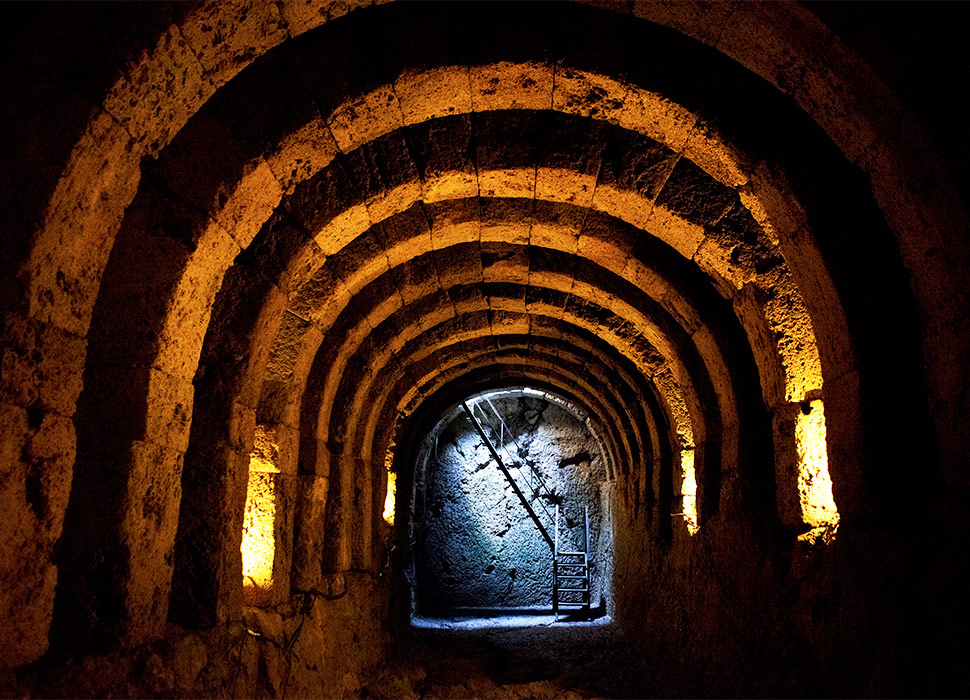 Fans of creepy underground call centres to Hades should descend into the deep echo chamber at the 3rd-4th century BC Nekromanteion of Acheron, where it was believed the living could speak to the dead by way of a medium-esque oracle. An hour’s drive through the mountains, and also a product of the 3rd century BC, is the impressive ancient theatre of Dodoni, which once entertained up to 18,000 Epirotes with drama, chariot races, and even an ancient version of Eurovision.

For mountaintop monasteries and monolithic mosques 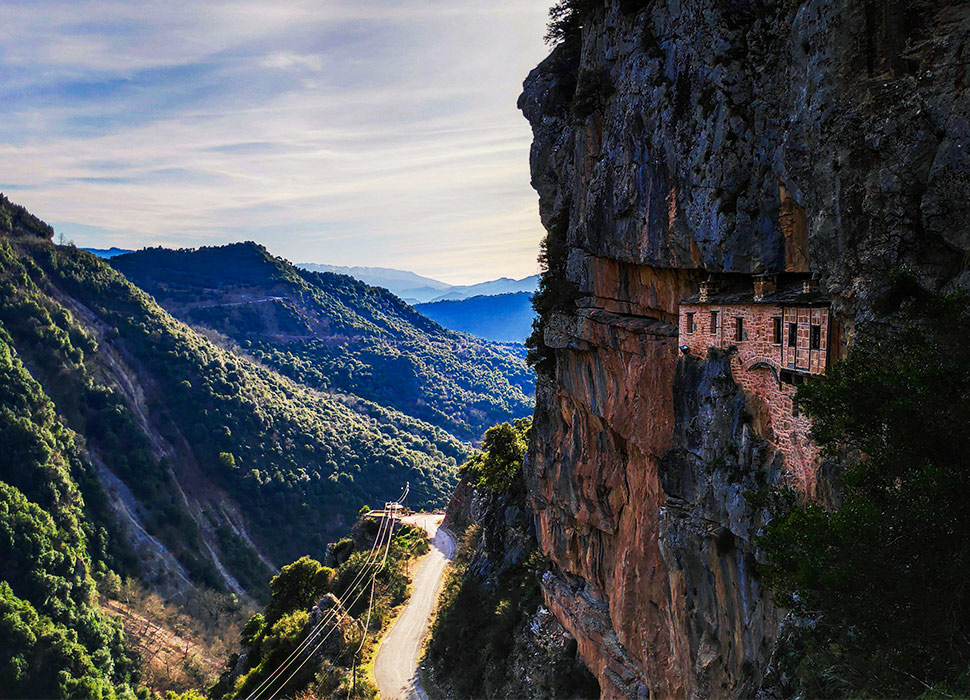 Epirus’ long history spans Christian and Islamic eras, too, so you can expect its religious buildings to be as diverse as the region itself. Byzantine churches with brilliant brickwork pepper the hillsides, as do monasteries: the rock-chiselled, 13th-century Kipinas monastery is particularly postcard friendly (but you’ll have to collect the key from the local kafeneio, then cross a rickety bridge, to go inside. So what? Those monks had to do it for 500 years). Elsewhere, the greying, stone-faced ghosts of decaying Ottoman mosques make for interesting off-road detours.

Ioannina is one of the vibe-iest places in Greece 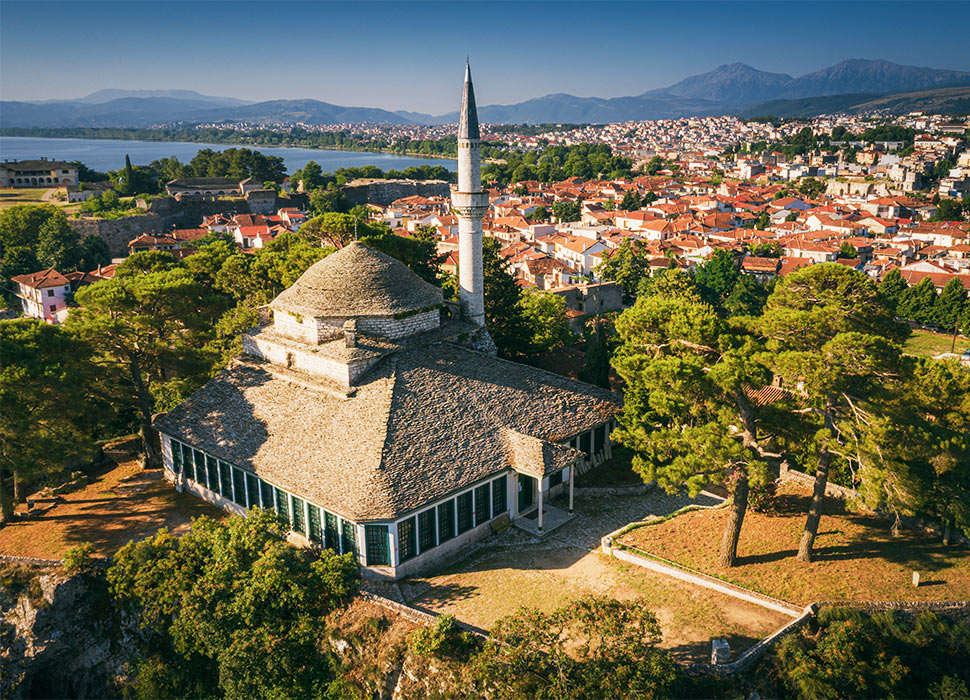 In the unlikely event you need a change of scenery, stop into Epirote capital Ioannina for creative culture, finger-licking food, and swanky shops galore. Inside the walls of Greece’s oldest Byzantine castle is an old town stuffed to the battlements with primary colour-painted houses, homely boutique hotels, and ancient structures. Just outside the walls is a street art-filled labyrinth: the city’s university means that young and trendy Greeks can be found procrastinating on the shores of Pamvotida lake, or eating traditional rooster hilopites (Greek pasta) and listening to bouzoukia at snug-and-stonebaked Fysa Roufa. Now that’s what we call music.

It has some truly precious metal 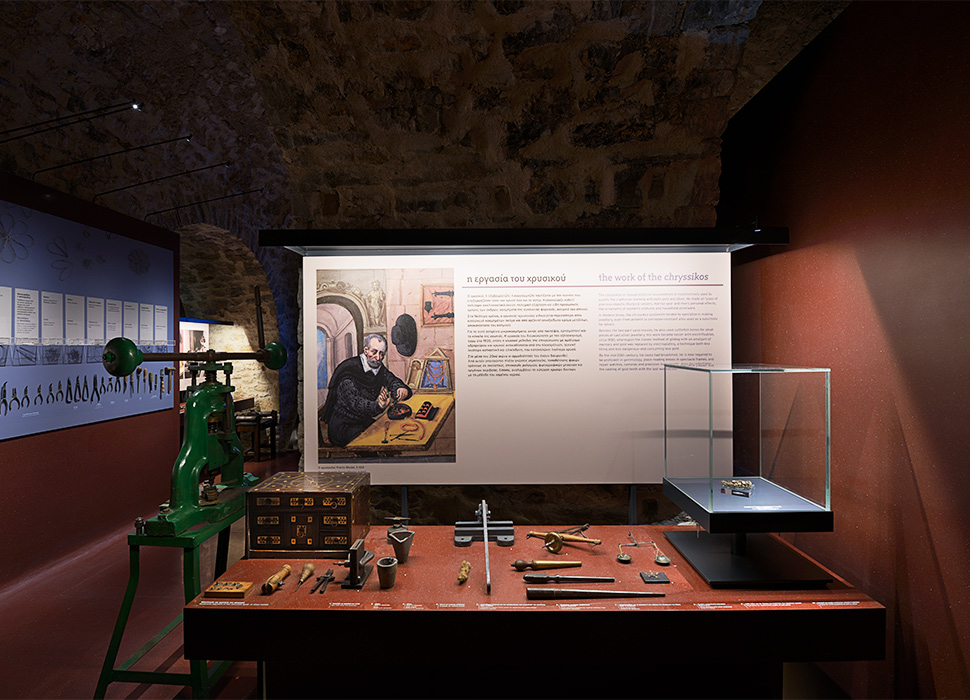 As well as students, Ioannina is renowned for another profession beginning with ‘S’ — silversmiths. Step inside the Silversmithing Museum and you’ll be greeted with the sound of metal hammering on metal. It’s a sound that has echoed through the city’s wooden-slatted Balkan streets for centuries: what began as intricate religious craftwork for bejewelled Byzantine churches soon expanded to catering for the great and the good (of all religions). Sotirios Voulgaros is one of Epirus’ success stories: the skilled silversmith went on to found the glitzy Bvlgari brand. You’ll come out of the museum with a more polished knowledge, that’s for sure.

It’s one of the cheesiest places in Greece (literally) 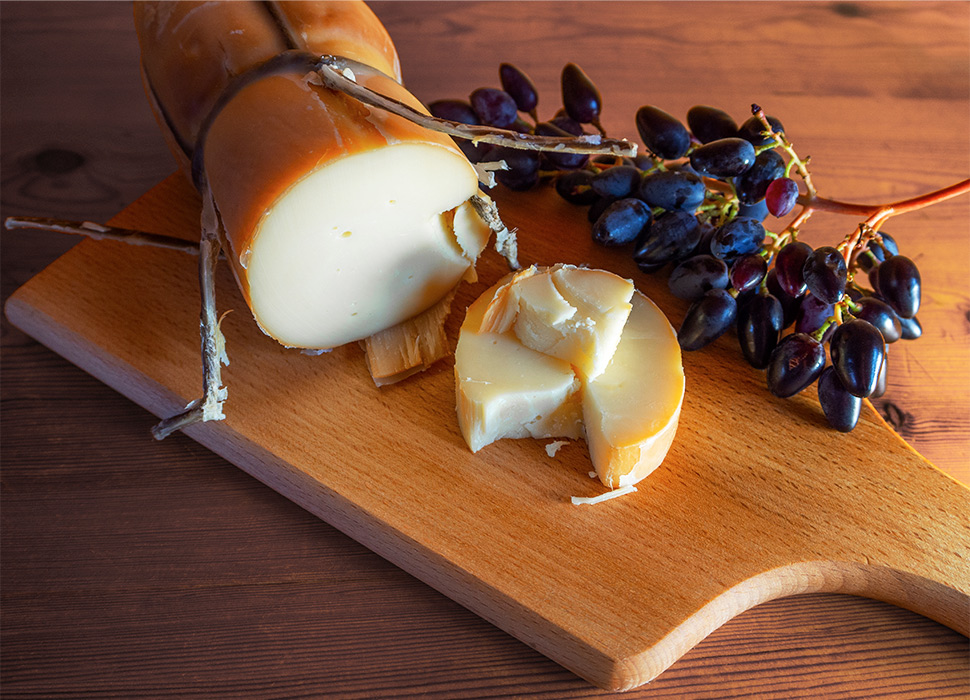 Provolone, meet your Greek cousin, Metsovone. This smoky cheese, from the Vlach (Romance-speaking) village of Metsovo, is Epirus’ defining dairy product, and is the perfect addition to any Christmas cheeseboard. Or Greek-style toastie. Its surprisingly delicate, floral flavour comes from being slowly smoked for 12 days over dried herbs and wildflowers, which carpet Epirus’ valleys in the springtime. Once aged and dried for a minimum of eight months, it starts to look like an anaemic sausage, but when the Metsovone is sliced and grilled with a smidge of paprika, you won’t look at halloumi ever again.

It has secluded sands and silky seas galore 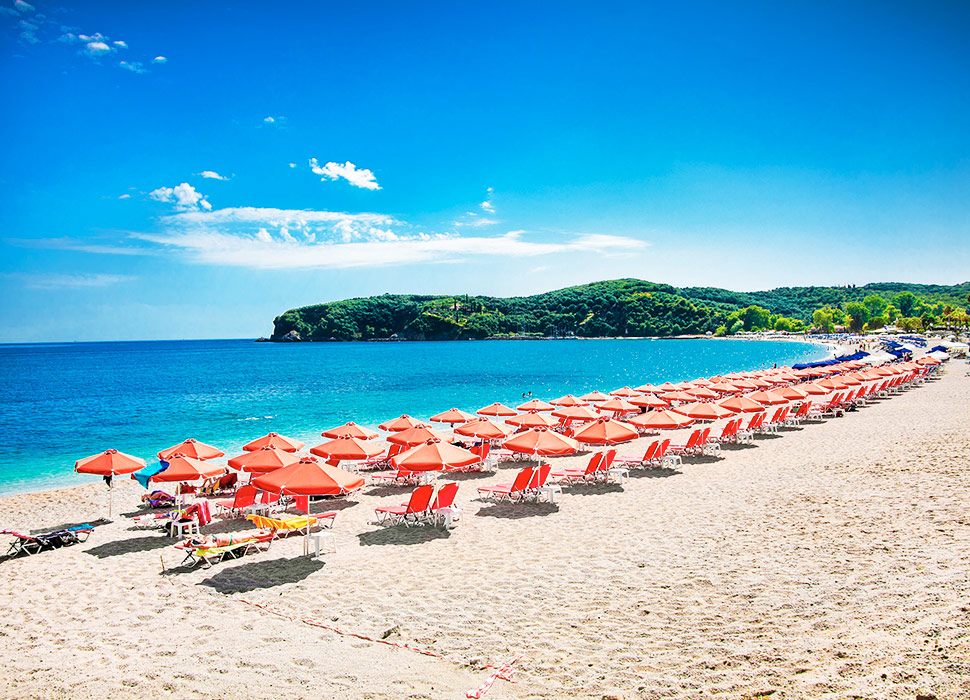 We don’t want you to feel deprived of the sunbathing you had planned for Greece, so we thought we’d highlight Epirus’ sleepy coastline. Parga is a popular paralia (beach) town for Greek holidaymakers, nestled into a hillside where cypress trees meet emerald coves, á la Corfu. History boffs will enjoy rambling around the Venetian castle and tightly-woven streets, but those bound to spend their day with a sizzling read on the sunbed will adore the Blue Flag-listed Valtos beach. When the sun finally goes down, check out Amicos, a family-run ouzo distillery that’s been producing bottles of the aniseed alcohol since 1894. Don’t worry if you’re not a fan of the strong stuff: expert bartenders will happily mix it into a classic or kooky, dry ice-filled cocktail. 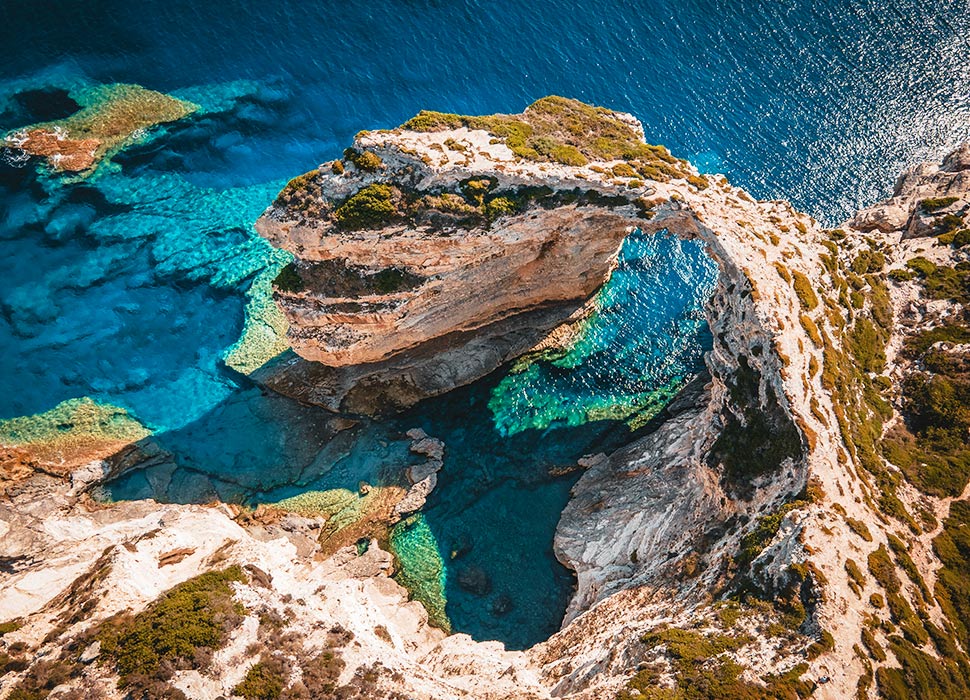 Standing on Parga’s shores, you’ll be casting your eyes to pretty Paxos, which you can access in a hot second with a 45-minute boat excursion. Set your sights even further afield? Whizz 40 minutes up the coast to the port of Igoumenitsa, where fast ferries can take you to a number of convenient Corfiot jumping-off points. Cross-continent adventurers can even hop aboard sea routes to Bari and Brindisi, if you’re feeling the need to cross the Adriatic. Though we’re not sure why you’d want to. By the way, the airport, Preveza-Lefkas, boasts regular bus services to lovely Lefkada, where the milky seas look like something out of a Monet painting. It makes a great first impression.

A break that won’t break the bank 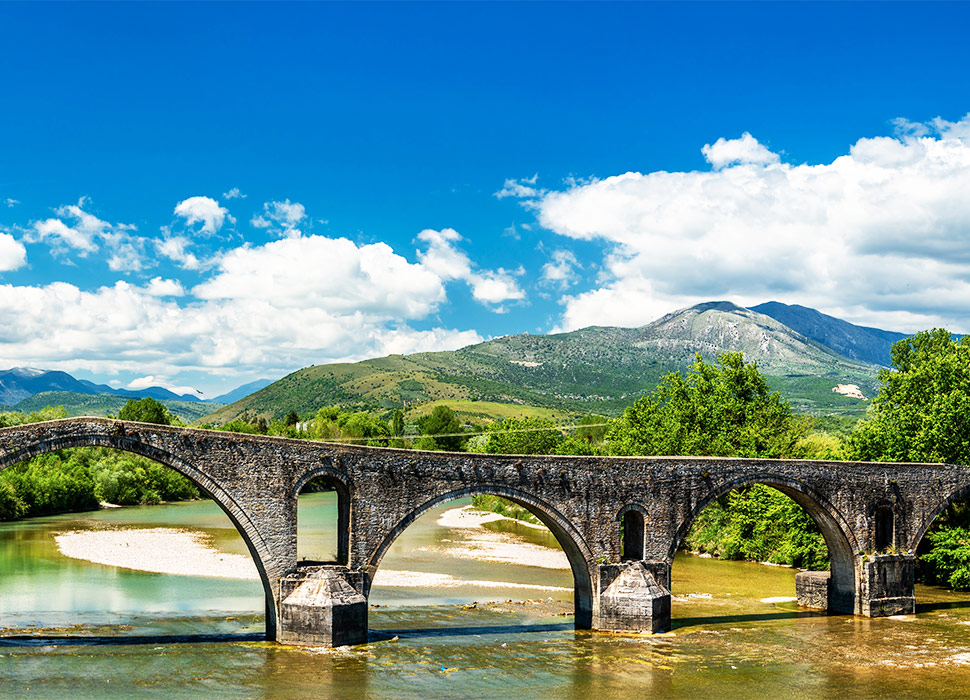 You'll pay nothing to cross the Bridge of Arta / Image: Adobe Stock

Only recently has Epirus become friendly for foreign travellers, thanks to the 2014-opened Egnatia Odos motorway. So, it’s unlikely you’ll be wading through throngs of tourists, particularly if you visit the area's wilderness or scenic, lesser-known towns like Arta. Although it’s well worth writing home about, keeping Epirus secret is in your best interests because it remains incredibly affordable. Throw yourself on the pillowy bed of a boutique hotel for far less than you’d pay elsewhere in Greece, and dine out on a dime with €2 gyros everywhere. You’ll come back with a suitcase full of spare change, as well as 15 kilos worth of Metsovone and epic holiday photos.