The best things to do in Mykonos

From wonderful windmills to awesome archaeology, fruity beaches and fab modern art, these are the best things to while away the days on this lovely Greek island

1. Tilt at windmills in Mykonos Town 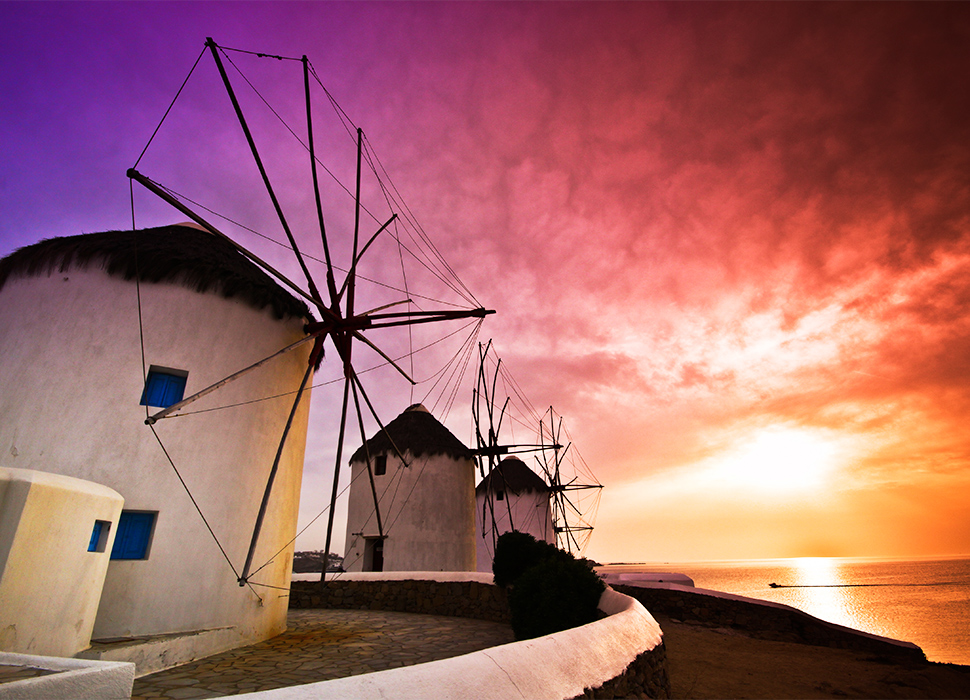 Credit for the idea of putting windmills on this windy Greek island belongs to the Venetians, who built the earliest examples on Mykonos in the 16th century. Sixteen remain, most notably a photogenic cluster of five in the Alefkandra Quarter, and a lone example – Boni – just up from the harbour which is now a museum celebrating the island's agriculture. They haven’t worked for decades, but they’re still pretty and a symbol of how people made a living here before tourism and the hippie invasion of the 1960s. Flour power, if you will. 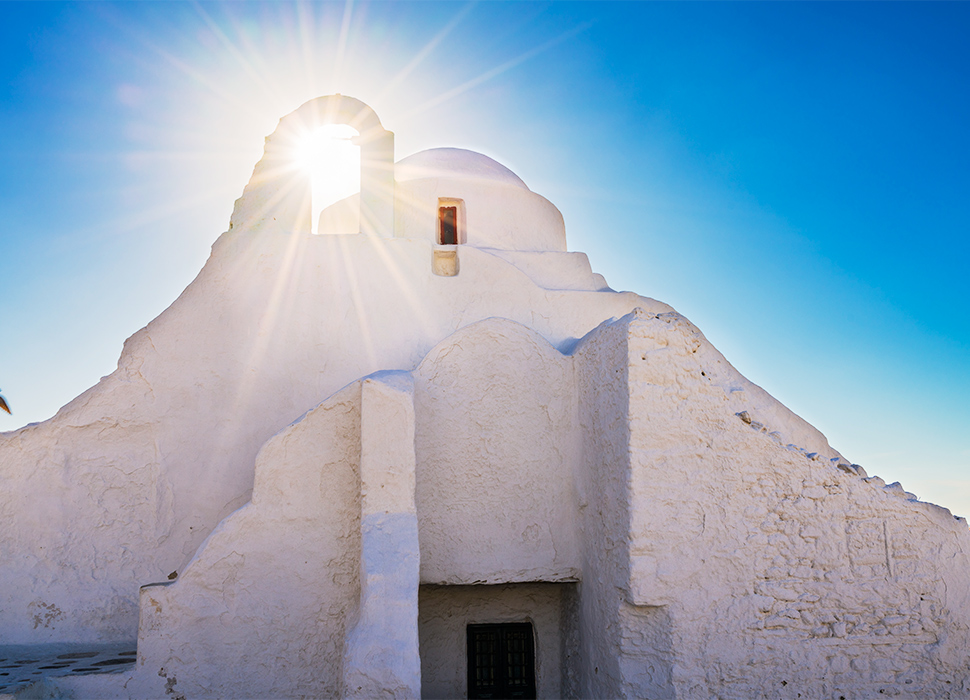 If there’s one thing Mykonos isn’t short of, it’s churches – pious locals enjoy access to many hundreds, at least one per family according to most estimates. But the undisputed winner is Paraportiani – technically not one but five churches all smooshed together into one dazzling whitewashed structure. Constructed gradually over many centuries, the warren-like complex includes the central church of Agios Efstathios, surrounded by Agios Anargyros, Agios Sozon, and Agia Anastasi and capped off by the domed Virgin Mary. 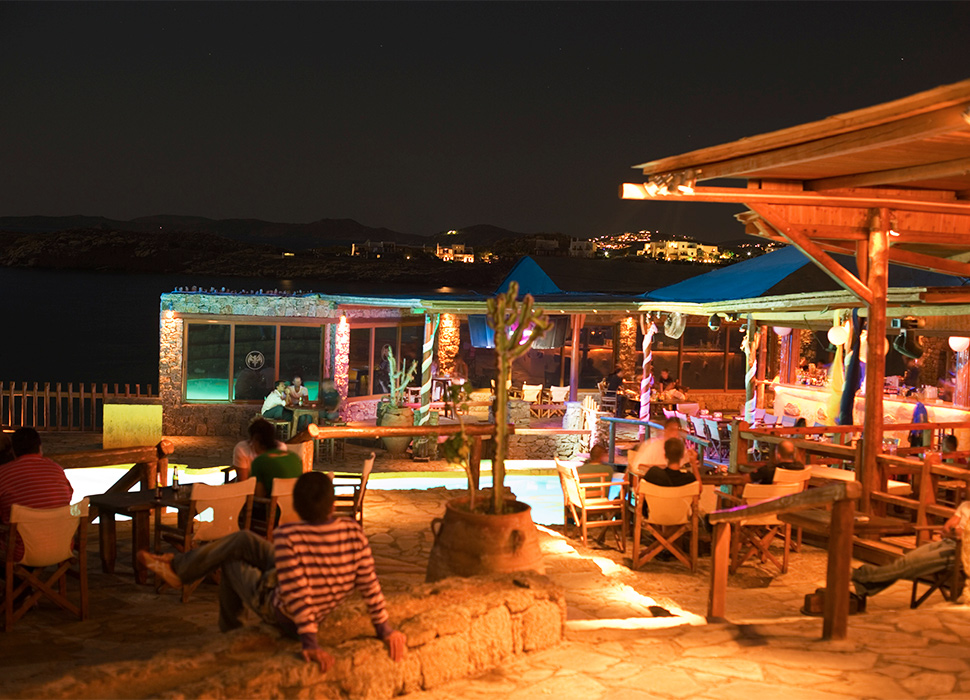 It’s a bit of a trek out of town, but if you want to go dancing until the wee hours then the seaside hilltop setting of Cavo Paradiso is where it’s at. The venue earned its stripes way back in the early 1990s when the likes of Frankie Knuckles made waves on the decks. Today, household-name global talents like Steve Aoki keep things popping off on the dance floors and around the venue's famous swimming pool, dug out in the shape of Mykonos island itself. It'll be a night you won’t forget in a hurry. Most of it, anyway.

4. Mingle with the mythological on Delos 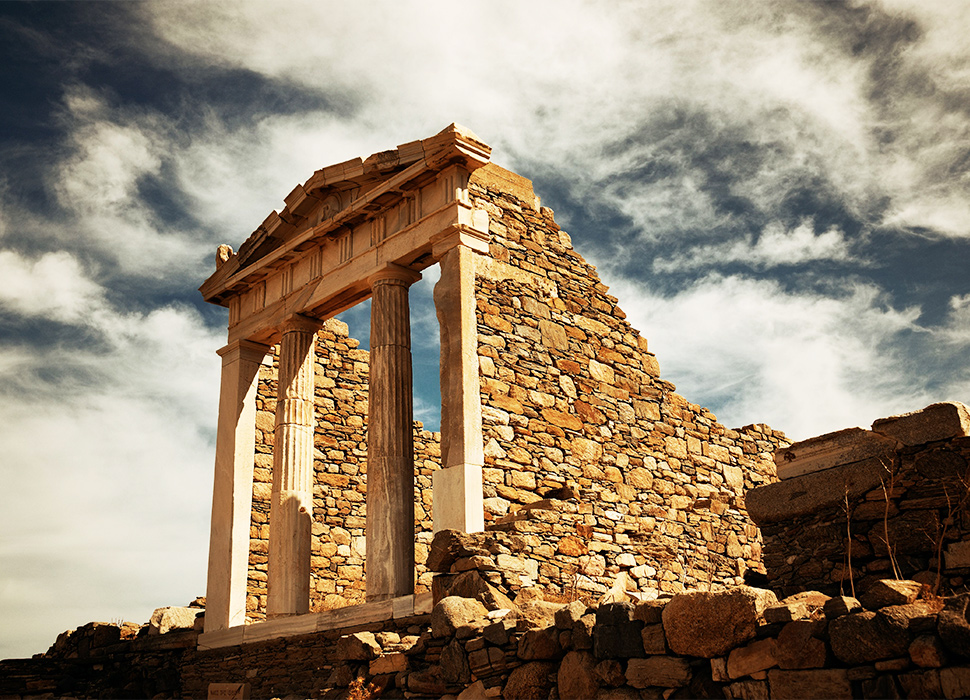 Get your ancient archaeological fix just a few kilometres from the main island / Image: Getty Images

You can’t overstate the historic importance of Delos, an island situated a few kilometres to the south west of Mykonos. A Unesco World Heritage site, it’s home to one of the greatest concentrations of Classical-era statues and relics anywhere on Earth. Wander around abandoned temples, theatres and villas, and grab a snap with the snarling beasts at the Terrace of Lions. Or, if you’re not into the showboating big stuff, there's 3,500-year-old pottery in the museum, as well as emotional personal items like jewellery unearthed at the sacred supposed birthplace of twin gods of Apollo and Artemis. It’s all very civilised.

5. Peace out at Agios Sostis beach 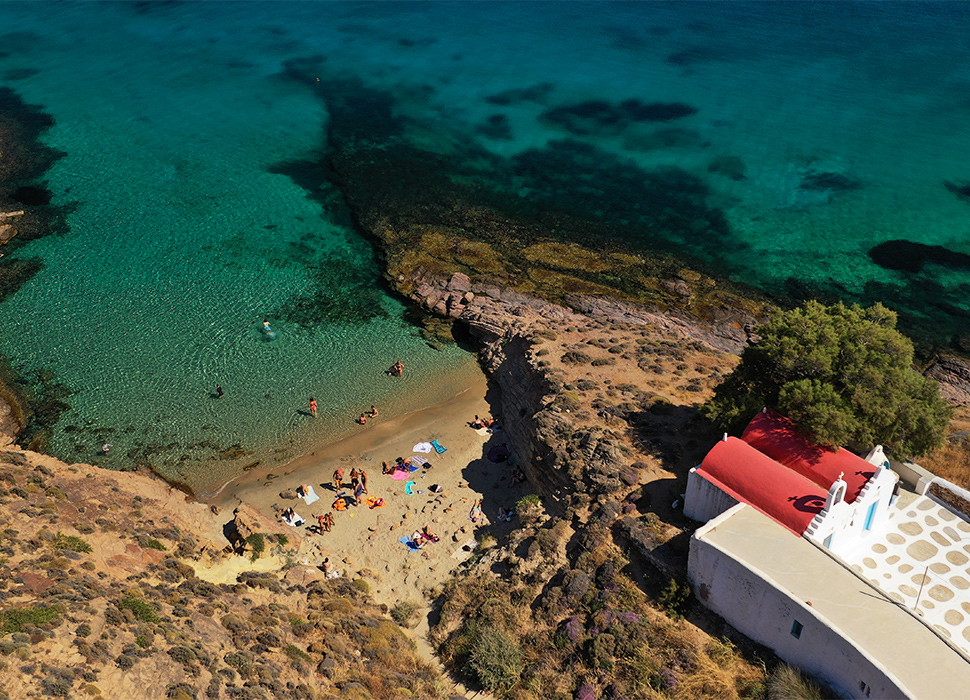 If you’re feeling a bit delicate and craving a change of pace from the busy southern beaches, Agios Sostis might well be just what you need. An undeveloped 250m stretch of sand straddling the more peaceful northern coast of the island, it remains happily devoid of sunloungers and soundsystems. Just you and a backdrop of gentle scrubby slopes, primitive agricultural walls, and of course the twinkling Mediterranean to bob about in before the return to Mykonos proper. 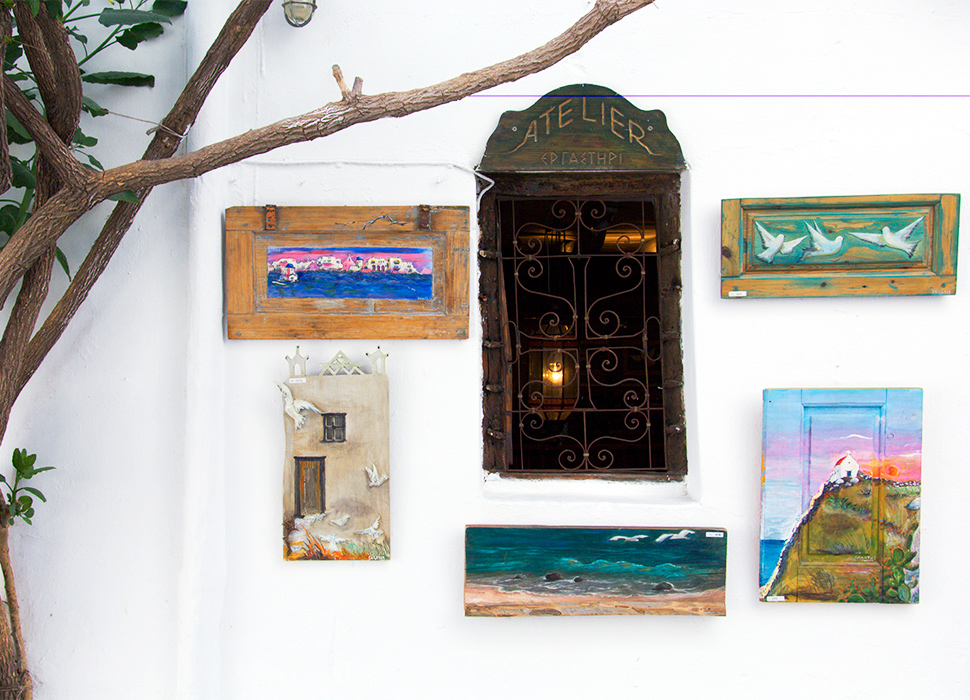 As well as being party central, Mykonos also boasts a very respectable contemporary art scene. Upscale Rarity Gallery (20-22 N Kalogera St) is a linchpin, hosting top-drawer exhibitions of established and up-and-coming talent in every medium, from sculpture to short film installations. The Municipal Gallery (on the corner of Leonidou and Millerou), in the former home of local painter Maria Iglessi, is more of a democratic affair, with regular community engagement and talks. Mykonos Art Gallery (Megali Ammos), by contrast, is more commercial, proffering saucy marble sculptures for the well-heeled souvenir collector.

7. Let it all hang out at Elia Beach 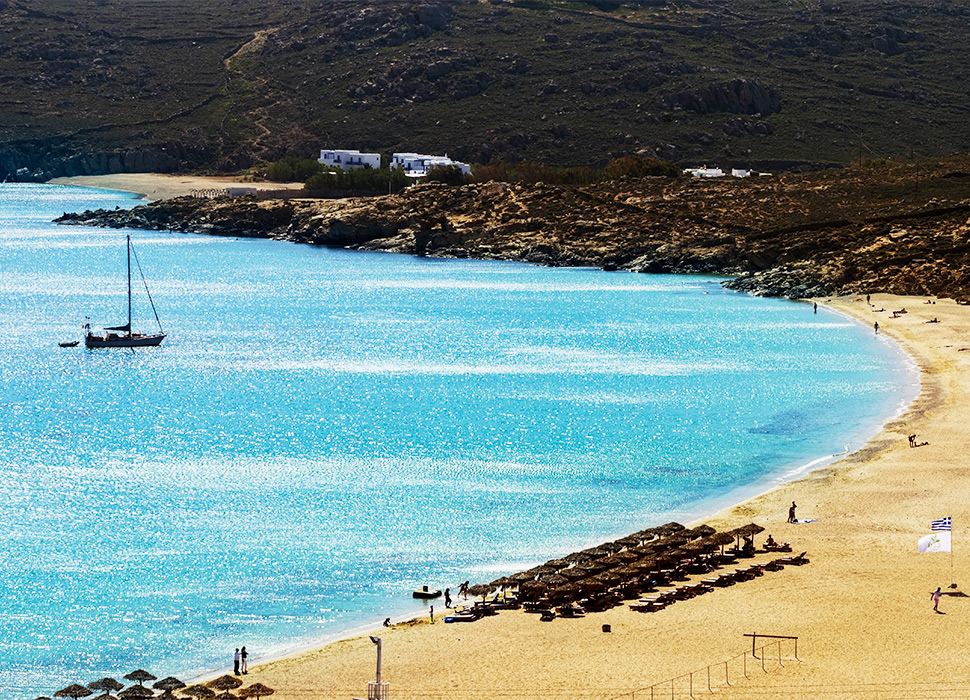 The largest beach on Mykonos is best accessed by boat, or by car/taxi along a winding 12km road from Mykonos Town. But once you’ve dealt with all the preliminary faff, Elia is where the fun is truly at. Wildly popular with the local gay scene, it’s also the island’s unofficial nudist hangout – so fair warning, if you’re prudish, it might be a good idea to take your bucket and spade elsewhere. For those who dig it here, plenty of sunbeds and good food and drink options make Elia a beach everybody should recline across at least once.

8. Sink a sundowner in Little Venice 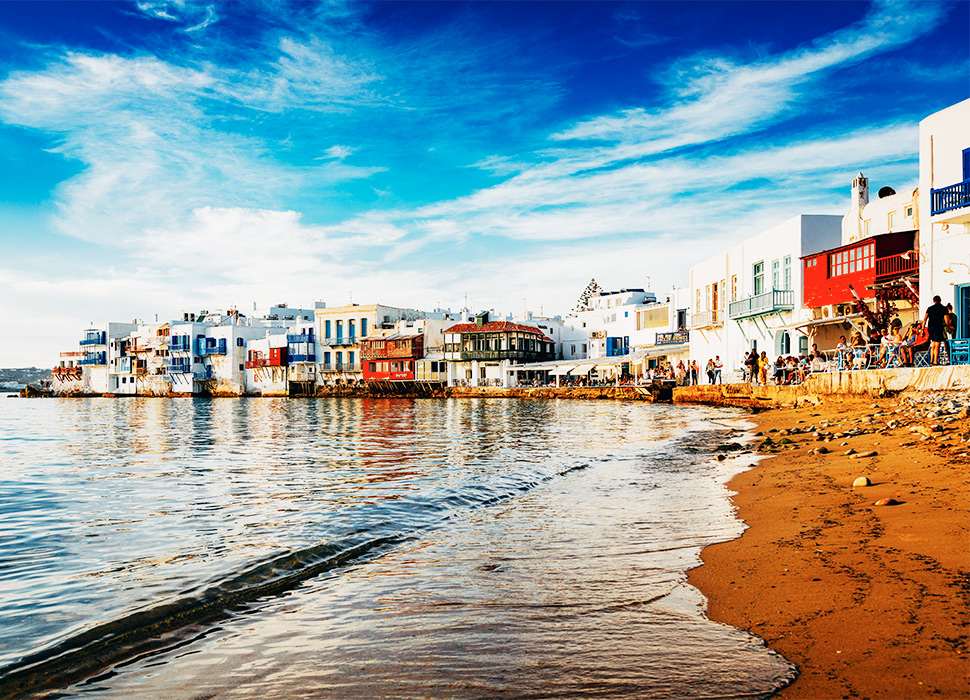 Get in the mood for mixology in western Mykonos Town / Image: Getty Images

It’s worth the effort finding just the right bar, and making sure you’ve a nice poky drink in your hand by the time the spectacular Mykonos sunset really gets going. Little Venice is a picture-perfect jumble of dinky sugarcane buildings that overhang the water on the western end of Mykonos Town. The terrace at Scarpa Bar, perched on the edge of the neighbourhood overlooking the Aegean, is pretty hard to beat for upscale cocktails, as is the comfy seating at Bao’s. Wherever you end up, be sure to drink it all in. 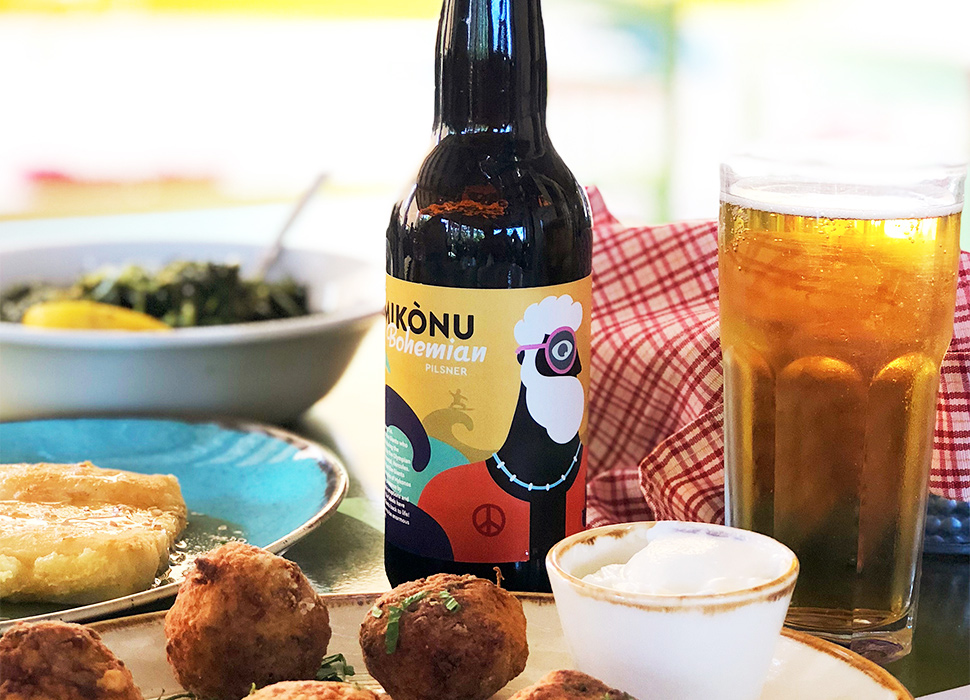 Despite its association in the popular imagination with nightclubs, the Mykonos drinking scene doesn't begin and end with two-for-one coloured shots. Nope, the Mykonos Brewing Company dole out some very choice brews – barrel-aged red saison, anyone? – and will gleefully show you around their shiny vats in the back office where the magic happens. Or, for that matter, share a flight with you in their buzzy taproom. Even the label design is Brooklyn-level on-point. Book a tour over the phone.

As you’d expect in such a sunny, fun-loving island paradise, folks on Mykonos are quite partial to a classic barbecue. Kiki’s Tavern, perched fetchingly above the beach at Agios Sostis, favours grilling its meat in the open air largely because it doesn’t have electricity. Hell, it doesn’t even have a sign, so the best advice is to follow your nose. For the ultimate experience, though, aspirational diners love Cine Manto in Mykonos Town, an open-air cinema set in a botanical garden (with its own resident pelican) and a chic health-conscious barbie menu.

The best hotels in Mykonos