Not just a pretty place, sun-kissed Kos has had a front row seat to a vast swathe of history – not least as the legit home of modern medicine. Here are our favourite historical sites across the island

Kos is cracking, but Greece is home to myriad romantic rocks to holiday on. Just ask yourself: which Greek island is right for you?

There are some absolutely timeless haunts in the Greek capital, as well. These are the most essential archaeological sits to visit in Athens. 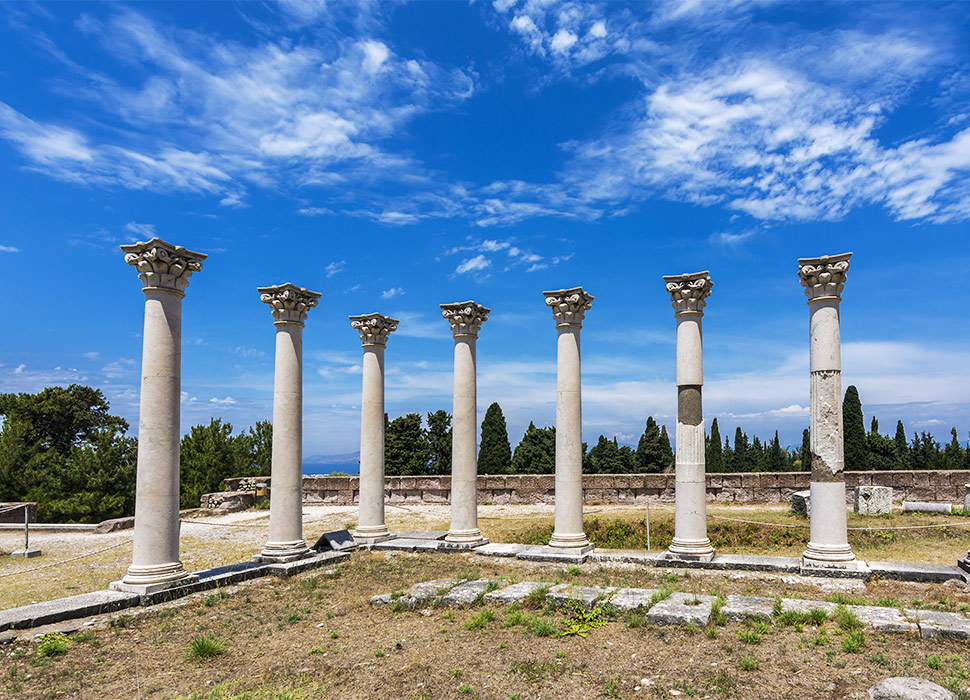 The ruined Asklepion is a picture of good health / Image: Adobe Stock

From about the 4th century BC, a series of temples was erected around the Ancient Greek world to honour Asclepius. The god of medicine – now there’s a job title – Asclepius was such a skilled physician he could apparently resurrect the dead. Or at the very least, if you spent the night one of the ‘Asclepeions’ built in his honour, he’d visit you in your sleep and cure you of your ailments. The ruined Askleipion on Kos is an especially fine example, with evocative and photogenic Corinthian columns. 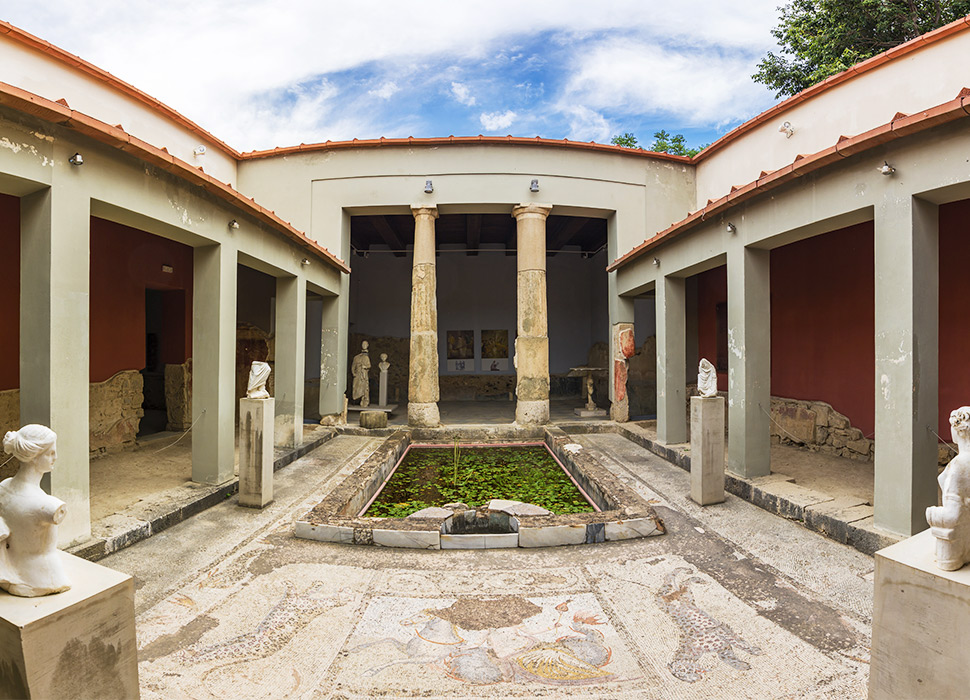 Make your way inside this modest-fronted Roman home – restored by visionary archaeologists following Kos’s devastating 1933 earthquake – for a great window into how the well-heeled lived back in the 3rd century AD. Sprawled over no fewer than 36 rooms, and arranged around three sizable atria, the walls are coated in dramatic and lavish mosaics depicting wild animals  – lions, leopards, dolphins, fish – while cooling fountains provide the finest air conditioning the ancient world had to offer. 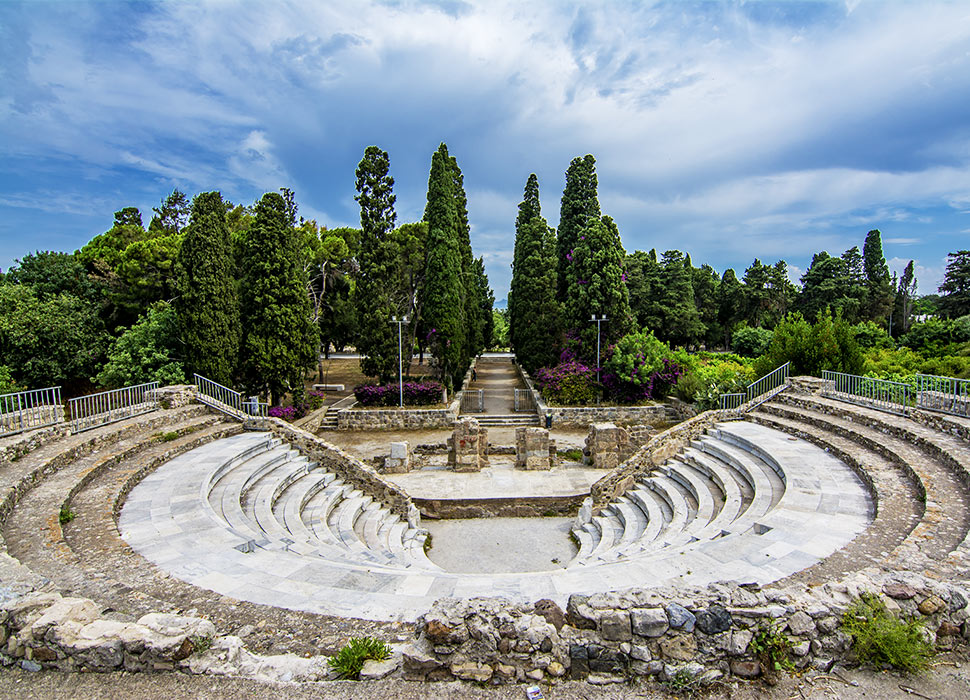 The Romans loved a good venue. And while it might not be quite on the scale of the Colosseum in Rome, the restored 2nd century AD Odeon of Kos saw its fair share of action. Historians reckon that in its heyday it even had a roof, and would’ve hosted up to about 750 guests for a lively mixed programme of theatre, music competitions, gladiatorial duels, and even sittings of the local senate. Discovered by the great Italian archaeologist Luciano Laurenzi in 1929, it’s a handsomely proportioned reminder that there really is no business like show business.

This remarkably well-preserved tomb, dedicated to a long-forgotten line of local military heroes, still retains its natty semi-circular roof despite being north of 2,400 years old. Inside its cool, not-at-all-creepy interior you’ll find two neat rows of crypts, six to a side. Some of the nicer original marble was snaffled by the magpie-like builders of the neighbouring Church of Stavros, but the structure is still impressive. Missing this shrine on your trip to Kos would be a grave error. 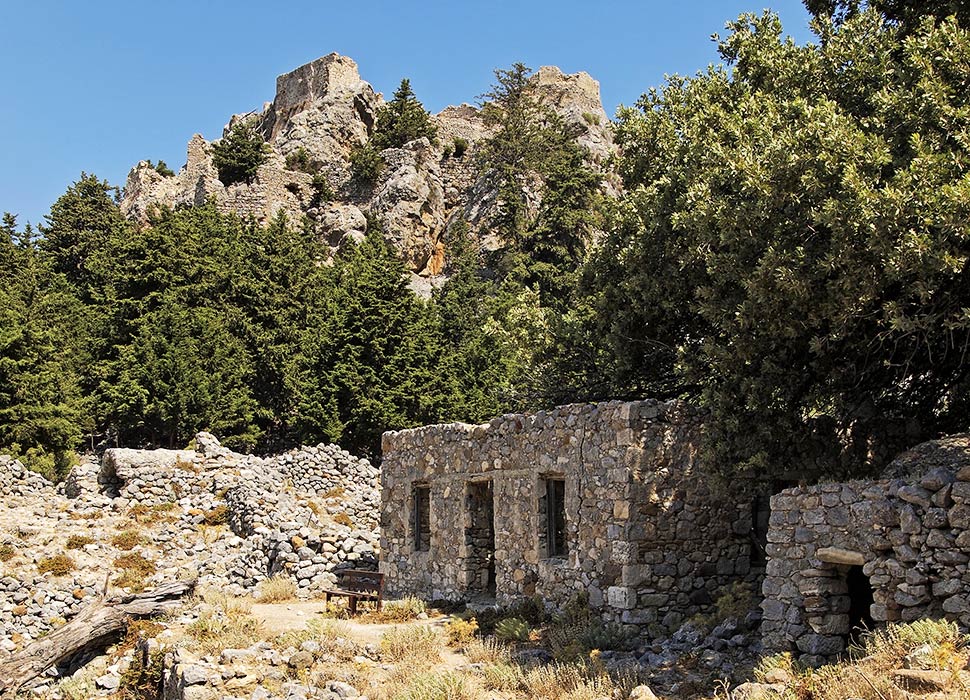 It might be a chillaxed and friendly holiday destination these days, but back in the day Kos was a site of great military importance. During the crusader era, skirmishes between locals, the Knights of the Order of St John and the Ottoman Turks just over the water forced the building of mighty fortifications, like this ruined gem atop Mount Dikeo. Various bits have been built and torn down over the years, and the present-day hike up the hillside and ruined staircase is not for the fainthearted. But the sunset photo ops – and the café up there – are worth the conquest. 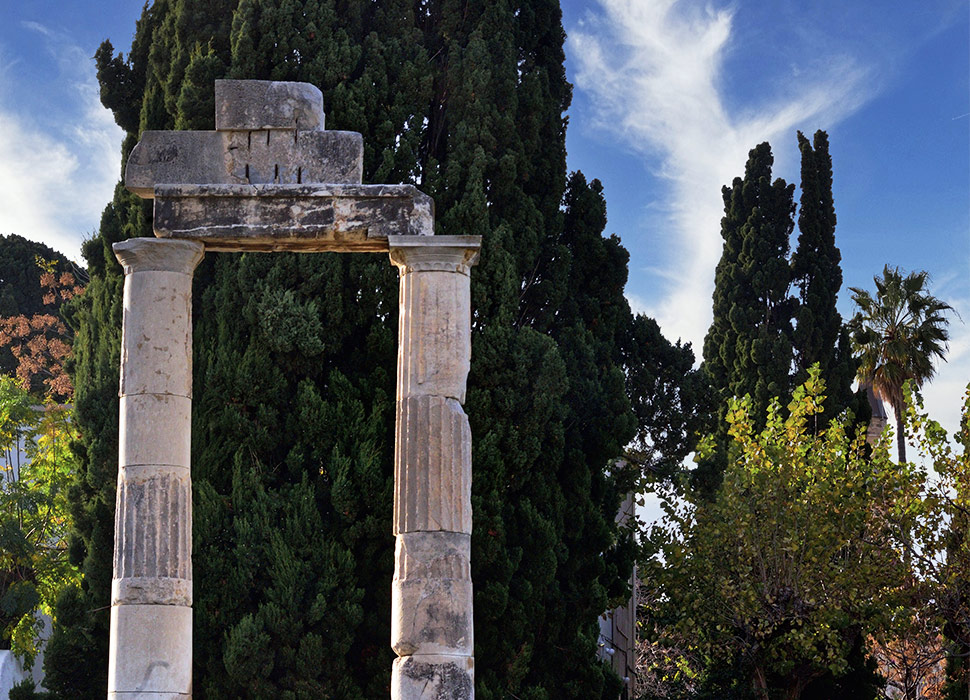 There are ruins to Dionysus for at this boozy landmark / Image: Adobe Stock

Dionysus – or Bacchus in Roman – was the ancient Greek god of wine and general merrymaking. So when Kos was enjoying a bit of an economic purple patch back in the 2nd century BC, a great public works project let to the creation of a pi-shaped altar erected in the great deity’s honour. Buried and largely forgotten about until the 1933 earthquake, the layout has since been uncovered and you can mooch around it for free, paying your own silent tribute to the holy king of vino. Just lay off the animal sacrifice – just because the ancients did it here, doesn’t make it okay now.

7. Mosaic of Hippocrates and Asclepius

The Archaeological Museum in Kos is an absolute must for history fans visiting the island. Replete with heroic statuary, ancient pottery fragments, and illuminating guides to the long and turbulent history of the island, the real finds here are the mosaics painstakingly transported from assorted villas and the agora around Kos. The best example – a mosaic dominating the floor of one of the larger galleries – depicts the arrival of Asclepius on Kos, greeted by a decidedly buff-looking Hippocrates and a starstruck local. A great shout for an afternoon on the tiles.

Thee's nothing plane about this ages-old tree / Image: Adobe Stock

Father of modern medicine Hippocrates – you’ll have heard about the Hippocratic oath – hailed from these parts. Legend has it, he taught his early bright-eyed medical students under the shady branches of a plane tree. That was 2,400 years ago, but the magnificent, 12-metre-crowned oriental plane currently dominating the square in front of the Castle of Knights is said to be a direct descendant. Cuttings have been cultivated in the grounds of countless medical schools around the world, but a pilgrimage to where it all started is just what the doctor ordered.

Want to properly immerse yourself in the life of classical-era Kos? Make time for a mooch around the Ancient Agora. Exposed after the colossal 1933 earthquake, and sensitively restored by a crack team of Italian archaeologists, the agora – which basically means ‘marketplace’ – reveals the layout of the city as Hippocrates would’ve recognised it. There are shops, houses, a lavish shrine to the goddess Aphrodite and a temple of Hercules. Some say it’s the first recorded town to be laid out in blocks – if you like history, this'll be right up your street.

The classical era was by no means the beginning of life on Kos. As old to Hippocrates as Hippocrates is to us, prehistoric folk eked out a living on the island too, making their home in a white stone cave on Mount Zini called Aspri Petra, in the deep south of the island. Not a lot survives from those who set up camp here 3,000 years ago, obviously, but if you can hack the moderately challenging climb – bring a picnic – the feeling inside the karst cave where Kos’s neolithic inhabitants once lived, laughed and loved is timeless.