The rocks at Spilia, where Cohen and co swam / All photography: Ben Roberts

The Aegean island of Hydra was a paradise for Cohen and other artists in the 1960s – and not much has changed since. We travel there to dip a toe into the past

The rocks at Spilia, where Cohen and co swam / All photography: Ben Roberts

There are three of us sat around a table in the midday sun. “This island is famous for Leonard Cohen,” says Polly Samson, the celebrated novelist. “But it’s not his.” Her husband Dave Gilmour, of the band Pink Floyd, nods in agreement as we knock back silty Greek coffees from the café. It’s beautifully warm and we’re chatting outside family-run Roloi on the Greek island of Hydra.

Back in the 1950s, before Cohen and long before us, this kafeneion was known as Katsikas and it played host to a famous collective of free-spirited creatives. Samson reels off their names as if they were her good friends: “George Johnston, Charmian Clift, Peter Finch, Sidney Nolan, Marianne Ihlen…” 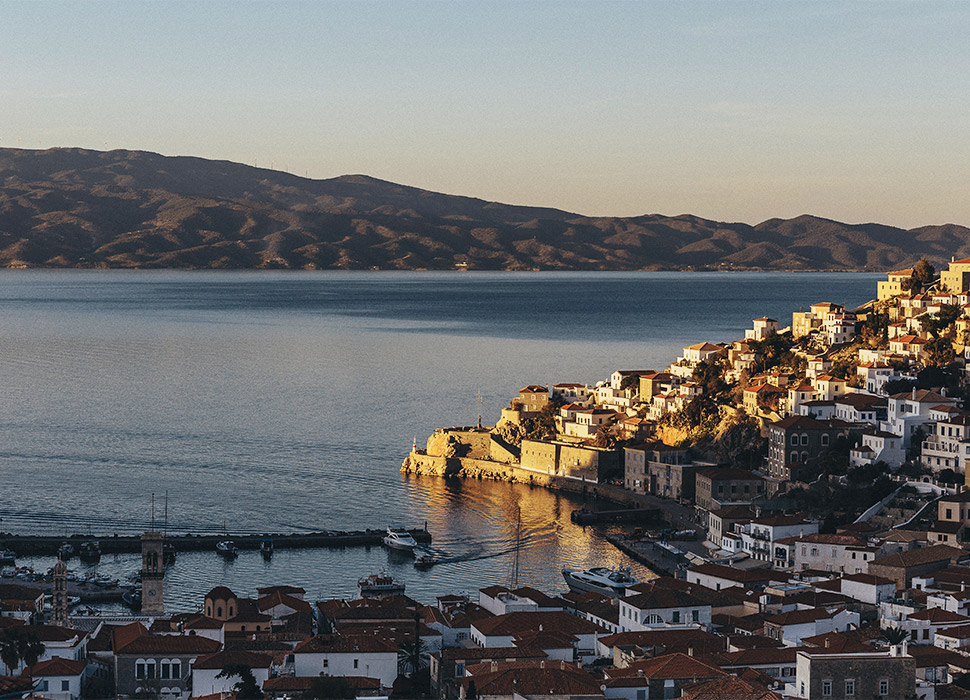 It was in 1960 that Leonard Cohen, then a relatively unknown poet and singer, arrived from Canada to join them. The group would spend lazy days diving off the rocks that plunge into clear, aquamarine waters, and soulful nights singing and strumming under the stars. “They were incredibly brave,” Samson says of her creative predecessors. “They gave up everything in their own countries to come and live in this remote place where they had no escape because they had no money.”

Brave, yes, and yet that was the whole idea. Centred on the Australian journalists George Johnston and Charmian Clift, the bohemian throng lived on Hydra year-round, taking advantage of the total lack of connection to the outside world – the island was without phone lines at the time. Cohen bought a house and, with Norwegian Marianne Ihlen as his muse, began gathering material for the songs that would launch his musical career, including So Long, Marianne. The rest is history. 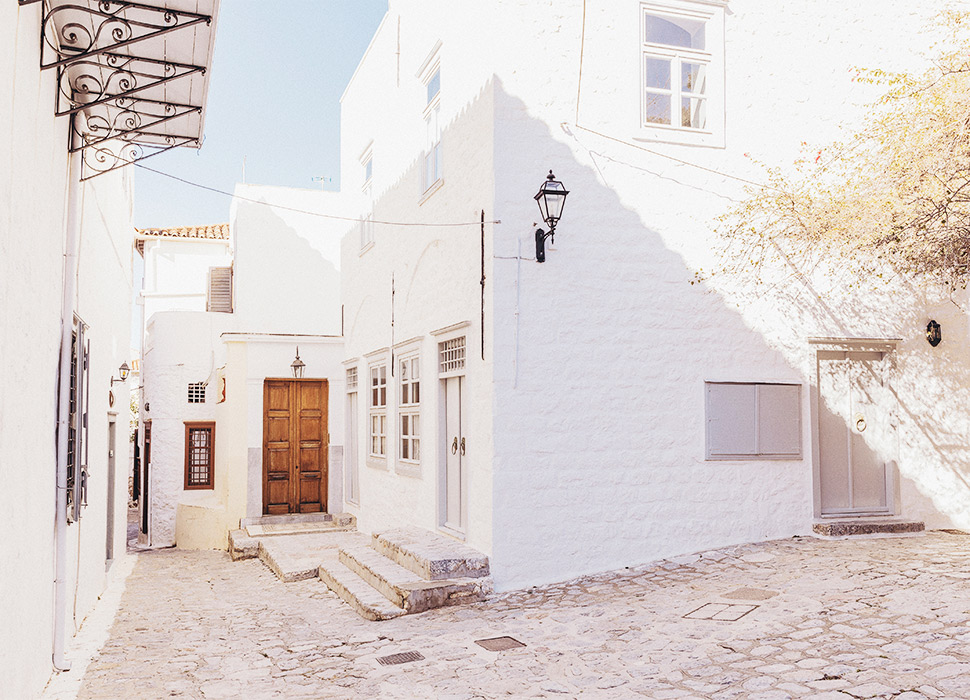 One of Hydra's pretty, sun-dappled alleys

“Over the years, Cohen became so famous that he eclipsed the other people in that community,” says Samson, who owns a house here with Gilmour. Her extensively researched bestselling novel, A Theatre for Dreamers, came out earlier this year. Set on Hydra, and based on the lives of these overlooked trailblazers, it brings that world vividly back to life.

Still, it’s for the Cohen connection that most in-the-know travellers make their way here. Climb the hill past the clock tower and Roloi, where we sit, and you’ll find the house where he lived hidden deep within the labyrinth of bougainvillea-strewn streets. Gaze up at its high walls and imagine the creative torment that raged within – if you like. 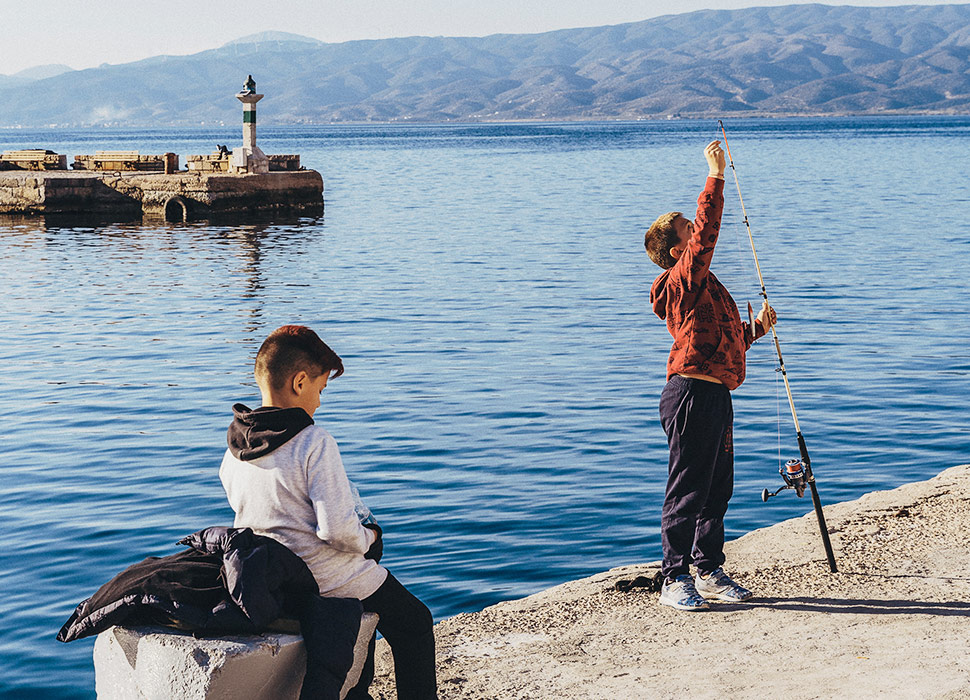 Hydra is a beguiling time-warp of an island

In truth, the house gives little away. But you don’t need to investigate too deeply to discover Hydra’s most astonishing secret. This island is a time warp; despite being less than two hours by ferry from Athens, tourism has barely made a mark on its cobbled streets, along which mules still trudge – there are no cars here, and all travel is by foot. As one clops past me, the line between now and then feels increasingly blurry.

The writer Henry Miller stopped by Hydra on his travels through Greece in 1939 – a bid to escape American consumerism and find a simpler way of living – and praised the island for its timelessness. “This rock is a living rock,” he wrote in The Colossus of Maroussi, “a divine wave of energy suspended in time and space, creating a pause of long or short duration in the endless melody. Having touched this rock I lost all sense of earthly direction.” 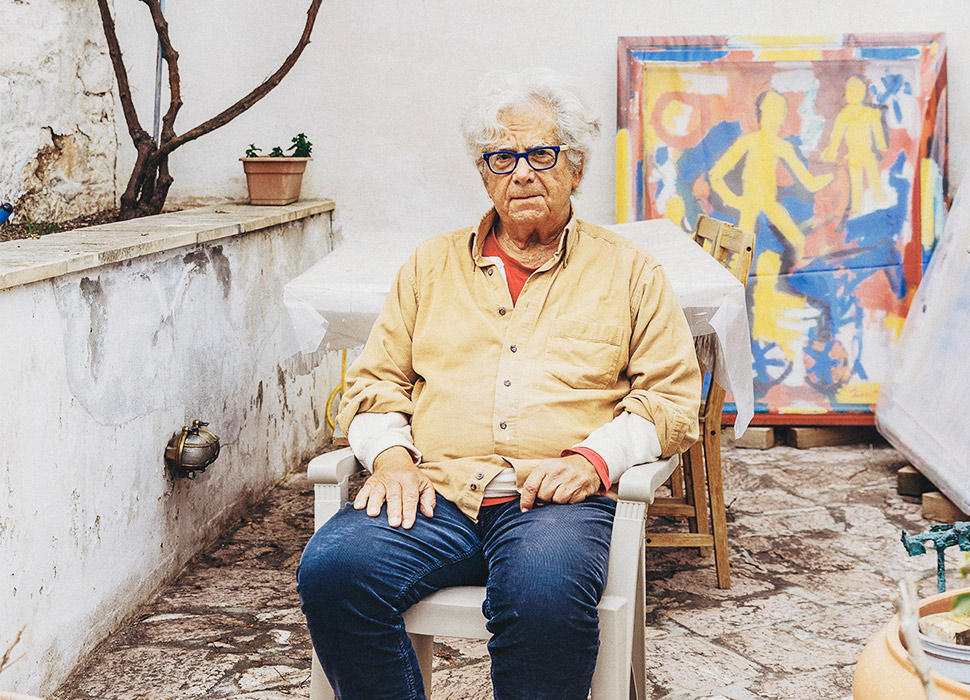 Artist Michael Lawrence takes a break in his studio

A stroll up into the hills and on to the villages along the coastline such as Kamini reveals wizened fishermen tending to their nets and old ladies dressed in black, their pale wrinkles so deep the sun no longer tans them. In between the more typical whitewashed houses with blue shutters, Hydra is dotted with stone dwellings, built like forts, that have remained unchanged for hundreds of years – passed down the generations from Ottoman traders to Venetians to modern Greeks.

In the 1950s, the island’s aesthetic charm was favoured for films such as Boy on a Dolphin, starring Sophia Loren. Hollywood descended on this impoverished speck, bringing with it a wave of creative minds that spread the word of Hydra’s beauty. Indeed, it was by way of an audition for the part of the boy in Boy on a Dolphin that another long-term resident of the island, artist Michael Lawrence, first came here. 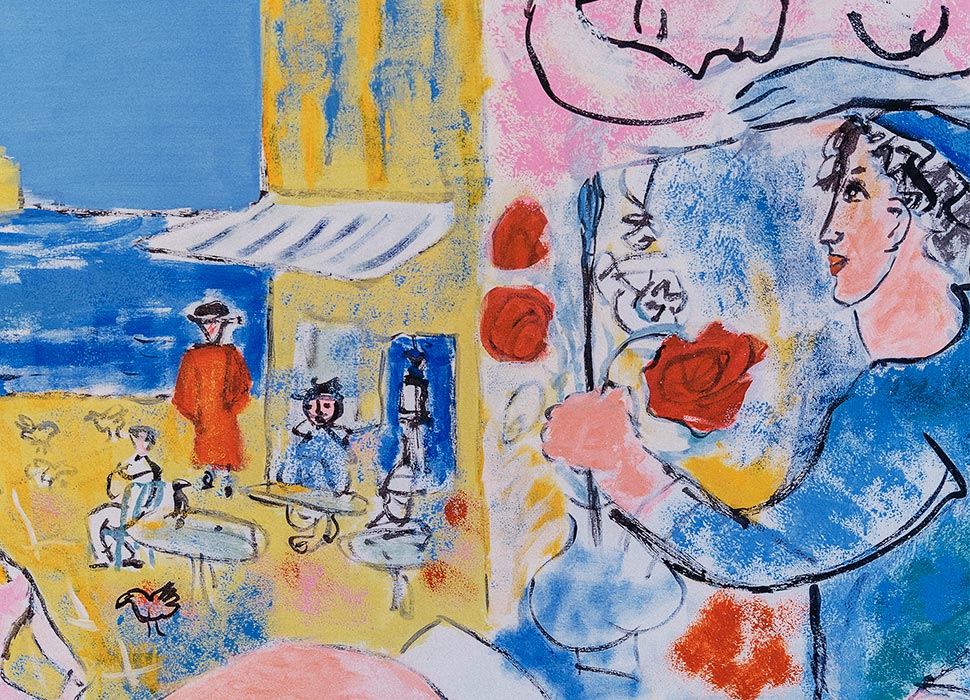 A vividly evocative work by Lawrence

“Of course, I didn’t get the part, but Hydra left an impression on me even at that age,” he says as we tour his studio, stacked wall-to-wall with canvases. It wasn’t until 40 years later, however, when he was reading Miller’s Colossus of Maroussi, that Lawrence made the decision to leave his native LA and come back to the ‘living rock’.

Did it seem very different from America’s West Coast? “You adapt to whatever medium’s at hand,” he shrugs, pulling out watercolours tucked neatly into enormous folders. He guides me past legions of bronze sculptures, as blasé about his prodigious output as he is about his book Tripping with Jim Morrison & Other Friends, which lies open on a table.

“There was always so much interchange between the artists that came here, between successful writers, painters and composers – they helped each other and showed up at convenient moments,” says Lawrence. 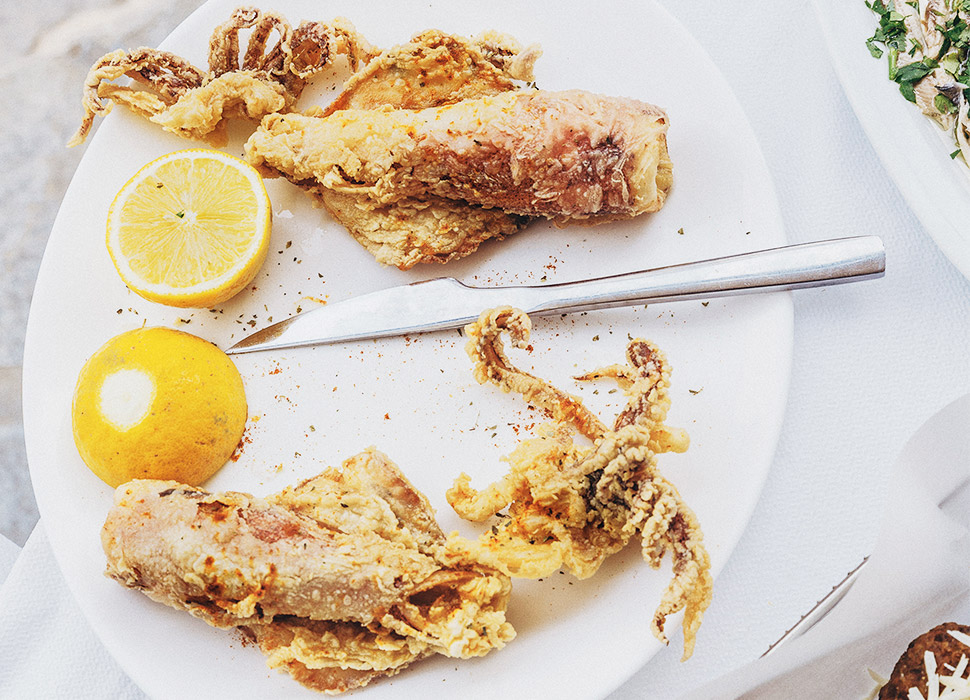 Just a 10-minute walk from his studio, artist William Pownall sits in his own space, peering out of a window that looks directly onto the pretty harbour full of fishing boats. Born in Britain, and educated in Australia, he arrived on Hydra in the 1960s, and attests to the welcoming nature of the group he’d soon call friends. The corners of his mouth curl into a wry smile as he recounts being ushered into a “marvellous” back room at Katsikas, where the owner, with minimal English, abandoned him to a tight group of foreigners deep in conversation.

“I felt like I was intruding because they were all having a laugh before I walked in, but a man at the table said, ‘If you’re from Australia, sit down.’” That man was George Johnston. “There it began,” says Pownall, who has barely left the island since.

Turning his mind back 60 years, he recalls a primitive place, without running water, working electricity or even toilets. Rain would supply water to a house. “It was peaceful and where there was no electricity, there was the light of the stars and the Moon, and that was magical,” says Pownall, smiling at the memory. 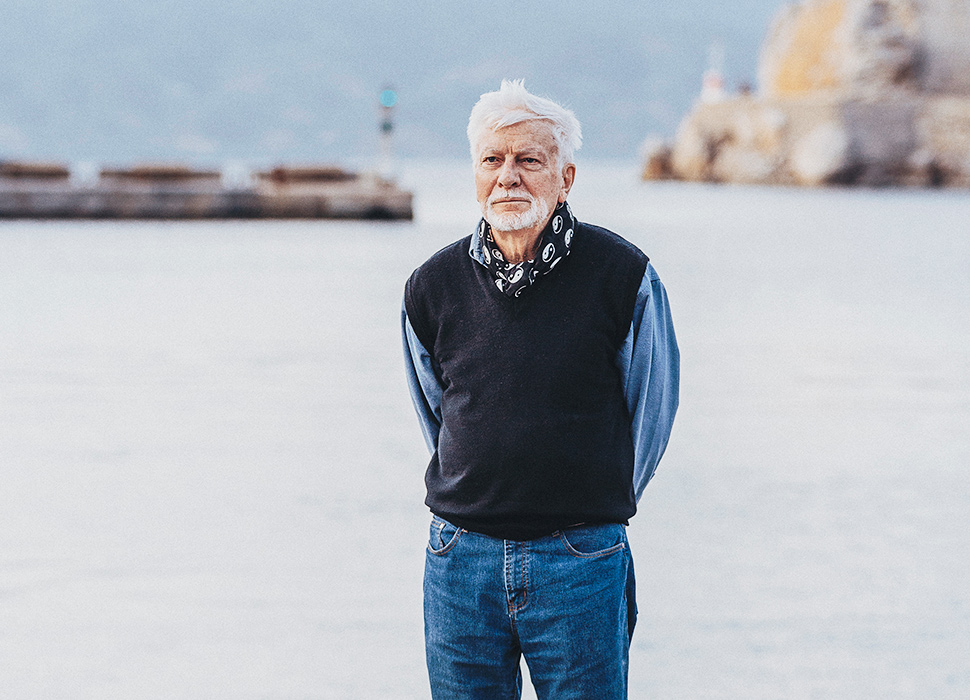 When it came, the intrusion of the modern world to Hydra created music history: Cohen’s Bird on the Wire was written in response to the sudden appearance of telephone lines. More mod cons have arrived since, but the island remains the same in its most important aspects. “The landscape is the landscape,” says Pownall. “It hasn’t changed. Neither have the buildings. Very little has changed here. Sensitive, perceptive people realise they’re in a special place.” He looks pointedly out of the window at the port, which remains frozen in time.

It’s not just established artists who find a home on this Aegean outpost. The Athens School of Fine Arts has an annexe here – a grand building that will temporarily house anyone with an art degree at a fraction of the cost of a hotel. In addition, arts foundation DESTE takes over a former slaughterhouse every summer to bring in exhibits by the likes of David Shrigley, Kiki Smith and, next year, Jeff Koons. 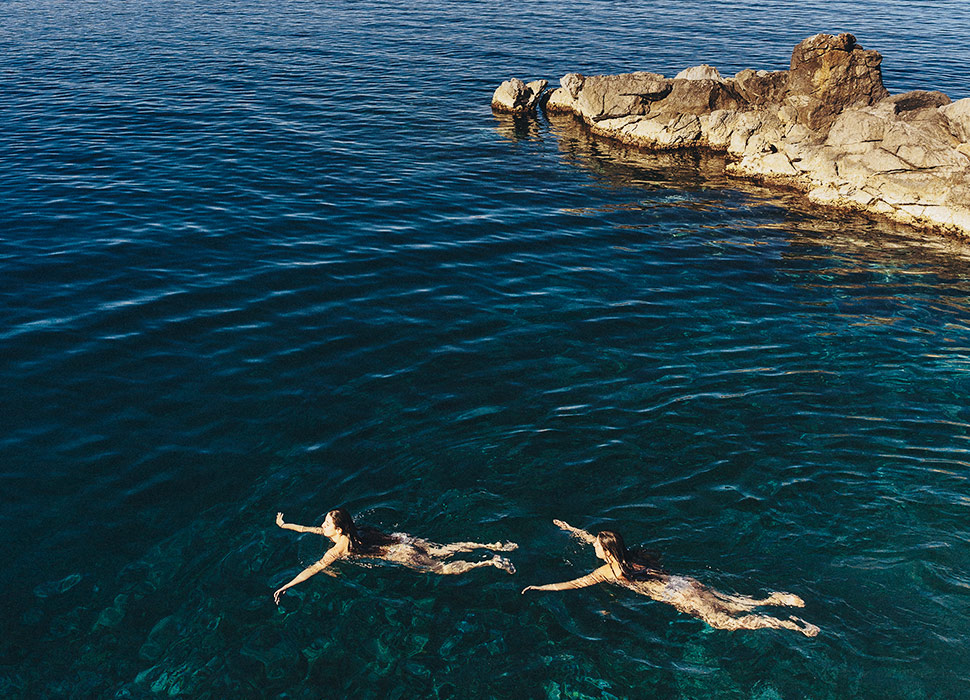 Hydra is still a quiet place. It lacks the sandy beaches and overt luxury of other Greek islands, instead offering cool, clear swimming spots within pebble-strewn bays. My walk takes me to Spilia rocks, where I encounter two Greek girls, Alexia and Ellie, taking their first dip of the year in the very place Cohen whiled away balmy summer evenings with Marianne Ihlen.

“People have to really decide to come here,” says Dave Gilmour. But the rewards are obvious. The trouble comes when visitors decide to leave – especially if they’re creative. They should know that Hydra does not let its artists go so easily.