From pretty-in-pink lagoons to golden crescents that feel like the Caribbean, this Greek island paradise has a beach to suit you, whatever your vibe. Here’s our pick of the best 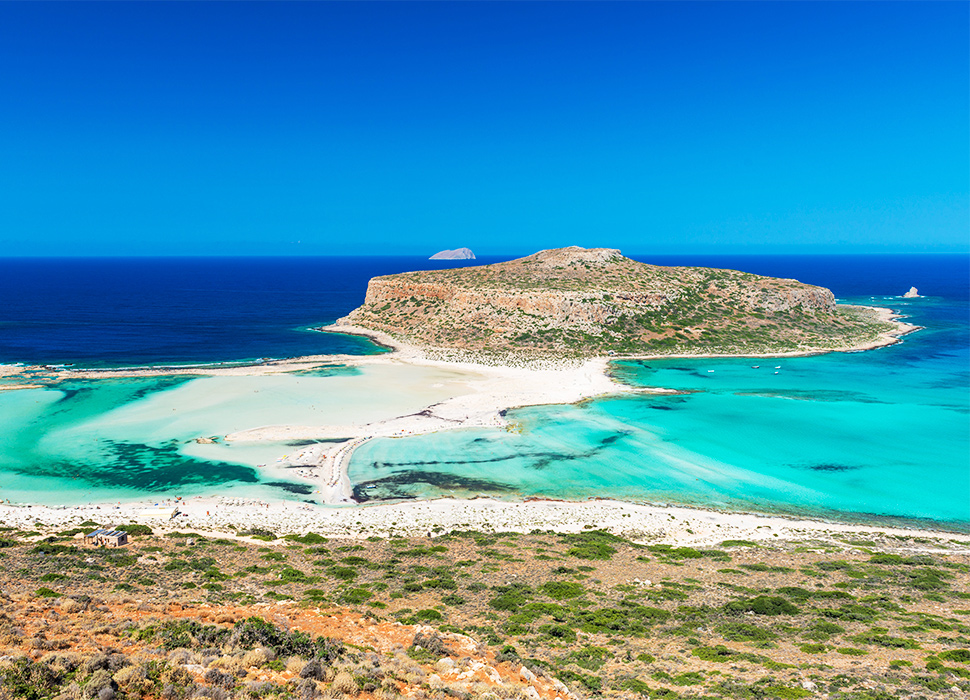 Cover star of a thousand glossy aspirational brochures, Balos is certainly blessed in the looks department, with its uniformly bone-white sand and iridescent turquoise surf. It’s not the easiest to reach, which is all part of the fun – take the dirt track over those scrubby hills, and pack a picnic as there’s no facilities to speak of. But on arrival you’ll probably get to meet the locals – falcons, monk seals and even the odd turtle. 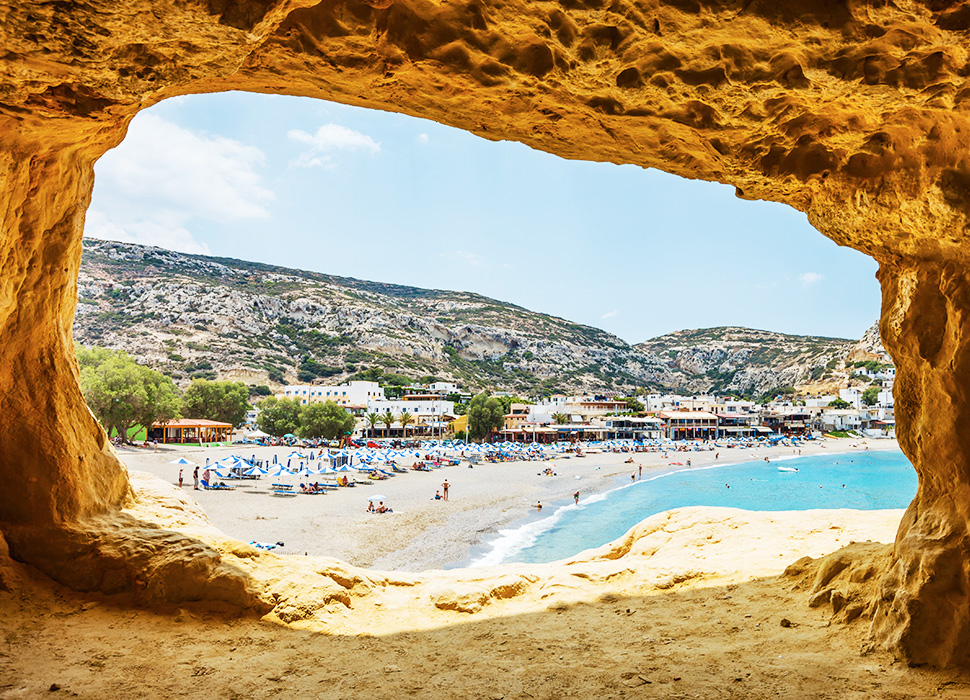 Shelter from the sun in one of Matala's coves / Image: Getty Images

Immortalised in song by Joni Mitchell, no less, the honeycomb-like sandstone cliffs around this picture-perfect beach on the south coast of Crete were once a magnet for hippies during the 1960s. Nowadays Matala is markedly less boho, and the gentle rippling waves can be enjoyed from the terraces of a number of upscale restaurants with a nice glass of wine in hand. Don’t know what you’ve got till it’s gone? Nah, it’s still very much a paradise. 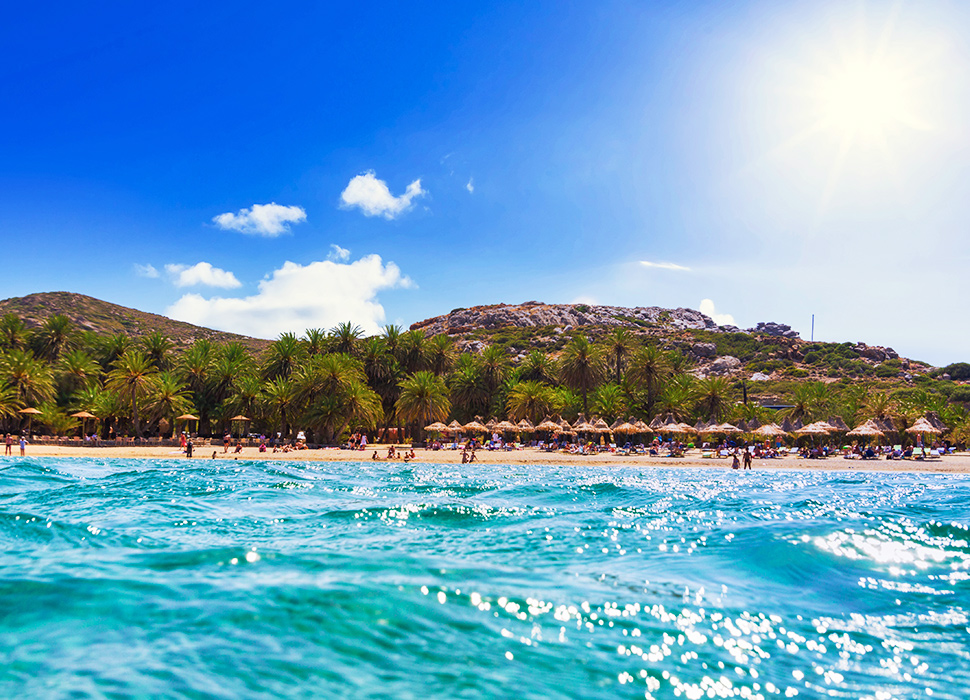 Out in Crete’s far eastern Lasithi province you could well be forgiven for thinking you’d landed in the Bahamas. A sizeable grove of gently swaying Cretan date palm trees on one side, and a shallow azure bay dotted with attractive coloured rowboats on the other means Vaï beach gets as busy as you would expect. When you’re quite done checking out the bronzed locals, wander up the road to the Itanos archaeological site, a ruined port mentioned by classical-era bigwig Herodotus. 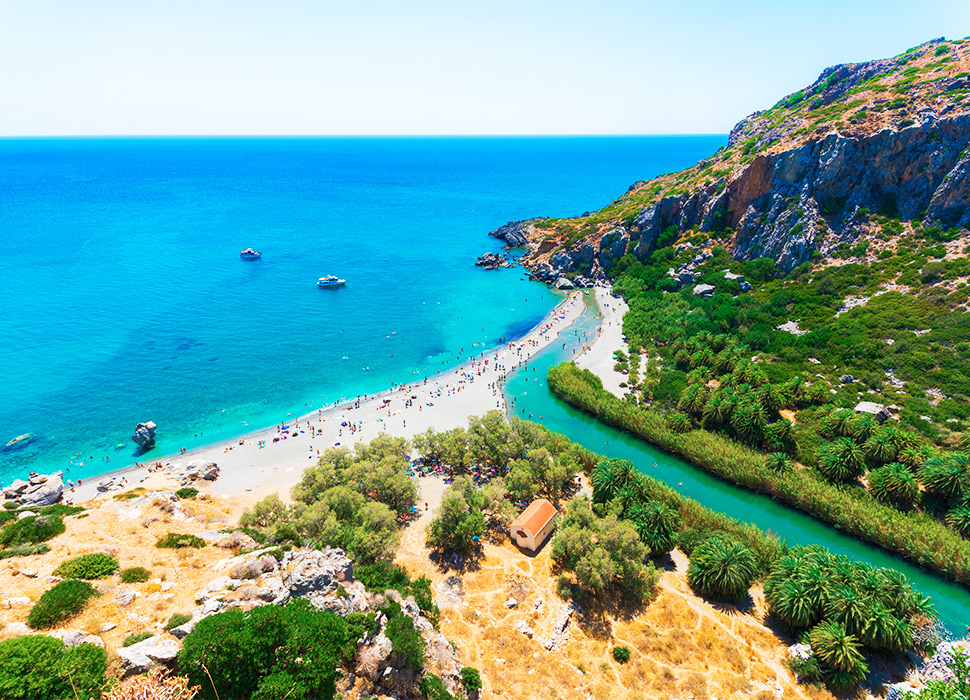 Due to a happy quirk of geography, this southern sandy gem is situated at the point where the brilliantly made-up-sounding Megalopotamos river flows out of Crete’s mountainous interior into the blue Libyan sea. Its riverbanks are thick with lush, tropical vegetation, making it feel like you’re marooned on some savage remote island, and the steep path down is not for the faint-hearted. But the sense of childish wonder you’ll experience, plus famously-good snorkelling, make Preveli a clear winner.

Get tickled pink by the waves at Elafonisi / Image: Adobe Stock

Mostly famous, and quite rightly, for its pinkish hues – after centuries of seashell particles washing up and over the sandy shore – Elafonisi isn’t technically a beach at all. It’s a small island, isolated by the mainland by a slender finger of sand, that’s covered by water at high tide. Still, let’s not quibble – it’s a truly ravishing and really quite dreamy backdrop for scoffing a picnic or vanishing into a good book. There are no facilities, which just adds to the raw beauty, and just like the nudists who stake out a spot on the far side of the dunes, it’s probably better that there’s not much on here.

Where to tuck into the Isle of Man's world-beating produce