Holidaying on the pretty Greek island, you're bound to come across one distinctive tipple more than any other: the fluorescent-and-flavoursome kumquat liqueur. But what exactly is this arancia aperitif, and why are Corfiots obsessed with it?

All liquered up and out of ideas? These are the best things to do in Corfu.

Then, we've sorted through the tourist traps to find you the best restaurants in Corfu, too.

What on earth is it? 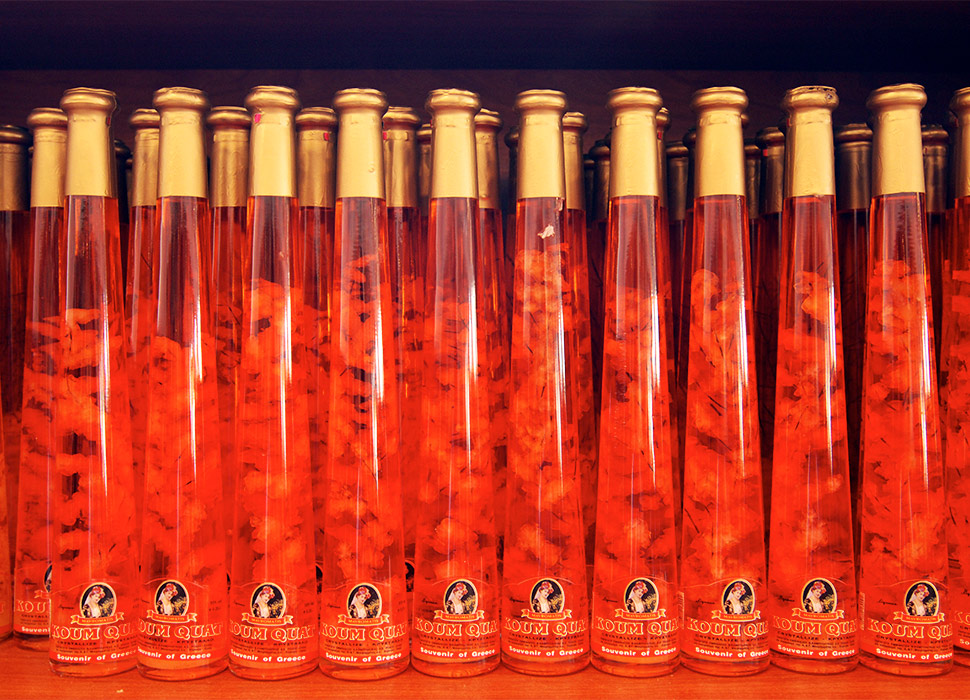 Corfu's juicy infatuation with the kumquat was the result of a British botanist’s meddling in the natural world. In the 19th century, Sidney Merlin, a citrus connoisseur and Olympic sharpshooter, imported dinky, orange and olive-sized “kam kwat” (“golden fruit) trees from China to Corfu. His fruit shoots thrived in the shade of the verdant Nymfes Valley, where the fertile soil, abundant trickling waterfalls and mild climate mimicked the tropical valleys of southern China – where kumquats had been grown since ancient times.

The pulp may have been too bitter for some palates, but that didn’t stop the Corfiots from sweetening the deal: marmalades, Turkish (well, Greek) delights, and even perfumes were cooked up with this zingy new import. But one product was a cut above the rest: kumquat liqueur. Even monks were partial to a bit of moonshine, and best of all, it was easy to make/ All that’s needed is a spirit of your choice, sugar, and plenty of patience. The kumquats were pierced, dropped into a vat of vodka, stirred with sugar and left to stew in a darkened room for 40 days – a poignant period of time in the Greek Orthodox religion.

Since 1924, production of kumquat liqueur has been dominated by pro distilleries. The most famous, Mavromatis, uses 80 per cent of Corfu’s home-grown kumquat crop, annually doling out a million bottles of the citrusy stuff – oh, and 50 tonnes of kumquat spoon sweet (the fruit stewed in sugar water, basically), made from the boozy by-product. 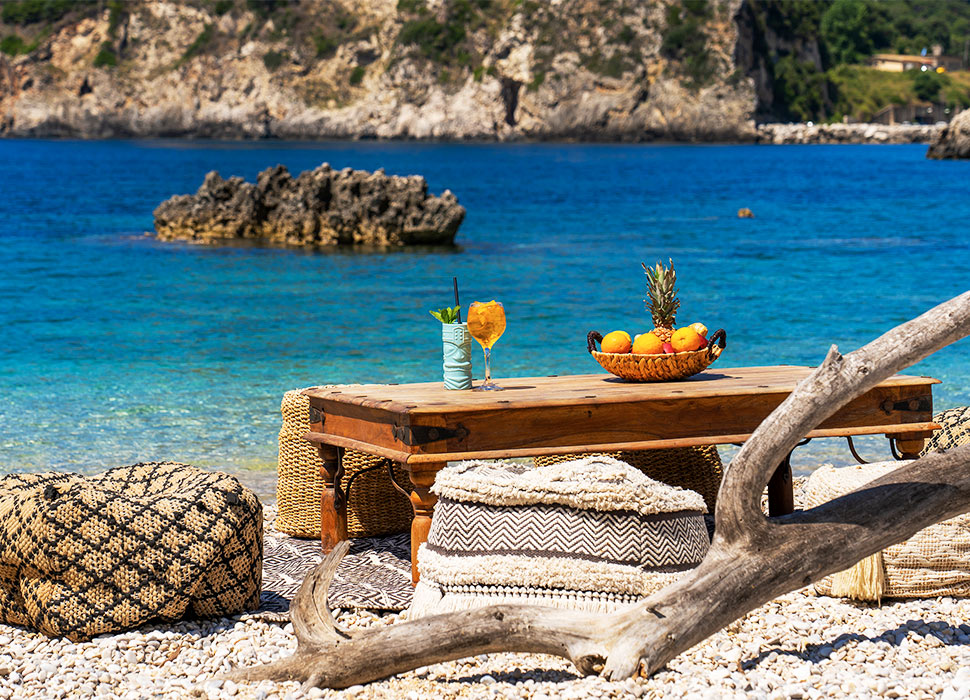 Want to buy a bottle? You’re in luck: there are three different varieties to choose from. The klassiko (it’s all Greek to us) is the luminescent orange one, a sweet and strong tipple made from saccharine kumquat peel. Then, there’s a yellow version made from tangy kumquat juice, seductively served over ice to the soothing sound of mandolin music and Adriatic waves.

If your desires are more floral, go for a dose of the clear stuff – that’s white kumquat liqueur made from the tree’s neroli-like blossoms. This one’s best as an apres-dinner toast. No matter which you choose, there’s one rule you should always abide by, if quality is the aim: the alcohol percentage should always be between 20% and 25% ABV.

So, now you know everything you need to know about Corfu’s signature shot – except for where to buy it. If you’re seeking a souvenir to add to your exotic booze shelf, buy one of the Corfu-shaped bottles on Filarmonikis Street, as it’ll complement those half-drunk bottles of Canarian rum and Polish krupnik. But if you actually want to recreate the joys of your Corfu holiday back home with a kumquat cocktail, here are the most delectable distilleries around… 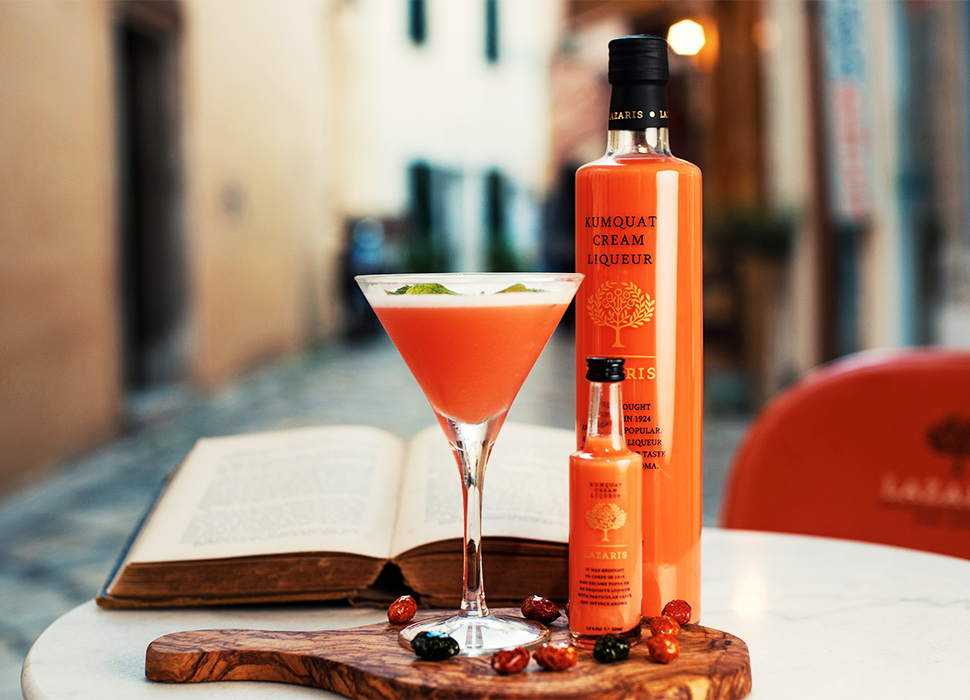 Family-run and established in 1965, Mavromatis is (arguably) the OG kumquat liqueur producer. Take a tour of the factory – yes, there’s a free tasting – and pick up a bottle of the good stuff for between €12 and €15.

Another heritage producer – the only one with a Protected Geographical Indication accolade – Lazaris flies high with creative takes on Corfu’s chosen shot. Try the kumquat cream liqueur for a Greek take on your midnight Irish cream shot. Bottles from €15.

Finding a bottle of the “Corfiot Lady” can require a little creativity, but once you see her friendly face beaming at you from a bottle of Vasilakis’ spicy ‘n’ sweet liqueur, you’ll know you’ve come to the right place. Regular bottles from €11, but go fancy and get yourself an amphora for €16. There’s even a version with a crystallized kumquat in it, so you can refill it with vodka, and enjoy the flavour all over again.

Three perfect places to drink it 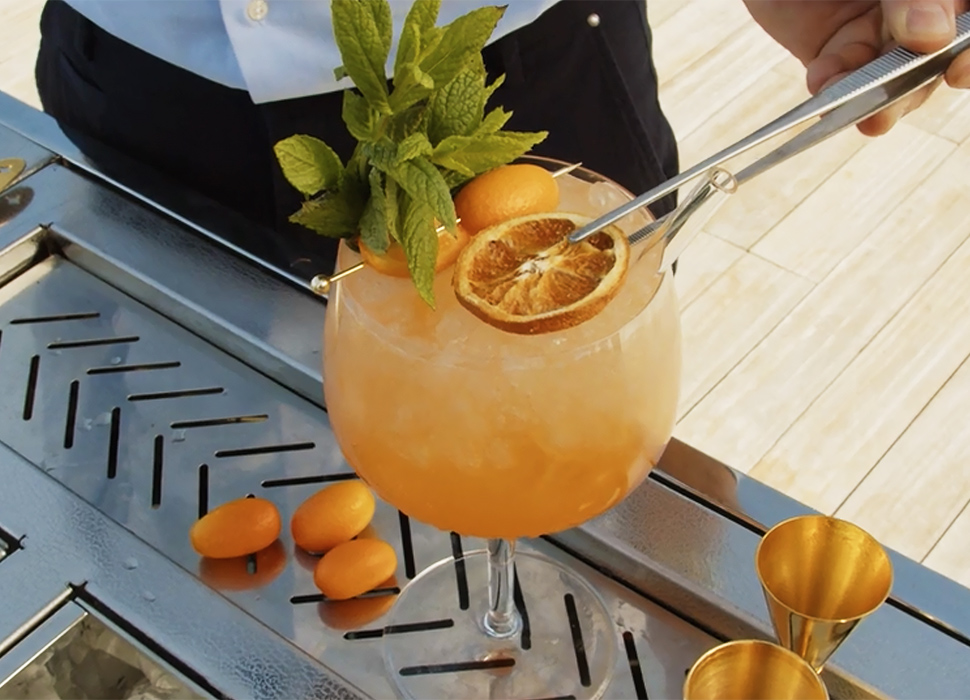 Where better to try the Sino-Greco kumquat than at Angsana, an Asian-inspired luxury hotel? Kumquat trees are cultivated on the grounds, and their signature cocktail comprises kumquat liqueur, fresh kumquat juice, and – you guessed it – a couple of kumquats on top.

Sipping kumquat liqueur on Corfu Town’s elegant waterfront is never a bad idea, but if you more than just a free shot at the end of your meal, head to Avli – the succulent pork tenderloin, topped with stewed kumquats and homemade kumquat sauce, is practically famous round these ‘parts.

Palaiokastritsa’s heart-shaped bay is enough to make anyone fall in love, and we think you’ll adore beachfront bar Akron’s Corfuland cocktail; the local answer to an Aperol Spritz, with prosecco and Corfu’s other specialty, ginger beer, in the mix.