The most Instagrammable spots in the Greek Islands

You’re spoilt for choice when it comes to bagging the perfect photo around the Greek islands. Here’s our guide to snapping the most envy-inducing eye candy in this stretch of the Med

All these spots are very, very lovely. But hey – so are the best lesser-known coastlines in Europe.

For something a little more rugged – and potentially closer to home – these are the most scenic long-distance walks in the UK. 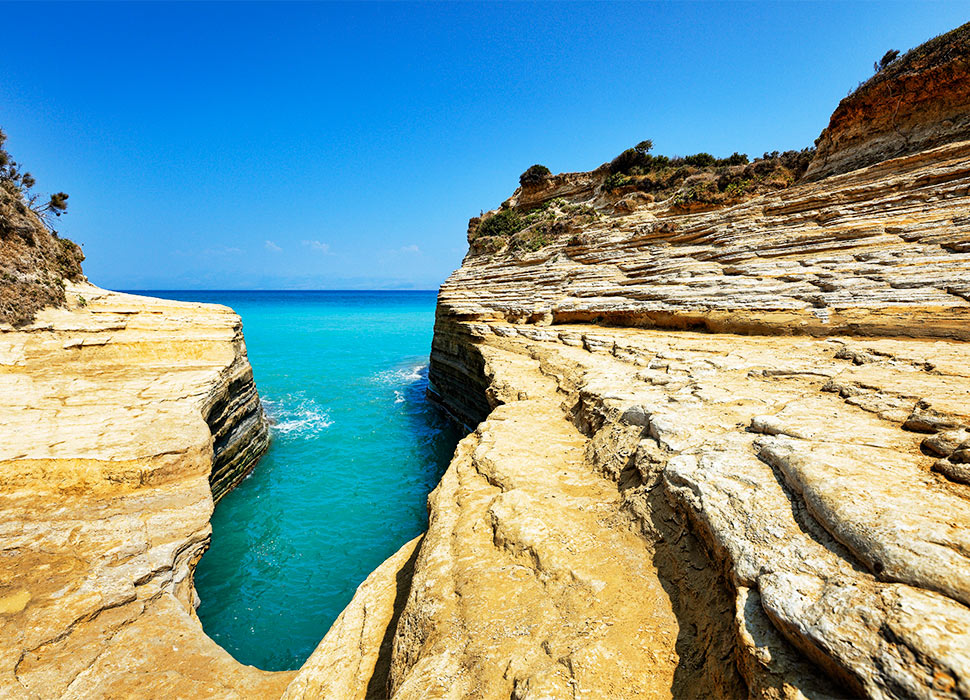 This might just be Corfu's most intimate inlet / Image: Alamy

Down in Corfu, centuries of gentle erosion by the Mediterranean's wind and tides have crafted this bewitchingly lovely – the clue is in the name – natural hollow sandstone inlet. When you’re quite finished capturing Canal d’Amour’s exquisite, polychromatic curves on camera, be sure to take that special someone you’re with for a dip. Legend has it if you go for a swim here alongside your beloved, you’ll stay together forever. Just make sure they’re cool with that first. 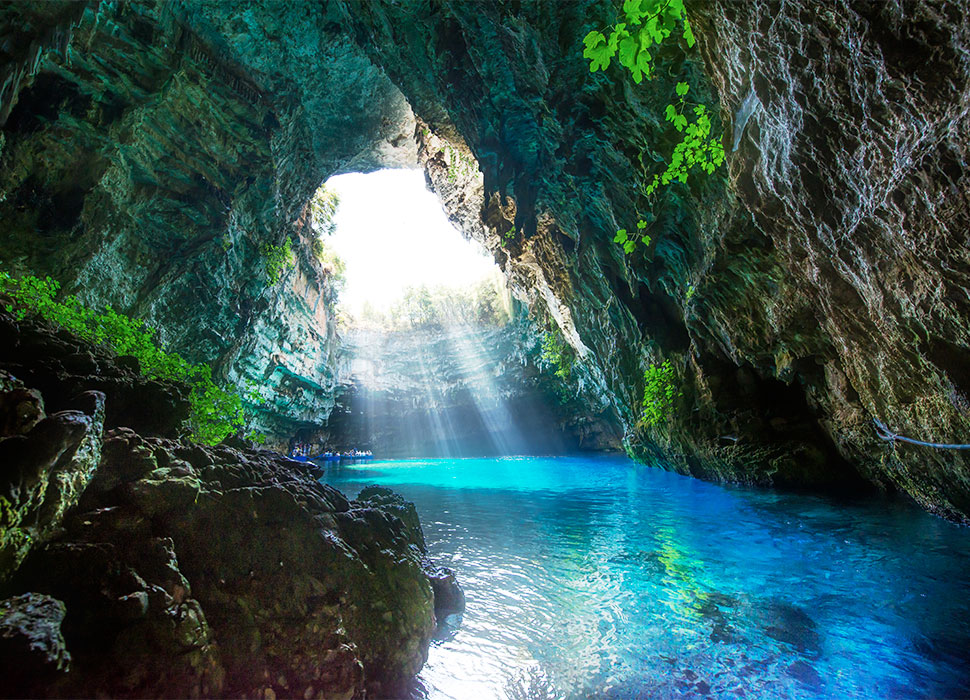 Amorous old goat and demi-mythical wildman Pan (he of Greek mythology fame), apparently kept a harem of nymphs hidden underground in this easy-on-the-eye Kefalonian cave. It’s certainly a romantic spot, especially at mid-day when the sun blazes through the roof, illuminating its twinkly azure waters. The cave is named for one luckless nymph in particular, Melissanthe, who, the story goes, drowned herself in a fit of jealously. Pay respectful homage on a boat ride from nearby Karavomilos, or just park nearby and gingerly peer in. 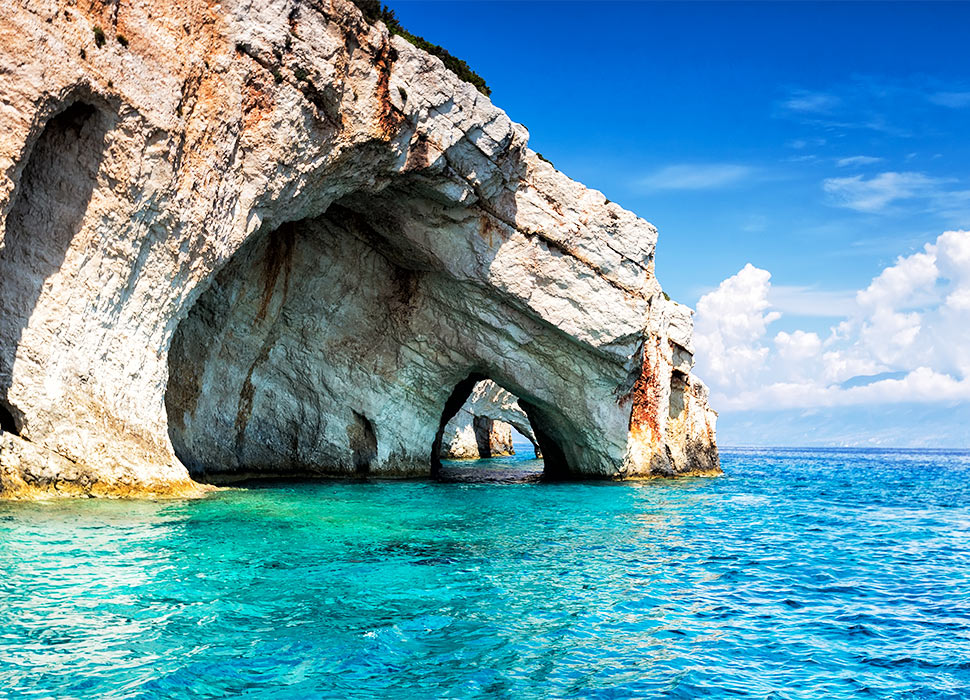 You’ve never truly experienced the colour blue until you’ve sampled a morning cruise up the western fringes of Zante. There – strung along the coast between Agios Nikolaos and the Skinari Cape – a elegant row of limestone arches and semi-enclosed chambers play a neat trick of the light to project the most intense cerulean hue found anywhere on earth. The biggest cave is called Kianon, like cyan (see what they did there?). Trust us – you won’t need filters for this one. 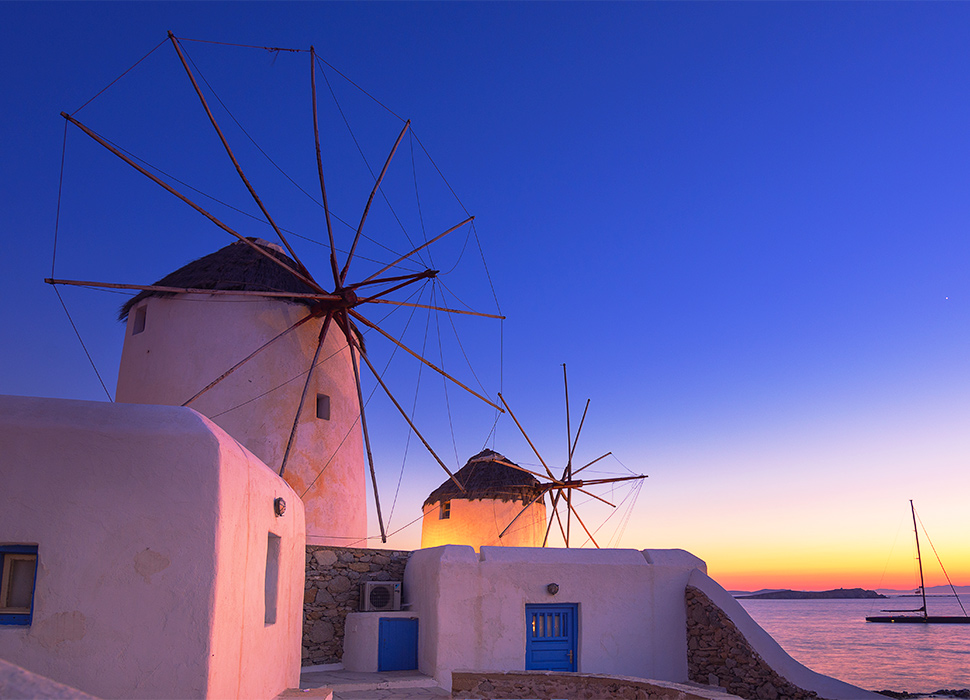 The windmills of Mykonos will really spin your propellor / Image: Adobe Stock

Enterprising Venetian settlers built the first windmills on Mykonos back in the 16th century. While none of them are still technically working – round here, it seems, folks don’t much care for the daily grind – they do make for a ravishing photo op. For best results capture the cluster of five in the Alefkandra Quarter of Mykonos Town. If you insist on being a keen bean, a solo example – named Boni – is just up from the harbour and hosts a nice little museum crammed full of head-turning facts. 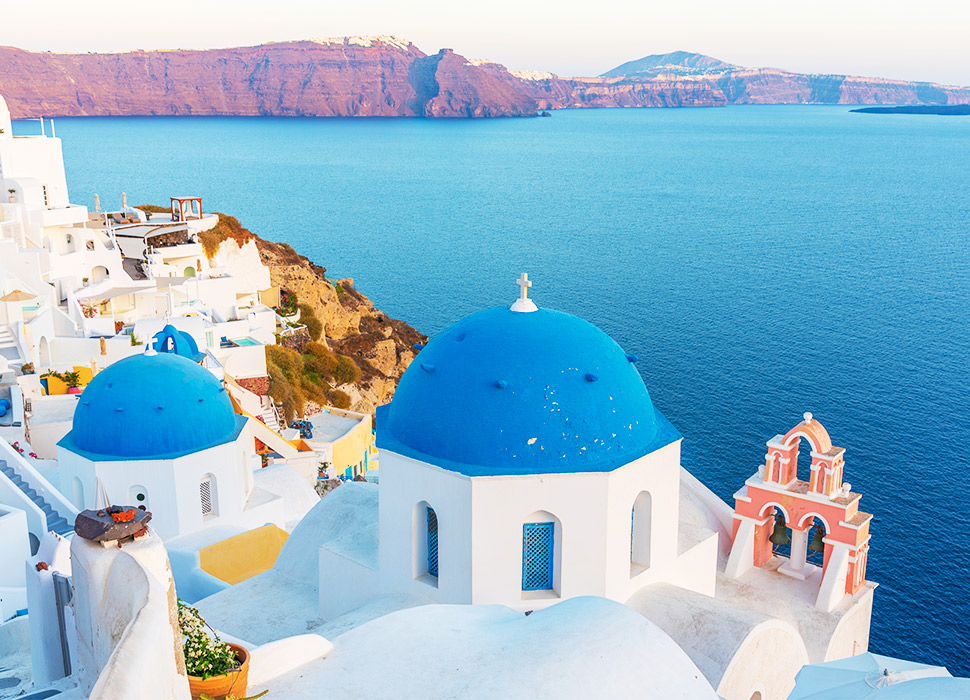 The quintessential Santorini church looks popping-fresh despite being built way back in 1865 – all brilliant bleached white walls, capped off with a pair of hemispherical blue domes. Perched on the rim of the island’s famous volcanic caldera, the dream photo op here is the church with a backdrop of the hazy Aegean Sea hundreds of metres below. The interior is rich and ornate, if you can make it in – this is a busy place of worship, so don’t be surprised to see a lucky bride emerging into the sunshine. It’s all a wee bit divine. 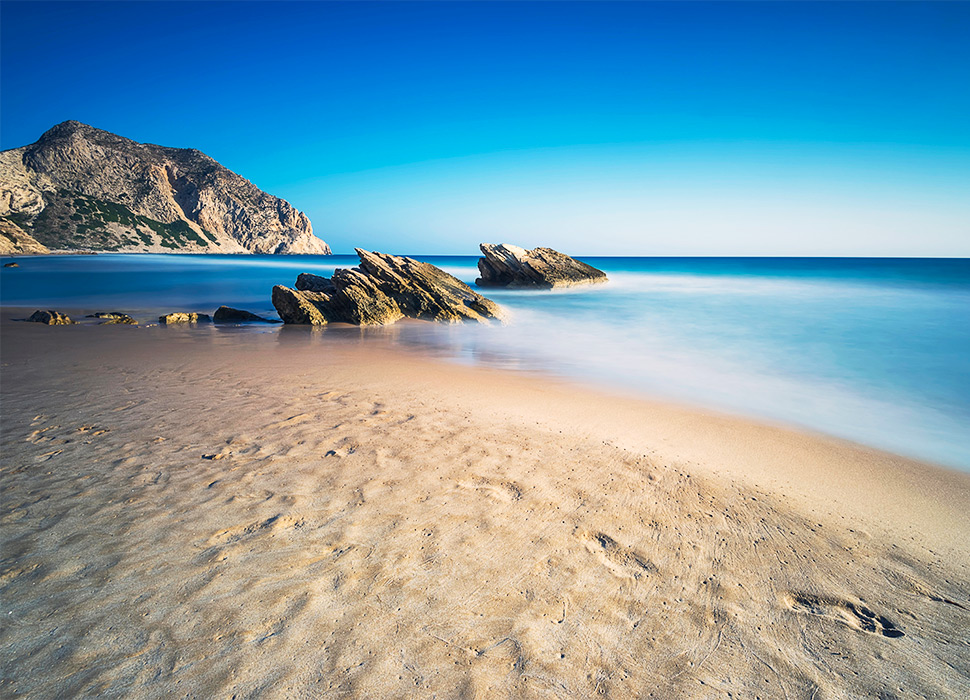 The clue's in the name at this heavenly bay / Image: Alamy

There’s no getting around the fact the most beautiful beach on Kos – and that’s against stiff competition – is a somewhat of a mission to get to. But that’s half the fun. Bag yourself a forgiving set of wheels – 4x4 recommended, really – and take on the steep, bumpy dirt track down from the town of Kefalos. After 40 minutes or so your reward will be a pristine arc of sand, served by a modest bar with its own lovingly maintained sun loungers. Soft sand, shallow seas and photogenic rock formations – drink it in, you earned this. 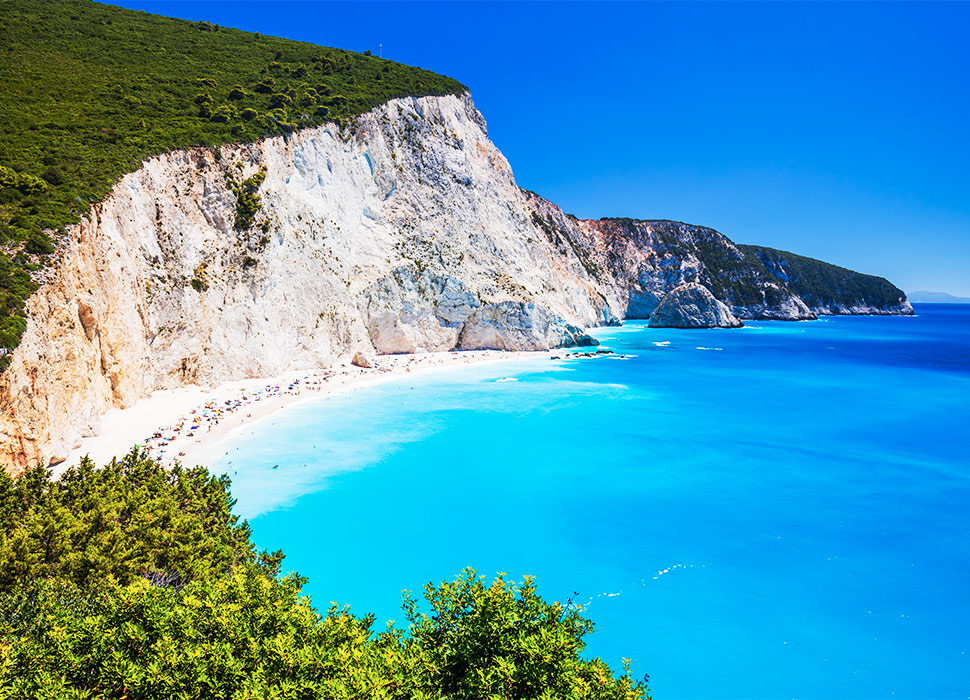 Before Lefkada’s modern road network was properly established in the 1990s, this idyllic hideaway beach lived up to its Greek name – ‘the goat port’ – because only those climbing quadrupeds could access it. Nowadays there’s ample parking – but it’s still a good idea to show up early – and a manageable, if precarious, staircase down to the beach. When you make it down, Katsiki beach is a dreamy crescent of soft pebbles overhung by soaring cliffside, tickled at the fringes by the shallow turquoise sea. Just get the angle right, and your snaps will be the GOAT (greatest of all time). 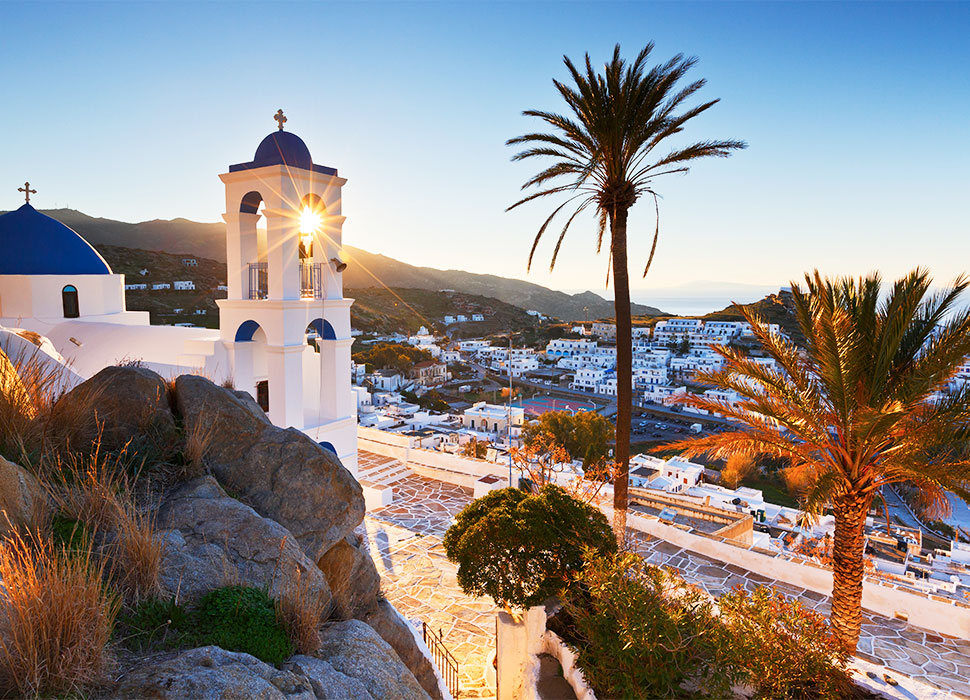 Just try and take a duff snap, we challenge you / Image: Adobe Stock

Honestly, you’d have your work cut out taking a bad photo of Chora, the pre-eminent village on Ios. It’s the absolute platonic ideal of a Cycladic island settlement – all sugarcube homes, daubed in blinding white lime with sea-blue trim, cascading down a steep hillside. Get lost in its twisty stairways and narrow back alleys, or make the ascent to the ruined Venetian castle that oversees the town. You’re on the west coast, too, so an oil-painting sunset is all but assured. 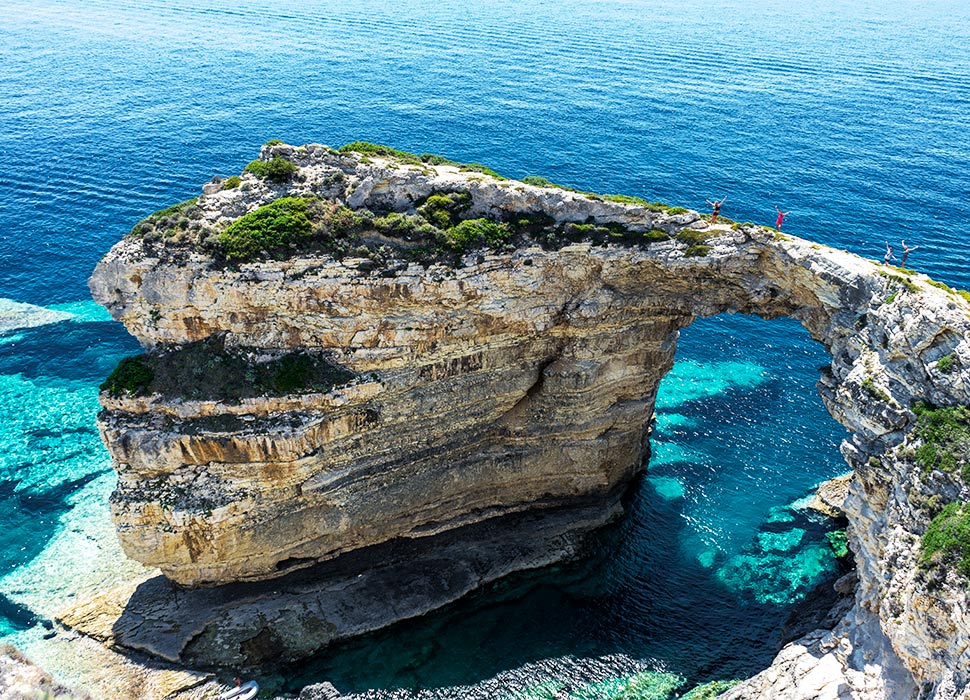 For the ultimate rocking photo opportunity, park up in the sleepy Paxos village of Ozias and make your way down the 15-minute white-stone trail to the sea. There you’ll behold a gigantic arch, soaring 20 metres above the clear blue waters. Apparently it’s all that remains of a once mighty sea cave. The arch is crossable on foot and leaves other similar rock formations – its arch rivals, if you will – in the shade. 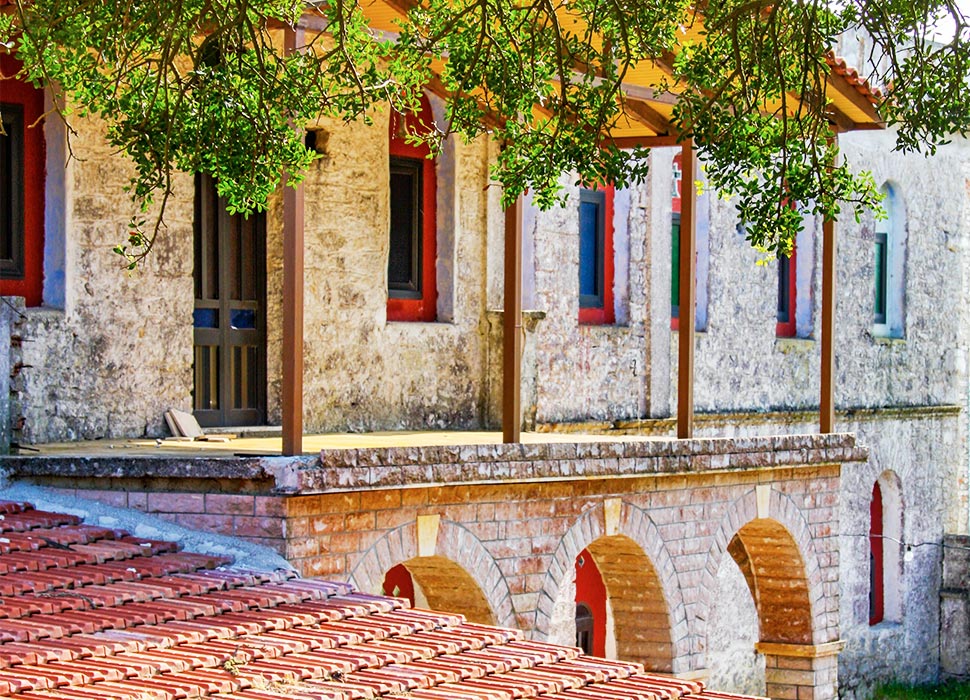 At just over 550 metres above sea level in the hilly centre of Ithaca, this serene hub has been the heart of religious and spiritual life on the island for four centuries. Once you’re done snapping the natty stone with red-trim exterior, pay modest homage to the centrepiece – a model of the Virgin Mary that locals say was hand-painted by Saint Luke himself, and has served as a benevolent protector and symbol of the island through numerous natural disasters and revolutions down the years. Talk about iconic.