"We didn't have money for paint": the pioneering Athens street artist Cacao Rocks

Despite – or maybe because of – the financial crisis, street art is everywhere in the capital. We ask graffiti guru Cacao Rocks why the Greeks love a bit of grafitti

The back streets of Monastiraki, Athens’ street-art hub, are a lot to take in. There’s art everywhere – on crumbling walls, wonky lampposts and shuttered businesses. Colours pop. Paint drips. Messages ranging from the inane to the profane leap out at you. It’s a mind-bending assault on the senses.

In the middle of it, sketching a lobster on a smashed-up shopfront, is a man in paint-splattered dungarees. “We’re trying to find a new identity for Athens,” says Cacao Rocks, of the art scene that’s flourished here since the financial crisis of 2008. “When you think of Athens and Greece, you think of ancient art. What this country needs is to a find a different identity and create something new.” 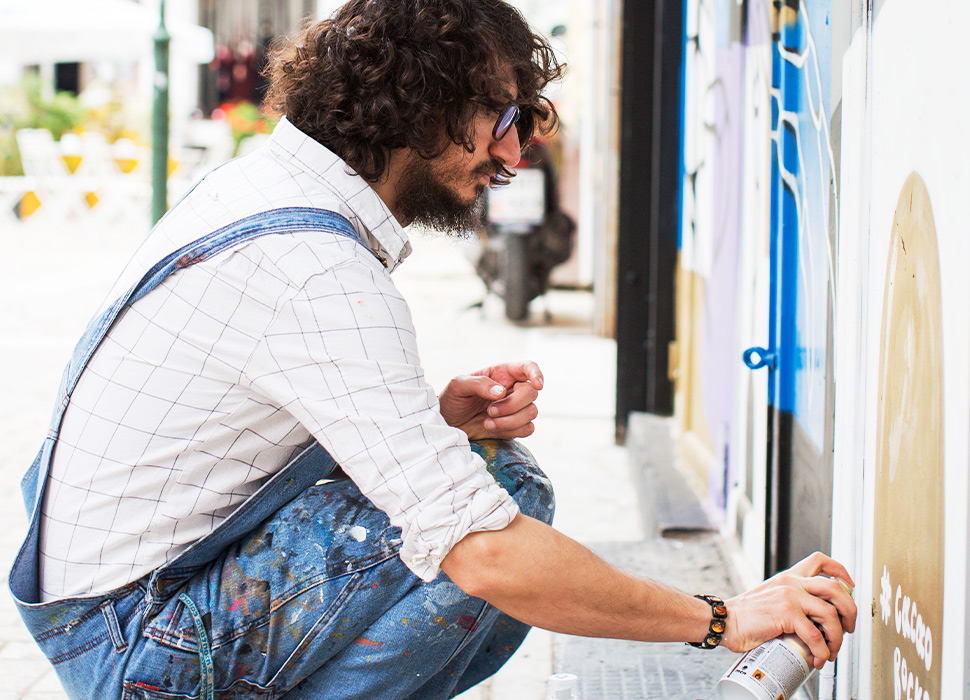 Cacao – he prefers not to use his real name – has been creating art for the past two decades, since he stole his artist father’s paints aged 12, and set about tagging Athens with peace signs and ‘save the planet’ messages. It’s been in the aftermath of Greece’s economic crash that his witty slogans and abstract designs have really taken over the city, however. Now you can spot his ‘Cacao Rocks’ tag in the shadow of the Acropolis in touristy Plaka or on the hipster-lined streets of up-and-coming Exarchia, and here in edgy, vibrant Monastiraki. 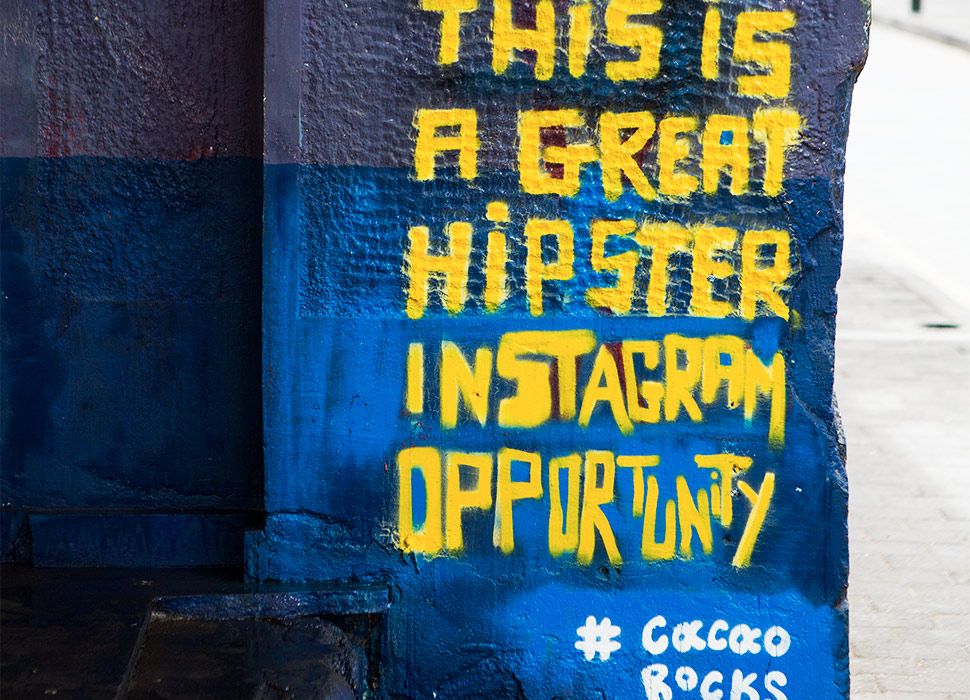 “The last time I tagged as Cacao Rocks was probably about three years ago,” he says. The fact is, everyone here can spot a Cacao Rocks a mile away. The same goes for the man himself. “He is the best artist!” shouts a local sipping coffee in our vicinity.

I suggest he might not have such a fan club had it not been for the slowdown that left so many canvases – old warehouses, defunct businesses and empty homes – for him and his peers to work on. “The crisis didn’t help in the sense that we didn’t have any money to even buy spraypaint,” Cacao explains. “But it was the despair we felt – that, ‘Well, what do I do now?’ that encouraged artists here to find more creative ways to survive.” 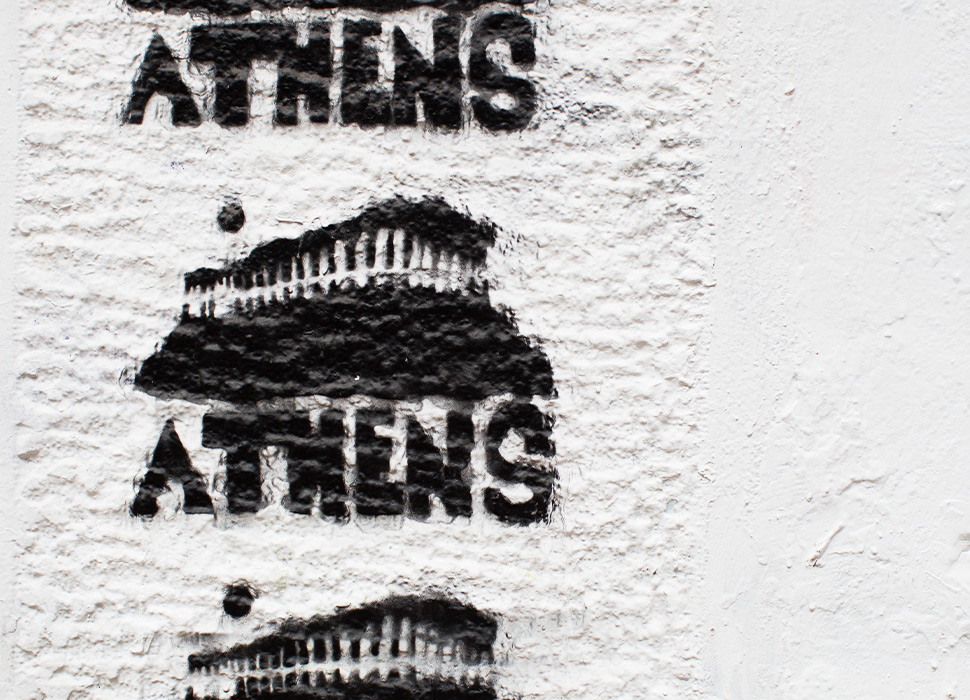 “People don’t respect the law so much,” says Cacao Rocks of Greece

As we chat he leads me to his studio, which is right below Alibi Gallery, the space in which he’s currently exhibiting as part of a major exhibition of street artists’ work from Greece and the USA. His pieces sit alongside those of pioneers such as Shepard Fairey, a genuine American superstar partly responsible for popularising the art form the world over. I ask, at what point does grubby graffiti become laudable street art? “I think it switches to street art when you want people to like it,” he says. 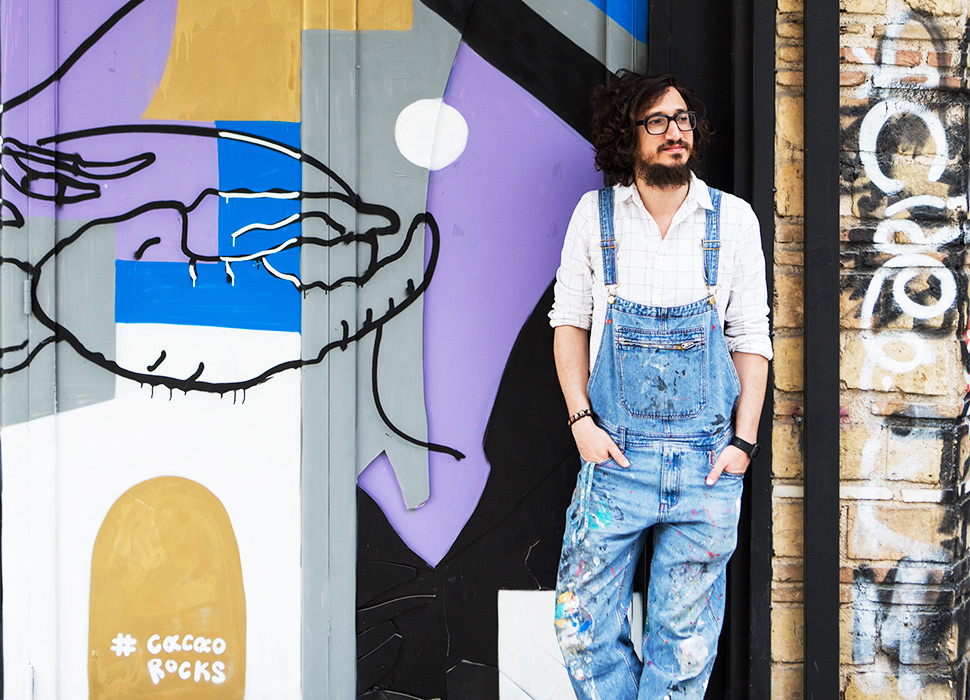 The artist beside his crustacean creation

And people do like it. Good year-round weather and relaxed laws on where you can paint have made Athens a draw for out-of-towners. “People don’t respect the law so much,” Cacao shrugs. “It’s a Greek thing, not a graff thing, but it’s made Athens a graffiti playground. A lot of enthusiasts from around Europe are now coming here on holiday – a kind of graffiti vacation.” 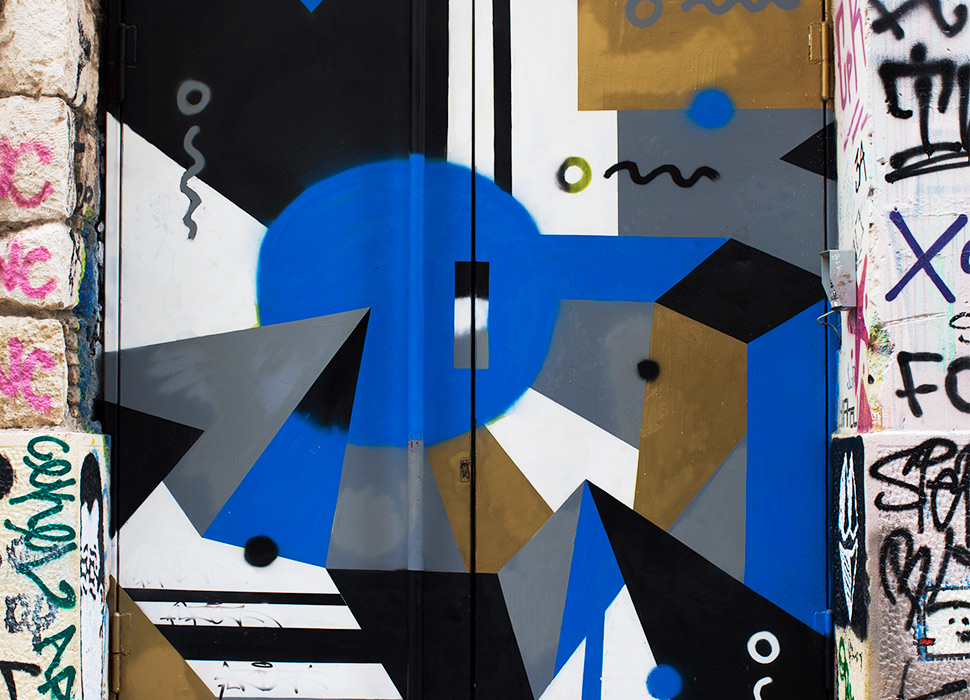 He employs geometry and colour to striking effect

The city’s leaders are now starting to wake up to this fact. Once upon a time the local council would have paid to paint over his work. Now, they’re paying him to create huge murals in public spaces. What’s more, the Onassis Foundation recently hired him to teach school kids the basics of graffiti. “That was weird,” he says, shyly.

Whether he admits it or not, Cacao Rocks is the driving talent in a burgeoning artistic underground that’s bringing the city back to life, and the exhibition at Alibi is showing how far that energy can take you. “The scene represents hope for a Greece that’s struggling,” he says.

To the future of Athens, then. One that’s as bright as its streets.