The best things to do in Munich

From motorcar heaven to serene sculpted gardens, crazy churches and all the Bavarian beer you can sup, Munich is a captivating place. Here's the best of the German city

1. Nibble your way around Viktualienmarkt 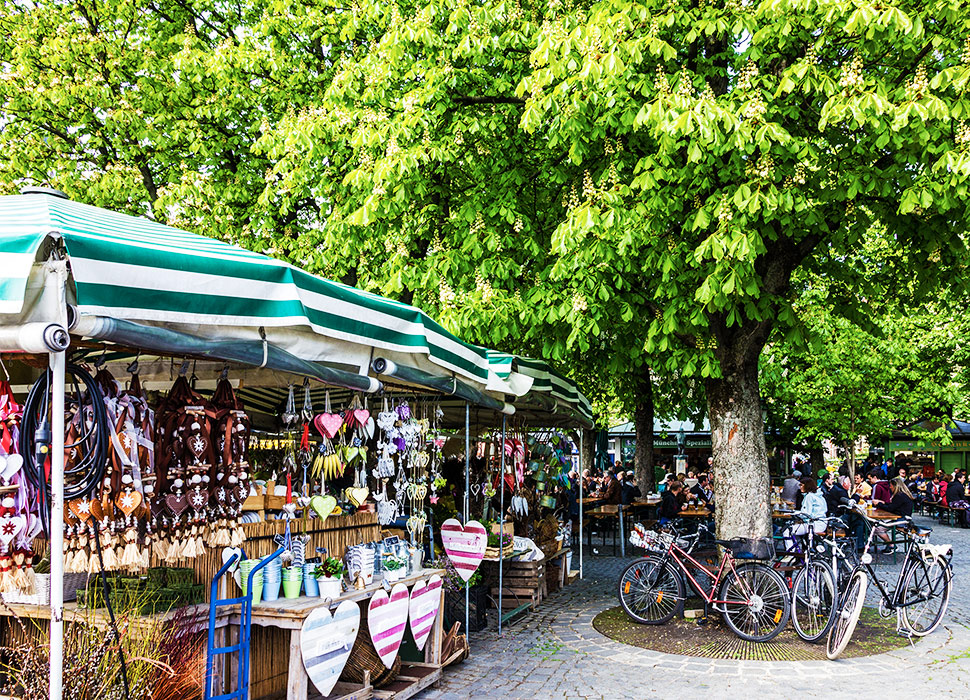 For a true taste of German culture, this 200-year-old marketplace in the city centre is hard to beat. First established by King Maximilian I as a place to trade essentials, it’s grown and expanded over the years to incorporate fountains celebrating giants of German showbiz, and its rustic, villagey vibe is enhanced by the giant traditional maypole in the middle. Wares-wise, it's all about the food, really – from artisan cheeses to posh pickles, fancy meats and, of course, sausages, plus there’s a shady beer garden. 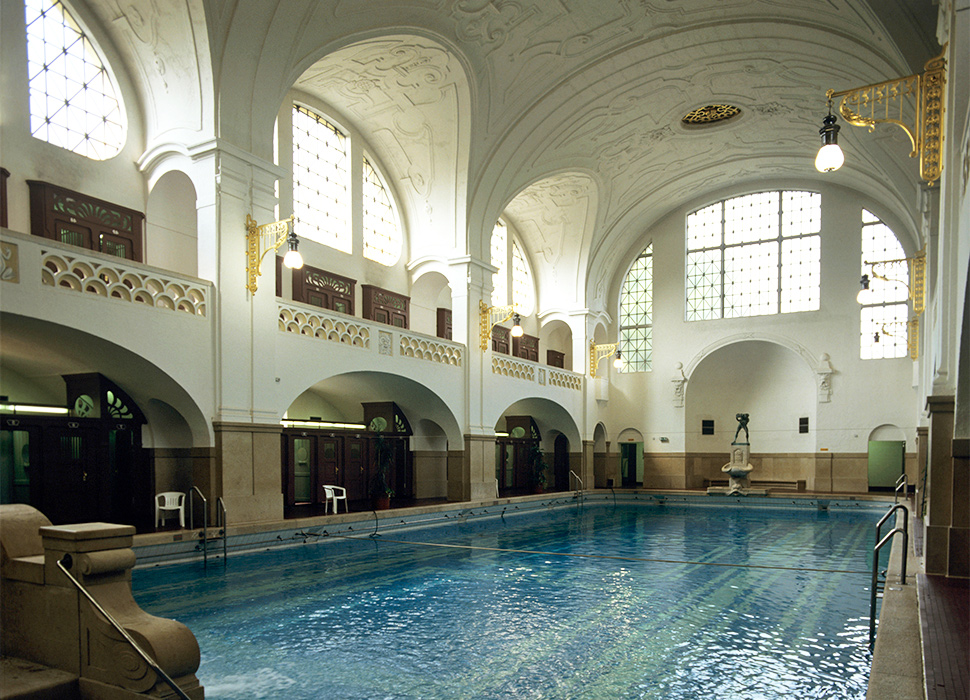 With interiors like this, wetter really is better / Image: Alamy

Not so much a regular swimming pool as a glittering temple – get a load of the lions-mouth fountain – Müllersches Volksbad is a properly regal place to go for a dip. The main 100ft pool, maintained at a civilised 27°C, ripples enticingly under a lovingly restored art nouveau dome, picked out with stylish serpentine mouldings. In the same building is an even more lavish Roman bathhouse, done out with saucy bronze statuary and divine murals, where you can sample the punishing aufguss Finnish sauna every hour, on the hour. It’s so hot right now. 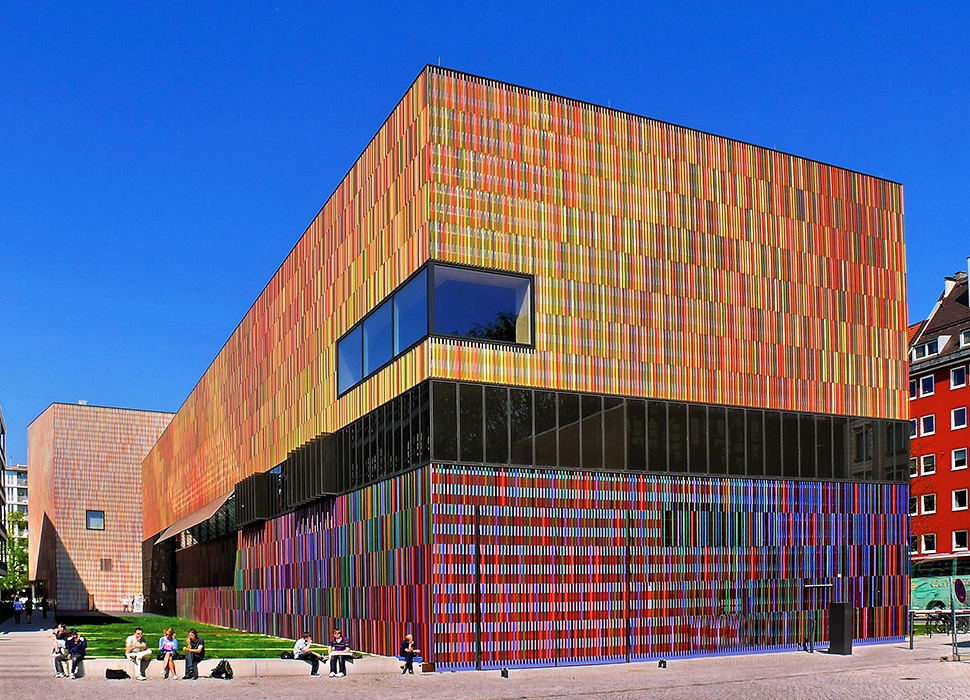 Pity the fool who has to polish that / Image: Werner Boehm/München Tourismus

A relatively new addition to the banging modern art scene in Munich, Brandhorst is worth a visit just for the exterior – 36,000 ceramic rods, finished in 23 different-coloured glazes, cast an iridescent shimmer that looks different every time and from whatever angle you look at it. Inside, marvel at the truly enormous collection of Andy Warhols, alongside modernist bigwigs Joseph Beuys, Gerhard Richter and Bruce Nauman. Special shout-out to the bespoke polygonal room containing Cy Twombly’s epic Lepanto series – an inspired way to enjoy your own brush with greatness.

4. Hang ten on the Eisbach 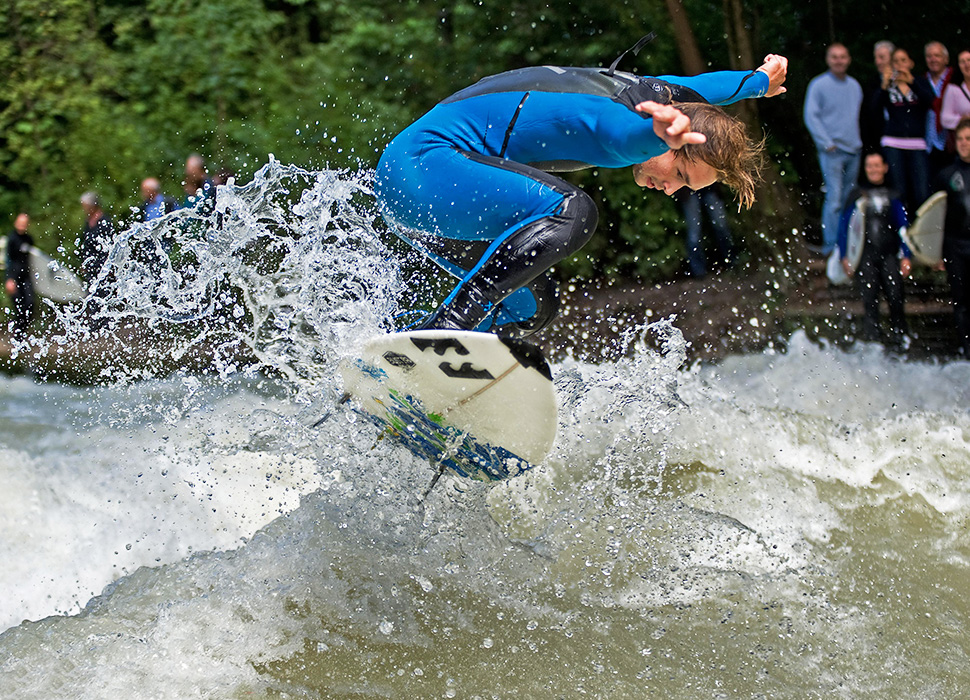 Surfing isn’t something you’d necessarily associate with a landlocked city like Munich. But thanks to an odd quirk of civil engineering – a subaquatic chunk of stone on the bed of the man-made Eisbach river, by the entrance to the Englischer Garten – there are some sick waves popping off right in the heart of downtown. We really can’t emphasise enough that you shouldn’t jump in yourself, but on a hot day watching the local gnarly dudes surf the most consistent inner-city waves on Earth is, like, totally awesome.

5. Confront history at the Munich Documentation Centre for the History of National Socialism 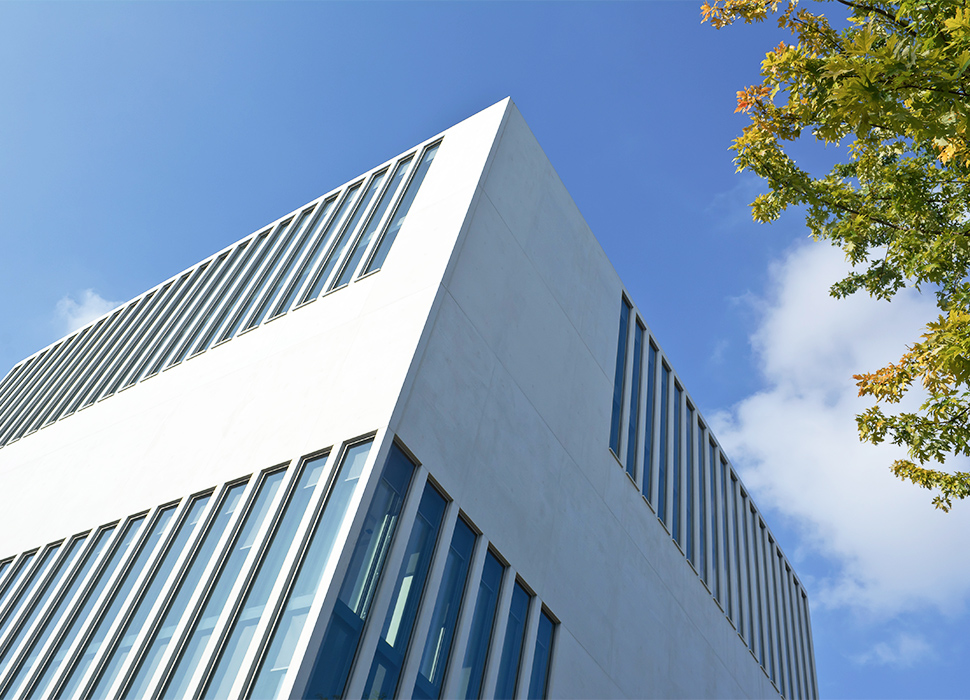 Germany is to be commended for the staunch, unflinching examination of its mid-20th-century history, and nowhere more so than at the Munich Documentation Centre for the History of National Socialism. The city itself was a key backdrop during the rise of Hitler, and this education and remembrance centre – built on the site of the Nazis' ‘Brown House’ headquarters – wants us to look squarely at the mistakes of the past, through film, documents and photographs, and hopefully take home some useful lessons for the future. 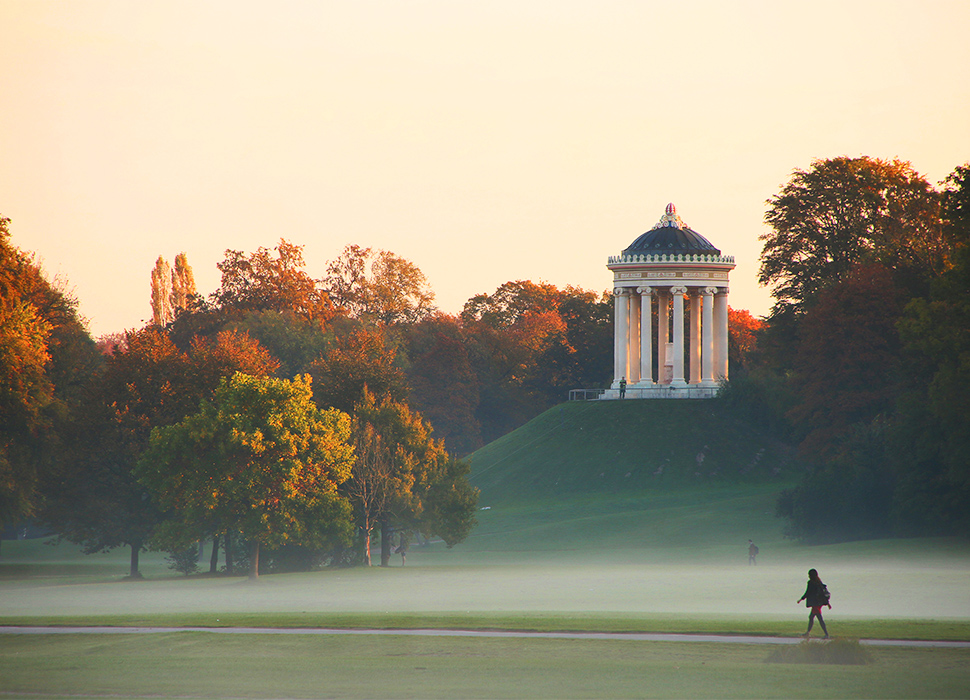 Maybe everyone in Munich assumes all English gardens are as lovely as this one. Nobody tell them any different. A flattering tribute to the rolling, impeccably maintained 18th- and 19th-century gardens associated with Capability Brown and National Trust piles and so on, the Englischer Garten sprawls regally over around 4km2, making it one of the largest urban green spaces in the world. It's beloved by joggers, dog walkers and starry-eyed couples, and there’s also a 7,000-seater beer garden under a handsome Chinese pagoda.

By the River Isar
muenchen.de

7. Celebrate the renegades of Asam Church 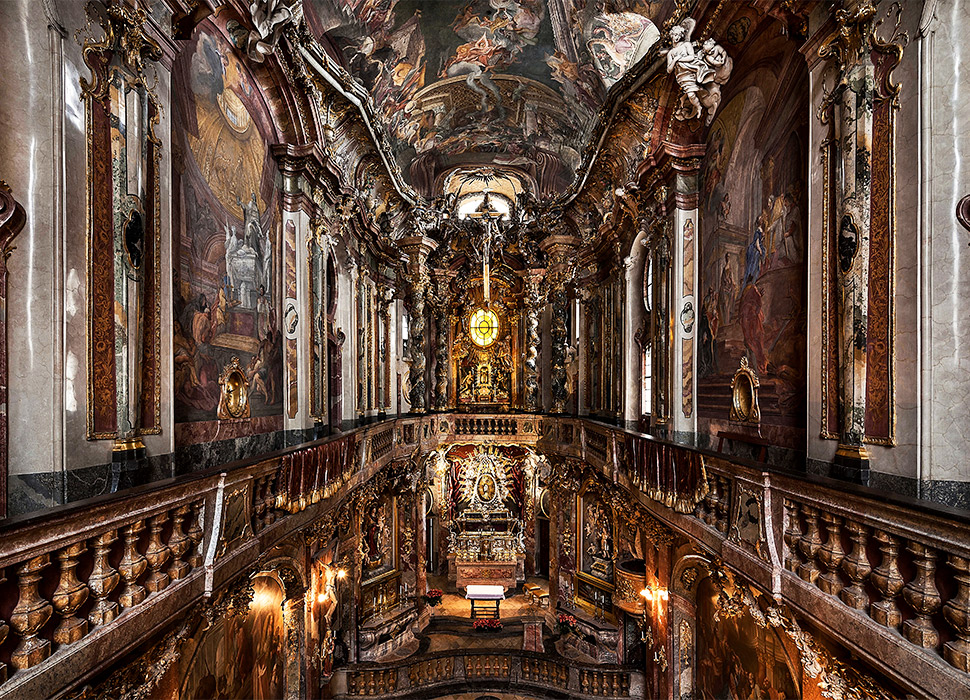 Are rogue church designers even a thing? Here, they are. In the mid-18th century two brothers wanted to build a private chapel. Back then, if you wanted to construct a public church, you needed to satisfy strict guidelines, but as this was just for their personal prayer, they were allowed to be go a bit mad. For example, one brother installed a window in the church wall so he could peer into services from his next-door terraced house. The outside is like a crazy rococo fever dream; the dinky interior – open to the public now – is all gilt and OTT frescoes. It's rather extra.

8. Let your inner petrolhead take the wheel at the BMW museum 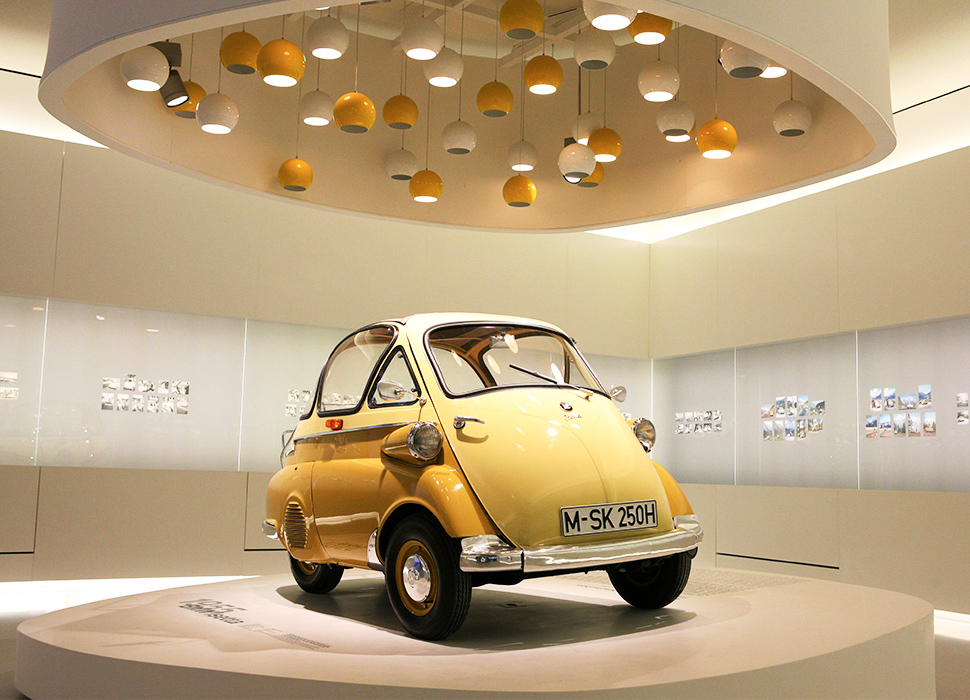 See for yourself why German engineering is so universally loved and respected, in the city where the magic actually happens. The BMW Museum is a glossy tribute to the past, present and future of the iconic marque. Gaze enviously at 125 models, from a restored classic once owned by Elvis Presley to the most cutting-edge futuristic electric concepts. Next door, BMW Welt is a grand, glassy 21st-century vision, also full of cars, symbolising the brand’s core mission – overtaking its rivals at all costs.

9. Strike out in the Giesing district 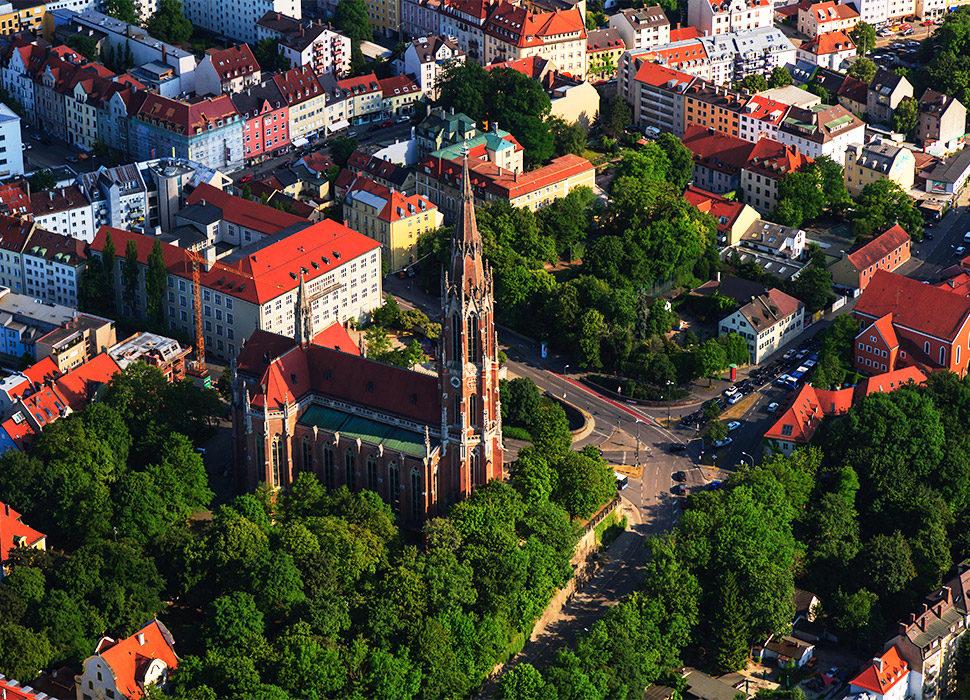 Much-loved local team TSV 1860 Munich play football in Giesing, and on match days the local pubs ring with the hearty sound of good-natured chanting. Very much still on its gentrifying journey, Giesing is a great place to see what real Munich folk get up to when they let their hair down. And there’s hip stuff to be found, like at the Giesinger indie brewery, which has spawned a load of neat little bars and cool start-up restaurants in recent years. It's a district of two halves, but still a net winner.

10. Drink in the history at Stehausschank

Munich is, of course, famous for its traditional beer-drinking scene. For the ultimate anachronistic supping experience, swing by the city’s last surviving Stehausschank, or ‘standing bar’. As the name implies, the landlord has done away with such niceties as ‘food’ or ‘chairs’, and everyone just rubs along happily necking reasonably priced half-litres of pilsner and putting the world to rights. They’re so trad, by the way, that the hooch is served from oaken barrels, and cash is preferred. There were once loads of places like this – come here to experience a local institution that could use a leg-up.