WE'RE SURVEYING EUROPE'S CITIES AND EXPLORING THE COOLEST, MOST-UP-AND-COMING NEIGHBOURHOODS ACROSS THE WHOLE EASYJET NETWORK. THIS MONTH, IT'S OUR GUIDE TO Berlin's multi-cultural ground-zero, Neukölln

There’s lots to love about Berlin – the walkable urban sprawl, the lush green spaces, the rich history, and the excess of bars and restaurants. While luxury condos and faceless new builds crowd some of the city’s other districts, Neukölln still stands as a multi-cultural mixing pot that captures the city’s charm at its best.

The neighbourhood’s appeal borrows heavily from its social history. Neukölln has long been home to generation after generation of families in diaspora, each leaving their mark on the southeastern corner of the city. The district is also popular among more recent expats and immigrants, and a smattering of businesses cater to the newer Neukölln dwellers. Stroll down its streets and you’ll see CBD shops and third-wave coffee joints sandwiched between Lebanese supermarkets and Turkish grill houses. Read on for our insider's guide to Berlin's most engaging enclave.

Or just delve into the best things to do in Berlin generally. 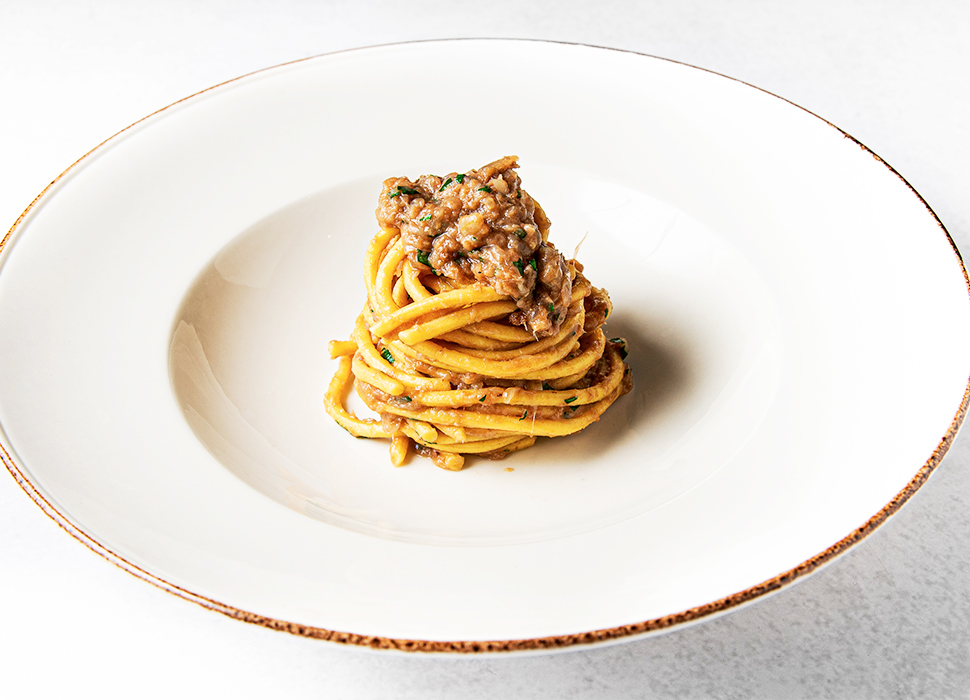 Excellent eateries are in no short supply in this partof Berlin. The neighbourhood’s most popular spots celebrate Neukölln’s legacy as a community hub for diasporic Turkish and Arab communities. The Lebanese snacks at Azzam are a tried-and-true favourite among locals and visitors alike, with creamy hummus, fresh falafel, and plenty of grilled meat platters. Around the corner, you can find some of the city’s best manti (a filled Turkish dumpling) at Gözleme.

Neukölln is bustling with crowds, so if you want to steal a quiet moment for a date, head to La Pecora Nera for fresh pasta with a duck ragú. If you want to make an occasion out of it, make a beeline for Barra: this Michelin-star menu favours local ingredients and seasonal produce for a meal to remember. 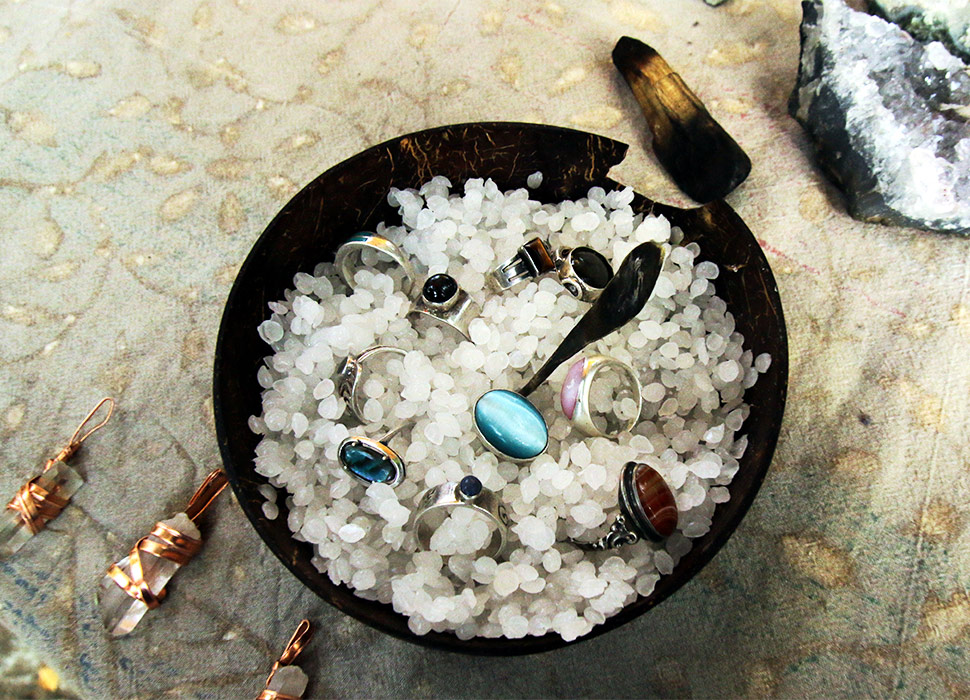 Berlin’s not known for its fashion, but there are still plenty of opportunities for window shopping. If you’re looking for new ideas, or just your next book, swing by She Said for a tasteful selection of books by feminist and queer authors in both English and German.

The Turkish market on Maybachufer is hard to miss. On Tuesdays and Fridays, merchants take to the streets to sell fresh produce, cheese, handicrafts and snacks from their stalls along the river banks. It’s a popular spot for people of all ages to grab a bite or have a beer. Spring and summer are open season for Berlin’s more popular flea markets, so check your calendar and drop by the bi-weekly Nowkoelln Flowmarkt to find vintage clothes and accessories for bargain bin prices. 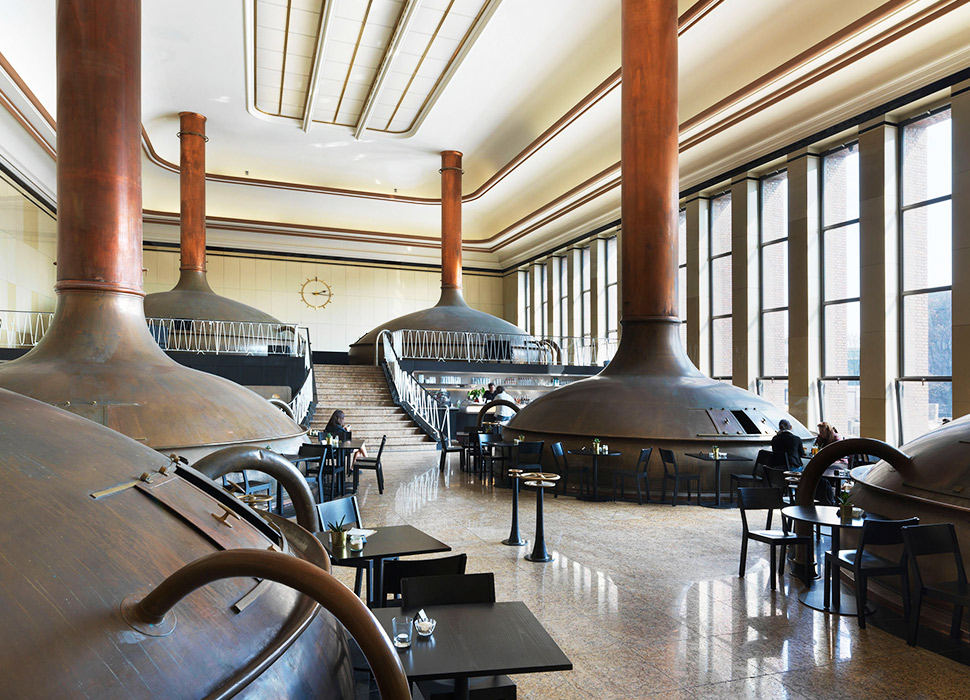 Café Kosmetiksalon Babette in the Sudhaus of the KINDL / Image: Jens Ziehe, Berlin, 2018

Berlin is at its best in the summer, when visitors and locals flood the city’s abundant green spaces. Neukölln is home to a few favorite spots: spend an afternoon lazing in the neo-Baroque oasis of Körnerpark, or head to Hasenheide for a trip to an open-air cinema. If you’re in the mood for a bike ride or a long walk, Tempelhof is the place to be – since 2008, the former airport’s runways and tarmac have been open to the public for picnics, barbecues, or a leisurely stroll in the sun.

Make the most of a rainy day with a visit to KINDL, a contemporary art centre housed in a disused brewery. The vast space is home to eye-catching installations, rotating temporary exhibitions, and occasional performances, as well.

The Estrel Hotel is a popular spot to bed down / Image: Estrel Berlin

The Grand Hostel Berlin Urban is right at the top of Sonnenallee, one of the three major streets that runs through Neukölln. Book a bed in a shared dorm, or hire a private room to yourself to enjoy a view of all the action from a charming Art Deco-style lodge.

For a more reserved visit, stay at the Estrel, a popular hotel and conference center just south of the river. It’s a bit further away from Neukölln’s centre, but a short walk from the Ring Bahn, an overground rail service with great connections to every part of the city. 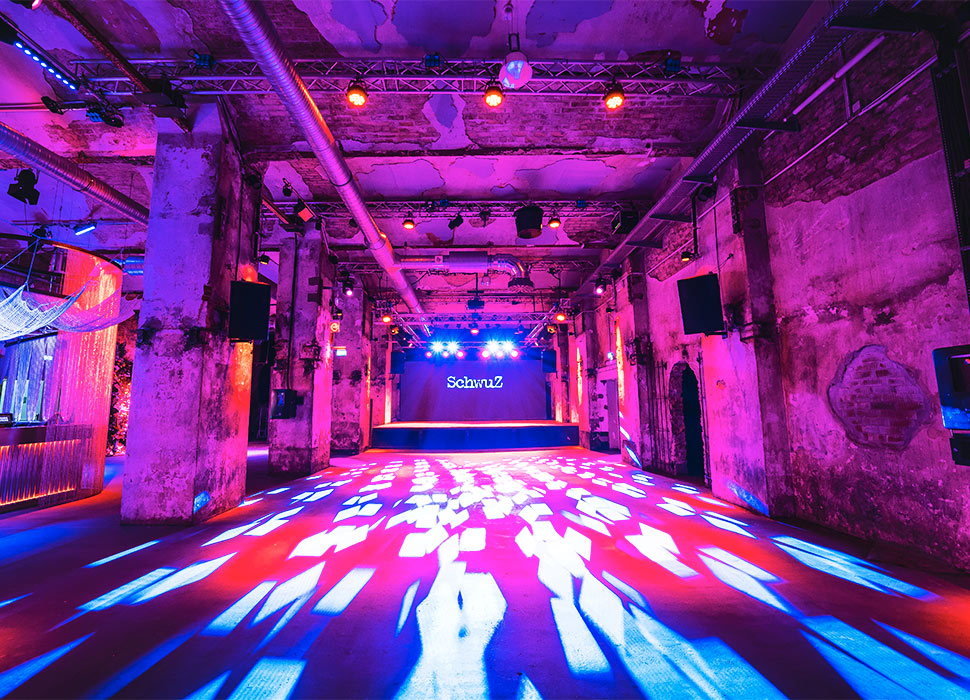 Berlin’s nightlife is second to none, and Neukölln is no exception. For a gentle start, drop by any number of the natural wine bars that have started to spread across the neighbourhood, including JAJA, Motif, and Oona Bar. The latter is a trendy go-to for the neighborhood’s international nightlife connoisseurs – Refuge Radio records and broadcasts live sets from the studio in the backroom.

The party never really stops in Berlin, and many bars and clubs are open 'til the early hours of the morning. While many major clubs are clustered in Friedrichshain, Kreuzberg, and Mitte, Neukölln is home to its own: Loophole is a mainstay for grungey club nights spanning a wide range of genres and crowds, while SchwuZ is one of the city’s most popular gay clubs. 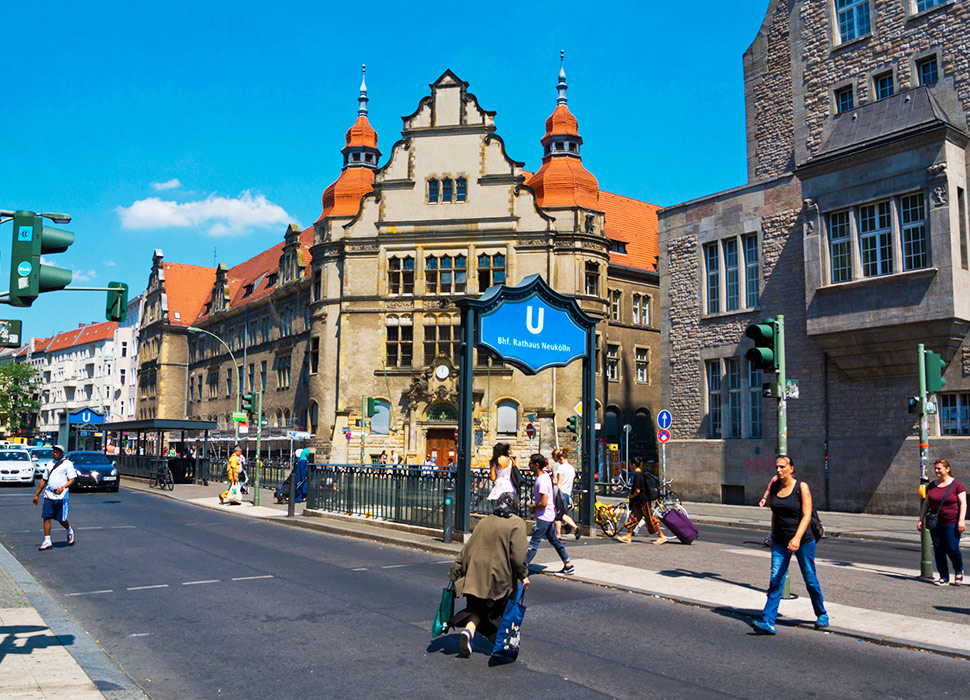 Beers, wine, cocktails? Why not all three? Walk along Weserstrasse for a full range of bars from smokey local pubs to esteemed cocktail bars and wine cellars, or drop in to Lager Lager for a tour of Europe’s best beers on tap.

Dress code? Casual as can be. If you plan on throwing shapes later, be sure to wear comfortable shoes – for the dancefloor, and for the queue.

Friendly locals? Berlin isn’t known for its hospitality, but Neukölln is a favorite among expats and visitors alike, with plenty of bars and restaurants catering to an international clientele.

Claim to fame? While David Bowie spent most of his time in Schöneberg, Neukölln makes a cameo appearance on Heroes as a brooding instrumental track with Brian Eno.