The 7 best currywurst in Berlin

Only a fool would deride Berlin's trademark street food – a cracking wurst, slathered in curried ketchup atop a mound of fries. These are the greatest currywust in the German capital

In 1949 a Berlin cook named Herta Heuwer struck up an unlikely friendship with a British soldier. This soldier, in some manner of barter, provided her with his modest ration of tomato ketchup and curry powder. Clearly a genius, Heuwer combined the two and slathered the resulting sauce over the German grilled bratwurst. The rest is delicious history, and ‘currywurst’ has become arguably Berlin’s most celebrated culinary invention. Here’s a rundown of our sauciest faves.

Need something to wash all that sausage down with? These are the best craft cocktail bars in Berlin.

The German capital is one of the most captivating cities in Europe – and these are the best things to do in it. 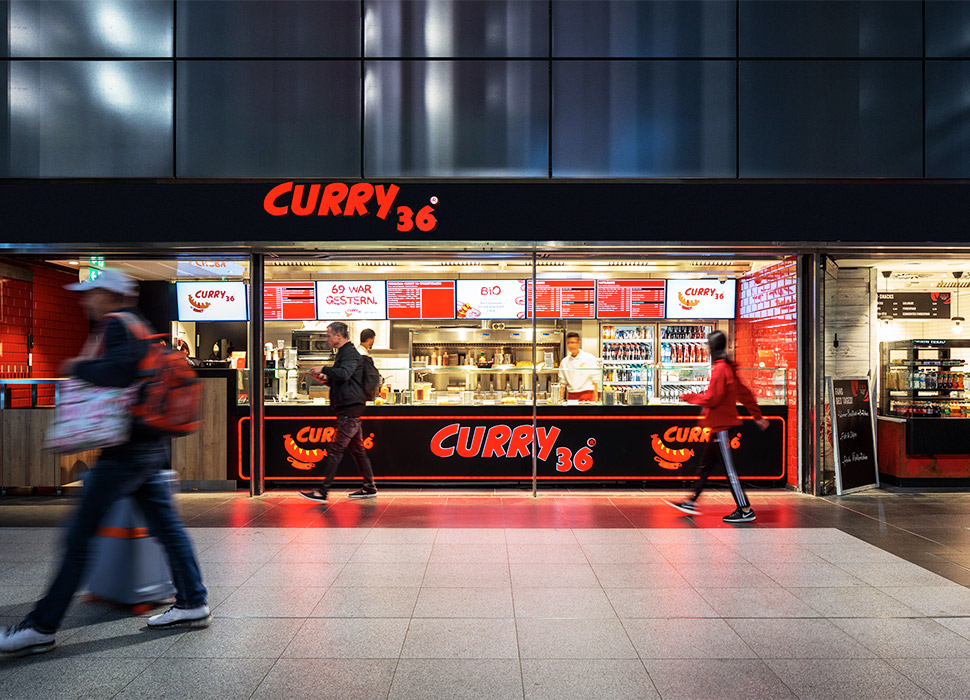 The deal here? Superior sausage meat – those in the know ask for it ‘ohne darm’, meaning ‘without skin’, just so you know – and impeccably gloopy sauce that’s not-too-spicy, not-too-mild. Small wonder Tom Hanks, no less, is said to adore the original Mehringdamm 36 branch of this wildly popular Berlin chain, renowned for its ace fries and, latterly, its canny incorporation of a vegan option and rather respectable craft beer selection. 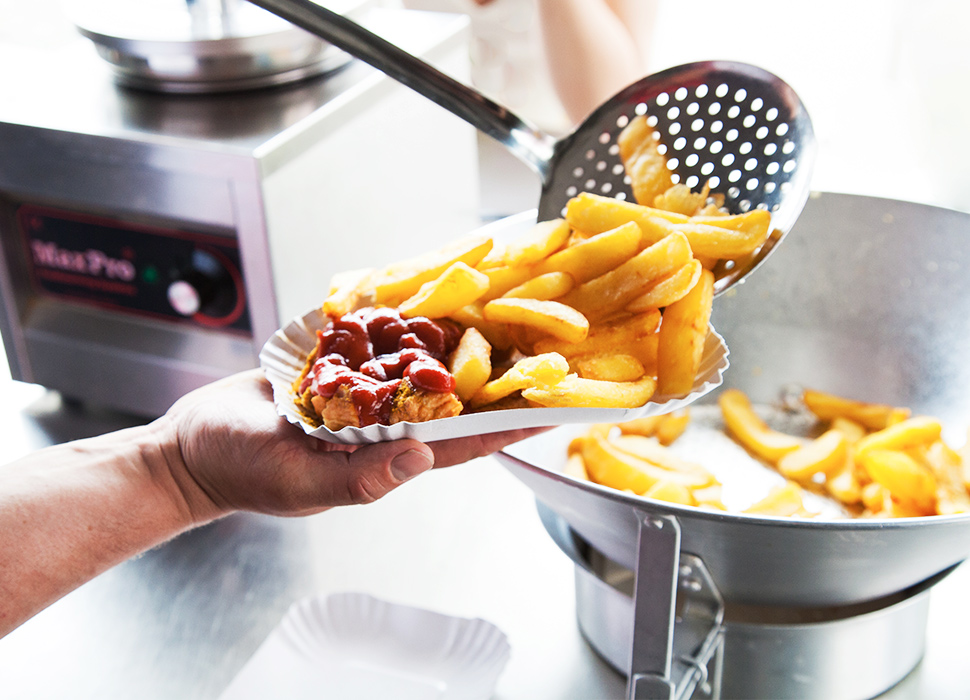 If you’re at all concerned about whether or not your meaty, saucy drunk food is organic, then you’re in luck. Wittys takes sourcing seriously, so alongside it’s goody-two-shoes breakfast porridge option – popular with diet-conscious commuters on the go – the currywurst is not only rigorously selected based on organic principles and welfare standards, but it’s also snappy of skin and delicious. There’s not much room inside, so takeaway is your least wurst option here.

This friendly, chatty spot in a busy shopping area has seating indoors – a relative rarity among currywurst stands – and the novel option of beef sausage instead of the usual pork. You can choose how psychopathically hot you want the sauce to be, and even buy some of Curry Mitte’s own signature seasoning to take home and create your own  carby treat next time you’re half-cut and jonesing for that irresistible wursty goodness.

Curry at the Wall 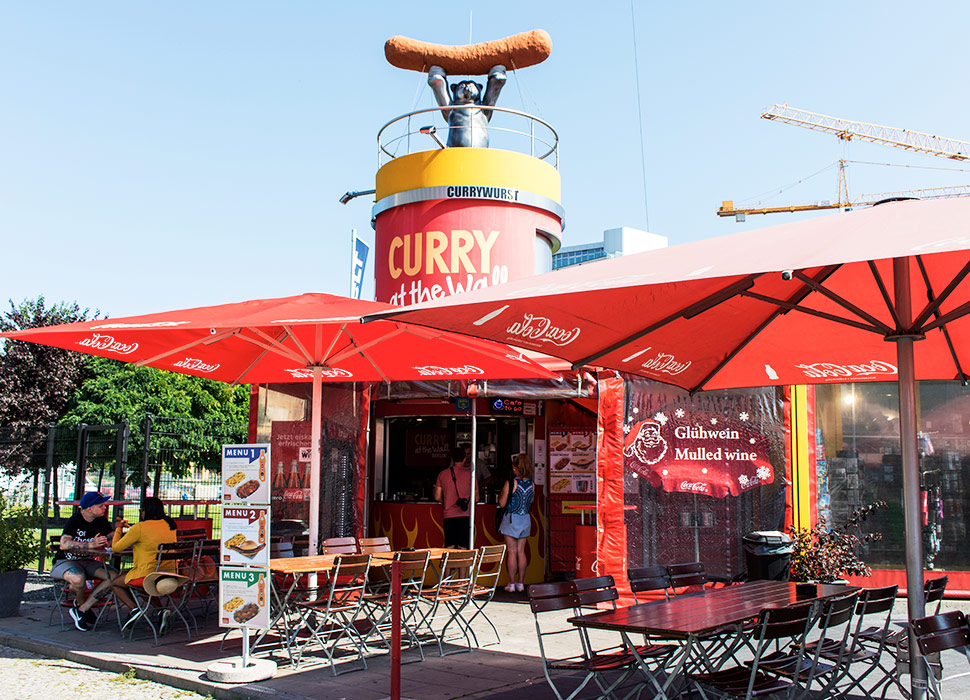 As the name implies, this much-loved vendor is situated a short stroll from Checkpoint Charlie on the Berlin Wall. You can’t miss it – look out for either the giant tethered balloon, or the statue of a triumphant bear holding up an enormous fake wurst. The recipe is classic, but in recent years they’ve wisely introduces a seitan-based vegan option so everybody can enjoy the ultimate cheat meal slathered in garlic sauce and chilli onion.

To be clear, Mischke Fleischerei & Catering is technically more of an upscale butchers, the sort of place you pick up a nice joint of pork or side of beef for a deluxe home roast. Nonetheless, they’re meat stans to their bones, and delight in doling out hot yummy snacks to peckish passers by. Their take on the currywurst incorporates a massive jumbo sausage, impeccably seasoned. There’s no options in terms of hotness, you just have to trust them. 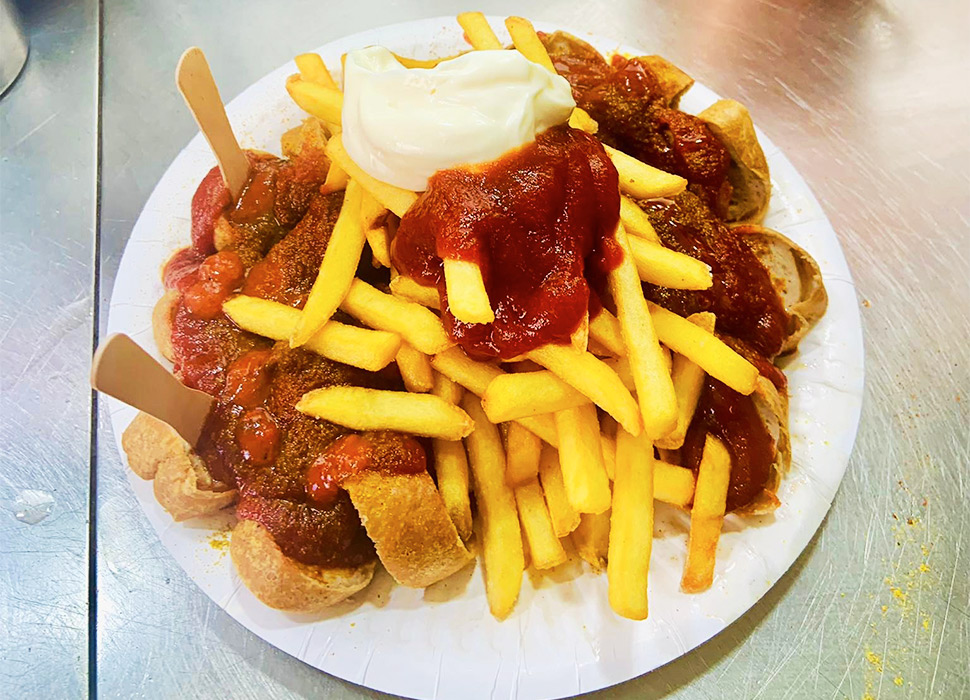 An infernally hot mess of 'wurst

Aficionados of hot food know that spiciness is measured on the ‘Scoville scale’. Well, this unassuming-looking stand boasts 12 – count ‘em – levels of heat, from a modest 11,000 Scoville units up to a frankly eye-watering 7,777,777 units. Even the names of sauces here are spicy – take ‘Fire Blaster’, ‘Jolokia Nightmare’ or the uncompromising ‘Screaming Hot Sauce’. Once you’ve tried all the sauces they award you – or whatever’s left of you – with an actual certificate.

The absolute platonic ideal of an Imbiss – German for ‘burger van’, or ‘snack bar’ – the Steglitz outpost of Bratpfanne, on the corner of Schloßstraße and Kieler Strasse, serves fries and saucy sausages, skin-on or -off according to taste, in humble paper trays. Why so special? Fluffy carbs, delicately yielding and impeccably seasoned meat, and sauce that’s just the right side of sweet. And because it’s an Imbiss, it’s cheap as chips.