The German capital's 24-hour supermarkets are a very local cultural phenomenon. We visit Europe's party capital to discover the heady secrets of the spätkauf

It’s a warm spring evening on central Berlin’s Rosenthaler-Platz intersection. I’m perched on a wonky fold-down bench by the open frontage of Rosenback, sipping a pop-top beer. Hip-hop blares inside. A young couple pour white wine into disposable cups, while two ruddy-faced men chase vodka miniatures with Berliner Pilsners at the table behind them. A staff member hastily re-stocks the fridges, as a perma-queue snakes across the room, almost everyone in it waiting to buy cold bottles of pilsner, helles, weißbier and the like, all at bargain, sub-€2 prices.

As bars go, it’s vibey as they come. Except it’s not a bar at all. Rather, Rosenback is a 24-hour self-service bakery and convenience store – but hardly anyone’s touching the brötchen, ‘bio milch’ or toilet roll as they clink towards the counter. Welcome to the spätkauf, “späti”, or late shop – Berlin institution, cross-cultural melting-pot, and the omnipresent pit-stop of any good night out in Europe’s party capital.

Wine more your thing? Check out this tiny urban vineyard bottling some of Germany best vintages 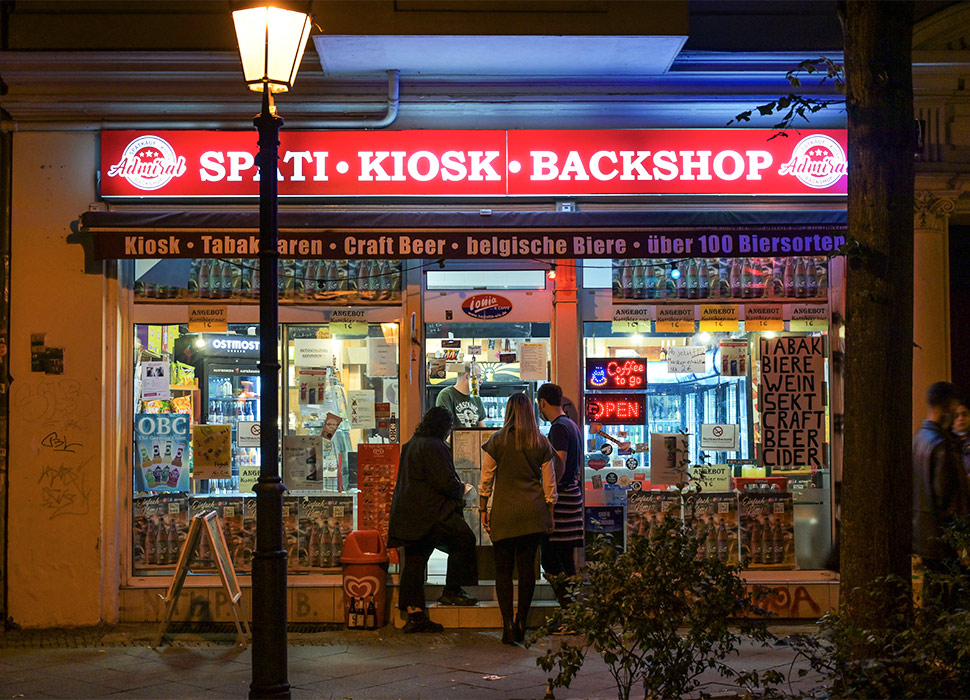 Berlin has one of the most relaxed attitudes to public drinking of any city in the world. It’s legally and socially tolerated almost anywhere, at any time. In some cities, this kind of itinerant street-boozing might be considered a social issue. In Berlin, it’s a quiet cultural phenomenon. In classic German fashion there’s even a word for it: “wegbier”, or “beer to go”.

There are roughly 1,000 spätis in Berlin, most fuelling this thirst for hops on the hop – as well as providing round-the-clock access to other sundries from tobacco to salty snacks. Most blocks are home to one, and occasionally several, recognisable by their slightly forbidding, nondescript names, garish neon signage, packed shelves, and overflowing beer crates. There’s almost always a bottle opener by the counter (often tied down so nobody steals it). There’s often rudimentary seating and tables outside, and on warm nights enterprising spätkaufs can attract big crowds until the small hours. Some don’t close at all. Some even have toilets (knowing which is invaluable intel).

So ingrained are spätis in everyday Berlin life, they’re practically their own subculture – “späti culture” as you may hear it called (or, on Instagram, #spätikultur or #spätilife). In a city where gentrification is sharply on the rise, spätis represent a laid-back, inexpensive, and egalitarian alternative to new-fangled and bougie bar culture. Available to all, all the time – at the start of a night out, stumbling into the post-club dawn or anywhere in between. Even on Sundays, when authorities insist spätis should close in line with supermarkets, and yet many open irrespective. 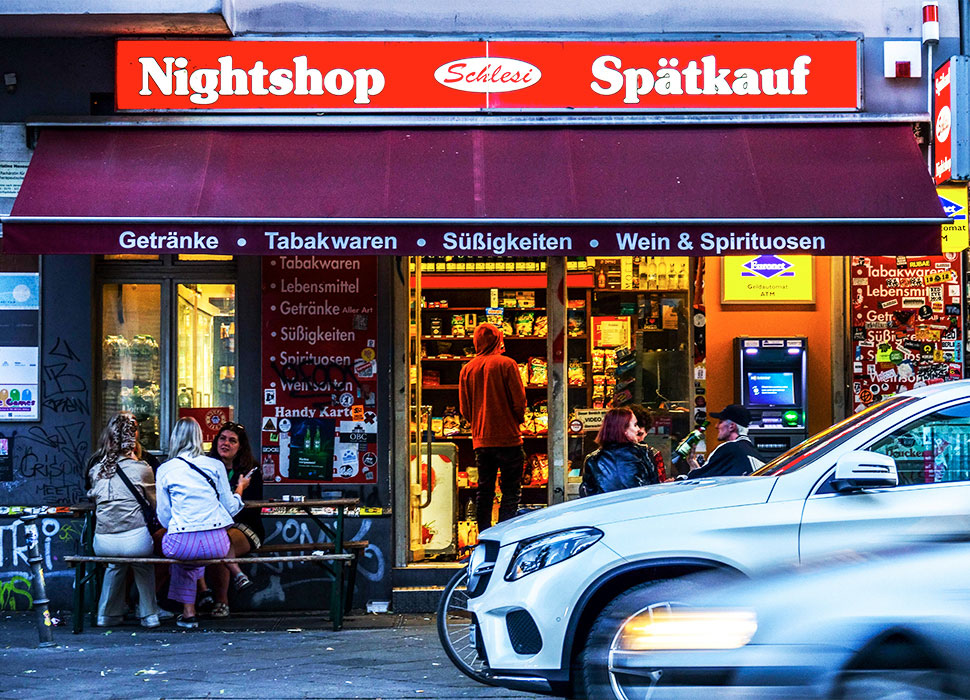 During Berlin’s hard coronavirus lockdown, spätis were designated essential services and allowed to continue trading, albeit under strict limitations. Most struggled, some didn’t survive. In a rapidly gentrifying city, spätis don’t always fit with the programme. One of the oldest and most beautiful spätis in Berlin, the atmospheric GDR-era time capsule at 12 Choriner Straße, was only saved from developers after a collective of residents, businesses, neighbours, and other supporters got together last year to buy the apartment block in which it’s housed. But with the pandemic having made us all further appreciate the benefits of socialising alfresco, spätis might be about to rebound into a bonanza summer.

Späti stores first appeared in communist East Berlin in the 1950s, to accommodate workers coming off late shifts. Numbers in both East and West began to skyrocket after the Wall came down in 1989, driven both by Berlin’s fresh status as a liberal party hub, and the entrepreneurial spirit of the city's growing diasporic communities. According to Berliner Späti e.V., an advocacy group for owners and operators of Berlin spätkaufs, around 90 percent today are owned by people of non-ethnic German descent, mostly Turkish and Middle Eastern.

Berliner Späti e.V. is co-chaired by Sahin Karaterzi, owner of Neukölln späti Kiosk 44. Though Kurdish-Turkish, Karaterzi has lived in Germany for 35 years and owned Kiosk 44, which he runs with his nephew, for six. He works long hours; the profits aren’t great. But he loves being an intrinsic part of Berlin life. “Berlin would not be the same city without spätis,” insists Karaterzi. “Späti culture – this culture – belongs only to Berlin. You can’t find it anywhere else.” 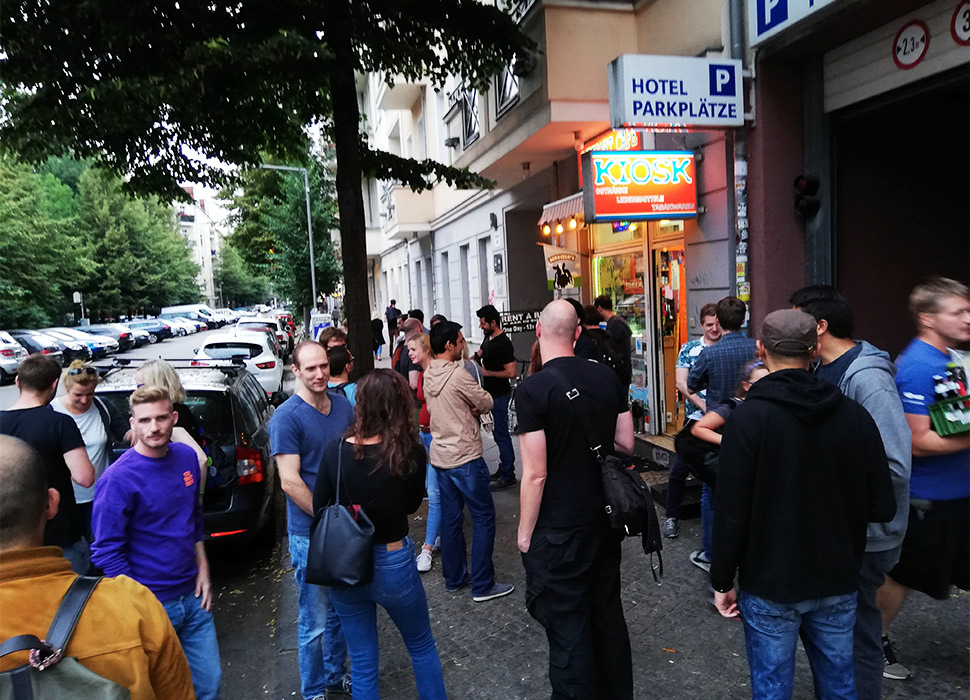 The spät-kurious take to the streets on a 'späti crawl'

Outside Spätkauf Getränkeparadies (“Drink Paradise”) in Friedrichshain, I have a beer with leading späti exponent Pablo Ivan. For 10 years, Ivan has organised the Späti Crawl, a regular group tour of spätis around different parts of Berlin together with both tourists and curious locals.

“Bar crawls, they’re everywhere in major cities, including Berlin,” says Ivan who, having been born in Mexico and grown up in Los Angeles, is as much an emigré as many späti owners. “But when people say, ‘Okay, späti? Drinking cheap beer outside stores?’ They’re interested. It’s a chance for me to explain what spätis are. But primarily, it’s about having a beer with strangers, making new friends.”

Ivan believes the rise of späti culture has been driven in part by the demise of Berlin’s kneipe – cheap neighbourhood pubs that have struggled to appeal to younger generations. “Those are disappearing, unfortunately,” he says. “The spätkauf is becoming the substitute neighbourhood hangout. Spätis are really a gathering for the locals. When I bring people from abroad, they think ‘that’s a nice concept.’” (Some, admittedly, are just into them for the prices. “Why would I drink in a bar when I can drink the same beer from a späti for, like, half the price?” says twentysomething Anabella, on her way out the door at Rosenback to her friends in nearby Weinberg Park. She’s got a point.) 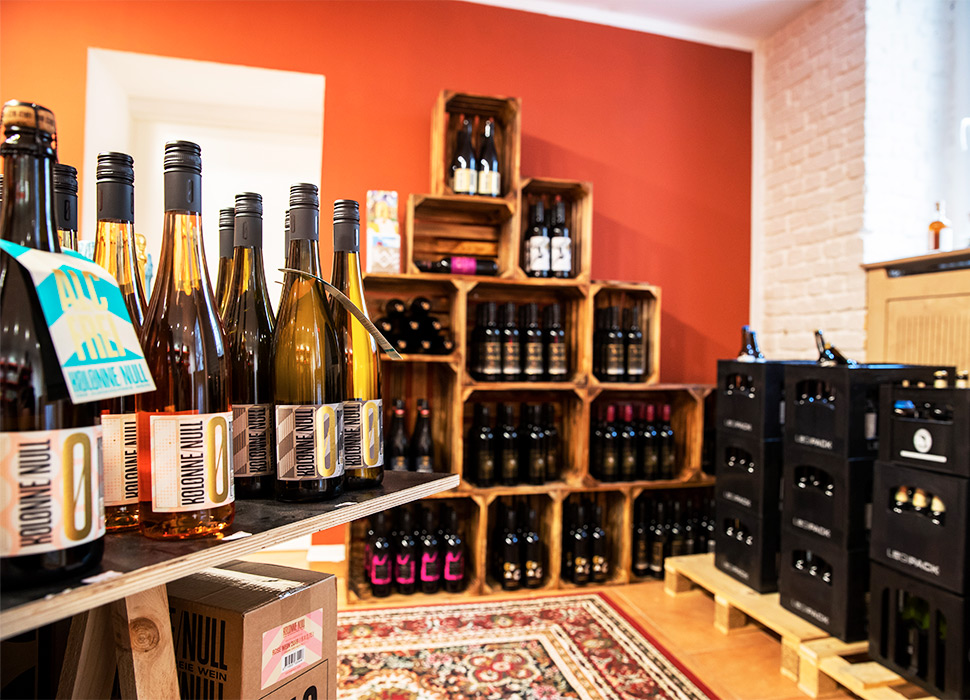 Increasingly, the city is beginning to see inventive, weird, and wonderful spins on the late shop. Drink Drunk in Kreuzberg sells a massive global selection of IPAs, pale ales, porters, and other craft brews – not as popular in pilsner popping Germany as other countries, but increasingly catching on. Not far away, there’s Null Prozent, Berlin’s first alcohol free späti. At the “techno späti” of Spätkauf 178 in Neukölln, beats blast from a powerful sound system and DJs spin tunes behind the counter. Another legendary späti in Mitte, now shut down, had a fully functioning nightclub inside it behind a fake fridge door.

For a gentler and more cerebral späti experience, I drop by the tables outside Brother’s Night Shop on Schönhauser Allee in Prenzlauerberg, for a round of chess with Wolf Bōese, designer, artist, and founder of Stranger Chess – the free-for-all gaming meet up with a spätkauf twist.

A few years back Bōese was partying too hard. As a way of sobering up, and to combat the loneliness of lockdowns, he started taking his chess board into parks and onto pavements to play with strangers. Eventually the staff at Bōese’s local späti let him set up outside their store. He’s been here every night since – rain, snow, or shine – with a growing cohort of regulars and randoms. Busy nights can see up to six boards on the go simultaneously. 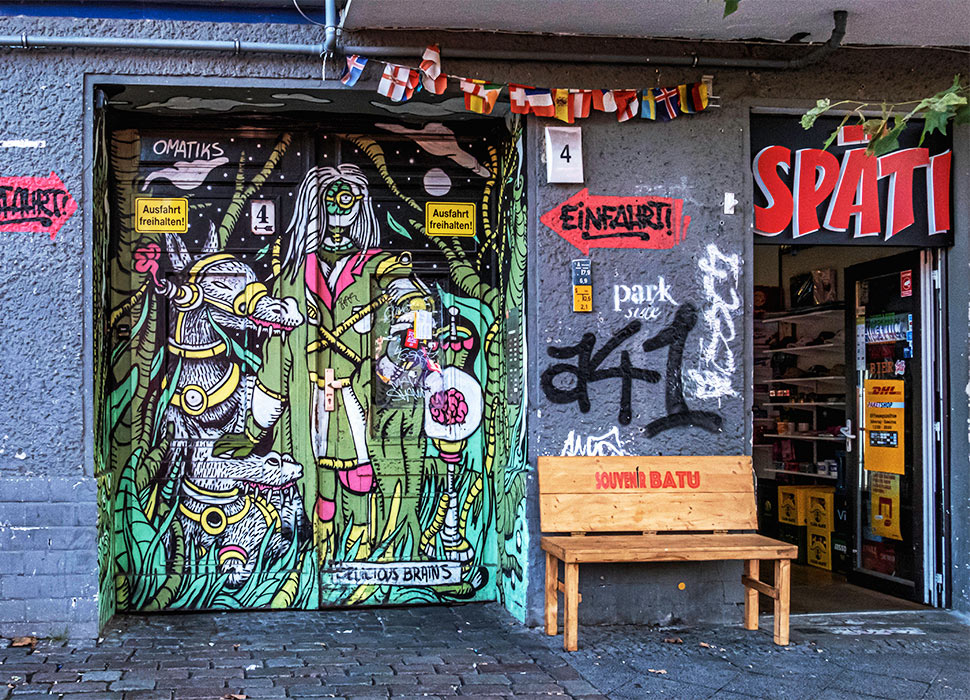 Normally with street chess, Bōese notes, “you don’t have any lighting. You don’t have a toilet. There’s no snacks.” The spätkauf on the other hand is “perfectly set up for it”, he says. Late into the mild Berlin night, passers-by stop to play or just drink and spectate. Anyone can get involved, so long as they buy something. The guys who run the store don’t say much, but they seem to welcome the business and the way the buzz helps their späti stand out. “I made a joke that they should change the name to Brothers ‘Knight’ Shop – to make it more chessable,” Bōese grins.

The spätkauf is primarily about having a beer with strangers, making new friends

Techno and chess spätis apart, most of Berlin’s ubiquitous late shops look and feel much the same. Yet scratch the surface and you’ll find that each is somehow different. A reflection of the people who run them, the communities they serve, and the unlikely mixture of customers who share their wonky benches, from senior citizens to young hipsters, from punks to tech bros. In a rapidly changing city that still prides itself on freedom and individuality, spätis might be one of the most authentic things about Berlin. Another pilsner popped, I drink to that. 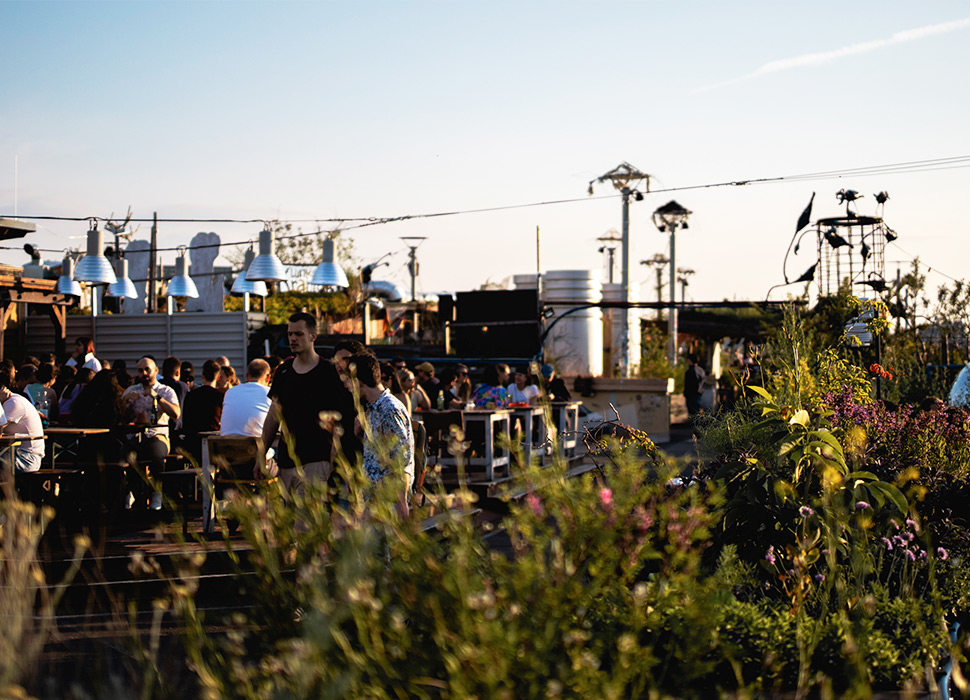 Tempelhof
A Nazi-era airport synonymous with the Berlin Airlift, Tempelhof was returned to the people and is now a huge public park. Bring your own booze and barbecue, or drink at Luftgarten beer garden or summer pop-up Rosinenbar.
Platz der Luftbrücke 5
thf-berlin.de

Prater
Berlin’s oldest (and best) beer garden, Prater is 600-seater down-to-earth drinking oasis in the heart of bustling Prenzlauer Berg. Queue up for a foaming glass of Prater Pils then grab a bench table beneath a canopy of chestnut trees.
Kastanienallee 7-9
pratergarten.de

Klunkerkranich
Berlin’s best spot for sundowners with a view is a laidback rooftop bar-club founded by veterans of the city’s underground techno scene above a shopping mall in Neukölln. Expect live music and DJ sets most nights in summer.
Karl-Marx-Straße 66
klunkerkranich.org