The colour wheel gets rolled out at Hüttenpalast / Credit: Jan Brockhaus

The German capital is full of super-hip boutique boltholes and upscale hostels. These are the best places to stay in one of Europe's coolest cities

The colour wheel gets rolled out at Hüttenpalast / Credit: Jan Brockhaus

Berlin’s hotel scene is much like the city itself: cool, diverse and surprisingly affordable. From designer digs close to the city’s nightlife to barmy “urban glamping” experiences in refurbed caravans, the German capital has it covered. We round up ten of the best.

Prep your itinerary with the best things to do in Berlin. 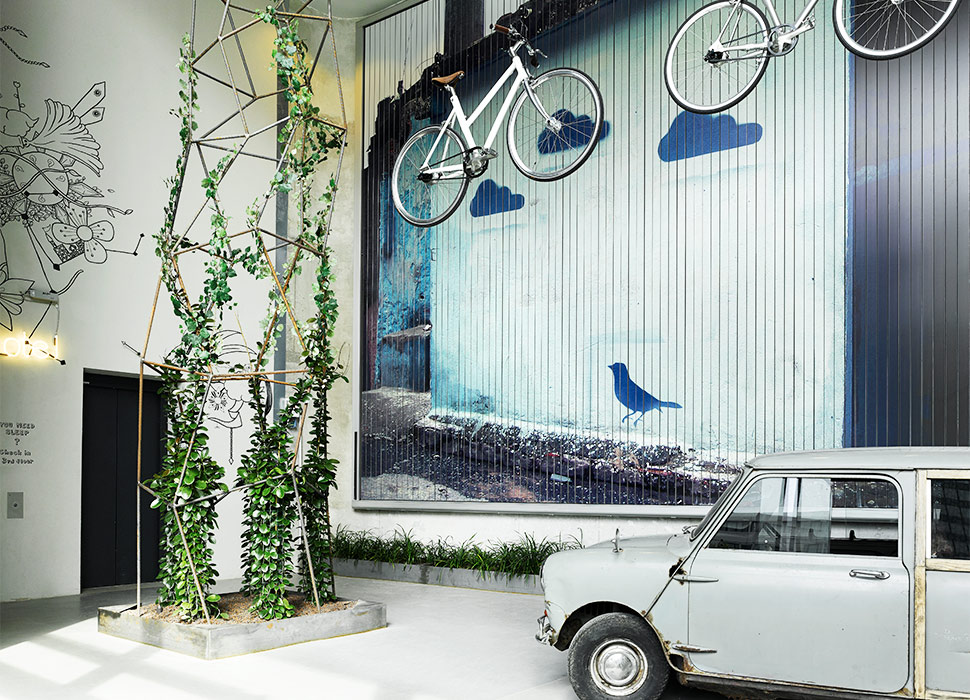 Quirky chic at a hipster staple

One of west Berlin’s coolest hotels is based in a drab-looking 1950s high-rise, but don’t let that put you off. In fact, it’s a big part of the allure: the views over nearby Zoologischer Garten are fabulous. Elsewhere, German designer Werner Aisslinger’s playful interiors are funky but functional and there’s a gorgeous rooftop restaurant, Neni, where a great breakfast is served daily. Equally popular with the capital’s comely in-crowd, Monkey Bar is jammed most weekends (but guests get preference). 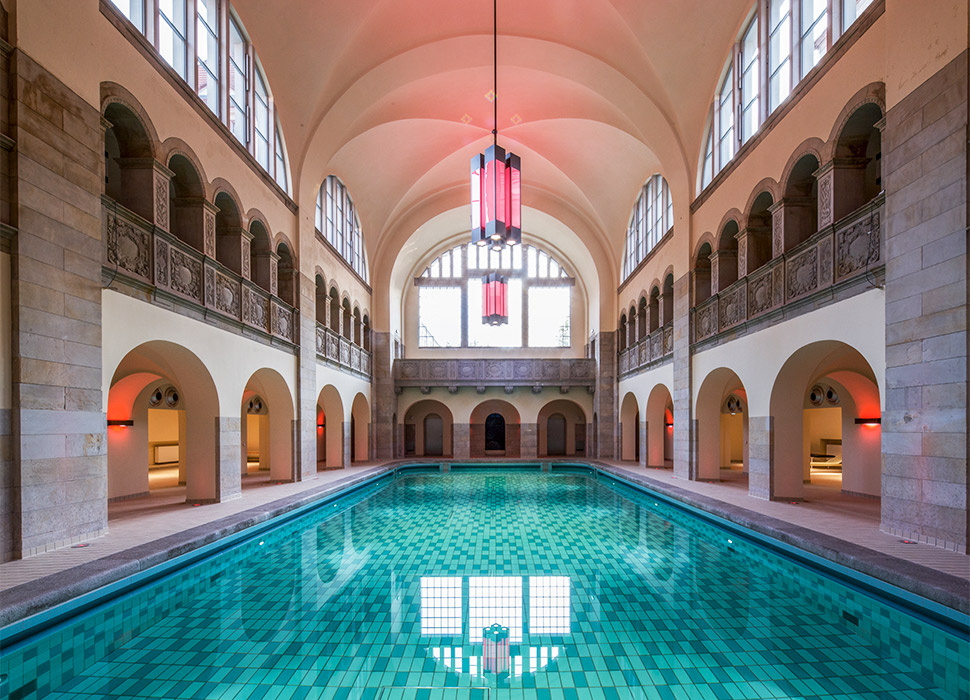 If you’ve seen a pic of this chic stayover in Berlin’s Prenzlauer Berg district, it will likely be of its glorious 20-metre pool and, yes, it is that epic in real life. Warning: it’s open to non-guests but, even so, it’s rarely mobbed (and there’s a spa and sauna, too). Either way, the hotel’s 70 rooms are all white-washed, understated chic; the large, split-level restaurant does a generous, German-accented breakfast; and there’s doubly comfy, log-fired Kaminbar for cocktails come evening. 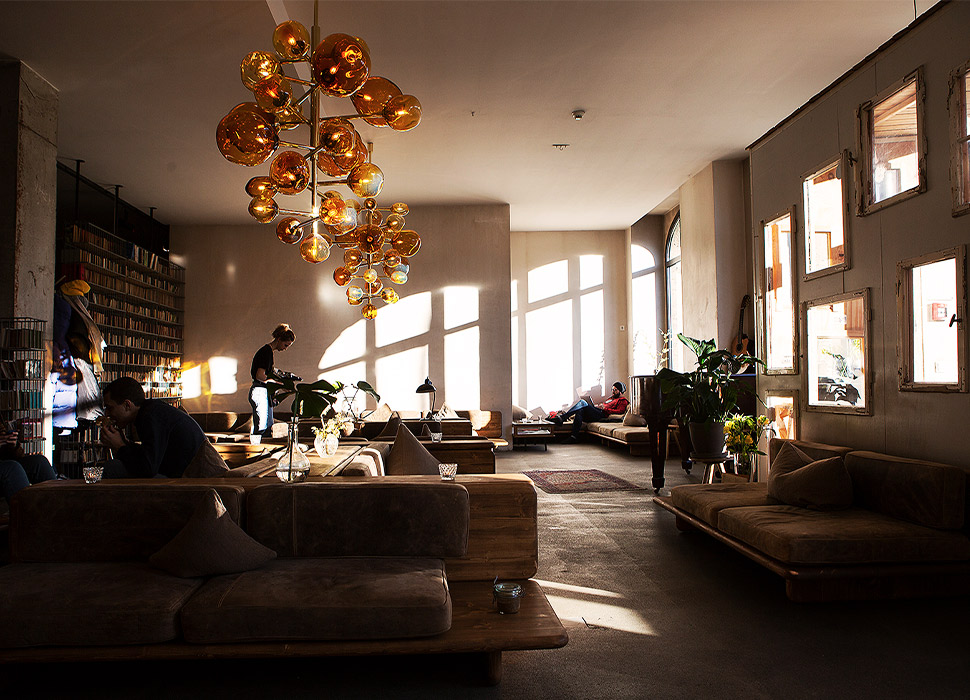 The swooning lobby at Michelberger

A ten-minute walk from Berghain and all the other clubs in the city’s vibey Friedrichshain district, this very chic, Werner Aisslinger-designed hotel has a creative-cool vibe but, even so, the tuned-in service is friendly and attentive. Just about everything looks gorgeous here: all 119 rooms, the beautiful library, the deservedly popular restaurant (easily the neighbourhood’s best) as well as the highly attractive, buzzy outdoor courtyard that becomes the hotel’s centrepiece come summer. For design-savvy clubbers with a bit to spend, there are no peers. 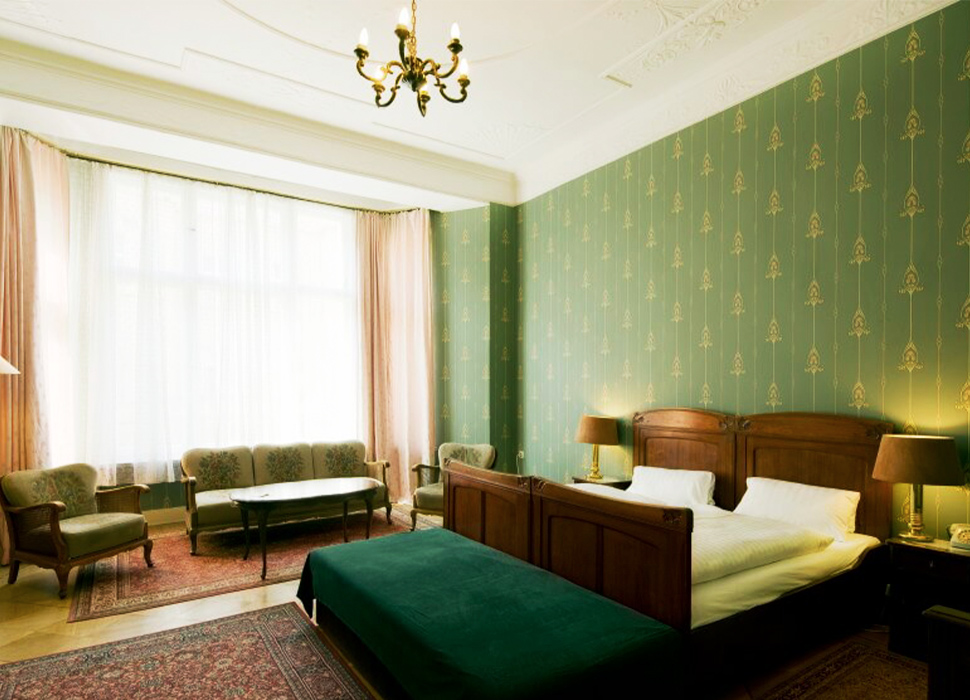 For Belle Epoch Berlin on a budget, this small but delightful, retro-fabulous guesthouse on a side-street of Kurfürstendamm occupies a 19th-century tenement house that was once home to silent-movie star Asta Nielsen. With beautiful period interiors, you get a strong sense that not much has changed since her heyday: the rooms are large and capture an understated bygone glam without feeling fusty and the hard-to-beat location is more or less close to everything in west Berlin. The rate includes breakfast. 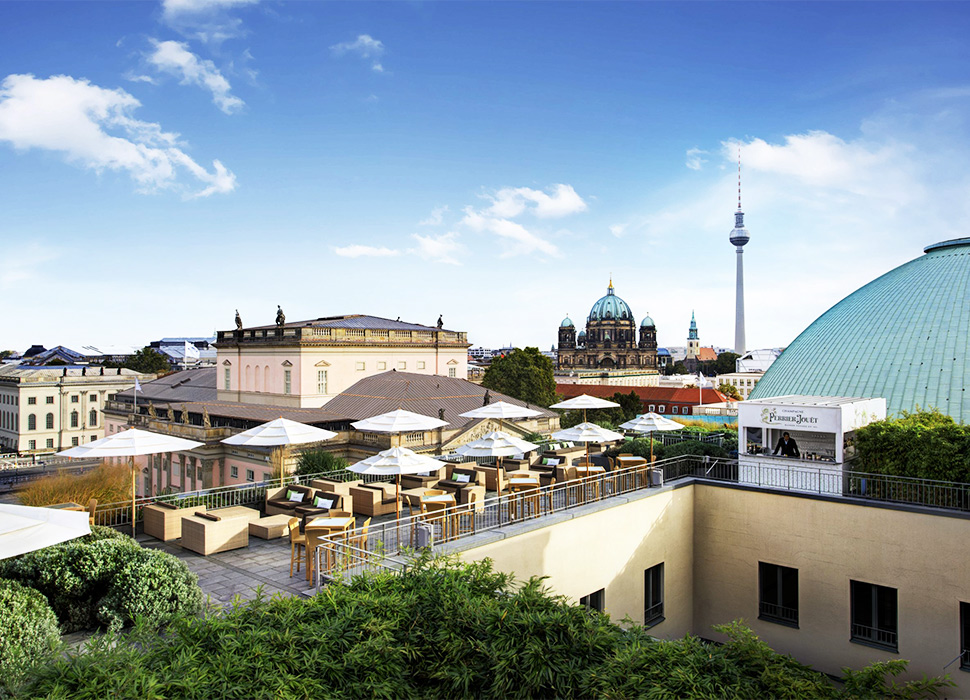 Enjoy a Roman holiday on the hotel's excellent terrace 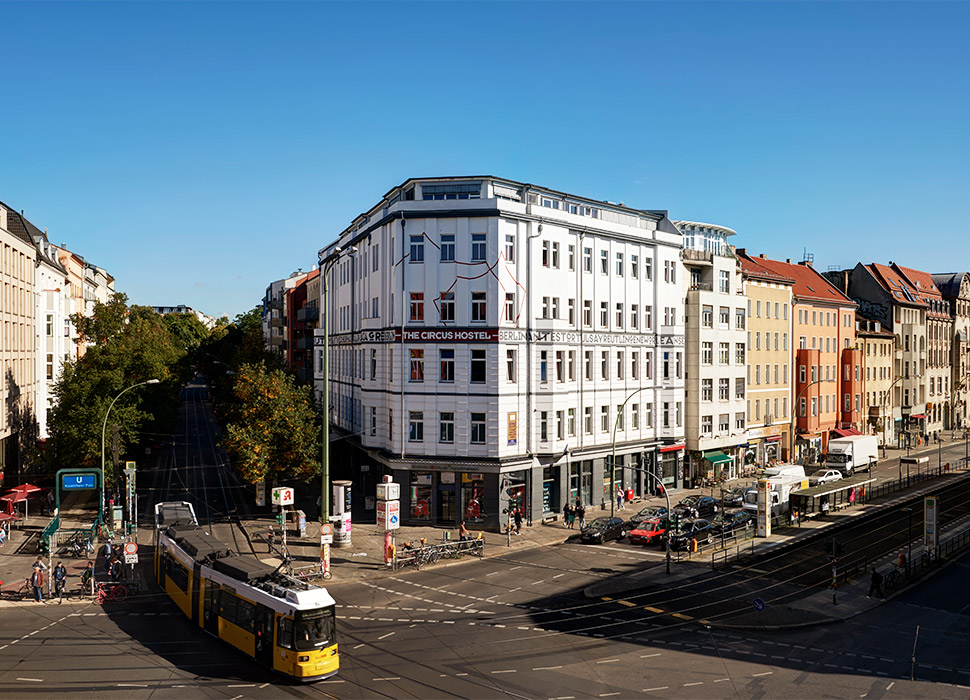 No clowning – Circus is the best hostel in town / Credit: Giacomo Morelli

Forget dingy discount digs, this handsome, hard-to-beat hostel on Mitte's Rosenthaler Platz has clean, designer dorms as well as a number of seriously good value private rooms (the best with balconies and pleasing city views). Staff are friendly and spaces like the bar, café (with its superb breakfast served until 1pm) and leafy outdoor terrace feel more like a boutique hotel than a backpacker bolthole. Just across the Platz, the same owners run the equally ace-value Circus Hotel. 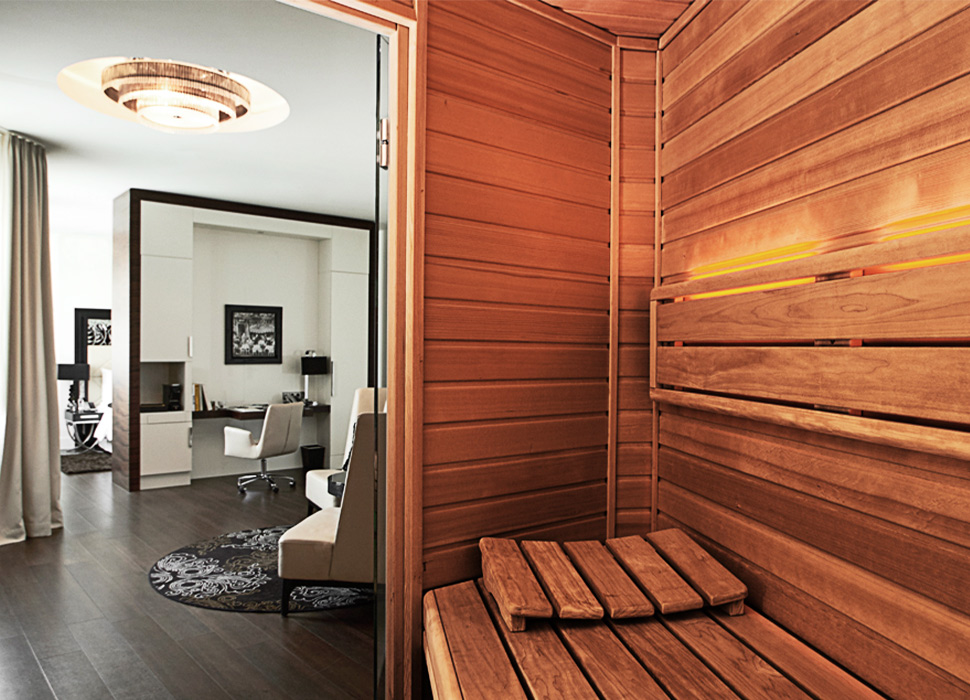 A suite with a sauna / Credit : SE7ENTYN9NE

A historic address it might be but, despite once hosting stars such as Brigitte Bardot, this grand hotel close to Berlin’s Kurfürstendamm district does updated, Weimar-era glam and isn’t trading on bygone glory. With smart, switched-on service and contemporary design that cleverly complements the Art Nouveau structure, nothing here feels dated in the wrong way: food and drink are bang on trend and the five-star frills include a rooftop spa, outdoor courtyard and Michelin-worthy restaurant. 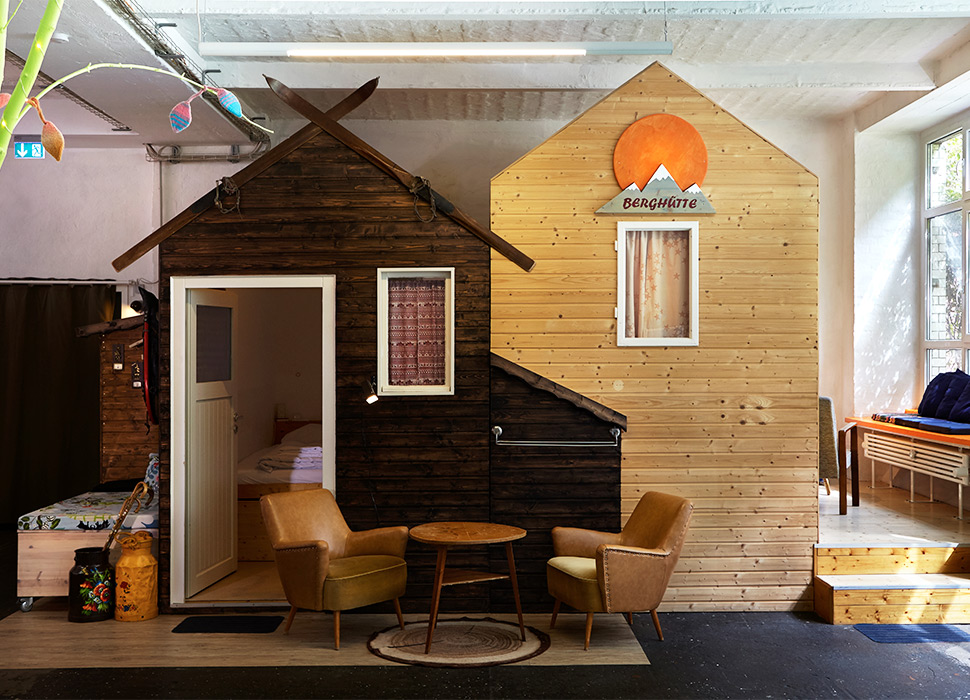 OK, a self-styled “caravan hotel” isn’t going to be for everyone but, if you’re game for a slightly out-there, Berlin-style spot of urban glamping, then this is one of the best-value hotels in town. You get a choice of a 1960s or 70s vintage caravan (or mountain hut) contained within a former factory in the city’s now-very-trendy Neukölln neighbourhood and wake up to a decent-enough breakfast in the leafy common area. It shouldn’t work but, strangely, it does: sense of humour required. 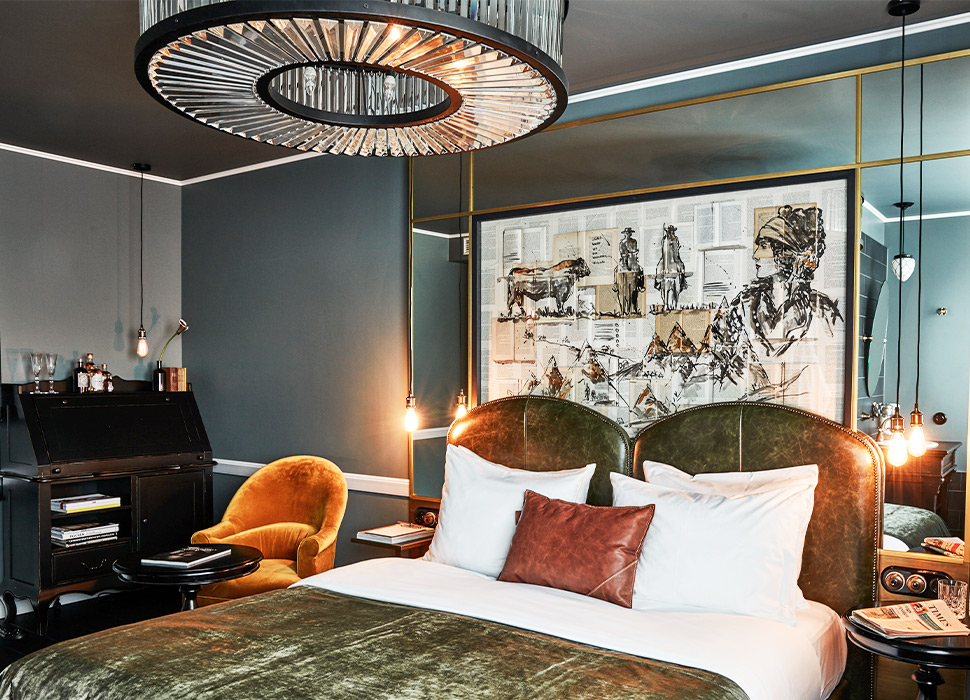 For design smarts without the hefty price tag, this Berlin outpost of the natty Amsterdam-based Sir hotel chain is up there with Michelberger. Known for its art galleries and bookshops, the Charlottenburg neighbourhood is quieter, but the hotel itself is an unfussy, friendly affair with beautiful, Saar Zafrir-designed rooms and a bookish vibe that trades on the neighbourhood’s literary history. In summer, there’s a lovely outdoor garden while stylish, no-fuss restaurant, The Butcher, does burgers and beer, year-round. 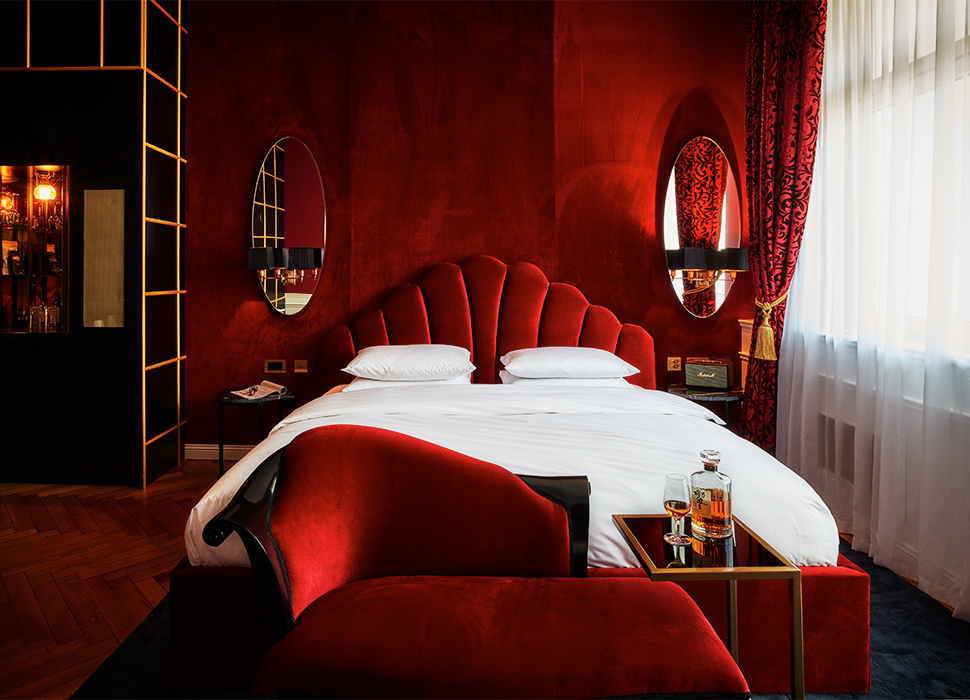 Another distinct, only-in-Berlin option takes the form of this super sexy, seriously seductive sleepover close to the city’s Kurfürstendamm district. It could so easily come off as a kitschy mess; instead, Israeli designer Saar Zafrir’s interior is 1920s Paris burlesque meets Blue Velvet-era David Lynch and feels like you’re in on a sercret whether you’re in one of the 58 boldly coloured rooms or the beautiful restaurant (with garden).