From Morzine to Chamonix, Les 3 Vallées to Val d’Isère, France is home to absolutely stonking ski resorts of every stripe. These are the best of them

Our love affair with French ski resorts shows no sign of waning – France is the number one destination for British skiers, and it seems we can’t get enough of the combination of high, purpose-built resorts and traditional mountain villages that make up many of France’s largest ski areas. Whatever level of skier or snowboarder you are, if you like sliding down the snow among picturesque surroundings before having a hearty meal featuring lots of melted cheese, then there’s a resort in France for you – and these are the best of them.

Done with the big guns? We can't imagine why, but hey – these are the best alternative ski resorts in Europe.

And when you just want rip-roaring visuals and terrifying gradients, check out our list of the most spectacular ski runs in Europe. 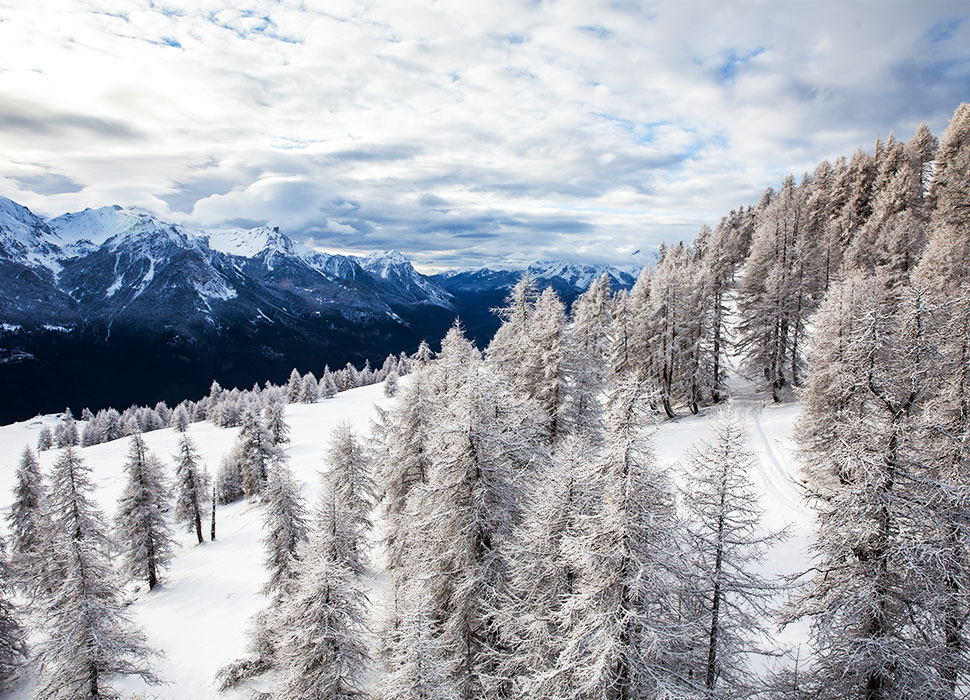 Peering out above the larches around Serre Chevalier / Image: Adobe Stock

It’s the high treeline that makes Serre Chevalier a special place to ski. Compared to resorts further north in the Alps, many of Serre Chevalier’s pistes are lined with larch forests; this means visibility is better on whiteout days, the runs swoop through the natural inclines, and the off-piste opportunities for ducking and diving among the trees are endless. Throw into the mix four distinct resort bases running the length of the valley, including Europe’s highest town, the fortified old city of Briançon, and you’re in for a great holiday.

Fly to Grenoble or Turin 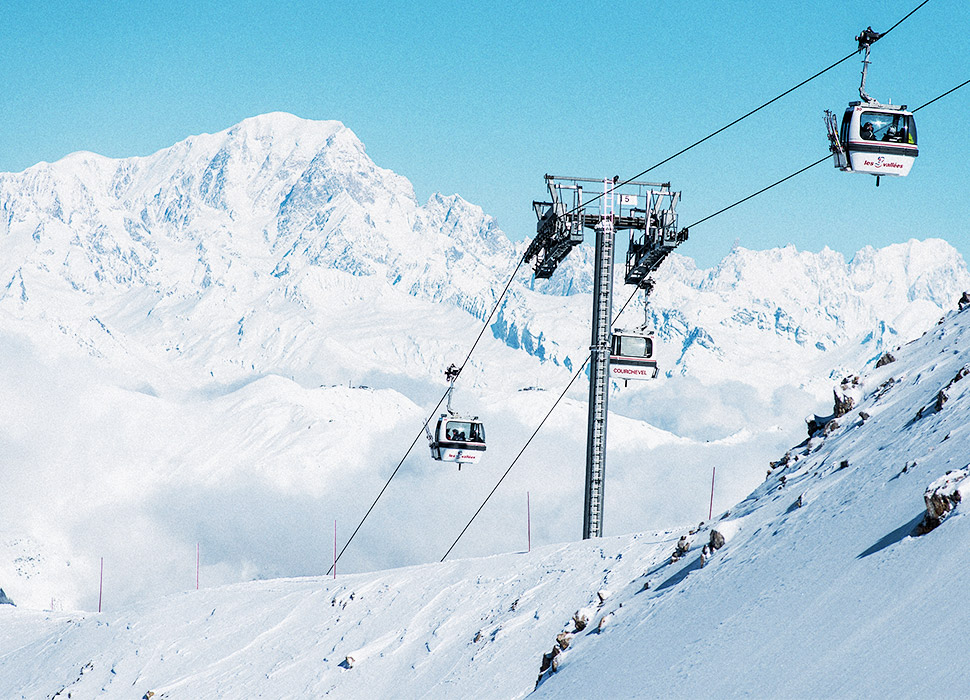 Visit Les 3 Vallées, the world’s largest linked ski area with over 600km of slopes, and you’re getting a heck of a lot of snow for the price of your lift pass. As the name suggests, the resort covers three connected valleys and is home to four main resorts – Courchevel, Méribel, Val Thorens and Les Menuires – as well as several outliers, like Brides les Bains, St Martin de Belleville and La Tania, among others. Accommodation options stretch from obscenely luxurious to refreshingly cheap, and if you don’t find a slope you like among all the terrain here then there’s something wrong with you. 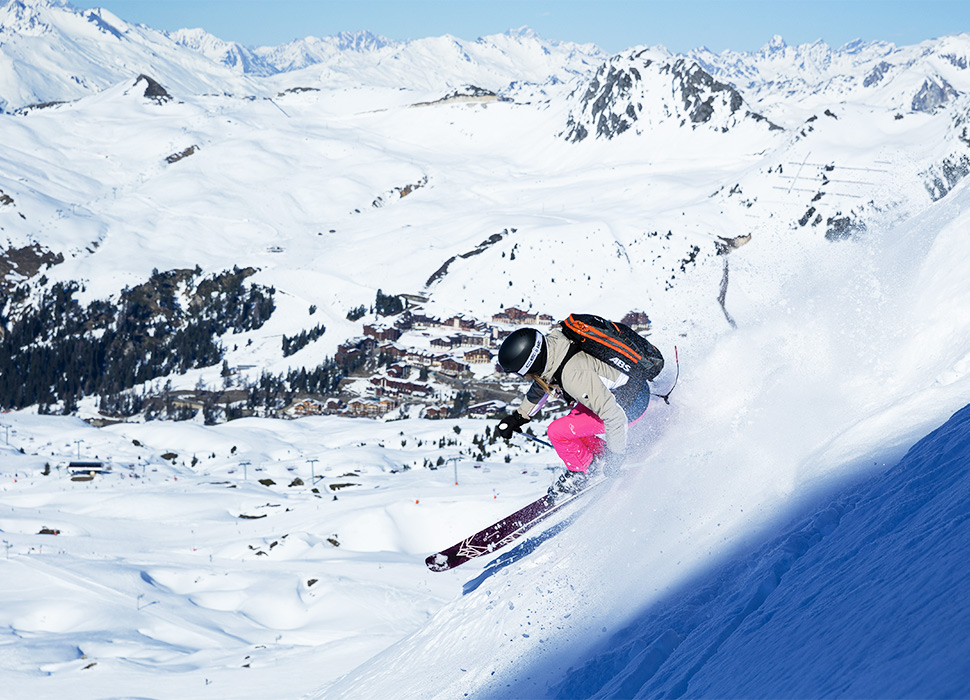 La Plagne isn’t fussy or fancy, and that’s why we like it. A collection of 10 villages, some purpose-built some traditional, provide plenty of apartment accommodation with a few hotels, and are surrounded by miles and miles of intermediate terrain. Challenges exist on the outskirts, while the centre is very much about cruising blues, fast reds and beginner-friendly nursery slopes. For an added bonus, La Plagne’s 225km of pistes are linked to neighbouring Les Arcs by a whopping great double-decker cable car – all in, it comprises the Paradiski region and totals 425km of runs. 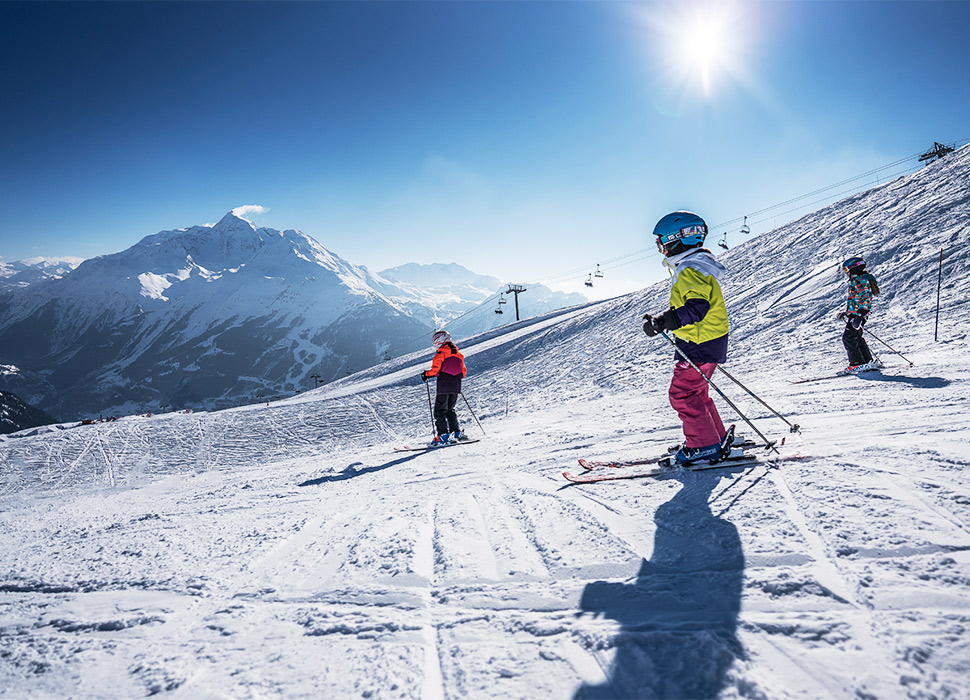 We love La Rosière for a family ski holiday, whatever the age the children are. Little ones will have a great time learning and playing in one of the two huge and sunny nursery areas, while older ones have lots of fun runs to progress to. Set high, at 1,850m on a south-facing plateau overlooking the Tarentaise Valley, it’s heaven for intermediates (with 143km of slopes), and is linked to the resort of La Thuile over the border in Italy. The international appeal of pizza in Italy for lunch is a great challenge for the week! 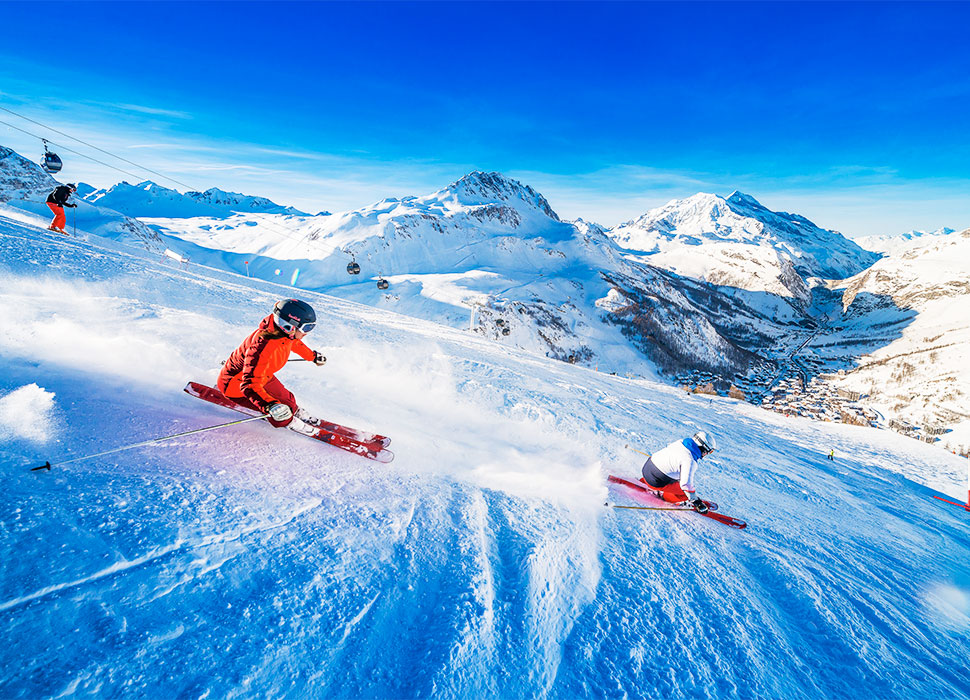 Famed as much for its party scene as for its formidable terrain, Val d’Isère manages to be all things to all people. Experts love the off-piste and racing the Olympic and World Cup runs La Face and OK; intermediates thrive on the extent and variety of the red and blues; and beginners are very happy on the resort’s nursery slopes, never far from one of the many welcoming hotel terraces that line the snow. More than in enough in its own right, Val d’Isère is linked to Tignes and shares 300km of pistes, including runs on the Grande Motte glacier at 3,456m. 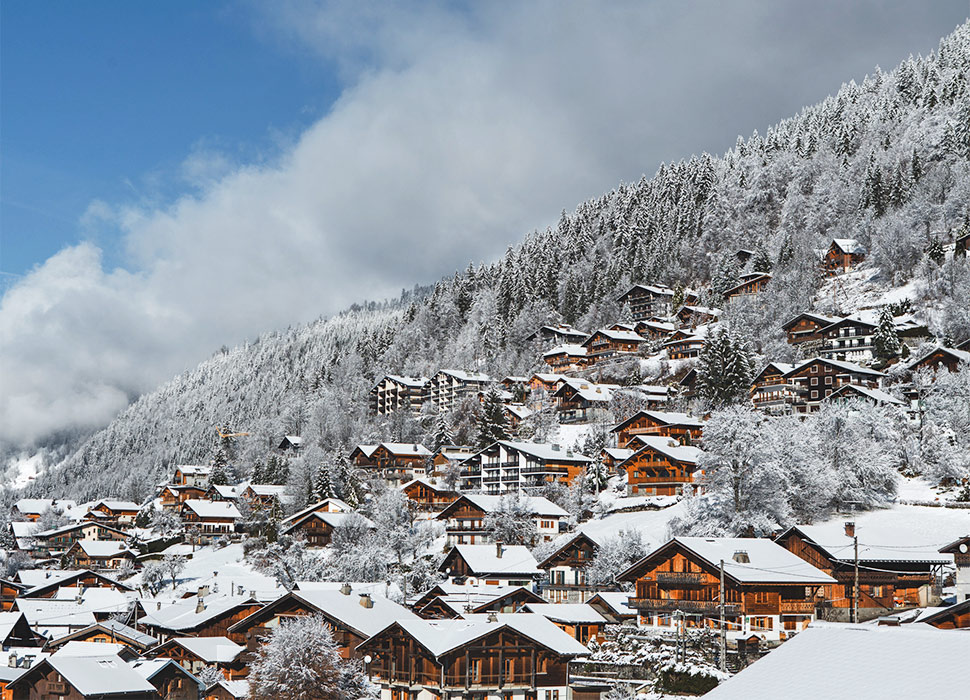 Morzine is a great hub from which to explore a wealth of Alpine villages / Image: ©Morzine-Avoriaz/Sam Ingles

A proper little Alpine town, Morzine has a great atmosphere whatever time of year you visit. Our favourite of the resorts in the vast Portes du Soleil region that straddles the French/Swiss border, it’s surrounded by rolling meadows that make for some wonderfully easygoing ski terrain, ideal for families and early intermediates. But the more adventurous need not be put off – there are 600km of slopes in the Portes du Soleil and a real sense of travel as you explore from village to village. 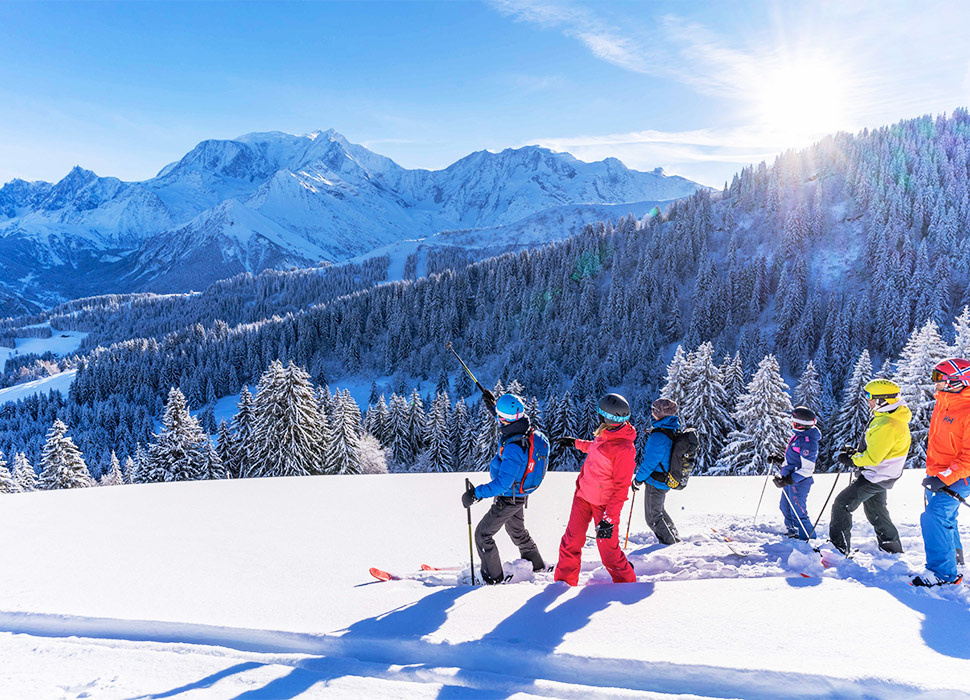 St Gervais is often overlooked as skiers whizz past on the road to Chamonix. But turn off before the A40 slices through the mountain and you’ll find a laidback but beautiful spa town, confident in its attractions; for to give it its full name, St Gervais les Bains has been welcoming visitors to its thermal waters since the early 19th century. The skiing doesn’t get more scenic – Mont Blanc dominates the skyline – and early intermediates in particular will love the area’s 263km largely tree-lined slopes. To top it off, St Gervais is part of the 400km Evasion Mont Blanc ski area, which also includes Megève, Les Contamines and Les Houches. 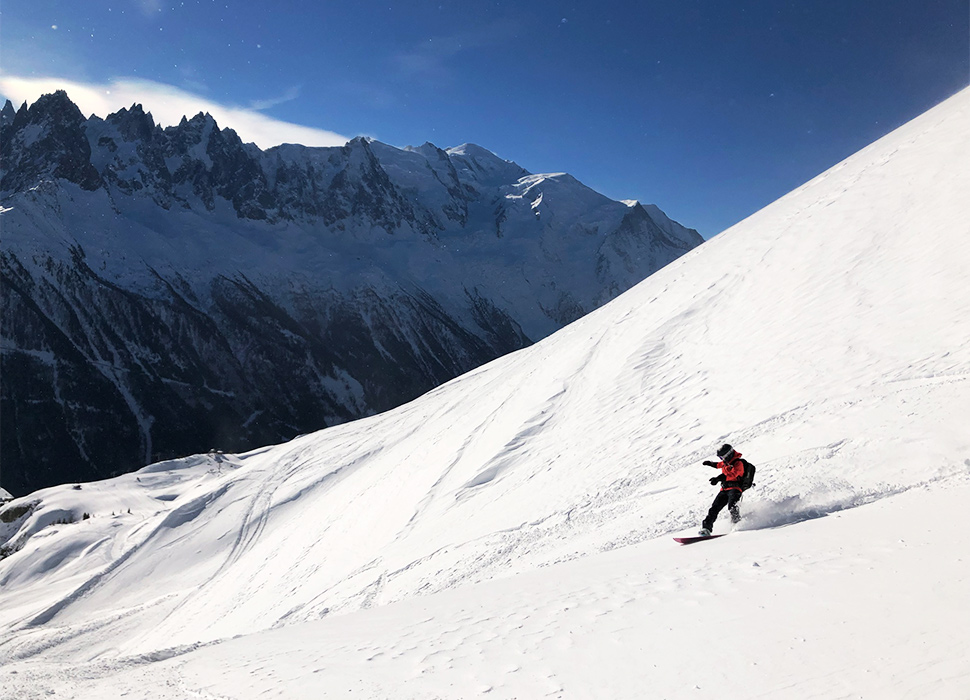 Chamonix has its own magnetism; some sort of invisible pull that attracts adventurous and expert skiers and snowboarders from around the world. It might have something to do with it being at the base of Mont Blanc, Europe’s highest peak, which creates an unbeatable amount of terrain. Four separate areas are spread out along the valley, each more extreme than the other, and the opportunities for proper off-piste are infinite. The town reflects the mountain’s spirit – it’s a vibrant, exciting and utterly authentic place bursting with life. 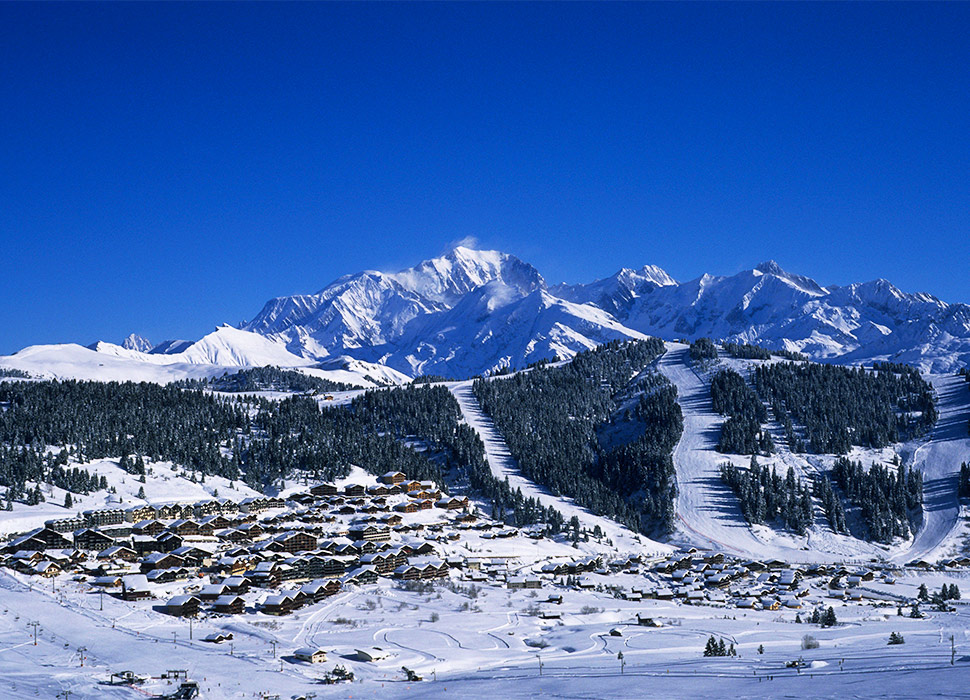 A maverick choice not often found on ‘best of’ lists – not because it’s not a 'best', but simply because the Espace Diamant is largely unknown in the UK, and that makes us like it all the more. A collection of six resorts, many of them traditional mountain villages where locals are more interested in making Beaufort cheese than hitting the slopes from dawn 'til dusk. Of them all, Les Saises is the liveliest and a great value base to explore the 192km of runs. Increasingly popular for ski touring, the area has endless views of the Mont Blanc massif, only 20km away as the crow flies. 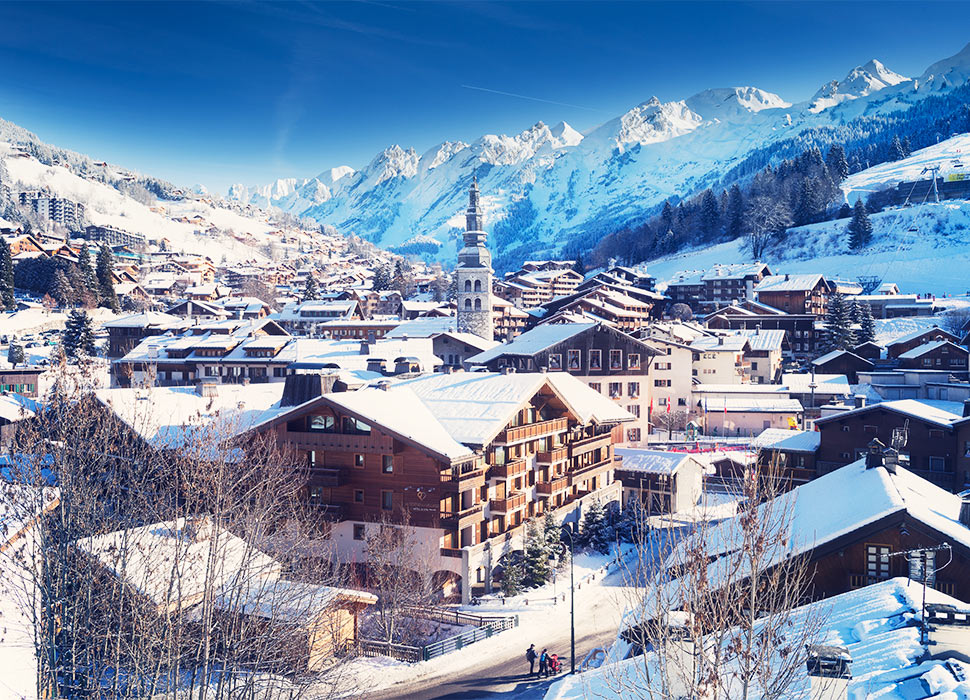 First loved because it’s close to both Lake Annecy and Geneva airport, La Clusaz grows into a long-term relationship because it works on so many levels. The traditional French village provides a proper slice of mountain life, and beginners are treated in style at the top of the Beauregard gondola. But happiest here are adventurous intermediates – many of the 132km of slopes dip and dive around the mountains, and the most challenging are in the Balme area. Le Grand Bornand and St Jean de Sixt are also on the Aravis lift pass, taking the total runs to 211km.