A team of French inventors think their robot can rival a professional pizzaiolo. We taste test their pie-in-the-sky idea – but will it be a mega bite?

It’s a sunny afternoon on the outskirts of Paris and a robot is making my lunch. There are several excitable children next to me with their noses pressed against the glass and we’re all gasping with glee. But this isn’t Disneyland’s latest show – it’s Pazzi, the world’s first fully automated pizzeria.

Let’s be clear: this is not a production line. Pazzi makes each pizza to order, working at roughly the same pace as a human chef – if a human chef had three arms. Customers place their order at a touchscreen and then, in graceful synchronicity, the dough is cut, stretched and shaped, the sauce spread, the toppings topped, the pizza baked and boxed, and placed in a hatch for collection, precisely four minutes and 30 seconds later. Entrancing to watch, the robot’s motions were inspired by watching real-life pizzaiolos at work, for ‘maximum elegance’. They even load the dishwasher afterwards. No, you can’t put one on your wedding list.

When you're done with pizza, you'll need pud – and here's where to scoff the world's best éclair in Paris.

Future schmuture! We learn to cook like it's 12,000BC with Sweden's hottest chef. 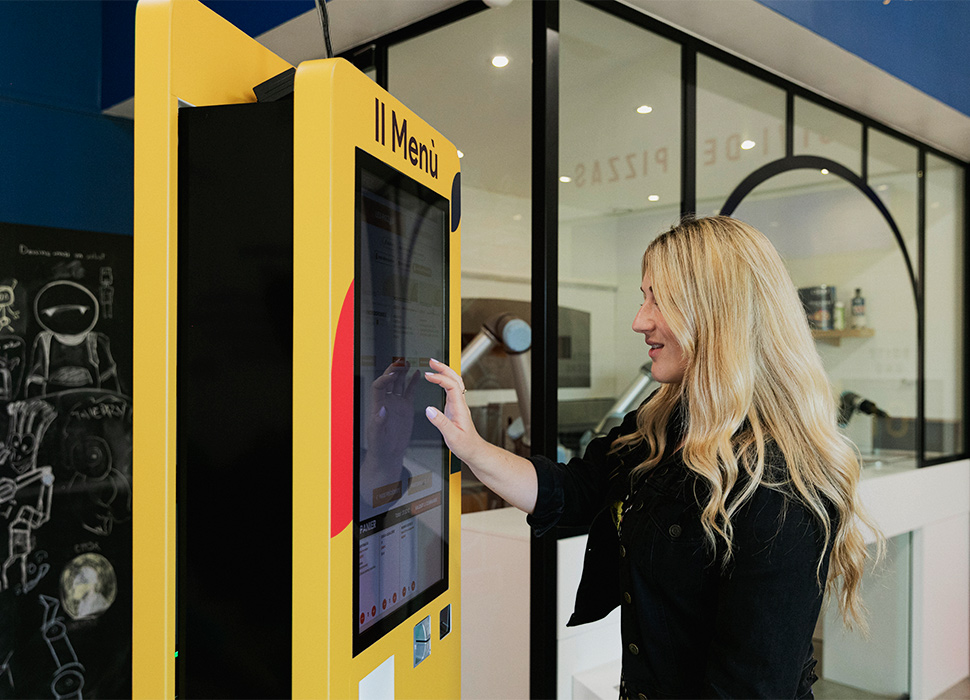 It’s a creation of French startup EKIM, whose co-founders Sébastien Roverso and Cyrill Hamon hit on the idea for Pazzi when they were engineering students and sick of eating low-quality food at unsociable hours. Together the pair have worked since 2013, improvising with existing robotics and everyday objects (the special lightweight pizza paddle was originally made from fishing rods) to perfect the system. Still, despite its sci-fi appeal, the team maintains that Pazzi isn’t such a big leap from existing food tech.

“It’s funny how you define ‘robots’,” says the company’s CEO Philippe Goldman. “If you go into the kitchens of the big chefs, the three-star Michelin talents, they’re full of robots.” Just before COVID struck, the first full-scale automated ‘Pazziria’ opened in the Val d’Europe shopping mall, a stone’s throw from Disneyland Paris. But today, I’m at the Pazzi Lab, a mini-test kitchen on the same site as EKIM’s workshop, wolfing down my order: the caponata, laden with grilled aubergine, onions, capers, plump Leccino olives and puddles of mozzarella. I was sceptical to begin with – aubergine on pizza can often be pallid and spongy, like chunks of packing foam – but this is entirely delicious. My compliments to the coder. 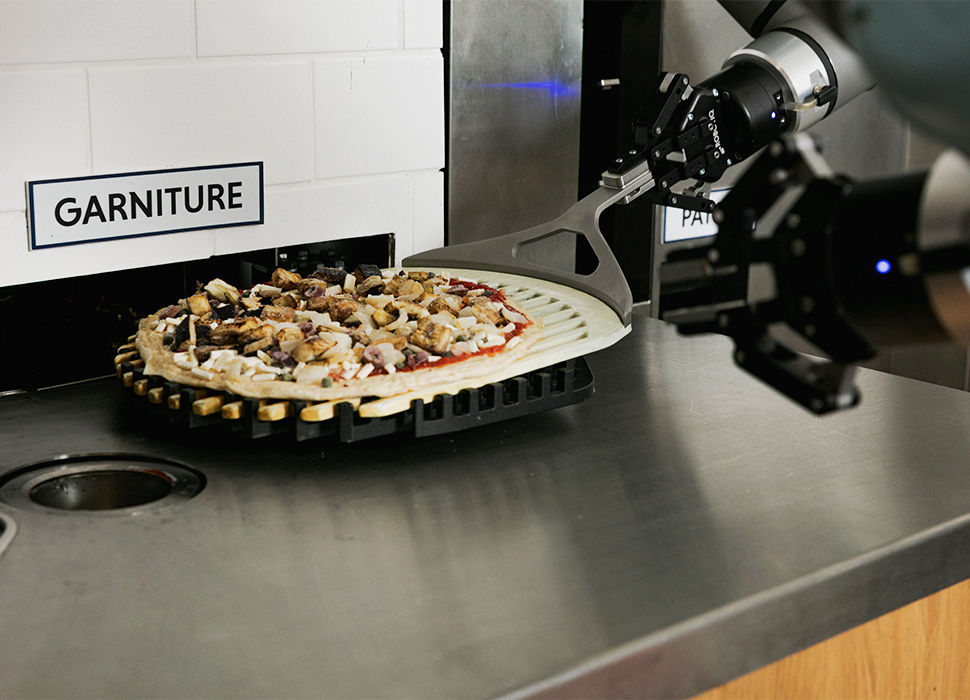 The automaton prepares to cook

However, it needs to be delicious, because Parisians know their pizza. In fact, France is the world’s second-largest consumer of pizza per capita (after the USA; Italy lags behind in fifth place) and the capital has no shortage of great slices, from old-school restaurants to any number of trendy newcomers oozing out of the 11th arrondissement each month. If robots are going to be the chefs of the future, Pazzi’s number-one priority isn’t whizzy tech, it’s taste.

“If you go into the kitchens of the big chefs, the three-star Michelin talents, they’re full of robots”

“It took us seven years to build the robots, but it took us two years to find the right ingredients,” says Goldman. All Pazzi’s vegetables are organic and sourced from Italy. The flour is from an 18th-century Normandy mill. There’s reblochon, bleu d’Auvergne and saint-nectaire cheese, all bearing the Appellation d’Origine Protégée (AOP) mark. In 2017, Pazzi appointed an executive chef, Thierry Graffagnino – three-time winner of the Pizza World Cup and professional fusspot – to really help them earn their crust. “He came in and said, ‘The dough is not good enough,’” Goldman says. 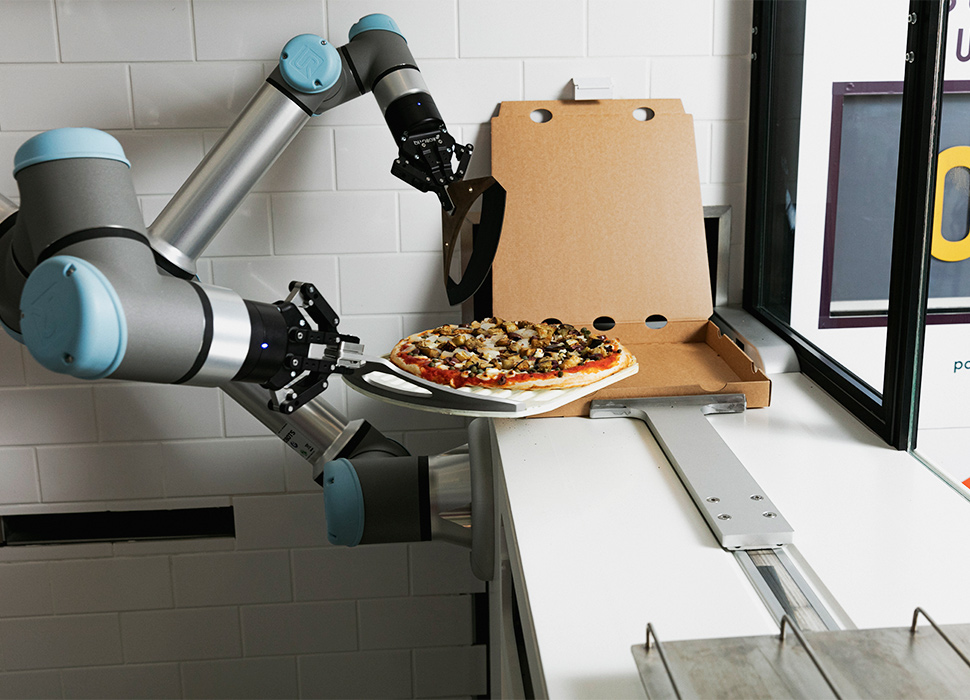 The darling droid is even trained to box up your dinner

Thanks to a patient, 48-hour proving process, Pazzi’s stone-baked base now meets Graffagnino’s exacting standards – and mine. It’s a far cry from the greasy apology of a generic takeaway. Crisp, flavoursome, with structural integrity, but with a tender, fluffy interior, it sits somewhere in the northern Italian tradition, closer to Roman pizza than fast and floppy Neapolitan style. And it’s cooked to precision, quelle surprise.

“It took us seven years to build the robots, but it took us two years to find the right ingredients”

There are 15 options, covering the classic (margherita; ham and mushroom), the leftfield (salmon and capers) and the truly unorthodox (the Manhattan, a cheeseburger homage topped with ground beef, onions and splodges of luminous cheddar). All pizzas can be customised with a choice of tomato, white or smoky red-pepper sauce and the freedom to add or remove toppings at leisure, the price adjusted accordingly. But they’re not throwing out the rule book entirely – there’s a limit of four toppings per pizza, to make sure nobody creates a monster. “The spirit is total freedom,” says Goldman, “up to four ingredients.” 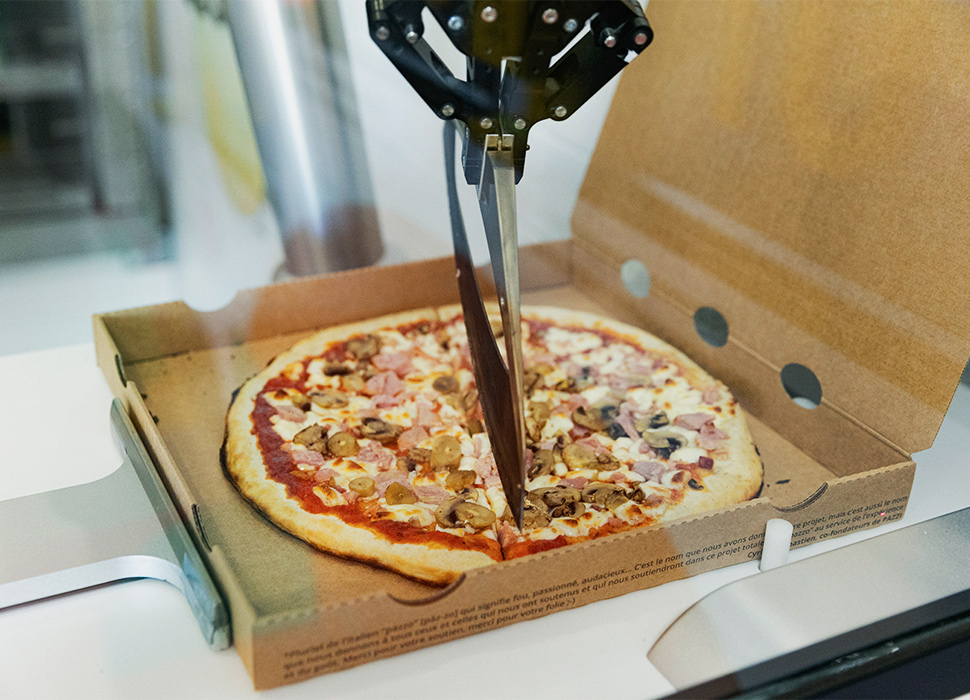 The dextrous doughbot: every nonna's nightmare?

Still, you have to wonder how the homeland of pizza feels about Pazzi (which translates as ‘crazy’ in Italian) reinventing their cherished wheel. Are they having to revive scores of horrified nonnas?

“People are very positive,” says Goldman. “We have actually had a lot of demand from pizza chefs saying, ‘I want your robot in my pizzeria.’” Would Pazzi ever automate a French classic? Could we see cyborg croissants or Dalek duck confit? “Us, no, but somebody will do it.”

For now, the team is focused on rolling out the Pazzi concept far and wide. EKIM recently raised €10 million of investment to accelerate its progress – but don’t worry, the cybermen aren’t coming for your favourite trattoria. “We create, we don’t replace,” they insist. 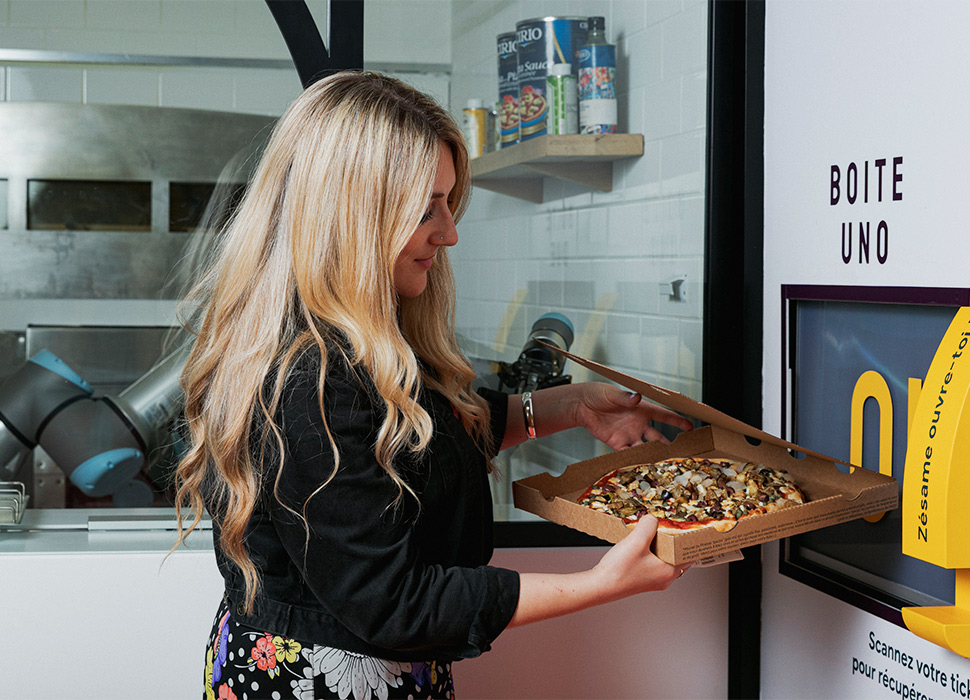 Four minutes and 30 seconds in, we're getting a slice of the action

Oh, and the android paranoid can relax – I’m assured there’s no danger of an uprising. “They’re very nice,” Goldman promises. Which is good to know, because you can’t tip a robot – they don’t have pockets.