Parisian YouTuber Alex Aïnouz shows you don’t need to be haughty to sauté like a chef. He shares the secret of perfect eggs

La Pâtisserie Cyril Lignac, in the 11th arrondisement of Paris, is one of the city’s best bakeries. Its croissants are mindblowing. We’re talking flaky, buttery, melting deliciousness, made fresh to order every day – exactly the treat you’d hope to find in the French capital.

It’s where I’m due to meet YouTuber Alexis Aïnouz this morning. Alex for short. Or French Guy Cooking, if you go by the name of the channel where he shows eager home cooks – like himself – how to make classic French dishes to restaurant standard. He arrives on his bike, dressed down in jeans and a hoodie, with an ear-to-ear grin that I soon realise is permanent.

We order a few of the famous croissants and, while they bake, drink coffee at the café across the street. Alex begins to relate his story in English, with the thick French accent that he’s known for among his mostly Anglophone viewers but that nevertheless vexes a few rare French râleurs (grouches). 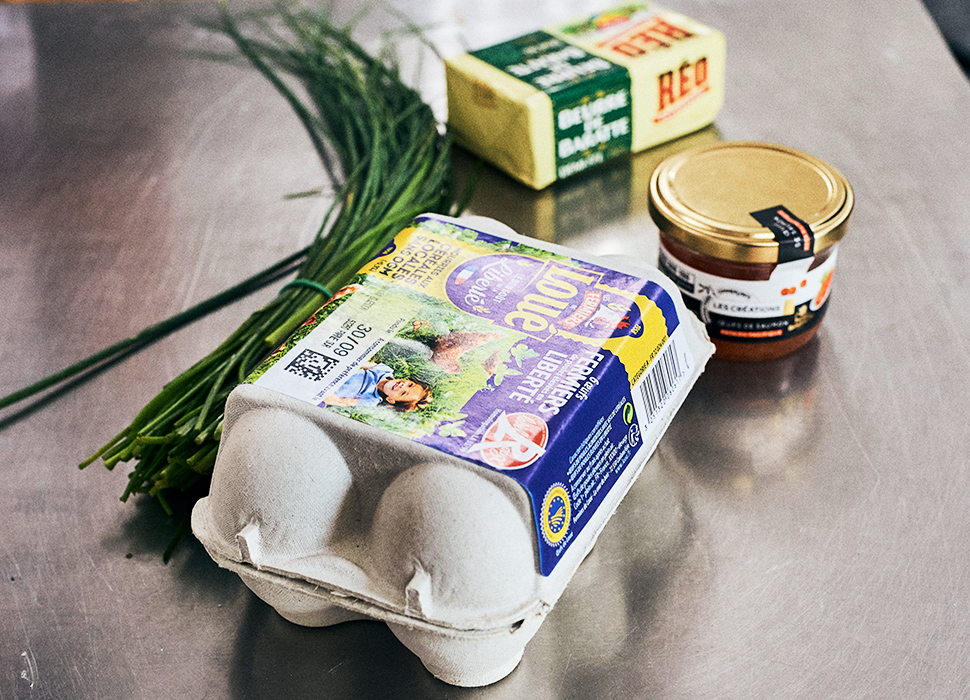 Why should anyone care that Alex is attempting to recreate the perfect ratatouille, onion soup or, even, croissant at home? The answer has to do with a certain stuffiness around food that has made French cuisine seem inaccessible to many. For decades, Paris’s kitchens have been governed by a hierarchical system of brigades and a faithfulness to tradition that also made them resistant to change.

Thankfully, however, the city is currently in the middle of a culinary revolution. Artisanal coffee roasters are taking the place of ho-hum cafés, and smart neo-bistros with no-frills dining rooms are appearing on street corners, inside of which innovative chefs serve dishes designed to share, featuring just a handful of fresh ingredients and loads of international influences.

Connected to all this is Alex, who’s amassed over 1.6m followers on his YouTube channel in seven years of cooking, and is putting a smiling face to the idea that food doesn’t need to be pretentious to be superbly tasty.

“My content is quite casual. It’s fun in the approach,” he explains. “But, in fact, my missions are very serious. One of them being: I really want to get the ‘posh’ out of French cuisine.” 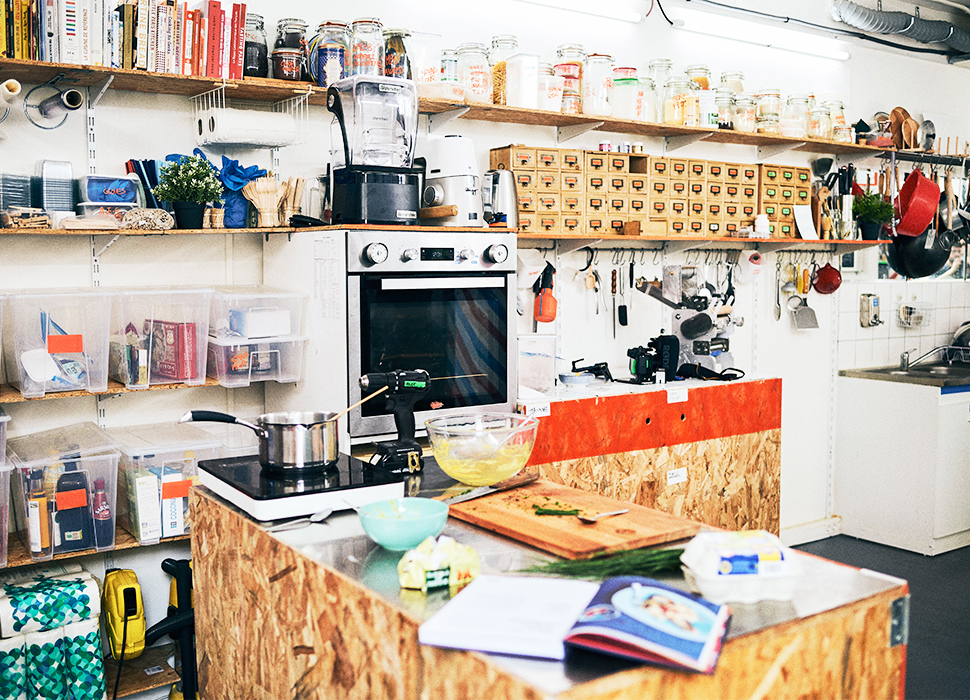 Alex's self-built studio is as much a workshop as a kitchen / Image: Antoine Doyen

It’s no coincidence that the cover image of his book, Just a French Guy Cooking, is this ‘French guy’ eating Japanese ramen. Which isn’t to say that Alex doesn’t love the French classics – pot au feu is one of his personal favourites. It’s the stuffiness he wants to do away with.

“Those dishes are about nothing other than love,” he says, passionately. “The only thing that is important is that I cooked for six hours straight, just because I love you.”

He’s talking, here, about his wife, who is both the object of his affections and the guinea pig for many of his efforts in the kitchen. “It might be fun from the outside,” he continues, “but from the inside, I think it’s a bit disturbing. Sometimes, my wife is literally eating the same dish for a week.”

This obsessive “madness”, as Alex terms it, is evident when we arrive at his studio just around the corner – the place where he films all his videos. To me, it looks more like a DIY workshop than a pro kitchen and for good reason. Alex is a former engineer and everything in here he built himself. He proudly produces a whisk attached to a chopstick that fits perfectly into his power drill – at once useful and entertaining. He even recently attempted to use an electric kettle to recreate the recipe we’re making today – his ‘You’ve been doing it all wrong scrambled eggs’ – now produced in a makeshift double-boiler of a Pyrex bowl placed over a saucepan. 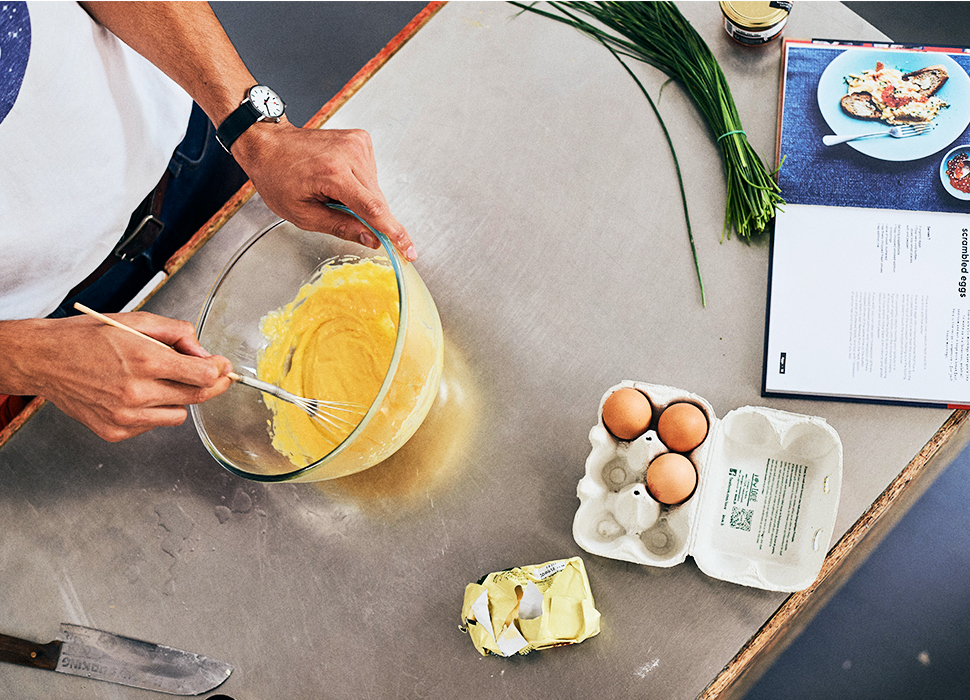 Let’s be clear, these aren’t the coagulated, overcooked eggs of your standard B&B breakfast buffet. They’re a magical, silky-smooth version that require a technique it’s taken Alex weeks to perfect. As much as his videos seem fun, Alex does “loads and loads” of groundwork for each, he says, and notes that “the critical moments are scripted”, which helps avoid mistakes. He doesn’t mind the odd disaster, however. They’ve made him who he is today.

“I was burning things from time to time, just apologising and laughing about it,” he says, while whisking constantly. “So I thought, that’s OK. I have the right to call myself a cook and then just be casual, not wear an apron, not have chef’s whites, just be a normal person who loves food.”

His eggs have finally reached the consistency he’s looking for – a “gel” that will set a bit more once they come off the heat. This key moment achieved, he drops in cold, cubed butter and whisks the creamy mixture some more, which now resembles a savoury egg pudding. 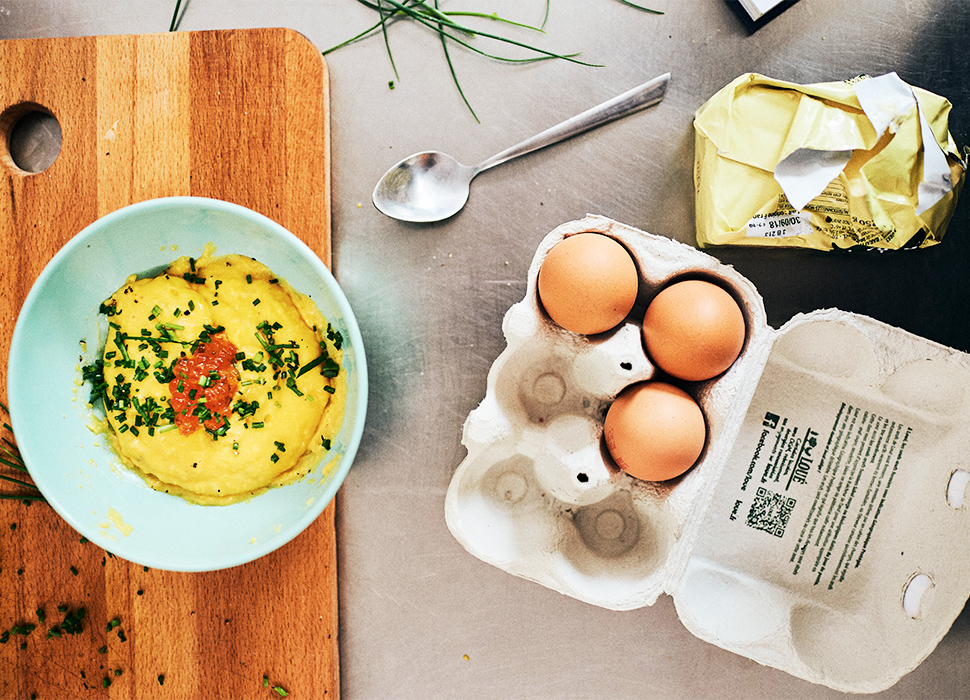 “It’s a bit different from the scrambled eggs that you find in most families, I guess,” he says, plating the eggs and topping them with chives and Japanese ikura (red salmon roe) for an Asian twist. These eggs are quite distinct from the ones he grew up with, for example, which were made by his father. “You could still see the egg white and  it was burned on the bottom,” says Alex, remembering. “I thought they tasted so good. They were made with love, for his kid, for his son.”

This creamier, more upscale version is still a special-occasion sort of dish, despite the ease with which he makes it. “On a weekday,” he says, grinning, “I would simply throw it all in a pan and accept that it’s just a scandal.”

He runs a custom-made knife through some peppercorns, and I see its blade is decorated with symbols meaningful to him: the YouTube logo, the date he opened his studio. “And a heart,” he says, “because the whole story is about love.” Then we dig in, sharing the same bowl.

They might not classically French, but – râleurs be damned – these eggs are creamy and rich and quite simply delicious.