A Guédelon worker has a smashing time / All images © Guédelon

A castle fit for a king - we explore a wild French history project 7,000 years in the making

For the past quarter-century, a group of Gallic artisans has been working on a true archaeological marvel. We pay a visit to France's finest living museum

A Guédelon worker has a smashing time / All images © Guédelon

Hidden among thick woods of central Burgundy, Guédelon is a construction site like no other. First of all, it’s eerily quiet: though as many as 40 builders work here, your ears won’t suffer the usual assault of power drills and pneumatic hammers. Instead, there’s a gentle purr of saws cutting through wood and rhythmic rapping of hammers on stone. A horse-drawn cart passes through, transporting oak logs, the animal’s hooves clip-clopping on the dirt road.

Mostly, though, it’s what’s being erected at the site that’s unique in the world. The Guédelon builders are putting together a 13th-century castle from scratch, using tools straight from the Middle Ages. Walking around the place feels like stepping back in time. Quarrymen, stonemasons, woodcutters, blacksmiths, tile makers… everyone working here is dressed in Medieval attire of long robes for women and simple tunics for men. The only give away that we’re still in the 21st century are the heavy work boots peaking from underneath linen pant legs (per EU safety regulations). 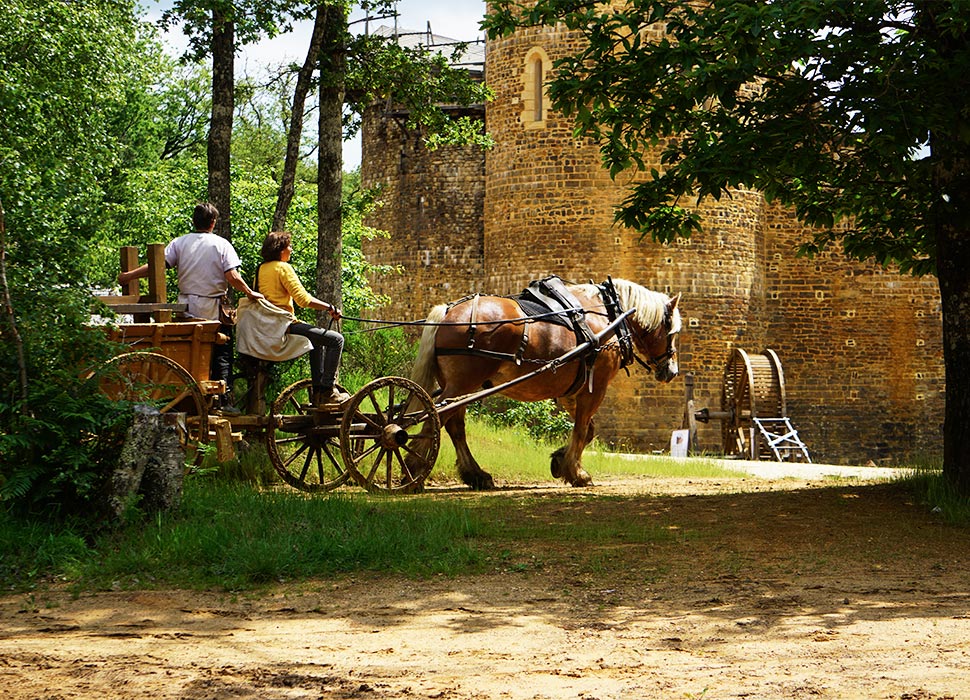 Some cod-Medieval types, horsing around

Clad in a grey tunic strapped with a simple leather belt, Florian Renucci, the master mason, mills around, overlooking the work in progress. Since it’s Monday, Renucci is scheduling tasks for the week to come. “Master mason is like a conductor of an orchestra,” he explains. Renucci knew he wanted to work in Guédelon from the moment he first heard about the project 25 years ago. It seemed insane – it still does – but as an art historian his curiosity was piqued. Then living in Paris, Renucci dropped everything and moved to this spot of remote countryside, 2.5 hours away from the capital.

The whole idea of building a new castle was born just two years earlier, in 1995. Michel Guyot, the owner of Saint-Fargeau castle near Guédelon, ordered an archeological survey of his Renaissance residence and was amazed to learn that hidden within the walls of the 17th-century building were remains of a much older, 13th-century fortification. Guyot has always loved castles – as a young man he went deep into debt to purchase and renovate the château in Saint-Fargeau. The idea of possessing another, surprise castle made his mind spin. For obvious reasons, he couldn’t have it extracted from within the walls of Saint-Fargeau. But what about re-building it nearby instead, he wondered? 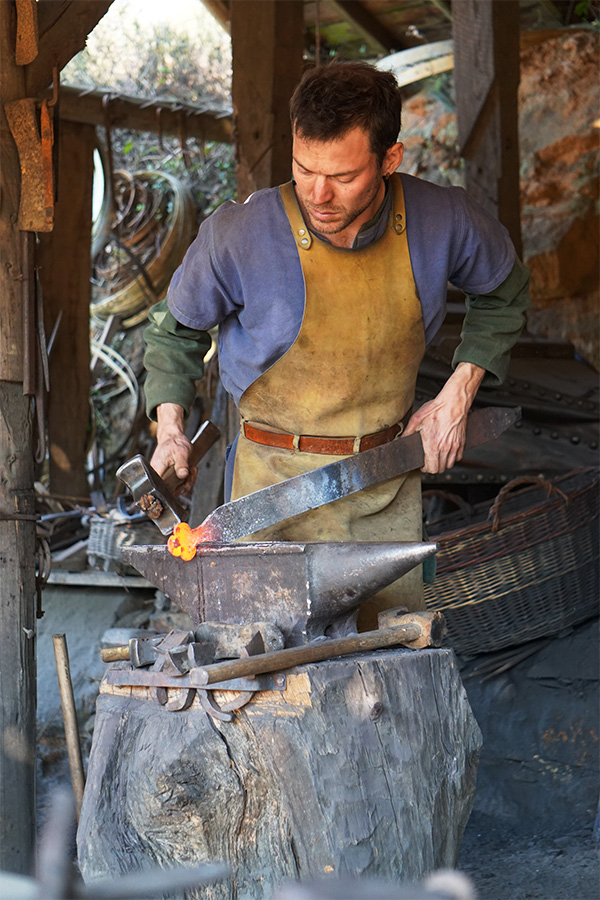 An artisan takes to his anvil

Guyot gathered a small group of castle enthusiasts and archaeologists and went out looking for a perfect site to build a medieval castle from scratch, somewhere not too far from Saint-Fargeau. They needed a place with access to all the building necessities: stone, wood, water and sand. The forest in Guédelon seemed perfect, and in 1997 the team obtained a building permission. On 20 June 1997, Guyot placed the first stone for what would become the world’s only 21st-century Medieval castle.

At first, the building team was made up just of a few people – Renucci included – and all of them learning on the job. Expert masons and woodworkers, they had to often unlearn modern techniques and discover how things had been done centuries earlier. They searched for knowledge and inspiration by visiting nearby 13th century castles, paging through old manuscripts, and even deciphering stories etched into stained windows of Medieval churches. “These are often completely forgotten technologies,” Renucci says. 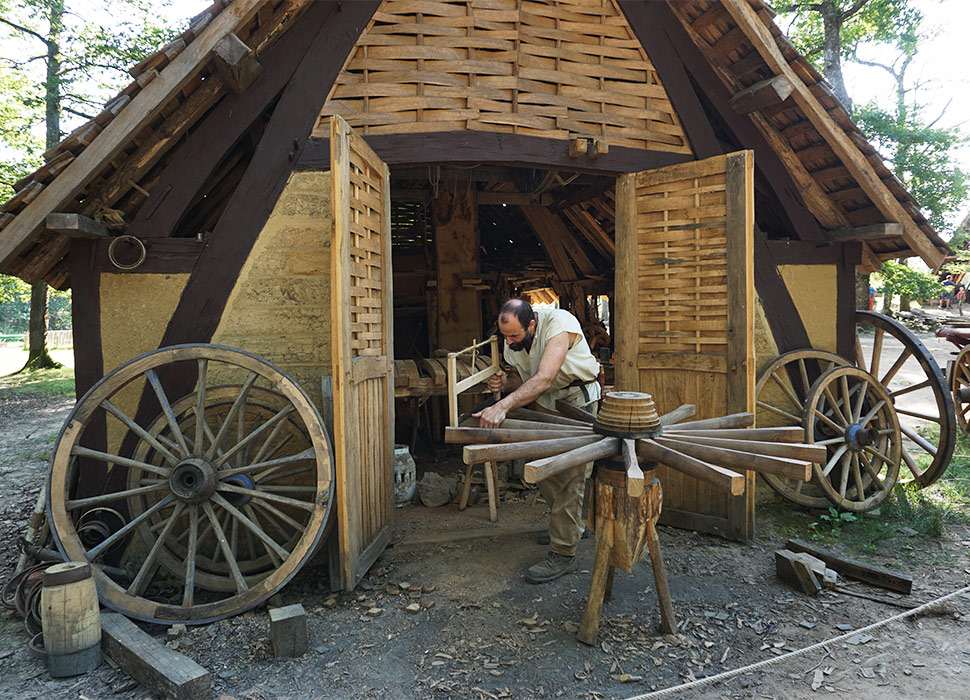 Even the outbuildings are historically accurate

To help immerse themselves in the 13th century mindset, Guyot and his team came up with a fictional back story for the castle. It’s the year 1228 and Louis IX sits on the throne of France. The lord of Guédelon – Guilbert, a low-ranking aristocrat – marries into a relatively well-off family. With his wife’s dowry he decides to construct a castle — yet his financial assets are still limited, so he can’t exactly afford a Louvre-size place. Instead, he commissions a small castle – basically a fortified manor house, with six towers, a chapel, and 3.5-metre-thick walls (times are turbulent, better safe than sorry).

When I first visited Guédelon in 2008, it still didn’t look much like a castle. Only the first floor was finished and the towers barely rose from the ground. By my next visit, in 2015, the chapel's vault was almost complete; as were the circular walls of the towers, with spiral staircases leading to the top. Today, the château looks nearly finished: the roof of the chapel tower is finished with rust-coloured tiles, as are the crenellated battlements (the tops of the defensive wall with regularly spaced gaps, perfect for defending the castle). Inside, the kitchen is fitted with a fireplace, while the vault’s ribs are painted in yellow and red ochre. 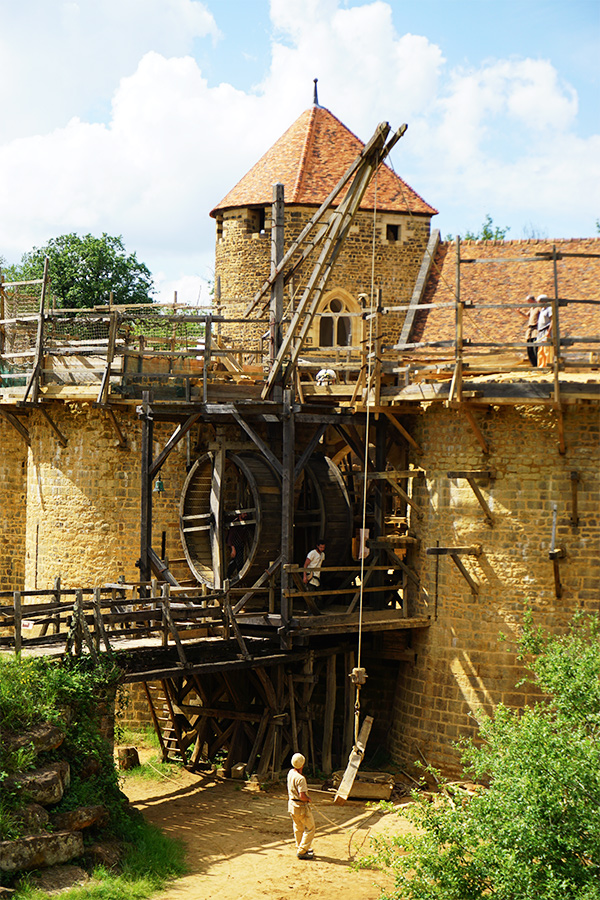 Pulling up the beams, 13th-century style

Yet there is still a long way to go. In fact, the fortress was supposed to be done by now, but the team faced plenty of challenges, not least their own self-imposed, ascetic limitations. “The difficulty is that you have to build everything only from the things you find around – stones, wood, plants. It’s as if you were building your house only from the stuff you could find in your garden,” Renucci explains.

What’s more, the builders had to learn on the job. It took five trials, for instance, before they managed to get the correct shape of the lime kiln, which is then used to make plaster and mortar. It also took years to master the use of the tile kiln. Early on, firing tiles was extremely stressful – a fragile process in which they could easily lose a whole season’s work in one firing.

Climate change can make things tricky, too: a 2019 heatwave cracked the castle’s parchment window half. For Valérie Lacheny, Guédelon’s painter and window-installer, it was back to the drawing board. After reviewing archeological data and heat-testing various materials, she’s finally settled on installing wax cloth windows instead, but the setback added to the already considerable delays in the castle’s construction. 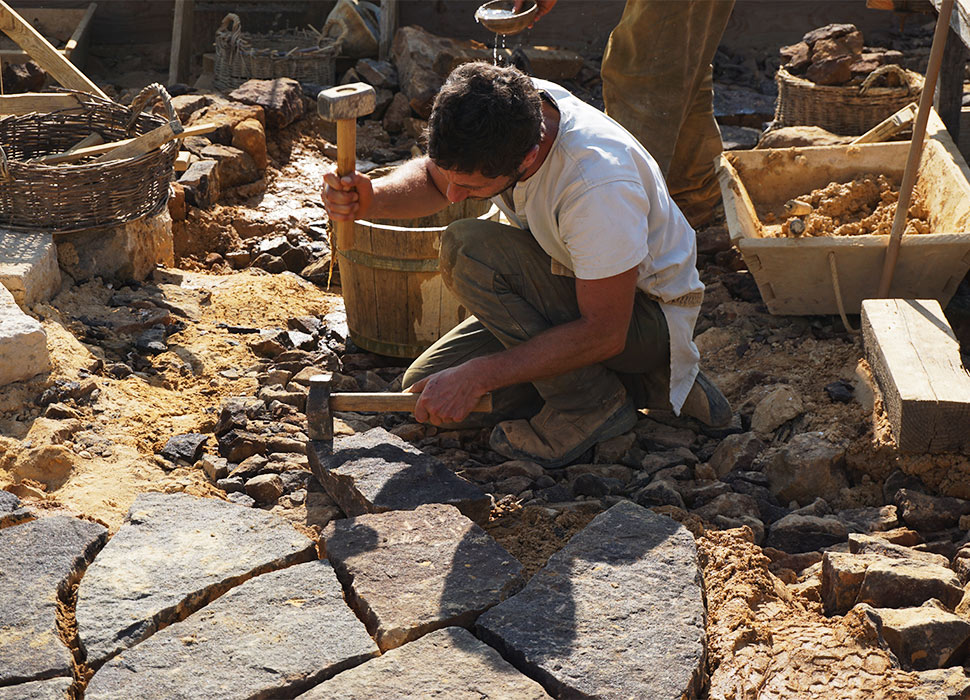 The learning processes are valuable from a scientific perspective, too. That’s one of the reasons Lacheny loves her job. “It’s not just simple manual work, it’s research at the same time,” she explains. Guédelon has a whole scientific committee of archaeologists, historians and castellologists (literally, castle experts), who not only approve various building decisions to ensure they are historically correct, but who can also learn from the site. Guédelon is the world’s largest project in experimental archaeology, after all.

Now, a quarter-century in, the site is as bustling as ever. Woodsmen are felling oak trees with hand axes, for timber that will become roof beams. Quarrymen split rocks with wedges, carefully observing the natural fracture lines and the colours (the darker the rock: the harder to split). Fixer masons, trowels in hand, are steadily placing stones one on top of another, while other workers nearby mix lime, sand and water to make mortar. In her atelier, Lacheny crushes rocks to extract pigments for painting. Slowly, steadily, the towers are climbing up, the windows are getting filled, and the interior walls are getting covered in plaster and colourful floral paintings. Lord Guilbert would be proud. 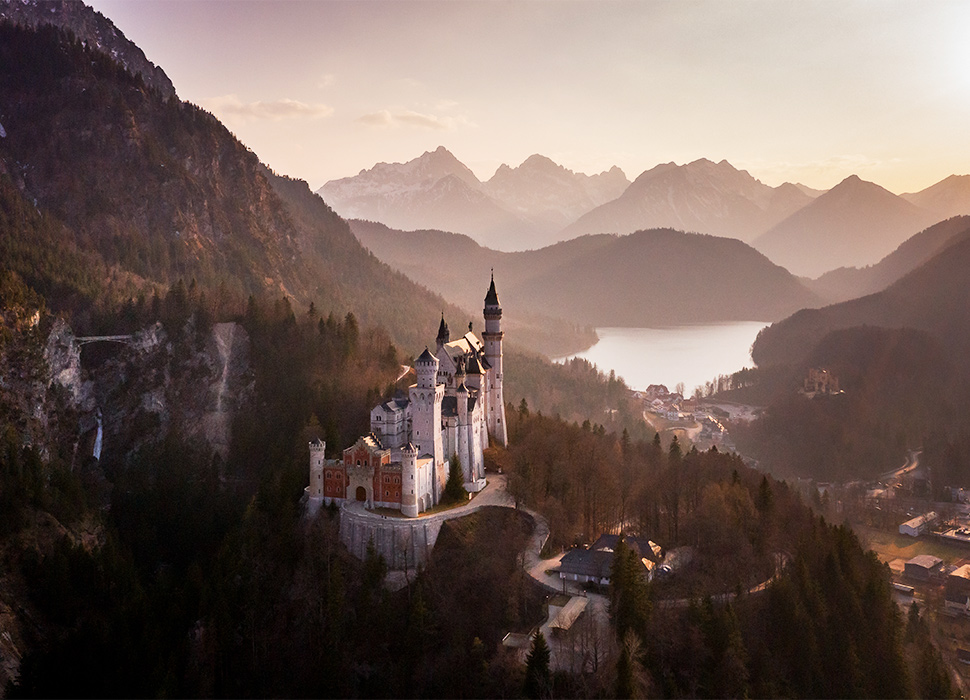 The Postman Cheval's Ideal Palace, Hatuerives, France
Perhaps even more impressive than Guédelon, this castle finished in 1912, built singlehandedly by an eccentric French postman, Ferdinand Cheval, in his own garden. He used only pebbles that he picked up over the course of 33-years on his work rounds.
Fly to Lyon or Grenoble

Neuschwanstein Castle, Bavaria, Germany
Built in late 19th century by Bavarian king Louis II, Neuschwanstein is a fairy-tale reproduction of a Medieval-style castle, but with all the newest technological comforts (hot water, flush toilets, etc.). It even served as an inspiration for Disneyland’s castle.
Fly to Friedrichshafen or Munich