Paris may be famed for its creamy, meaty, old-school Gallic cuisine – but a new breed is emerging among the classics. These are the city's best eco-minded restaurants and bistros

After some sightseeing with your ethical eating? These are, hands-down, the best things to do in Paris.

And, oh-la-la, here are the nicest restaurants in the city generally. 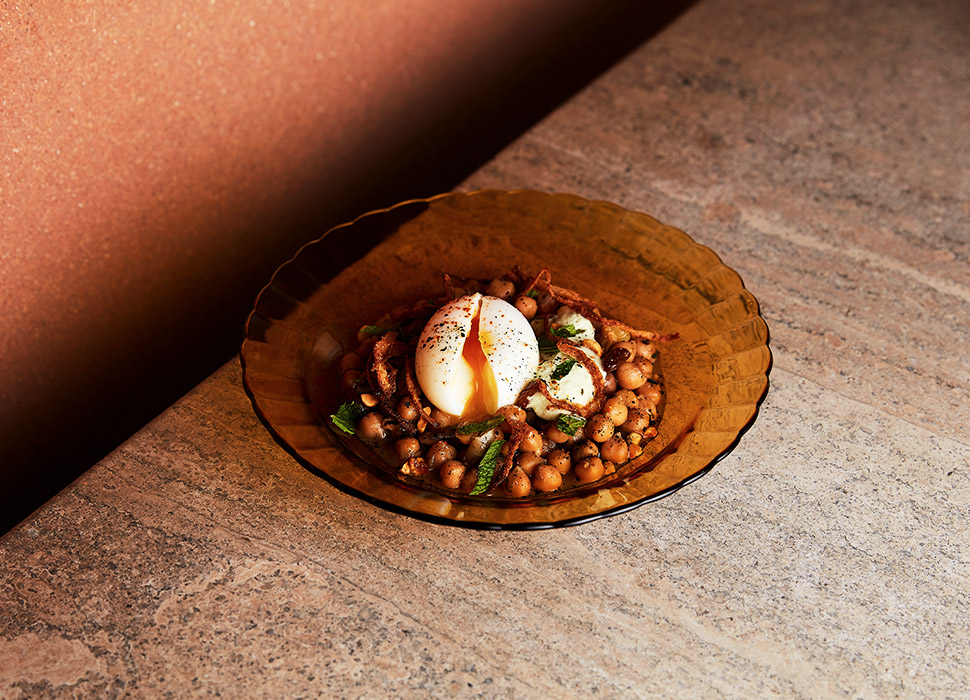 In the fall of 2021, Alain Ducasse, the second highest ranked chef in the world in terms of total Michelin stars (21 of them!), opened a 95-percent vegan restaurant in Paris. Despite his super high-end reputation, Sapid's head chef Marvic Medina prepares dishes that are fuss-free, affordable and delicious – think roasted white asparagus in fresh herbs and asparagus vinaigrette, quinoa casserole with winter vegetables and parsley, rhubarb compote with salted butter caramel and fresh pepper. It's as nourishing for the stomach as it is for the soul. 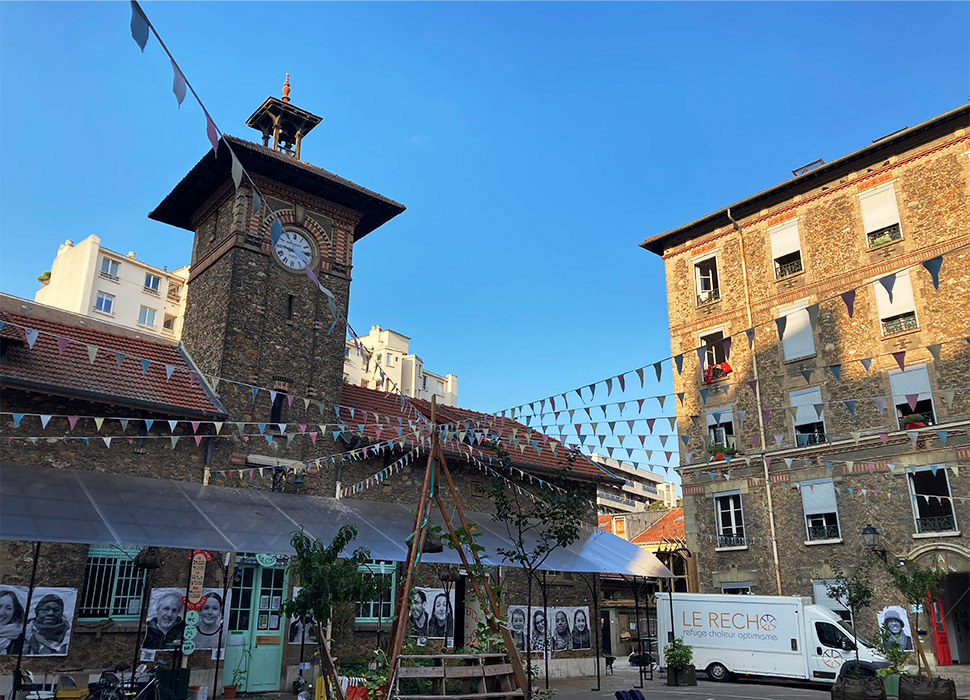 Dining at La Table du Récho, in Paris’s 16th district, is not just about eating green – it’s also about actively doing good, too. Besides serving delicious, mostly vegan food with a low carbon footprint, and practicing low-waste cuisine, the restaurant trains people from a neighboring refugee shelter in eco-friendly cooking. The chefs derive inspiration for their dishes from the shelter’s residents, and offer diners such delights as Afghan mantu dumplings or sticky rice in West African gombo sauce. The restaurant's apt motto? “Living together through food.”

Opened in 2019, La Table de Colette became Paris's first carbon-neutral restaurant by serving local food, limiting waste, cutting down on plastic and using green energy in its kitchens. Each dish, from caramelised potatoes to sardines in pear sauce, carries information about its carbon footprint; while meat and fish are served to give flavour to other ingredients rather than as a centerpiece. The restaurant boasts that its five-course dinner menu has a carbon footprint of just 1,600 grams of CO2 – that’s a carbon footprint equivalent to what it makes to process just 16g of beef. 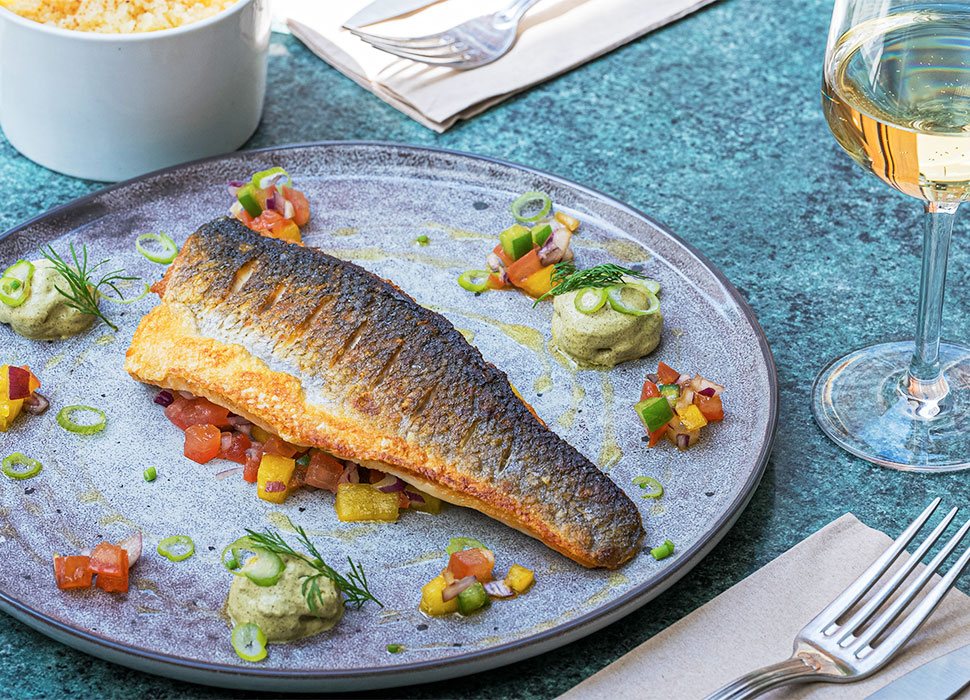 At Table Métis, the exposed-brick walls of a typical French restaurant are paired with wax curtains and African-style paintings. Haitian chef Romuald Métellus started the restaurant with Sylvain Ajavon, a Frenchman of West African origin. And although Métellus is a vegan himself, he doesn’t want to exclude omnivores. That’s why all the main dishes are available in three options: chicken, fish or vegan, the latter normally including pulled jackfruit. The sauces in which they are served, such as a peanut-based mafé, are thick and deliciously spiced. 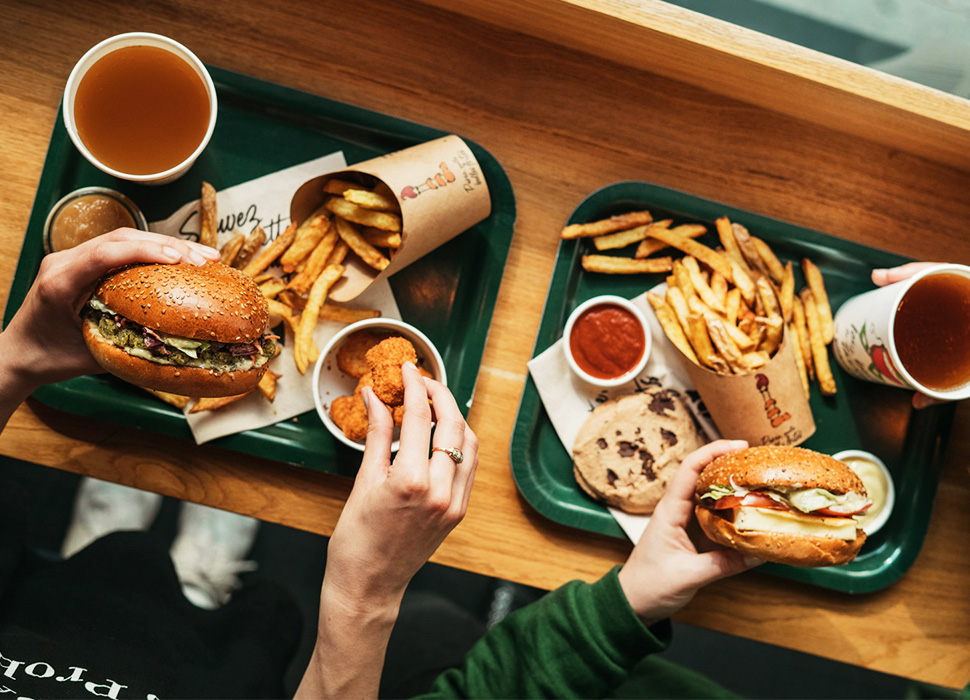 Everything at this fast-food chain, with seven locations throughout Paris, is certified bio – ketchup and mayonnaise included – while the meat is sourced from the Loire Valley. What’s more, there are no plastic bottles, plastic cups or plastic plates in sight. All the packaging at Bioburger is either made from recycled materials or is completely natural and compostable. All the restaurants’ leftovers are collected for composting, too, and redistributed to local producers as fertilizer. Even the furniture is second-hand. 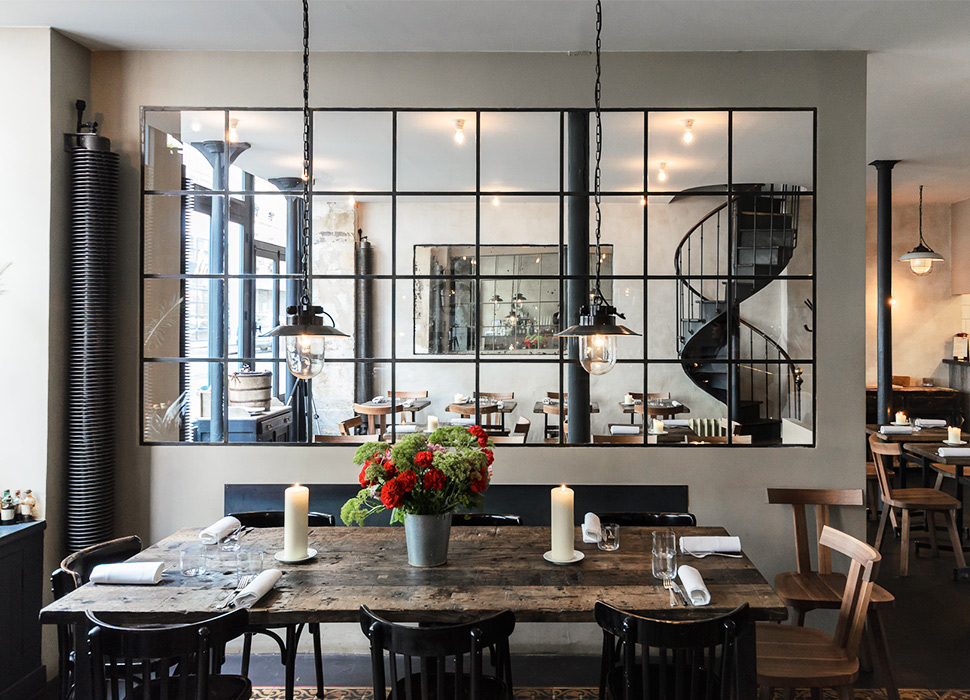 The chefs of Septime proudly claim that not even the tiniest crumb gets wasted in their kitchen. In fact, if there is a bit of bread left over at the end of the day, it'll be whipped into a savory “sauce au pain” (which features often on the menu). Between 60 and 80 percent of the dishes are vegetarian here, and meat usually just plays a side role. The wines, too, come from environmentally-friendly producers. Make sure to book a table early – it's hugely lauded and they fill up fast. 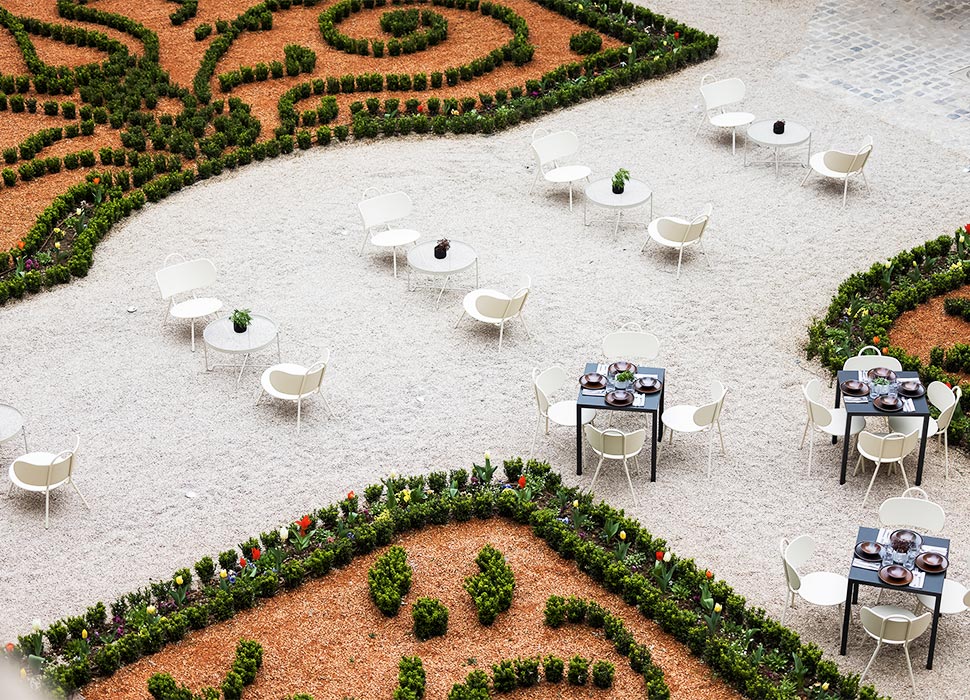 The fabulous Carnavalet gardens are a summertime home to Fabula / Image: © Maki Manoukian

From May 'til the end of October, the gardens of the Musée Carnavalet play host to a pop-up restaurant ran by Thibaut Spiwack – a chef decorated with a Michelin 'Green Star', awarded for sustainable restaurant practices. Spiwack doesn’t use any produce that has been air-flown and incorporates peels into his dishes to minimise waste. A zucchini farmer who delivers produce to Fabula even plays music to his plants, which, he believes, keeps them healthy while avoiding pesticides. The resulting dishes are beautiful and delicious – the zucchini carpaccio with feta cheese and raspberries is a fine example. 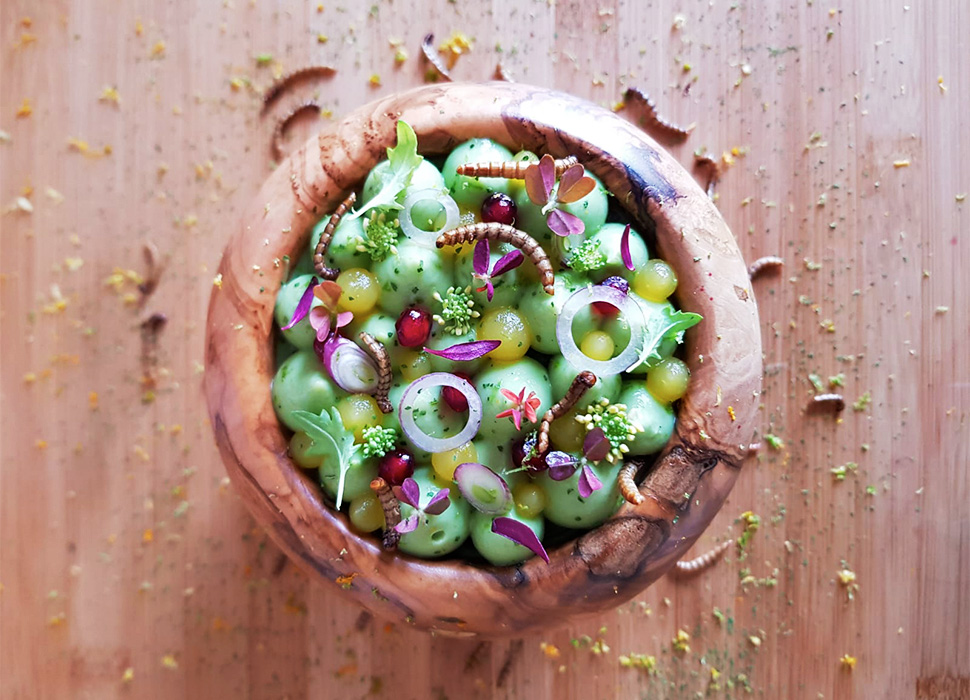 Alternative insect protein is the deal at Inoveat

A small bistro near the Pompidou Centre, Inoveat doesn’t immediately stand out among other Parisian eateries. One look at the menu, however, and it’s obvious this is a place like no other: think Thai-style mango salad sprinkled with mealworms; or buckwheat pancakes with beetle larvae, chia salad with seasonal fruits and caramelized mealworms. What this outré spot knows is that insects are ultra-efficient protein makers – it takes 12 times as little feed to get a pound of protein from crickets than it does a cow. The future is, literally, here.

The air at La REcyclerie is thick with the scent of aromatic herbs and wet mulch. That's in a good way – because almost nothing gets wasted here. In a way, even La REcyclerie’s building is recycled, as it occupies the site of a 19th century Parisian train station, the unused tracks transformed into an urban farm, which grows a wealth of vegetables and fruits: tomatoes, beans, blackberries, potatoes, all of which later get transformed into meals at the in-house restaurant of the same name. The vegetable peels, meanwhile, go to the farm’s 12 hens and two ducks, Minussio and Daisy – the suppliers of the restaurant’s fresh eggs.

If you’d like to try some traditional French cuisine but don’t eat animal protein, look no further than Le Potager du Marais – a cozy bistro tucked among narrow streets of the charming Marais neighborhood. Opened in 2003, it was one of the first vegan restaurants in Paris, specialising in translating classic dishes into plant-based versions. You'll dine well on pâté and buckwheat pancakes, as well as seitan “beef” bourguignon with gratin dauphinois potatoes, onion soup and crème brûlée.

Europe and Beyond
7 spectacular summer bars for the positive drinking crowd
France
A castle fit for a king - we explore a wild French history project 7,000 years in the making
Sponsored

France
Take a tour of Paris' coolest, need-to-know neighbourhoods
France
Learning the ropes - we get to grips with the sensual art of shibari in Paris
France
The 10 best ski resorts in France
Europe and Beyond
7 spectacular summer bars for the positive drinking crowd
France
A castle fit for a king - we explore a wild French history project 7,000 years in the making
Sponsored