The City of Lights is more than just the Eiffel Tower, y'know. Here's our rundown of the finest distractions in the French capital

1. Take in the skyline from Buttes-Chaumont 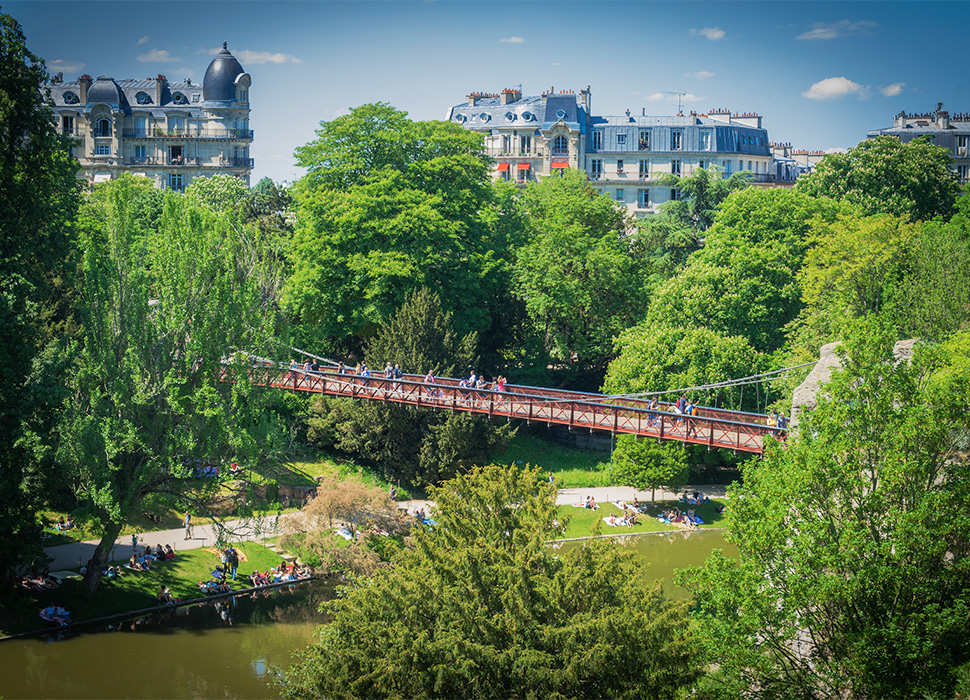 When Paris, at the behest of Napoleon III, was redesigned by Baron Georges-Eugène Haussmann in the 19th century, much attention was paid to the city’s green spaces. As a result, the French capital is home to nearly 500 parks, from the supremely manicured Tuileries leading from Place de la Concorde to the Louvre, to the wilder Buttes-Chaumont in the 19th. This verdant oasis, with its Romanesque Temple de la Sibylle folly and sloping lawns, is well worth the trek – not least for the views of Montmartre’s stark white Sacré Coeur basilica, which you can clearly see from the top of the hill. 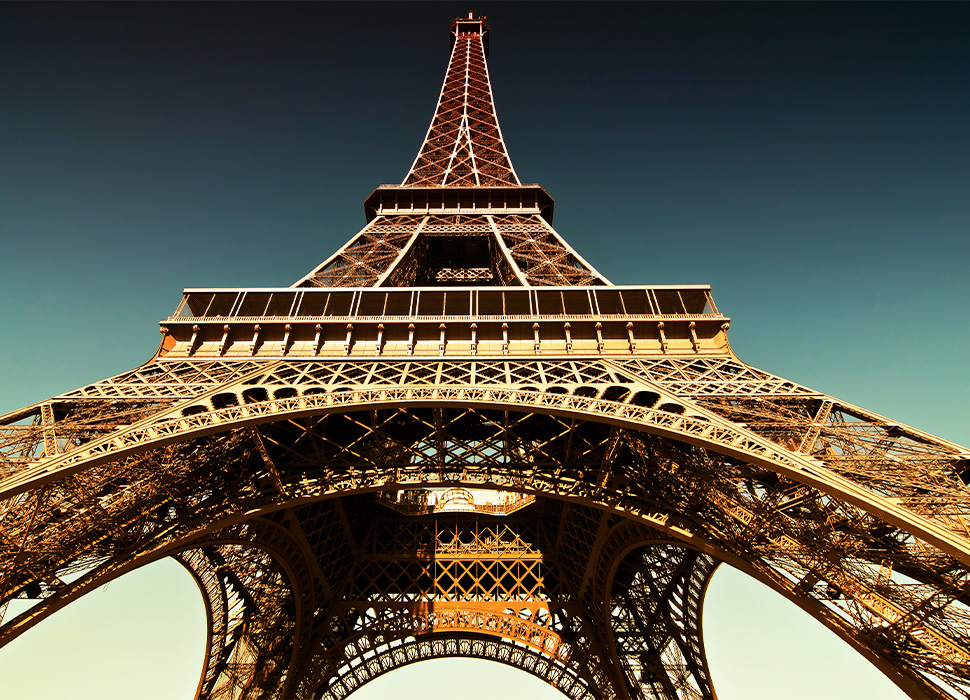 A picnic-eye view of the Eiffel Tower / Image : Getty Images

The Eiffel Tower was built in 1889, initially conceived as a temporary installation for the World’s Fair. It has since become an emblem of the city, complete with two restaurants and three observation decks. Reserve your ticket in advance to beat the queue, or skip the climb entirely and admire her from below with a picnic on the grassy Champ de Mars (for this, mes amis affamés, we'd pick up cheese at the nearby Fromagerie de Grenelle and a traditional baguette at Moulin de la Vierge bakery). Procure a bottle of wine from Vino Sapiens – yes, you can drink on the lawn – and lunch or dinner is served. 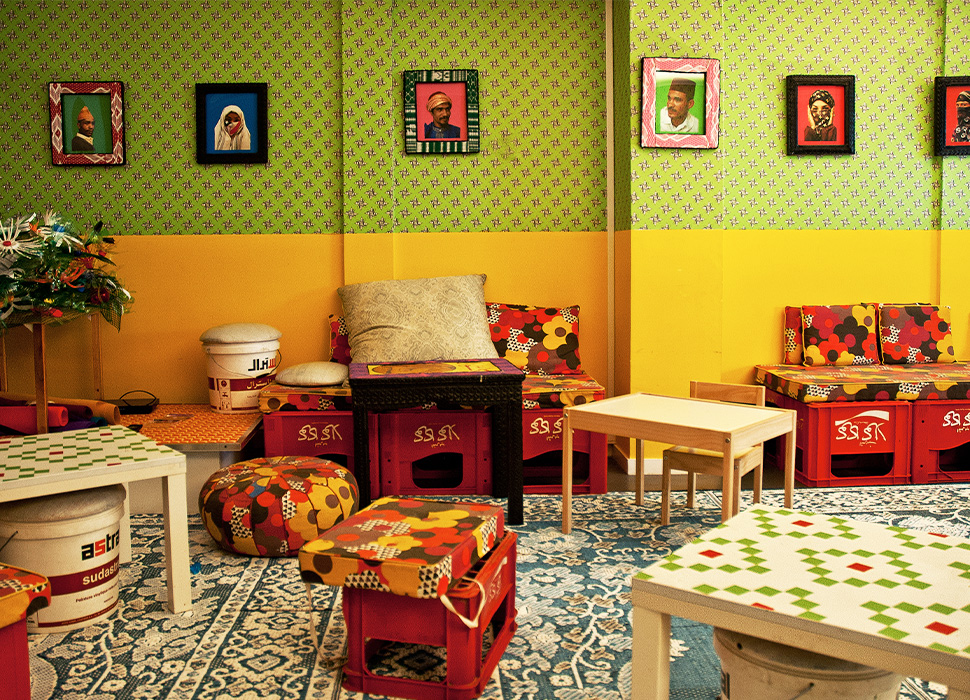 A colourful interior at the Institute of Islamic Culture / Image : ICI

Paris’ diverse Goutte d’Or neighbourhood in the 18th is home to a diverse African community, boasting markets, designers, artisans, and more. Be sure to visit the Institute of Islamic Culture, a beacon for contemporary cultural events, sample superior street food from Black Spoon food truck and stop by le 360 Paris Music Factory to discover artists from a wide range of genres from jazz to electro and bossa nova. If you want to really get a feel for the cultural panoply of the place, tap into the expertise of Jacqueline Ngo Mpii, author of City Guide – Africa in Paris, for an accompanied tour. Further south, the National City of Immigration History museum is an enlightening and profound institution which explores France’s colonial conquest of Africa.

3. Get institutionalised at a brilliant museum 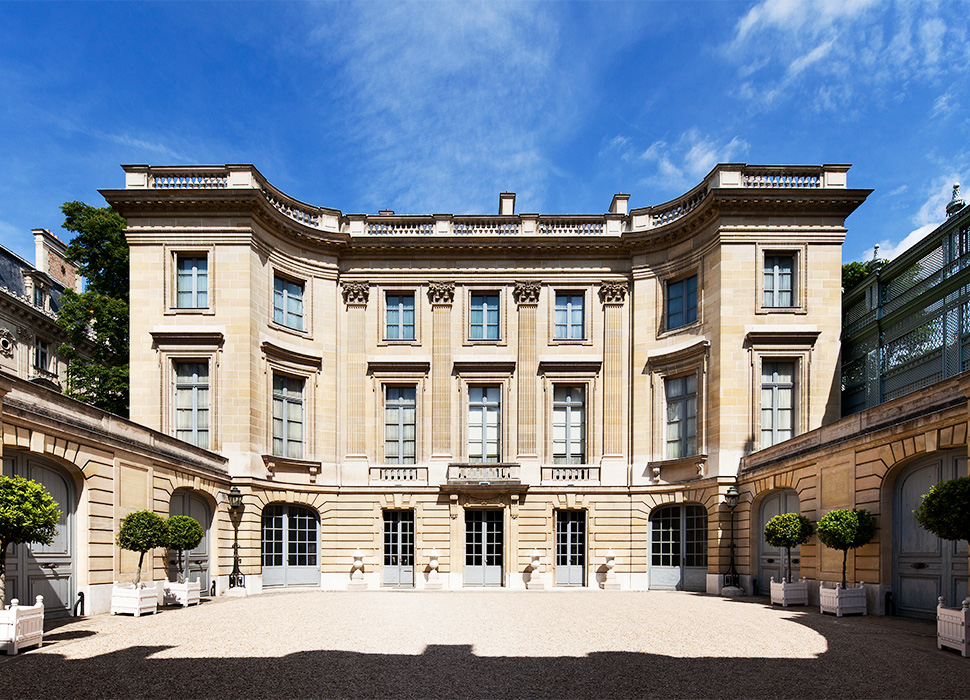 Paris is home to 130 museums, so it would be impossible (and possibly ill-advised) to attempt to see them all in one fell swoop. That said, be sure to make space in your itinerary to take in at least one of the big hitters. From shooting Mona Lisa an unrequited smile at the Louvre to meandering among more than 300 Impressionist paintings at the comparatively diminutive Musée Marmottan Monet, there’s something for culture hounds of all stripes here. Consider traveling off the beaten track to enjoy decorative arts (specifically French ones from the late 18th century) at the Musée Nissim de Camondo, a former private mansion that also boasts a phenomenal restaurant. Former market turned gallery Halle Saint-Pierre, meanwhile, offers a more rustic folk and naïve-art focus.

4. Get heady on natural wine near the Canal Saint-Martin 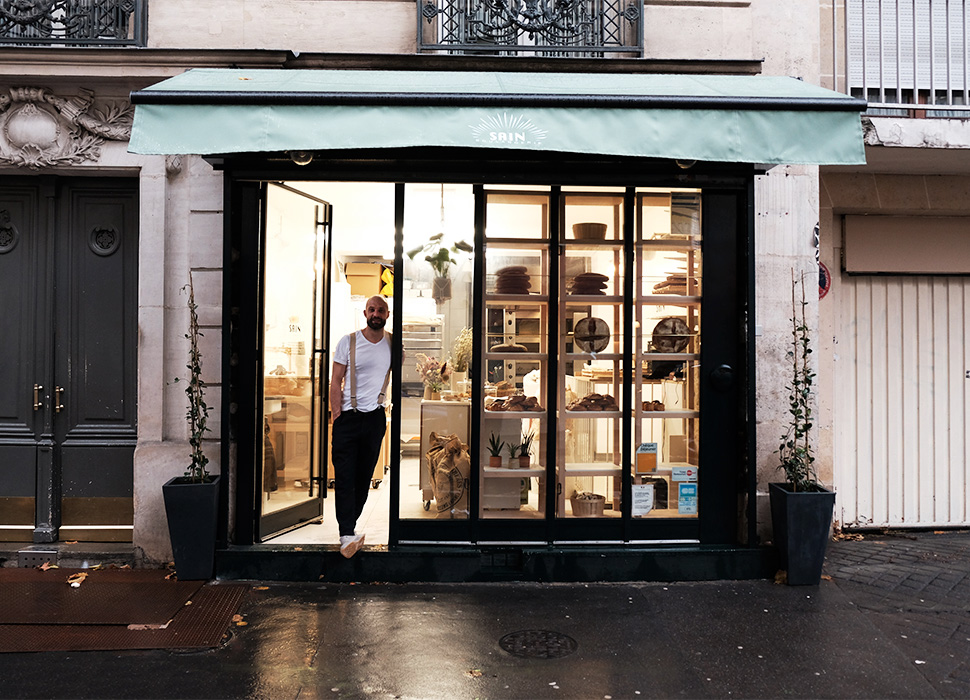 Soak up your sulphite-free wine with bread from Sain

Paris has wholeheartedly embraced the world of natural wine, which does away with synthetics and industrial methods for fresh, funky cuvées and an embrace of what can only be described as "farmy flavours" (it's delicious, honest). Take an initial snifter of the stuff at Bar Martin, which opens at 4pm and boasts a wide sidewalk terrace. Then venture east to Goguette or north to Le Verre Volé for a glass accompanied by small plates. You can also grab wine to go from Le Verre Volé’s bottle shop in the 11th; then a makeshift meal (say, bread from organic bakery Sain with cheese from La Crèmerie) to picnic and people-watch on the banks of the picturesque Canal Saint-Martin.

5. Check out floating bars and bookshops on the Canal de l'Ourcq 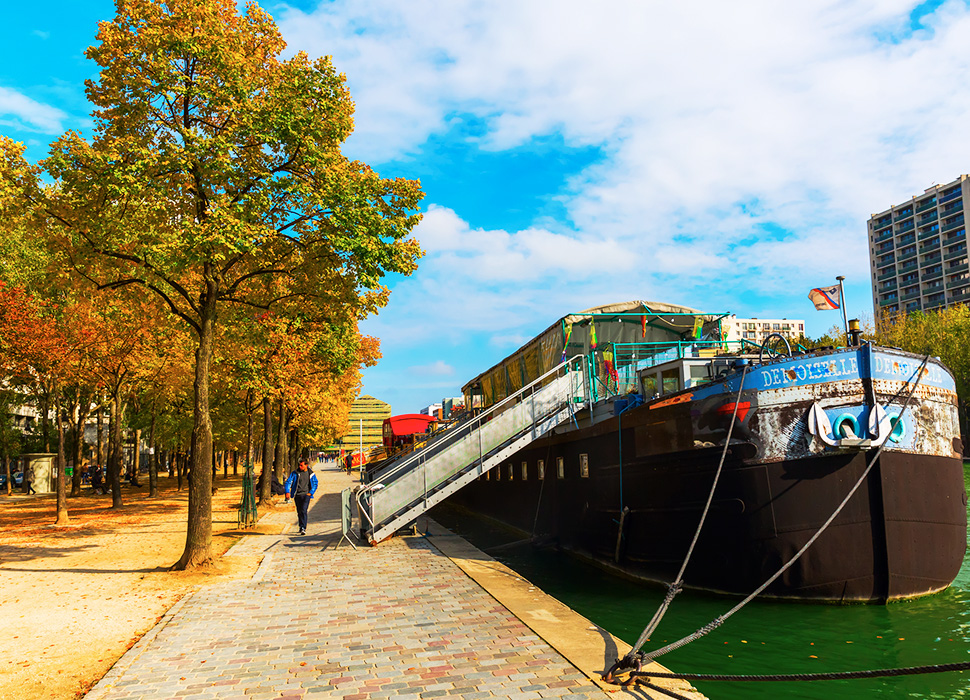 Continuing past the Canal Saint-Martin will bring you to the Canal de l’Ourcq, known for its bobbing péniches. Many of these houseboats have been converted into cultural spaces, such as Le Barboteur, an ephemeral hub and excellent beer-bar that follows an identical journey along Paris’s canals each week for pop-up concerts and more. Floating bookshop L’Eau et les Rêves, meanwhile, carries a lush stock of botanical books and hosts frequent pop-up plant sales. If you’re feeling a bit seasick, stop off at the stationary Pavillon des Canaux, a café decorated like a house (complete with a bathtub you can work in), or grab a beer at Paname Brewery with a table overlooking the water. Make sure to keep a beady eye out for the street art murals along the Quai de Loire. 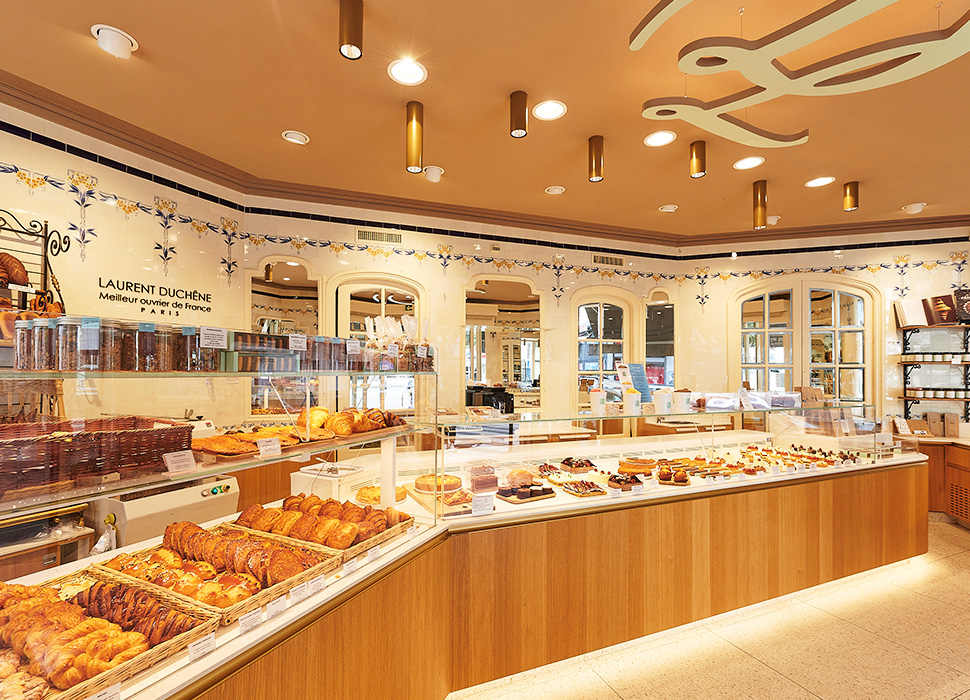 You can’t visit Paris without testing out some of its fragrant, wheat-intolerant-baiting boulangeries, which you’ll find on every street corner. But not all bakeries are created alike – and bread-heads should make sure to look for an emblem indicating whether or not an establishment has placed in the city’s annual 'Best Baguette' or 'Best Croissant' contests to ensure you’re getting the meilleur. That, or just seek out our favourites: Laurent Duchêne in the 15th, Maison M’Seddi in the 13th, Tout Autour du Pain in the 3rd, or Cyril Lignac in the 11th. Any and all will more than fulfill your craving for the perfect buttery breakfast pastry (that's a croissant, if you were really wondering).

7. Delve into the weird and wonderful history of the Latin Quarter 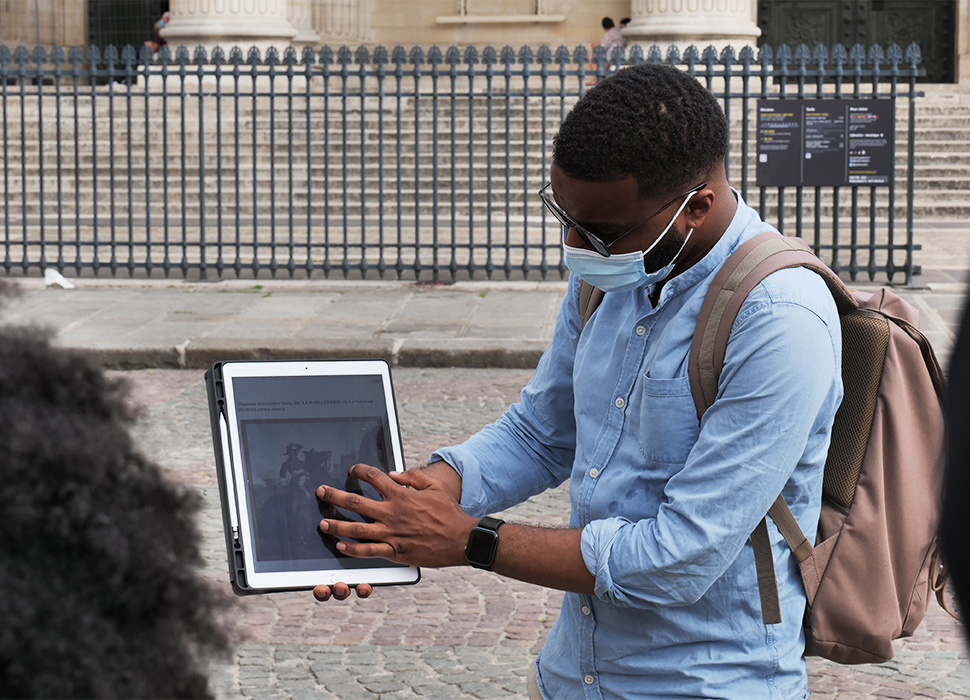 The Latin Quarter has long been the heart of Paris, and a guided amble around the neighbourhood will help you uncover its secrets. Writer Anna Polonyi's Queer Women of the Left Bank walking tour explores the lives of thinkers, movers, and shakers from Sylvia Beach to Gertrude Stein; and Kévi Donat's Paris Noir tour reveals how black transplants and Parisians changed the city forever. Elsewhere, Localers’ Hemingway & Friends foray explores everything you need to know about the Lost Generation, while Paris Muse focuses on the medieval Notre Dame and Cluny museum. Whatever slant you take, discovering this neighborhood in a new light is an illuminating must. 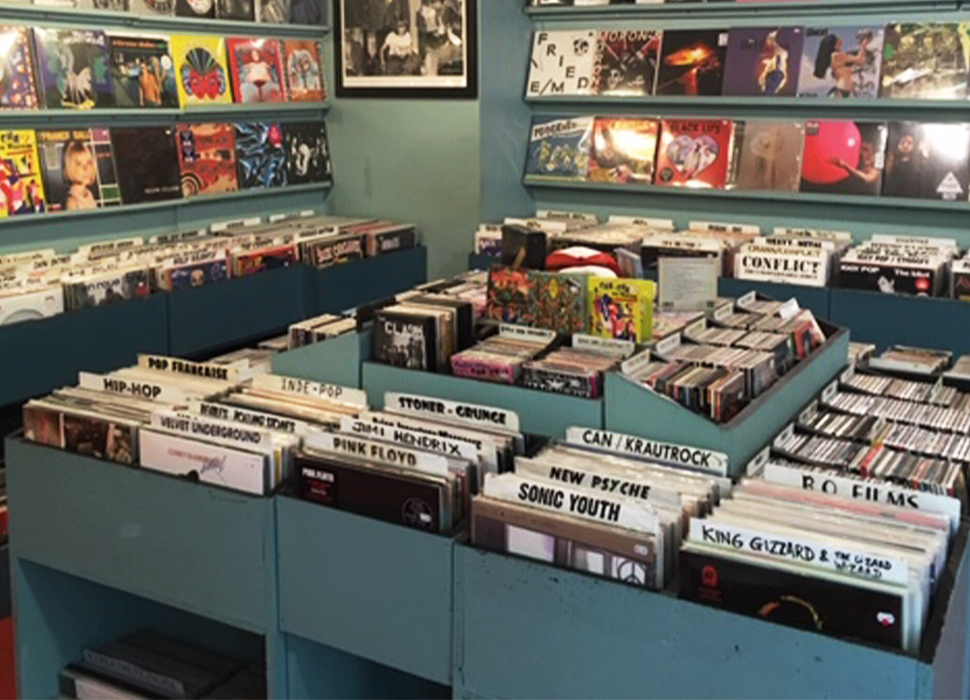 Racks of the raging stuff at Born Bad

These days, the area named for the long-gone prison is revolutionary in a different way. A subculture of music and art reigns now, and vinyl-lovers will love crate-digging at shops like Patate, which specializes in reggae, or Born Bad, known for its selection of punk and garage rock. Elsewhere, Syncrophone is a no-brainer for fans of house and techno, while Vinyl Office offers loads of variety in second-hand vinyl with a special focus on black artists. Art lovers should be sure to check out Dorothy’s Gallery, a contemporary space on the diminutive Rue Keller offering regular exhibits and artists’ evenings.

10. Seek out the perfect vintage finds in the Marais 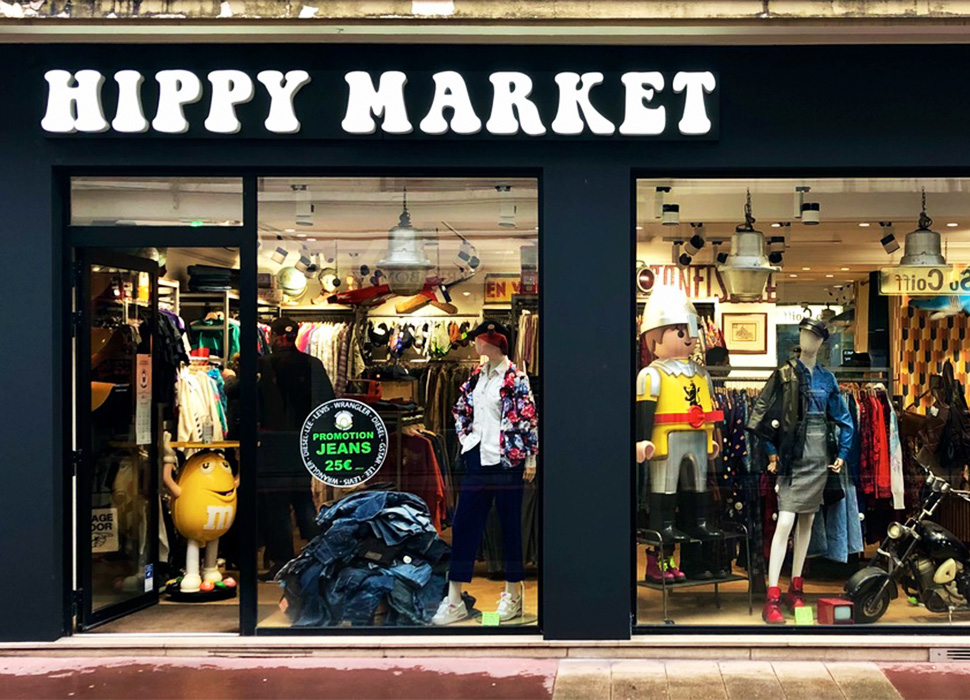 Layer up without breaking the bank at Hippy Market

Once Paris's Jewish Quarter, the Marais has long been famed for phenomenal falafel, a great gay scene and thrumming nightlife – but it’s also marvellous for vintage threads. Merely ambling the district's second-hand clothes stores could make a day in itself. Vintage Désir is located in a former hair salon (the old sign is still out front) and boasts a fine blend of men’s and women’s clothes. Hippy Market’s two Marais shops are eco-focused and offer tons of choices inspired by the Flower Power period. Kilo Shop makes good on the promise of its name, selling discount used clothes by the kilo – dig, and you may stumble upon some treasures. And for those who prefer a more curated experience, Mamz’Elle Swing is a retro boutique boasting finds focused on the period from the 1930s through the 70s. In short, a grungy haven in the couture capital of the world.