Where to eat socca in Nice: where to sample the city's favourite snack

Socca is the traditional niçois snack with 21st-century appeal: a vegan- and vegetarian-friendly, gluten-free chickpea-flour pancake that happens to be pretty tasty too. It’s best served golden and crispy on the outside (but not all the way through), and washed down with a chilled glass of Provence rosé. These are the seven addresses for socca in Nice that you need to know.

What more? Check out our complete guide to Nice 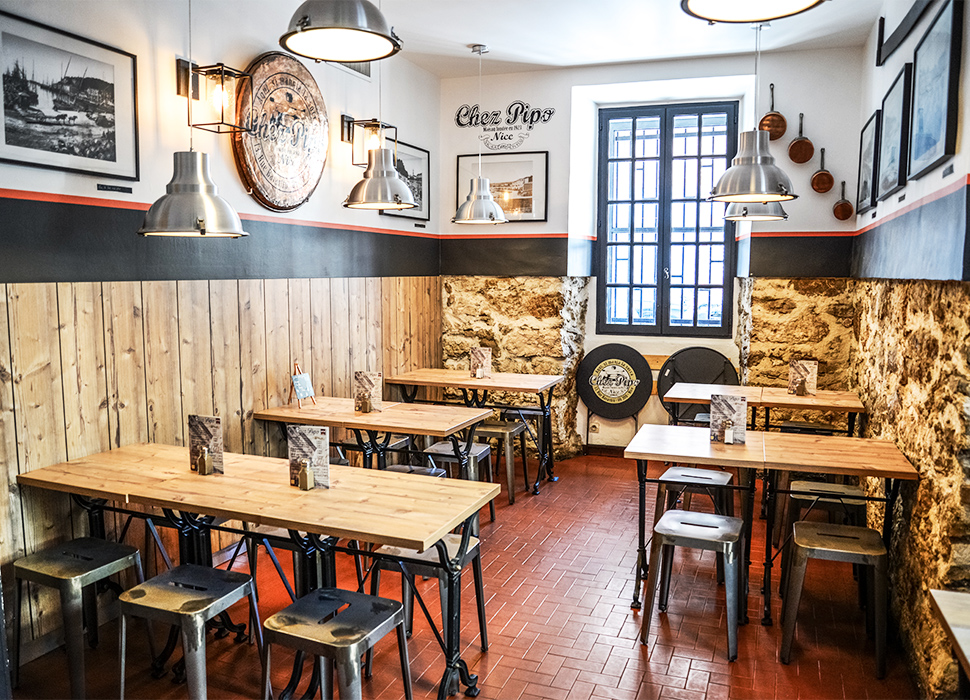 Chez Pipo pips it for best socca in the city / Image: Steeve Bernardo

If there were such a thing as celebrity socca chefs, it would be Steeve Bernardo and his team at Chez Pipo – they’ve cooked the speciality for Alain Ducasse and have a venue at Nice Côte d’Azur airport. Of course, being known as the best address for socca in the city means there’s always a hungry crowd queuing up outside, so patience is the key. The location – just back from Nice port – and the recipe hasn’t changed since the restaurant first opened its doors in 1923.

Of course, if you don’t fancy waiting at Chez Pipo, you could pop around the corner to Socca d’Or – for many locals, this small restaurant run by husband and wife duo Frédéric and Valerie on the very trendy rue Bonaparte is their first choice for a plate of freshly baked socca anyway. Bearing the seal of an authentic niçois dining establishment, other dishes to try here include the lou pan bagnat maison (essentially a salad niçoise in a bread roll) and pissaladière (a type of local onion-topped pizza). 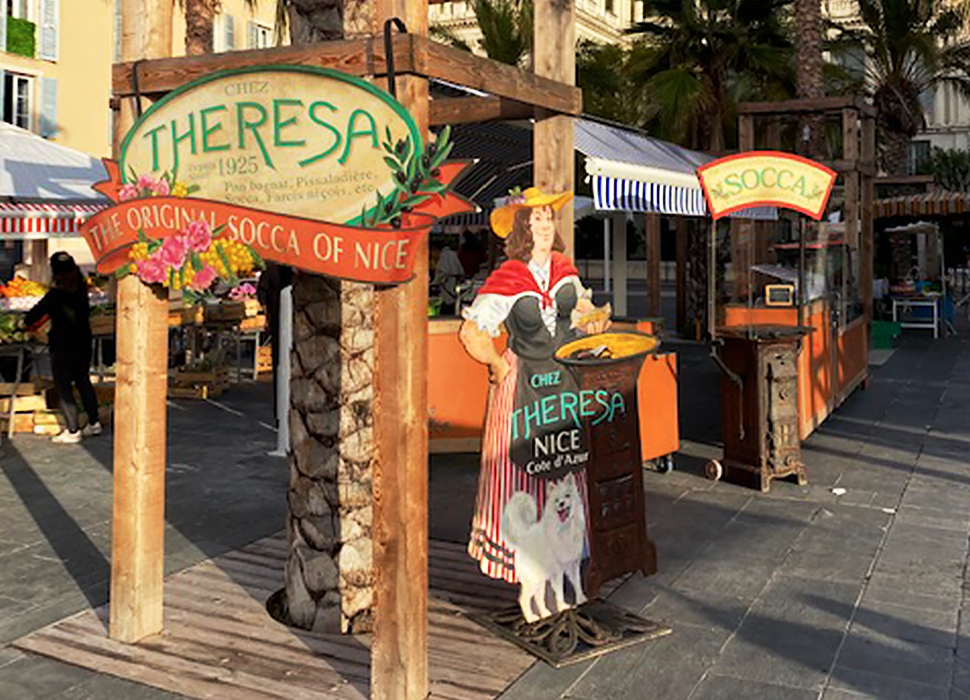 Chez Theresa is another of the city’s socca institutions on the cusp of celebrating 100 years in business (it opened in 1925). A motorised bicycle – instantly recognisable for the giant insulated compartment attached to the front – delivers oven-fresh trays of socca to its stall on the Cours Saleya markets in Vieux Nice every Tuesday to Sunday morning. You can also dine in (and watch this traditional dish being made) at its no-frills restaurant a few hundred metres away on rue Droite.

This dinky little dining room plonked on the tramline on avenue Borriglione is a top spot for a snack after a busy morning of fresh produce shopping at the nearby Liberation markets. As the name suggests, socca is the main attraction, but as the sunny footpath seating area fills up, you’ll notice a mainly local crowd tucking into generously sized sharing plates and tasty pizzas, too. 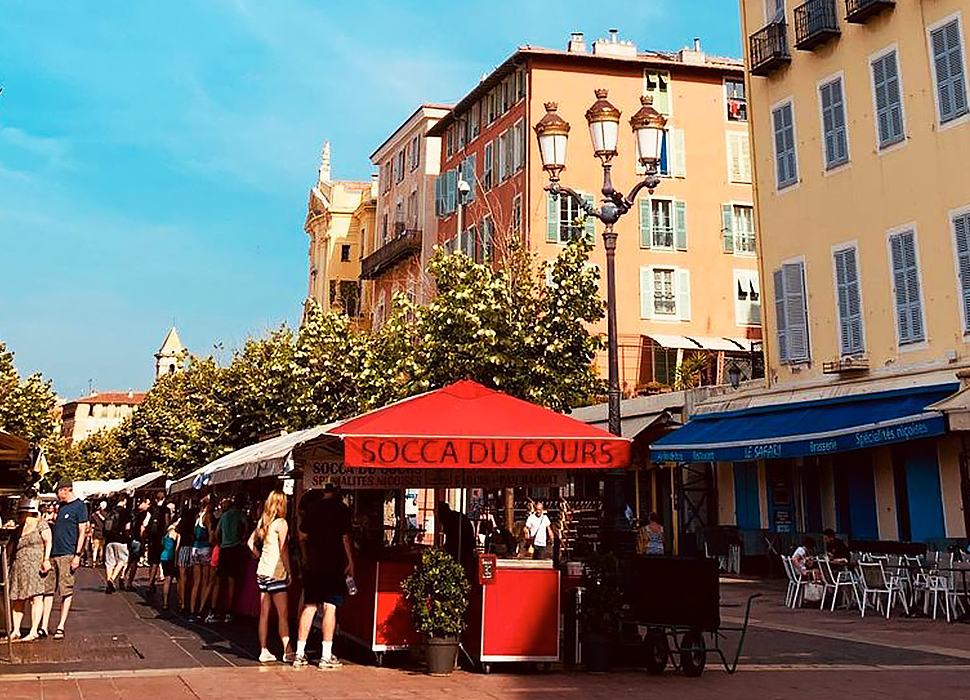 Get your shopping and your socca done in one / Image: @soccaducours

You’ll spot the queue for Socca du Cours from a distance – this popular food stand at the eastern end of the Cours Saleya markets serves hot portions of socca as well as other typical niçois dishes like beignets de fleurs de courgettes (battered courgette flowers) and capouns (stuffed cabbage). It’s purely a takeaway affair, although the beach across the road is a pretty nice spot to post up with your pancake.

No matter the season, this casual restaurant just off Place Garibaldi in Vieux Nice is guaranteed to have a queue of people patiently waiting their turn to order an assortment of over-the-counter tasting dishes to share with friends and family – from socca to other small plates such as sardine fritters and petits farcis niçois (stuffed vegetables). Order some drinks to go with your snack and you’ll earn the right to sit at a table on the busy outdoor terrace. 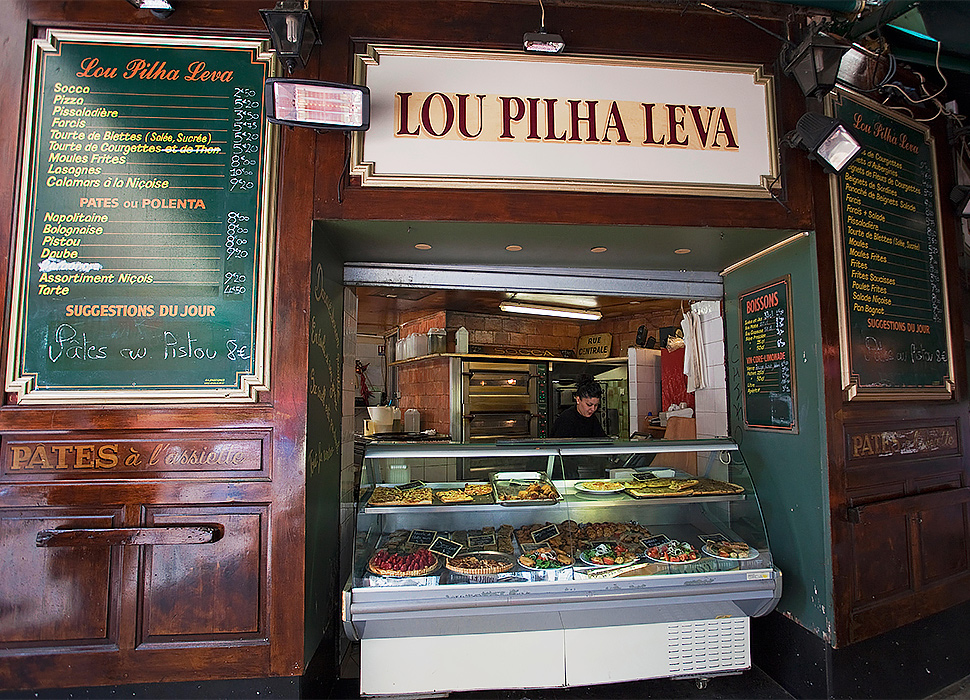 Countless new friendships have been struck up across the big communal wooden benches outside Lou Pilha Leva, another cheap and cheerful dining spot in the heart of Vieux Nice. The service is brisk and the queue moves quickly so there’s always a fresh batch of hot socca coming out of the wood-fired oven, ready to be portioned up and enjoyed with a generous dash of salt and pepper.

The best things to do in Nice