Drilling down into these carnival floats / Image: James Cannon

The carnival is the annual highlight in Nice's cultural calendar. But what does it take to build those massive parade floats? We went behind the scenes to find out

Drilling down into these carnival floats / Image: James Cannon

It’s a warm December afternoon, the kind that’s made the French Riviera such a popular winter spot for everyone from British monarchs to North American novelists. Visitors have long gravitated towards the Promenade des Anglais, the city’s sweeping waterfront boulevard, as well as the photogenic alleyways of Vieux Nice, the Old Town. However, I’m fairly confident that the likes of Queen Victoria and F Scott Fitzgerald never saw the side of Nice I’m witnessing today. 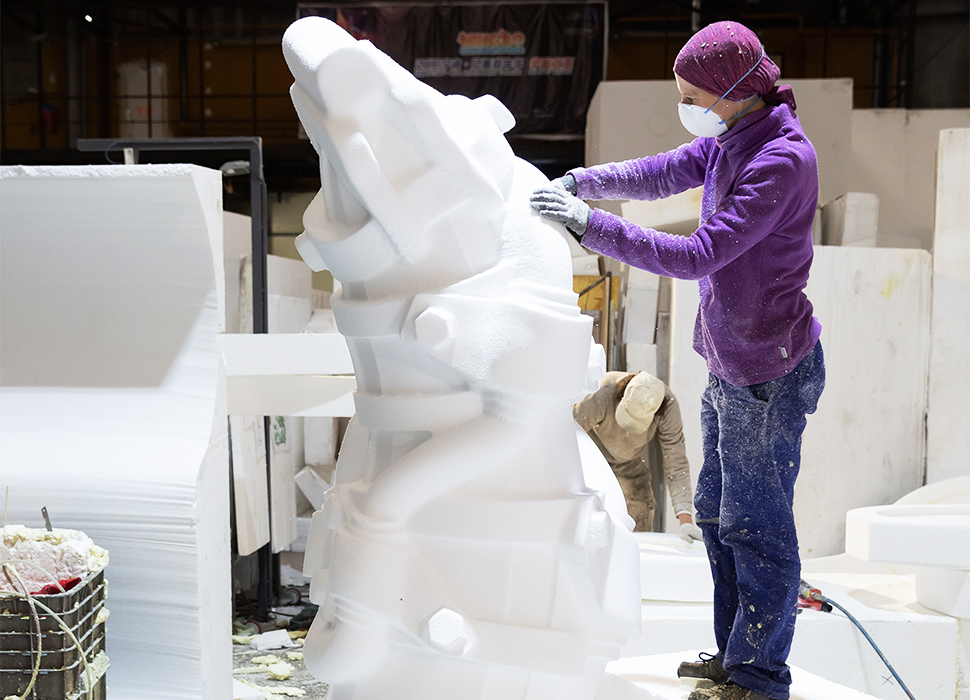 Only four families of carnavaliers are entrusted to build floats / Image: James Cannon

Every February, this Cote d’Azur city hosts a legendary carnival, a fortnight of parades and perfumed flower battles. Kids in fancy dress watch the larger-than-life floats – which are riots of colour by day, spectacularly illuminated by night – while confetti rains down. Preparations for this epic celebration require a lot of space, something these picturesque inner-city neighbourhoods lack. That’s what’s brought me to the quarter of Saint-Roch at Nice’s eastern fringe where, across the road from a freight station, I’m about to step inside an enormous hangar that I never knew existed.

Had I visited a week earlier, Halle Spada would have been quiet. Today, however, preparations for the carnival are in full swing. I’m struggling to hear over the din of machinery. The lights are bright, shining down on half a dozen or so people as they carefully carve a façade out of an oversized polystyrene block. I sidestep a pile of metal rods, stacked so high I’m worried I’ll trigger an avalanche. Welded together, they will form the skeletons around which the floats of the carnival parades will take shape. 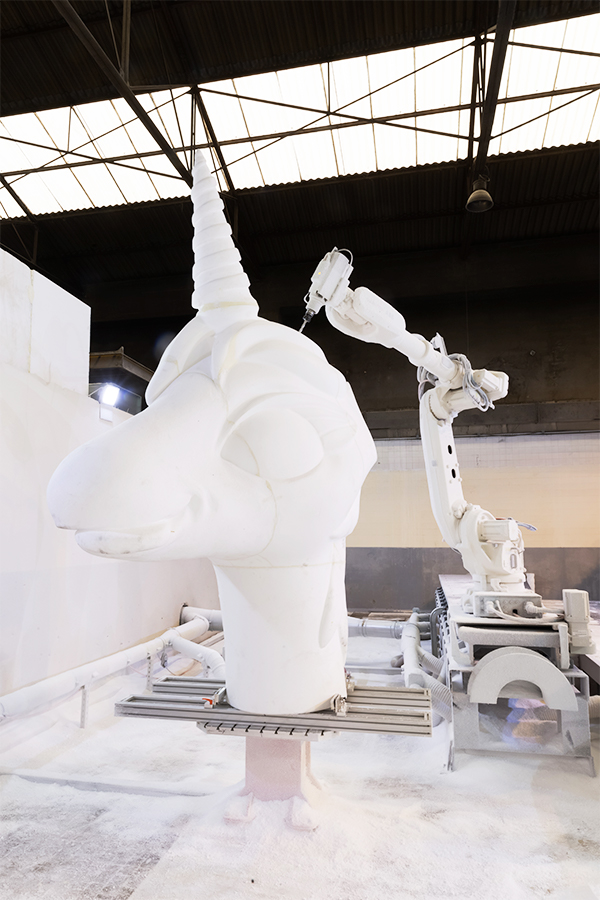 Wildly imaginative and connected by a theme, each float takes close to three months to prepare. Along with the grosses têtes (giant heads) that march alongside them, they are as irreverent as they are flamboyant. This satirical edge keeps the party relevant centuries after it was first held. Carnival traces its roots back to medieval pre-Lenten celebrations, but when it comes to floats à la niçois, nothing is sacred, as last year’s cosy coupling of Vladimir Putin cradling a beaming Gérard Depardieu in drag demonstrated.

Four families of carnavaliers, or float builders, are entrusted with their construction, and Pierre Povigna, my host for the afternoon, is considered the doyen. Like the three generations that came before him, carnival is in his blood. He made his first float when he was just 12 years old. “It was a little cart with Scrooge McDuck on top,” he says. “I even won a prize.” 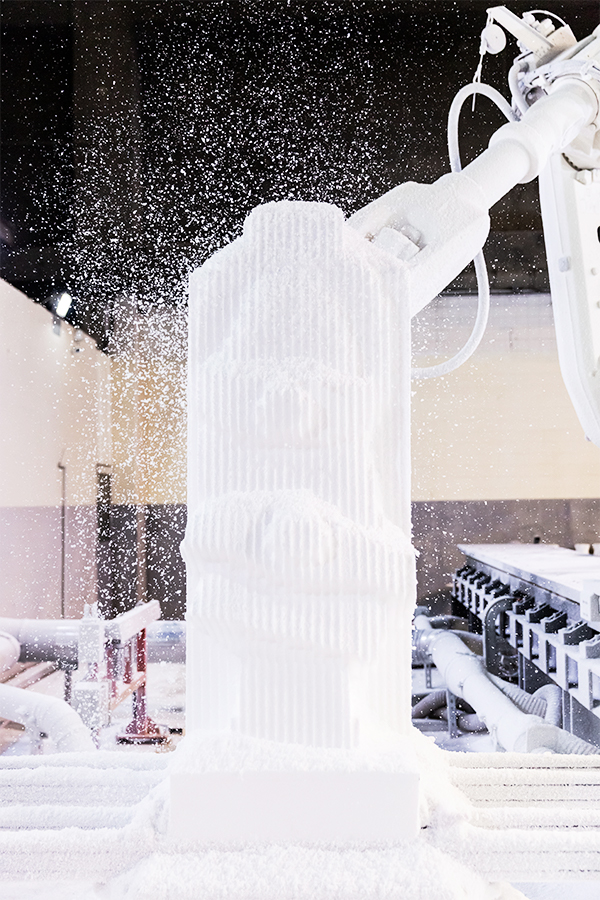 Being a carnavalier, he tells me, is being an artist – and polystyrene is his canvas. As the floats have evolved (the head of the traditional carnival king is now 6m high when it was once just 1.8m), materials like clay and plaster mould have been swapped for the convenience of polymer. Povigna now spends four months a year working on his creations. It’s a craft historically passed down from father to son, although the legacy that Pierre is creating for his daughter and two nephews (generation five) will be vastly different, if the high-tech contraption I have just come face-to-face with is anything to go by.

“We call it a robot,” says Povigna, “but most people would probably call it a printer.” Discovered thanks to some smart research, this seven-axis milling robot is more commonly used to chisel marble from the Tuscan quarries of Carrara. “I thought, if it can sculpt something as hard as marble, the same tools could surely work on a softer material like polystyrene,” he says. His €350,000 investment arrived just in time for last year’s carnival and he’s the only carnavalier to introduce tech in such a big way. 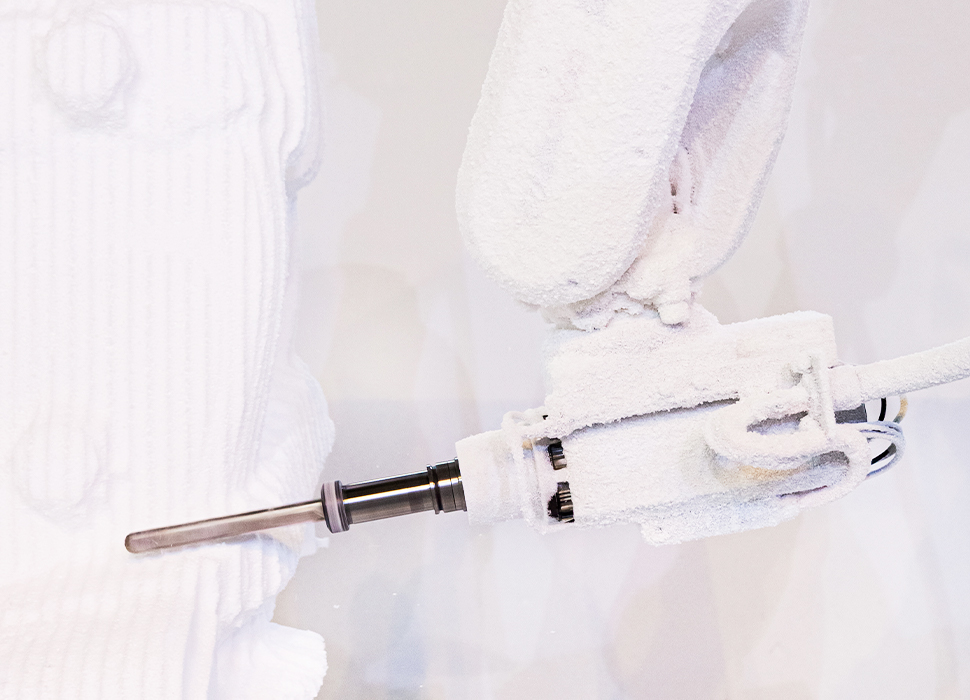 Each little adjustment is possible to program before the robot even starts work / Image: James Cannon

As I watch its giant arm working in a steady, repetitive fashion, I can see why Povigna was prepared to outlay such a large sum of money. Not only does he save on that most precious commodity – time – but robots don’t need toilet breaks or call in sick, do they? Consistency and precision are key here. “With the robot, if a head needs to measure 2.23m, it will measure 2.23m. Whereas, when we work by hand, sometimes it will end up centimetres out,” he says. “What is really interesting is that we can see the final result in 3D on a screen before we even start,” he continues. “We can play around with each creation: open a mouth here, make a smile wider there. These are things that were not possible before.” 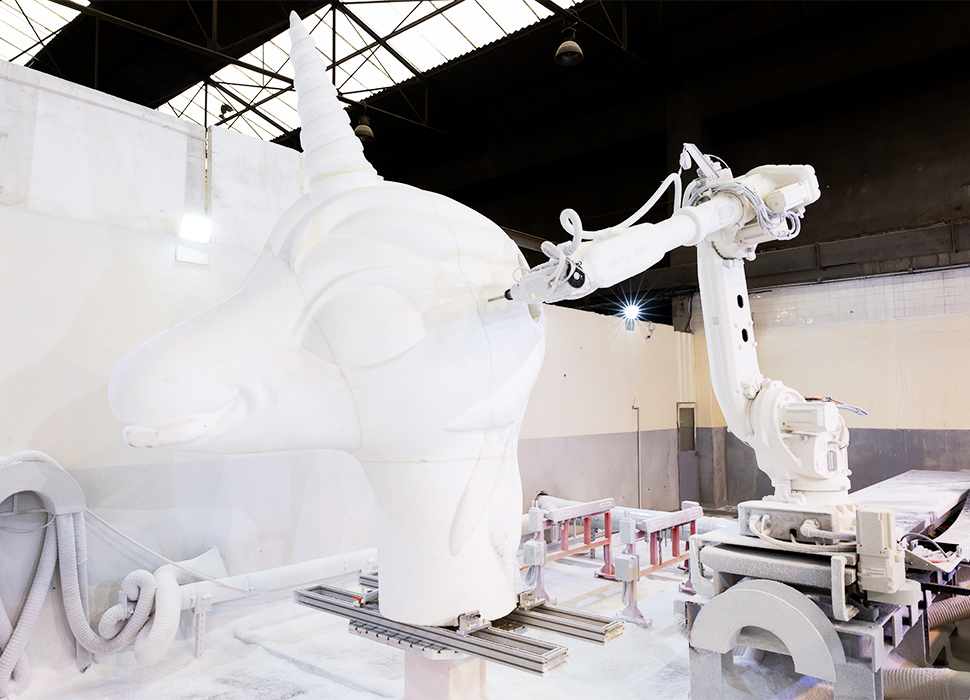 In front of me, the wings of a Pegasus-like unicorn are starting to take shape. Judging by the blueprint of this year’s floats taped to the wall, details like Vogue editor-in-chief Anna Wintour’s signature bob and the late Karl Lagerfeld’s trademark sunglasses are to follow.

Automation is rendering humans obsolete in many workplaces, but the robots aren’t muscling out the people here just yet. Povigna has added to his team, employing two specialist animators who are responsible for inputting each design into 3D modelling software. And, once the robot has finished sculpting a piece, the final assembly of the float still relies on a human touch. I can’t help wondering what the other carnavalier families make of Povigna’s fancy machine. I ask if they are watching on with curiosity – and maybe with just a dash of envy? “Yes, I think they are,” he responds, “but this is the evolution of carnival, it’s the future.”