A painterly view from the Promenade des Anglais / Image: Getty

The best things to do in Nice

With pretty promenades, sweetshop structures, Gallic wine hubs and cutting-edge culture, Nice more than deserves its name. Here's our pick of the sights and sites

A painterly view from the Promenade des Anglais / Image: Getty 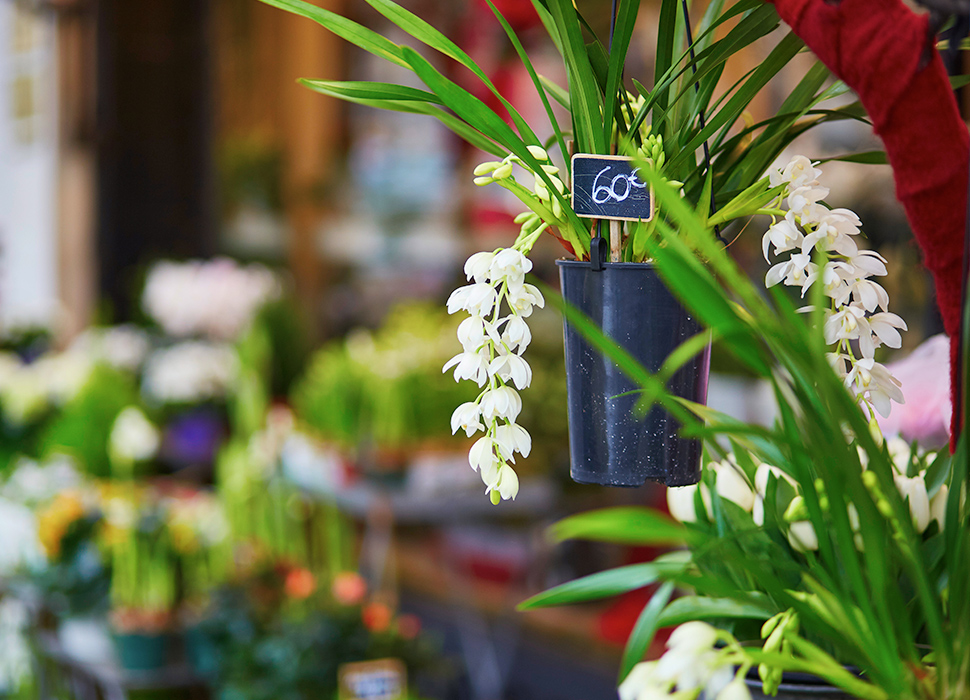 Ever since 1897 this picture-perfect market with its colourful awnings and jovial vendors has been flogging fine flowers to the elegant denizens of Nice. Star billing quite rightly goes to the lurid fuchsias, nodding dahlias and technicolour geraniums. But don’t forget to check out the very respectable food offering – there's everything from standard greengrocer bits and bobs to posh confectionery and fancy-pants modern street food. Even if you don’t buy anything, the whole kaboodle is an unforgettable feast for the senses, with some of the best people-watching opportunities in town. 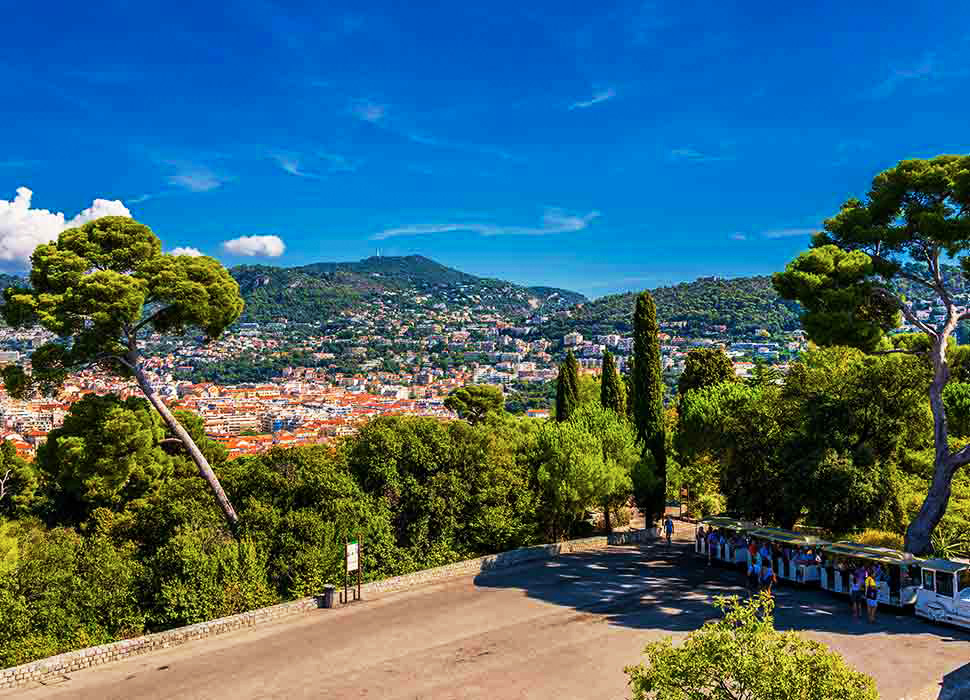 Gaze out over a verdant kingdom (without a castle) / Image: Alamy

Don’t let the name fool you – alas, there’s no castle here. Grumpy old Louis XIV destroyed the medieval citadel which gave the park its name back in 1706. Still, it’s a lovely spot, with a dreamy mixture of open greenery and shady foliage. Best of all are its views: over the city’s distinctive red-tiled rooftops, out over the port, and inland to deepest rural Provence with an Alpine backdrop on a clear day. All that, and a very agreeable, 18th-century artificial waterfall, should make you feel like king of the castle anyway. 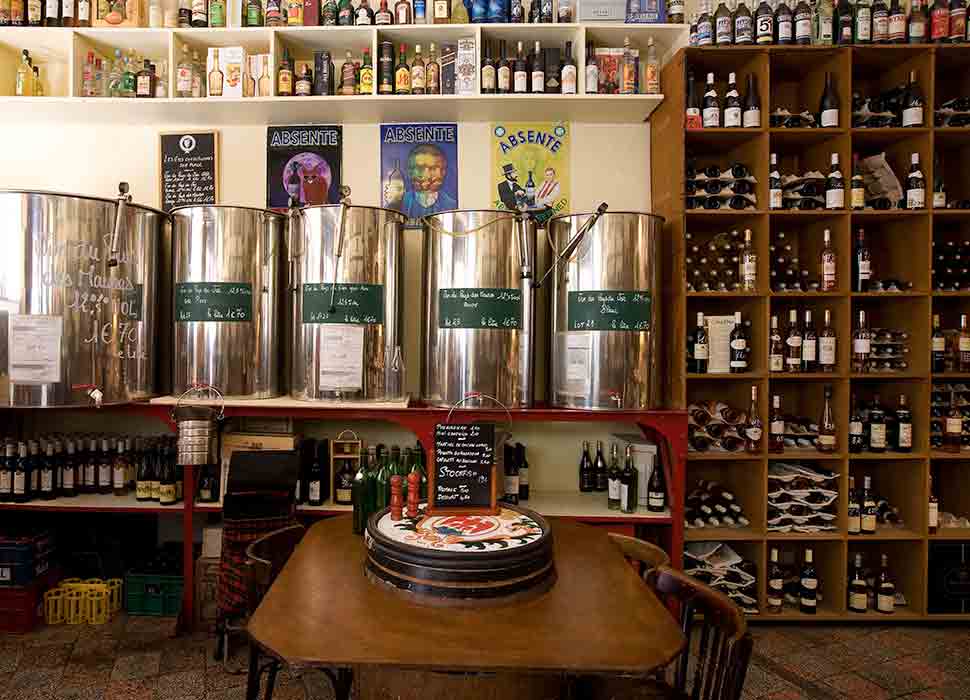 For the full-blooded French drinking experience, guzzle up the ruby-red goods at Cave de la Tour. A family-run joint since way back in 1947, the vibe is communal and light-hearted, and you’re very likely to be plonked on a table with a happy cluster of non English-speaking locals. What you might lack in common vocab, the choice vino will more than make up for, with top-notch nibbles – stuffed capouns, polenta stew and other hearty bits – doled out cheerfully by the present generation of owners. Formidable.

4. Muse on a Matisse in his very own museum 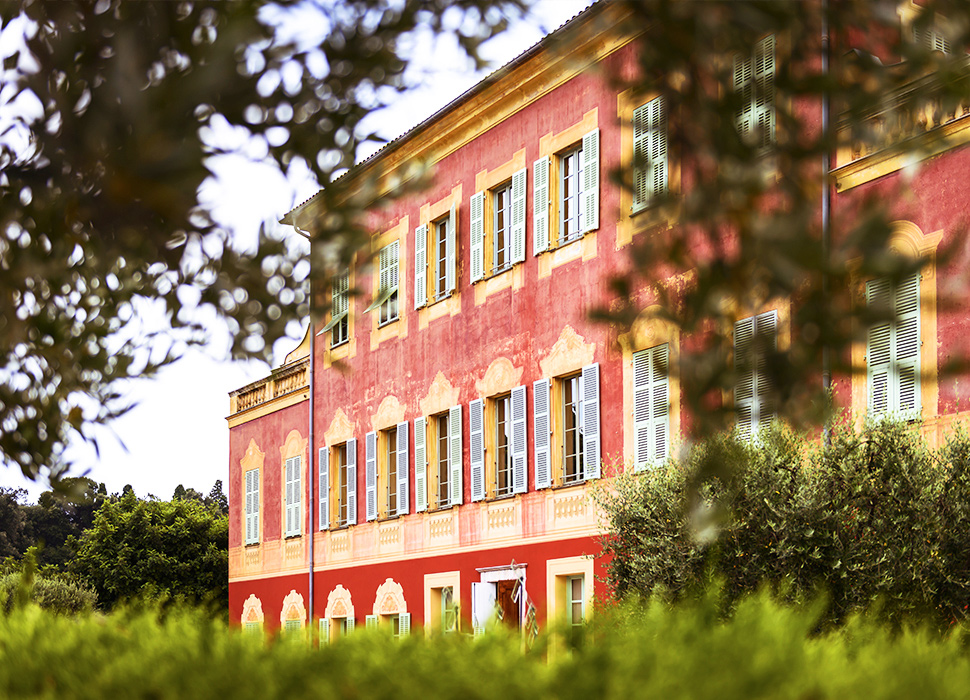 A striking exterior at the Musée Matisse /Image: Adobe Stock

The extraordinarily influential, early 20th-century artist Henri Matisse lived in Nice for almost 40 years, so it’s only fitting that the city decided to honour him with a dedicated gallery. Musée Matisse offers an intriguing overview of his life and work, with select paintings, drawings, bronze sculptures and the cut-out collages (or ‘decoupage’) he turned to in later years when bed-bound due to painful cancer surgery. A truly larger-than-life character, remembered here in vivid living colour. 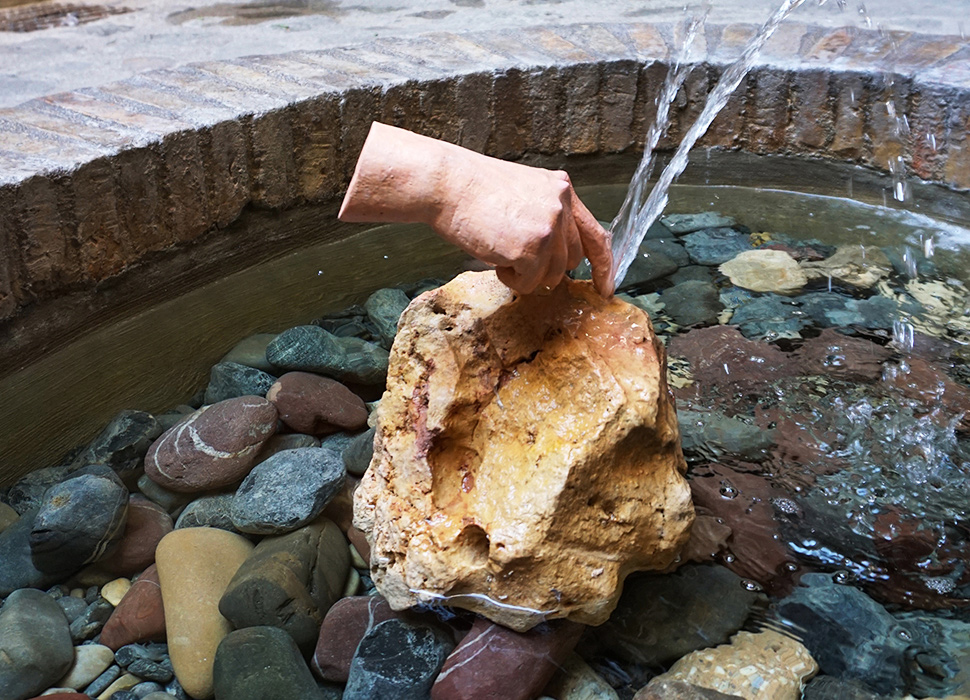 A nice, terrifying bit of modern art at Le 109 / Image: The Fountain HI-HAN

It’s pretty mad to think that Le 109 – a sprawling and busy multimedia arts venue and event space in Nice’s Cimiez district – was once a grisly abattoir. Well, until 1988 anyway, when it closed and lay derelict for 20 years. These days it’s a thriving community hub, with around 30 artistic studios on the site, as well as platforms for dancers, singers and circus performers. You never know what might be on, and visitors can expect anything from open mic sessions or to live orchestras, to mind-bending installations. A mighty, meaty cultural stew. 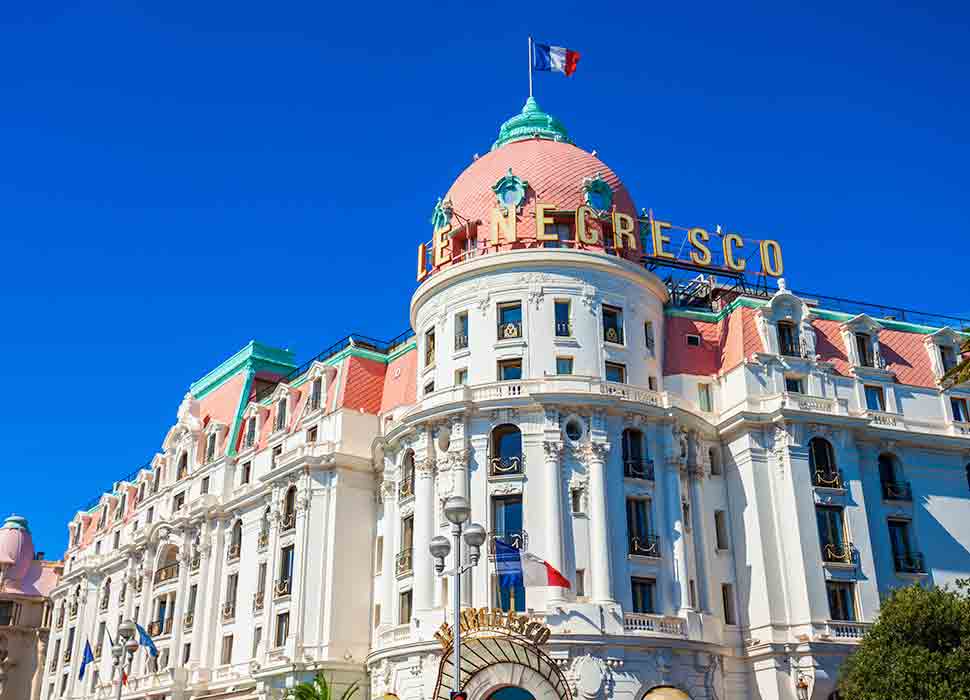 The pastel-pink-domed Negresco hotel looms over the Promenade des Anglais like some implausible relic from a Wes Anderson flick, filled with old-school bellhops and rococo furnishings. Celebrities from Salvador Dalí to Elton John – who featured Le Negresco in his video for ‘I’m Still Standing’ – have kipped here, but you needn’t fork out for a room to get the full experience. Simply dress up a bit and order a ‘Royal Negresco’ of kirsch, raspberry syrup and champagne at the bar. Then you’ll really be rubbing shoulders with the pinnacle of Belle Époque glamour. 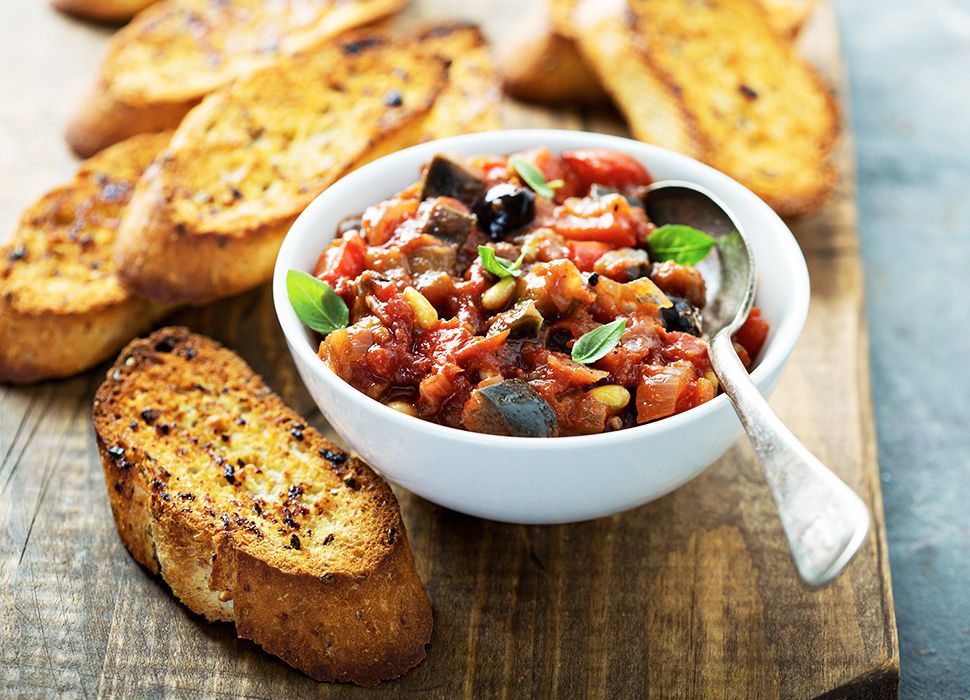 Looking for a definitive Provençal plateful? This bijou family-run joint just by the station is a must for any serious foodie traveller. With its profusion of red-and-white checked tablecloths and no-nonsense classic menus – think gnocchis gorgonzola, tripes niçoises, caponata d'aubergines et al – Voyageur Nissart is also justly famous for its fair pricing. Set menus for €15.90 (service included) aren’t to be sniffed at, especially with sautéed lamb and a juicy lemon tart whipped up in front of you. It’s le real deal.

8. Stroll along the Promenade des Anglais 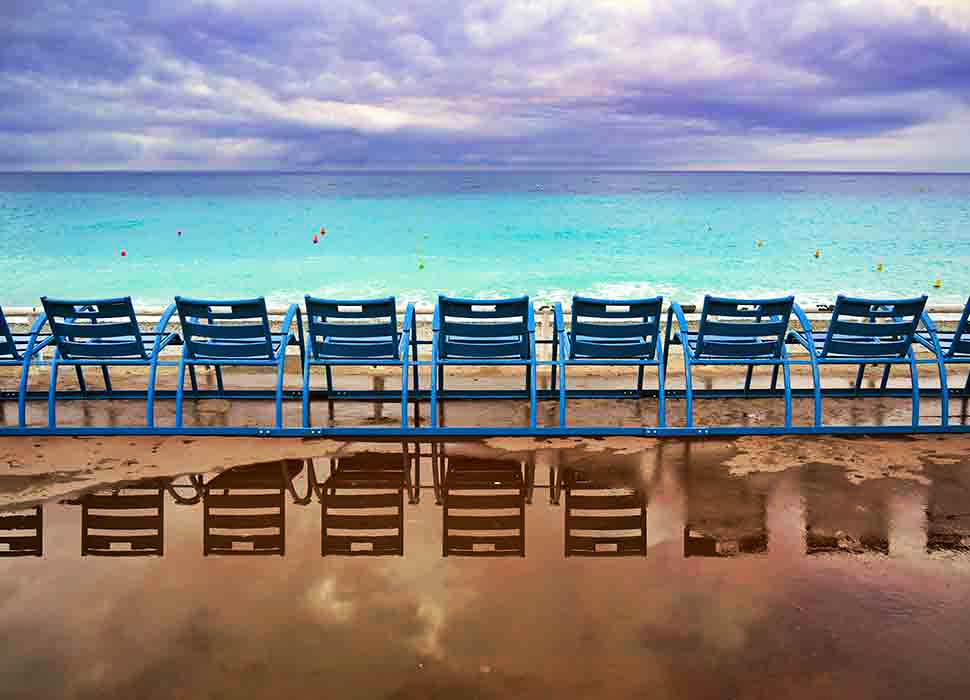 Back in the 18th century, well-heeled English types made regular summer sojourns to Nice. But although the Mediterranean coast was all very well, they decided, it was nothing like the seaside at home. So they had a classic Anglophile promenade constructed, as you do. Today ‘La Prom’ is a haven for cyclists, skaters and romantic strollers. In February, the Nice Carnival provides wall-to-wall colour, but the year-round bar and restaurant scene is always lively. It's just like the UK, but with actually clear skies, and actually warm seas.

9. Encounter the divine at the Russian Cathedral 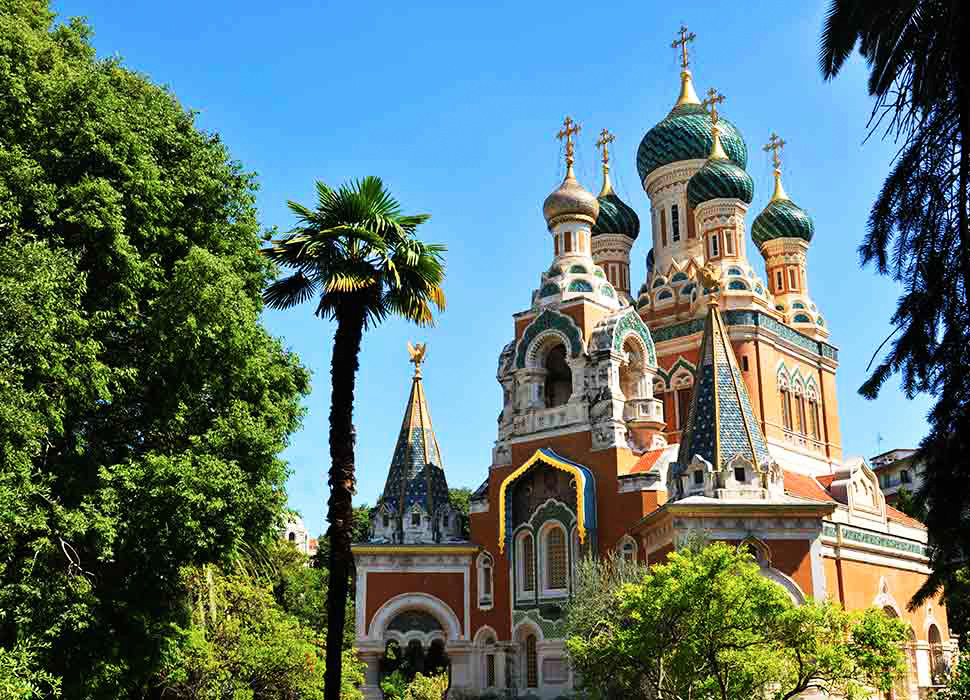 It wasn’t only English blue-bloods who found Nice irresistible. Wealthy and aristocratic Russians also flocked here in summertime, and before long this ravishing Orthodox church was built to accommodate their spiritual requirements. The visual feast of onion-shaped domes, flecked with iridescent greens and luxurious gold trim on the outside, is only half the story. Its cruciform interior is dripping with frescoes and was redecorated in 2015 under the orders – and thanks to the chequebook – of the Kremlin itself. Exotic and holy, St Nicholas lends real elan to the Nice skyline.

10. Get into the groove at Le Shapko

If you like your live entertainment served with a fat dollop of funk and soul (and who doesn't?) then Le Shapko, on the indecently pretty Rue Rossetti, may well be the late-night bar you’ve been searching for your entire life. Set over two floors – ground-level and a discreet balcony – it’s a good shout to get there nice and early for happy hour (7pm–9pm) if only to bag a decent table. Music kicks off at 10pm, with a much-loved freeform jam session making it good and weird from 1am. Welcome to jazz club – Nice.