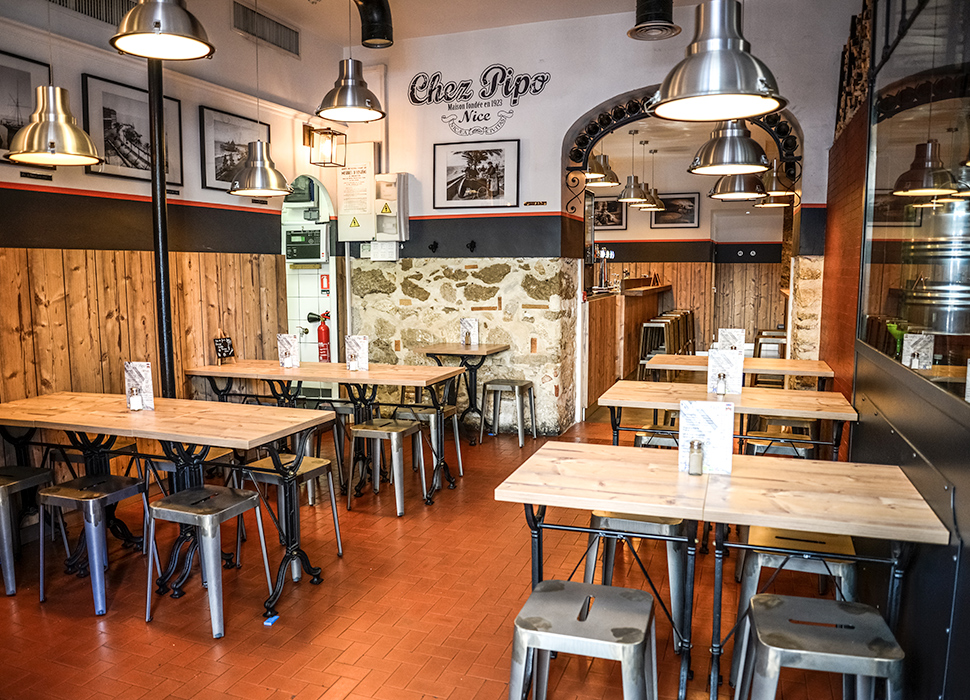 There’s more than socca on the menu here, but it’s this classic Niçois street food snack that people travel from far and wide to eat at Chez Pipo. Since 1923 this casual canteen in Nice port has been serving up plates of the chickpea-flour pancake (and other dishes such as pizza slices and pissaladière, the local take on pizza), long before the streets around it started filling up with trendy boutiques and restaurants. Unlike some of its newer neighbours, a meal here won’t break the bank – a portion of socca costs €2.90 – so, unsurprisingly, tables fill up early.

In the warren-like streets of Vieux Nice, the city’s pedestrianised old town, the Acchiardo family have spent four generations (and nearly one hundred years) feeding hungry locals and tourists alike with traditional favourites such as petits farcis nicois (stuffed vegetables), salade niçoise and merda de can (green gnocchi made using Swiss chard). It feels like a familiar spot as soon as you walk in – and it is, in fact, very familiar to many: the restaurant is so popular, it's closed Saturdays, Sundays and the whole of August. 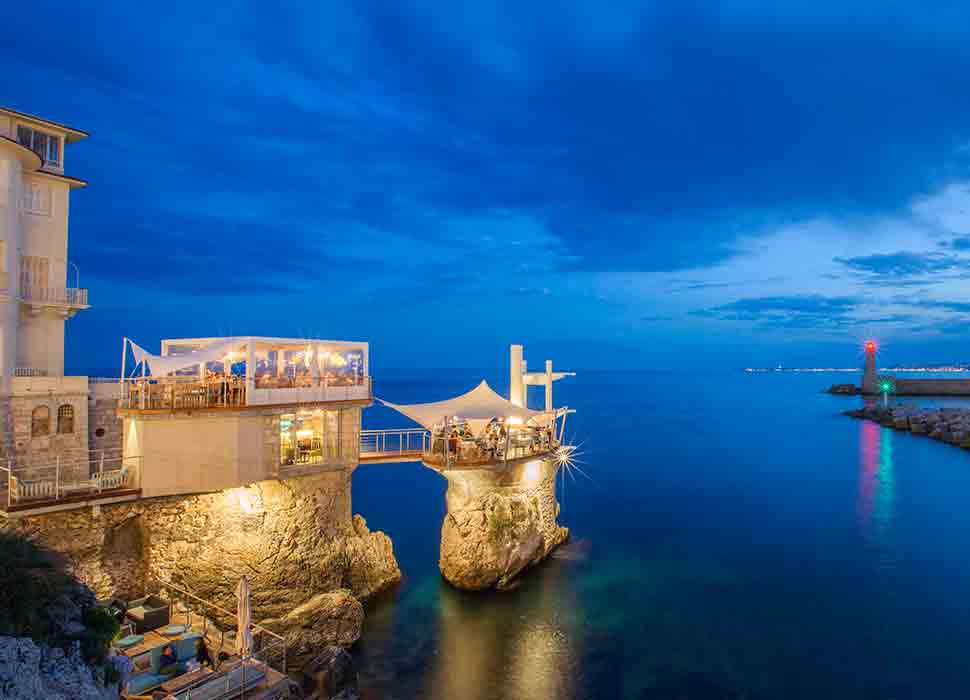 Le Plongeoir is named for the diving board on its premises / Image: Olivia Briend Wooldridge (obwphotography.com)

Perched six metres above sea level atop a rocky outcrop on the Cap de Nice, Le Plongeoir became a pretty big deal as soon as it opened in 2015. Named for the diving board (which still stands outside the restaurant) from which brave souls once plunged headfirst into the water, this breezy dining room and bar is still the place to celebrate a special occasion in the city. Fresh and modern Mediterranean cuisine is the house speciality, but it’s the scene-stealing setting which is the real star of the show.

North of Gare Thiers (the main train station) in the hip Libération neighbourhood, Brasserie de l’Union has been serving up classic Niçois dishes since 1949. Many despaired that this Nice institution would be lost when a fire ripped through the premises in 2015, but Union rose from the ashes just a year later. In the warmer months, the covered outdoor terrace is perfect for long lunches, while the daube provençale – a slow-cooked beef stew served with ravioli or gnocchi – warms up chilly winter afternoons. 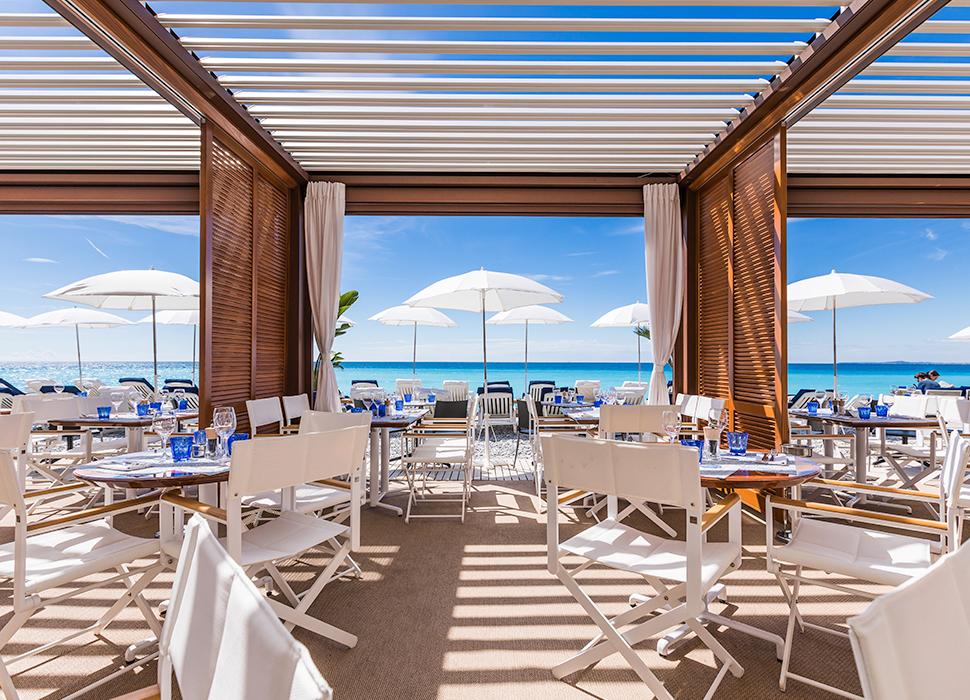 Another offering from local restaurant dynasty, the Gusto family (of Boccaccio, La Favola, and La Voglia fame), Le Galet is a beach bar and restaurant with a ready-made fanbase hungry for generous portions of tasty Italian food (and healthier options including its colour explosion of a poke bowl) accompanied by a bottle of crisp, Provencal rosé at the water’s edge. Save some room for the huge desserts – you can always sleep off the indulgence on one of the inviting waterfront sun loungers.

This popular bistro and wine bar behind the Nice Etoile shopping mall in the city centre can be counted upon to dish up both a consistently good lunchtime plat du jour as well as ample people-watching possibilities. The servers are brisk but always find time to recommend food and wine pairings, although diners are encouraged to pick a bottle themselves from its well-stocked wine cellar. The steak-frites is highly recommended.

A temple to all things organic, natural and locally sourced, this part-grocer, part-restaurant is tucked down a side street near Place Garibaldi. Loyal customers pop in and out to stock up on pantry staples, fruit and veg, or to fill up empty bottles with wine. Come lunch and dinner, all eyes turn to the kitchen and the suggestions of the day – neatly divided into vegan, vegetarian and carnivore options.

Industrial-vintage is the vibe here

One of a rush of exciting, smaller venues that wouldn’t be out of place in Paris or London, Lavomatique in Vieux Nice has quickly become the cool kids’ favourite with its inventive and ever-changing menu of small, tapas-style sharing plates (which, depending on the day, range from falafel to fresh anchovies and BBQ quail), a predominantly natural wine list, and a retro-chic façade which hints to its past life as a laundromat. Each dish is cooked to order in an open kitchen, making the bar stools prime real estate.

It would seem that whatever restaurateur Armand Crespo touches turns to gold in Nice's food and wine scene. Any of his other Vieux Nice addresses (Le Bistrot d’Antoine, Le Bar des Oiseaux, Peixes, La Cave du Cours) could easily have made this list, but for traditional French cooking it’s hard to look past his country-style bistro, Le Comptoir du Marché. Drawing inspiration from the morning’s market haul – in particular the catch of the day – the menu is short but always on point. 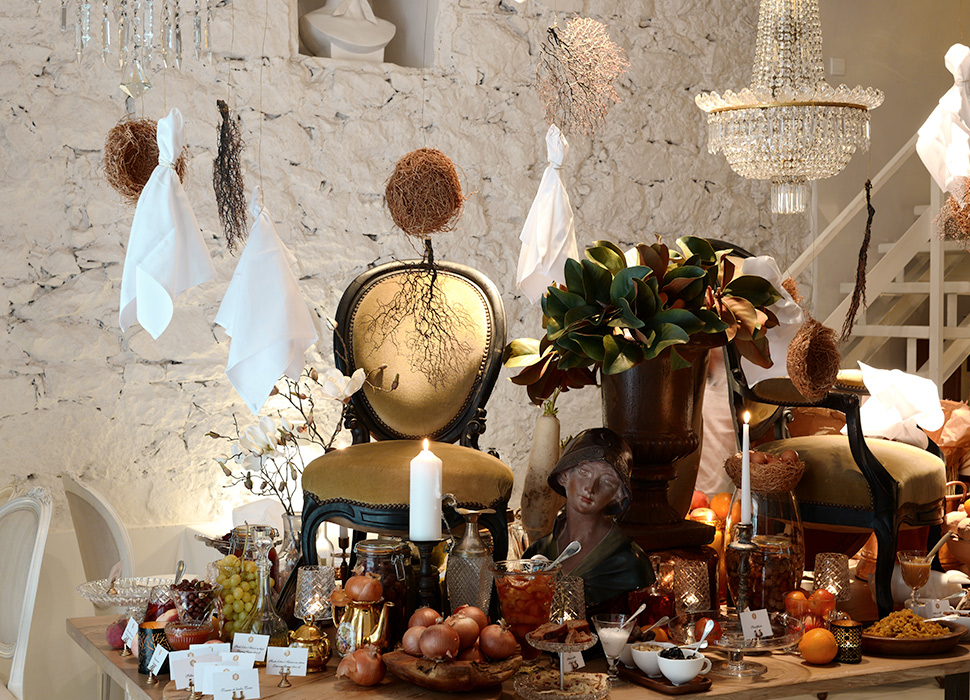 When his eponymous restaurant in Nice’s trendy port district first earned a Michelin star in 2016, Jan Hendrik van der Westhuizen shot to fame in his native South Africa as the first SA chef to head up a kitchen blessed by the tyre company. His cooking champions both the methods he learnt as a young lad on his family farm, and fresh, regional ingredients from the French Riviera. The moody interior of the main restaurant is a stark contrast to the blinding whites of Maria, the restaurant's elegant private dining room across the street.