View of the cathedral in Limoges / Image: Adobe Stock

The 10 best things to do in Limoges

There's more to this French city than porcelain and madeleines, although those are pretty great too. Here are our favourite things to do in Limoges...

View of the cathedral in Limoges / Image: Adobe Stock

Limoges enjoys a dual reputation, first as a centre for fine arts – the porcelain trade stretches back centuries, with countless gorgeous pieces gracing elegant museums and adorning public spaces. But there’s a steelier side too – it was one of the most significant pockets of resistance against the Nazis during World War Two. Here’s our pick of the best things to see and do in this pretty, proud city.

Peruse the porcelain at the Musée National Adrien Dubouche 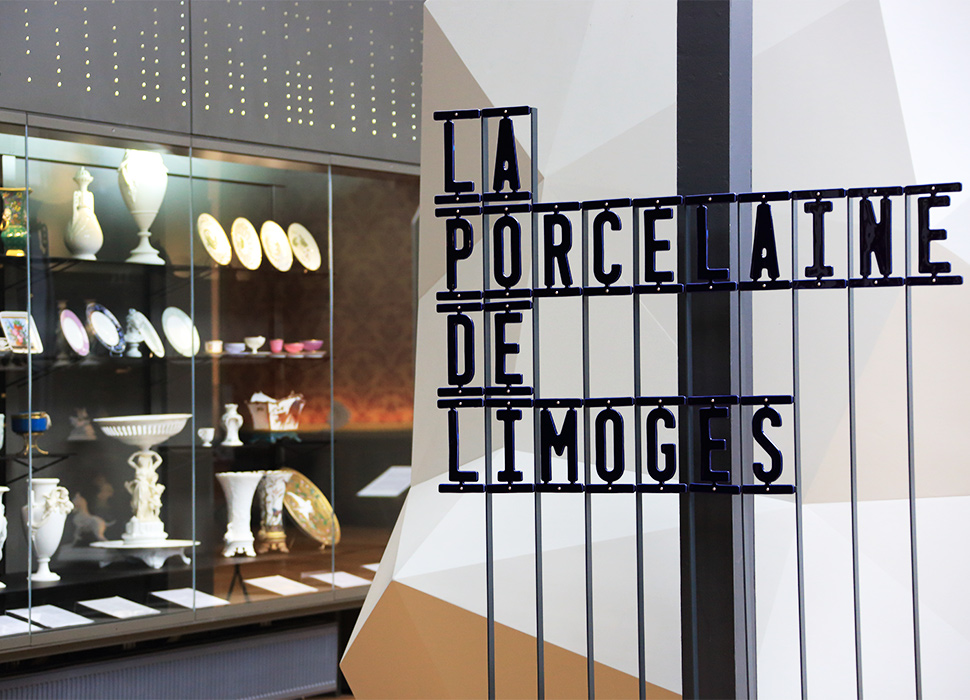 It would downright barbaric to visit the European capital of porcelain and not pay your respects at its greatest museum. Behind that fabulous Italianate facade perches 12,000 carefully propped-up items of upscale earthenware, from local craftspeople and international pottery bigwigs like Meissen and Royal Doulton. Following a spruce up a decade ago it’s now split into four zones, including the restored classrooms of the École d’arts décoratifs, some splendid art nouveau halls and a ceramics techniques bit so you can learn all about how these exquisite knick-knacks are made. 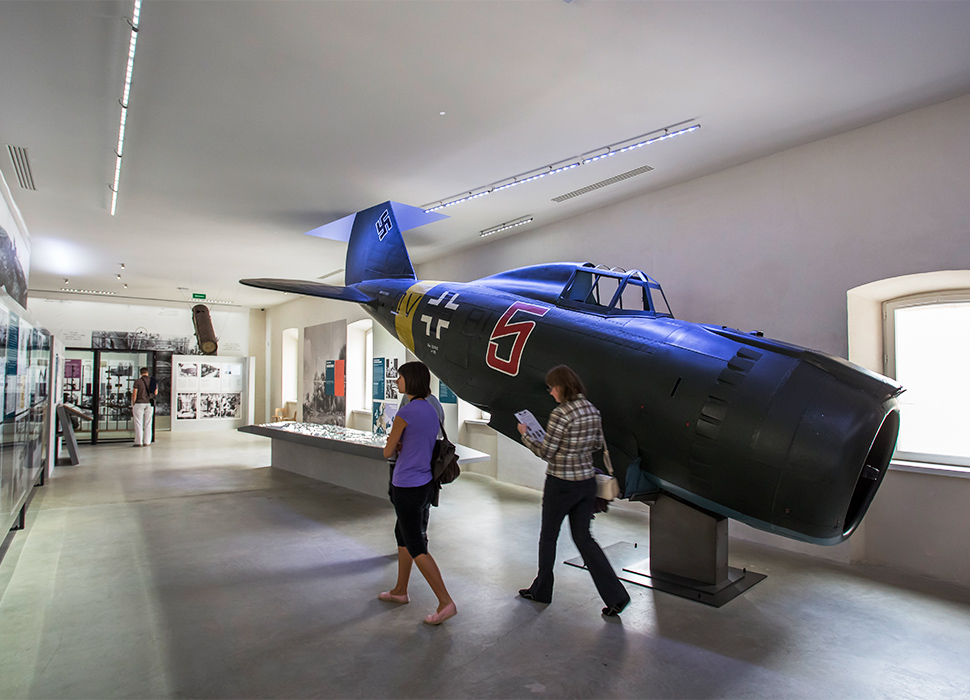 During the Second World War, Limoges and its surrounding countryside became a hotbed of ‘la Résistance’, the noble movement founded in order to frustrate, evade and ultimately unseat the nation’s horrific Nazi occupiers. Learn about their culture, their triumphs and their occasionally grisly failures – not least the infamous deportation from Haute-Vienne – at this eye-opening and highly emotional collection of photographs, letters, posters, clothes and grim military hardware. And all in the pretty setting of a former 17th century convent. 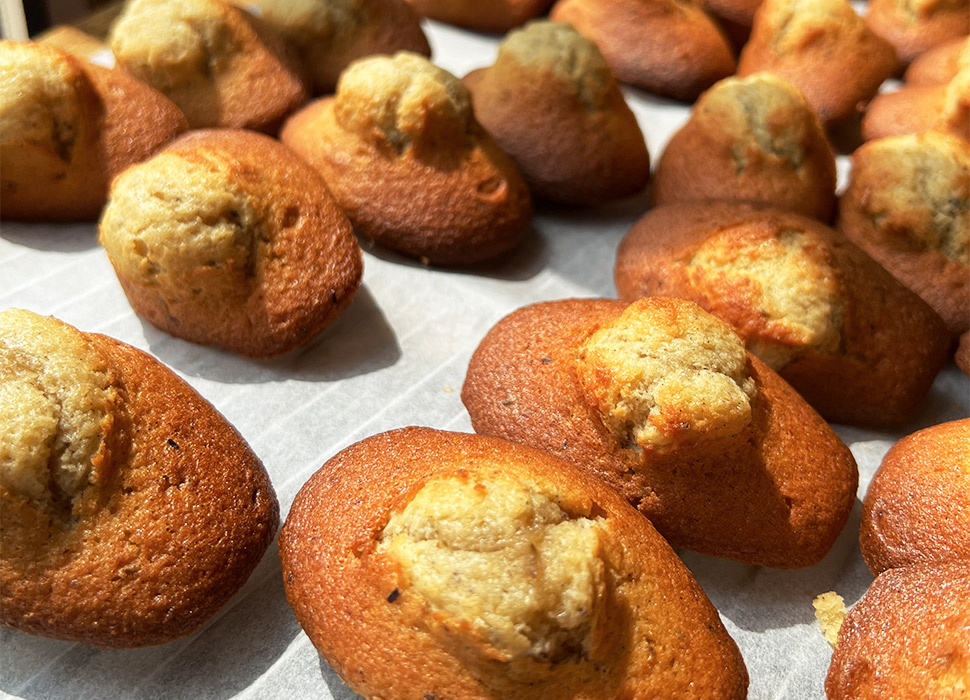 The Madeleines at Boulangerie Feuillette

Folks in Limoges love these dainty little almond and sponge fancies, celebrated by French author Marcel Proust in his famous work In Search Of Lost Time. For a traditional taste, you can’t go wrong at Les Madeleines Bébé (3 Rue Vigne de Fer) where they’ve been baking them for four generations. At award-winning Boulangerie Gavroche (13 Pl. des Bancs) they make a mean Madeleine with rich dark chocolate. And at plush Boulangerie Feuillette (4 rue Nicolas Appert) the cakes are trad but the vibe refreshingly contemporary. All totally unforgettable. 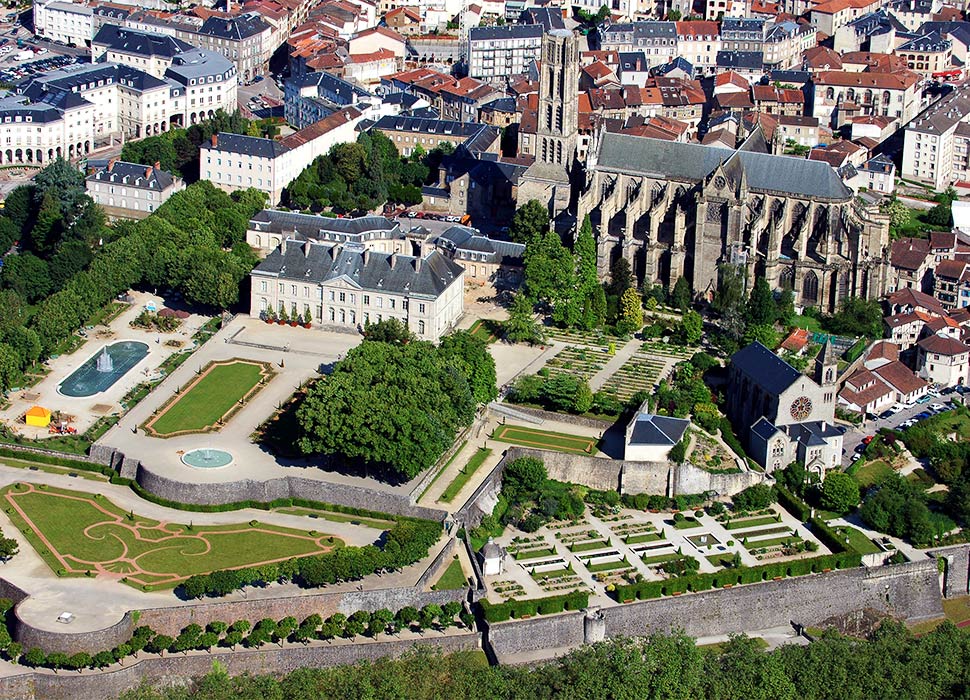 Busy gardeners have been growing all sorts of medicinal and other practical herbs on this hilly site overlooking the river since the middle ages. It’s been remodelled a few times since then, not least in 1910 when visionary city bigwigs decided to buy up the site and open it to the public. Some 1,200 meticulously cultivated plants now thrive here, separated into groups – food and condiments, aromatics, dyes etc – and it’s a bloody lovely spot to enjoy some free spiritual uplift against the backdrop of Cathédrale St-Étienne and the rowers on the Vienne.

Bone up on history at Rue de la Boucherie 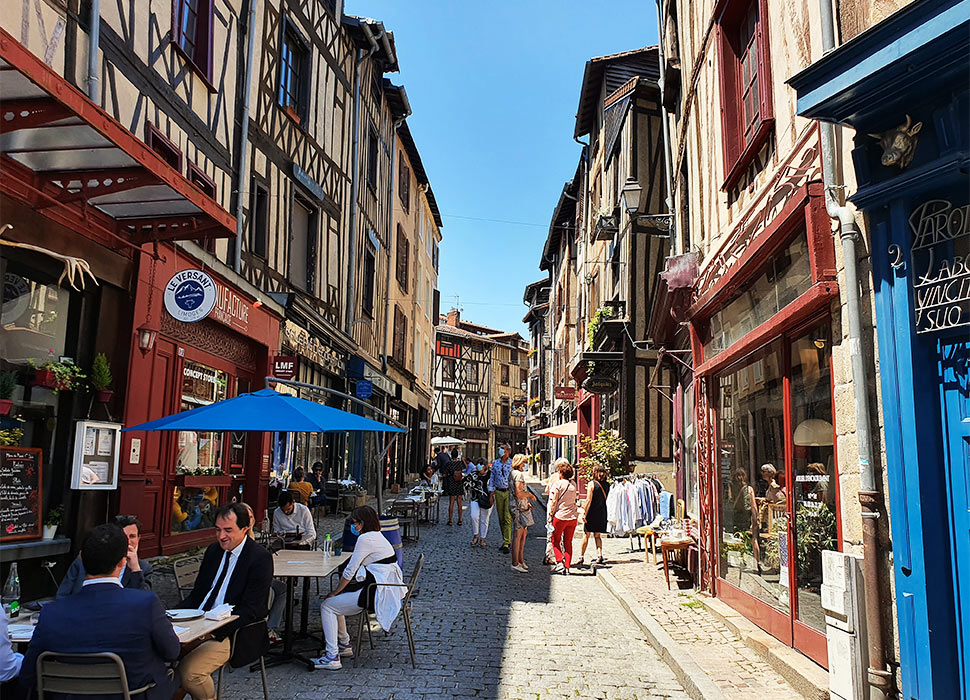 If you’re the kind of traveller that likes your pavements cobbled and your shopfronts half-timbered, this pedestrianised thoroughfare is where you head to get your quaint on. A regional hub of the meat trade from the 12th until the 20th centuries, it’s somehow escaped development and the ravages of war, with artisans still plying their trade here and there and rocking a cutesy, Medieval energy that begs to be photographed. Special shout out to dinky Chapelle St-Aurélien, a lovingly-maintained 15th century church dedicated to the patron saint of ‘les bouchers’. Well worth a butchers.

Nibble your way around Halles Centrales 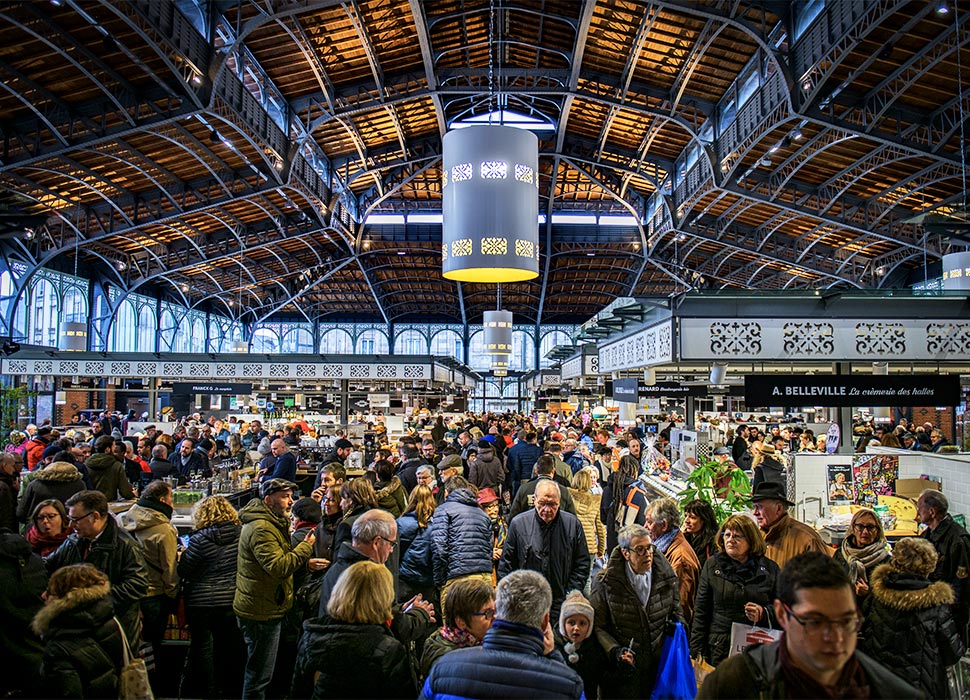 Forget the food, for a moment at least. Limoges’ central market hall is a stirring specimen of late 19th-century architecture, from the imposing ironwork – cast by Gustave Eiffel protegés Levesque and Pesce – to the decidedly vernacular use of 328 porcelain tiles, each bearing an image of the produce sold therein – everything from game birds to grass-fed beef to multicolour veg and herbs and spices. Look around, and you’ll notice the roof isn’t supported by any columns. And check out the chandelier made of ladles. Like we said – stirring.

Pay your respects at Oradour-sur-Glane 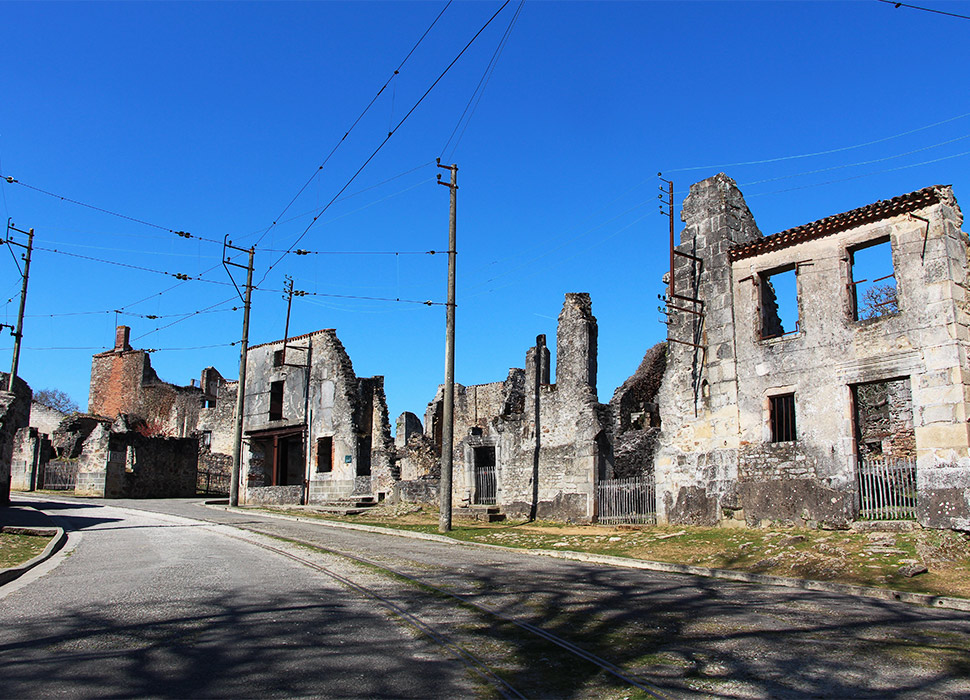 On June 10, 1944 – just a handful of days after the D-Day landings in Normandy – a vengeful division of the Nazi SS rounded up 642 men, women and children of the sleepy non-combatant village of Oradour-sur-Glane, about 20km outside Limoges. Save a handful of inadvertent survivors, all were murdered, their village razed to the ground. Ever since the village has been left as a chilling living museum of atrocity, a haunting, thought-provoking monument to the country’s darkest time. At the modern, multimedia visitor centre guests are exhorted to reflect and, above all, ‘souviens toi’ – ‘remember’. 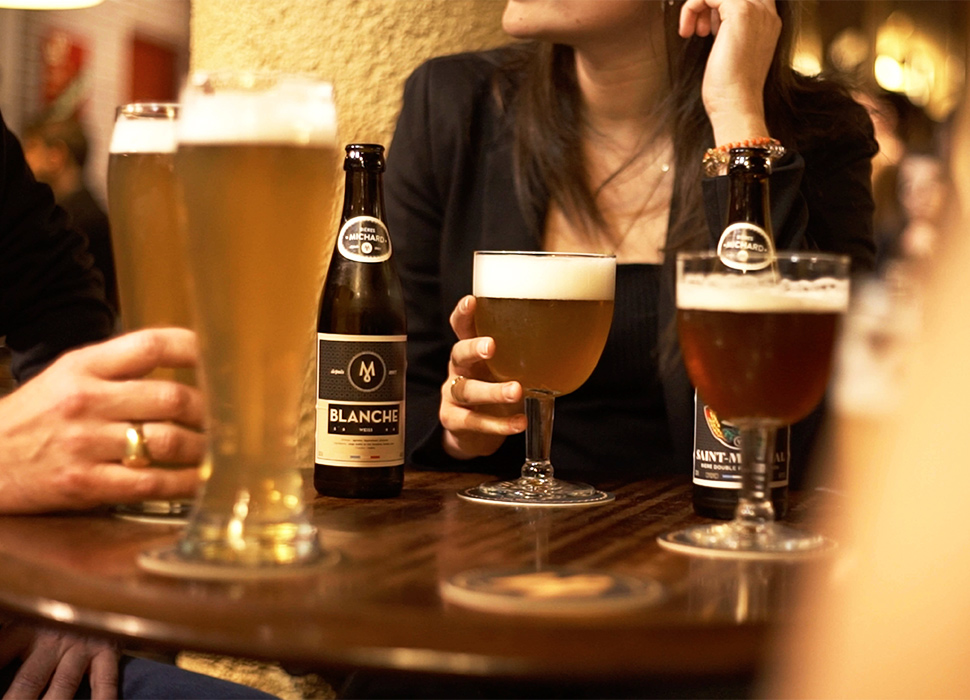 This buzzy, friendly and reliably-heaving-with-thirsty-locals brewpub is a cracking spot to knock back a few chilled foamy ones at the end of a long day sightseeing. Nearly 40 years in the game and properly independent, the room is all chic modern lighting and gleaming copper vats. That smell? House speciality Flammkuchen, also known as tarte flambée, a German/French borderlands take on pizza. That, wouldn’t you know it, goes down splendidly with a beer. 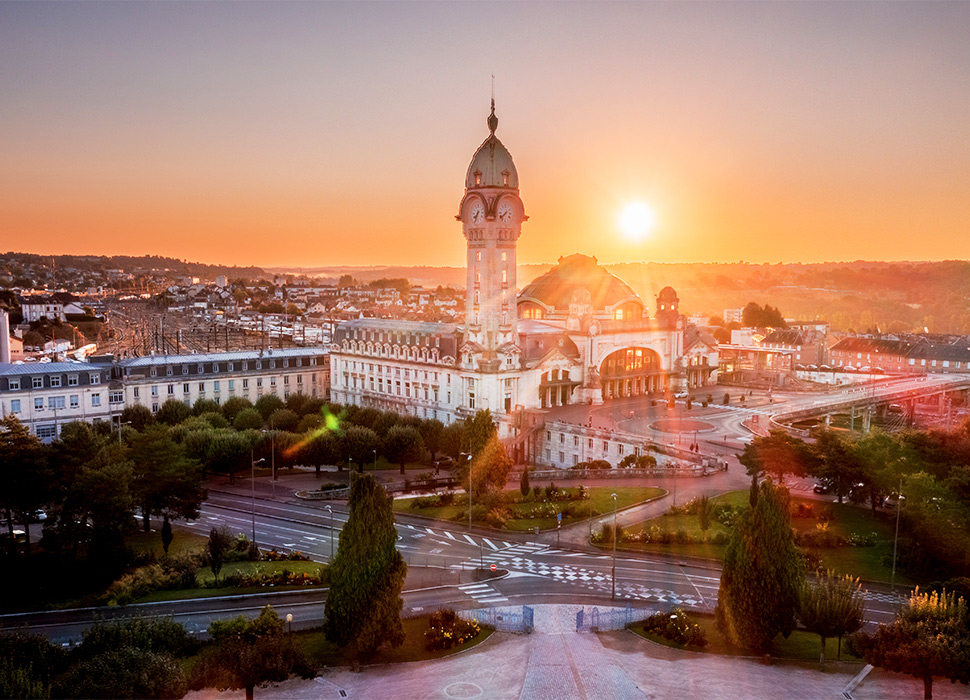 Mock trainspotters all you want – railway architecture is beautiful and rarely moreso than at Gare de Limoges-Bénédictins. On the site of an old leper colony, and next to a Benedictine monastery – hence the name – this absolute peach of a station is a fabulous confection of Art Deco and Art Nouveau styles. Audrey Tatou shot a Chanel No5 ad here, and the 67-metre clock tower – taller and prettier than Gare de Lyon in Paris, just sayin’ – is as romantic a photographic backdrop as you’ll find anywhere. Infrastructure from a golden age.

Chill out at Pavillon du Verdurier 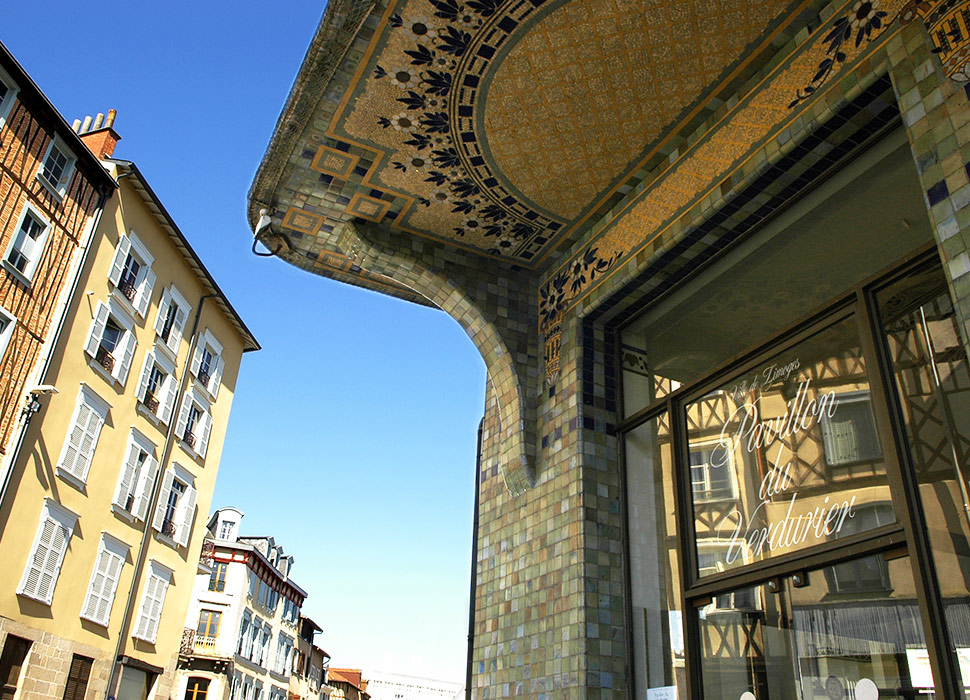 This gorgeous octagonal structure started life as a humble fridge for keeping meat cold after a long sea voyage from Argentina – partly a legacy of World War One shortages, partly to challenge the monopoly of the butchers up the road on Rue de la Boucherie. It’s trés Limoges – studded with trademark ceramic tiles, and designed by Roger Gonthier, who also put up the station (above). Over the years it’s variably been a market and a bus garage – today it’s a groovy gallery and event space. Cool, huh.