Why you should visit Annecy - the Venice of France

The tourist crowds may head to the City of Canals, but you’ll find just as much watery charm in this scenic Alpine town

If you’ve visited Venice you’ll know few places on earth can match its charm. Many countries claim to have their own version of the floating city, but do they really? On investigating one such boast, we were pleasantly surprised. Nestled in the Alps, less than an hour's drive from Geneva is the French town of Annecy. Split into two distinct areas: the old town, a medieval enclave of dusky-hued buildings on emerald-green waterways, and the lakeside: a vast alpine lagoon, with watersports galore, Annecy has no end of reasons to visit. Here’s what not to miss on a trip to the Alpine town.

After more fun in the mountains? Hit up these great spots in Europe to hit the slopes.

Or, get a load of the hottest breaks for some winter sun. 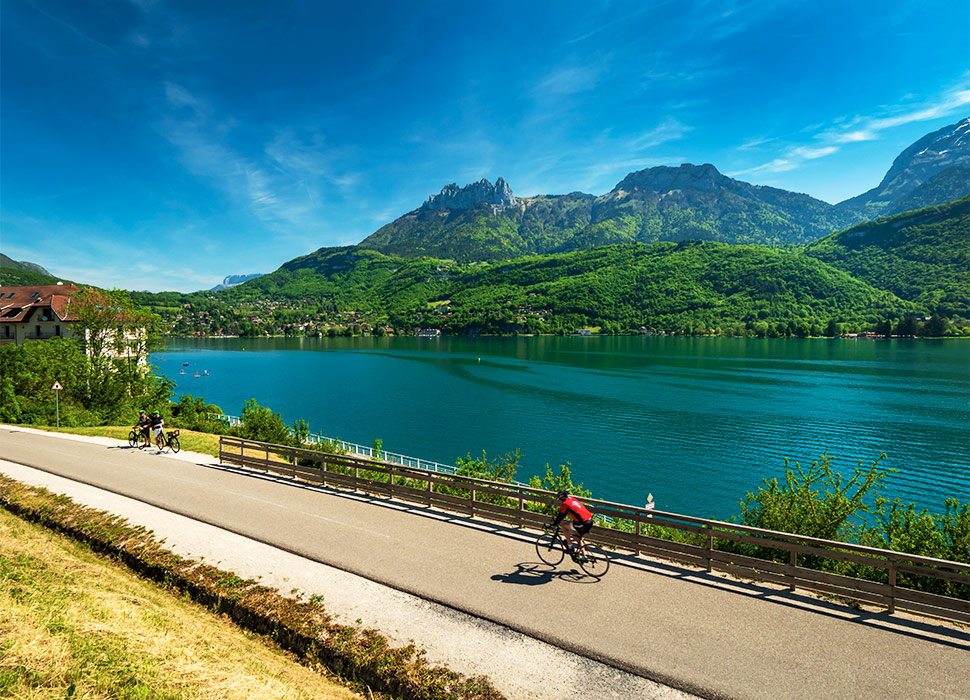 Annecy is a cyclist’s haven. All along the lake are spectacularly-kept cycle paths and with plenty of bike hire shops along route, you don’t have to pack your wheels on the plane. The tour around the lake is called “la voie verte” or “greenway”. It’s about 33 kilometres, overlooked by precipitous alpine peaks and hugging the shimmering emerald waters of the lake itself. Stop at Plage de la Brune en route to catch some rays. 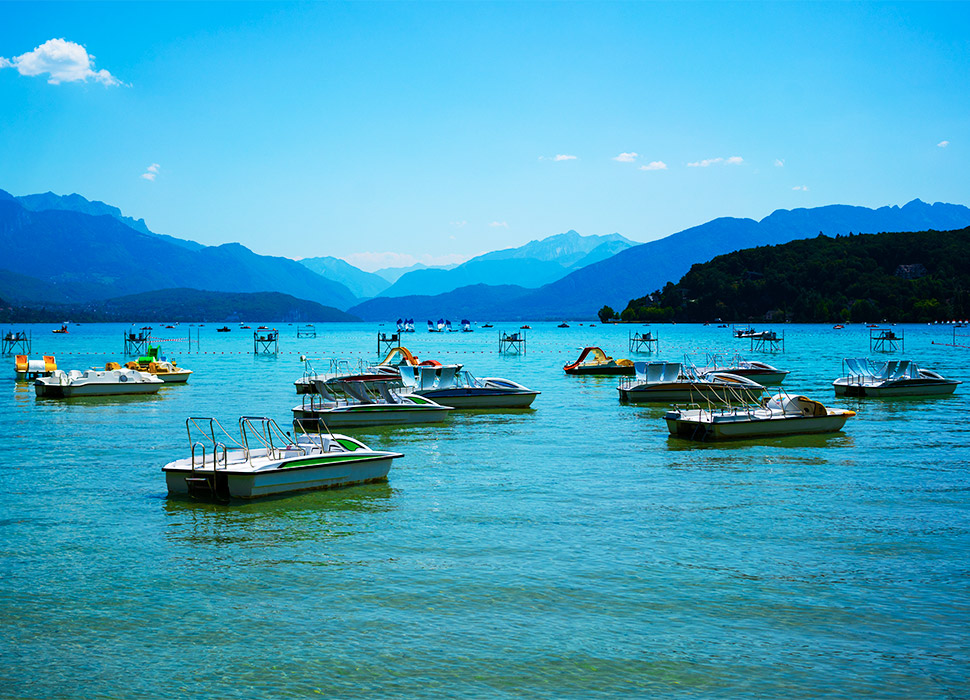 Choose a sunny day, pack a picnic and rent a pedalo to head out on the lake. Lake Annecy is fed by mountain springs making the water crystal clear. In summer, it's easily warm enough to take a dip. Many of the pedalos – which start at about €20 per hour – are fitted with slides to help a speedy descent into the alpine waters. Tired legs? Bob about, soaking up the sun while you lay out the sundeck. If you close your eyes, it’s almost like being on a yacht (albeit a leg-powered one). 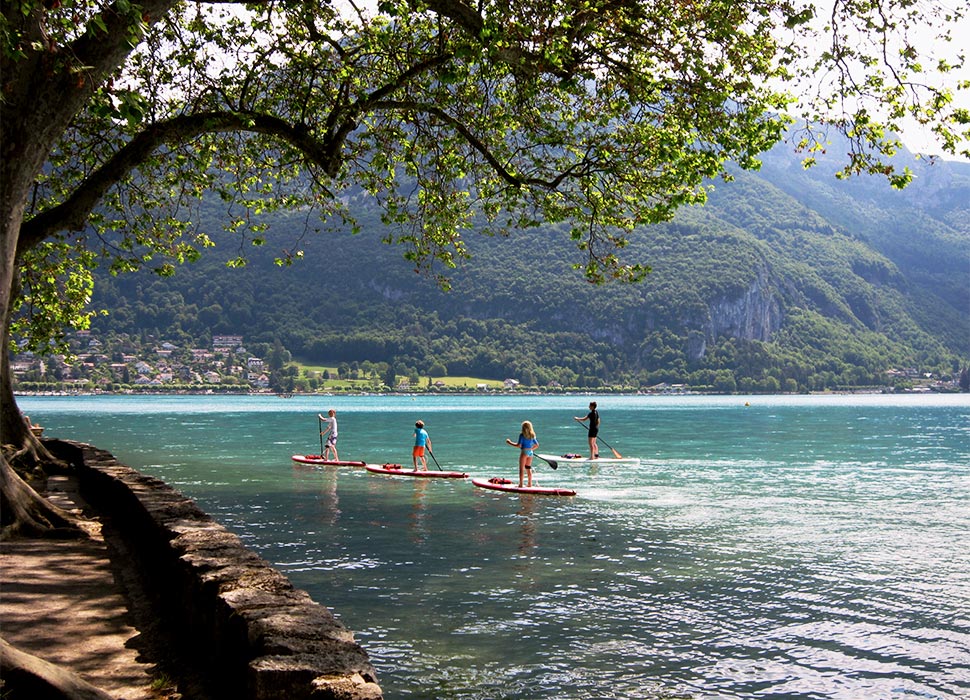 For the more adventurous among us, the lake’s clear and thriving waters also make it great place for snorkelling and scuba diving. There are over 30 species of fish and several species of crayfish. The best spots for snorkelling are the Pontons Suspendus in Annecy-le-Vieux, La Madeleine in Talloires, the Château de Duingt, and the drop-offs of the Roc de Chère (which can be accessed from the bay of Talloires or the southern end of the promenade in Menthon-Saint-Bernard). You can also practice your balance and rent a paddleboard (lessons are available) or you could even try kayaking. Try Activ Annecy to get started.

Eat fondue all year round 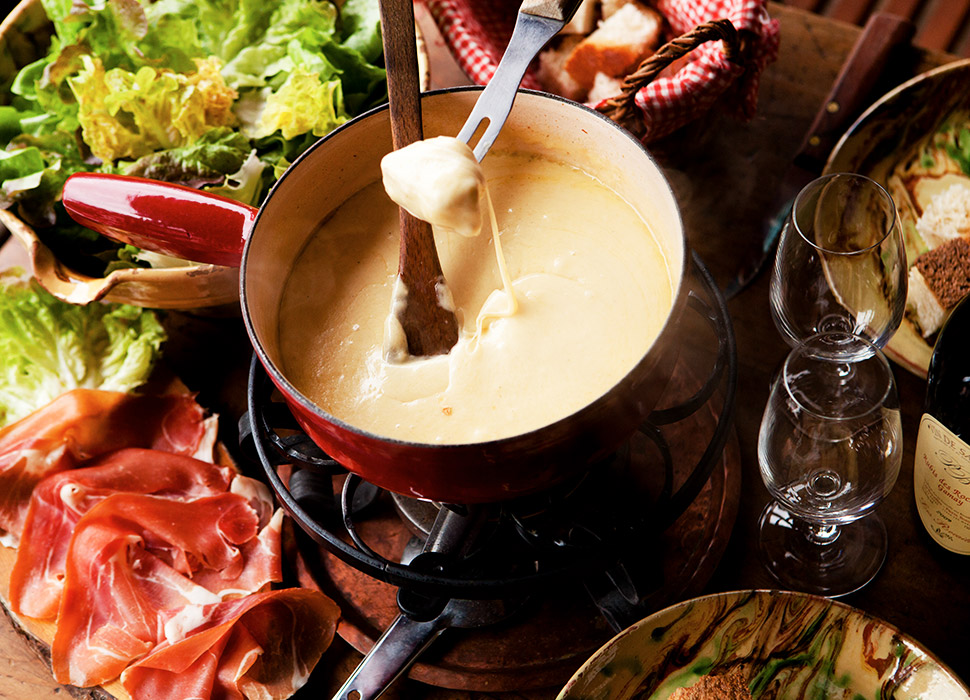 Swiss fondue – dippable, melted cheese mixed with either white wine or kirsch – is not just native to Switzerland. Sit alongside Annecy’s Thiou canal (and worry your doctor) by submerging a fresh baguette and cold cuts into a vat of gooey, melted Gruyère. For first-class fromage, try Le Freti who have cave-aged cheeses on site and 16 types of fondue to choose from, including specialities from each local region. We love the ones mixed with mushrooms.

Smooch on the Pont D’amours 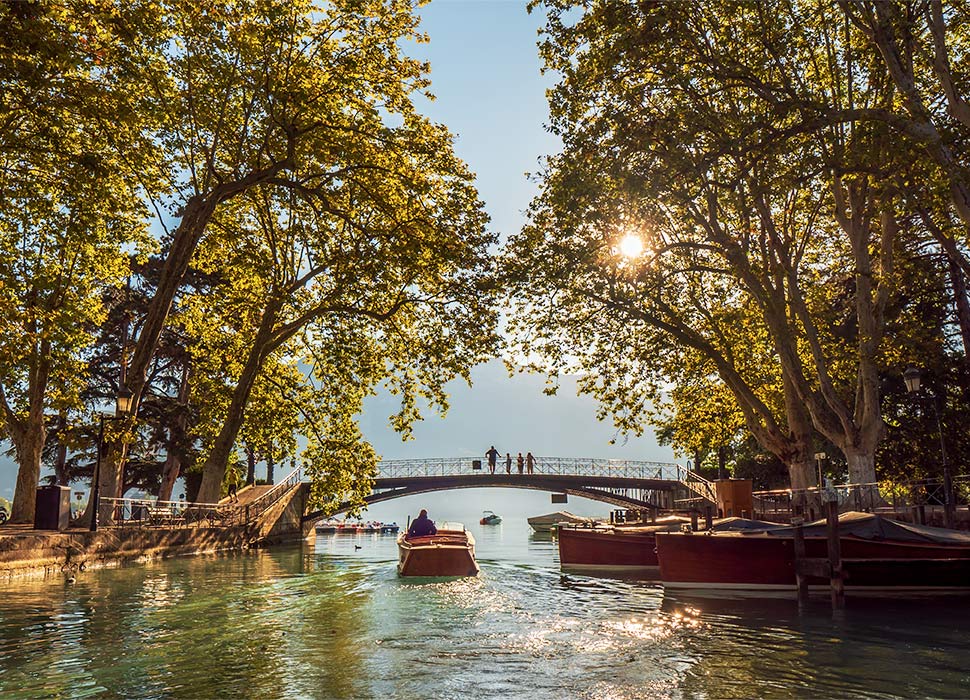 Once a meeting place for prostitutes, now a romantic lover’s landmark overlooking the lake, rumour has it that if you kiss your partner on Annecy’s pont d’amours – or bridge of love – you will never break up. The dainty, wrought-iron bridge designed in 1907 by Charles Galetto, is a picture-perfect old-town stop for holidaying couples. Just be careful who you pash – you might get stuck with them.

Get a snap in front of the Palais De L’ile 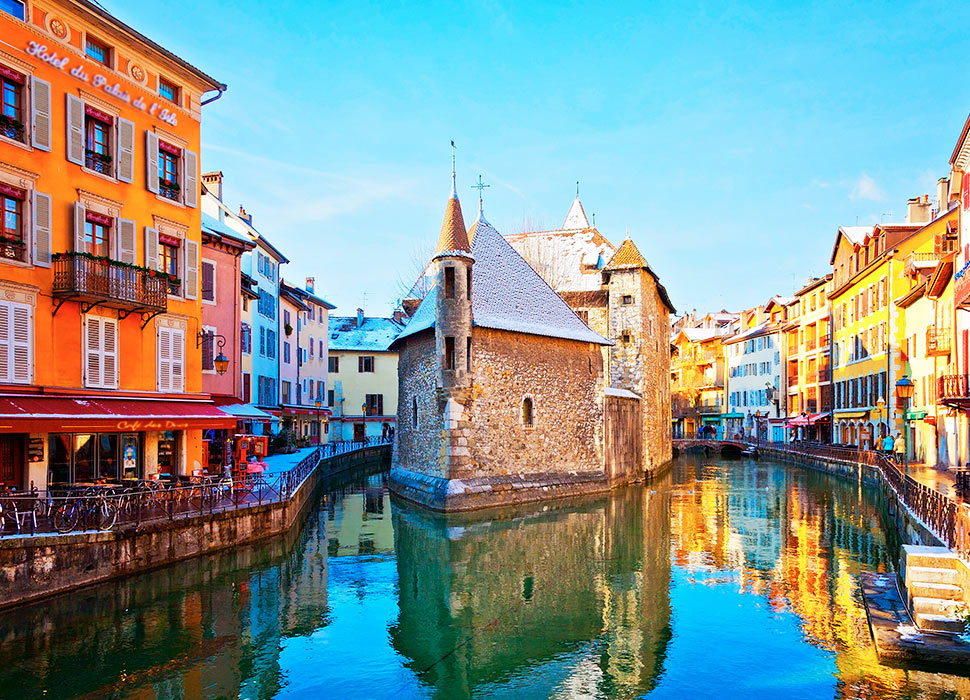 If you’ve seen a photo of Annecy, it’s undoubtedly of the Palais de I’ile. Located on the Thiou Canal in the old town, the medieval castle was the 12th-century former residence of the Lord of Annecy, a courthouse and prison for the town’s miscreants. These days it’s a museum dedicated to Annecy’s heritage. Explore the place where they used to mint coins on site and get the history of the building’s ship-like facade. It’ll also be a cracking backdrop to your holiday snaps.

Lick the best cone in town 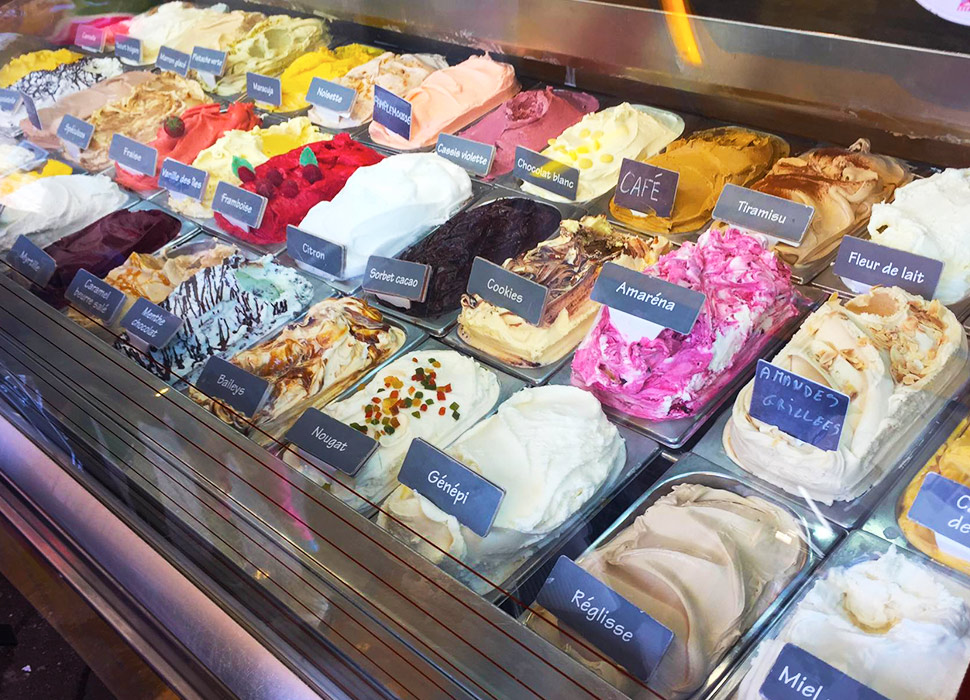 The place in the old town to treat yourself to ice cream is Le Glacier Des Alpes. Filling cones since 1966, it’s been voted the 9th best ice cream parlour in the whole of France. Famed for its generous boules atop waffle cones, the family-run business doesn’t bombard you with hundreds of flavour choices – quality is key here – but it does offer some unique glaces such as kibana (kiwi and banana) and toasted almonds. Each cone comes with a little taster scoop – perfect for when you can’t decide.  Don’t be put off by the queue: it moves quickly. 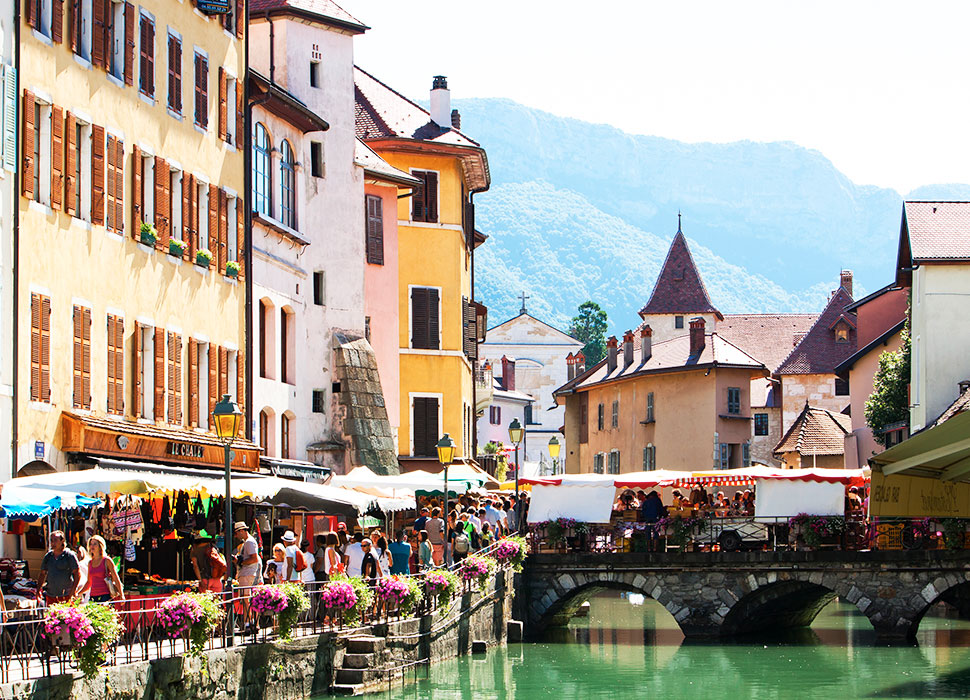 Antique and flea lovers will enjoy the market in the Old Town, alongside the Thiou, on the last Saturday of every month. Over 150 vendors set up shop a mix of traditional flea market wares and also some alpine specialities including vintage cheese-making paraphernalia and retro snow shoes. For fruit and veg, it’s a Sunday morning visit to Rue de Ste Claire for fresh produce and local cheeses such as Reblochon, Tomme de Savoie and Tome des Bauges. 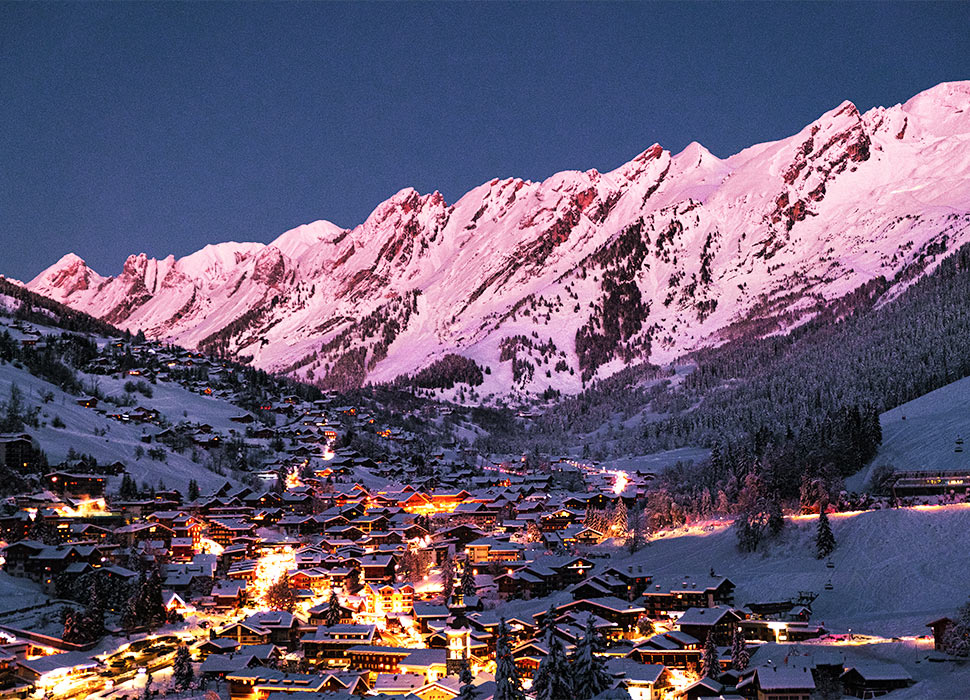 Too chilly to enjoy the lake? Being surrounded by mountains means during ski season, you are never too far from the slopes. La Clusaz and Grand-Bornand are the closest ski villages to Annecy, each about a 45-minute drive. La Clusaz is the bigger of the two and has more low-to-medium difficulty runs but if you’re after a challenge, head to Grand-Bornand. In summer, La Clusaz also becomes a hikers’ and climbers’ paradise – pros should check out the 700m Via Ferrata called Yves Pollet-Villard.