The best things to do in Helsinki

The Finnish capital is blessed with knockout natural features, a cracking cuisine scene and architecture to die for. Here’s our pick of Helsinki’s hottest highlights

Finland's number-one town really comes into its own when the mercury drops. Read our take on Helsinki in winter – a festive guide to the Finnish capital.

Go down to the woods at Keskuspuisto 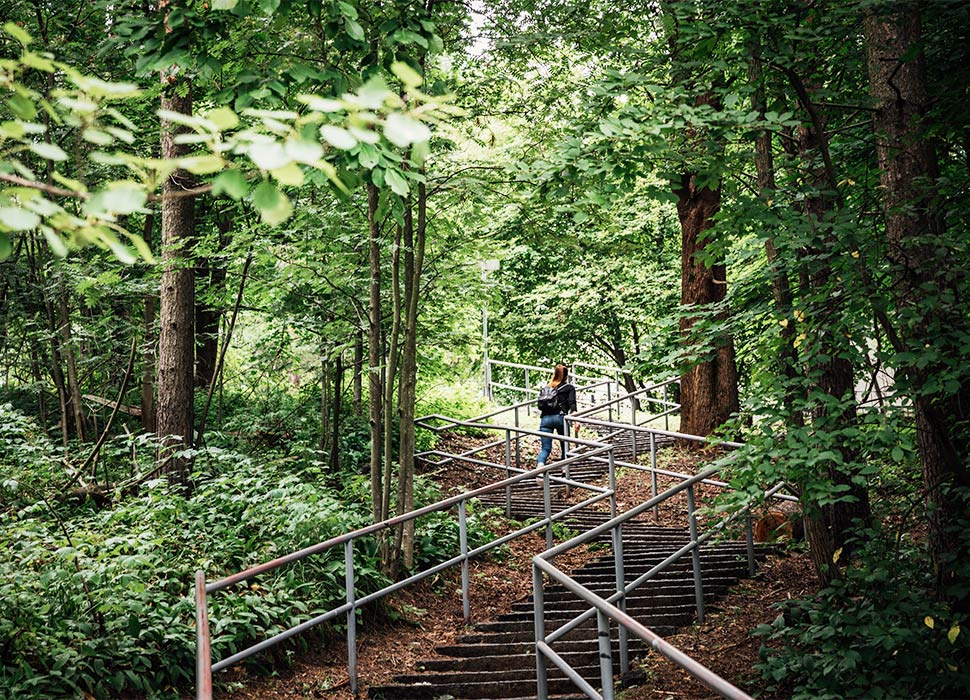 Helsinki’s ‘Central Park’ or ‘Keskuspuisto’ is a far cry from your typical humdrum urban recreation area. A 10km-long woods that runs from Laakso in the city centre up to the Vantaanjoki river in the north, it has over 100km of hiking trails and a full-on sprawling forest feel. In terms of wildlife, there are Eurasian aspens and exotic flora like solid-tubered corydalis, plus assorted woodpeckers and the thrillingly-named Siberian flying squirrel. Hire a bike and taste a sliver of Finnish wilderness inside the capital city.

Mingle with the beautiful people at Kallio 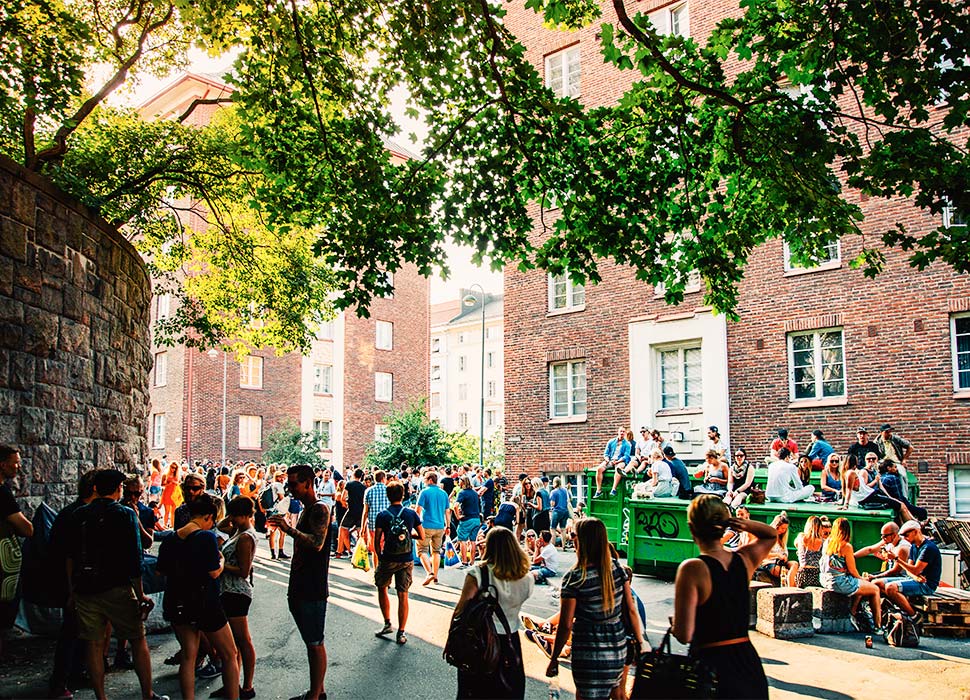 Popular with students, artists and other assorted boho types, Helsinki’s Kallio district is where to go if you want to hang out with the cool kids. Make time for an amble past Suvilahti Graffiti Wall (100m of inspiring state-sanctioned tagging real estate at Sörnäisten rantatie), and to dine at the Bear Park Café (13 Agricolankatu) – the city’s first openly gay establishment and a café that also happens to do an enticing line in sweet buns. If you linger a little later on, Kaiku (4 Kaikukatu) is widely regarded one of the best nightclubs in Northern Europe. It’s all good in this ‘hood.

Feel the heat at a public sauna 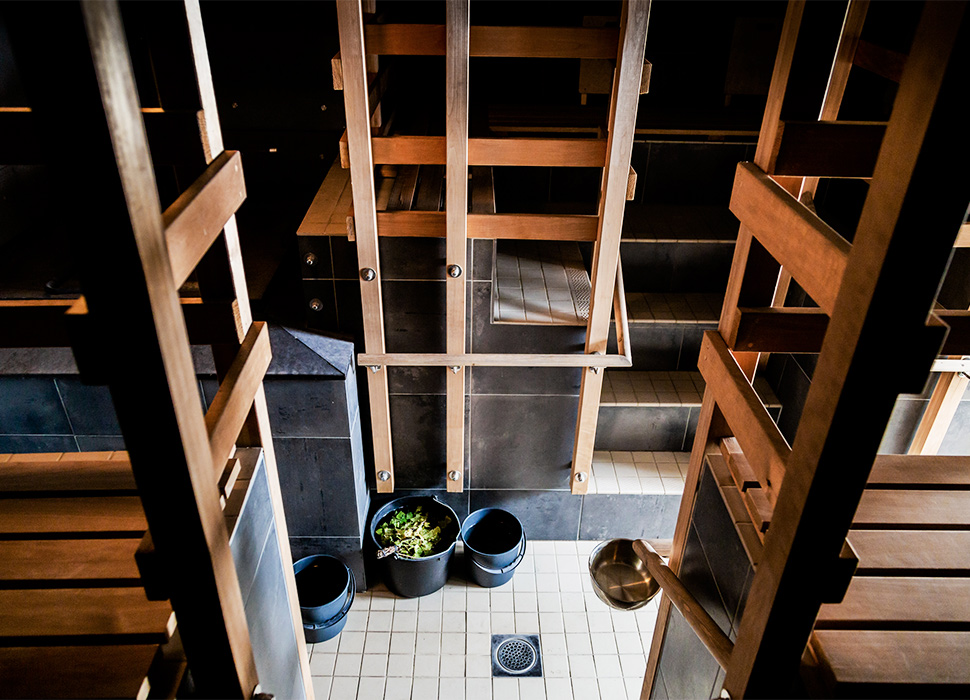 ‘Sauna’ is said to be the only Finnish word that’s made its way into regular English usage. They bloody love it. Back in the day, Finns would enjoy a sauna before marriage, during childbirth, and even as a final post-death treat before being buried. Try it for yourself with a moonlight seawater swim at Allas (2a Katajanokanlaituri), or interspersed with a fancy meal at the ultra-contemporary Uusi (10 Välimerenkatu) bar and eatery. For true authenticity, strip off at the last genuinely wood-heated public sauna in the city at Kotiharju (1 Harjutorinkatu). It’s so hot right now.

Treat the kids at Linnanmäki 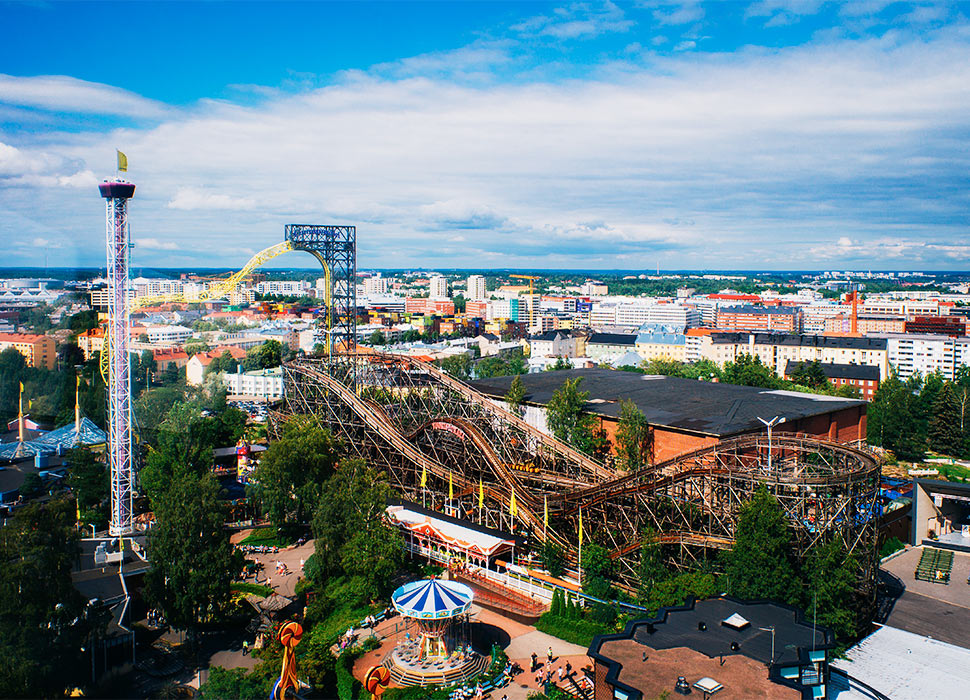 Finland’s oldest and best-loved amusement park is a glorious family day out, with everything from old-timey painted carousels and ghost trains to whiplash-inducing 4D rollercoasters. Even better, it’s run by Lasten Päivän Säätiö, a Finnish non-profit, which donates all proceeds from the park to its vital children’s welfare work. To date the park has raised well over €120 million, which is a comforting thought to bear in mind as you’re being yeeted around a terrifying high-speed loop-the-loop trying to keep your lunch down.

Hit the beach at Hietaniemi 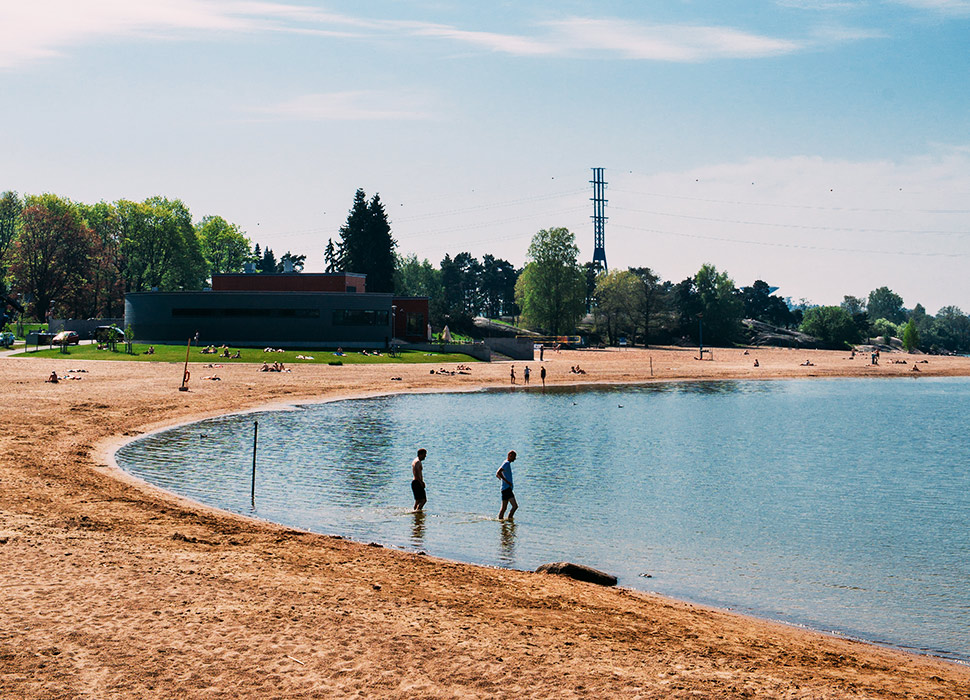 Most European capitals don’t have access to a broad sandy beach – but this one absolutely does. Semi-ironically named the Copacabana of Helsinki, Hietaniemi was once a landfill and a place for barges to dump excess sand, but nowadays – in summer at least – it’s all volleyball games and happy suntanned Finns paddling over to the nearby small islands just off the coast. There are changing rooms, kiosks and cafés open during the warmer months, as well as lifeguards, and a mini-golf course nearby. Who needs the Med? 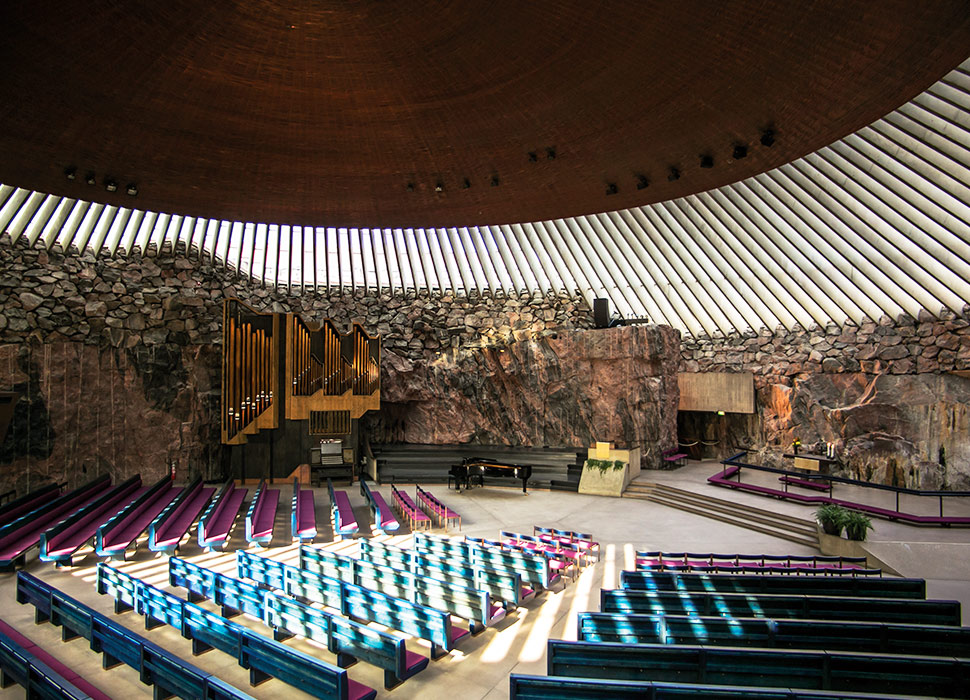 Completed in 1969 by architect brothers Timo and Tuomo Suomalainen, Temppeliaukio Church was carved out of the Helsinki bedrock, and it really shows. But it’s rough-hewn walls – down which water sometimes trickles in fetching waterfalls – and circular shape create an amazing acoustic ambience for services, or the regular concerts held here. It also has its own roaring 3,001-pipe organ. Crowning all that is a copper dome that seems to hover on a ring of glass. All in all, this handsome modernist church is a wee bit divine.

Learn as you linger on Seurasaari Island 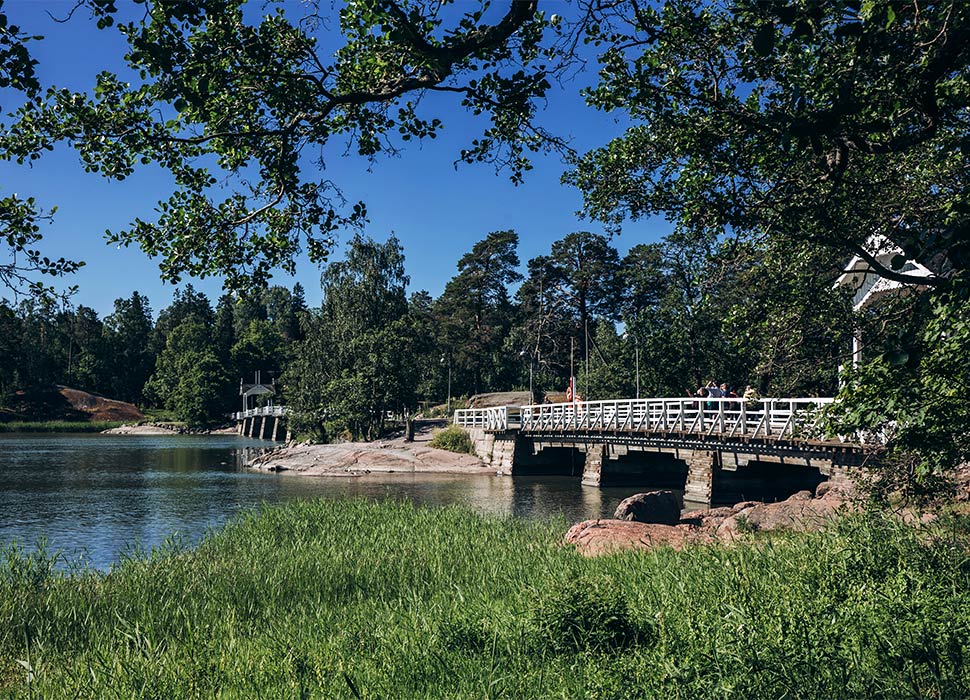 Fill your boots with Finnish folk history as you yomp around this charming, immersive open-air museum on a gorgeous natural island a short hop from the city centre. Four centuries worth of classic Finnish cottages, windmills, farmsteads, smoke cabins and manors are fastidiously recreated, so you can feel like you’ve travelled back in time, and all over the country (May-September only). Also look out for the shiny designer monument built in response to the to Finnish myth of The Kalevala on the south beach, a lovely spot for a contemplative look out to sea.

Move to the music at the Sibelius Monument 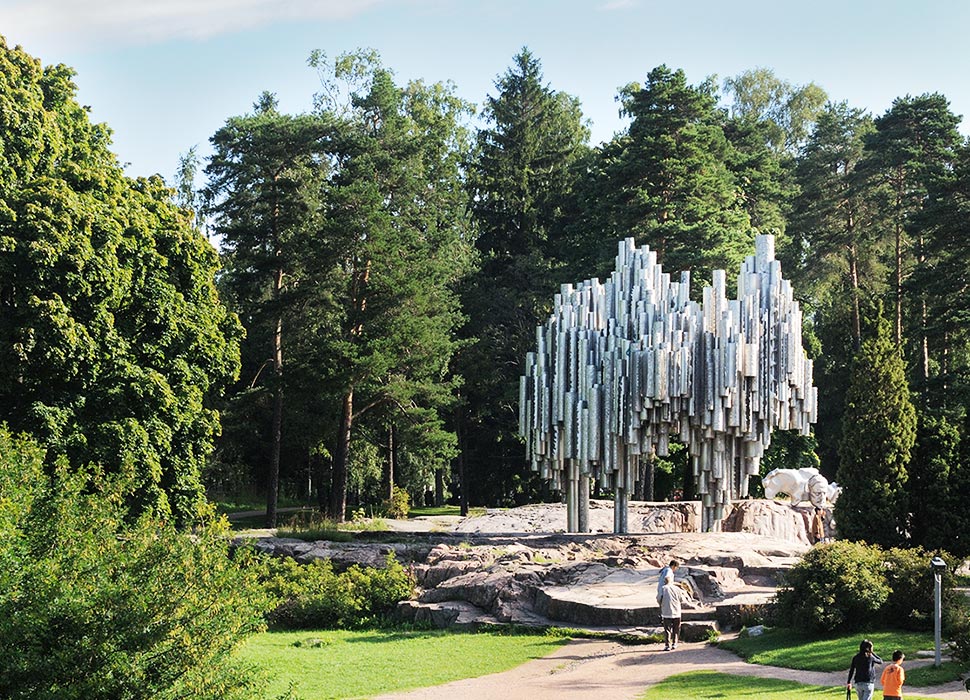 Pipe down and contemplate the genius of Sibelius at this dedicated park / Image: © Helsinki Marketing - Paul Williams

Sibelius was a feted classical composer and one of the founding fathers of modern Finnish cultural identity. His piece ‘Finlandia’ is considered the unofficial national anthem. Check out this striking abstract monument in his honour, composed of over 600 fake organ pipes in the shape of a sound wave, in the park that bears his name. It was initially hated by Helsinki folk, but is now a major landmark. "Pay no attention to what the critics say," as Sibelius himself once muttered. ‘A statue has never been erected in honor of a critic.’ 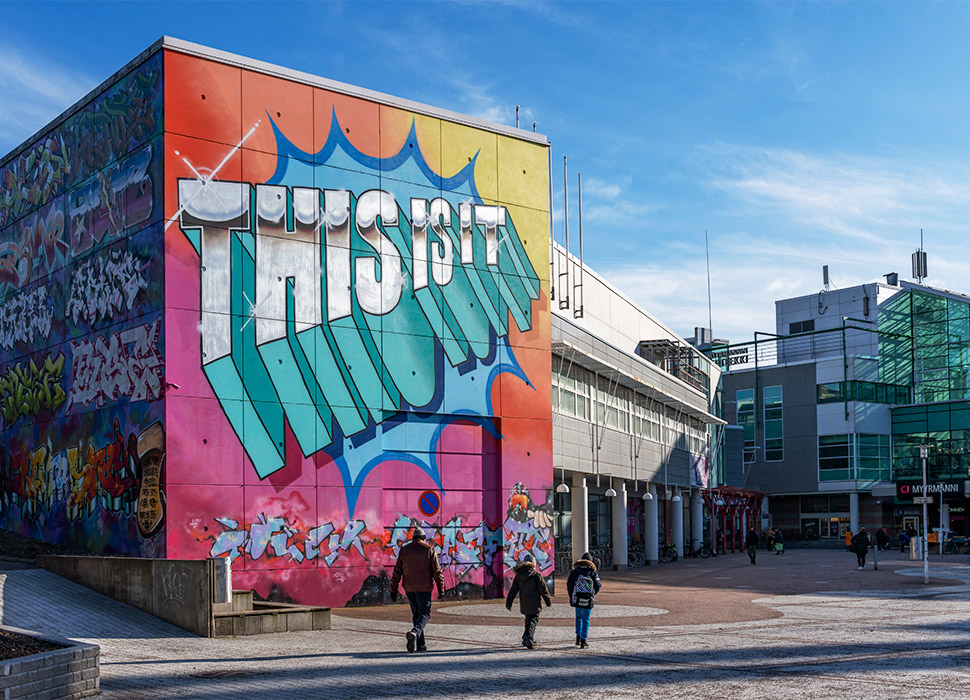 An art gallery dedicated to graffiti? You better believe it. A short train ride from Helsinki proper, the Vantaa Art Museum Artsi is a little off the tourist trail but all the better for it. Specialising in street art – including street performance – it sets out to document this most ephemeral and under-appreciated of art styles. Exhibitions change frequently, reflecting the fast-moving nature of street art, and the museum leads a campaign to document works that can’t be saved from municipal over-painting. For which the writing is truly on the wall. 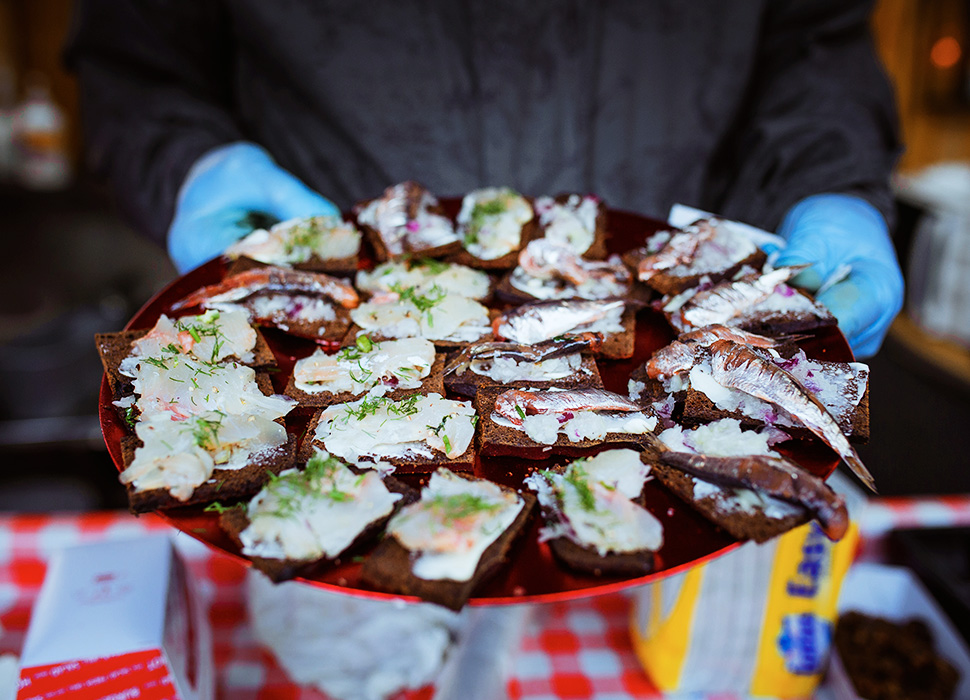 Finnish folk can’t get enough herring. The scaly delicacy is available all sorts of ways. Try it date-night fancy in a steak form at the venerable Sea Horse restaurant (11 Kapteeninkatu), established in 1934. Alternatively, plump for a cosy table with sea views at Ravintola Wellamo (9 Vyökatu). Or go straight to the source – near enough – at the Baltic Herring Market (Eteläranta). Occuring in early October every year, the Herring Market is a longstanding Helsinki tradition dating back to 1743. So you know it’s the reel thing.