We're surveying europe's cities and exploring the coolest, most-up-and-coming neighbourhoods across the whole easyJet network. This month, it's our guide to Copenhagen's none-more-vibrant district of Nørrebro

Think of everything that makes Copenhagen so brilliant: its effortless style, its fabulous food, its multiculturalism and its creativity. Now distil that down into a district of not much more than 3 sq km. That’s Nørrebro, indisputably the city’s most exciting and dynamic corner.

Nørrebro started life as a workers’ enclave, before becoming the backdrop to scenes of civil unrest in the late twentieth century. Politics certainly hasn’t been swept under the carpet here – the district's LGBTQI Pride, for instance, is an explicitly anti-commercial and anti-racist grassroots event – but the quarter has lost its reputation as a place you’d think twice about visiting after dark, becoming a welcoming and independent-minded destination.

In fact, in 2021 it topped Time Out’s annual ranking of the world’s coolest neighbourhoods. Follow the main street of Nørrebrogade all the way through it, branching off down side alleys full of one-of-a-kind independent shops, street art, coffee shops, bars and restaurants whenever the mood takes you. Here's our guide to the best of it.

Nørrebro's great and all, but wider Copenhagen is a top-tier city in anyone's books. Here's our guide to the best things to do in the Danish capital.

Want more granular guides? Check out our run-through of the trendy dockside district of Refshaleøen. 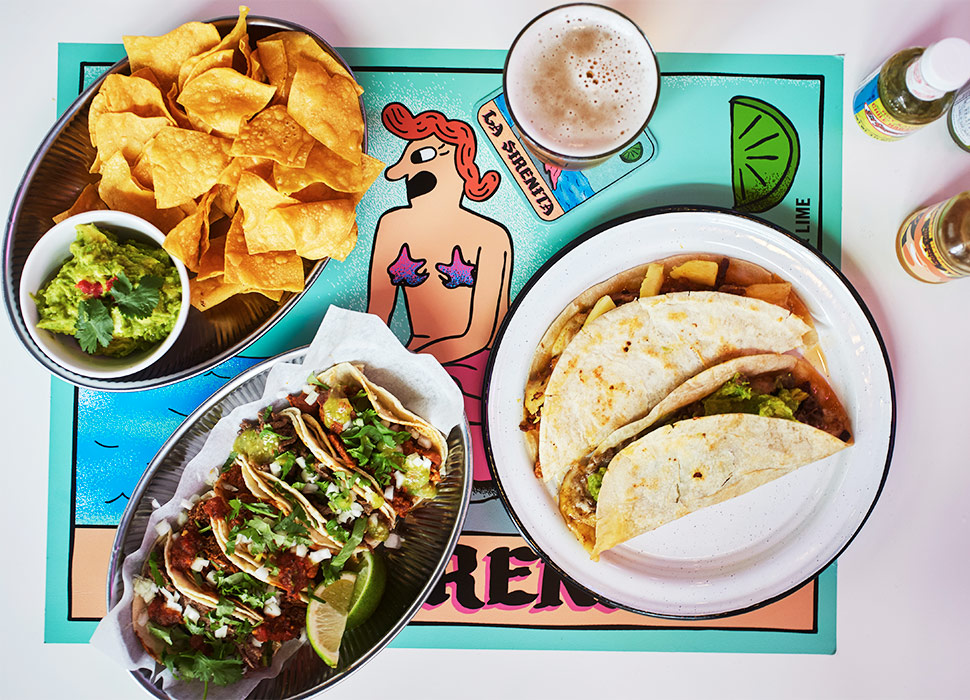 You can – and should – eat your way around the world in Norrebro. The food scene here is truly global (the district has an annual, hotly contested kebab championship), reflecting the area’s history of migration, and all inflected with a characteristically Danish casual cool. Ramen to Biiru combines hearty bowls of authentic Japanese noodle soup with local brews, and guests of all ages get the fun of ordering from a vending machine.

A taco press flown over from Mexico City is the centrepiece at taqueria La Neta, which in addition to a strong selection of mezcals and tequilas has a dozen taps of Mikkeller beer (what else?). And of course, the seafood here is world class: Oysters & Grill has a real roll-your-sleeves up neighbourhood restaurant feel. 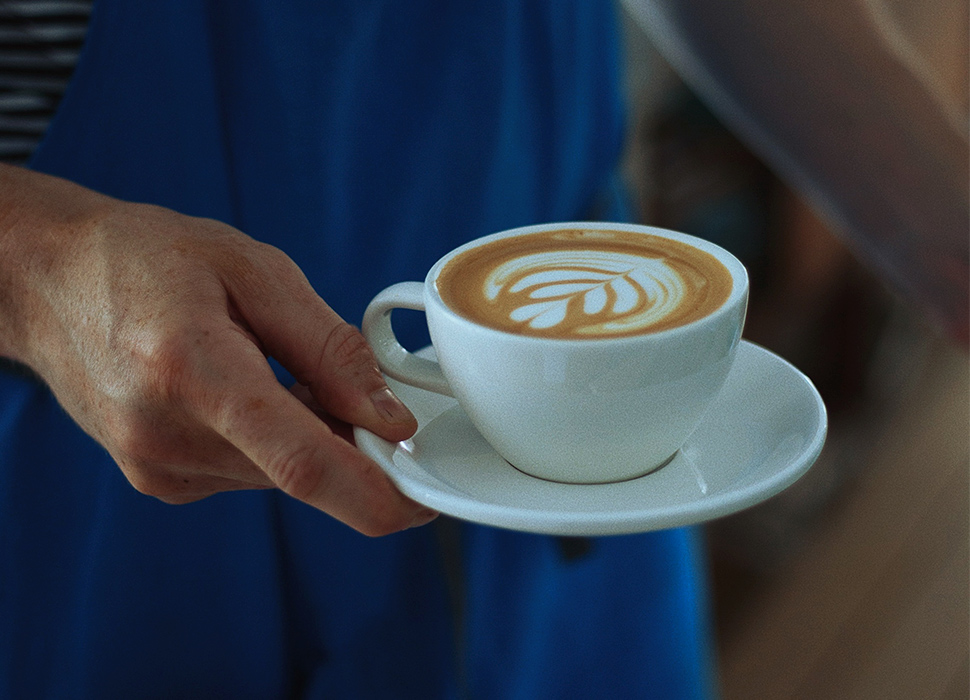 Copenhagen is the stylish centre of Danish design, both old and new. You’ll find plenty of the former in Nørrebro, which is packed with antiques shops and retro clothing emporiums, as well as one-stop shops dedicated to everything from vintage lighting (Hot Kotyr) to beautifully bound reading material from all around the world (Ark Books).

Sankt Hans Bazar and Sankt Hans Garde Antiks are both must-sees for vintage enthusiasts and those who love top quality bric-a-brac, and if you’re lucky you’ll be in town for the Ravnsborggade flea market, which sees an entire street taken over by stalls selling the best pre-loved wares. All that browsing calls for caffeine: stop by funky Darcy’s Kaffe for beans by the bag or a speciality brew to sip in situ, paired with baked goods from Danish legend Bageriet Brød. 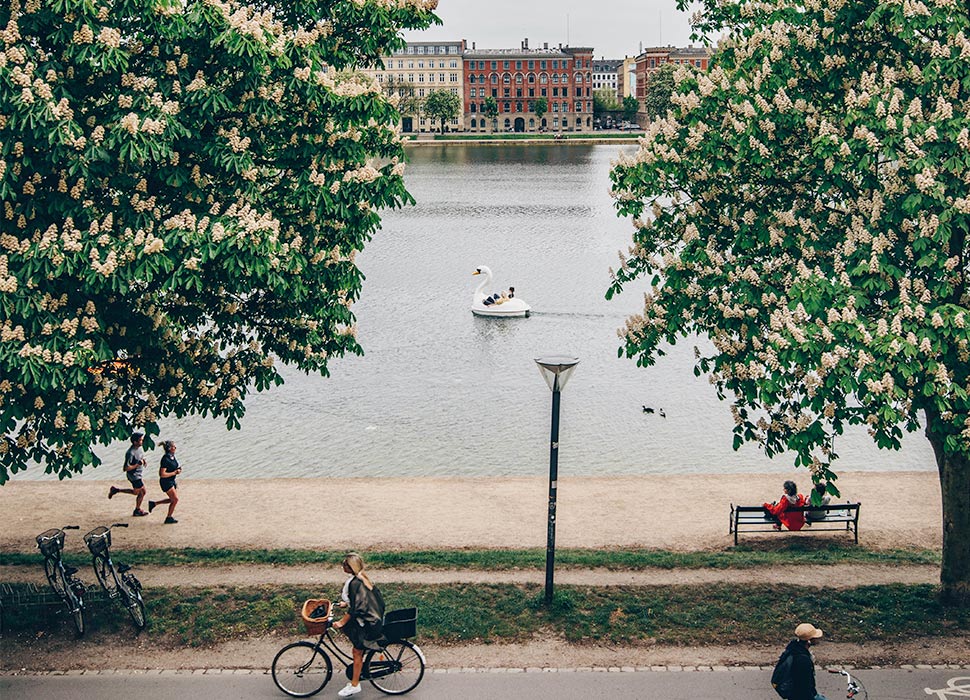 Cycling is in Copenhagen’s DNA, and one of the best ways to explore Nørrebro is on two wheels: pick up your steely steed from Donkey Republic or Baisikeli and join the 10,000 cyclists who pedal along Nørrebrogade each day. Alternatively, rent a swan pedalo from the Queen Louise Bridge and see the city from the water.

Take a breather afterwards in beautiful tree-lined Assistens Kirkegård cemetery, where Danish luminaries like Hans Christian Andersen and philosopher Søren Kierkegaard are buried – if the weather's fine bring lunch, as picnics are permitted. After all that fresh air and exercise, unwind at brewhouse-slash-brewery Brus. 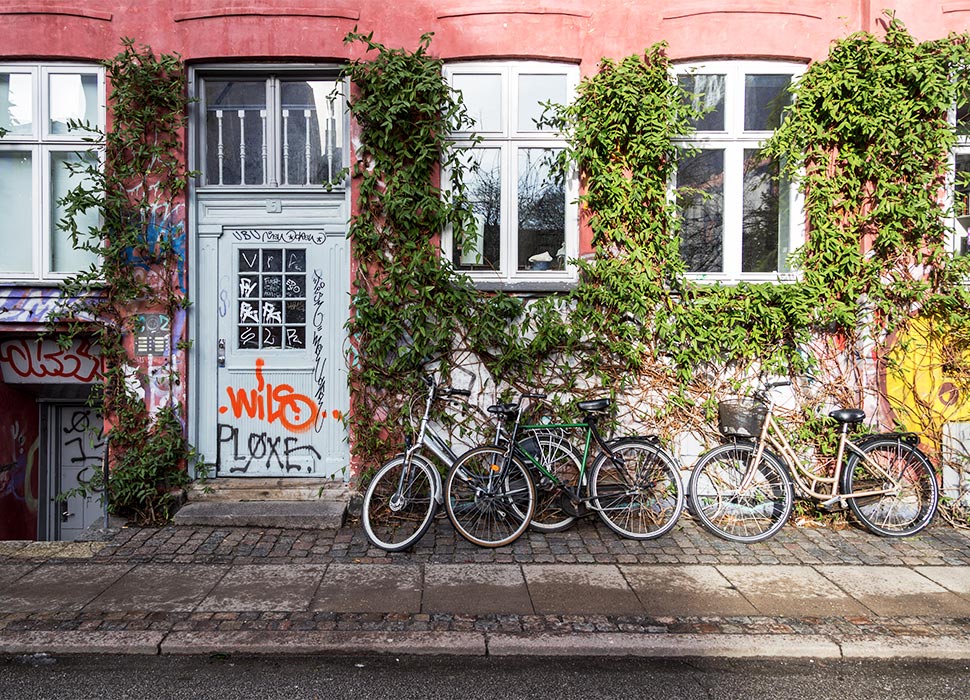 Cobbles and cycles are a standard scene in Nørrebro / Image: Alamy

The A&O has the feel of a boutique hotel on a hostel budget: as well as multi-bed dorms there are plenty of single- and double-occupancy rooms all decorated in a cosy but minimalist style, as well as some larger ones for families with fun bunk beds that are guaranteed to raise a smile. Want to explore by bike? No problem: A&O has its own fleet that guests can check out for the day.

Or live like a local in a rental apartment – Nørrebro is seriously well represented on Airbnb, with plenty of mid-century charm and balconies overlooking the cobbled streets below in evidence. 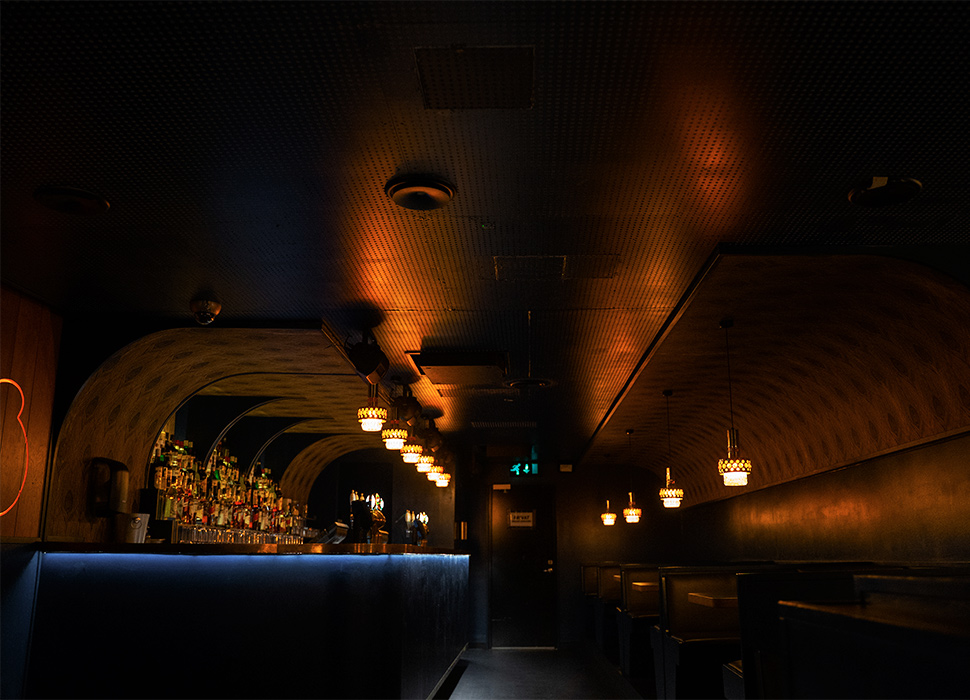 Nørrebro gets its dancing (and drinking) shoes on after dark – even the smallest neighbourhood bars tend to stay open into the small hours. There really is something for everyone: Dupong has beer and ping pong and is perennially popular with Copenhagen’s students, while Ølsnedkeren brews its own beer (the selection changes every week).

Club-wise, three-floor Rust is open until sunrise, and Bolsjefabrikken, also known as The Candy Factory, is a non-profit events space that hosts underground concerts, parties and political events – some of which are word-of-mouth only, so keep your ear to the ground. 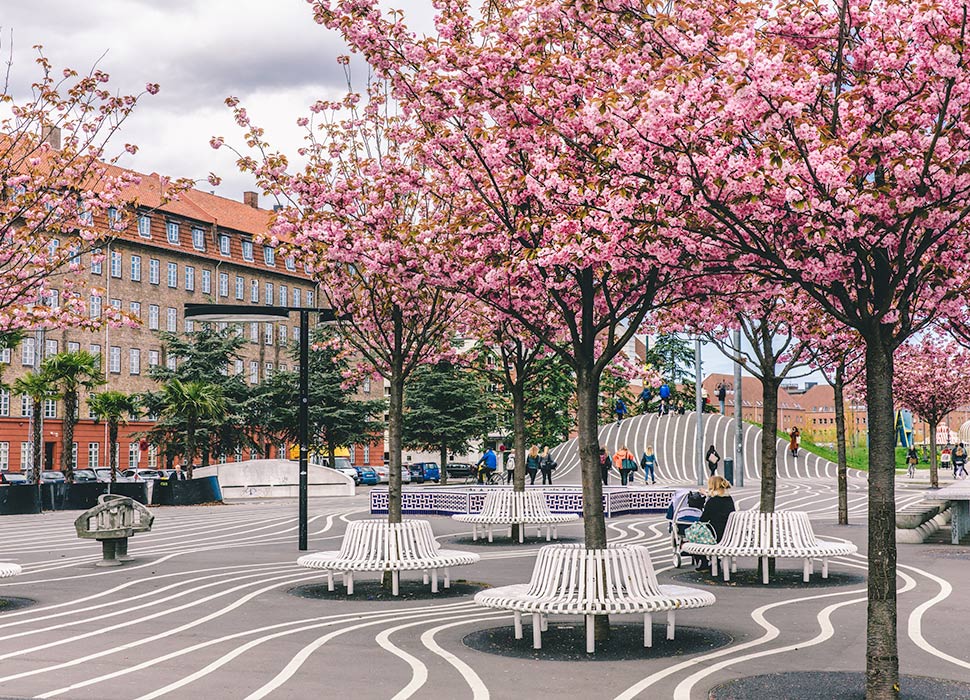 Beers, wine, cocktails? Wine, of the natural variety (natch) at stylish but unstuffy Gaarden & Gaden on Nørrebrogade, which has an enviable cellar overseen by a team of friendly experts, and also does a nice line in speciality beers.

Dress code? Whatever takes your fancy – anything goes here. If you’re looking for an excuse to don some retro finery, though, consider this it. And don’t forget to pack your cycling helmet and clips for your trousers.

Friendly locals? Ja! Copenhagen is regularly voted one of the world’s friendliest cities, alongside the likes of Dublin, Glasgow, Vancouver and Melbourne.

Claim to fame? Grød on Jægersborggade kickstarted the trend for bougie porridge cafés when it opened in 2011. Breakfast toppings including chestnut purée, dulce de leche caramel, mango, matcha and chocolate, and at lunchtime and into the evenings there are delicious savoury grain dishes to enjoy.