Pull your own steins at one of Prague's steamy beer baths / Image: Beer Bernard Spa

The best beer experiences in Prague

Boozy bike tours, banging breweries, soothing spas and nautical craft bars – these are the best places in Prague to tie one on

Pull your own steins at one of Prague's steamy beer baths / Image: Beer Bernard Spa

Drink in the vibes at Bar Cobra 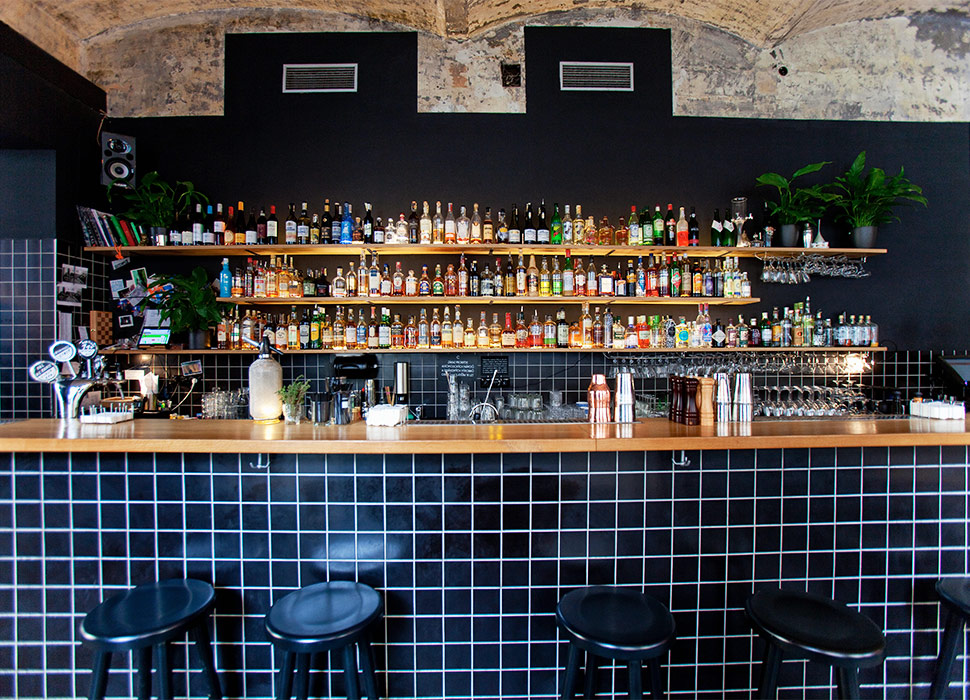 In a city of trad drinking holes, Cobra is king / Image: Alamy

There are plenty of self-consciously cool Prague bars that promise good times only to deliver snake oil. Yet Cobra, a newish but much-loved spot near a major tram crossroads, shouldn’t slip you by. Serving high quality, local brews – with rather more emphasis on ale than you’d expect around these parts – the team here also doles out knockout nosh with a vaguely Asian slant (plus burgers for when you’re feeling basic). Groovy lighting, understated decor, gallons of the good stuff... there's loads to get your fangs into here.

Hop on a beer bike 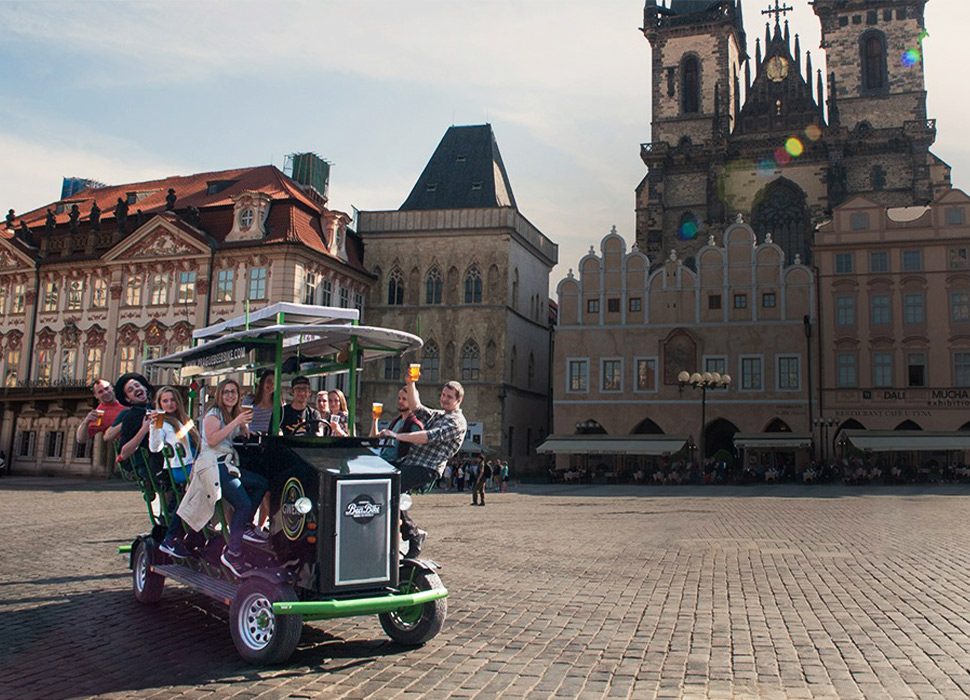 You gotta pedal for your pilsner on this city beer-bike tour / Image: prague-beer-bike

Everybody knows the best way to get around a new city is by bike. So, quite naturally, an even better way to get around is on a bike with up to 15 mates, unlimited lager and a genial host. Prague Beer Bike is an inspired opportunity to both pile on, and work off, those stubborn pilsner calories as you zoom around the pretty medieval heart of the city. You’re even allowed to blast your own tunes through the amalgam bike/bar's on-board sound system, and catch some fun photo ops – once your squad really gets rolling, that is.

Tap into old wisdom at the Czech Beer Museum 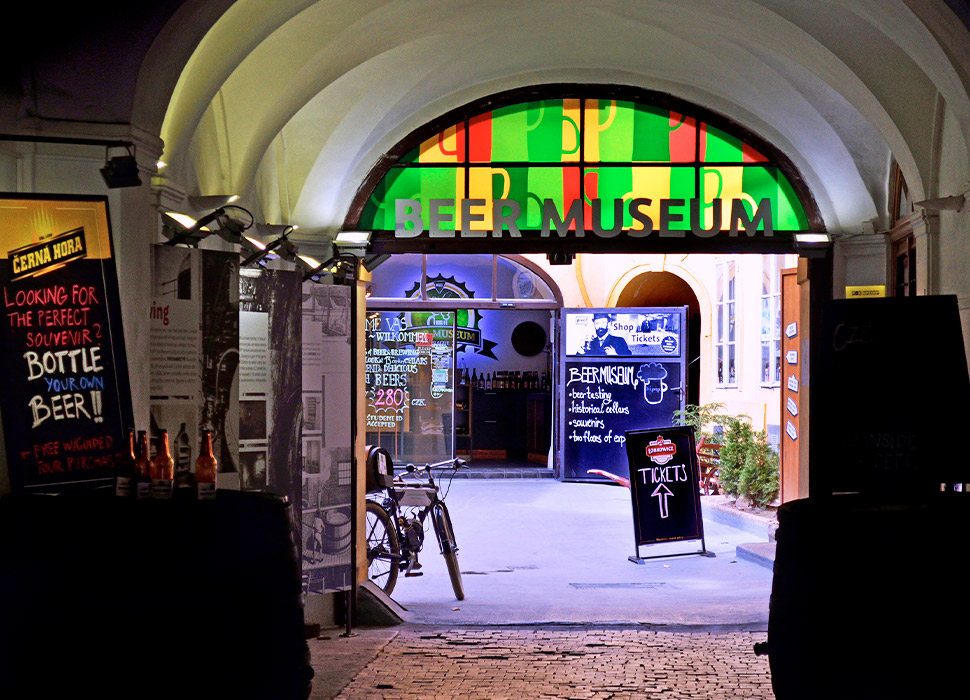 Get heady with booze smarts at this alcoholic institution / Image: Alamy

Czech folk drink more beer, per capita anyway, than any other nation on earth. So they know a thing or two about the golden stuff, suffice to say. Learn all about the history, the culture and the process that goes into every foamy mouthful at the Czech Beer Museum, set in an agreeably old-school cellar replete with informative displays and artefacts. Yeah, there’s a tasting at the end, and you get to walk away with your own personalised bottle. Educational, fun, and you get a tad tipsy? Cheers to that.

Booze up at T-Anker Bar 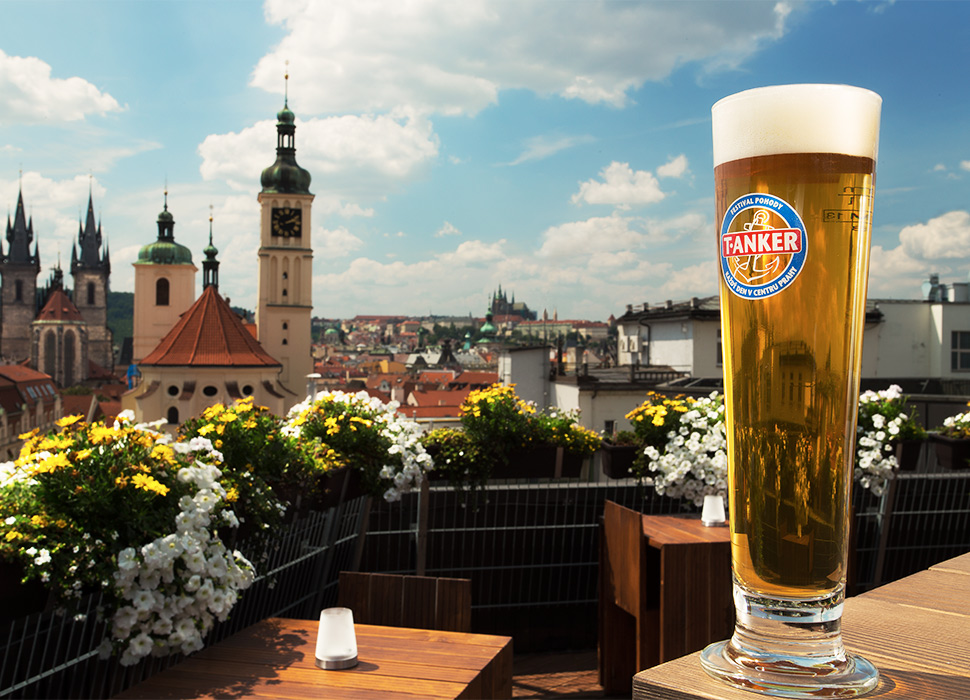 High up on the rooftop of the spectacularly un-lovely Kotva department store is a 650-square-metre skybar where you can really get stuck into some quality brews. No fewer than 12 rotating taps dole out the best of the local beer scene – labels like Purkmistr, Permon, Únětický and Albrecht all included – while you gaze thoughtfully out over the sights of central Prague, not least the world-famous astronomical clock. The best pub in Prague? It’s definitely up there.

The name literally means ‘boat brewery’, and that neatly sums up exactly what this blessed vessel anchored under the Štefánik Bridge is all about. With 13 brew vats on board, drinkers get the novel experience of swaying on the gently lapping Vltava river as they sup a local schooner, from the light ‘Legie’ pilsner to the dark, rich ‘Monarchie’. The upper deck serves up hearty, salty Czech grub – think wild boar, rich goulash and so on – or if you’re less inclined to fill up on stodge there’s a snacky, cold-meats vibe down below. It’s the hull caboodle.

Go all out at Letná Beer Garden 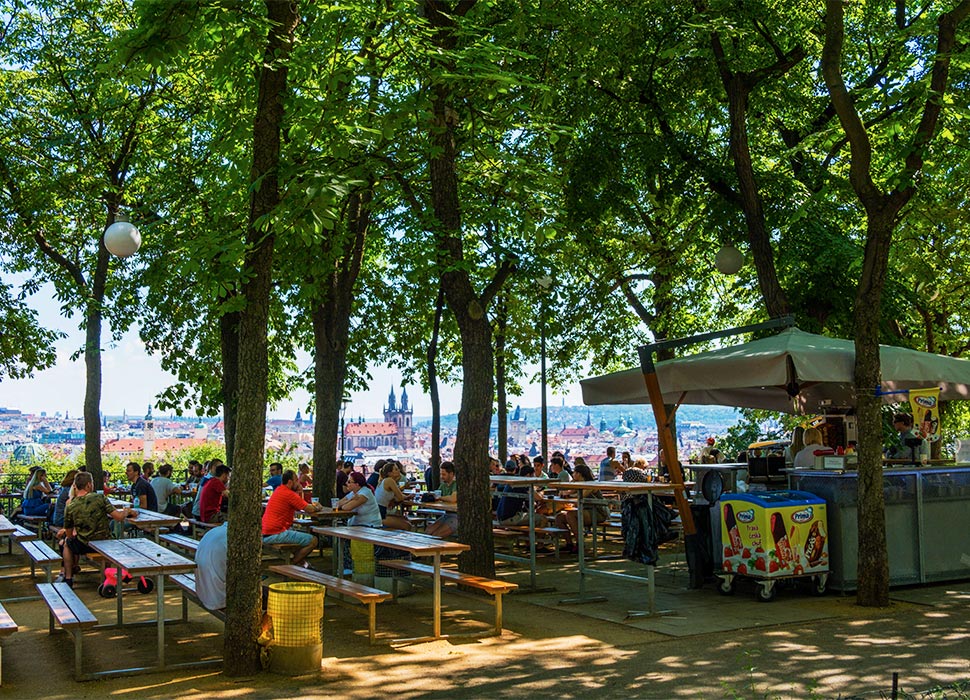 As heavenly a sesh setting as you’ll ever likely encounter, Letná Beer Garden is a clutch of several dozen benches set out under a grove of chestnut trees in a corner of Letná Park. Schlep over here with a gaggle of good chums and take turns grabbing rounds from the nearby vendors, who sling great beer, cider and old-fashioned stomach-lining snacks. The views over the Old Town are pretty spectacular too and yes, there are restrooms.

Sup like a statesman at the The Golden Tiger 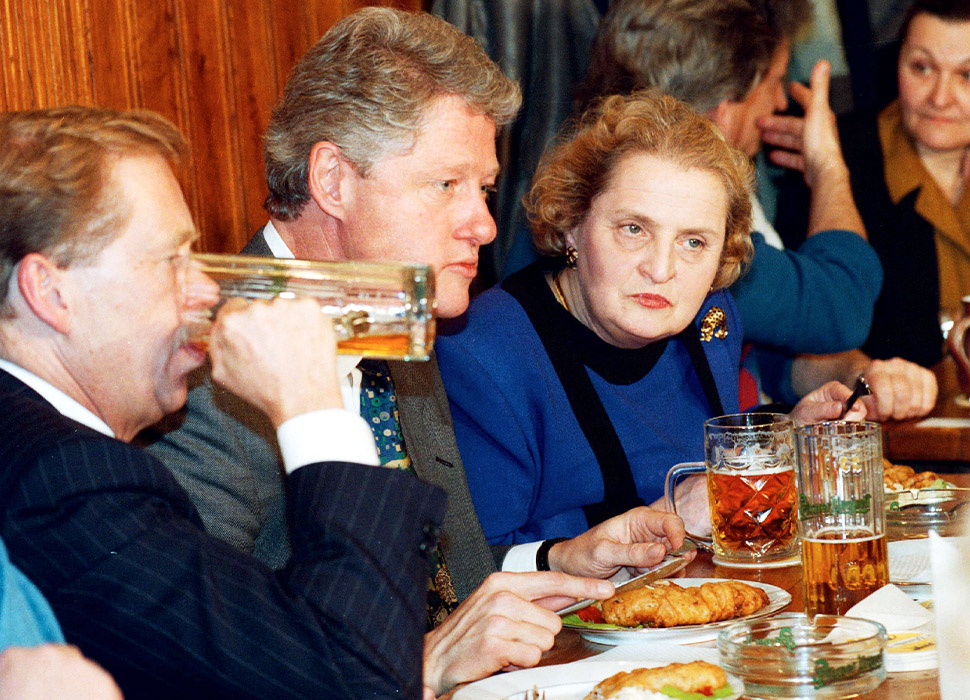 Bill gets the pints in at is purrr-fect boozer / Image: Alamy

Czech literary bigwig Bohumil Hrabal wrote powerfully of the atmosphere that infuses this venerable city-centre boozer. And despite being very much on the tourist radar, it retains its classic charms – note the swaying ranks of grizzled old timers lined up at the bar putting the world to rights. And as well they might, as the world really does come to them from time to time. No less a figure than Bill Clinton – while in office, mind – enjoyed a few cheeky brewskis in here accompanied by former Czechoslovakian premier Václav Havel. Pro-tip – the in-house beer cheese very much helps this tiger earn its stripes.

Embrace your inner soak at a beer spa 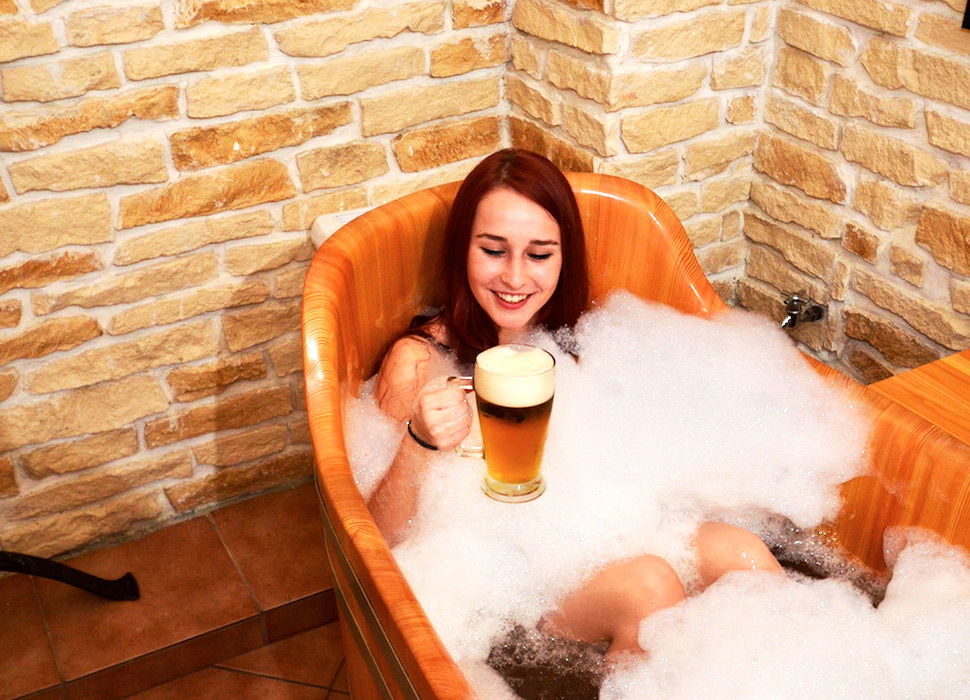 Bathing in beer is totally a thing – in Prague, anyway. There’s even science, of sorts, that backs up the claim that it can help rejuvenate your skin, improve your circulation and even (wait for it) help you detox. Test these heady claims for yourself with unlimited pints at the award-winning Beer Spa Bernard (at 644 Týn); with a souvenir bottle of beer shampoo from brick-lined Original Beer Spa (at 3 Rybná); or with gourmet sausages and a massage at the Grand Relax (at 1052/42 Na Poříčí). Best hop to it.

Hone your craft at the Craft House 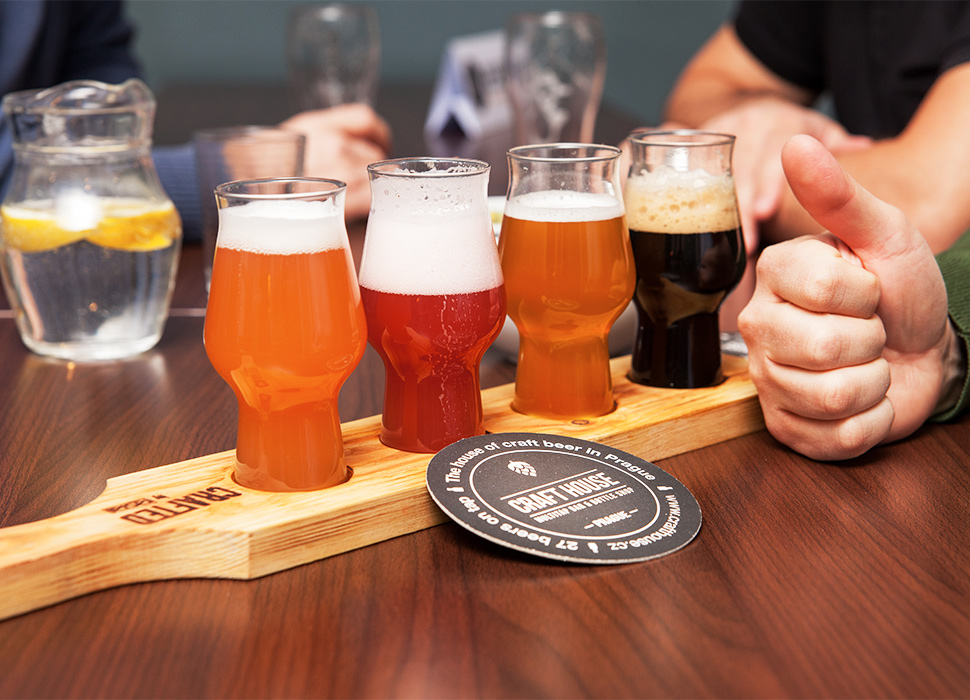 Hop to this nifty craft bar for fab flights

Prague isn’t exactly famous for its craft scene – it’s literally the home of classic no-nonsense pilsner, and many excellent spots still proudly have no truck with fancy IPAs and the like. Still, when they do emphasise smaller, kookier brews they do it in fine style. Like at Craft House, a 27-tap temple to all things hopped and groovily packaged. It's not for the faint of heart, but check out the separate ‘Imperial Bar’ offering, with potent Russian imperial stouts and mega-strength 'Quadruple' IPAs. There's a very respectable bottle shop, too. It's enough to make your head spin.

Get medieval at U Medvídků 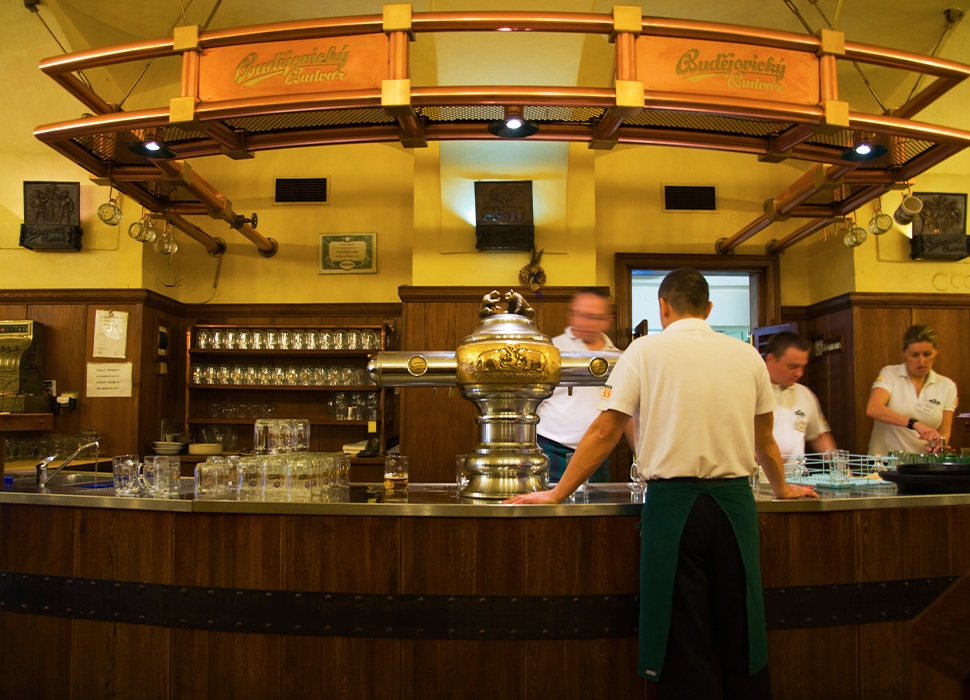 Archaic vibes and esoteric lingo are on the menu at U Medvídků / Image: Alamy

The brewery at this recently converted hotel has been whipping up great casks of everybody’s favourite tipple since 1466. During that time they’ve learned a thing or two about brewing, as you might expect, so alongside fun novelties like the beer ice cream served with dinner, patrons can also take on the traditionally made ‘XBeer 33’, billed as ‘the strongest beer in the world'. Not by ABV, mind – although it does clock in at a punchy 12.5%. But the beer’s so-called ‘wort density’ is a lofty 33 °Plato. Go and ask for yourself what that means at this truly medieval institution.