Neratov is in the beautiful Hradec Králové region / All images: Dave Imms

A small community in the Czech Republic has become a model of inclusivity, helping people with physical and mental disabilities really thrive. We spend a day in Neratov

Neratov is in the beautiful Hradec Králové region / All images: Dave Imms

David Havlíček is proud. He holds up a glass of golden beer and asks us to try it. It’s zesty and delicious. “It’s great that tourists come here,” he says. “They keep buying our beer and they really like it.” It’s the latest in a range produced at Neratov brewery, high in the Eagle Mountains of the Czech Republic and it comes with a story.

I’ve made the two-hour drive from Prague to this beautiful and little-known area to discover what’s so special about Neratov. These mountains have long been a place Czechs come to hike, cycle and picnic among pine forests and sunflower meadows – but why is this small alpine community attracting a very respectable 40,000 visitors a year? 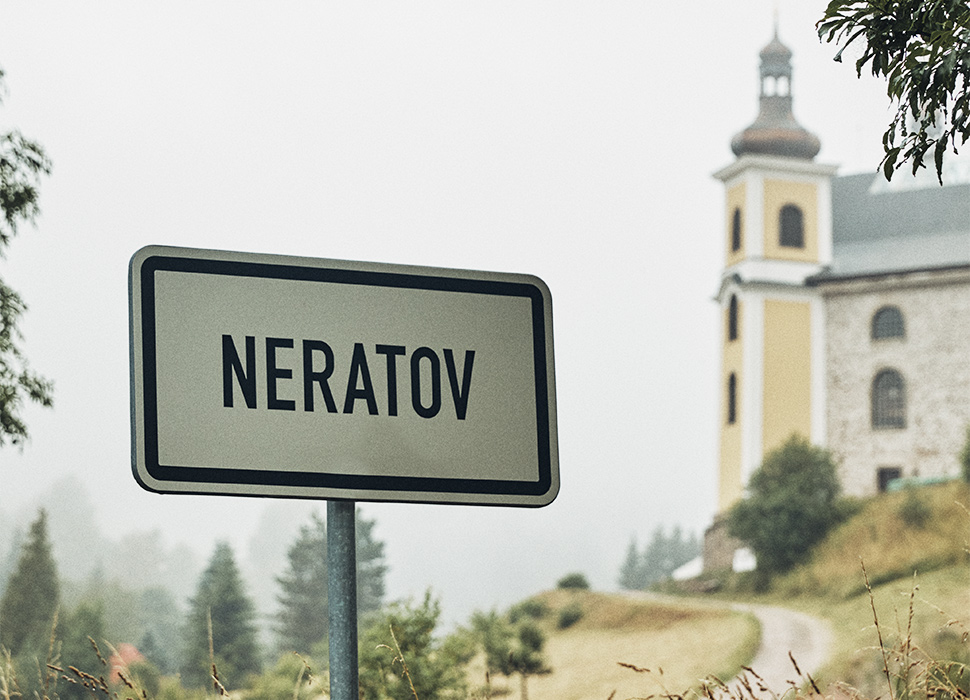 The village is about two hours' drive from the Czech capital, Prague

David moved to Neratov four years ago. He has learning difficulties, and spent most of his life in institutions and psychiatric wards. Sent to a children’s home aged eight, after a tragic accident killed his younger brother and his mother couldn’t cope, he was locked away and put on medication for the next 14 years, half-living a childhood he will only describe now as “not exactly lovely”.

What’s unique about Neratov is that 80 percent of those who live and work here are, like David, living with mental or physical disabilities. The community-based Neratov Association now employs 250 people, making it one of the country’s largest employers of people with disabilities. 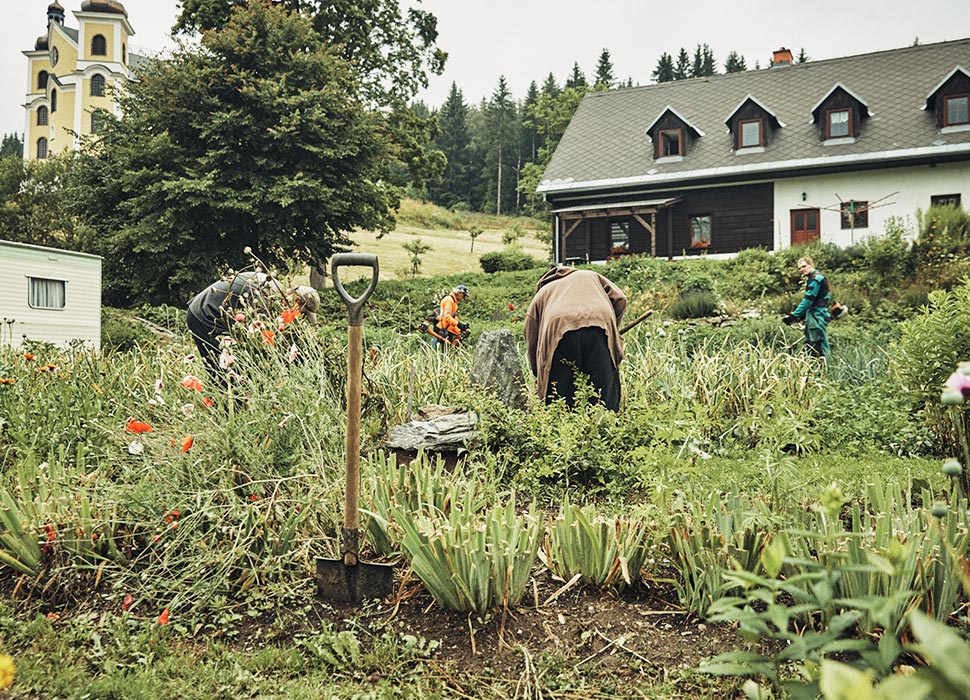 The town's market garden provides produce for the pub

Czech society has had a complicated relationship with disability. After the struggles of WWII, Communism – with its notion of ‘perfect’ physical ideals – suffocated the country for a further four decades. Think of those classic Soviet images of strong-jawed workers staring determinedly towards a bright socialist future. Disabled people were condemned as dangerous, mad or destructive, with propaganda spread that disability was infectious. Thousands were removed from their families and shut away in asylums for years or lifetimes. Many didn’t survive.

This November marks the 30th anniversary of the Velvet Revolution, the final overthrow of Communism in the former Czechoslovakia. But the new Czech Republic struggled to find a way to deal with those who had been shut away. Through the dark times there was a beacon – Neratov. Employees tend the village’s communal gardens, growing vegetables to make meals served in the local pub, with the surplus sold for profit. They receive training in pottery, ceramics and weaving, so they can create shawls, baskets, mugs and pots for sale in the local shop and to fulfil orders from businesses all over the country. 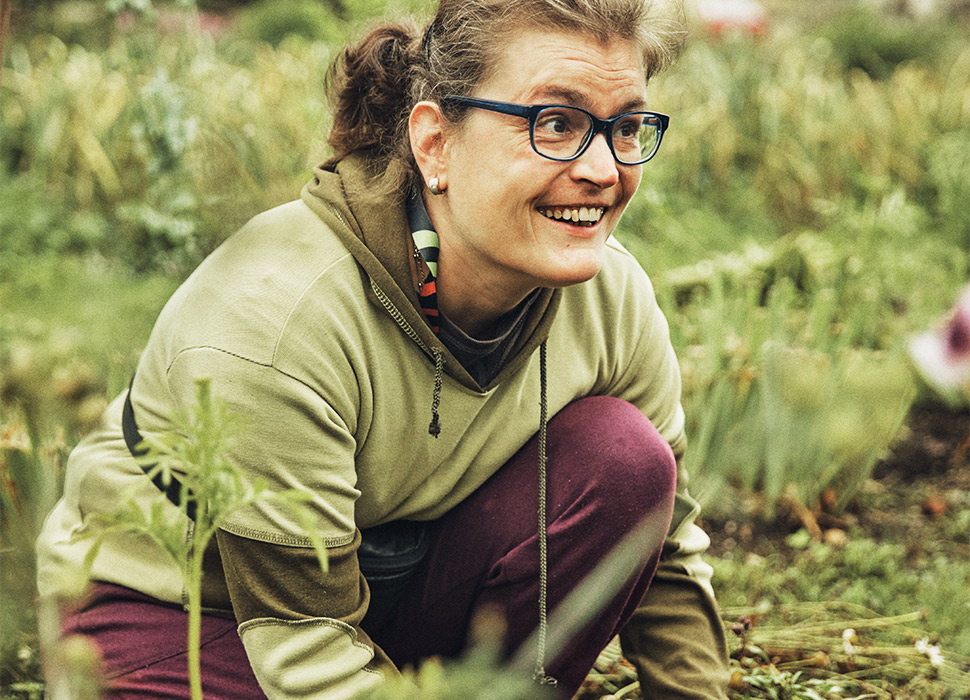 Resident Kvetoslava works in the garden

They are growing by the day – when they took part in a national Facebook Live campaign last year to sell their goods as Christmas presents, over 500 orders were placed. When the Czech Republic’s biggest bank featured the village in a national advertising campaign, visits to the region skyrocketed.

It’s easy to see why visitors make the trip. Tucked into the crook of a gently winding road, Neratov is dotted with Hansel and Gretel cottages, their neat gardens garnished with lavender and pots of bright geraniums. A river tumbles through the valley, while on the hill a graceful, yellow-breasted church with an unusual glass roof overlooks the village below.

Thirty years ago, Neratov didn’t exist in any recognisable form. It had been ruined and abandoned after WWII. That handsome baroque church, a sacred site of pilgrimage since the 16th century, was set ablaze in 1945 by a drunk Russian soldier. 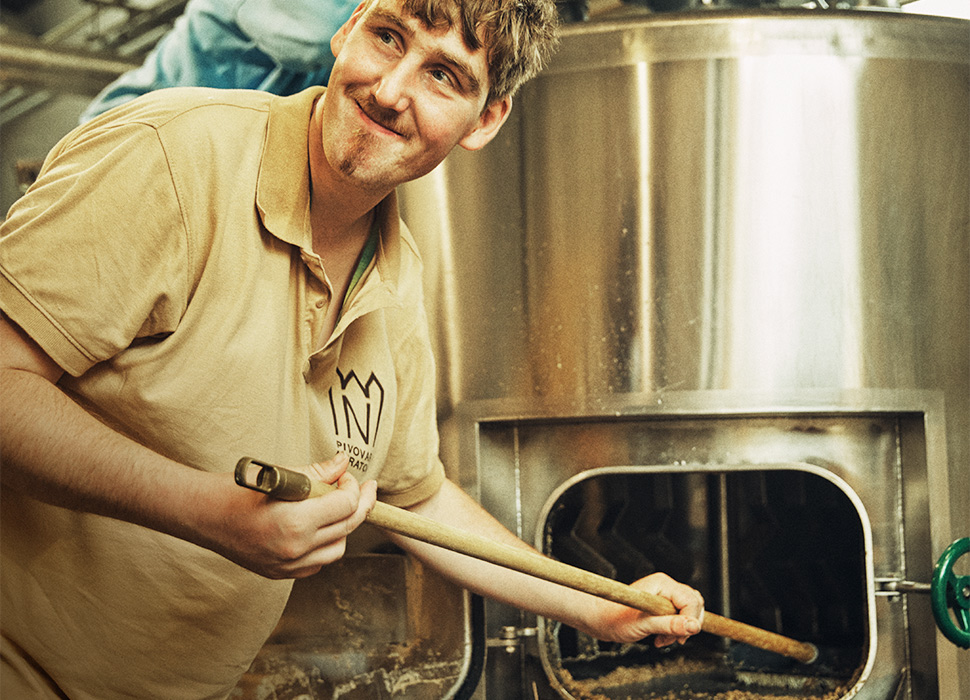 Afterwards, when the German population was forcibly expelled from the region at the war’s end, the number of people living in Neratov fell from 1,800 to just two. But in the summer of 1987, a young priest named Josef Suchár came across the crumbling village during a hike.

As warm and engaging as ever, Josef heaves open the heavy church door for me today while explaining how he instantly felt a spiritual connection with this place. “No matter how ruined everything was, I knew it was special,” he says. “There was something mystical about it. I stood inside this church, looked at the open sky and asked, ‘Dear God, is anything ever going to change with this country?’”

In 1989, Josef’s prayers were answered in the form of the Velvet Revolution. Josef could openly practise religion again and became priest of the local area – and his parish included the desolate Neratov. He made a vow to rebuild the church and with it build a new community for people with disabilities. “It was a time for new life,” he says. “We promised that we wouldn’t just talk about kindness and giving a helping hand – we would act to make life better for those most in need.” 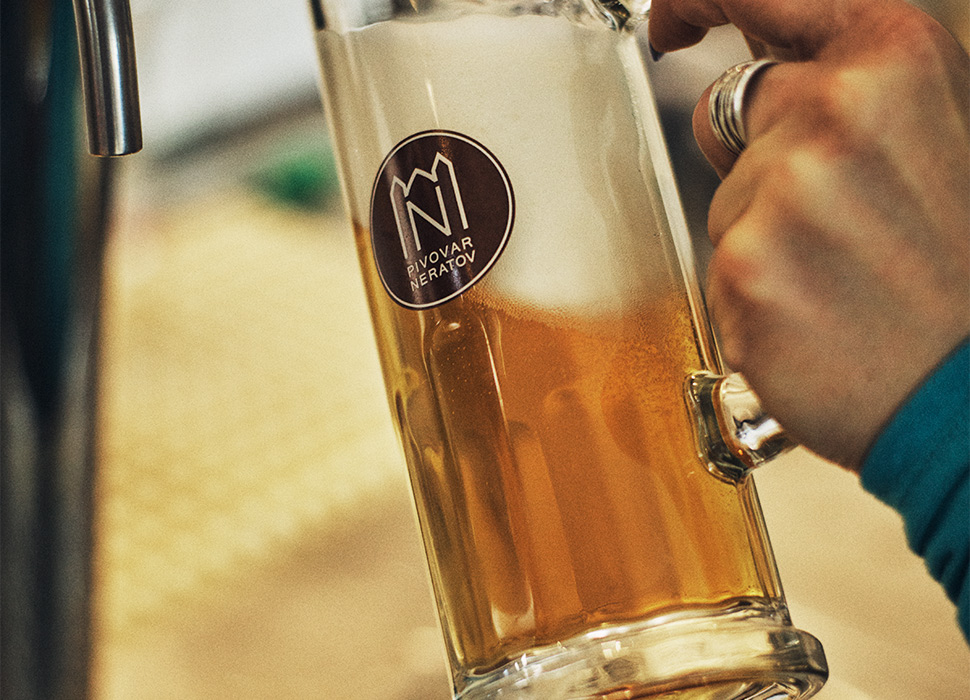 A glass of Proft lager being pulled in the village pub

Josef and I wander over to a noisy playground, where disabled kids from Neratov’s school are wholeheartedly loving summer camp. Here I meet Jana Nĕmcová, chair of the Neratov Association, who has fostered six children with disabilities over 30 years. Jana has known Father Josef since the beginning and laughs when

I ask her why she got involved. “When Josef first told us his vision, we thought everyone would just shake their heads and leave him to it,” she says, “but his passion was something else. Within a year, our family had moved here to help with rebuilding. It allowed us to follow our own dream of offering our home to children no one else wanted.”

The project grew with one important principle at its heart: disabled employees of the Neratov Association are not cogs in a wheel – they are the wheel – and they decide any future direction of the village. “They help to create everything,” says Father Josef, “and everything that’s created is here to attract people to come and spend time here. Everything is built in a way that we are not creating these spaces for people with disabilities, but with them. That’s the reason Neratov has come back to life.” 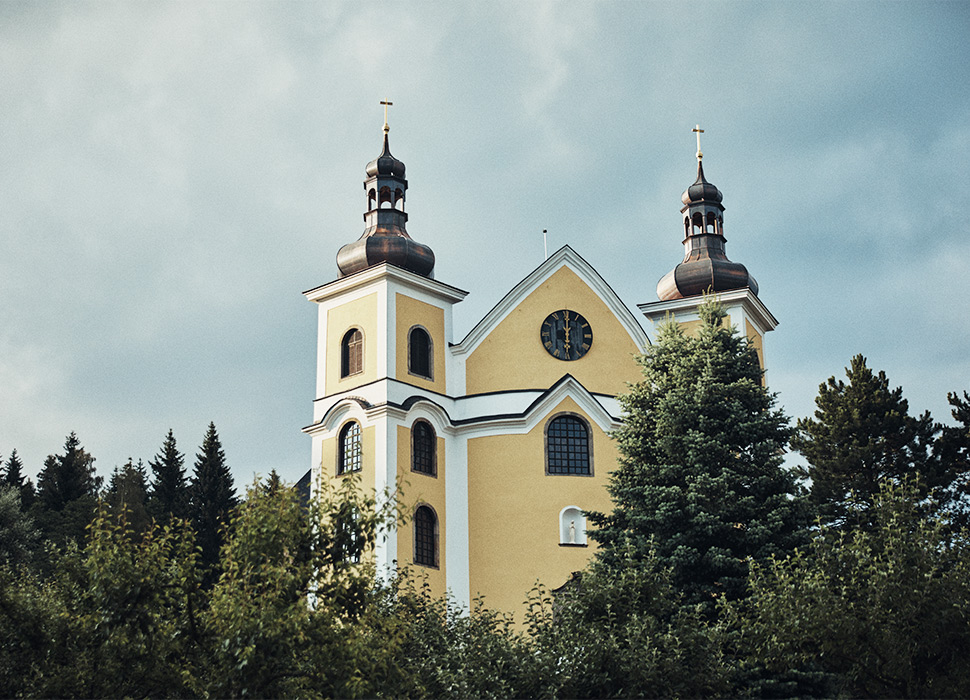 The restored church is at the centre of the community

What has been achieved is impressive. The church was rebuilt, at first by hand, and in 2007 finally receiving that emblematic glass roof to symbolise the years it stood open to the elements, its past recognised as being as important as its present. The building is always left unlocked and one evening I sneak in to experience being alone in a near-dark church. A circular stained-glass window burns deep ruby in the last rays of daylight, throwing a fiery glow over the altar. Whether it’s a deliberate design feature or simply a magical coincidence, the effect is spellbinding.

There is also David’s gleaming new brewery, and the architect-designed pub that serves Czech specialties such as pork, dumplings and potatoes, and smažený sýr, a lip-smacking wad of fried cheese served with chips. There are dormitories above the restaurant and in the former priest’s house for those who want to stay the night; and locals also open their doors to tourists. There’s a shop, some chickens, an orchard, a children’s playground and a comforting sense of the present day being just out of reach. 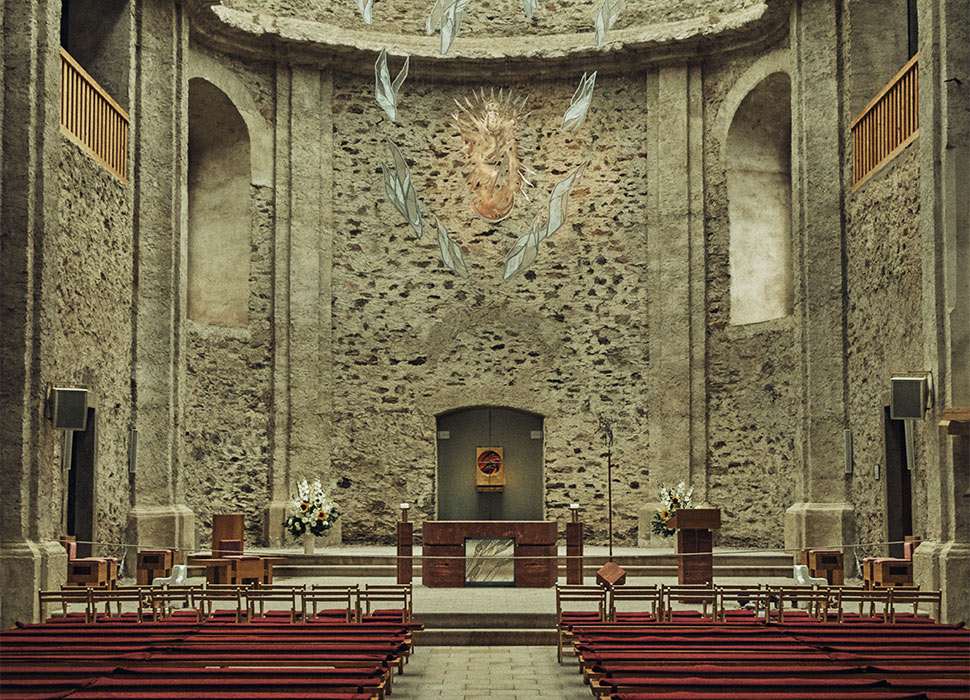 A striking sculpture in the church's interior

Nearby cycle paths and hiking routes take you directly into the Eagle Mountains, a protected landscape dotted with castles, rivers and forests. The mountains trace the border with Poland for 40km, but are still an easy drive on good roads from Prague. Attractive regional towns include Pardubice, renowned for its gingerbread, and Litomyšl, with its Unesco-listed Renaissance castle. 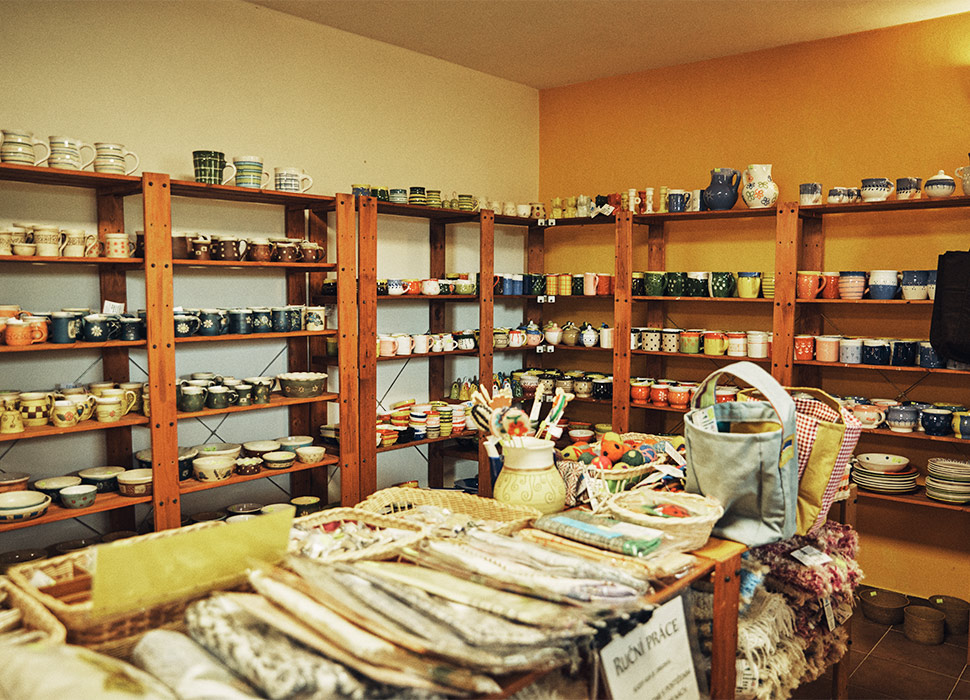 A shop sells products made in the town

These days, the Czech Republic is a thriving democracy with one of the most well-developed economies in the region. Its disability policies have come a long way – children with them are now integrated into mainstream schools and businesses are set progressive targets to either employ a percentage of people with disabilities within the workforce or purchase a proportion of their supplies from associations that employ people with disabilities. This means that the residents of Neratov, from their workshops in the mountains, can produce goods that are bought by large companies, including Siemens.

This income will go to help with Neratov’s plans for a new school and respite-care facilities, as well as an additional sheltered housing block, new restaurant and expanded shop.

All of which will, in turn, support more people like David. “I don’t want to leave this place,” he says. “My past was bad, but the present here in Neratov is perfect.”