The boardwalks and waters of Plitvice Lakes / Image: Luka Esenko/Croatian National Tourist Board

From knockout lakes and islands-within-islands to rugged peaks just begging to be clambered up, Croatia's eight beautiful national parks have something to offer travellers of every ilk. Here's our rundown of the lot

The boardwalks and waters of Plitvice Lakes / Image: Luka Esenko/Croatian National Tourist Board

Croatia may, first and foremost, be famous for its sprawling beaches and glamorous coast, but the country’s mind boggling natural beauty doesn’t stop there. Its eight national parks are home to some of the most magnificent wonders of nature in Europe – and are a must for any Adriatic itinerary.

You've got the parks down, but what about the towns? Which bit of Croatia should you plan to visit first?

And after you've plunged into that, cool off with our list of the most stunning wild swimming spots in Europe. 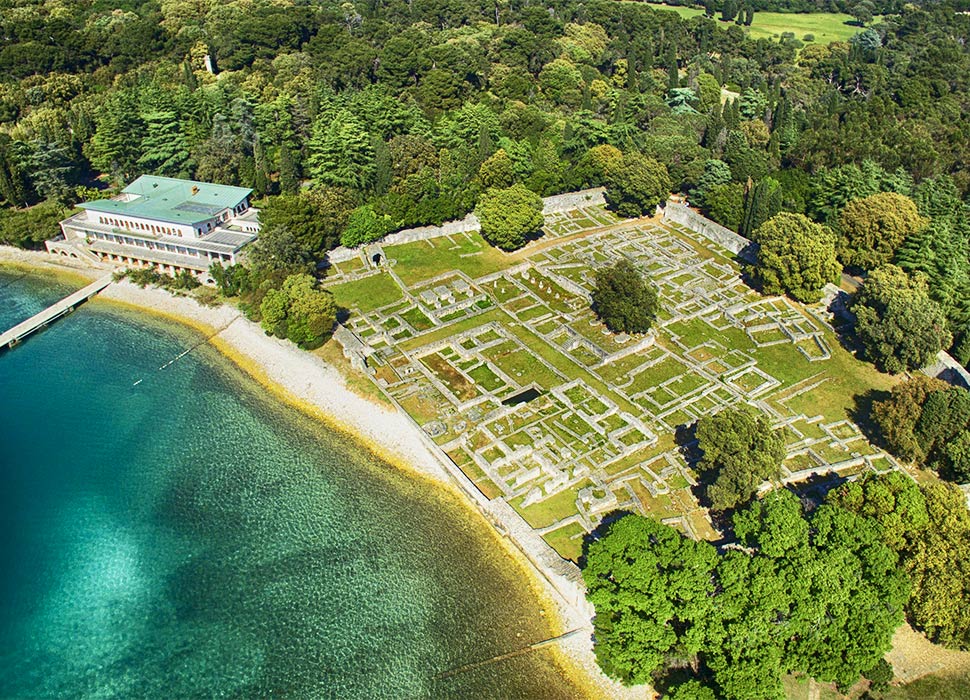 Brijuni is a hotbed of ancient intrigue / Image: Ivo Biocina/Croatian National Tourist Board

The best park for: Activity-packed family days out.

In a nutshell: On the west of the Istrian peninsula, in the vicinity of Pula, Brijuni national park sprawls across a string of large islands that have been inhabited since ancient Roman times. Its lush green trees and crystal waters have made it a firm favourite with visitors for aeons. Subsequently, it’s the most developed of Croatia’s island-based national parks, with seven restaurants, a golf course, tennis courts and a safari zone. You can even bed down in one of the period property hotels on the main island (Istra Hotel and Neptun Hotel are both tip-top).

What should I do there? Brijuni has a great network of smooth cycle paths, so bikes are a great way to get around. You can also join one of the park's extensive archaeological tours, visiting a Bronze Age hill fort, the remains of a Roman villa, a Byzantine castrum and St Mary's Basilica.

Useful info: Entry: 200 HKR, but there are a range of ticket options for different tours and guides. The park can be reached via ferry there from Fažana. 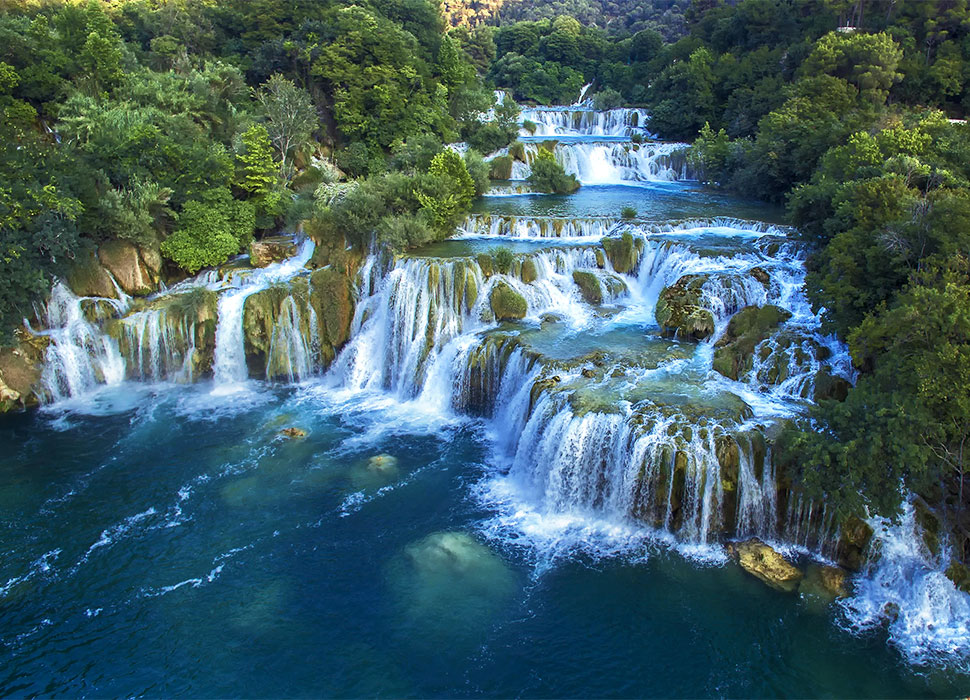 You're bound to fall for this sodden beauty of a park / Image: Ivo Biocina/Croatian National Tourist Board

The best park for: Strolling around waterfalls and watermills.

In a nutshell: Designated a national park in 1985, the waterways and waterfalls of the River Krka have been used for leisure by smart locals for hundreds of years. Its standout spot just happens to be Croatia’s most picture-perfect falls, Skradinski buk, but there's more to the park than beatific torrents. For a start, it's a history geek's dream – with charming watermills in the ethno-village, a Franciscan monastery on a tiny island in the middle of Lake Viscovac, and medieval fortresses to hike around. It was also home to the world's second hydroelectric power station, built in 1895, the remains of which you'll mosey past on your ambles.

What should I do there? The Skradinski falls receive increasingly high visitor numbers (1.3 million in 2019), so swimming has been ruled out here for the safety of the ecosystem and people alike, but if you're desperate for a dip there's a designated area at Roski falls. There are also 22 hiking trails to choose from, three boat trips along different sections of the river and a wide range of cycling options.

Useful info: Entry: 200 HKR, but discounted to 150 HKR at 4pm every day – if you solely want to see the waterfalls and miss the midday heat, this is a great option. You can also get a multiday pass, which is great for those cycling the park's 470km-long network of bike paths. 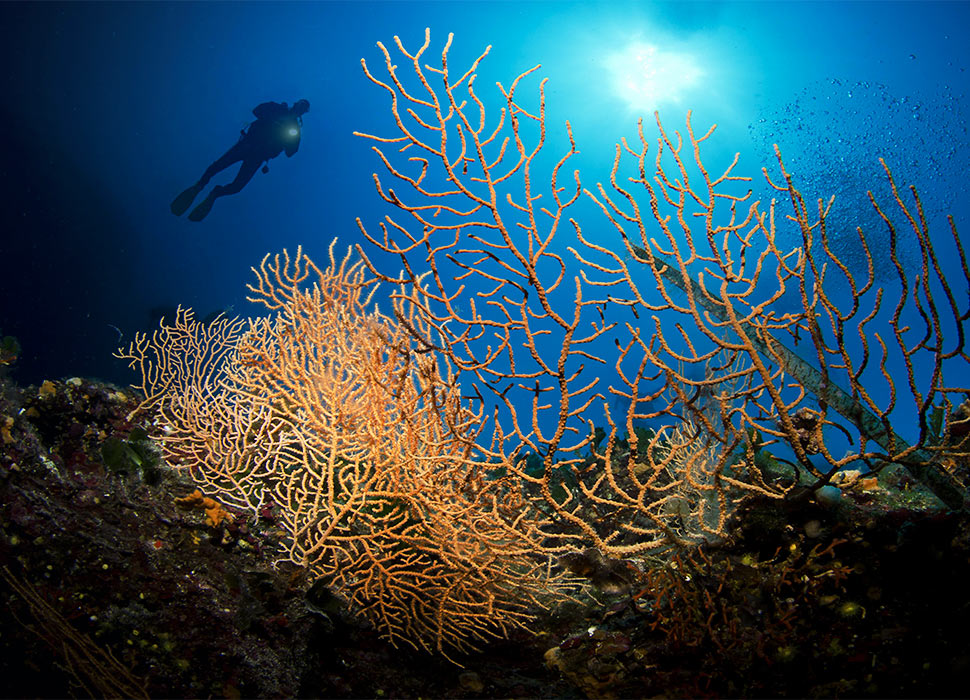 The best park for: Reefs – this is the one for diving and snorkelling nirvana.

In a nutshell: Eighty-nine islands make up this national park in the Adriatic Sea, halfway between Zadar and Sibernik in Croatia’s central heartlands. The rocky skerries may be sparse and uninhabited but the reefs around them are home to legions of fish, as well as corals, sponges and a rare, protected mollusc called Pinna nobilis (or the 'noble pen shell'). Book boat hire through the park, or from Zadar or Sibernik, and sail around this maritime paradise, happening on fine vantage points to swim and snorkel in the crystalline waters as you putter along.

What should I do there? Scuba diving is a no-brainer. Padi licensed divers can jump in, but those without the certificate must join one of the park's chosen diving companies (or stick to snorkelling). Either way, the reefs around these islets are some of the best in Europe.

Useful info: Ticket prices vary depending on how long you hire a boat and intend to stay, as water transport is the only way for visitors to visit Kornati. 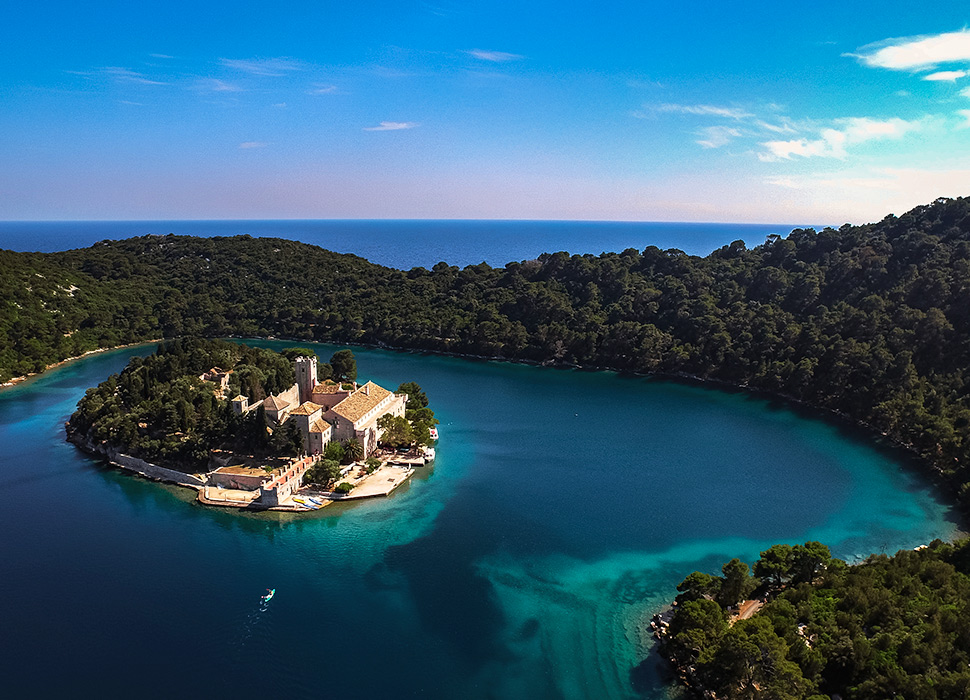 You can see why St Paul was so taken with it / Image: Ivo Biocina/Croatian National Tourist Board

The best park for: Kayaking – specifically around the island's two inland lakes.

In a nutshell: Down in Croatia’s southernmost reaches, and a short ferry ride from the mainland, the island of Mljet is its own 54km² park, complete with two dreamy inland lakes and overflowing with deep green vegetation like something from Paradise Lost. There's a distinct lack of birds here, as mongooses were introduced to the island to kill off snakes in the early 20th century, but ended up snacking on all the winged things too (and you thought they were cute, eh?). Oh, and another fun fact: an ages-old argument rages as to whether the island formerly known as Melita – rather than Malta – is where St Paul wrecked his ship.

What should I do there? Visit during the spring and summer months for swimming and snorkelling, as the lake waters are warmer than the surrounding sea. But best of all is the year-round kayaking. You can hire them from Mali Most on Mljet and paddle your way around the inner shores. 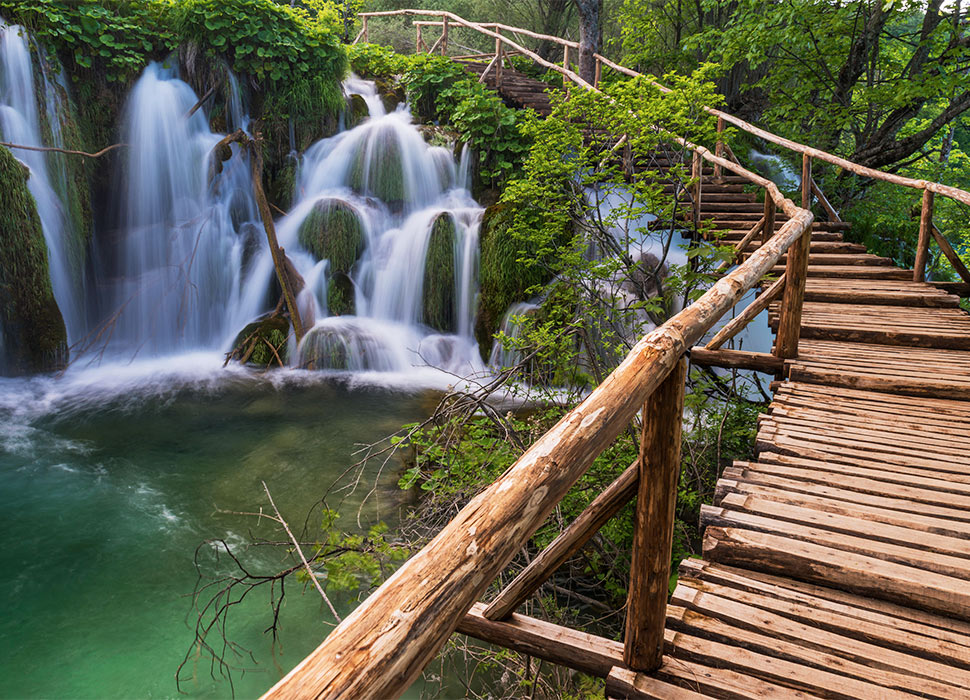 The torrents and trails of Plitvice are an Insta-fave / Image: Luka Esenko/Croatian National Tourist Board

In a nutshell: Croatia's longest-serving national park is a tourists' fave for a reason. The place is a nature lover's idyll, with over 1,200 types of plants, 300 species of butterflies and 150 different birds, and 16 huge turquoise lakes that flow into each other, connected by waterfalls of fascinating shapes and sizes. There are two entrances and eight walking routes to choose from, looping the lakes in varying degrees of length and challenge – but no matter your selection, the shining, watery levels promise to be absolutely stunning. Plitvice is a popular sight, so come off season or on a cloudy day to miss the crowds.

What should I do there? Take one of the silently gliding, electricity-powered boats that cover three routes across the largest lake, Kozjak. You could also get up with the crows to take in some bird watching before the general public arrives. 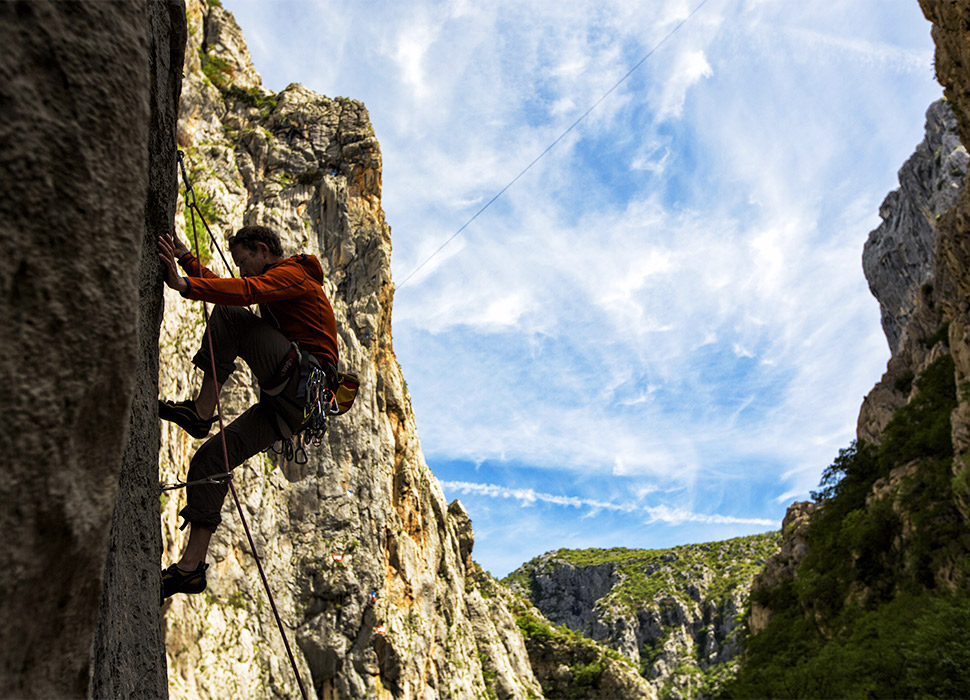 Wouldn't look down if I was you / Image: Ivo Biocina/Croatian National Tourist Board

The best park for: Croatia’s number-one spot for rock climbing.

In a nutshell: Sat along the southern side of Croatia’s Velebit mountain range, Paklenica national park is home to two stunning canyons, Velika Paklenica and Mala Paklenica, the bright limestone rocks of which are a firm favourite with rock climbers. There’s also a protected hamlet, Marasovići, which serves as a fascinating ethnography museum and a look at what life was like up here in days gone by, plus the deeply alluring Manita peć caves, which are accessible on a guided tour.

What should I do there? Well, rock climbing, obviously; experienced climbers can go solo, but beginners should head out with a guided company. Hikers and trekkers will be rewarded with incredible views of the mountains and canyons. 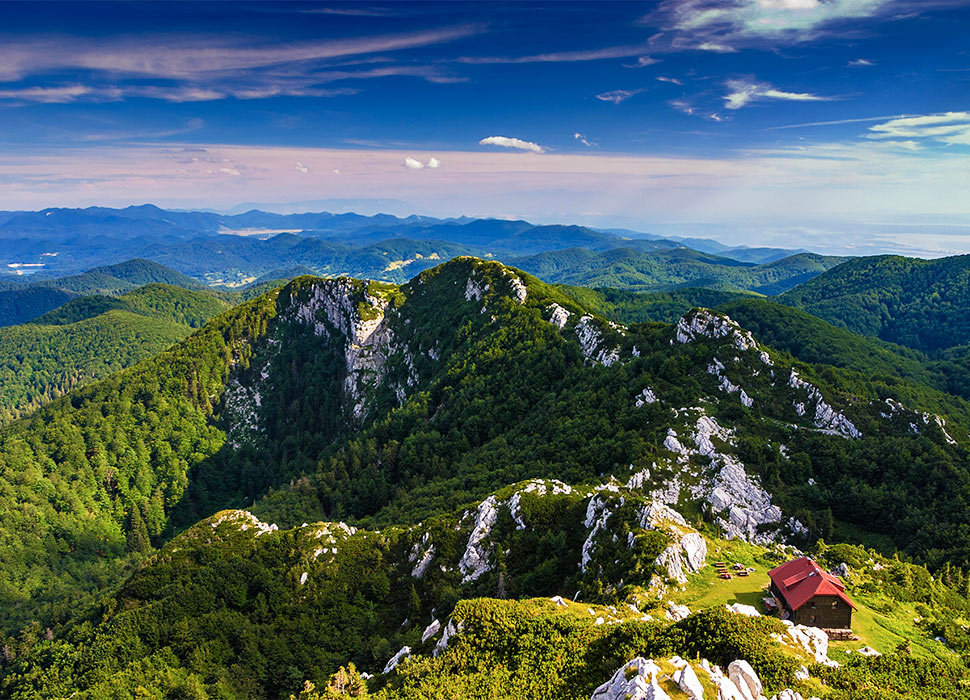 The precipitous Reisnjak park is as rugged as Croatia comes / Image: Zoran Jelaca/Croatian National Tourist Board

The best park for: Vertiginous mountains, verdant woodland and looking for lynxes.

What is it? The densely forested Risnjak national park spreads across the northern reaches of Croatia, encompassing two mountains – Risnjak and Snježnik – and terrain as rugged as it comes in the country. As it's home to an impressive array of wild animals, including bears, red deer, roe deer, lynx and wolves, many people naturally come here to look for wildlife. The River Kupa also springs up in the park, which makes it an extremely popular spot for fishing.

What should I do there? Recreational fishing in the River Kupa is allowed, but no catching your dinner. Wildlife spotting with a park ranger is a highlight; if you head this way in midwinter it becomes Croatia’s most popular skiing destination, via the local resort of Platak. 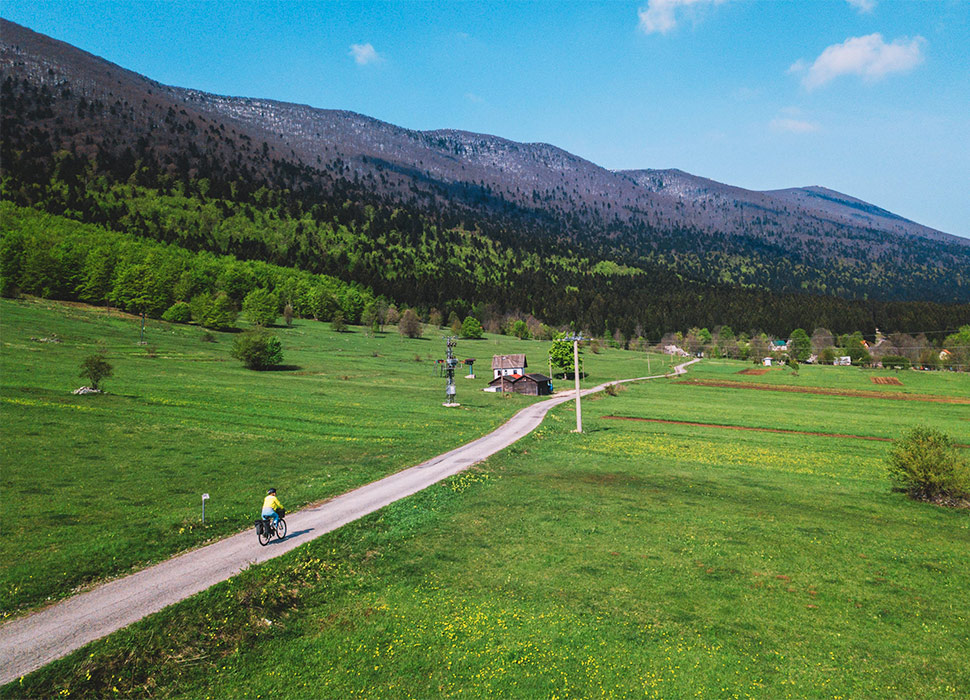 The best park for: Scenic long hikes (replete with mountain huts to bed down in).

What is it? Inaugurated in 1999, Sjeverni Velebit is known for its outstanding views, what with being sat back from the coast nuzzling the northern side of the Velebit mountain range. There’s a lot going on here, from excellent designated hiking trails that boast jaw-dropping views of the islands below in Kvarner Bay to vast botanical gardens maintained since the 1960s and of course, Velebit caves, some of the deepest subterranean drops in the world.

What should I do there? Long-distance hikers will be happy, and there’s vital on-site accommodation in shepherd’s huts so you can trek for as many days as you can muster. Cycling along the trails is allowed, as are visits to the caves and botanical gardens. Visit in spring and autumn for the perfect climate for exertion.