With a mix of ancient intrigue and cutting-edge contemporary culture, the hilltop town of Motovun might just be the jewel of Croatia's Istria region. Here's why

In the heart of rural Istria, hill-top Motovun sets itself apart from its neighbouring villages as one of Croatia’s unmissable highlights. Shrouded in mystery, with a sprawling history that dates back to the Ancient Celts, this Acropolis-esque hamlet is home to slender, winding paths that are gorgeous any time of year – whether laden with leafy greens and vibrant reds in summer, or simply a mass of soothing stone greys in winter. Just a 40 minute drive from Pula airport, the village is very family friendly as it’s traffic free and safe for kids to explore – and that's just one of the reasons why we love Motovun. Here are another eight.

Escape the crowds and lose yourself with a spot of island-hopping around Pula.

From knockout lakes and islands-within-islands to rugged peaks just begging to be clambered up – it's our guide to Croatia's gorgeous national parks. 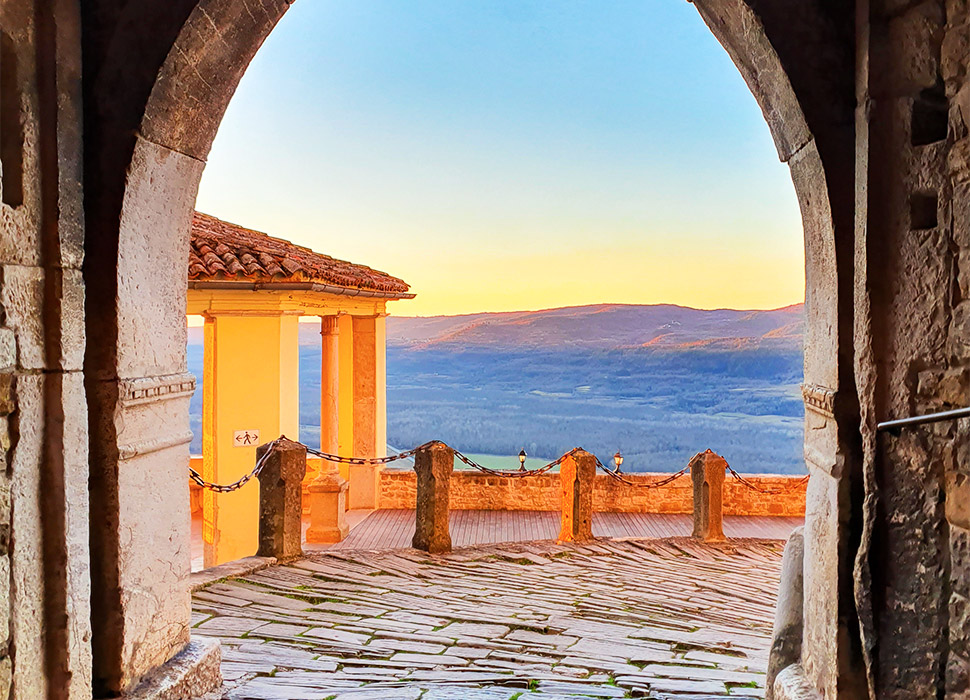 The medieval alleys and cobblestone streets of Motovun are irresistably pretty. Built by the Venetian Republic as an outpost of their Dalmatian empire in the 1200s, it’s full of lassical architecture galore and their emblem, a huge lion. The centrifugal church of St Stephen is a great example of the quintessentially Venetian Palladian style, with an adjacent campanile (bell tower) that gives guests who are brave enough to ascend, views of the Adriatic Sea in the distance, as well as the patchwork terracotta of roofs directly below.

2. The city wall views are unsurpassable 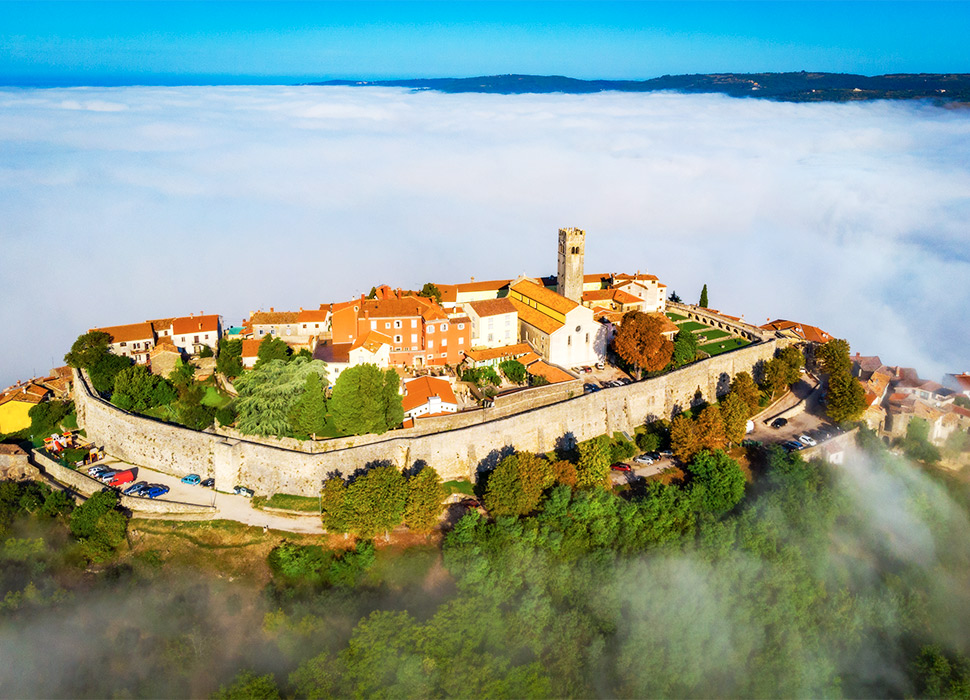 On the subject of views, taking in the vista from Motovun’s original walls is a must. These fortifications were completed in the 14th century, providing the village with an impenetrable defence for the Venetians' 500-year tenure. Today, visitors enter Motovun through the same gates that have been the only way in and out of town for centuries. Walk through the square to join the wall loop and stroll high above the surrounding fields to enjoy the stunning views of the lush Mirna Valley below.

3. It's brimming with local legends 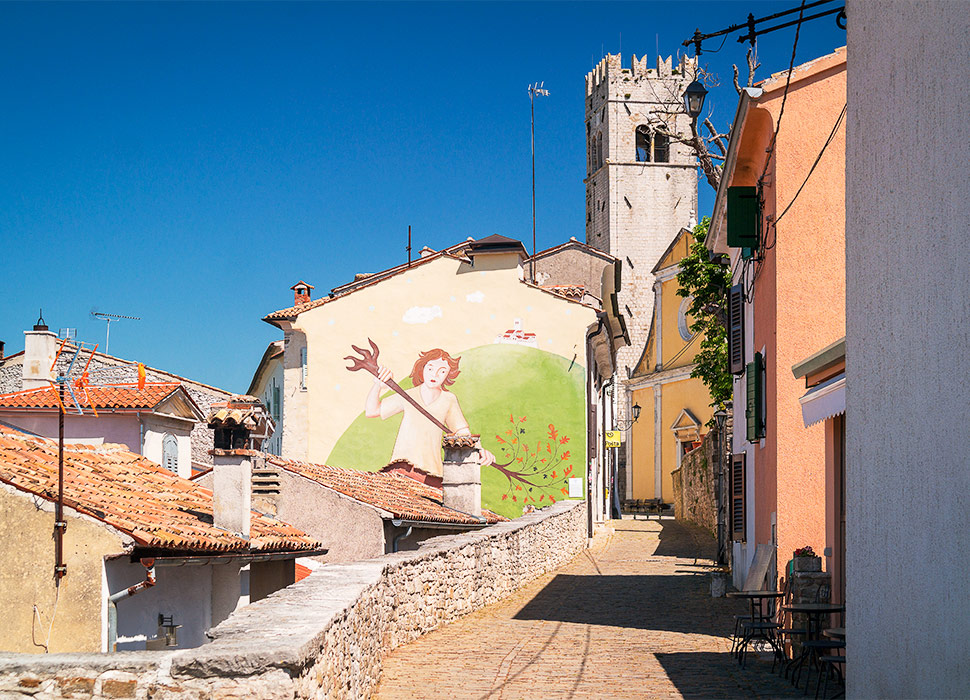 A mural based on the folkloric novel 'Veli Jože' / Image: David Matković

Motovun has quite the folklore legacy; huge giants are said to have roamed the forests of the surrounding Mirna Valley and in 1908 one of the fabled goliaths was immortalised in print. The much loved novel ‘Veli Jože’ by Croatian poet and politician Vladimir Nazor tells the story of the titular giant, who helps the local villagers with manual labour tasks. Veli Jože is remembered in a sweet mural in town – see if you can find it – near Caffe Bar Mure. 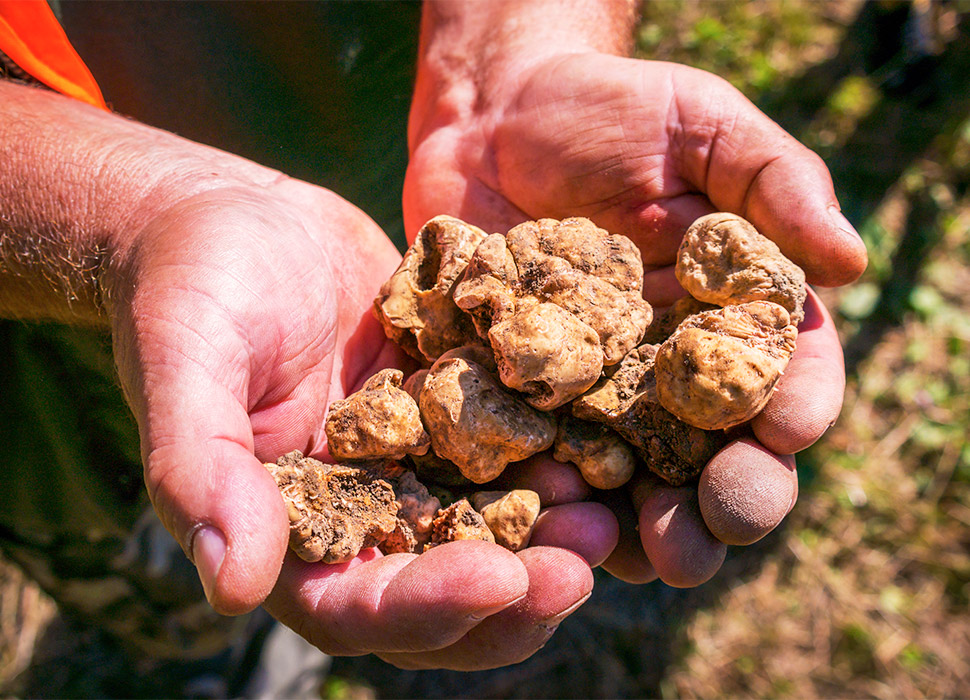 While neighbouring Italy hogs the limelight in the world of truffles, devout foodies know that Istria holds the real crown. The rarest white truffles in the world, Tartufo bianco d'Alba, grow in the forests of Motovun from October to February, while delicious black summer truffles are dug up from May to September. You've never tasted such incredible, but more importantly, affordable truffles – being dug locally cuts out the middleman and taxes. Trying the truffle pasta at Pod Voltom, whose terrace offers the best dinner views in the village, is a Motovun must. 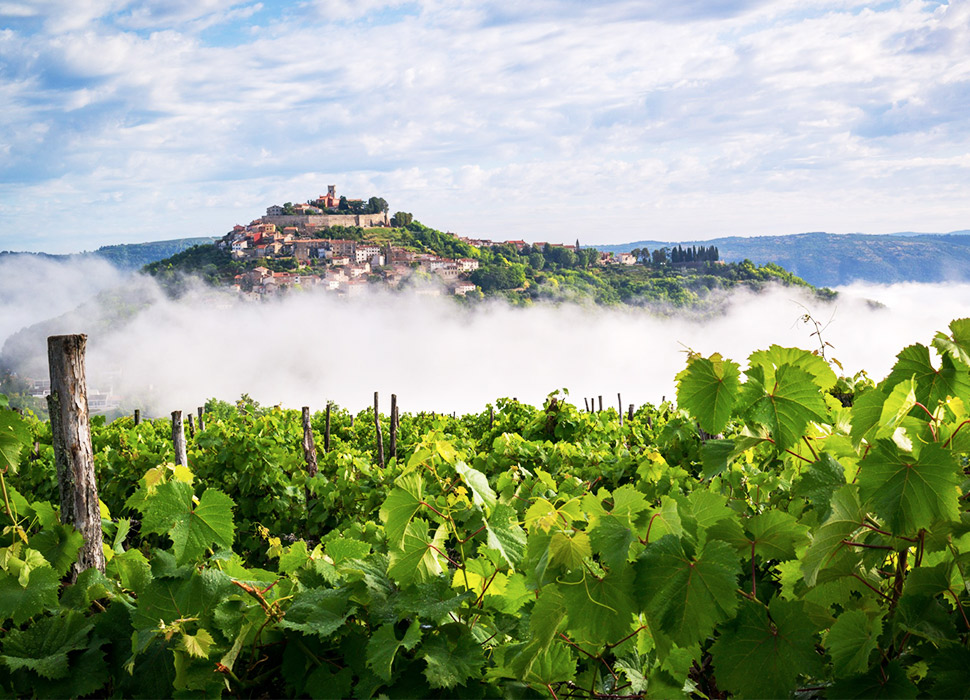 Motovun vineyards are responsible for some of the region's finest varietals / Image: David Matković

With a viniculture dating back to the time of the Ancient Greeks, a temperate climate, and four different soil types, Istria is home to a diverse range of world class wines. It’s no longer a secret that the region is wine lover’s heaven. Motovun is a prime location to enjoy a glass of the local Malvasia or heady Teran, in B5 Wine Bar, the only dedicated wine bar in the village centre. You can also take a tasting tour at Roxanich winery at the foot of the hill, where the natural organic wine from their vast cellar has fast become a hit. 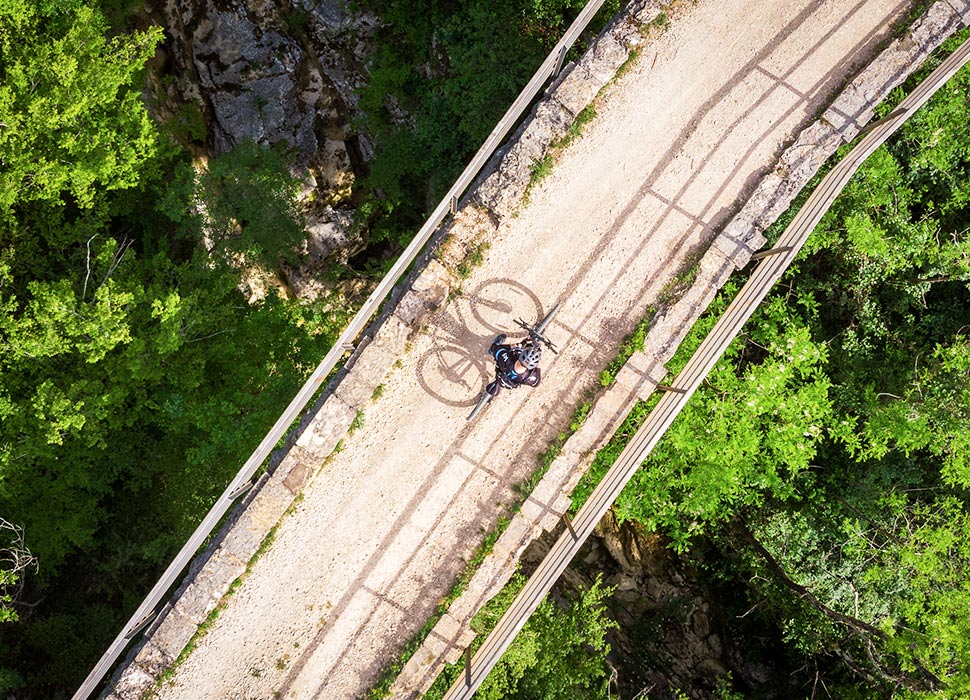 A recently revived, enjoyably unusual cycling route known as the Parenzana passes through Motovun. The former narrow-gauge railway route linked the port of Poreč on the Istrian coast with inland villages, before heading north up into Trieste, and was operational between 1902 and 1935. The disused track has now been spruced up and is a picturesque affair, passing over viaducts and through rural villages. While the terrain is well maintained, mountain bikes are recommended here – best leave your Brompton at home. 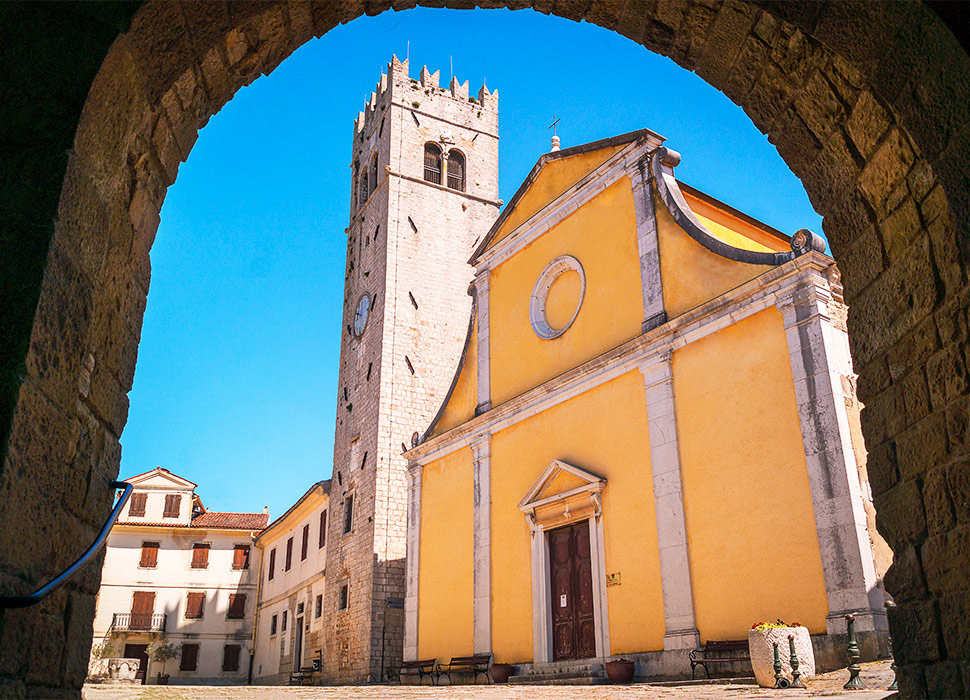 Whether you’re an expert in all things esoteric or skeptical of the unseen, you’ve probably heard of ley lines. Not a million miles away from the ancient practice of feng-shui, ley lines are believed to be channels of positive energy, recognised by ancient civilizations such as the Celts, who built their towns and monuments upon them. Motovun was established by said Celts and it’s thought that three of Istria’s ley lines pass through its square, meeting under the bell tower of St Stephen’s church. Have a seat on the bench outside and see how you feel. 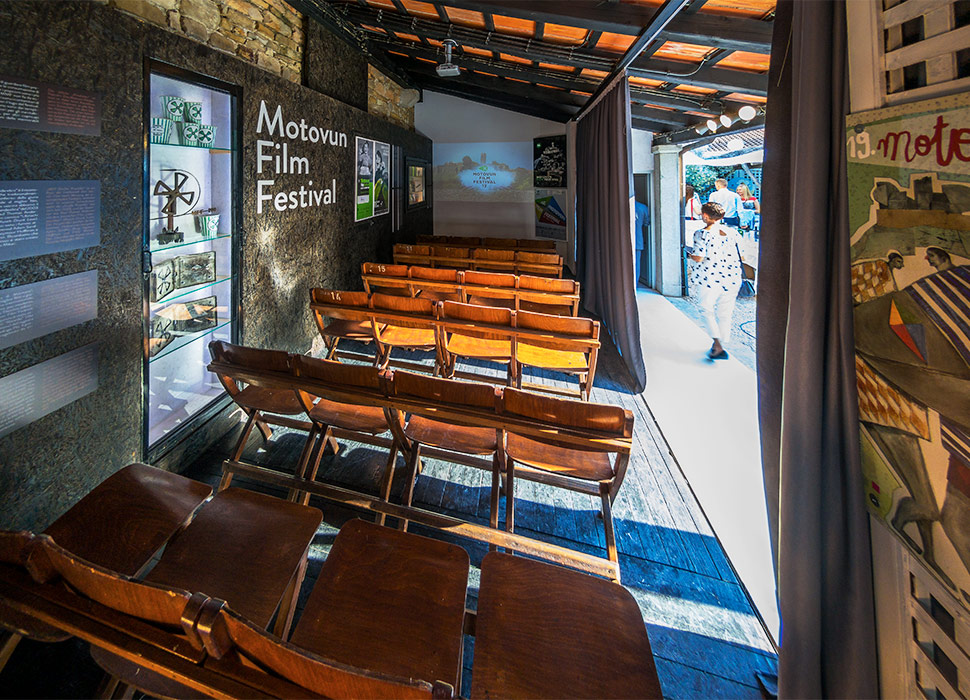 Last but by no means least, the Motovun Film Festival is a buzzy, grassroots event that takes place annually and has put the village on the cultural map. Twenty years in, it's now massively respected in the international film industry and firmly placed on the festival circuit. This year’s programme will be screened from 26-30 July, and will include independent productions with an innovative approach, and intriguing films that might otherwise struggle to gather recognition in the mainstream movie theatre system.