Volcanic viewpoints? Cactus havens? Blinding beaches? Lanzarote's got 'em all (and much more). Here are the island's best bits 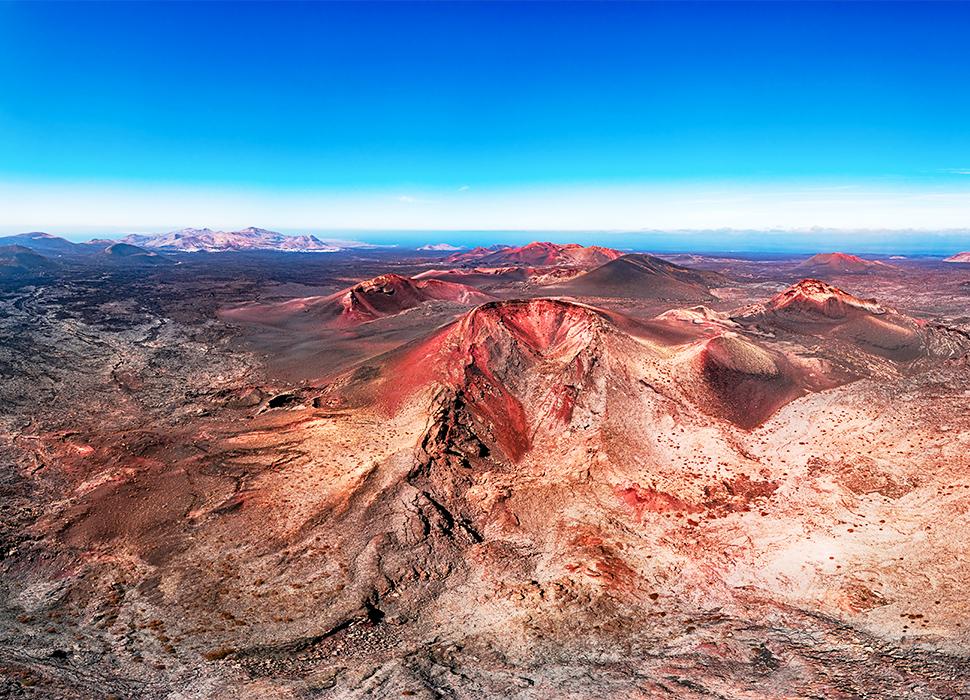 At just 20 square miles (51 square km), Lanzarote's barren Timanfaya National Park is compact but spectacular. While we wouldn’t advocate climbing the still-active Timanfaya volcano from which the park takes its name, the likes of the cauldron-esque La Rilla are perfectly ascendable. The stark lunar landscape has made it the ideal training ground for Nasa: perfect terrain to test drive their nifty Moon and Mars Rovers. It also provides challenging trails for more conventional visitors, best explored via the various guided hiking tours available. 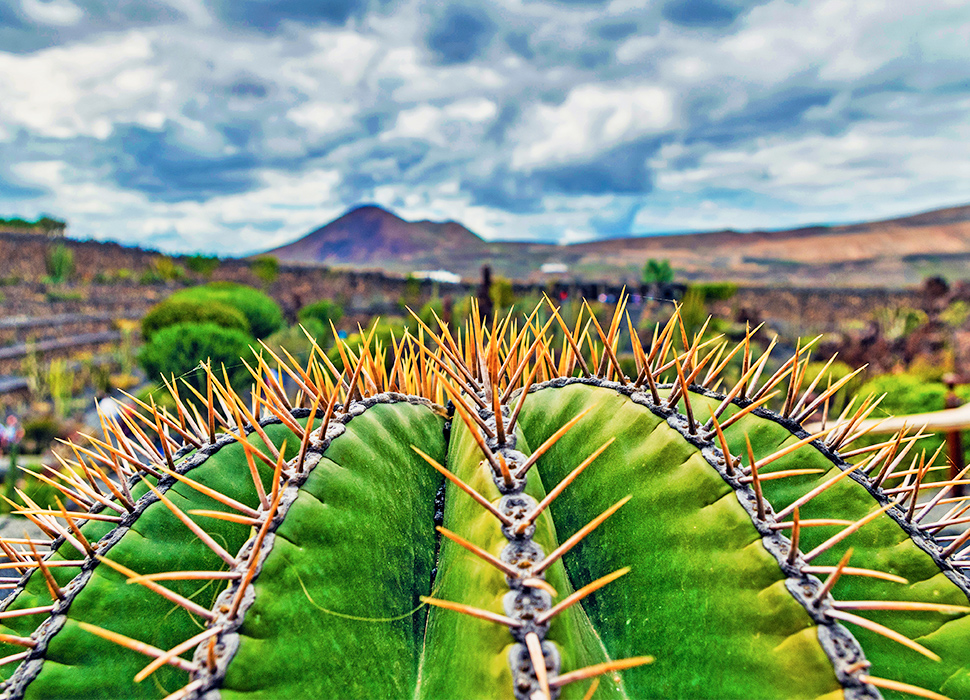 Cacti are a symbol of Lanzarote, not least as they're beloved by locals who use the fruit to prepare everything from juices to plant-based burgers. Guatiza village’s Jardín de Cactus is  – drum roll – a dedicated cactus garden located in a converted quarry, now home to 4,500 plants from 450 separate species. The garden was the last natural intervention of the island’s biggest champion and defender, César Manrique, conceived as a way to marry tourism with landscape preservation. The result? An untouchable, breathtaking sea of green under a Simpsons-blue sky.

3. FEEL JUST SWELL AT THE SURFING PARADISE OF FAMARA BEACH 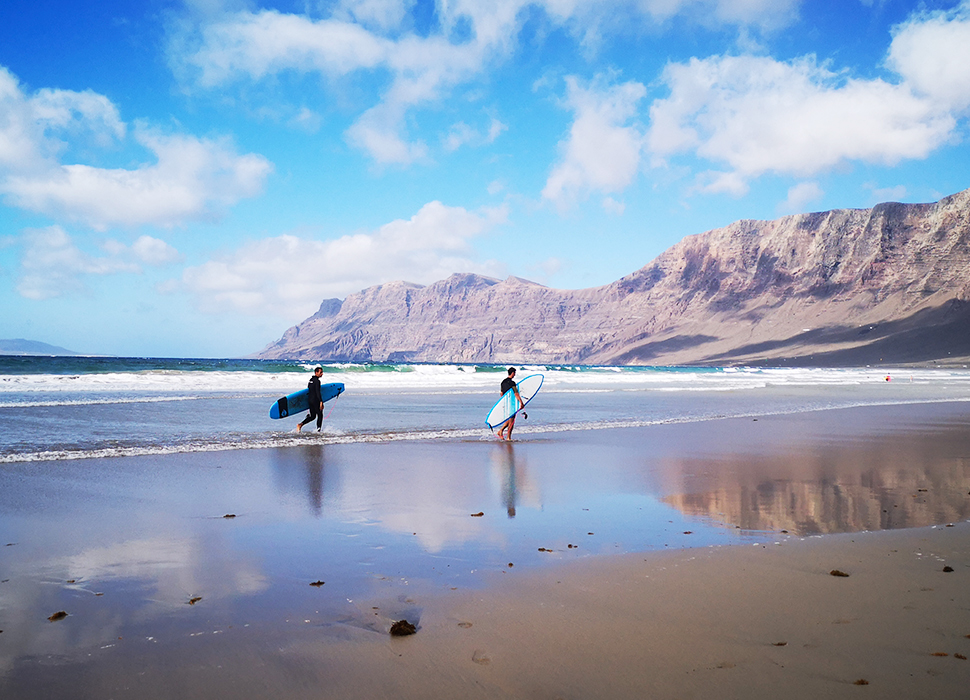 Taking in the breaks at Famara beach / Image: Adobe Stock

Such is the quality of surf off the shores of Lanzarote that the island has become known as the 'Hawaii of Europe'. North-coast Famara is the pick of the beaches for those with boards, as it guarantees the best breaks and is wide enough to accommodate everyone from beginners learning the basics with a local surf school to more experienced pros. If topping up your all-over-tan is more your thing – this is also a playa popular with naturists, FYI – aim to visit at low tide before the golden miles of sand are swallowed up by the Atlantic. 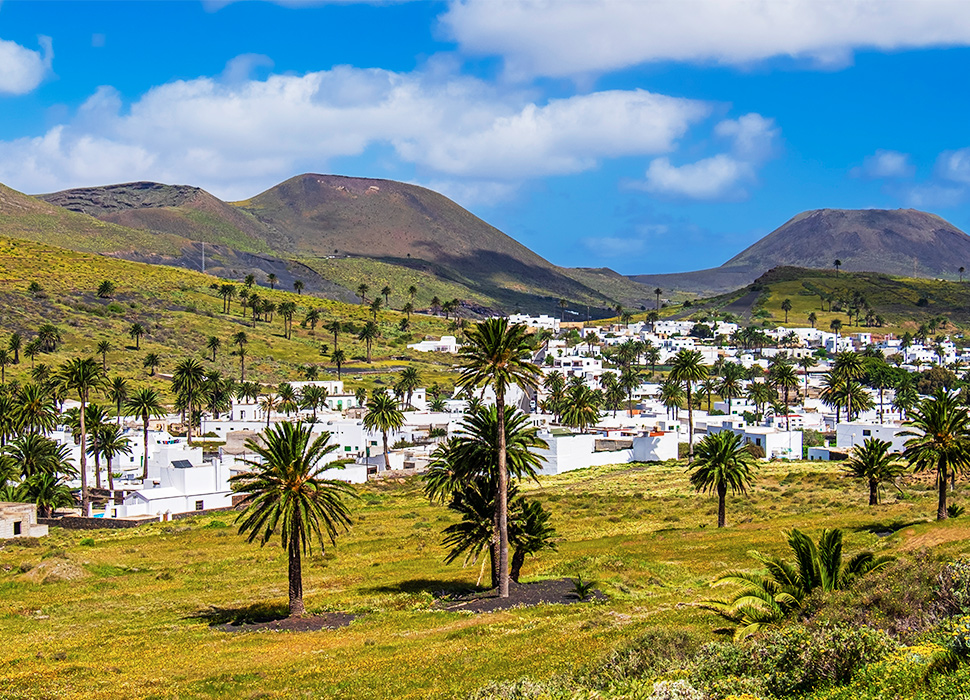 Haría is a whitewashed village in a sensational setting / Image: Getty Images

Haría has a beautiful setting in the island’s Valley of a Thousand Palms – created from the archaic tradition of planting a palm to commemorate a new birth – and a sea of traditional whitewashed architecture. Which explains why César Manrique made his home here, as you’ll discover in the house museum established in his name. Make sure to schedule a Saturday sojourn here, to take in the artsty-craftsty market held in the central Plaza de León y Castillo.

5. SEE LIFE BEYOND THE RESORTS IN ARRECIFE

The much underrated capital of Arrecife / Image: turismolanzarote.com

Lanzarote’s main port is also its capital – an under-the-radar destination which deserves more attention than it usually receives from tourists bolting straight from airport to resort. Must sees include the Castillo de San José, an 18th-century fortress which has been transformed into a contemporary art gallery, and Playa del Reducto beach – perfect for a tranquil dip in waveless water. Furthermore, Arrecife visit isn’t complete without spending some time around the Charco de San Ginés, an ocean lagoon which earned the island's main urban hub the nickname of 'Venice of the Atlantic' and which is surrounded by a number of agreeable bars and restaurants.

6. VISIT THE HOME OF A LITERARY TITAN 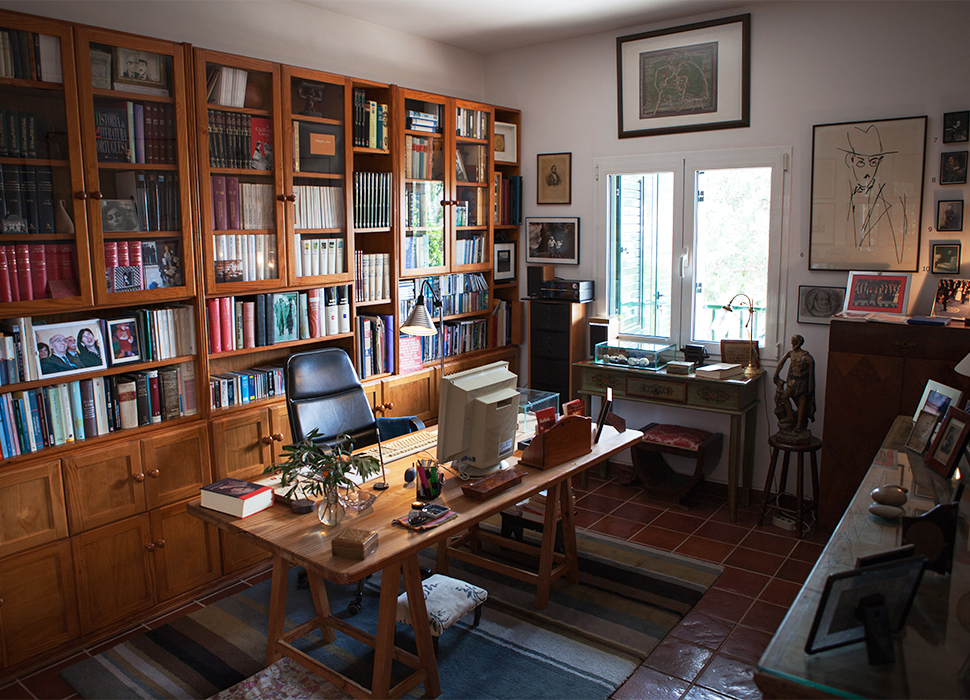 The late Jose Saramago was a hugely sophisticated author celebrated for his inventive use of language (and, crucially, the favourite writer of 'special' football manager José Mourinho). Discover more about one of Portugal’s most significant literary figures at A Casa José Saramago in Tías, Saramago's erstwhile home on the island. Best known for novels like The Year of the Death of Ricardo Reis, The Cave and The Double (later adapted to the big screen as the Jake Gyllenhaal vehicle Enemy), Saramago won the Noble Prize for Literature in 1998 six years after moving to Lanzarote in despair at the continuing censorship from his home country.

7. DIVE INTO AN UNDERWATER ART MUSEUM 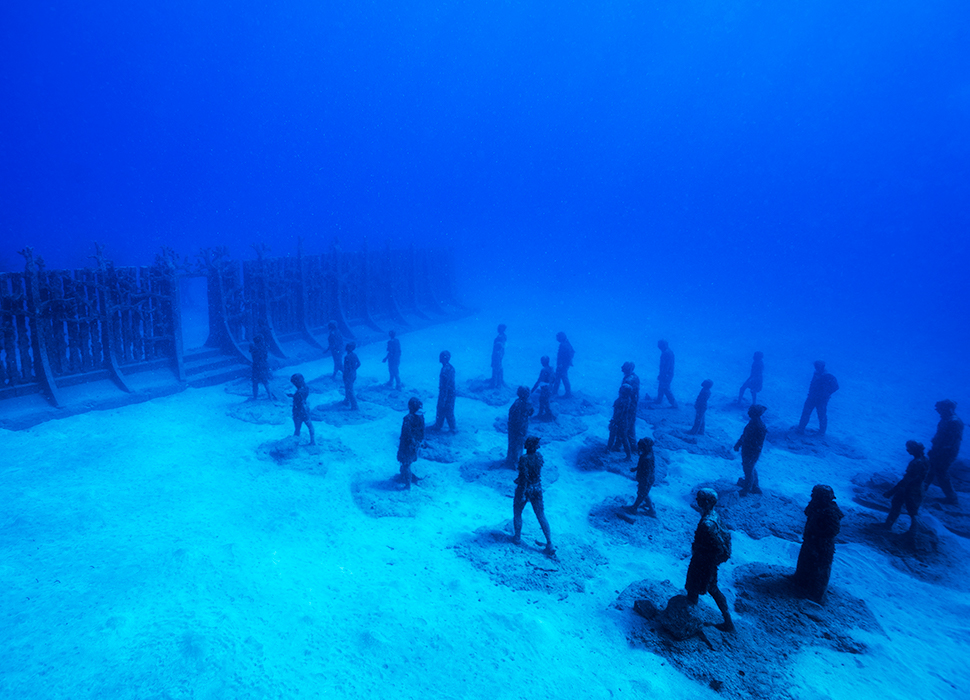 Europe’s first underwater museum is located off the coast of Lanzarote, where intrepid visitors can gawp at British artist Jason deCaires Taylor’s sculptures by way of a diving expedition out of Playa Blanca. Both novice and experienced divers can access the site, which is home to 12 installations and 300 life-sized figures crafted from environmentally friendly concrete. The eerie aquatic assemblages depict both real-life people, including celebrated local residents, and timely events – of particular note is a sculpture dubbed the Raft of Lampedusa, a riff on Géricault's 1818 painting The Raft of the Medusa that references the 21st-century crisis of migration.

8. DRINK YOUR WAY ACROSS ITS VOLCANIC VINEYARDS 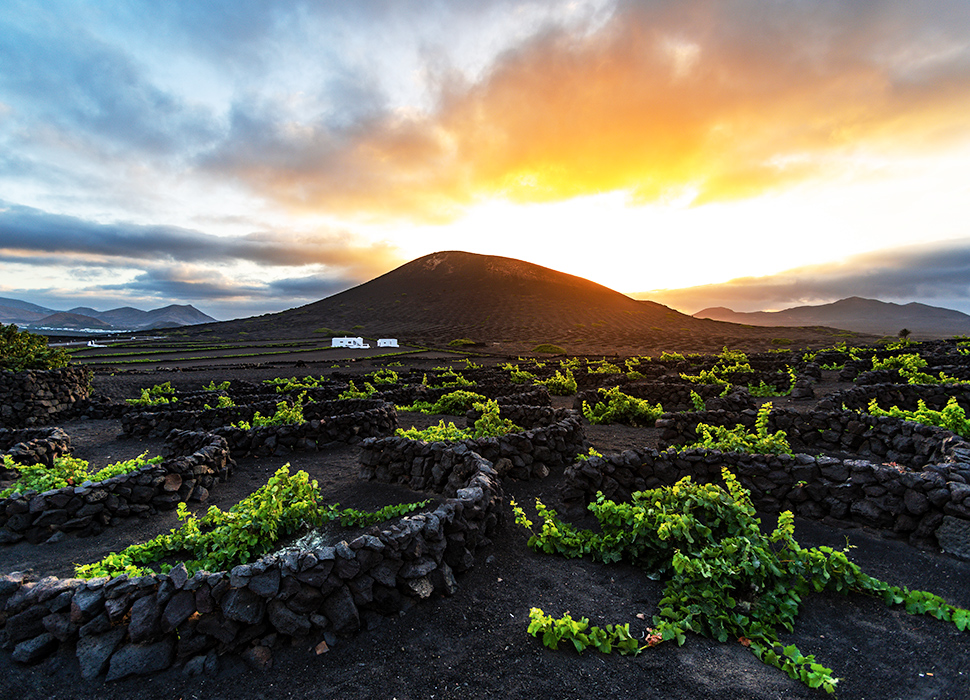 Lanzarote's volcanic vineyards have been lauded for centuries / Image: turismolanzarote.com

The 'malmsey' wine so fawned over by Shakespeare in his writings was a reference to the Spanishmalvasía – a naturally sweet Canarian vintage produced by using sun-dried Madeiran grapes. The grapes still exist in abundance throughout Lanzarote's esteemed La Gería wine-producing region (though now their use is extended to all kinds of wine, not just sweet varieties). Vines are protected from the island’s strong winds by being planted in holes dug into volcanic rock, filled with volcanic soil and sheltered by a stone wall called a zoco. There are a number of highly rated wineries in this southwest area including the titular La Gería and the storied El Grifo, which was founded in 1775.

9. DESCEND THE EARTH IN A TOTEMIC LAVA TUBE 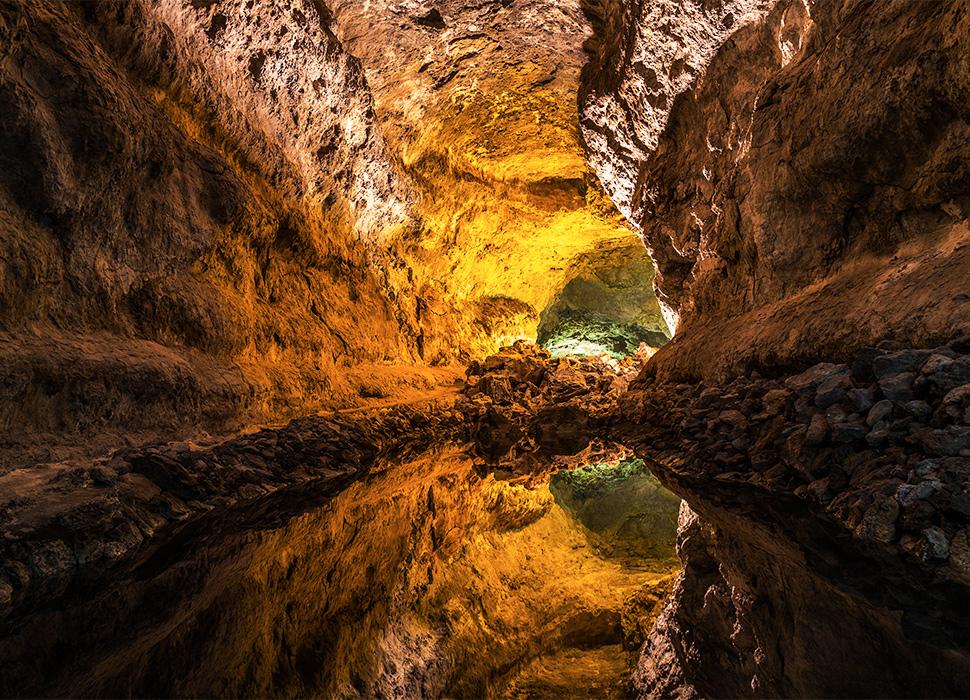 You’ll find atmospheric lava tube Cueva de los Verdes in northeast Lanzarote’s protected Monumento Natural del Malpaís de La Corona – a rugged badlands created by the erupting La Corona volcano 21,000 years back. The tunnel takes in 16 lava caves with an underwater section – named after Atlantis – which eventually meets the Atlantic. The Cave of the Greens, named after a family of local goatherds, is a geological wonder whose acoustics were utilised in the 1960s by Fuerteventura artist Jesús Soto – in conjunction with César Manrique – to create a unique auditorium that now hosts mainly classical concerts.

10. SEE ALL OF THE ISLAND FROM MIRADOR DEL RIO 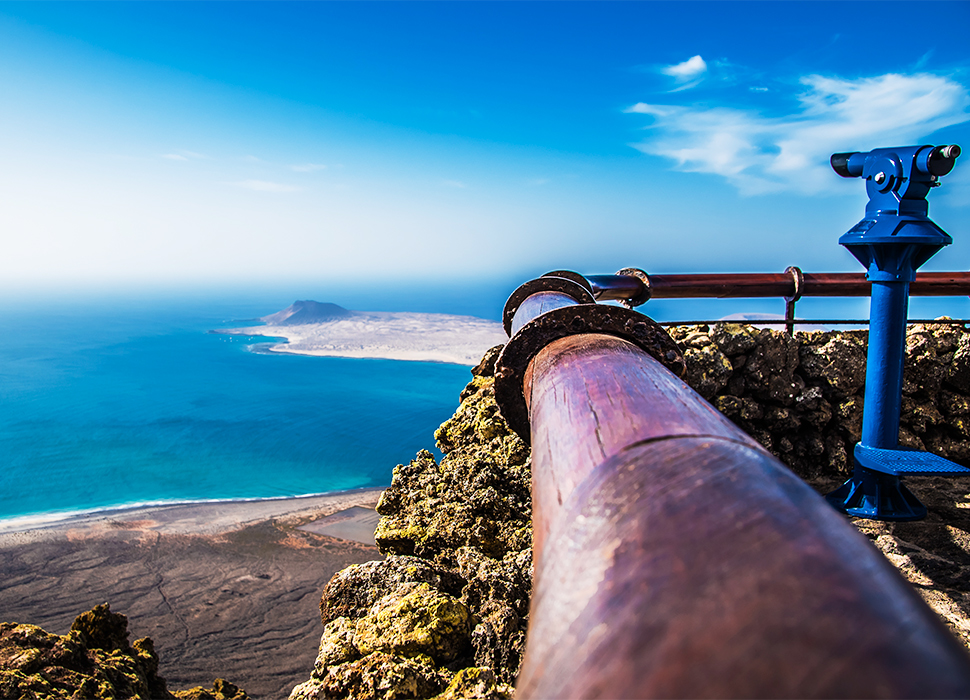 Yup, it's ol' César Manrique again. The feted artist-architect 's lofty Mirador del Rio viewpoint, opened in 1973, was conceived as a manifestation of his motto 'art into nature, nature into art'. It was typical of the thoughtful approach that led to Manrique being described as a 'philosopher of architecture' by fellow impresario Frei Otto. Located 474 metres above sea level, the viewpoint – designed to resemble a chameleon masquerading as part of the rock – offers unparalleled views of the island (plus a neat coffee shop).