Beauty might be in the eye of the beholder, but we think you’ll agree these scented spots across Europe are blooming marvellous. These are most beautiful flower-filled places to see as the season turns

A rose by any other name would smell as sweet, but perhaps not quite as lovely as these petal-covered paradises. Come the fairer weathers of spring, Europe quite literally bursts into life. Buds of all kinds part their green coats to reveal the vibrant, silky petals within, releasing heady aromas into the air — and, no doubt, flooding your social media feeds with colour. We’ve flown to the places on our network with the most flower power, from walks among Greek wildflowers to a taste of sakura season in Germany, so you can wake up and smell the roses. Or poppies. Or even tulips. Don’t be too picky, now.

Fancy your vistas a bit more, well, wet? These are the most beautiful lakeside retreats in Europe.

Flora done, it's time for some fauna. Here's our guide to the best whale watching in Iceland. 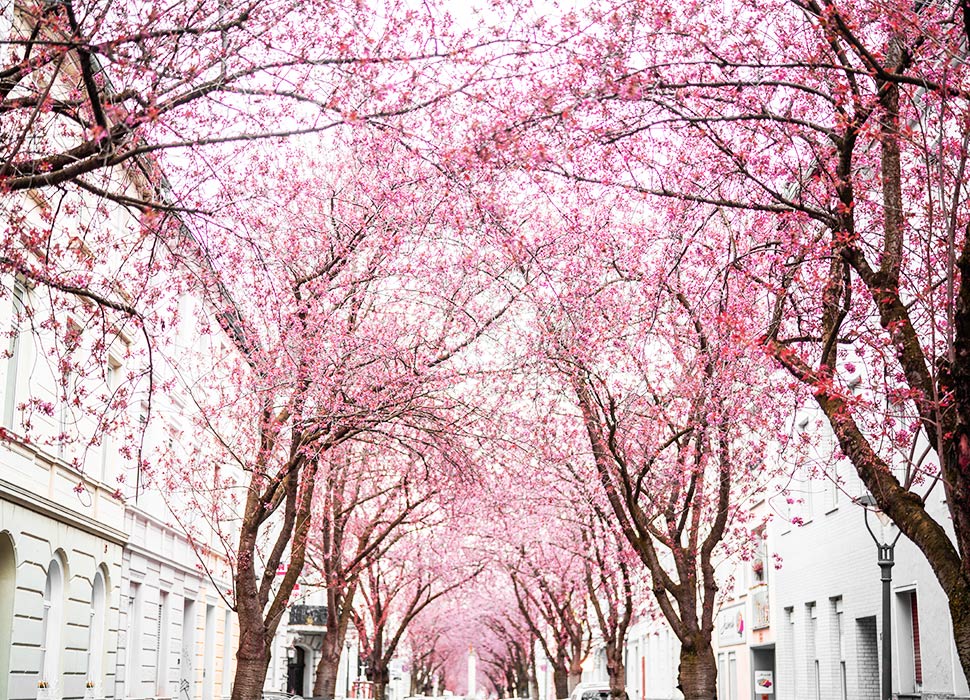 Ambling down Bonn’s Heerstrasse in April is akin to wandering under a canopy of candyfloss clouds. This cobbled street in Nordstadt was gifted its enchanting cherry blossom trees by Japan in 1980, and four decades of growth have transformed them into one of the city's hottest tickets. As in Japan, though, the blooms are fleeting. Once they start flowering, you only have about two weeks to see them – sakura waits for no-one. In balmy Bonn, cherry blossom season tends to fall from late March to late April. So what are you waiting for? Get yourself there, 'stadt. 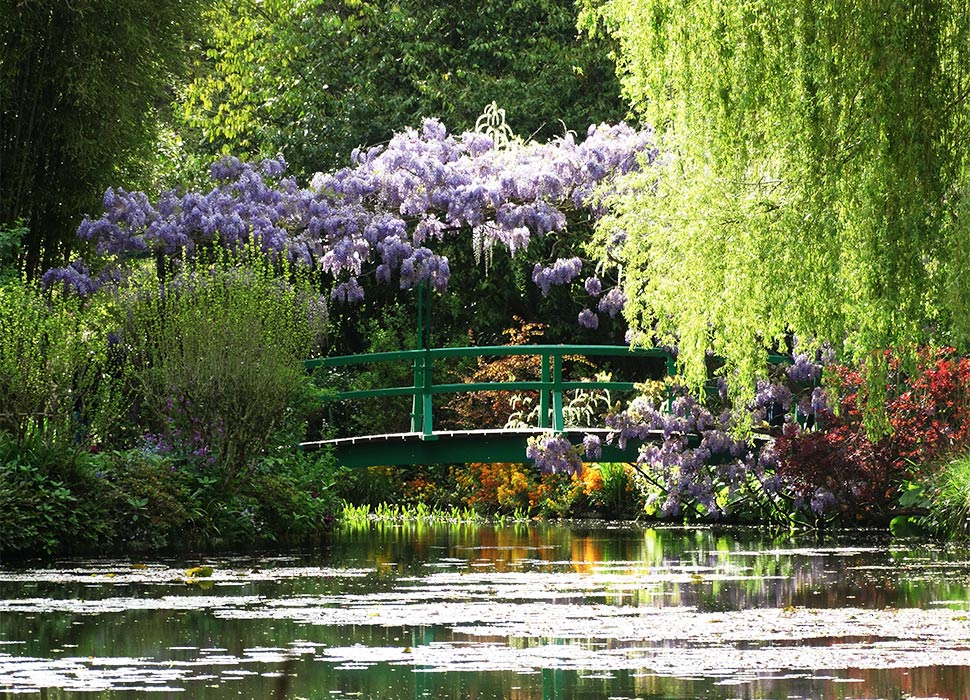 Monet applied his artistic vision to every aspect of his life – step into his Clos Normand flower gardens, just outside Paris, for a world of colour-coded delight. After ruthlessly chopping down his wife’s spruce trees, Monet lined the main path with rose arches, before turning the borders into a veritable artist’s palette. On the left side of the garden, 38 flower boxes (containing golden daffodils in April and pastel blue forget-me-nots in May) form glorious blocks of color, working to highlight his home’s bold pink shade. 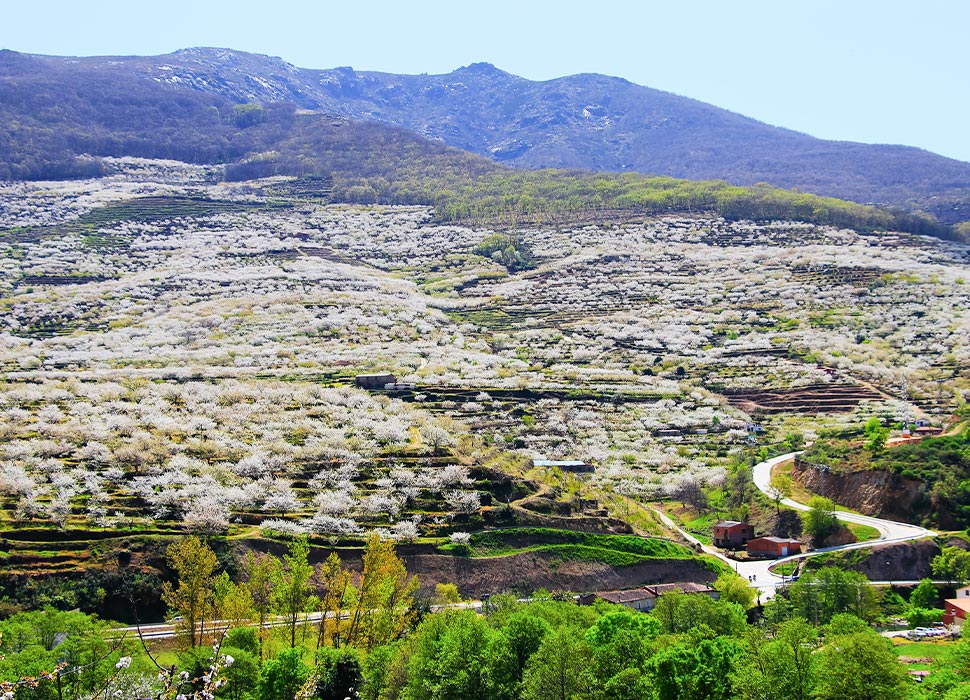 Cáceres's cherries are as delicious on the eyes as the tastebuds / Credit: Adobe Stock

Cáceres has become famous for its ruby-red cherries, a delectable detail on any dessert. But syrup isn’t the only by-product of these Spanish beauties – cue the blanket of white blossoms that coat the beautifully-cultivated slopes of the Valle del Jerte every March and April. After a harsh winter, two million trees reward their stewards with a spectacular show; so spectacular, in-fact, that the locals set up a celebratory annual Cherry Blossom Festival in the 1970s. Taste the region’s succulent picota cherries in a variety of foodie forms, watch mountain races, and be sure to stick around for the petal rain: the magic moment the blossoms begin to blow away in Extremadura’s warm breeze. 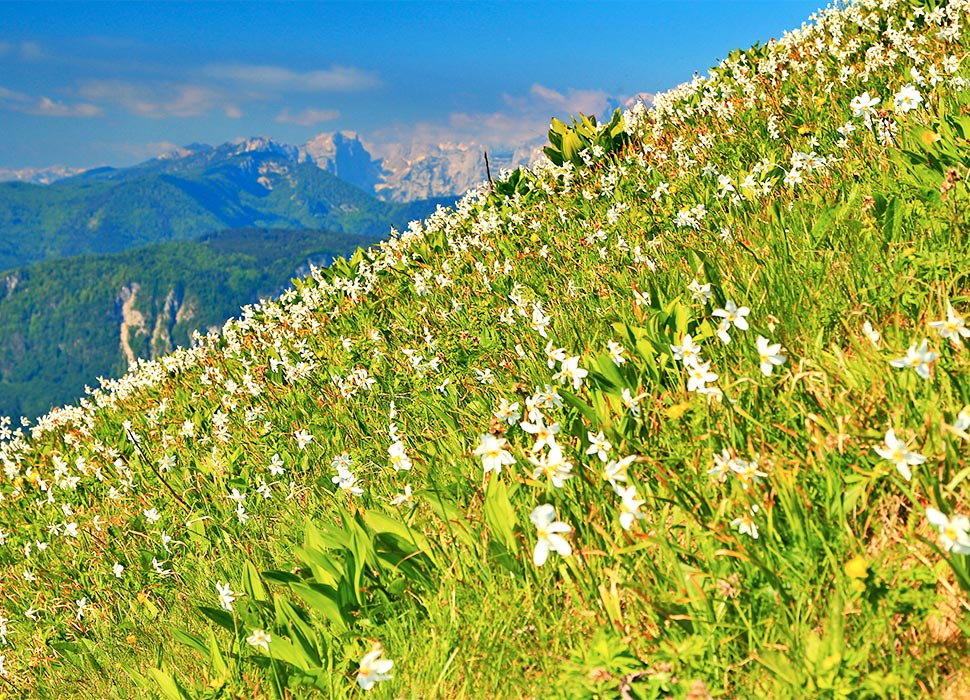 At Golica, a border-straddling mountain, you can see deep into both Austria and Slovenia; however, this spring, you’ll only have eyes for the latter. This side of the rock is carpeted in white from April to June, but it’s not snow you're seeing – it’s thousands of white daffodils. The pale, star-shaped petals make the distinctive yellow trumpets stand out even more than usual, and it seems the sweet-smelling flowers are nectar for humans and wildlife alike. Local legend has it that God became angry at the bees round here for their incessant pollen harvesting, and installed trumpet-shaped locks – that's what the local nickname of "ključavnice" means – on the flowers to thwart the pesky critters. But with blooms this pretty, who could blame him? 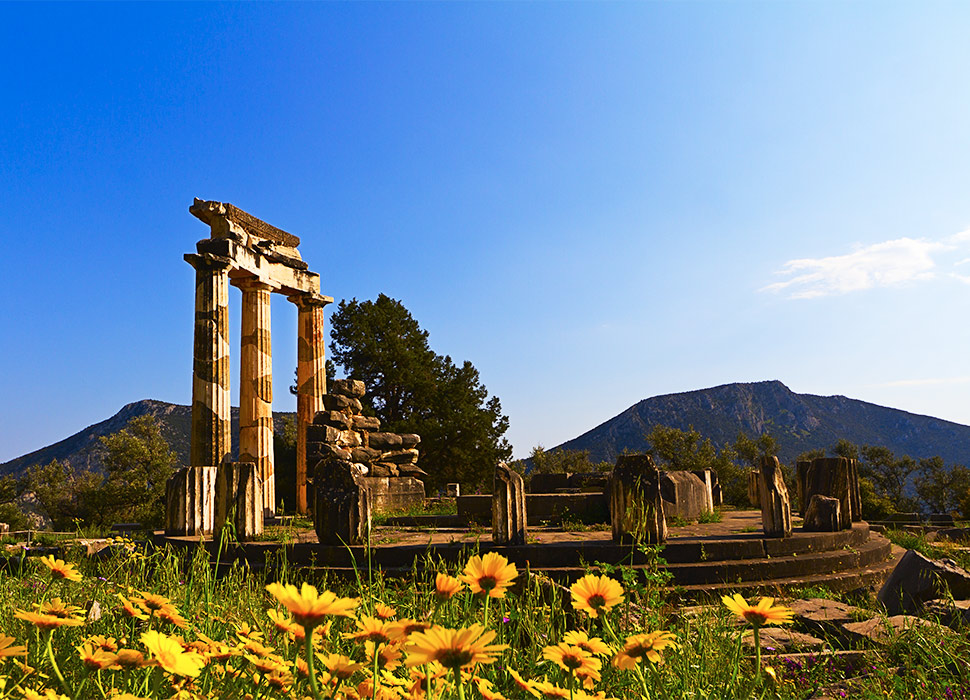 You probably won’t find Cumberland’s county flower, the Grass-of-Parnassus, on its namesake Greek mountain. However, as you hike through piney pathways and miles of meadows, you will find an abundance of purple crocus flowers. Intrepid botanists should go searching for the endangered Parnassian peony, which comes in hues of deep maroon. Visiting in springtime means you’ll skip the busy ski season and the hot summer crowds. 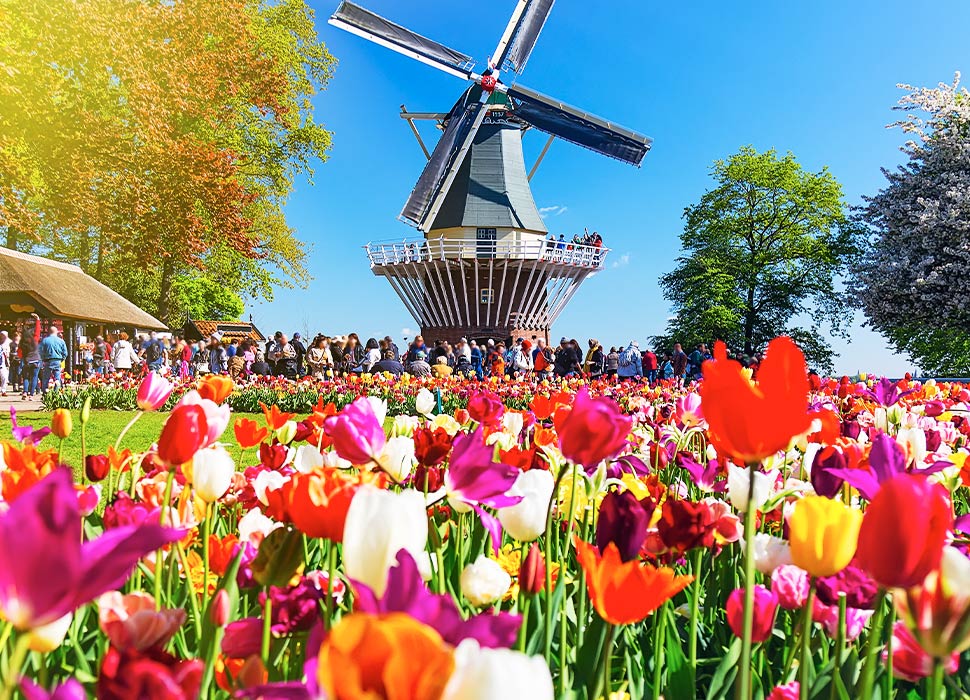 Between Amsterdam and The Hague, a stereotypically Dutch flower garden sits pretty. However, the Keukenhof tulip gardens are only open between March and May, so you’d better get your clogs on. Here, over 800 kinds of tulip and 7 million annually-planted flowers reside among the windmills and stepping-stone ponds. Visit the Tulpomania pavilion to brush up on your bulb knowledge, before strolling more than ten miles of tulip-side paths. Every year, the Keukenhof chooses a theme, and this year’s is “Classics” – exploring how these four-petaled flowers have implanted themselves at the heart of Dutch culture, art and architecture. 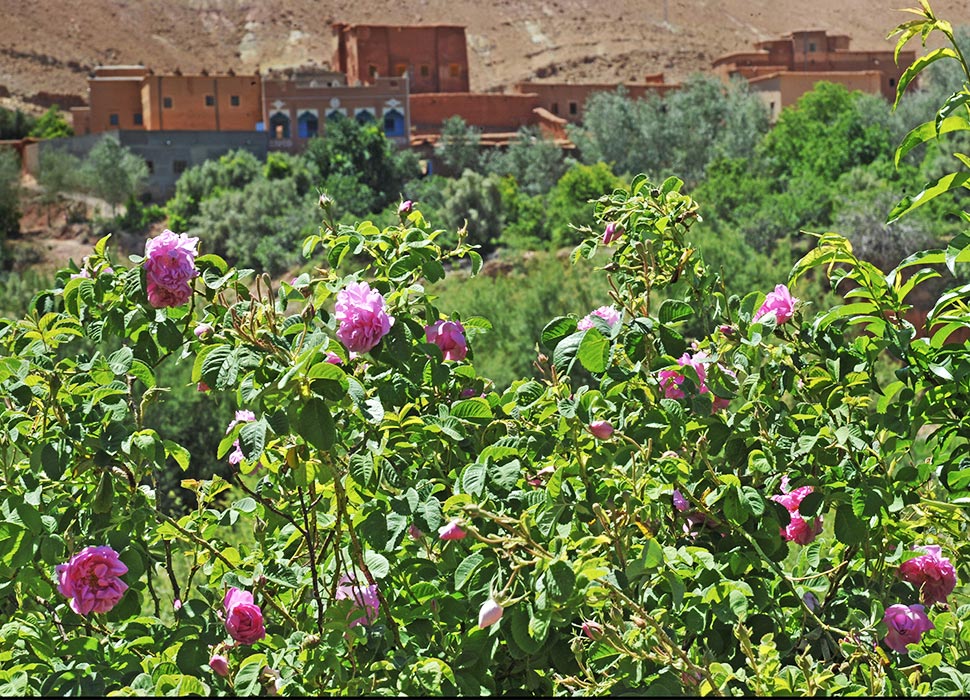 Rows and rows of roses can be found in a fragrant Moroccan valley / Credit : Adobe Stock

Ever gone into a perfume shop, and been hooked on the fragrance of the damask rose? Go and see these rosé roses for yourself in the M’Goun river valley, a day trip from Marrakech. Growing season is April to mid-May, then the harvesting process begins: local Berber women make quick work of pruning the bushes, selling them on for prized Moroccan rose extract (a litre of the pure stuff can fetch up to £10,000). Harvest complete and petals laid out to dry, the three-day Rose Festival occurs in May. There, you can bear witness to Berber swordfighting, dance the night away to heart-pumping drum beats, and watch kaftan-clad local women fiercely compete for the “Rose Queen” title. 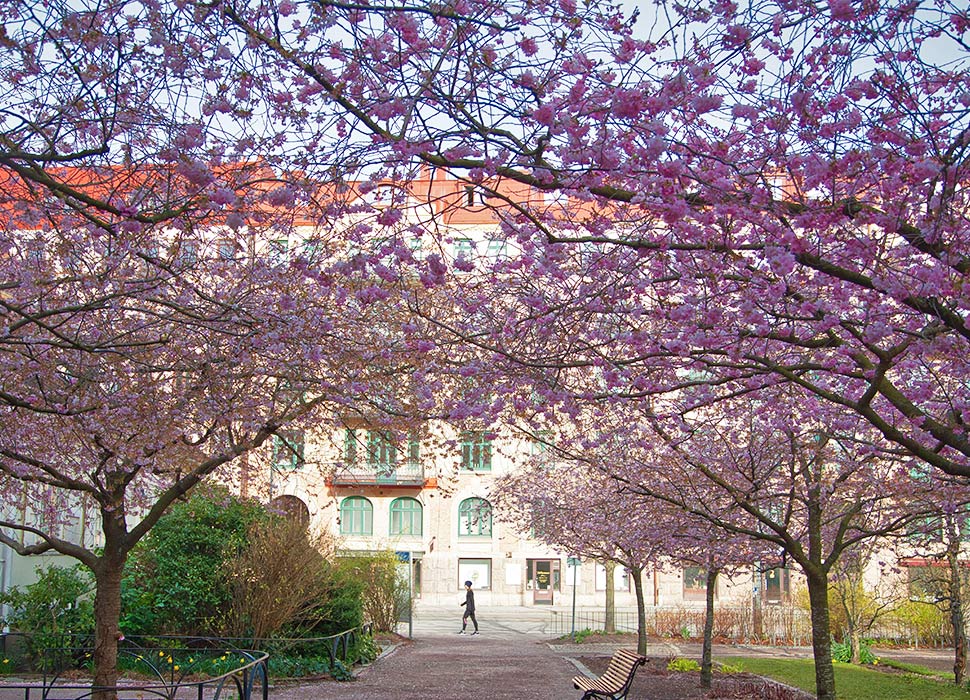 A canopy of blossom awaits in this Swedish gem / Credit: Alamy

This petite park in the centre of Gothenburg was once part of a teacher training college. Back in those days, botany was considered an important part of one's education – and when you take a slow cycle through the cherry blossoms of Seminarieparken, you’ll feel the curative powers of good gardening. Look out for the cute bird-feeders and igloo-style greenhouses, plus swathes of daffs and bluebells if you’re not in time for the pretty-in-pink main attraction. 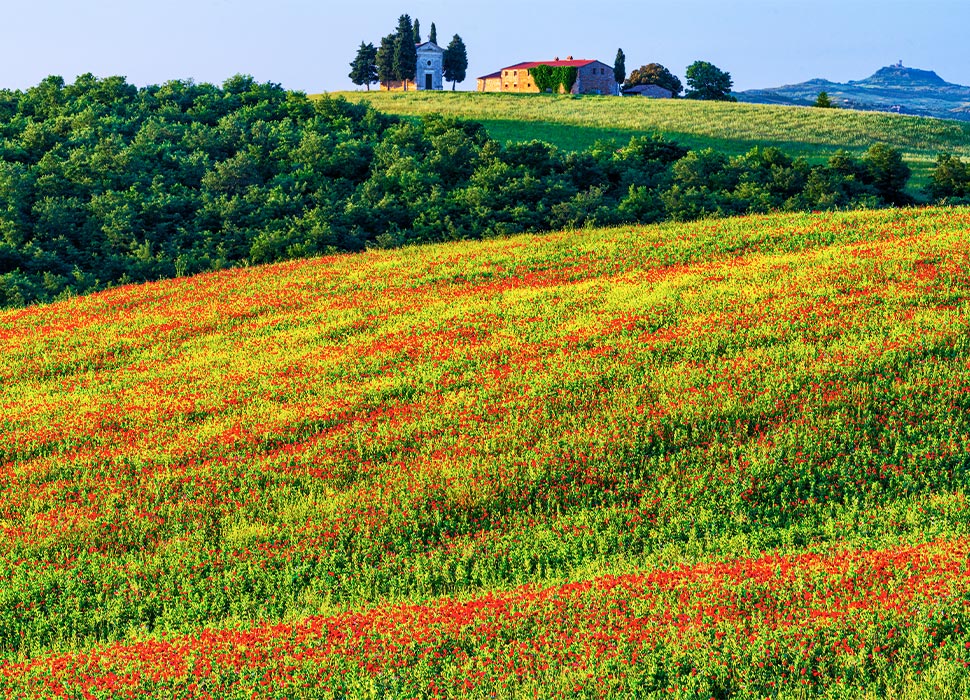 Sandwiched (or should we say, panini’d) between Rome and Florence is the gloriously Tuscan Val d’Orcia, a rolling agricultural valley of Gladiator and early Windows screensaver fame. In late April to early May, its hills are drenched in crimson. Not because Russell Crowe has been battering another unlucky opponent, but because Flanders poppies burst into bloom. Unlike other flowers, these poppies thrive in heavily farmed soil, and the lack of competition here allows them to sow their seeds far and wide, with spectacularly photogenic results. We find they’re best admired with that other type of Tuscan red — a smooth glass of Chianti.

Fly to Pisa or Rome 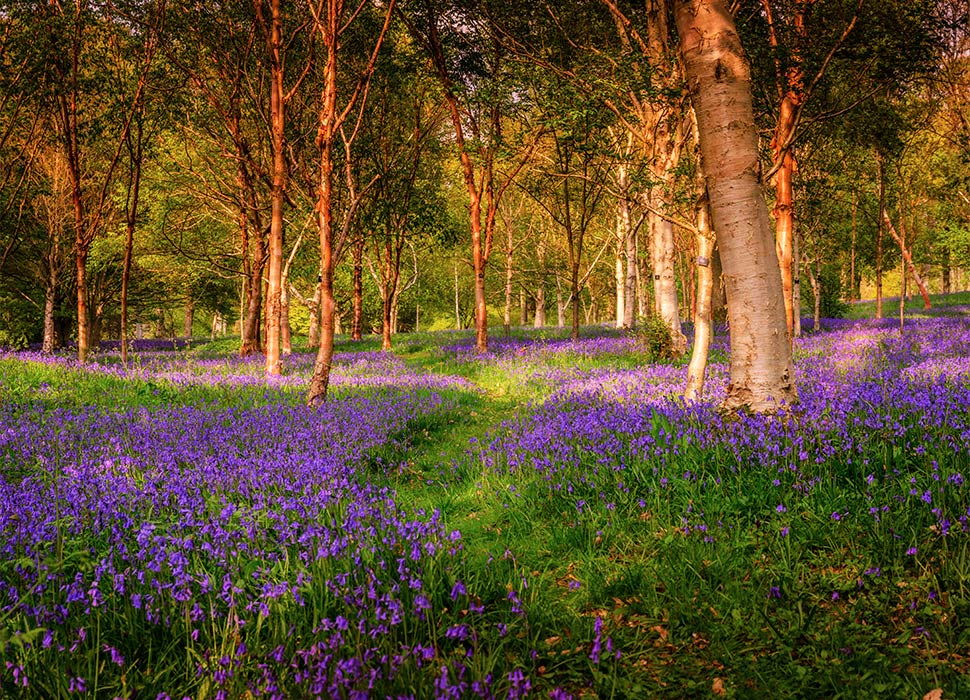 If you're looking for a layover among the flowers on the borders of southeast England's radiant High Weald, look no further than wonderful Wakehurst. Yes, there's a 16th-century manor house that's well worth a gander, but what you'll really want to see are the undulating bluebell woods, stunning magnolia trees, and carpets of cyclamen that reveal themselves at this time of year. Consider yourself something of a botanist? Spring into one of the world's largest seed conservation projects, the Millennium Seed Bank, to learn about the planet's most hard-to-find flora.