We’re not going to lie to you – this is just a shameless round-up of incredibly stunning beaches. The most heavenly, envy-making, daydream-feeding stretches of sand across Europe, plain and simple. Have a gander at these by-the-sea beauties and just tell us you’re not overcome with the sudden urge to slather yourself in sunscreen and frolic in your swimsuit. They’re impossible to resist. Bookmark your faves for when we can travel again. 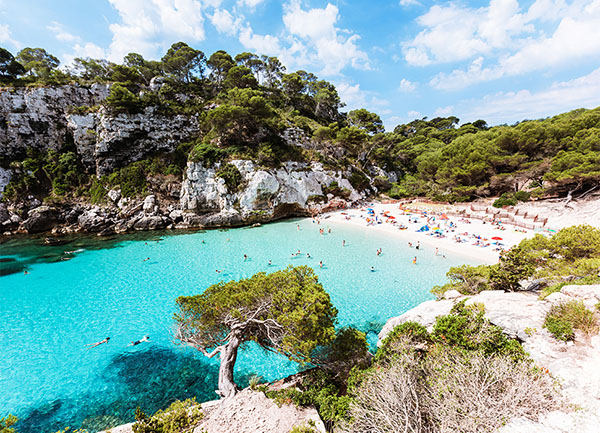 This pristine beach – partially shielded by a limestone cove – is in one of the most spectacular corners of Menorca. Mercifully, it also happens to be one of the more hidden-away bits of Spain’s sun-drenched island, which means you won’t find any tourist mobs here – just dreamy turquoise waters, fragrant pine trees and lots of space to spread out. You can reach the beach by bus or car, but we recommend taking a scenic 40-minute stroll from Cala Galdana, which will take you part of the way along the famous Camí de Cavalls coastal path.

Insider tip: The fact that Cala Macarelleta is so relatively untouched means there aren’t many amenities on the beach. Stock up on bread and cheese at Ci Fe Supermercado in Cala Galdana before you arrive, and be prepared not to use the toilet for a while.

Book flights and holidays to Menorca 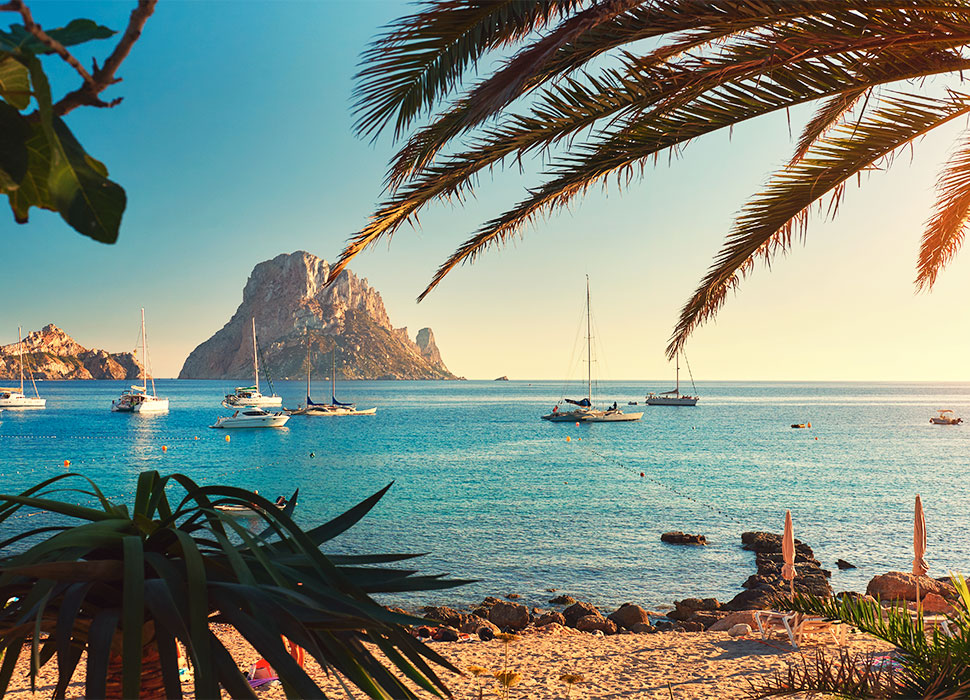 Get a eye full of the mystical Es Vedra from this popular beach / Image: Adobe Stock

The mystical Es Vedra is one of Ibiza’s greatest marvels – a small, oblong island of rock that juts out from the sea, said to be the third most magnetic place on earth. Feel its pull from the honeycomb shores of Cala D’Hort, where you’ll find the most unobstructed view of this craggy legend. But don’t spend your whole afternoon staring at a giant rock – the warm, shallow waters are begging to be swam in.

Insider tip: For a higher-vantage sweeps of Es Vedra and the sea, book at table at nearby Es Boldado. This clifftop restaurant does faultless, fresh seafood and excellent paella, made all the more delicious by the dramatic views.

Book flights and holidays to Ibiza 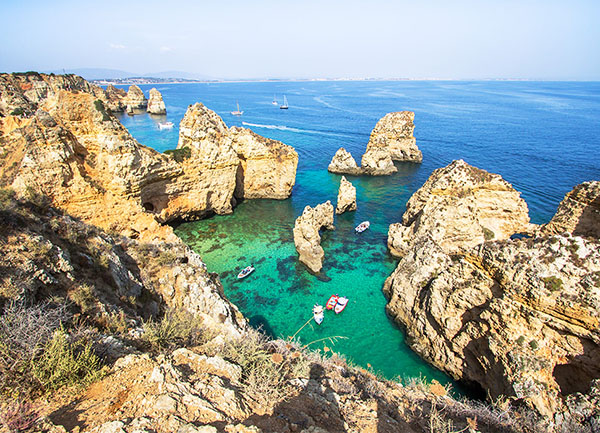 You'll need to look for it, but Praia de Benagil is a worthy find / Image: Getty Images

Portugal’s most-photographed beach is popular for good reason – it’s simply stunning, partially shaded by an ancient cave with a hole in the ceiling from which beams of sunlight stream in, casting a golden hue on the glimmering rock. To see it for yourself, you’ll need to swim 200m from the main bit of the beach around a rocky cliff, then wade through one of the cave’s openings to marvel at this geological wonder.

Insider tip: The currents in the area can be strong, so if you’re not a confident swimmer, you can hop on one of the boat trips that leave from several local beaches (Armação de Pêra, Carvoeiro and others), or hire a stand-up paddleboard (SUP for short) and row your way there.

Book flights and holidays to Faro and the Algarve 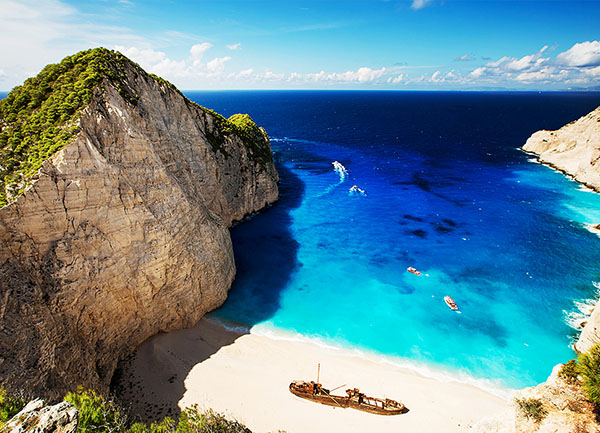 The most beguiling bit of the Ionian island of Zante (aka Zakynthos) is no doubt Navagio Beach. The reason it’s nicknamed ‘Shipwreck Cove’ is immediately evident when you lay your eyes on the hulking metal beast that lays giant and empty on the shimmering shingle beach. The MV Panagiotis ran aground in 1980, and has since become the beach’s star – tour boats sail over from around the island, filled with tourists eager to catch a glimpse of it. But it’s not just this giant rust bucket they’ll get an eyeful of: the bleached-white cliffs, immaculate shore and sparkling aquamarine sea are all equally enchanting.

Insider tip: You can skip packing into a dinghy with hordes of camera-wielding tourists – the beach’s main viewpoint, from which you can snap that famous aerial photo, is accessible via car. Just be careful – the drop is perilously sheer.

Book flights and holidays to Zante 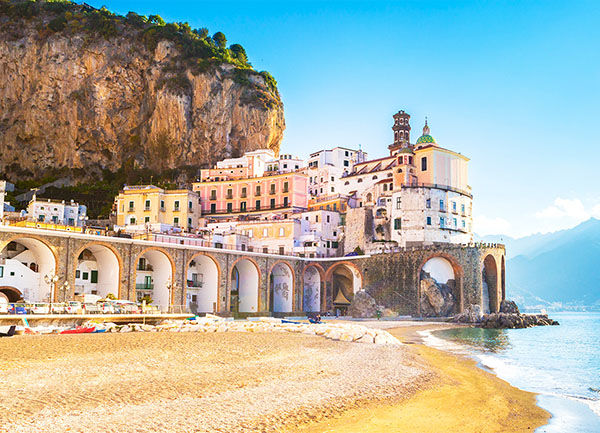 For most travellers, Italy’s well-heeled Amalfi Coast conjures up images of glamorous Mediterranean beaches specked with impossibly gorgeous sunbathers, technicolour parasols and a flock of blue deckchairs. Spiaggia Grande is all of those Amalfi fantasies come to life, fringed by verdant hills that explode with electric-coloured terracotta houses. It’s every bit as alluring and fashionable as you’d expect from a city beach on Italy’s southern coast – so if you’re pitching up for the day, bring your designer sunnies and your A-game bathers.

Insider tip: If you really want to go the full monty, lay your towel at La Scogliera on the eastern edge of the beach – an exclusive lido with sunbeds, a bar, wifi and a relaxed attitude towards topless sunbathers.

Book flights and holidays to Naples and Amalfi 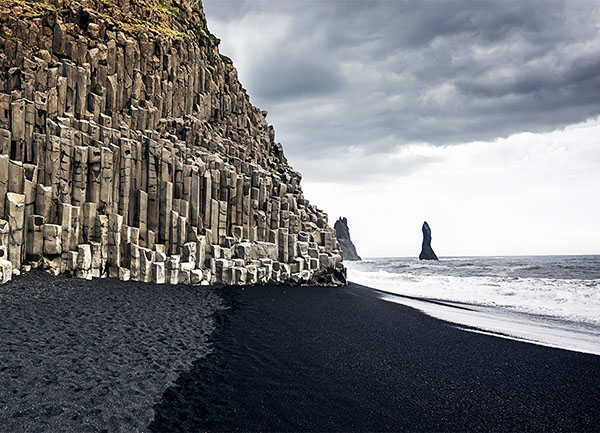 Embrace the dark side at Reynisfjara / Image: Adobe Stock

Certainly not your typical stretch of sand, this dramatic beach on Iceland’s south coast features jet-black shore backed by a space-agey cliff of basalt rocks, stacked high like an army of rectangular soldiers. In typical Icelandic fashion, there’s a bit of folklore attached to this geological oddity – legend has it that those basalt columns were once a cabal of trolls who pulled in ships from the ocean to the shore. Apparently, they got so into their work that they kept toiling throughout the night until dawn broke and turned them to stone. Sounds like the stone-cold truth, if you ask us.

Insider tip: Make a mini-road trip out of it: after taking in Reynisfjara, head on to the incredible Dyrhólaey cliff to ogle the pack of puffins that swim, dive and waddle around the beach below.

Book flights and holidays to Iceland 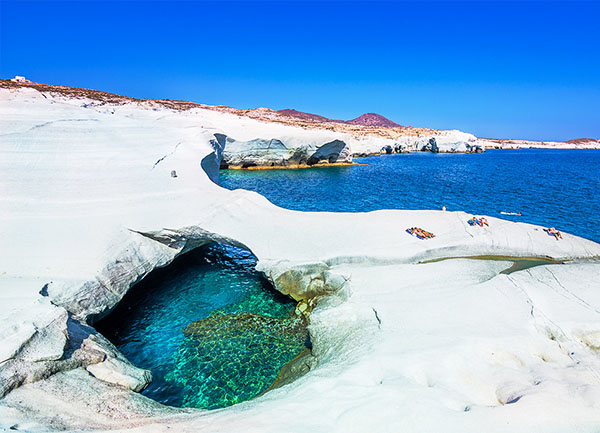 Is it the moon or Milos? / Image: Adobe Stock

You wouldn’t be blamed for thinking that this is a photo of people sunbathing on the moon at first glance, but no, this bone-white beauty is actually on the Aegean island of Milos. It gets its lunar look from the miscellany of stones – eroded volcanic rock, sandstone and pumice – that overlay its wild shores. The crystal-blue inlet that slices through the rock with its pleasantly shallow waters is an inviting place for a dip – or clamber over to the left side, where steep rocks and deeper sea make for an opportune cliff-diving spot. You can reach this far-out beauty via a three-hour ferry from Athens.

Insider tip: If you need to take a TO from the sun, have a nose around the abandoned mine tunnels that lead out from the beach, which are accessible from the small sandy patch at the end of the inlet.

Book flights and holidays to Athens 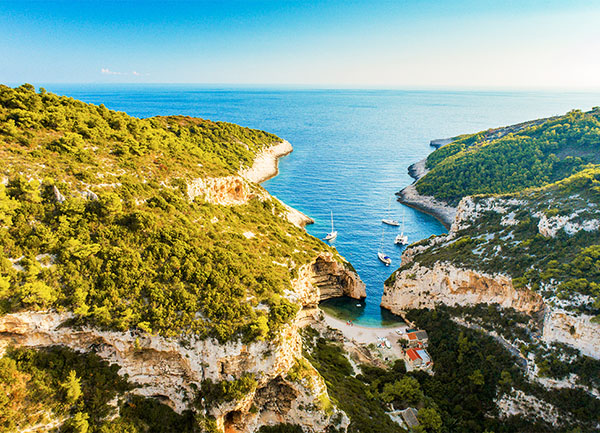 If you're after a sandy hideaway, seek out Stiniva / Image: Getty Images

Croatia’s most southern island, Vis – day-trippable from Split thanks to a swift one-hour ferry – is known for its enigmatic beauty, perfectly preserved by decades of isolation. Stiniva is a shining example of its stunning good looks, with soaring white cliffs that open out like a doorway to the turquoise sea. In 1967, the cove was declared a national monument and has been fiercely protected since – so in spite of the tourist packs descend on its pebble beach in summer, Stiniva still feels like a secret corner of Croatia.

Insider tip: Thrill-seekers, you’re in luck – there are plenty of cliff-jumping opportunities at Stiniva, though you may want to pack a pair of waterproof shoes as the rocks at the top of the crags tend to be quite jagged.

Book flights and holidays to Split 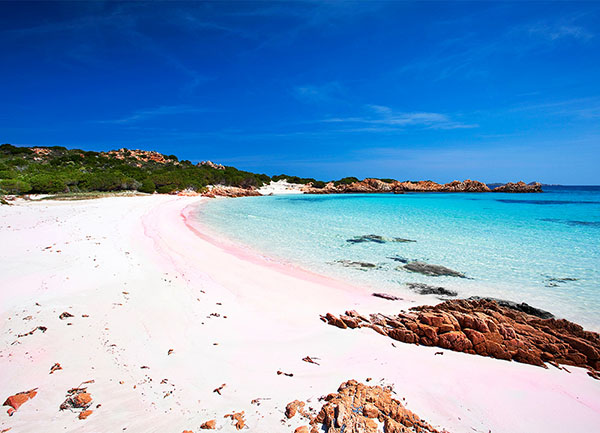 Located on a tiny island just off the coast of Sardinia you'll find Budelli. Officially a national park, this bubblegum-coloured wonder is one of the very few pink beaches in the world. It gets its rosy hue from all the crushed coral in the sand which has long been coveted by greedy tourists who’ve rudely bottled up the pink grains as a souvenir. As a result, visitors can no longer amble around the spiaggia itself, but can still admire it from two nearby beaches – Del Cavaliere and Cala di Roto.

Insider tip: Getting to Budelli isn’t super-straightforward, but it’s worth it to take in the untouched beauty of this little-known corner of Italy. If you’re in Olbia, you’ll have to drive 40 minutes to the port of Palau where you can catch a ferry the island. 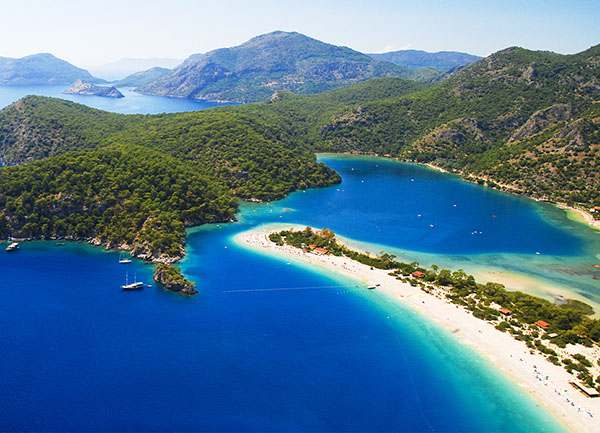 Turkey’s pin-up beach gets its name from the stunning turquoise and aquamarine waters, which look even more electric set against the blinding white of the shore. It isn’t exactly secret – all 12km of the beach are lined with deck chairs during high season – but it’s still worth a visit for its unparalleled beauty and proximity to a clutch of beautiful coves in the area. Adventurous types can gawp at the gorgeous landscape from a paraglider – or, if you like a more grounded beach experience, calm, warm waters and soft sands mean this is an ideal spot to while the day away.

Insider tip: While a lot of food and drink offerings on the beach can be hit-and-miss, Inci Restaurant is worth a look for its authentic home-cooked plates at decent prices.

Book flights and holidays to Antalya 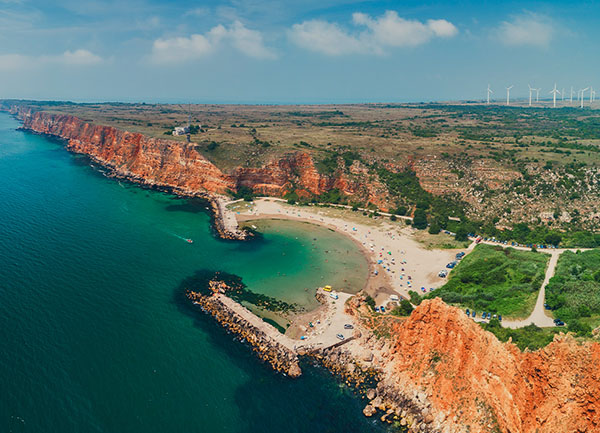 Bulgaria pulls it out the bag with this stunning beach / Image: Adobe Stock

Bulgaria isn’t exactly known as a sun-drenched paradise, but some of the shores along the eastern Black Sea coast are true hidden gems. The best of the bunch, Bolata Beach, is a surprising little enclave – a near-perfect semicircle covered in cashmere-soft white sands and bordered by green-and-red ridges. The warm sea is made perfectly swimmable by breakwaters, and you'll spot frequent feathered visitors who are protected by the cove’s status as a nature reserve.

Insider tip: Strap on your flippers – Bolata is renowned for its resplendent sea fauna and cool underwater rocks, which make it an excellent snorkelling or diving spot.

Book flights and holidays to Varna 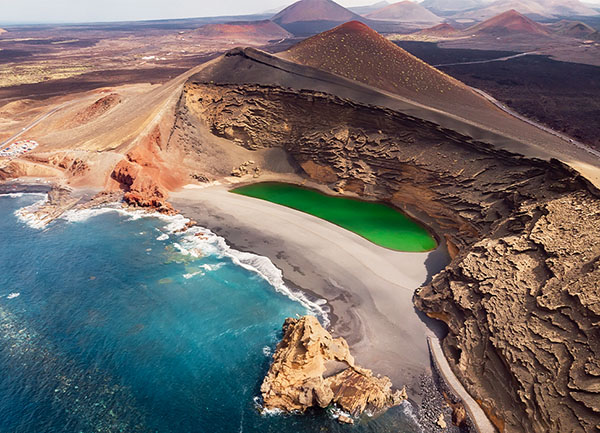 This extinct crater has a real extraterrestrial vibe about it

Lanzarote's volcanic geology makes for eerie-otherworldly landscapes that stick in your mind long after you return home. El Golfo – a small seaside village on the island's south-west coast – is classically Lanzarotan, dominated by red-black peaks that slope into a dark, sandy beach in an extinct crater. The main memento left behind by this eroded volcano is a strange, alien-green little lake, tinted a viridescent hue by the bountiful algae in the water. Not a lay-about-all-day kind of beach, but certainly a sight to behold.

Insider tip: After you've ambled around El Golfo, hop over to nearby Los Hervideros and Las Salinas de Janubio – the largest working salt pans on the Canary Islands, and both pretty cool sights themselves, with their satisfying draughts-board landscapes.

Which Greek beach is right for you?

Go island-hopping out of Pula

The best beaches in Lanzarote

The best beaches near Nice