There’s no denying it: Christmas markets are magical. The quaint wooden chalets festooned in twinkling lights selling cones of steamy chestnuts and ladles of hot spiced wine are enough to stir the yuletide spirit in Scrooge himself. But are you aware of the festivities that skew to the weird in some pockets of Europe? We’re talking 30m tall goats, logs with smiley faces and boats taking the place of Christmas trees (what!). Here are nine of best alternative winter-time festivals and markets in Europe.

Christmas fests aside, we've got an absolute frozen trough-load of winter city content. Check out our ice-cool guides to Amsterdam, Paris, Copenhagen and Helsinki. 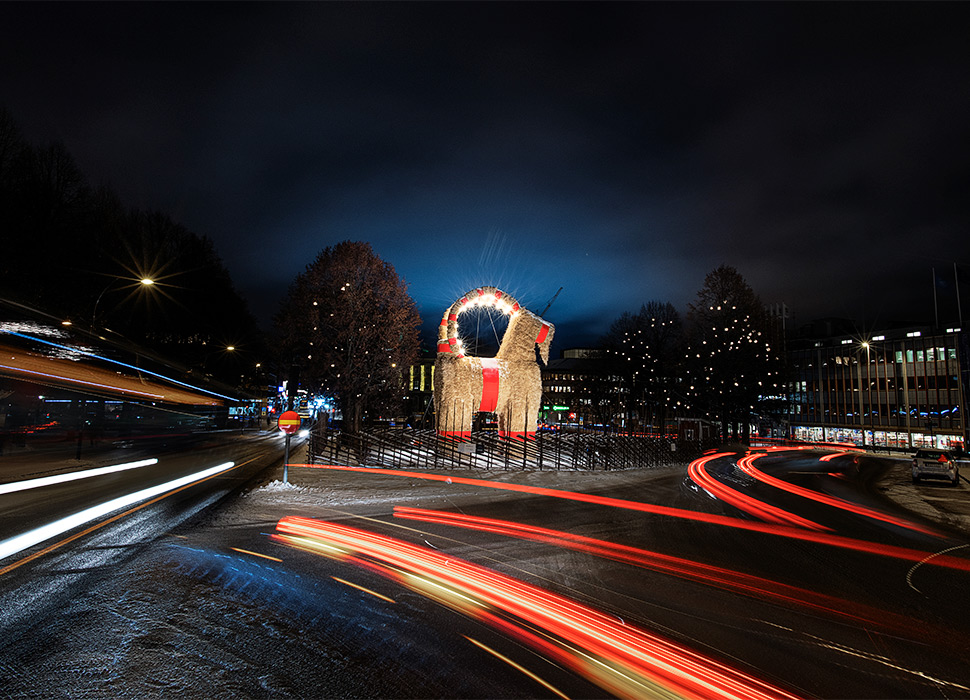 In the small town of Gävle, on the east coast of Sweden, Christmas takes on caprine qualities. Every winter since 1966, its residents have built a magnificent 30m tall straw goat – a ludicrously oversized version of the traditional Swedish Christmas straw goat. From the first Sunday of Advent every year, the Gävle goat stands in Castle Square; it's officially the world’s largest (though we're not sure how much competition it has) and first made it into the Guinness Book of Records in 1985. 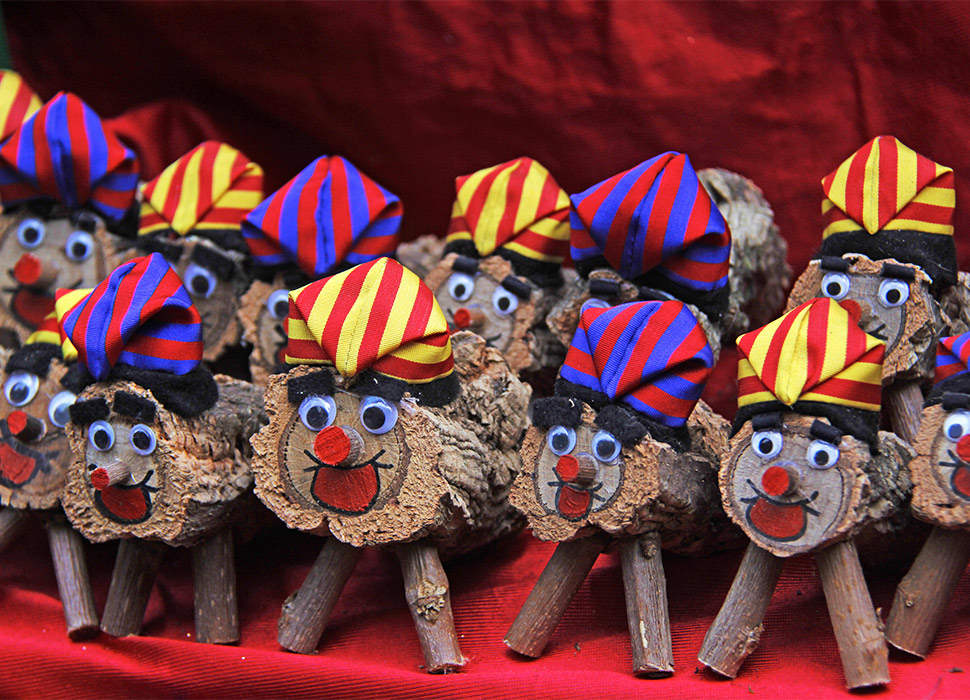 The question isn’t what, but who is Caga Tió? Imagine a giant log painted with a cheery face, normally wearing a traditional Catalan hat called a barretina. And now imagine it being bashed by hoards of excitable children until it eventually “poops” out presents (usually nougat; Caga Tió literally means the “pooping log”). It's a much anticipated holiday guest in homes and public spaces across Catalonia, where families congregate to listen to traditional music while watching the children beat it to smithereens. You can buy small Caga Tió from Christmas markets. 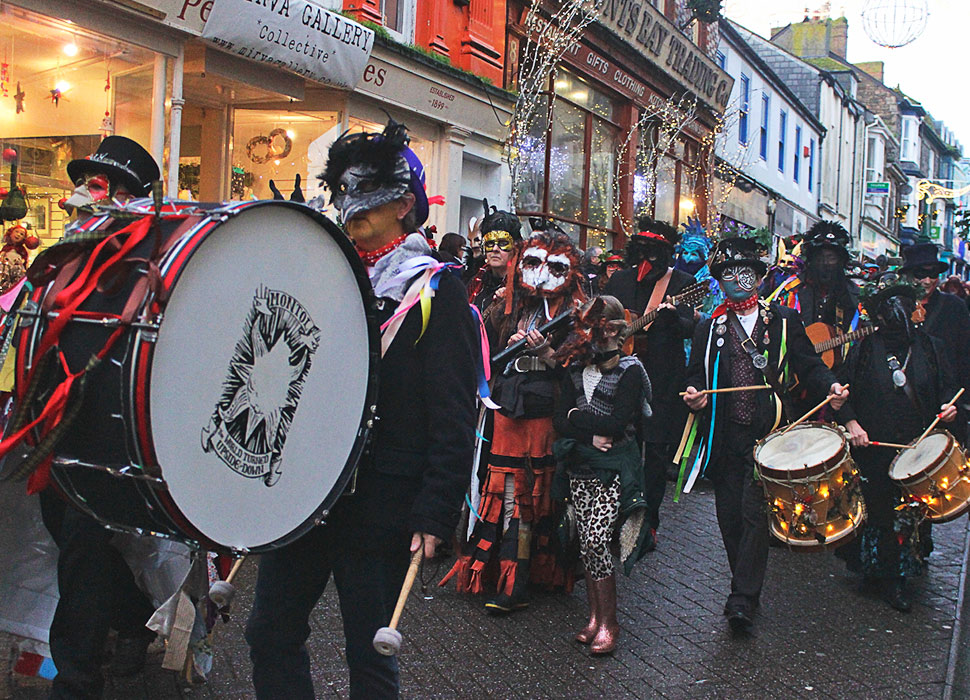 An antmospheric procession at the Montol Festival / Image: Robert Erskine

Cornwall does Christmas its own way. Where else has a festive kissing bush, gin and cake pairings, and a 500-strong 25 December sea dip? But the Montol Festival in Penzance takes things to another level of odd. Every year on 21 December, the day of the Winter Solstice, even more age-old Cornish Christmas traditions are revived. Among the usual carol singers and mulled wine stalls you'll see masked dancers, fire blowing antics and huge burning yule log on a hill. 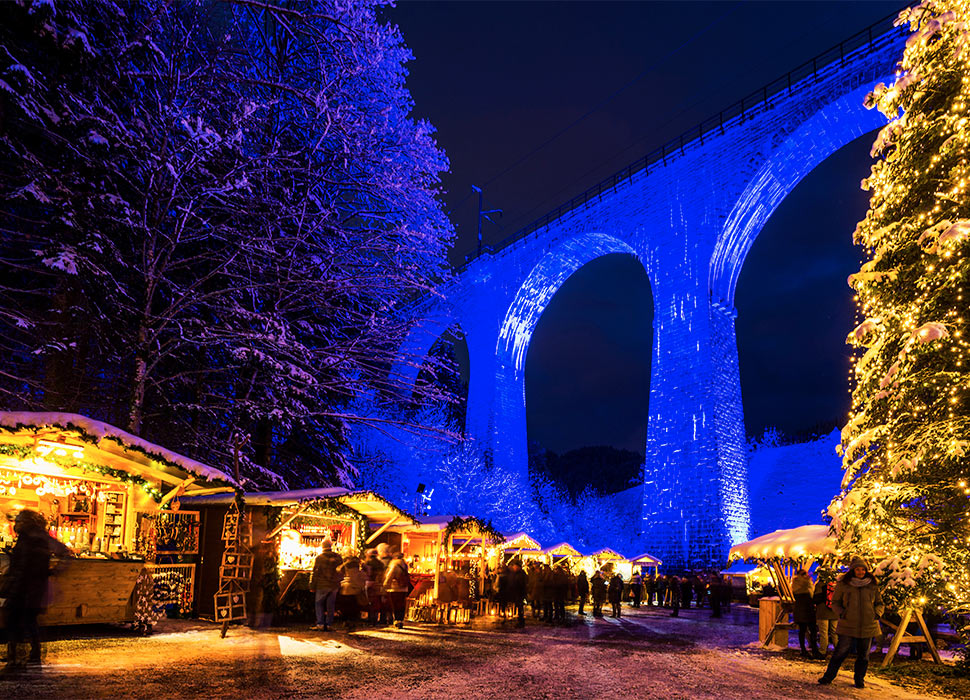 Germany nails Christmas. Major cities from Berlin to Cologne host enchanting festive markets, wafting with the sweet scent of mulled wine and sugary treats from late November. But the Ravenna Gorge Christmas Village is a little different. First of all, it’s beautiful: tucked below the stone arches of a 130-foot-high railway viaduct in the Black Forest, deep in Devil’s Valley. When you find it, expect live piano music, dramatic light shows and 40 wooden chalets selling handmade ornaments and tasty food. It only opens during Advent weekends. 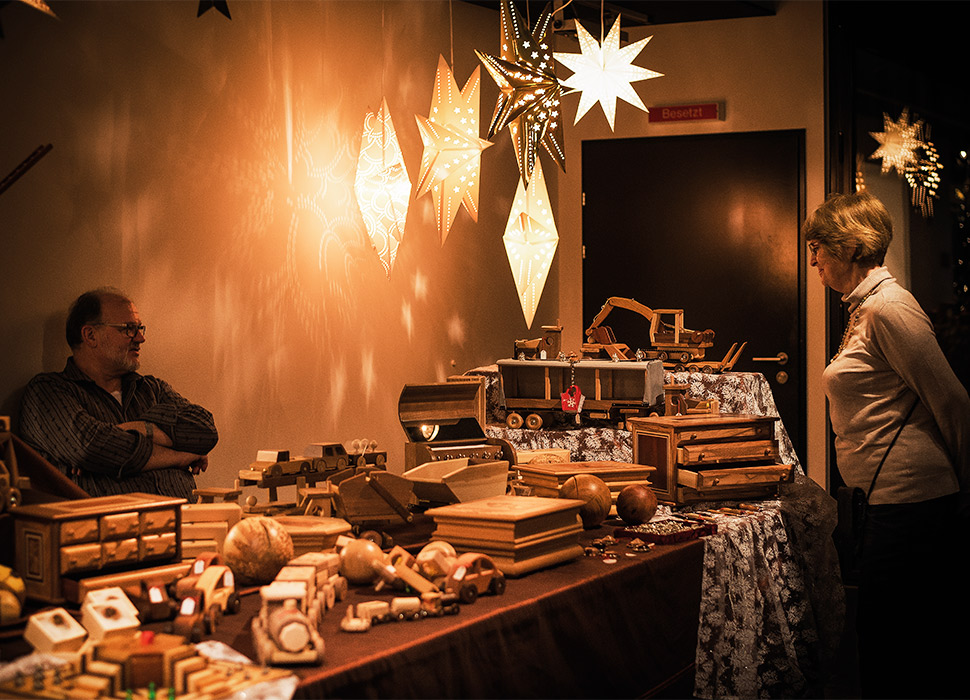 Who doesn’t love a festive market with a side of superlatives? This Christmas gathering in the clouds of Mount Pilatus is the highest in Europe, accessed via the world's steepest cogwheel railway, with magnificent views over glassy Lake Lucerne, a host of Switzerland's finest peaks and some serious Bond-villain-leaning architecture. Market stalls sell all the festive favourites, from mulled wine to gingerbread and oozy raclette. You can opt to make the return journey by sled, airboard or snow bike.

An ancient Christmas cave in Valkenburg, The Netherlands 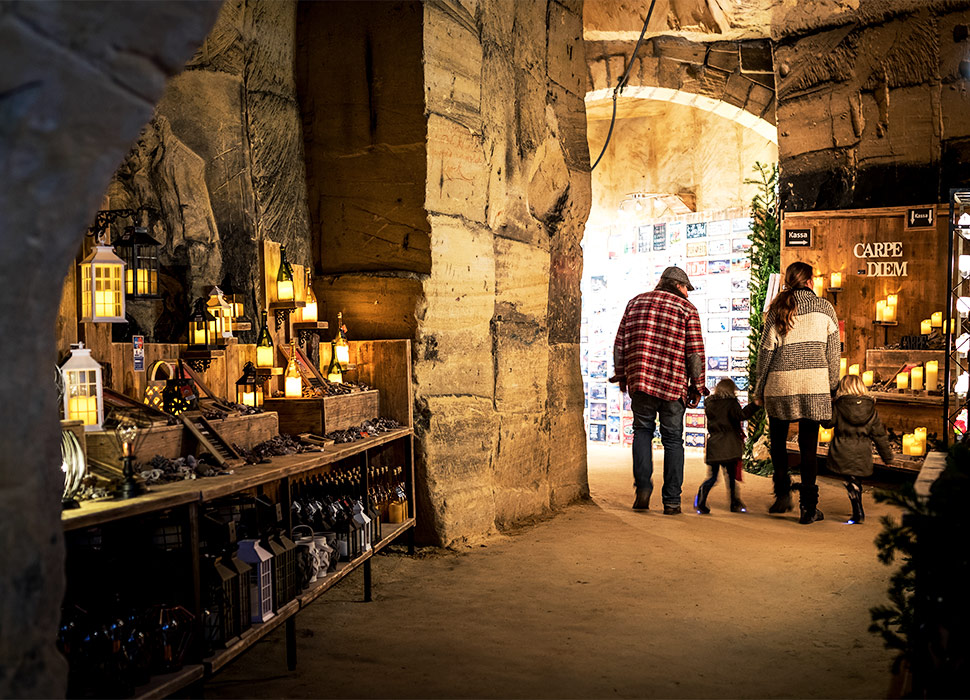 The 'Fluweelengrot' cave is home to over 50 festive stalls this time of year / Image: © Kerststad Valkenburg

Valkenburg is known in The Netherlands as “Christmas City”. Every December it puts on a solid festive show with an annual underground Christmas market inside the hillside Velvet Cave, or Fluweelengrot, dating back to Roman times and sitting underneath the ruins of Valkenburg Castle (built in 1115). Wander inside, through centuries-old yellow-tinged marlstone corridors and browse over 50 stalls bedecked with fairy lights, Christmassy souvenirs and tasty local food. There’s also festive cave art and a café in an 18th century chapel. 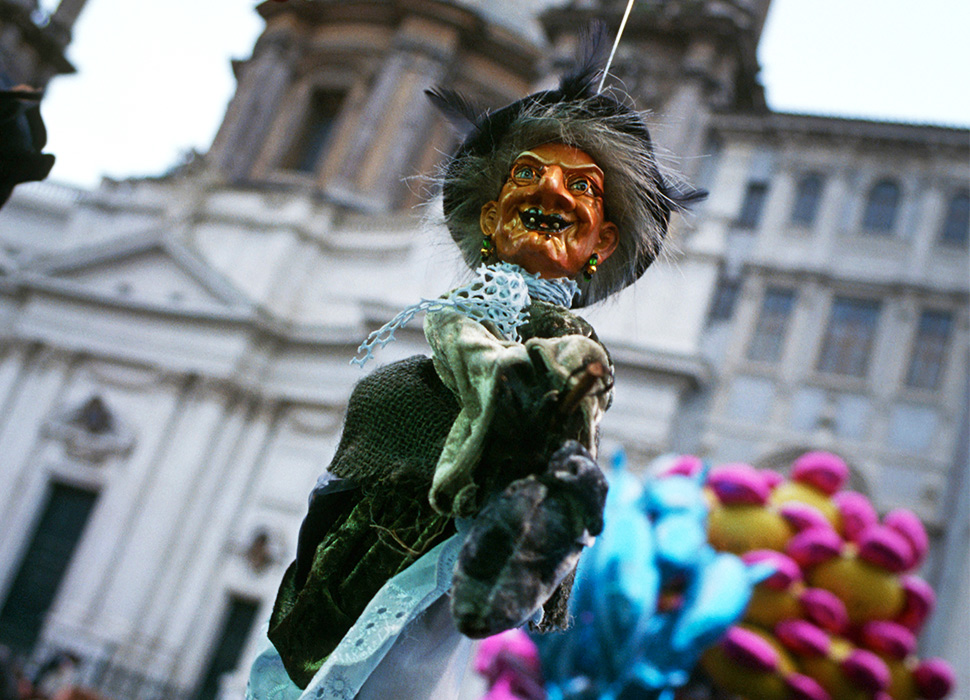 If you find yourself at a Christmas market in Italy, such as Piazza Navona in Rome, look out for an elderly Christmas witch stealing the limelight from Santa Claus. According to Italian folklore she’s called Befana and delivers gifts to children around the country on Epiphany Eve (the night of 5 January). The name derives from the word "epifania" and she’s been working the festive scene since the 13th century. Befana's easy to spot, too – she carries a broomstick and wears a red handkerchief on her head, plus a patchwork dress. 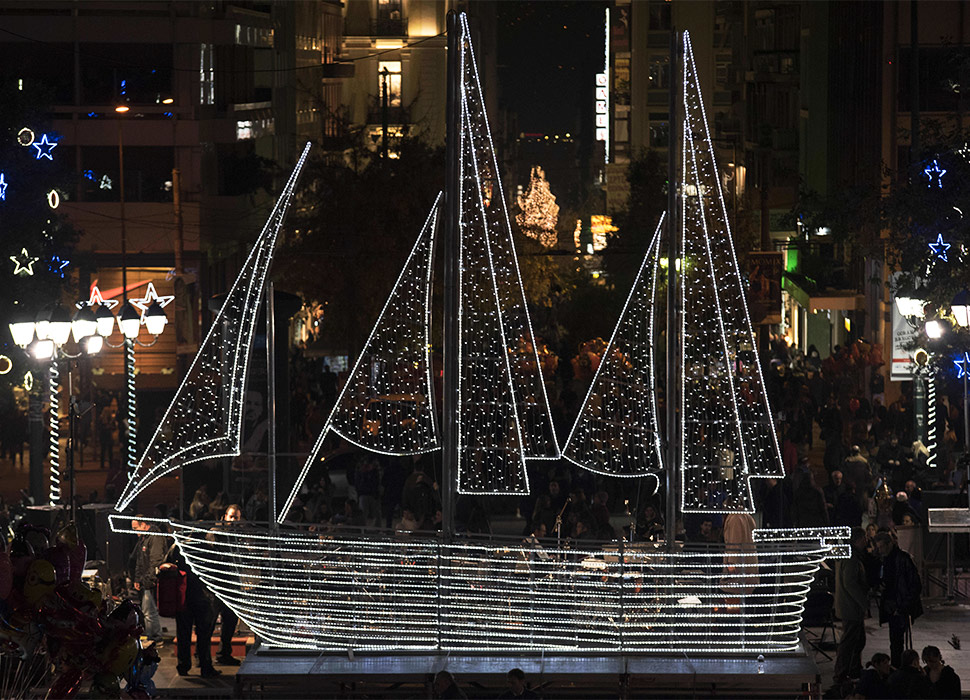 Greece tends to celebrate Christmas by honouring both Greek Santa and North Pole Santa. In Eastern Orthodox tradition, the saint most associated with the giving of gifts at Christmas is not Saint Nicholas, but Basil the Great – aka “Aghios Vasilis” or "Saint Basil". But Saint Nicholas is the patron saint of sailors in Greece, so he's honoured during the festive period with sailing boats smothered in fairy lights. Christmas boats or karavaki often replace Christmass trees and in Athens you’ll see their sparkling hulls docked up all over the place.

A beloved Santa proxy in Amsterdam, The Netherlands 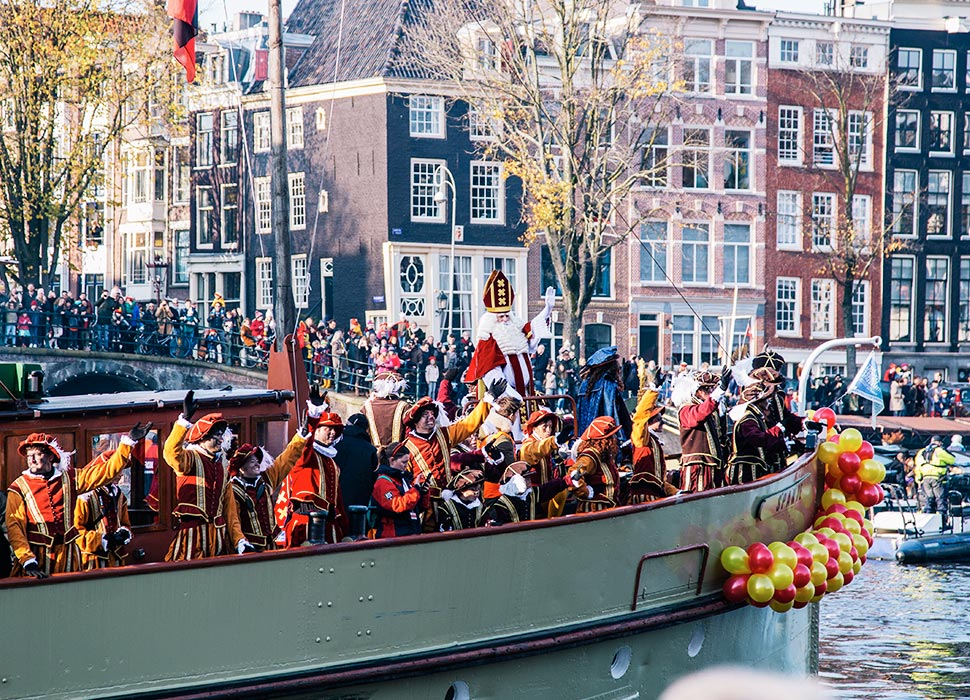 He might look like a cross between Father Christmas and an Archbishop, but Sinterklaas (meaning Saint Nicholas) is a traditional Dutch character adored by children. He sails along Amsterdam’s canals in mid-November, giving out spiced biscuits and being heralded by up to 400,000 spirited spectators. Expect music, dancing and cheer, plus a slightly dubious side-kick in the form of Zwarte Piet (Black Pete) who's been the source of much racial controversy in recent years, though the Dutch attest that his face is merely covered in soot from chimneys. 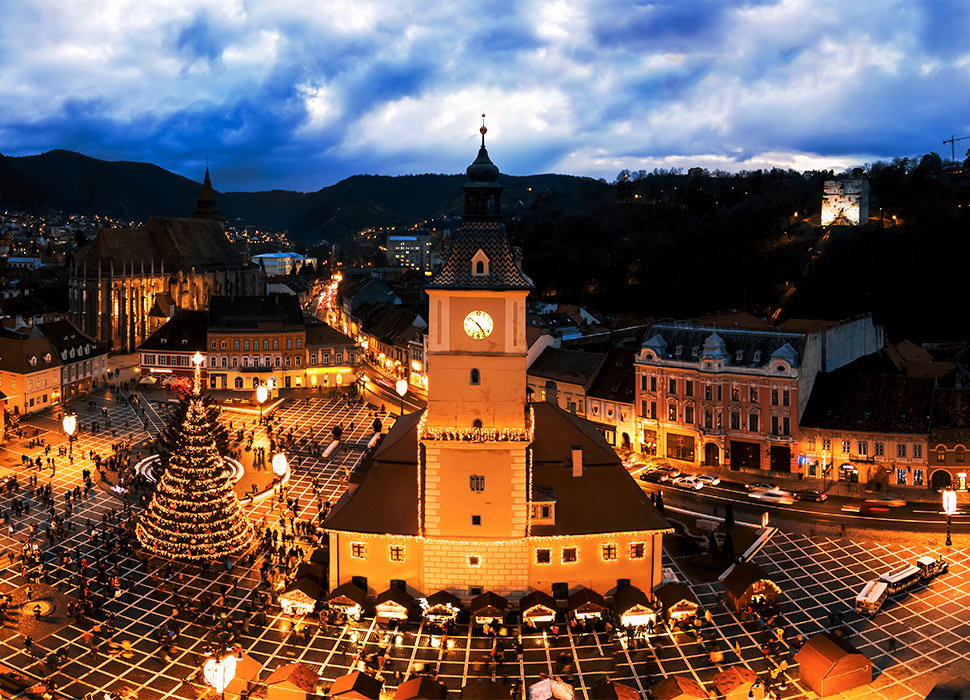 Thanks to its associations with a certain vampire, Transylvania probably isn’t the first place that comes to mind for a Christmas holiday. But Brasov, a Medieval Saxon city surrounded by the sublime slopes of the Carpathian Mountains, is a winter paradise. The frosty season here starts from November 30 and lasts until January 8 when the Christmas market is in full swing. It’s neat chalets in the city square sell charmingly presented artisanal gifts and sweet-smelling food. But, what makes Brasov unique is its alluring mix of Gothic splendour and winsome charm. You’d be hard-pressed to find another Christmas town that manages to merge cookie-cutter lights and displays with bombastic Medieval architecture and a looming snow-capped forest (brilliant for skiing and hiking). 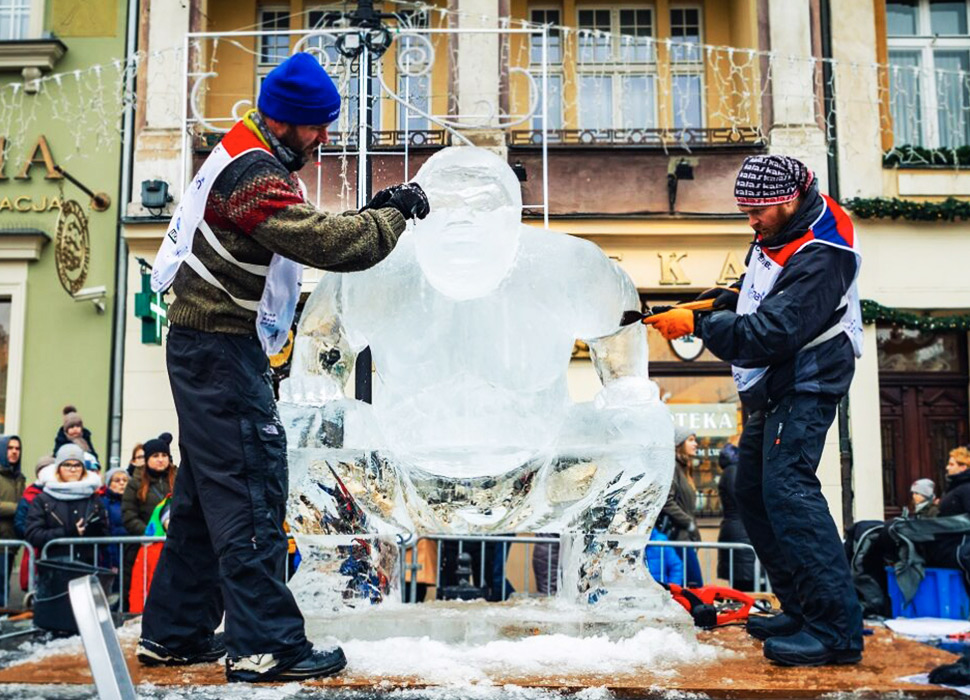 Hugging the Warta river in western Poland, Poznań is a city of Renaissance-style buildings, grand market squares and fun eccentricities – like its town hall clock which launches out two mechanical goats to butt heads at noon. Like most pretty European cities, come Christmas it’s a sea of enchanting festive cuteness. But there’s another reason to visit. Every year it hosts the International Ice Sculpture Festival (December 9-11 2022) where talented (and hardy) whittlers from all over the world head to Poznań Expo to chip huge slabs of ice into glistening forms. All kinds of creations are chiseled from the ice, from Christmas scenes to mythical creatures. The results are staggering and there are also speed-carving competitions to up the ante. Grab a steaming glass of mulled wine and watch the shards fly. 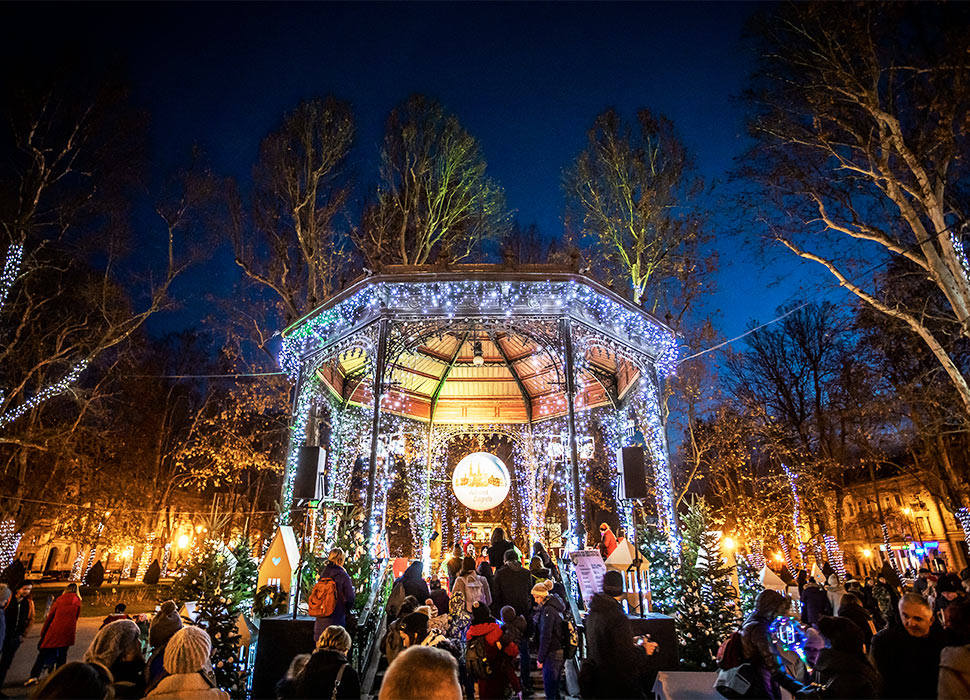 Hidden below Mount Medvednica where the Alpine foothills meet the Pannonian plains, the Croatian city of Zagreb has something new to offer around every corner. From the hilly Upper Town with its grand Habsburg-era buildings to the flat streets of the Lower Town with lively bars and restaurants. Its festive celebrations, which occupy the whole season of advent, takeover every inch of the city’s unique tapestry. Its Advent Festival smatters Zagreb with immersive attractions, events and performances. The epicentre is a huge concert stage in the main square surrounded by gingerbread house chalets and a giant Christmas tree. But, make sure to explore the side streets where you’ll stumble across live music and light displays.

The best places to ski in the UK