The most spectacular ski runs in Europe

Hit the slopes in style. From heart-stopping black runs for seasoned piste-rats, to (slightly) more serenely red and blue routes, these are the very best slopes and terrains going for ski holidays with spectacular views

Sublime snow-capped mountains, towering fir trees, cosy wooden chalets and Blue Bird skies: it’s no secret that the ski world is home to some of the most utterly spectacular scenery in Europe. But, don’t be fooled that the most dramatic sights are only available to expert snow sliders ready to launch themselves down challenging black runs.

There are plenty of incredible mountainsides dotted across the continent that don’t require your heart to be in your mouth in order to fill your eyes with sumptuous panoramas. Whether you want to ski cross country or amble down easy-going routes, here's our pick of the finest-looking runs in Europe – both for those who want bragging rights and for those who simply want to, y’know, enjoy themselves.

Fancy a snow sports holiday that’s out of the ordinary? These are the best alternative ski resorts in Europe.

Or perhaps you want that powder with the least possible exertion, time-wise? Here are some brilliant ski resorts you can reach in three hours or less. 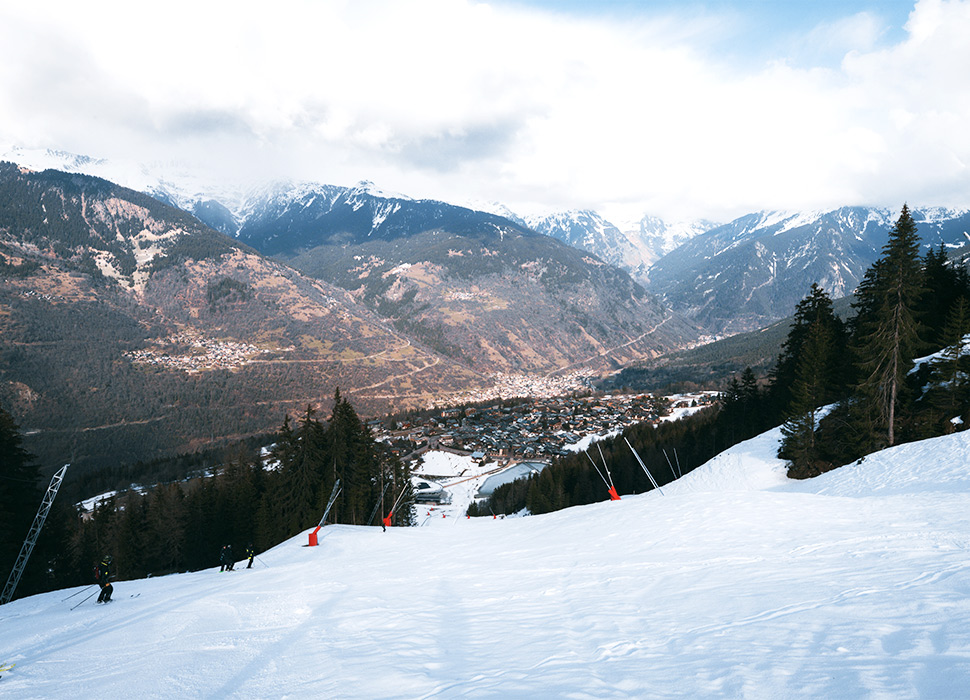 In alpine skiing, there’s no bigger stage than the World Championships. Held every two years in different resorts around the world, they’re a 15-day-long speed-fest featuring some of the fastest skiers on the planet. And in honour of them coming to Courchevel and Méribel for the first time, the clever mountain folk have created a whole new, super-challenging downhill run for the racers. Called L'Eclipse, it starts from the Col de la Loze, is 3.3km long and has an incline of up to 30%. Why are we telling you this? Because from this winter, it’s open to regular (but still expert) skiers.

✈ Fly to Geneva or Lyon 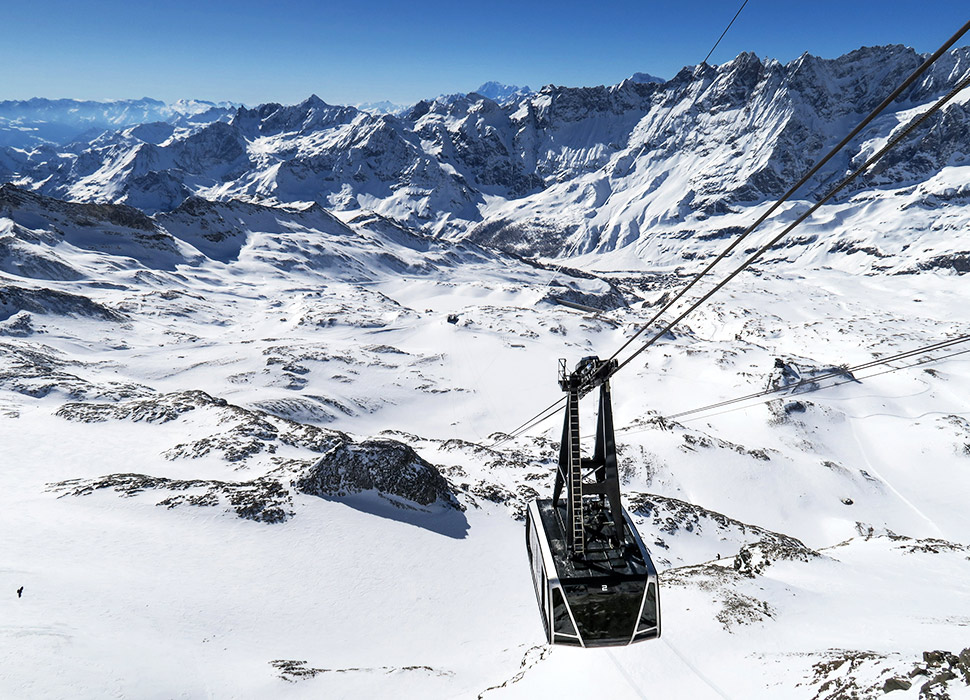 This run may not have an evocative name, but what it lacks in branding it makes up for in style and elegance. Starting from the Plateau Rosa, a glacier straddling the Italian-Swiss border at 3,400m, the views are sublime before it finishes, 22km later, among the trees in Valtournenche. In one direction is the Swiss resort of Zermatt, in the middle is the mighty Matterhorn, and rolling away from you is the Cervinia valley, with Mont Blanc and Gran Paradiso in the distance. A real treat for the eyes. 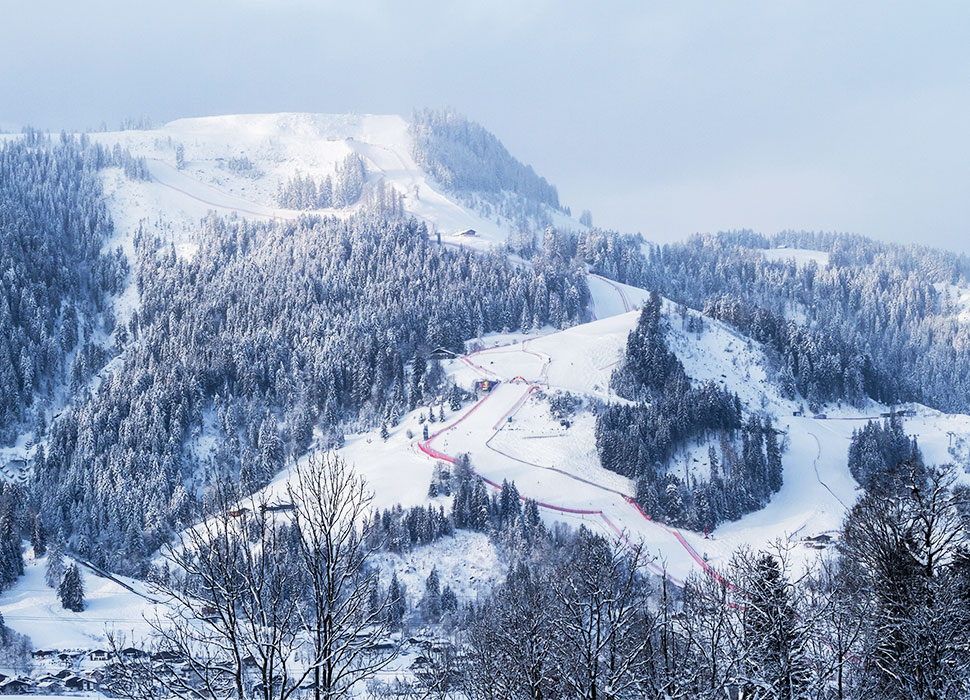 The Streif run is famous for causing exactly that / Image: Adobe Stock

Spoken of in hushed tones, the Streif is one of the most terrifying, death-defying and technically-demanding runs in the world. Known to reduce even the most expert of skiers to trembling leaves when it rolls round on the World Cup circuit, it's a huge crowd pleaser – the party atmosphere in Kitzbühel is off the scale as the town is filled with the sound of cow bells being shaken enthusiastically. Over 3km in length, with an average gradient of 27% and jumps of up to 80 metres, the time to beat is Fitz Strobl’s 1997 record of 1:51.58 minutes.

✈ Fly to Innsbruck or Munich 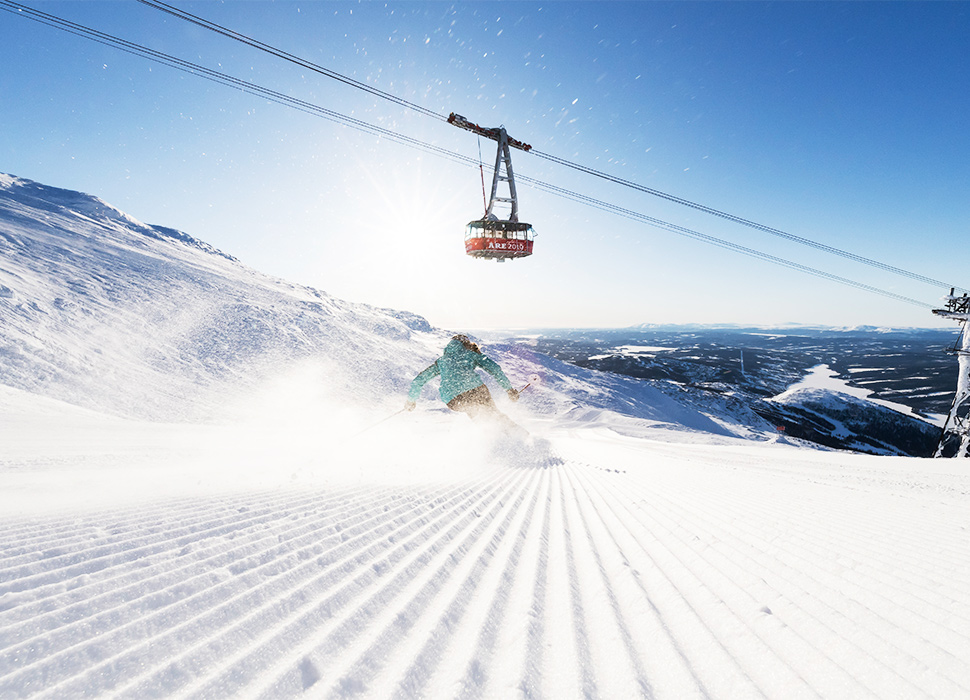 One for the less faint-hearted and cautious, but who still enjoy a good vista when they see one, the Åre run is all about the location. This artificial slope is in the centre of Stockholm at Hammarbybacken, where there are five runs, a terrain park, a beginners' area and a vertical drop of just 83 metres. What it lacks in peril it makes up for in convenience and great views – particularly in the evening as the lights of the city twinkle around it. 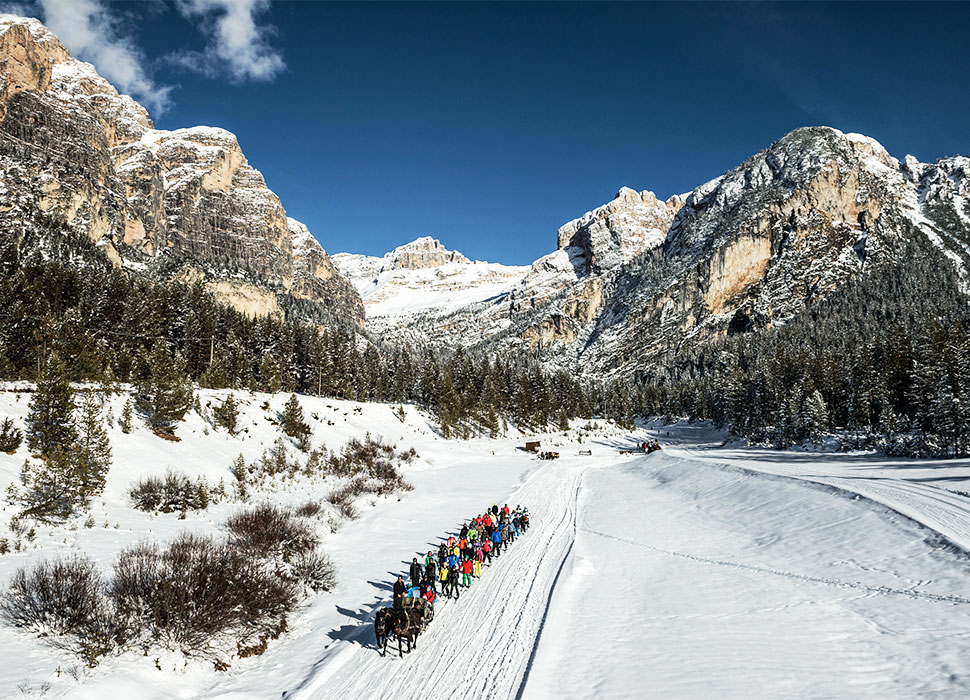 It’s not everyday you get to be dragged along on your skis by a horse-drawn carriage – but that’s exactly what happens at the end of the Armentarola red run in the Dolomites. Known locally as the hidden valley, Armentarola is quite possibly one of the most beautiful runs in the world – a not-overly-technical red, it starts from Mount Lagazuoi at 2,835m and descends for 8.5km past ice falls, centuries-old pines and rock faces before arriving at Sas Dlacia, where your horse-drawn carriage awaits to return you to civilisation. 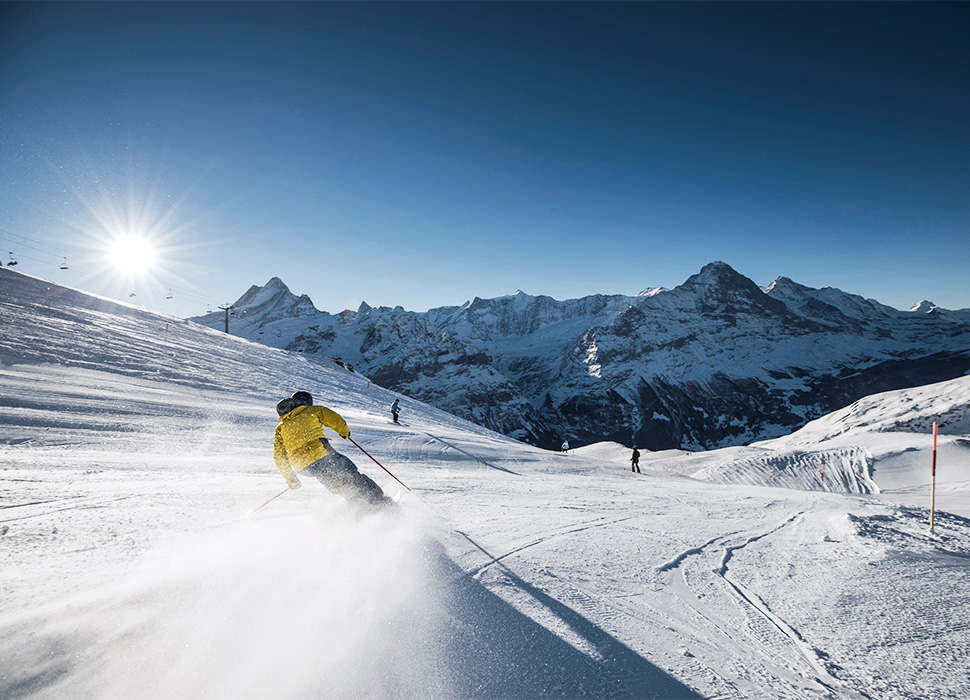 The Lauberhorn might be the world's longest downhill race course – but it's also perfectly manageable for plebs / Image: jungfrau.ch

The Lauberhorn oozes with history; its founder, Ernst Gertsch created it to prove the Swiss could beat the British, which they promptly did. First raced in 1930, the course highlight is its signature jump, the Hundschopf, in the shadow of the resort’s three famous peaks – the Eiger, Mönch and Jungfrau. Despite being the longest downhill race course in the world (at 4.48km), the Lauberhorn is actually only a red run and, when not tackled at near warp speed, surprisingly manageable for intermediate skiers. 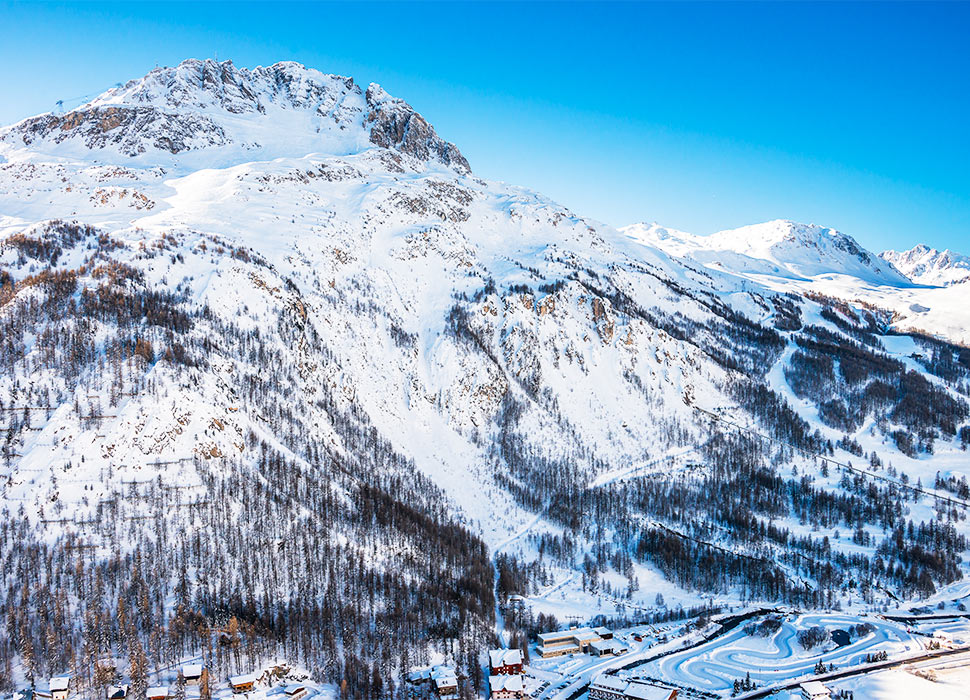 In a prime position above the fashionable resort of Val d’Isère, La Face is do or die. A steep black, 3km in length, it gained notoriety at the 1992 Albertville Winter Olympics, where it hosted the men’s downhill and was roundly complained about for being too steep for a downhill course (and better suited to a Super G). Justified or not, if you’re tempted to tackle it, it’s the bottom third you need to brace yourself for – the top section is actually a lovely, swooping piste round the Bellevarde shoulder.

✈ Fly to Geneva or Lyon 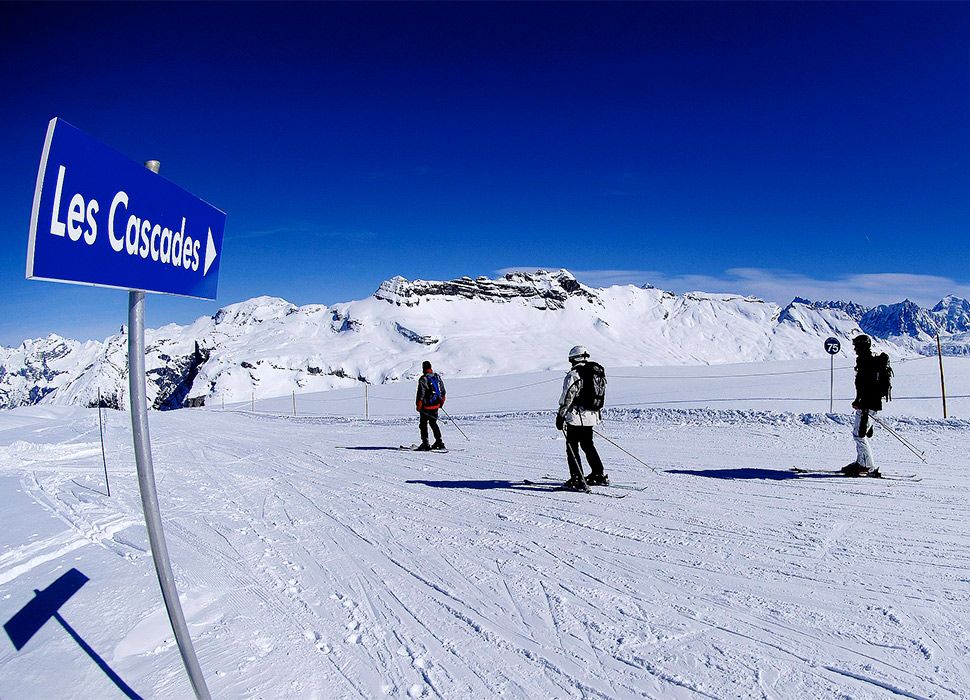 A ski run where you’re more likely to see ibex and chamois than racing jumps and gravity-defying gradients, Les Cascades is a 14km-long blue run in Flaine. Make a whole day of it – it starts from Tête Pelouse at 2,474m and swoops down across broad open slopes before winding its way through the trees and finishing at the small village of Sixt-Fer-à-Cheval, 1,700 metres lower. It’s a proper cruising blue through the Sixt Nature Reserve and not in the least bit hairy. 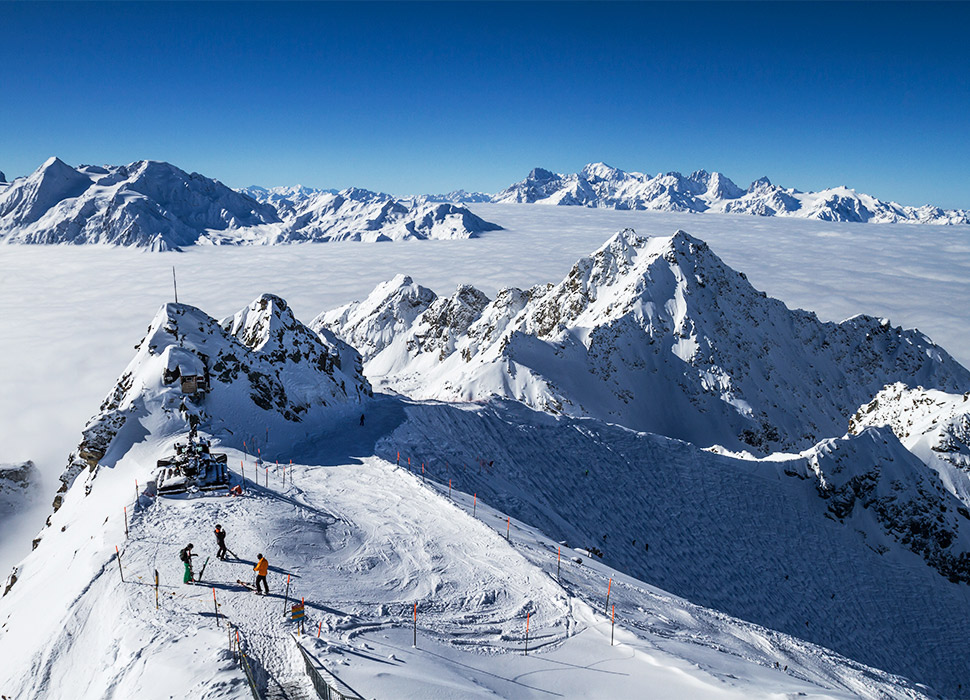 This bumpy black run is as hard as the mountain's name / Image: © Verbier 4Vallées

Mont Fort translates as 'hard' or 'strong mountain'. How apt – this peak, the highest in Verbier at 3,300m, is also the name of the black run that descends down its front and is covered with huge lumpy moguls. It’s as if all the cows from the valley below have walked up the mountain and sat down on the piste, and it’s your job to find a route round their backsides to reach the end. Sounds wild, but judging by the number of people who attempt it, it must be fun too. 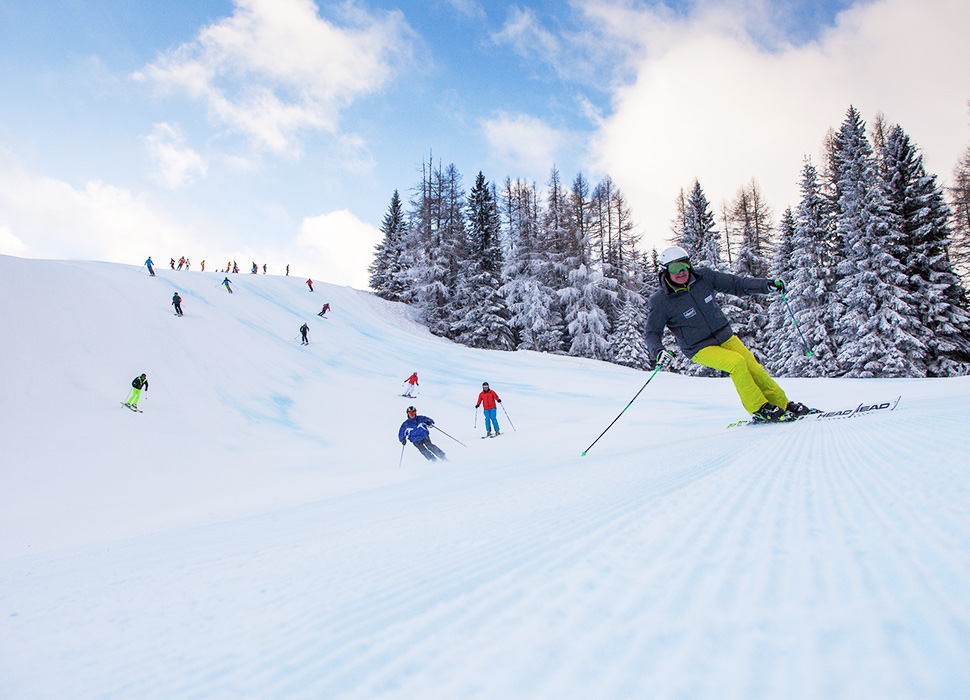 When a run is designed by and named after the greatest downhill skier the world has ever seen, it’s not likely to be a gentle blue. Franz Klammer dominated downhill skiing in the '70s, winning 26 World Cup races and putting in a legendary performance at the 1976 Innsbruck Winter Olympics to take the gold. Here in his home resort of Bad Kleinkirchheim, wannabe contenders for his crown can take to the Franz Klammer black run. It's 3.2 kilometres long; steep, narrow and intrinsically fast. The course record is 1:38 minutes – we don’t recommend attempting that.