No word of a lie – these sights are all at the end of an easyJet flight. Pick your jaw off the floor and put them on your bucket list

The world has some amazing sights. But the problem with the world is that most of it is really far away. But we've got some great news – you don't need to empty your bank account and traverse continents to have your mind broadened and your eyes well and truly opened. Cast your eyes over the stunning landscapes below and you might be surprised to know they're not at the end of a long-haul flight, but are all to be found resplendent in corners of our own Europe. Read on and discover where these amazing phenomena can be found – and imagine how easy it would be to get there yourself. 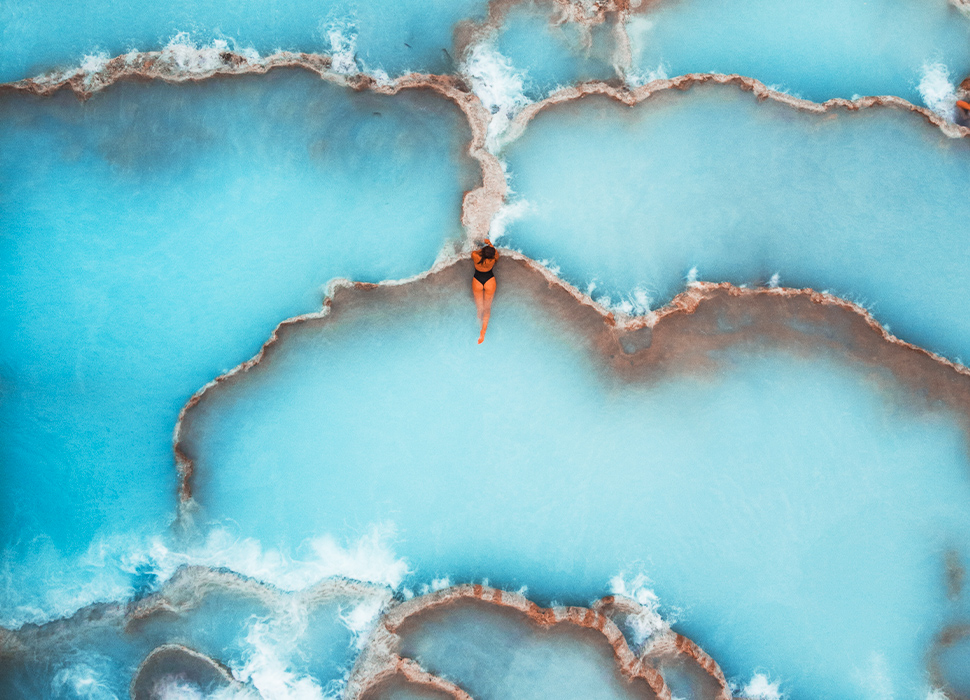 WHAT Some natural hot springs get all the glory – we’re looking at you, Iceland's Blue Lagoon – while others pass under the radar. Saturnia thermal baths are, somehow, not that well-known outside Italy, despite being free to visit, surrounded by idyllic countryside and open for a shvitz 24 hours a day, seven days a week. Seen from above, the tiered, volcano-powered rock pools – burnished white by an abundance of minerals – look like the moonscapes of Atacama or Bolivia. You’ll find plenty holidaying Italians lounging in the 37°C waters, but if you want to beat the crowds opt for a crack-of-dawn dip.

HOW TO GET THERE A two-hour drive north from Rome. 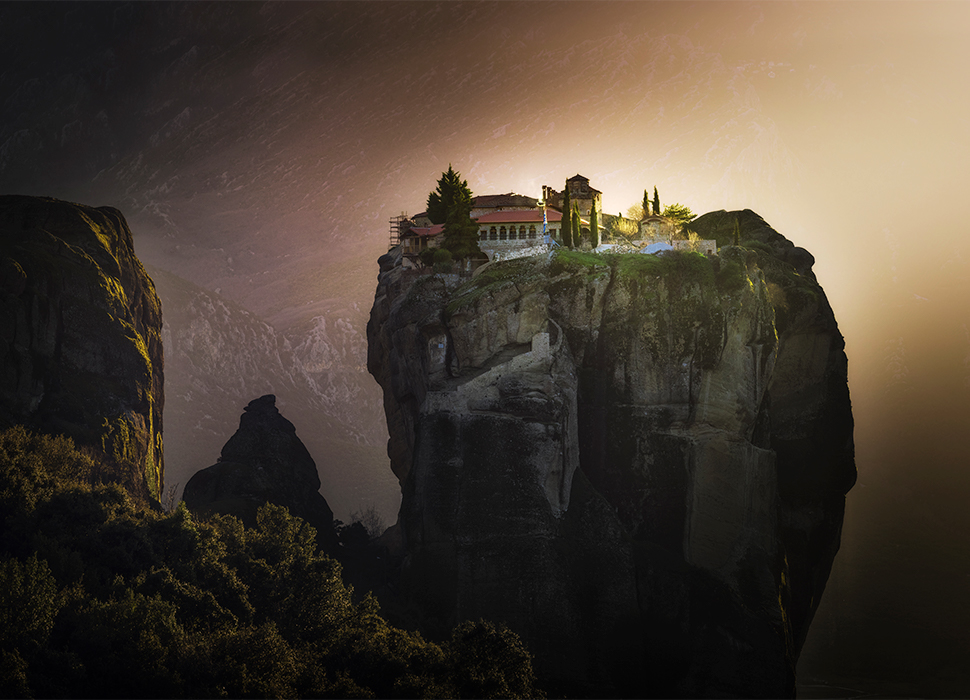 Top of the rock: the Meteora monasteries in Greece / Photo: Getty Images

WHAT Those precipitous, mist-shrouded, monastery-topped sandstone columns you’re looking at aren’t in Bhutan or Tibet. Nope, they’re in far more accessible Greece, in the foothills of the Pindus mountains. While the religious complex of Mount Athos is the country’s most hallowed, these 'suspended rocks' (as the name translates to) are arguably more breathtaking. Hermit monks first started scaling the pillars around the 10th century as a way of avoiding invading Ottomans; by the late 16th century there were 24 monasteries dotted across the rocks, though only six remain today. Their fresco-heavy enclaves – as well as a number of dinkier ruined monasteries and hermitages – can all be visited by organised tour.

HOW TO GET THERE A couple of hours drive northwest of Volos.

The Pink Lake of Torrevieja 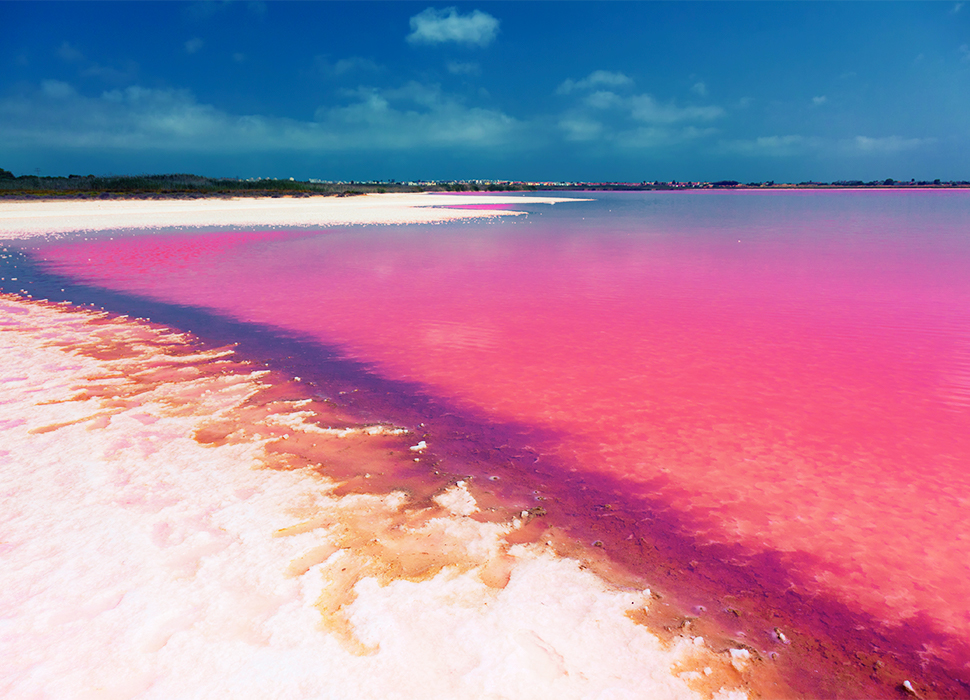 WHAT This Instagram-famous lake has three times the pink power of your bog-standard rose-tinted waterway: twice, because it’s actually two lakes, and thrice, because a flamboyance of flamingos hang around and feast on the algae-rich shrimp that live there. Its eye-catching bubblegum hue is conjured up by the presence of salt bacterium and micro-algae, which mix together to make the lake look like a scoop of melted strawberry ice cream. But who cares about the science: it looks cool, and the warm water’s high salt concentration means swimmers can float about easily.

HOW TO GET THERE Easily accessible from Murcia or Alicante.

✈ Fly to Murcia or Alicante – book flights and holidays 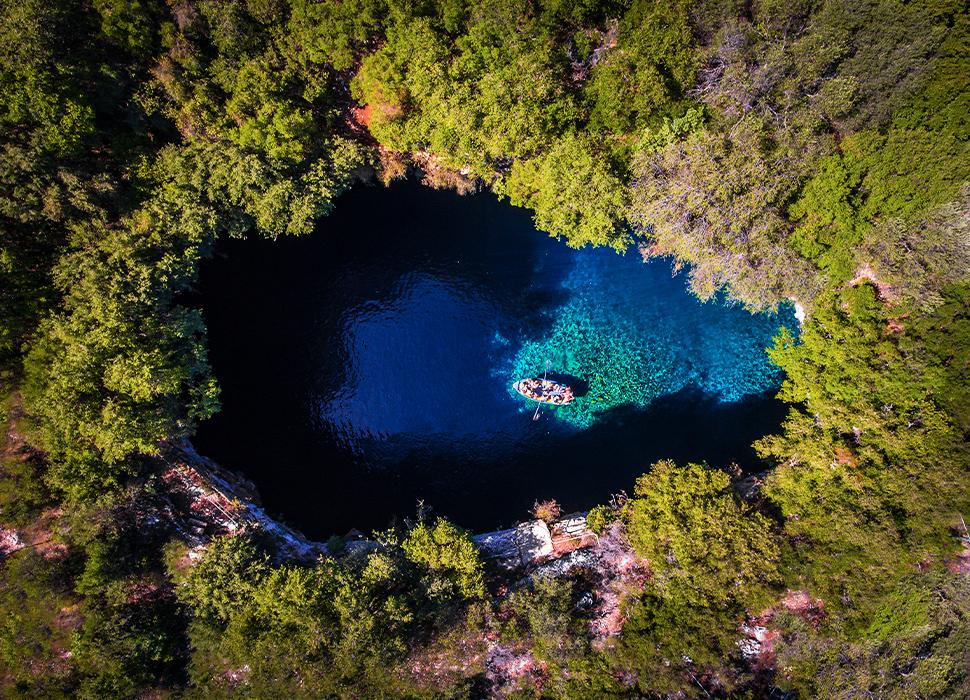 WHAT This ancient cave is all your Ionian fantasies come to life: azure water, verdant cliffs, air heavy with the scent of myth. Legend has it that the name ‘Melissani’ comes from the unhappy water nymph who drowned herself when the mean Greek god Pan refused her affections, and the cave has featured in lots of other mythological tales. You can see what all the fuss is about by catching a boat from nearby Karavomilos and rowing through the 3.5km-long grotto into the glinting green-blue lake within. Look up and be dazzled by the soaring walls of the cave, dripping with 2,000-year-old stalactites and opening out to the sky, like a sort of prehistoric sunroof.

HOW TO GET THERE It's on the other side of the island from Argostoli, the main town. 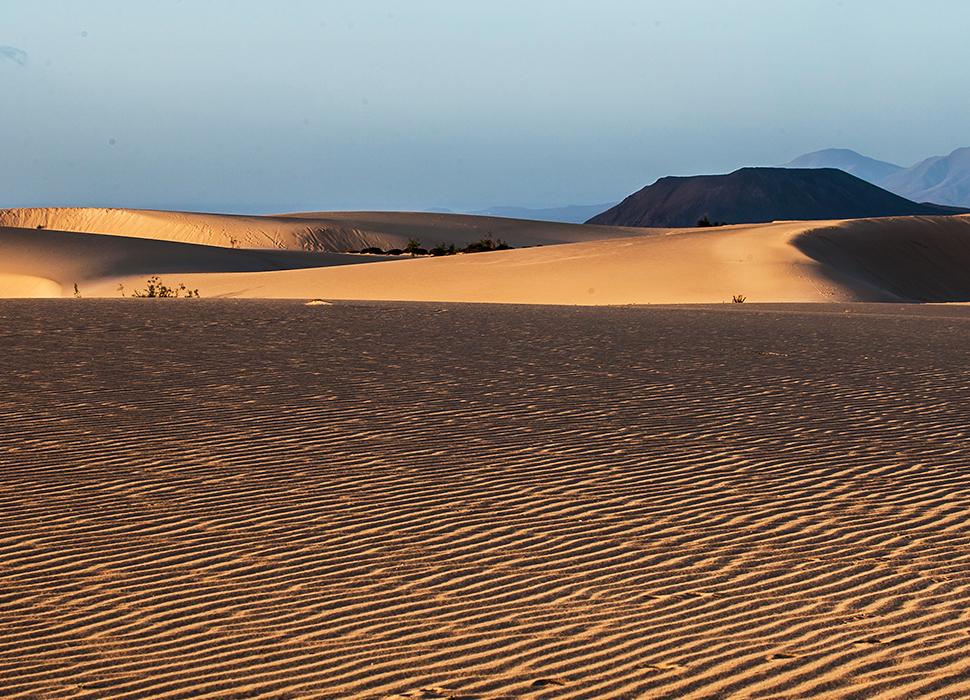 WHAT Dreaming of getting away from it all? Parque Natural de Corralejo is a good place to start. This otherworldly national park at the tip of the isle of Fuerteventura looks more like the Namib Desert than somewhere you’d find at the end of a four-hour flight. Its 10.4 square miles are home to enormous shifting sand dunes backdropped by black volcanic mountains and stretches of sparsely populated beaches, all baking under a hot Canaries sun. It’s far from lifeless, though – the varied wildlife includes the very rare houbara bustard, which you might spot pecking around in the rocks. Just don’t get lost out there…

HOW TO GET THERE Just 20 minutes by car from the main town of Puerto del Rosario. 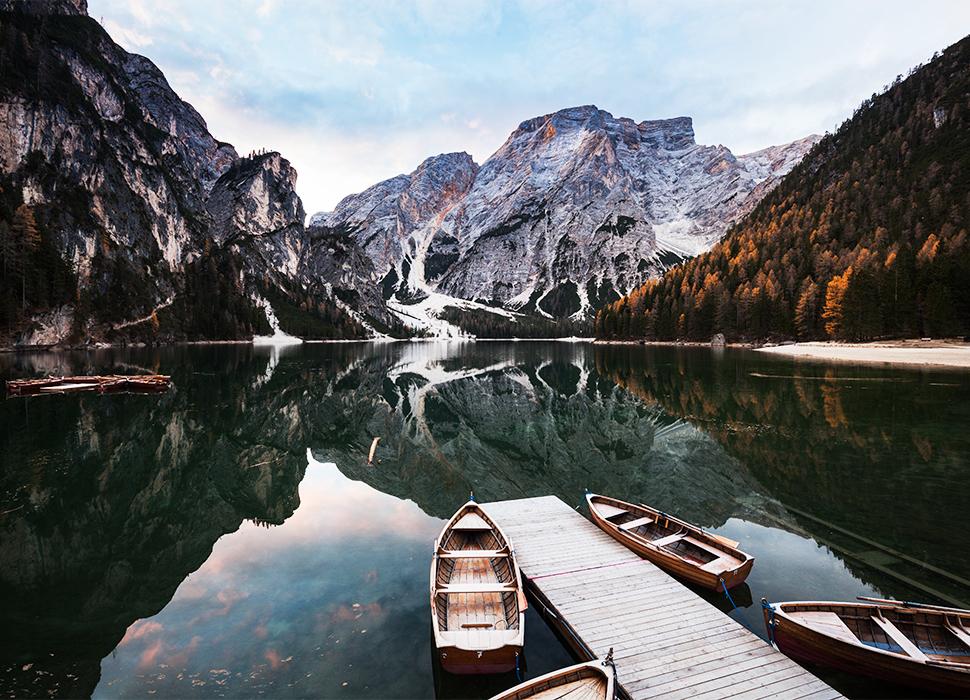 Is there a lovelier lake in Europe? / Photo: Adobe Stock

WHAT You’ll run out of ways to say ‘wow’ at the Lago di Braies, the postcard lake of imagination. This perfect arrangement of mountain, water, forest and sky reminds us what we love so much about the central European landscape. There are hiking trails around the lake, but the best way to experience it is to hire a boat and float out into the middle. The fact that the craggy Dolomite peaks above are often reflected in the serene waters basically means you’re getting double the eye candy too.

HOW TO GET THERE It's pretty remote – about an hour's drive from the nearest town, Cortina d'Ampezzo. 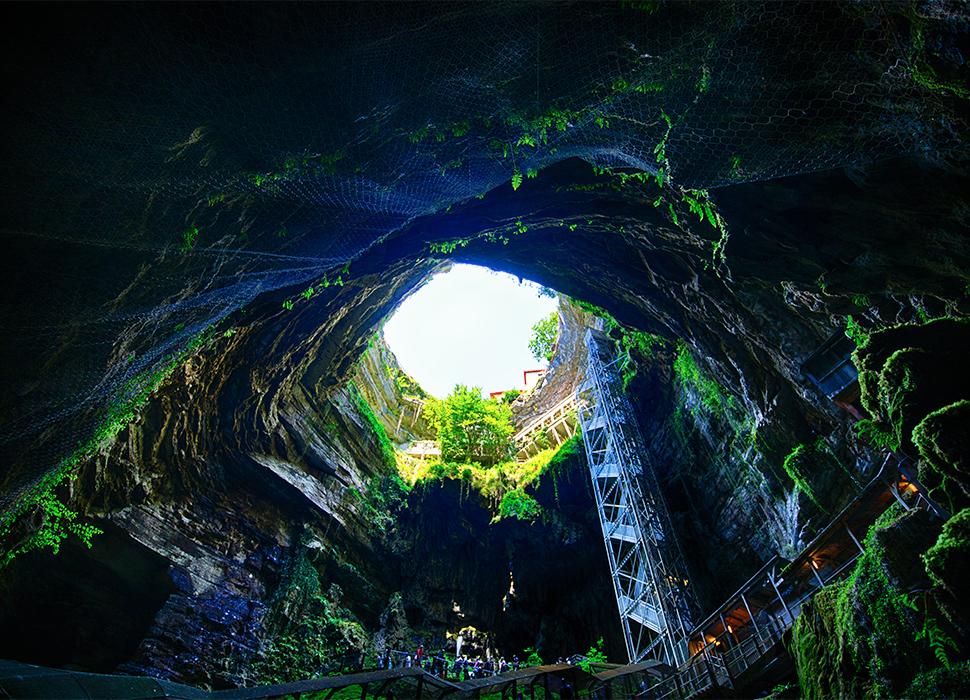 It's a long way to the top… / Photo: Adobe Stock

WHAT In the Dordogne region, right in the middle of France, at the edge of a huge national park, is an entrance to the centre of the Earth. That’s how it might feel when you’re gazing into the Padirac cave, one of the largest chasms in Europe, and a geological wonder that has to be seen to be believed. But the hole is just the beginning – once inside, take a boat ride along the 100m-deep river and check out the spectacular limestone rock formations twisting and dripping above the eerily still ‘Rain Lake’. “You must go in without fear,” said Édouard-Alfred Martel, 19th-century explorer of the caves – “who knows what surprises await you.” You first, then…

HOW TO GET THERE Presumably you'll be pootling around the French countryside anyway – it's about equidistant between Lyon, Bordeaux and Toulouse. 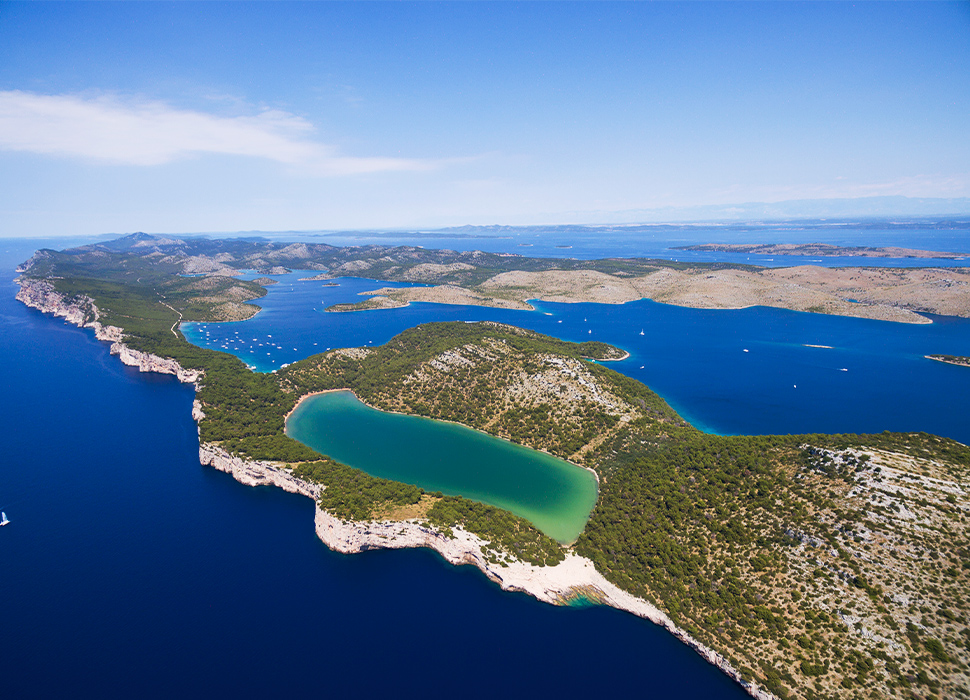 WHERE Off the coast of Zadar in Croatia.

WHAT ‘Dugi Otok’ translates to ‘long island’ – and yeah, it’s long: 45km of bone-white limestone draped with dense scrub and woodland, but even more remarkable is the enormous lake at its centre. Lake Mir's dazzling, mineral-rich waters are said to have healing properties, so make sure you take a dip. You’ll also want to have a paddle in turquoise-hued Telašćica Bay, which rivals the lake as the island’s crown jewel. In the north of Dugi Otok you’ll find a patchwork of vineyards, orchards and olive groves, and what's more, the whole place smells like mint and rosemary. It is, in a word, idyllic.

HOW TO GET THERE Hop on the 1hr 20min ferry from Zadar. 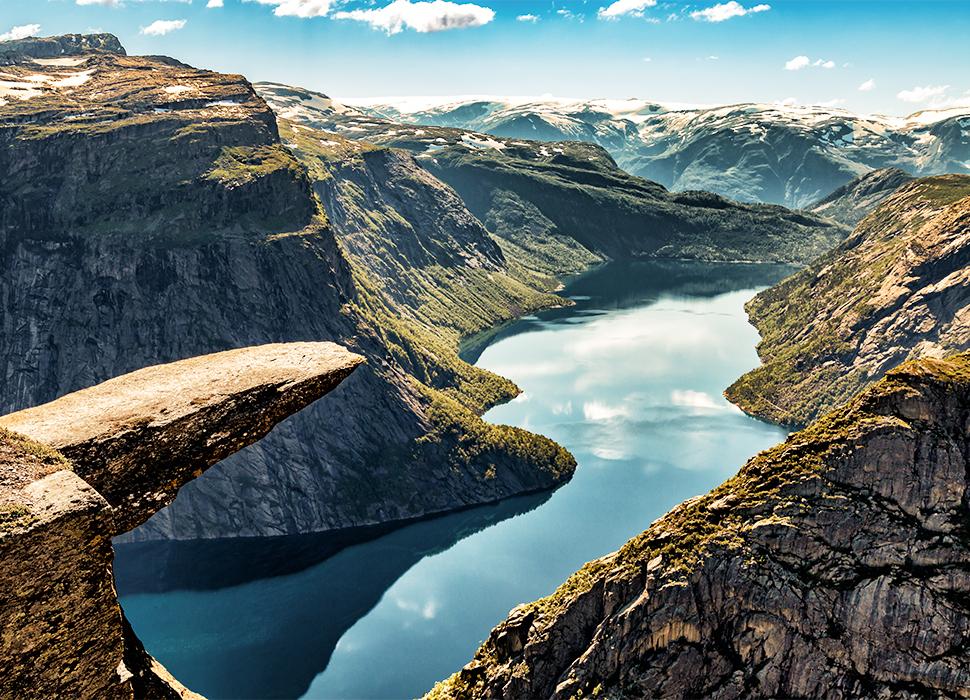 The ultimate Insta-opportunity, if you can get there / Photo: Adobe Stock

WHAT Rugged Nordic icon and absolute terror to the vertiginous, Trolltunga – literally, 'troll’s tongue' – is a spit of rock jutting out of a mountain, with a 700m drop to Ringedalsvatnet lake below (there are no rails). Reaching it isn’t easy: it’s a tough hike even after you've driven four hours from Oslo, but utterly worth the schlep for the ludicrously beautiful panoramas of shining waters, mossy crags and snow-covered peaks. Lots of places claim to have the kind of scenery seemingly drawn straight from the pages of a fantasy novel, but this is the real deal. Just don’t look down.

HOW TO GET THERE A 8-12 hour round-hike from the remote village of Skjeggedal, itself around four hours drive from Oslo. 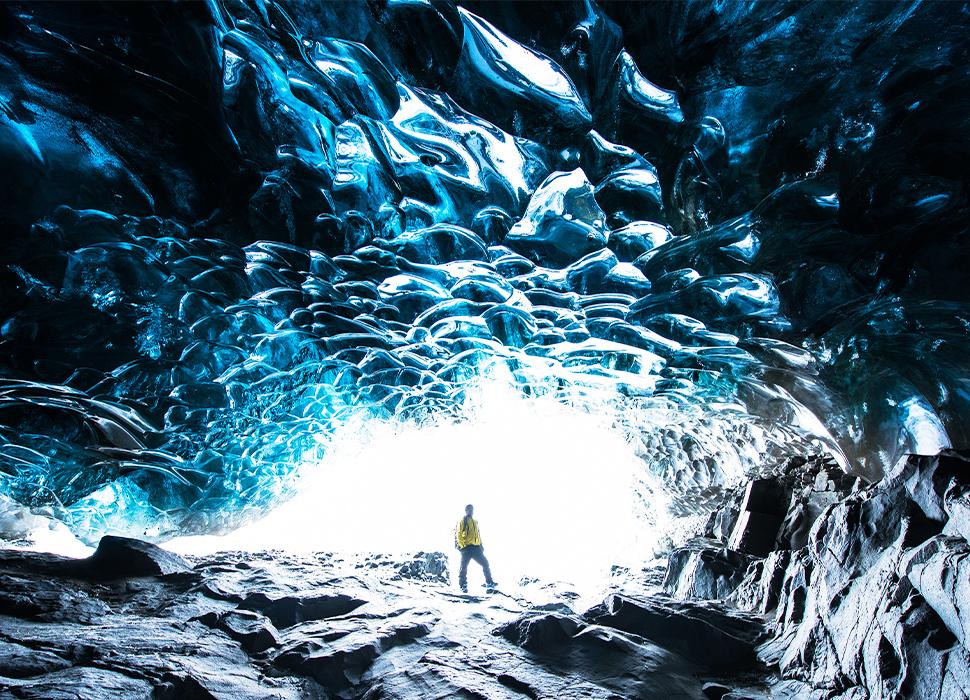 Like the most beautiful freezer you've ever seen / Photo: Adobe Stock

WHAT Sick of seeing a spectacular wonder of nature, just to find a million other people have the same Insta-snap? No such trauma with the mind-blowingly pretty ice caves beneath Vatnajökull, Iceland’s largest glacier. These jewel-like tunnels and chasms – rendered in astounding blue, the result of the ice being compressed into translucence – melt and refreeze as the seasons change, meaning guides frequently have to re-orient themselves around the changing cave systems.

HOW TO GET THERE Most winter tours set out from Jökulsárlón Glacier Lagoon, next to the famous Diamond Beach, although some depart from Reykjavik, around five hours’ drive west.