There’s no better way to cover (a lot of) gorgeous ground than with a riveting train ride, and Europe’s tracks are among the world’s finest. Steam ahead to these scenic rail routes for a rail-ly good time

“Come on baby, do the locomotion” is what you’ll be saying to your travelling companion, when you suggest a day out from the stazione (or the gare, the hauptbahnhof, or even the estação). Don’t worry – they won’t rail against the idea. Lots of lovely landscapes will whizz past your window. A selection of snacks will be consumed in the buffet car. Best of all, getting out of town by train allows you to discover end-of-the-line places you’d never otherwise think to include on your adventure. All you need to do is get on board with the idea.

Sure, trains are swell – but these are the most amazing travel experiences of 2022, full stop.

Nothing soothes the soul like a languid expanse of water. These are the dreamiest lakeside retreats in Europe. 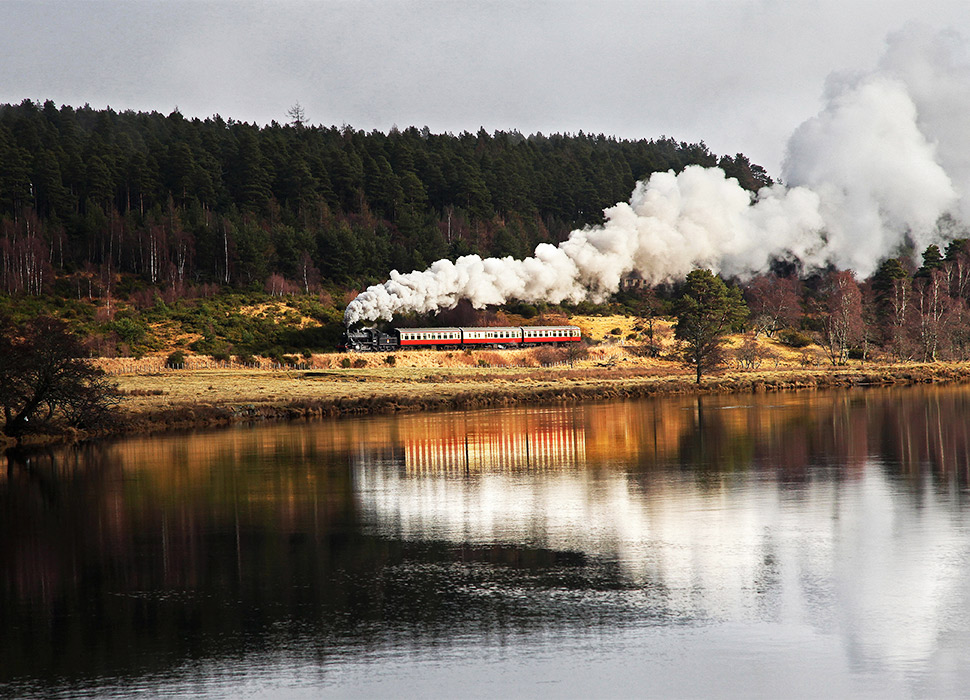 The Strathspey Railway at Croftnahaven, with the River Spey in the foreground / Credit: Alamy

Set out from the Scottish capital to the spire-filled city of Inverness, and in just three and a half hours, you’ll be treated to a jaunt on the ravishingly red Forth Bridge, a stop in twinkling-on-the-Tay Perth (officially Scotland’s happiest city), and a little wind through the Cairngorms – the largest National Park in the UK. If the snow falls as the train chugs higher into the Highlands, warm your hands in ice-white Blair Castle, or stop for a ski in Aviemore. Or, make like Thomas the Tank Engine on the steam-powered Strathspey Railway: squealing with childhood glee is encouraged. 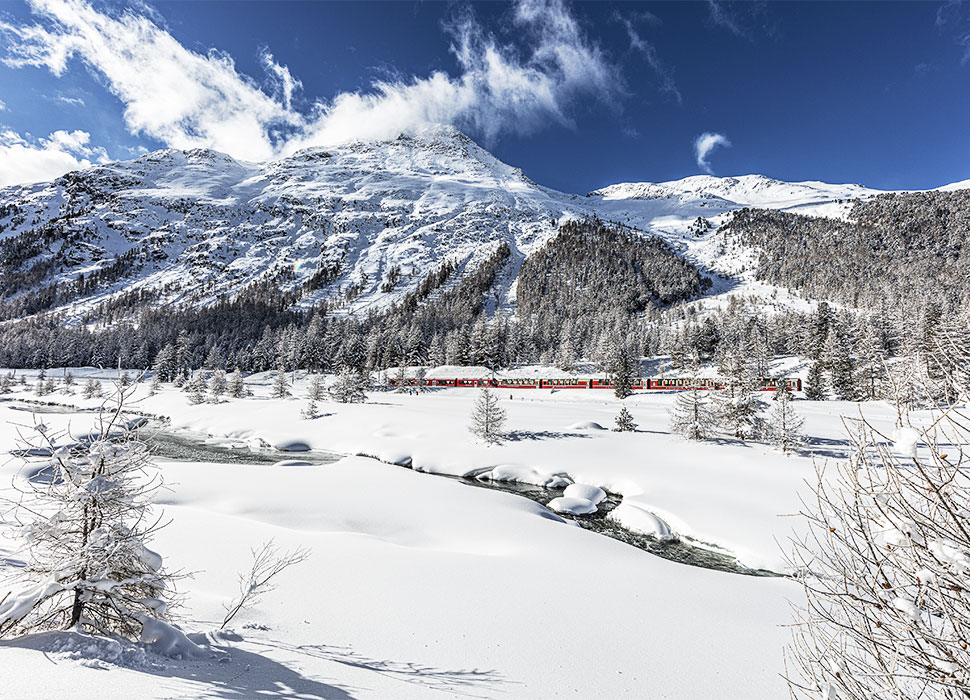 You’ve got two ways to travel between the Italian fashion capital and the Swiss chocolate capital. Trainspotters-in-waiting should take the direct Eurocity train, a journey of three hours and 20 minutes, which zips through the 35-mile-long Gotthard Base Tunnel – the world’s longest rail tunnel. Those who want the properly scenic route should change for the Bernina Express at Chur. You’ll soon see why the glass roof is necessary – the Alps rise overhead until you ascend to the moonscapey Bernina Pass (2,328 metres above sea level), and the Palü glacier juts out across the valley, before you literally descend into the streets of Italian lakeside town Tirano, bells a-ringing. 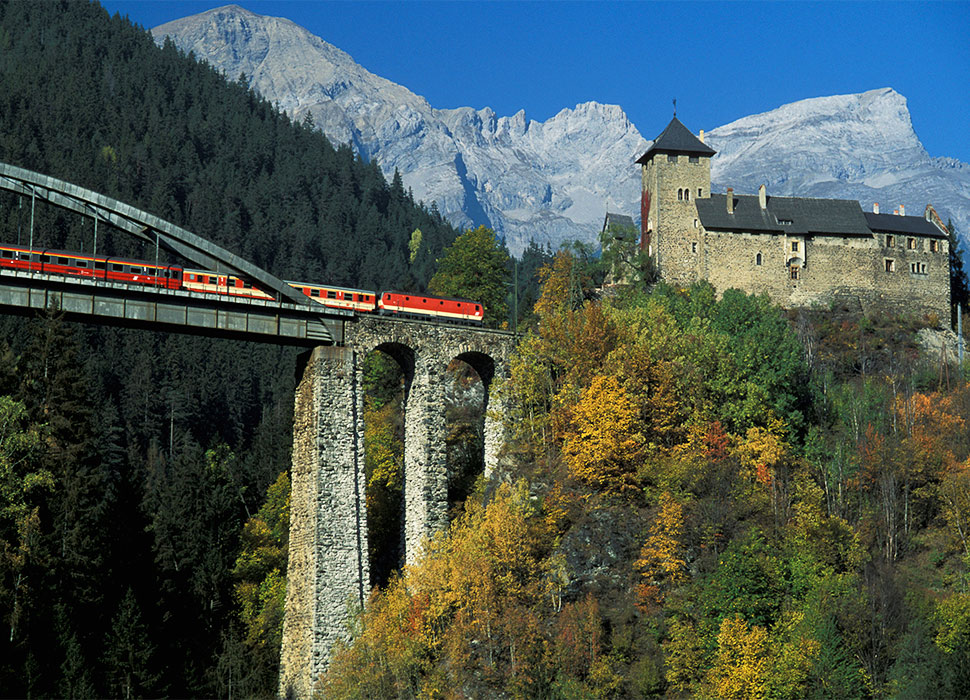 With its snaking green river, gilded rooftops and patchwork quilt of colourful townhouses, it’ll be hard to leave Innsbruck – but we promise the Arlberg Line to Bregenz (Lake Constance’s southern shore) is worth departing for. Just under an hour into your 2.5 hour trip, you’ll fly over the Trisanna Bridge, a late-19th-century marvel of engineering overlooked by the equally imposing 13th-century Wiesburg Castle. You’re in Tyrol now, and there’s no turning back, but you’re welcome to stop for an après-ski in St Anton am Arlberg. Thanks to a new-ish network of cable cars and lifts, it’s become one of the world’s largest ski areas. Sweaty? Cool off in Constance. 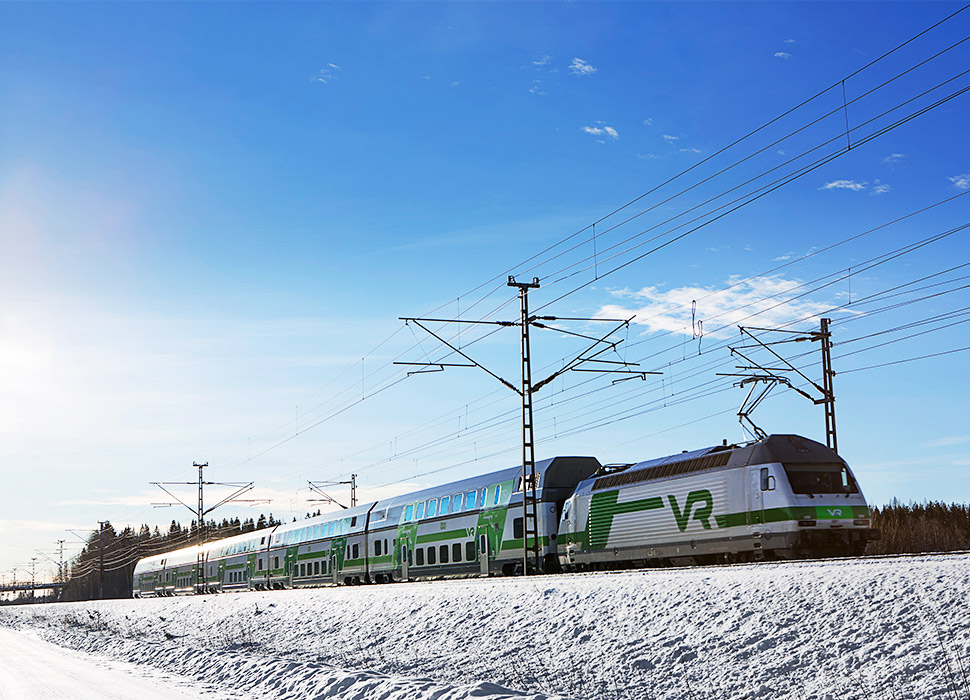 Want to make like Santa Claus, but don’t fancy the flight? Take the overnight “Santa Claus Express'' from the Finnish capital to the heart of Lapland. When you board, you won’t miss your train (physically or metaphorically), as Santa himself is brandished on the side. From Helsinki, it’s a 12-hour journey through marshes, sub-Arctic beaches, and thick pine forests. If you go in summertime, you’ll see every minute of it in daylight. There are benefits to going in winter, too: the Northern Lights might make an appearance, which you’ll enjoy from a comfy lime green couchette. Or from the year-round Santa Claus village when you get to Rovaniemi. We just love Christmas, okay? 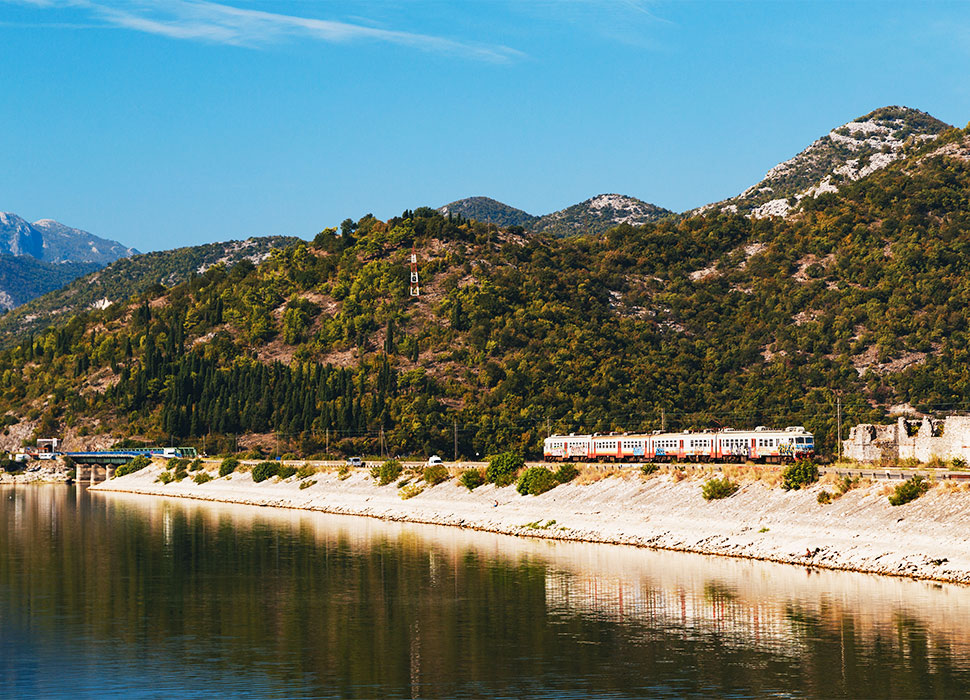 Another long-hauler, the 11-hour Belgrade to Bar railway is the ultimate Balkan experience. Sure, there are deserted lakes and Dinaric Alps aplenty, but President Tito’s 300-mile passion project offers so much more. Look out for the tiny and turreted Kumanika monastery next to the tracks at Vrbnica, or feel your breath get taken away at the Mala Rijeka viaduct which, at almost 200 metres high, was once the loftiest railway bridge in the world. You’ll be able to fill your lungs again with fresh Adriatic air, once you disembark in the Montenegrin beach resort of Bar. 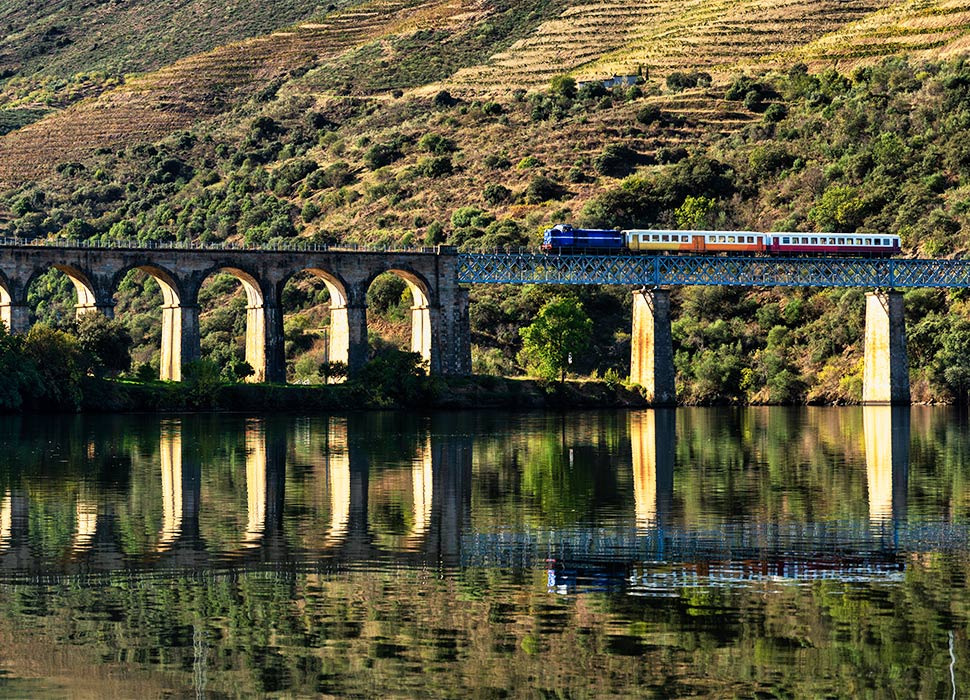 Wine lovers certainly won’t be, er, whining on the Linha do Douro, which traverses prime port territory. Once the railway meets up with the river, it clings for dear life to its banks – just like the steep vineyard terraces you’ll see all over the Alto Douro. Break your journey in Pinhão, admire the 24 azulejos (blue and white tiles) on the way out of the station, and board a blissful river cruise to switch up your modes of transport. If you hop straight back on a return train from the end of the line, you’ll be back to Porto in time for dinner. 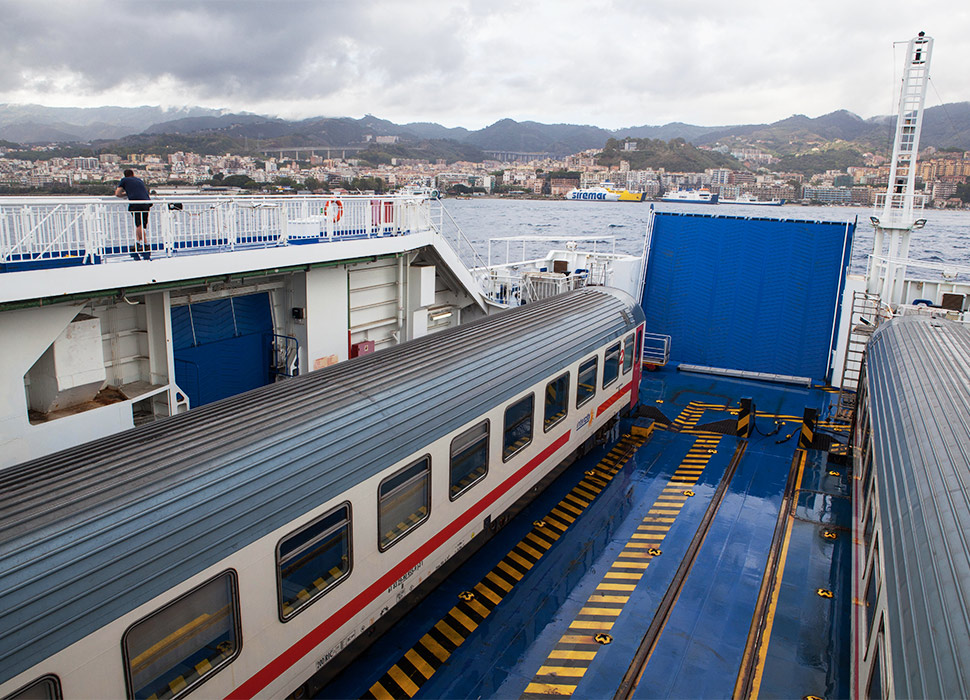 Train on the Straits of Messina on one of the world’s only train ferries, Credit Alamy

We know it’s a 12-hour train. But the gemstone-like seas of the Amalfi Coast beneath your window, plus the opportunity to set sail across the Straits of Messina on one of the world’s only train ferries, will stave off any boredom. Oddly-shaped mountains turn coasting through the instep of Italy a fun game – does that one look more like a hand, or a rabbit, to you? When your carriage safely rolls into the train ferry at Villa San Giovanni, you’ve got half an hour to take in the Tyrrhenian and grab a cannoli in the café, before you make landfall at Sicily. From there, it’s full steam ahead past ancient Syracuse to pretty Palermo.

The Little Train of Pelion, Greece 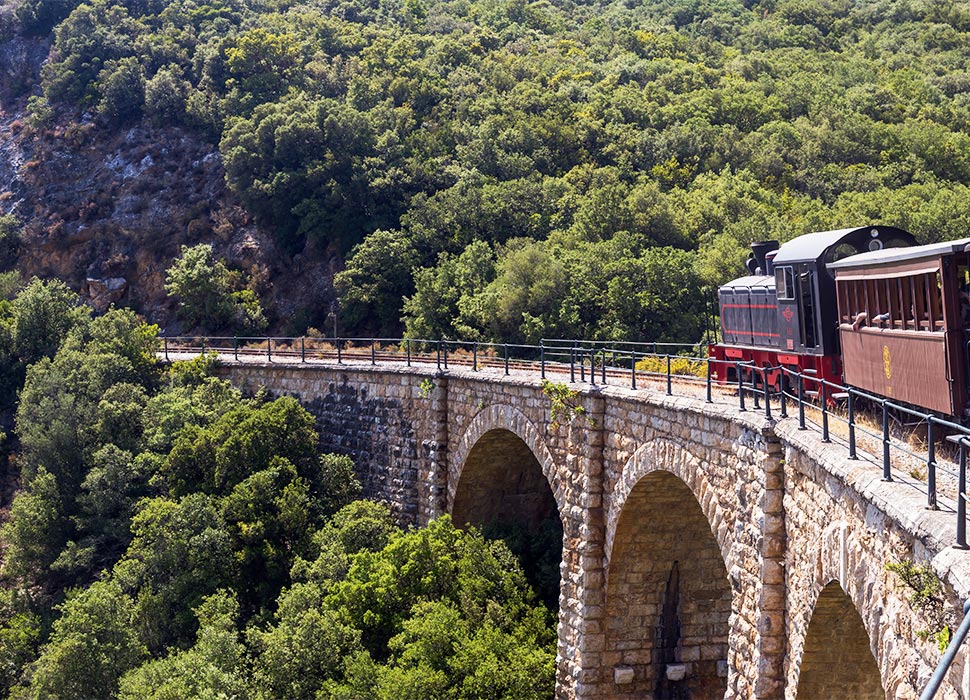 Pop across the Med to Volos and meet Greece’s plucky narrow-gauge nipper. The “Little Train of Pelion” – or, “Mountzoris” (meaning 'muddy') as it’s affectionately known in Greek – has tracks measuring just 60cm across, but it’s been lugging four iron carriages up to the village of Milies since 1896. Surrealist artist Giorgio de Chirico was present during the line’s construction, as his father was the railway’s mastermind, and the young boy is said to have developed a lifelong fascination with trains. But Pelion’s plane trees are the real artist’s muse; come in golden Autumn to experience the only time you’ll be glad to see leaves on the line.

Choose from a good old fashioned steam train or a childlike red-and-yellow loco on this cute route between Nice and Digne-les-Bains. Legend has it that the train used to run at such snail's pace that passengers could pick up pinecones from the sidings as they went. Thankfully, the train’s picked up speed in the years since, and takes travellers from the Med to the montagnes. Leave your beach clothes behind and pack your hiking boots, as the Train des Pignes has plenty of places to get out and walk – choose to meander through lavender fields, fortified Medieval villages built into cliffs, or endless olive groves in the Var Valley. 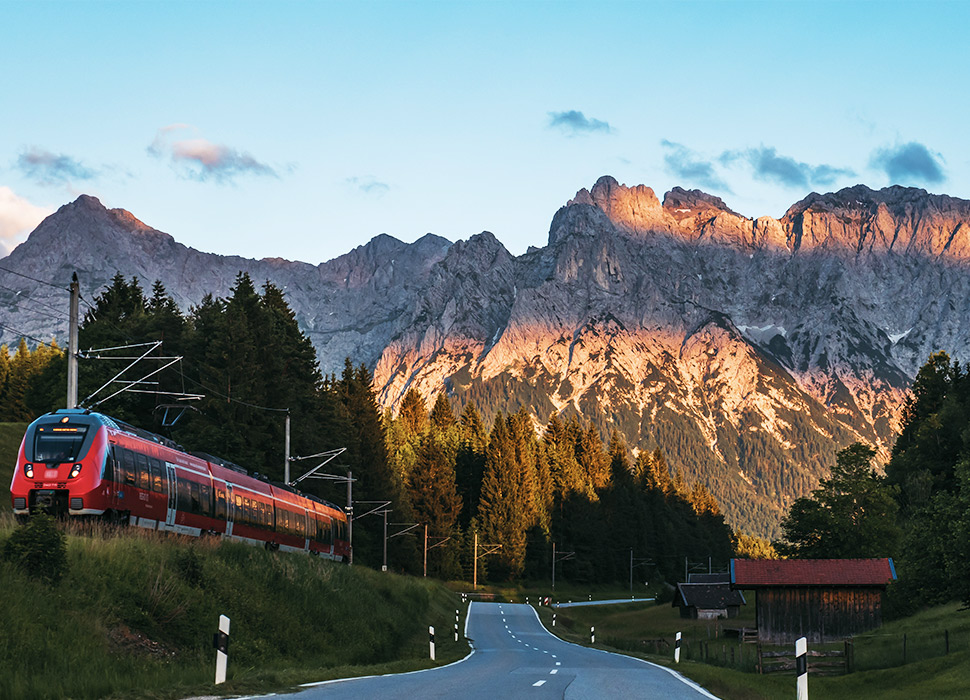 Depart the bustling Bavarian capital for pastures green on this service to Mittenwald. In 90 short minutes, you’ll see sprawling farmland give way to glassy lakes, and eventually, formidable grey foothills. Get your ice skates on at Garmisch’s Olympic rink, before continuing to the end of the line. Mittenwald is arguably the most musical town in the Alps, as it’s the stomping ground of the Klotz family, who began crafting virtuoso violins here in 1684. Can’t resist a little cross-border trip? Change for Innsbruck on the equally eye-catching Karwendelbahn, or simply walk over the Leutaschklamm waterfall into Austrian territory.