Everyone loves to hit the beach, but no one wants to turn up and find crowds with the same idea. Rest easy, as we’ve trawled the map to find the coolest coasts only the locals know about

Seaside getaways don’t have to be all sun loungers and souvenirs, y'know (but hey, they’re a good place to start). For a truly off-the-beaten-beach experience, seek out these thrilling, adventurous and hard-to-reach shores – that moment you dip your toes into the water will feel even more serene. Once you’ve seen them for yourself, it’ll be a challenge keeping these castaway coves a secret for too long...

Sand on the brain? Then make your way to one of the most beautiful beaches in Europe.

Sun, sea and... stone stacking? These are the nine best things you can do on a beach (that aren't that). 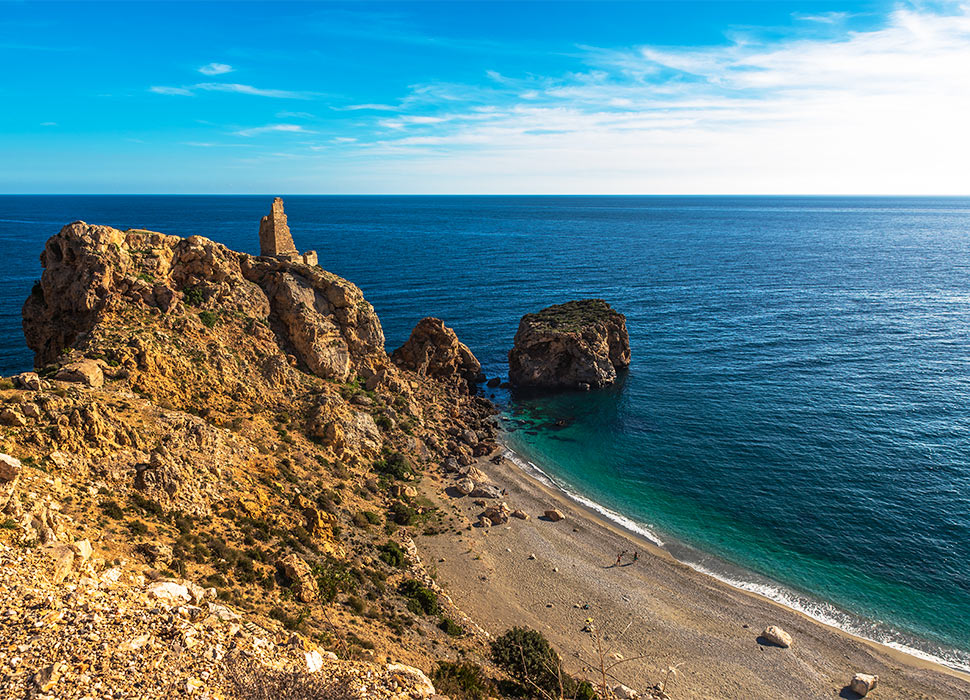 The Costa Tropical is one of Spain’s more covert costas. Turning off the coast road just after Calahonda and strolling through segments of the craggy Barranco Zacatín will land you in Playa de la Rijana (pronounced 'Rihanna' – like her, you should probably bring an umbrella, as the sole shade here is under the succulents). This hidden nature reserve is a popular place for Spanish day-trippers; the dark shingle gives way to remarkably clear waters, inhabited by shoals of black fish, which part dramatically as you swim through. Best explored with a trusty pair of goggles, or a kayak rented from the surf shack. 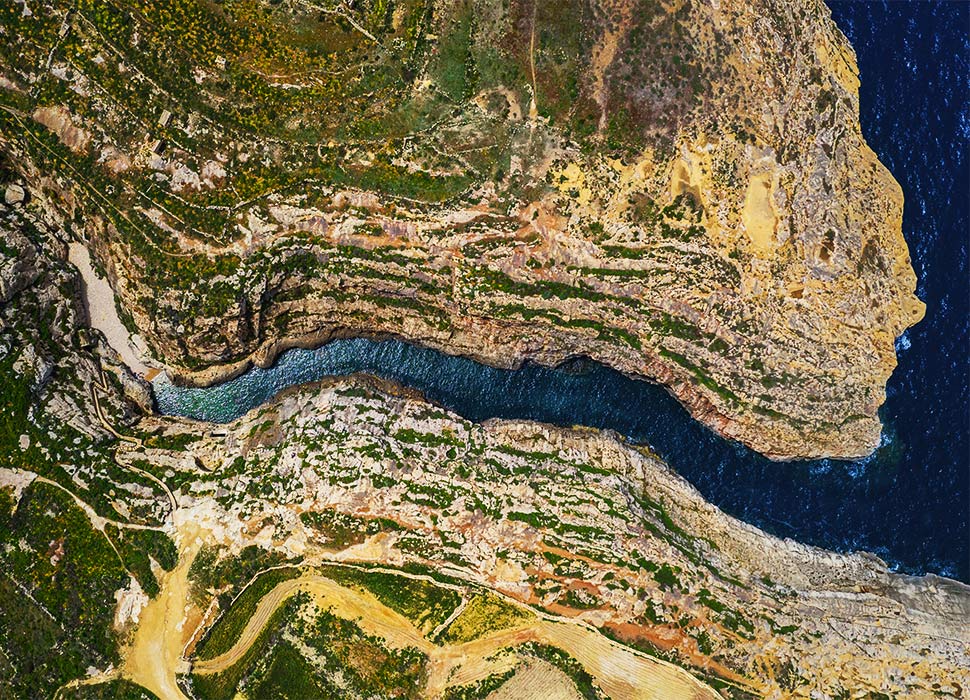 This Gozitan gorge is one of the dreamiest spots in the Maltese archipelago / Image: Adobe Stock

After picking your way past the overgrown prickly pears and hardy wildflowers lining the 2.5km path from Żebbuġ village, a Gozitan gem reveals itself. Sheer cliffs funnel the choppy Med into the Ghasri valley, where they're calmed and turned a chalky shade of aquamarine. If there’s no wind, you can see to the bottom, where sea creatures live in the crevices between fallen limestone boulders. Don’t want to get out of your depth? No problem. Some rocks reach so close to the surface that you can sit on them and enjoy a semi-submerged chat with your travel companions. 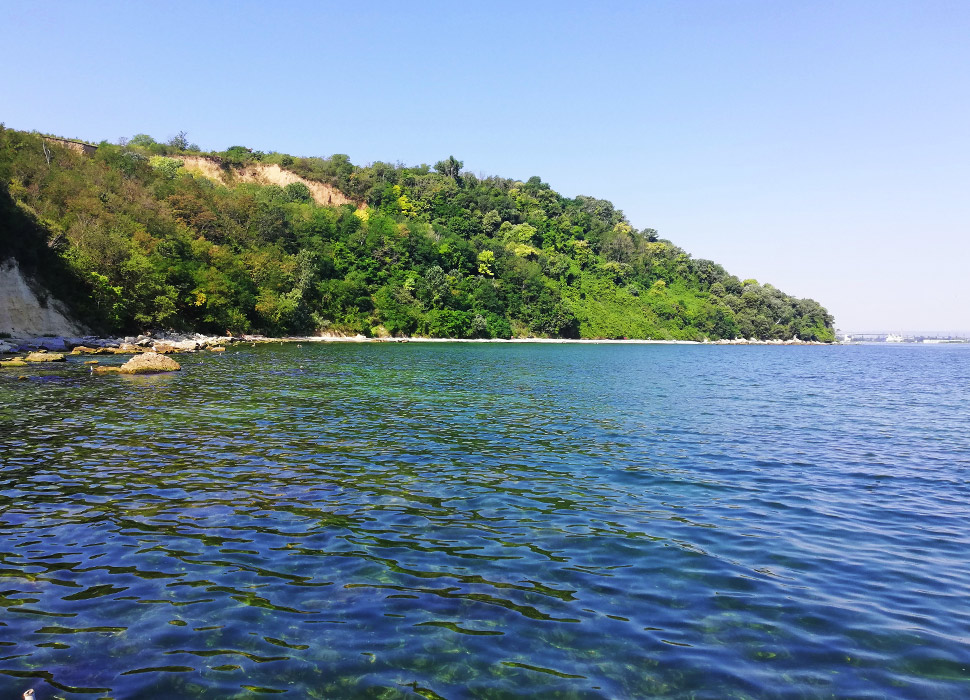 Behold this forest-backed beach, one of the sweetest on the Black Sea / Image: VISIT Varna

South of seafront Varna is ‘Romantika’ beach: a quiet 500m stretch where Bulgaria's Gulf of Varna meets the Black Sea. Except the water here isn’t black, it’s more a crystal jade colour. To find it, park at the Cape Galata lighthouse, and take the steps through a verdant deciduous forest to the beach. You'll need to lug all your gear down, as there aren’t any facilities, but such is the price of pristine peace. Alternatively, charter a speedboat from Varna and soak up the atmosphere on the return journey, as you watch the city turn on its twinkling lights. 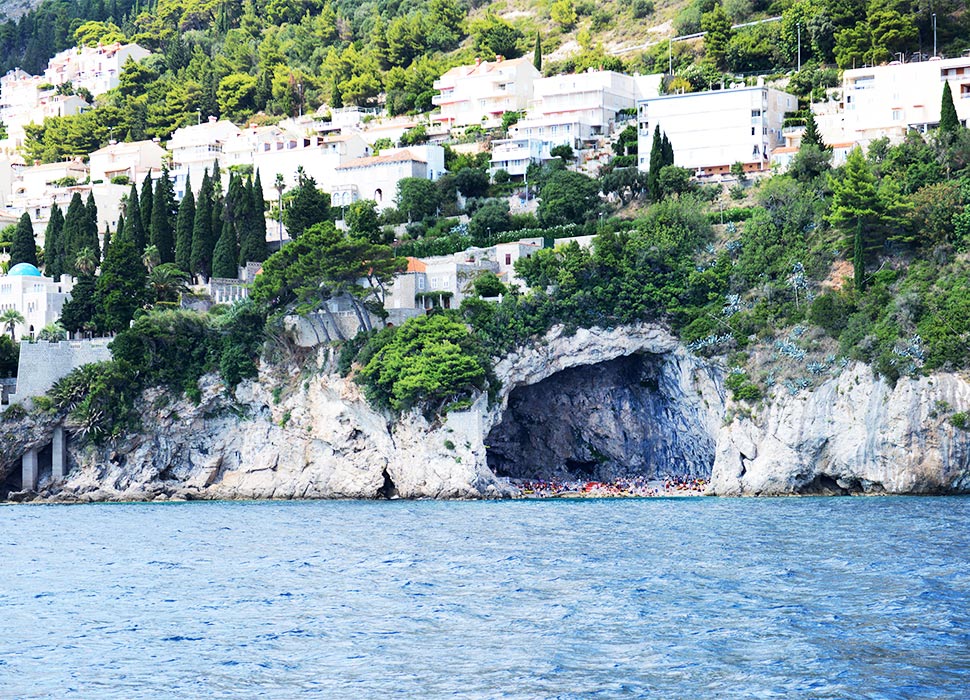 Make like Dubrovnik's locals and hole up in this giant, er, hole / Image: Alamy

Access to the cathedralesque cave at Betina Spilja is tricky; your best bet is arriving via paddle power. There’s a small shale beach, said to be cooler than an air-conditioned room, because its natural roof and southeast orientation force the sun’s rays to take a siesta – so no wonder Dubrovnik’s boiling beachgoers come in the height of summer to cool off. Despite that, the beach’s namesake, medieval scientist Marin ‘Bete’ Getaldic, used its unique positioning to conduct solar experiments. Some say that his use of mirrors set passing boats on fire. Maybe stay in the cave, yeah? 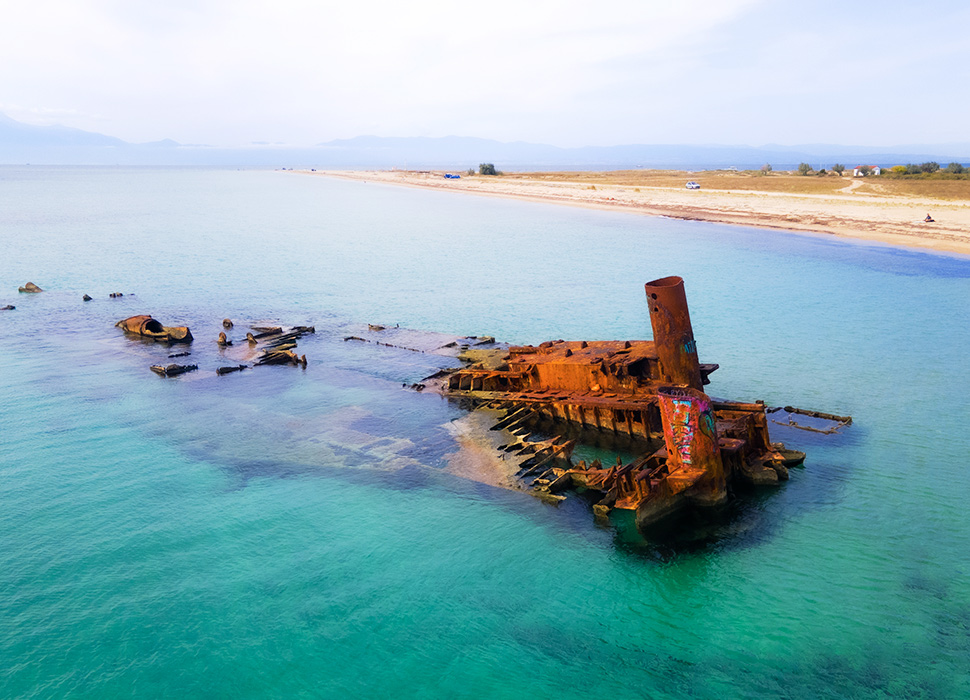 Fancy snorkelling around a shipwreck? Then head to Epanomi, an isosceles-triangle-shaped (we are in Greece, after all) spit of bone-white sand and grassy dunes near Thessaloniki. The stricken vessel in question lies just a few metres offshore, so you can wade out to its eerie exoskeleton, which has been languishing in the balmy Thermaic Gulf since the 1970s. Its decks are still littered with shipping paraphernalia, but it’s captained by crusty barnacles these days. The Blue Flag beach facilities are very Spartan – ie, there are none – but you'll find a couple of brilliant beach bars around a kilometre away. 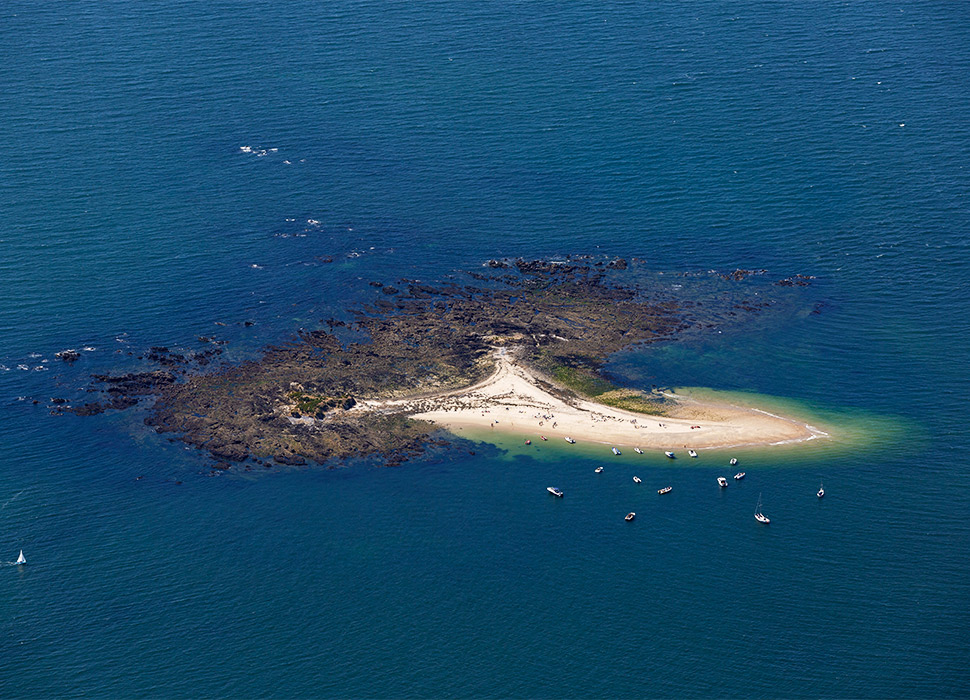 This island may be way out to sea, but it's not skerry hard to get to / Image: Adobe Stock

Blink and you’ll miss this Breton jewel. A reef island 4km adrift of the port of La Baule, Île des Évens is a hermit’s haven. Few tourists discover its pillowy grains and maze of sealife-filled rockpools: you’ll likely be sharing the sand with a handful of French families and their vibrantly sailed yachts, so bring some local delicacies (the cidre is scrump-tious) to share and spark conversation. The only time it ever gets close to busy is during the annual open swimming challenge in July, which sees wetsuit-clad swimmers crawl their way from the Île to the mainland. Otherwise, the boatless should seek out the kayak, speedboat, yacht and jet-ski rental services in Le Pouliguen and La Baule. 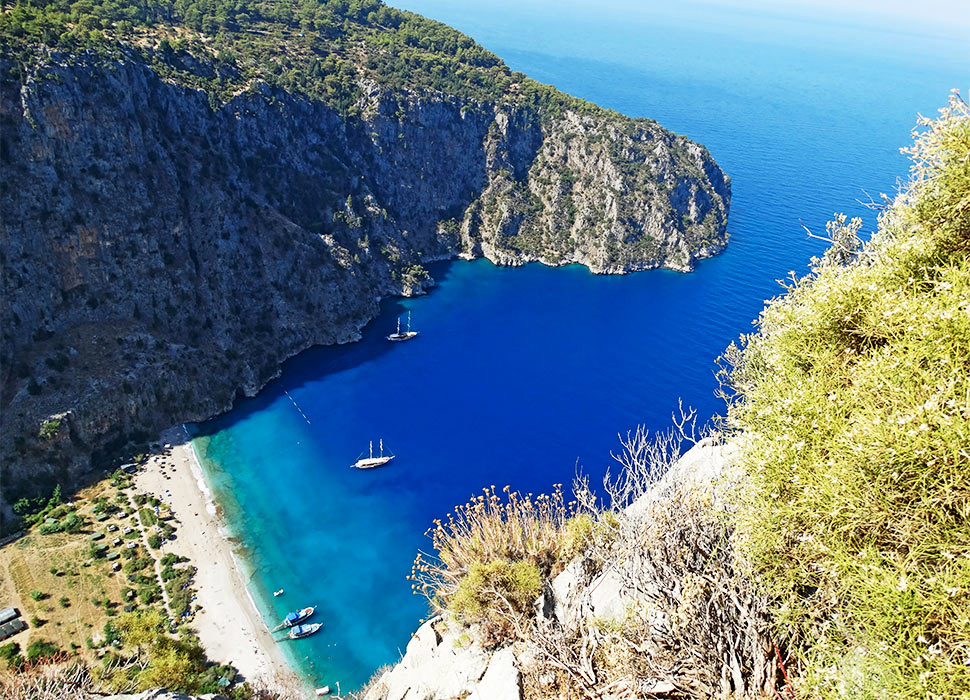 A beach so beautiful you're bound to get in a flap / Image: 123rf

Imagine paradise: if you’re thinking palm jungles, desert-island beaches and the faint twittering of wildlife, make a beeline for Turkey's Butterfly Valley. This coastal canyon is home to 80 species of the titular Lepidoptera, including the fiery Jersey Tiger. The beach is only accessible by boat, but stay after the last water taxi leaves, because that's when the valley comes out of its cocoon. Book one of the homely beach bungalows to experience an after-dark hippie culture of acoustic music, night yoga and a cooperative fish restaurant where washing your own dishes is encouraged. Your plates will be licked clean anyway. 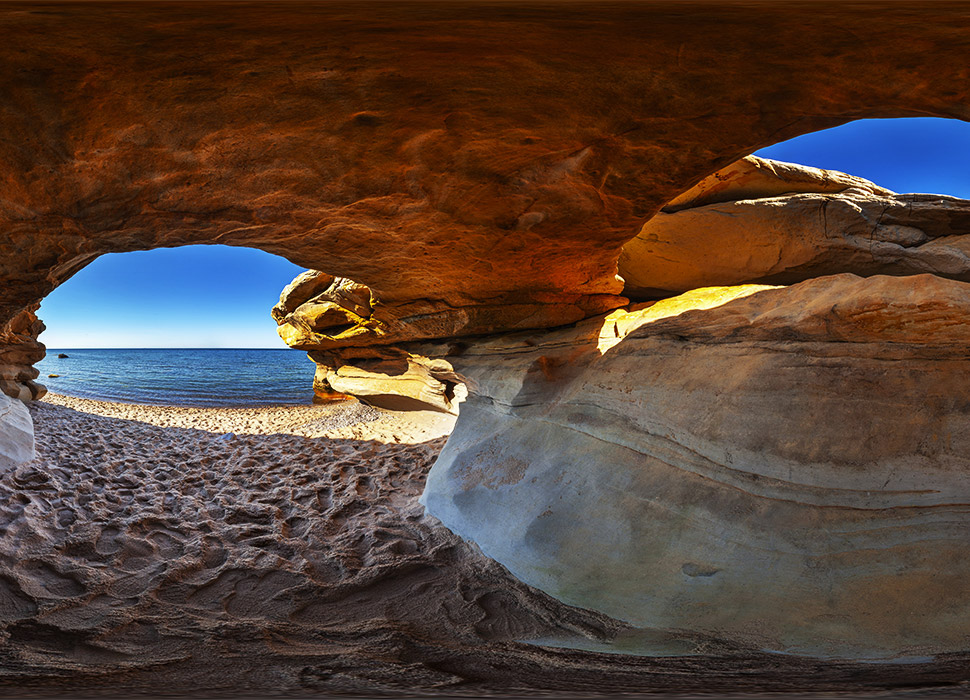 The natural alcoves on this Baltic beach are particularly photogenic / Image: Adobe Stock

You’ve seen Portugal’s cavernous Benagil beach – now, meet its Baltic equivalent. The coastline around Suurupi in Estonia has plenty of nooks and crannies, but this C-shaped alcove next to the Tsarist-era lighthouse is particularly photogenic. Once you’ve clambered down a shallow cliff, you can perch inside a tiny cave, staring up into the peephole. However, there’s not a lot of room to spread out: if you need towel space, hike a few kilometres further along the wooded Suurupi Trail. Passing abandoned Soviet sea defences, you’ll come to the larger ‘Secret Beach’ (yes, that’s what it’s called), complete with mini-waterfall. 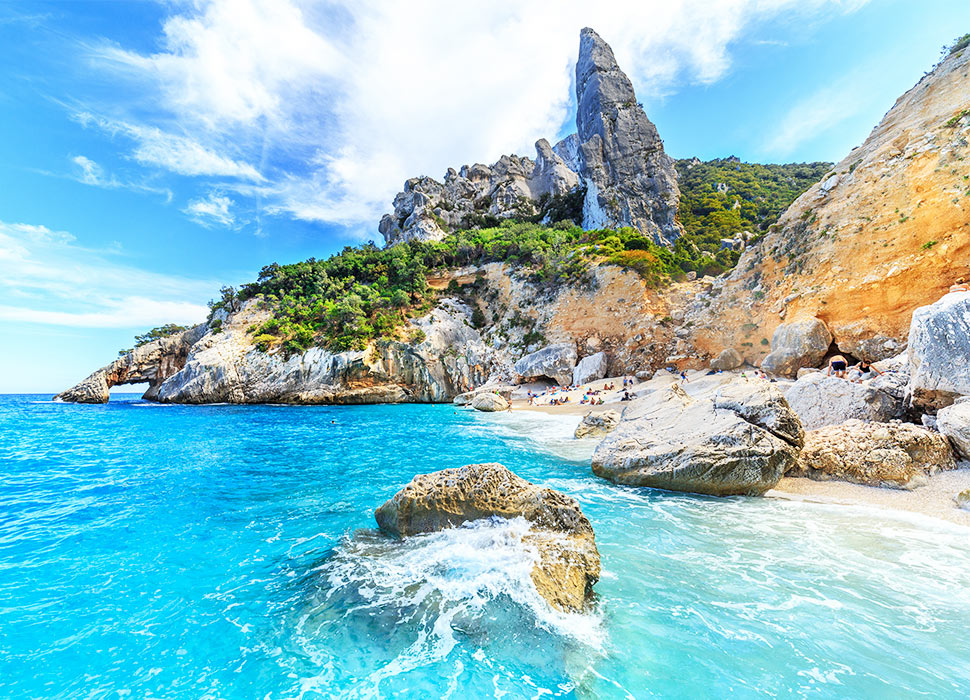 Brazil, is that you? With its sugarloaf-like spire and rippling turquoise seas, Cala Goloritze might look like a slice of the tropics, but this pebble beach is actually one of Sardinia’s finest. Overlooked by the 143m Monte Caroddi – a vantage point from which falcons keep their beady eyes on visitors – Goloritze is a geologist’s dream, resplendent with weird and wonderful rock formations. Besides the karst, you’ll find neatly stacked boulders, and even a mini Durdle Door to swim through. The beach is a national monument, so there’s a €6 fee to enter. 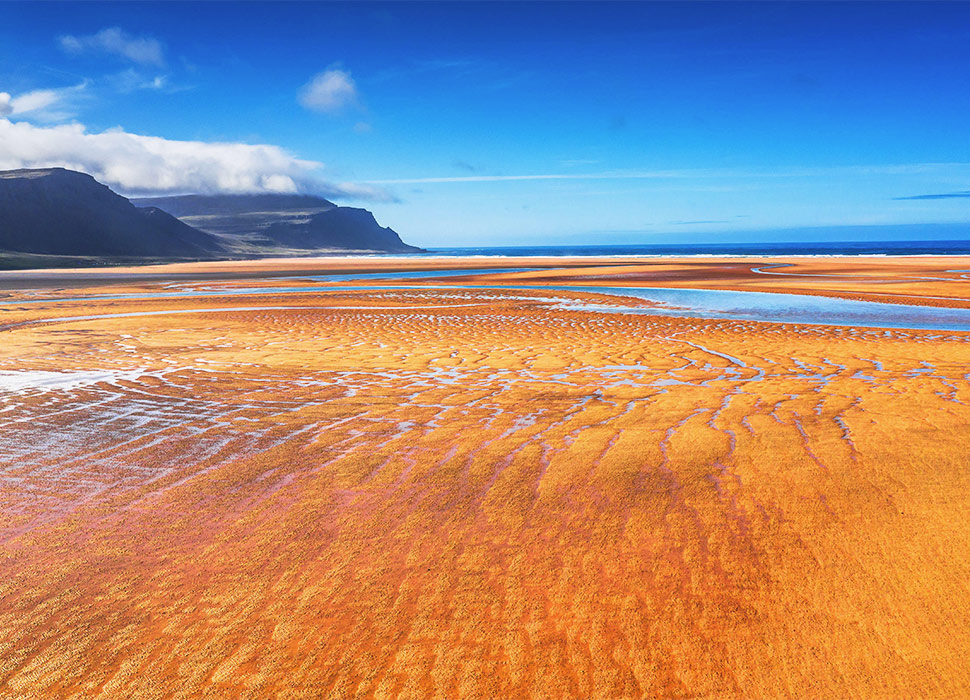 When it comes to beaches, Iceland’s are typically as black as a winter sky. But Rauðasandur – way out in the remote Westfjords – bucks that trend, and its vast, terracotta-coloured expanse is constantly changing hue. The beach represents the full primary colour wheel: the chilly sapphire stream (which you’ll need to ford on foot, so pack your wellies) cuts through yellow sand, which goes red if it’s overcast. Green might even enter the mix, if the elusive northern lights decide to make an appearance. Watch out for flashes of black, white and orange, too – that’ll be from the resident puffins bathing in the Atlantic. 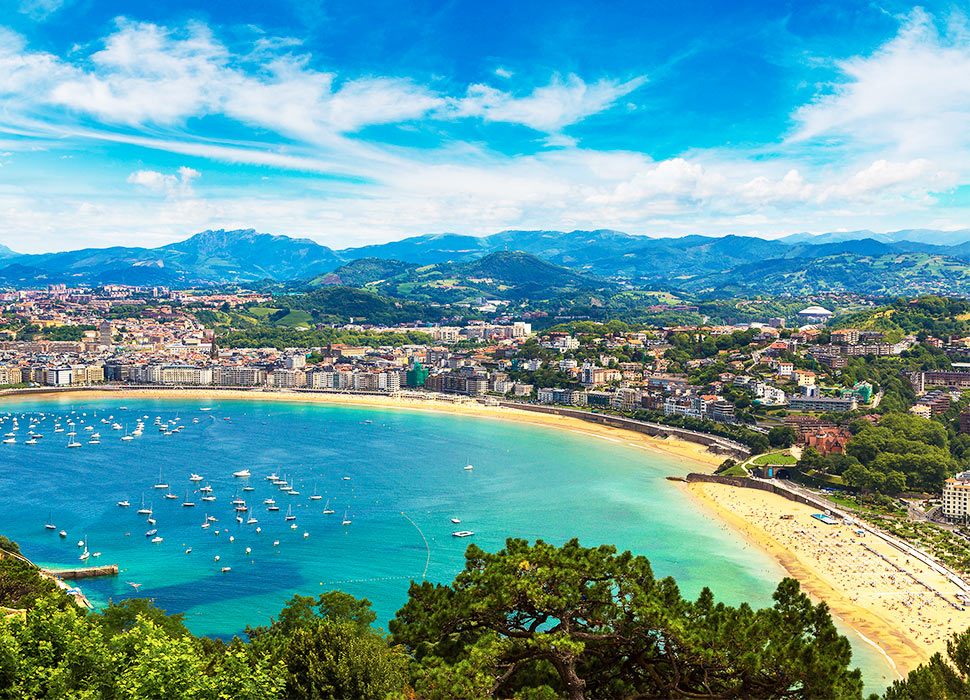 This Basque classic is named for its crescent-shaped bay / Image: Adobe Stock

San Sebastián: the place to pinch your weight in pintxos, and the destination for the proudly gluttonous traveller who believes a holiday should be at least 75 percent food and wine. During the other 25 percent, however, take yourself down to La Concha – so named for its perfectly regular, crescent-shaped bay. It may be an urban beach, located slap bang in the city centre, but don’t let that put you off; gaze upon its crystal clear waters and golden sands, and the hustle and bustle of life will soon melt away. Take the funicular railway up Monte Igeldo for superior views over the bay, plus a bonus vintage fairground at the top of the railway’s peak.

Fly to: Biarritz or Bilbao 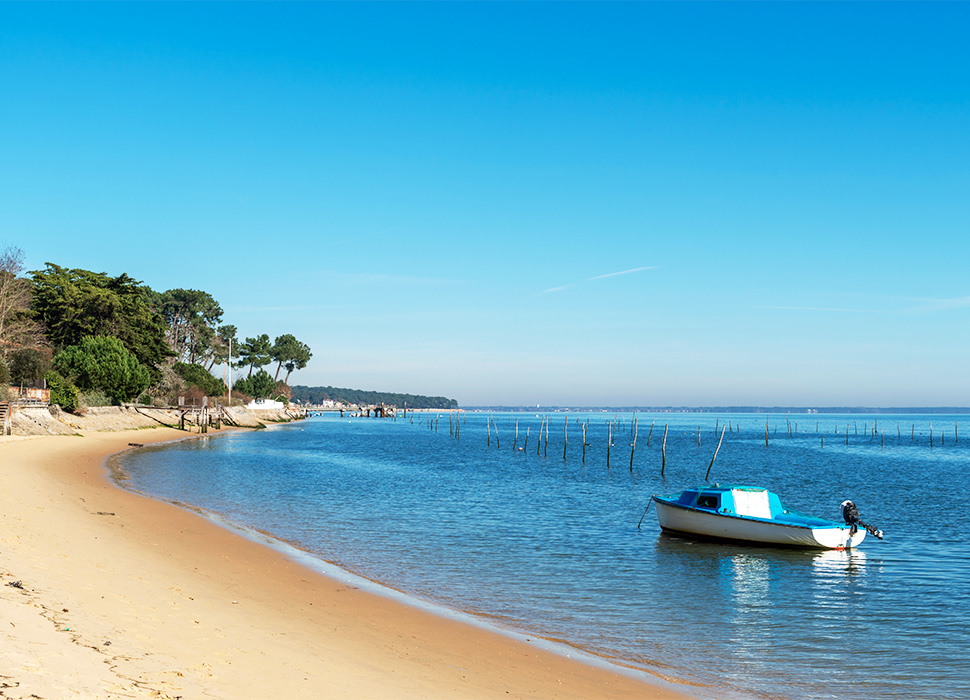 Lined by wooden cabins, the unassuming beach attached to the small fishing village of Herbe, in France's southwesterly Gironde department, might not be the flashiest destination in this list, but what it lacks in grandeur it makes up for in true, local style. Home to a cluster of working oyster farms, Herbe is one of several villages along the Arcachon Bay dedicated to the delicious molluscs; spend the day exploring the coast, and then pitch up to a local restaurant for a few on the half shell, with a glass of the good stuff. If you'd rather not stray far from the sand, Emile et Une Huître is the only beach-side oyster spot you need to know. 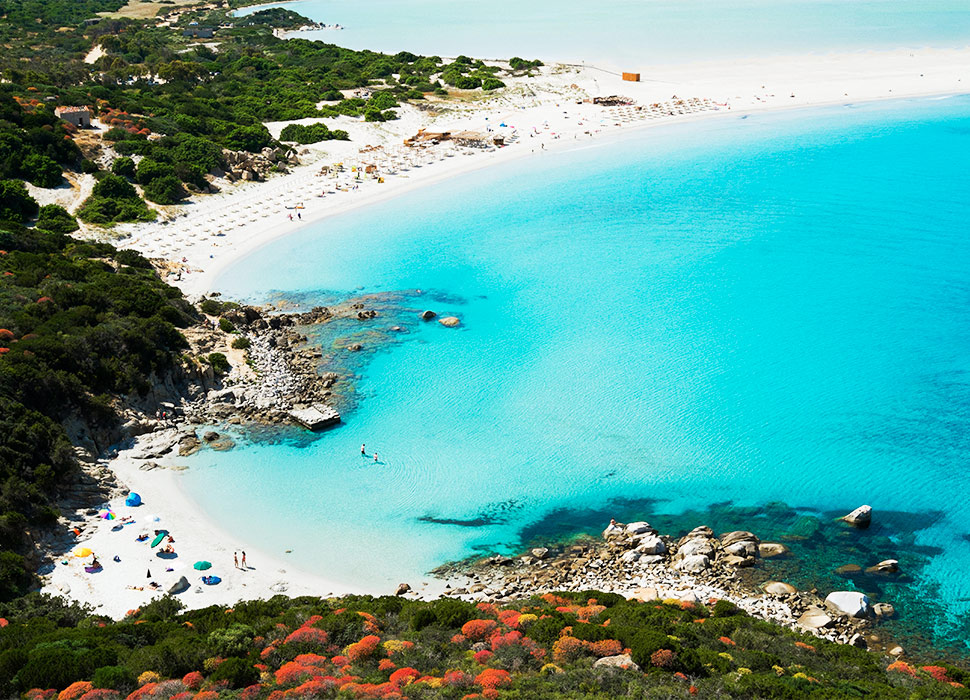 With its pink-tinged sand and an in-house flock of pink flamingos, southeast Sardinia’s Porto Giunco is surely only summers away from earning its badge as an Instagram destination of choice. Beat the influencers to it, however, and bask in the Mediterranean climate, juniper-covered dunes and glimmering pale blue waters full of fish – perfect for a memorable diving expedition, should the mood take you. Bars with sunbeds are available, or just grab a spot on the sand and save your Euros. Or climb the tower of Porto Giunco on the South-West side of the beach for a slice of history (the building dates back to the 17th Century) and sweeping views. 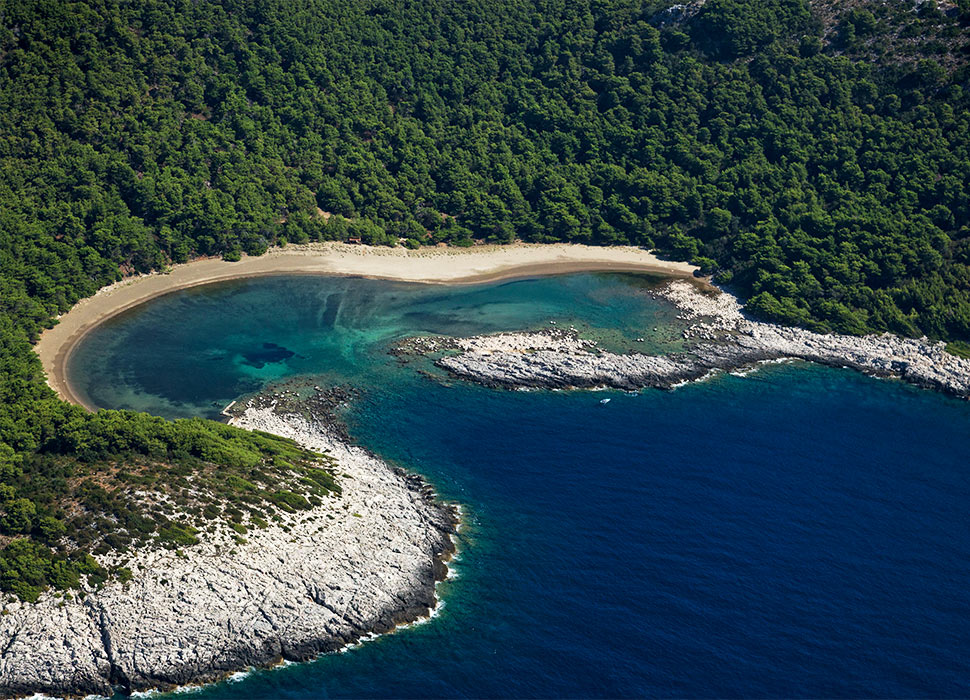 Mjlet’s best beach tales something of a trek to reach / Image: Alamy

Saplunara might be the more well-known of Mjlet’s beaches, but the picturesque Croatian island also has another trick up its sleeve in the form of Bláce - a chilled, sandy place of respite, less than half hour away from its beachy big sister. Reachable only by a dirt road, there’s something of the desert island oasis to Bláce, but with great anonymity comes an equal lack of infrastructure. Basically, if you want lunch, you’d best pack it yourself. 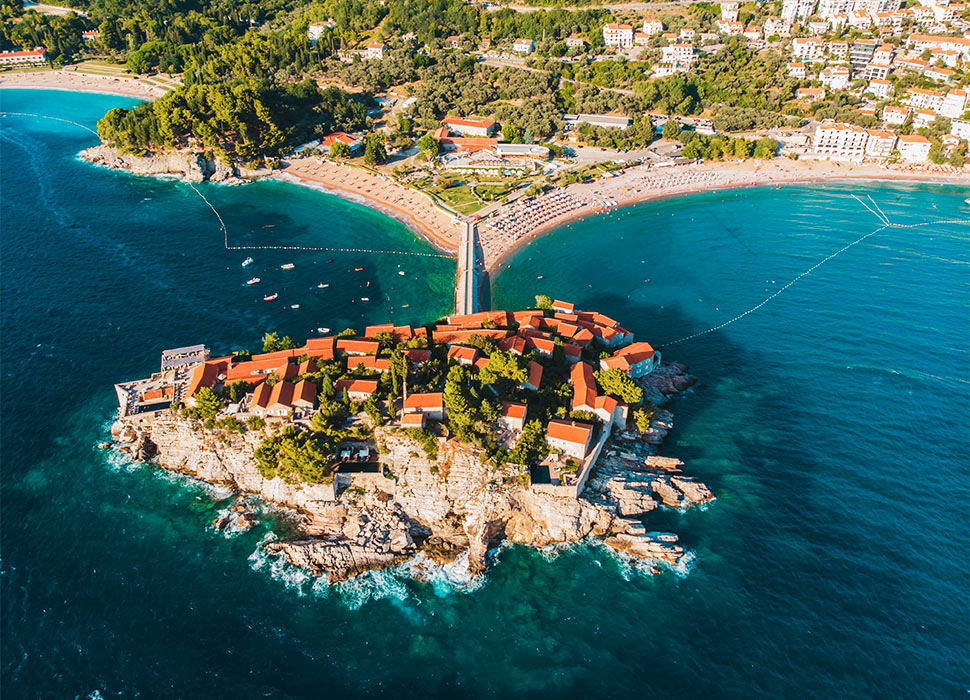 Blow your budget on a bed, then recoup your expenses with a day on the sands

A tiny former fishing island turned luxury resort, Sveti Stefan lands on the more eye-watering end of beach options with a stay in the main hotel costing upwards of $850 a night. Fear not, however, for you can still access the beaches on the left of the promenade for free if you’re merely day-tripping – and let’s be honest, the water’s going to be the same whether you’re forking out a month’s rent to be there or not.