Europe's LGBTQI+ scene is anything but generic: there are hidden gems and time-honoured institutions in every city. Here's some of the continent's best queer-themed destinations and experiences

Or this one, on the coolest LGBTQ+ nightlife in Europe? 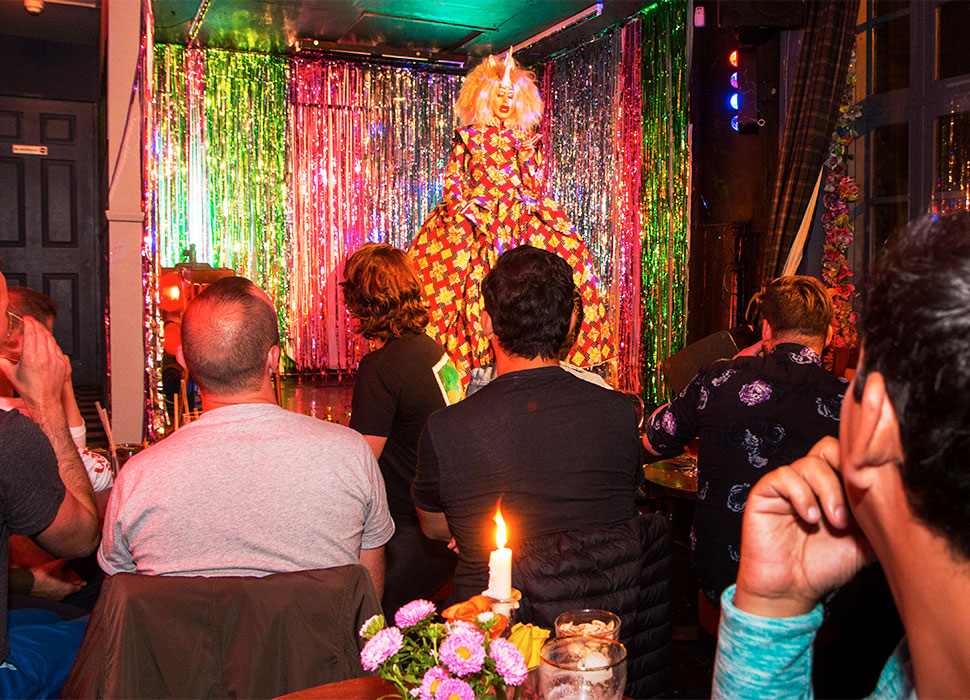 Though it only opened eight years ago, The Glory already feels like an East London institution. That's partly because it supports the city's queer performance scene with regular drag competitions and off-the-wall theme nights like Björk Scratchings, a zany celebration of the Icelandic singer. But it's also because it's just a really nice spot for a post-work pint or Friday night dance. In fact, the overall vibe is so convivial that The Glory is often called "the gay Cheers". 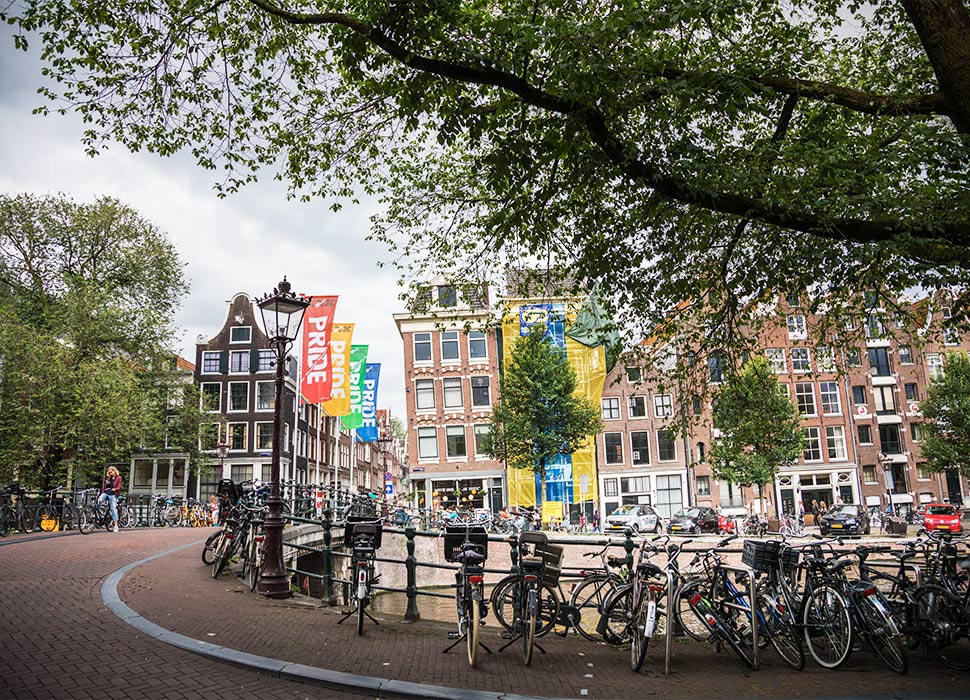 Amsterdam has a thriving and varied LGBTQ+ scene, so it's no surprise that it goes big on Pride. Held every year on the first weekend in August, it offers a packed programme of street parties, club nights and general bonhomie with an inclusive agenda: this year's theme is 'My Gender, My Pride'. The undoubted highlight is the stunning Canal Parade, in which the city's iconic waterways host a flotilla of glitter-decked and rainbow-coloured boats. 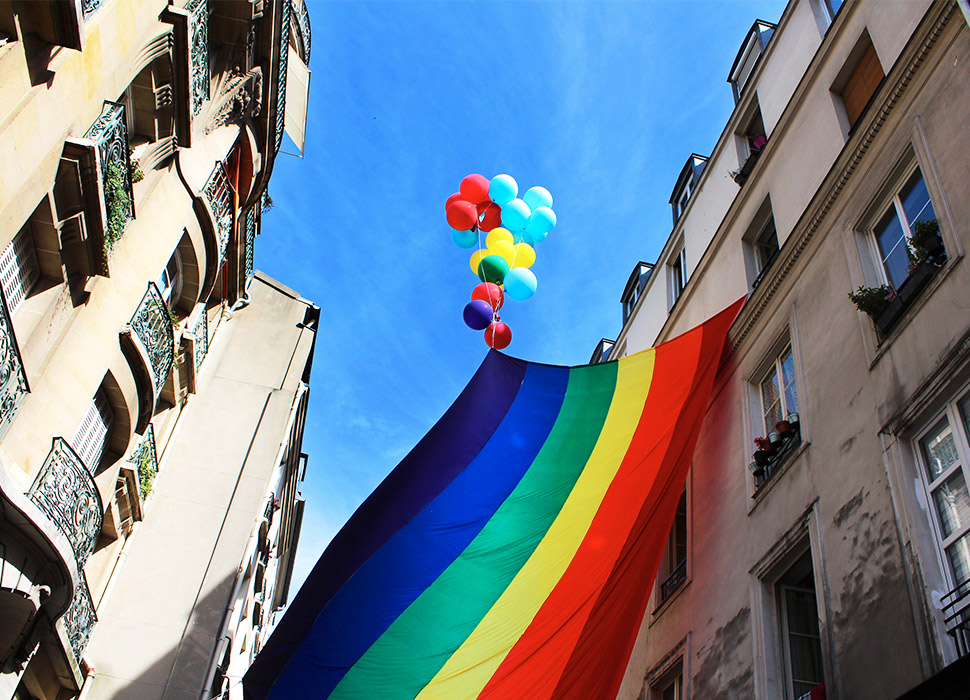 Spread over parts of the 3rd and 4th arrondissements, Le Marais is a chic and bohemian district that’s been a hub for Paris's LGBTQ+ community since the 1980s. Its cute cobblestone streets are home to loads of quirky boutiques and chi-chi bistros as well as the Picasso Museum. Once you’re done people-watching – a favoured Marais pastime – head to trendy gay drinking hole Les Souffleurs, the outdoor terrace of Cox bar, and Lucky Records, a music shop that specialises in pop divas like Madonna and Lady Gaga. 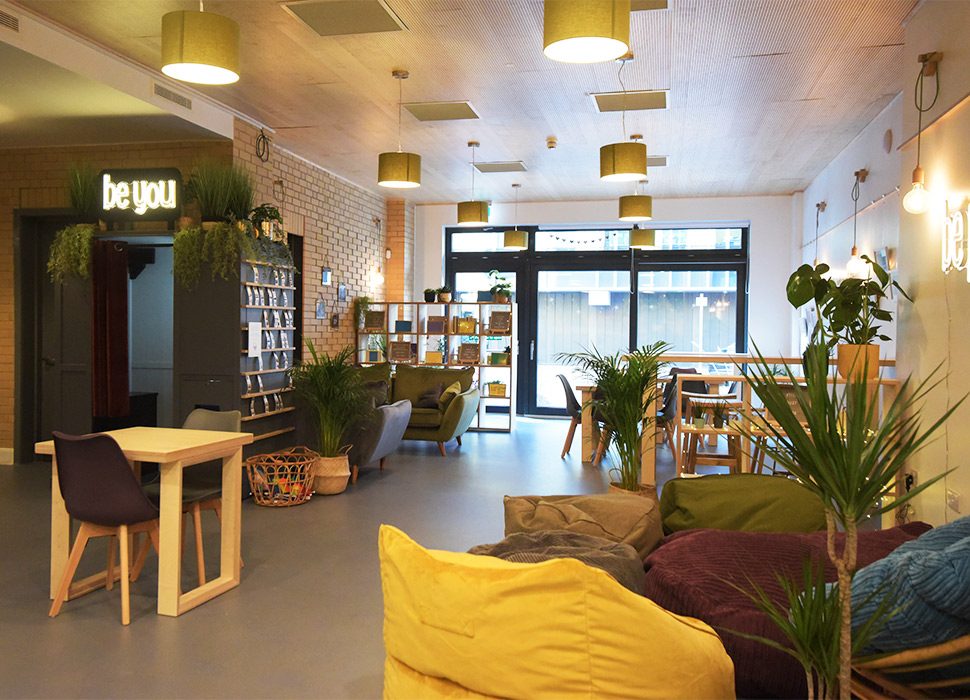 Opened earlier this year, The Proud Place is essentially a levelled-up version of Manchester's old LGBT Centre, which was demolished in 2020. It even occupies the same location a short walk from Canal Street in the centre of the city's gay village. The new three-storey building has a café, community rooms, roof garden and a library with nods to the LGBT Centre's rich history. The aim is to provide a versatile safe space for young LGBTQ+ people and anyone grappling with their sexuality or gender identity. 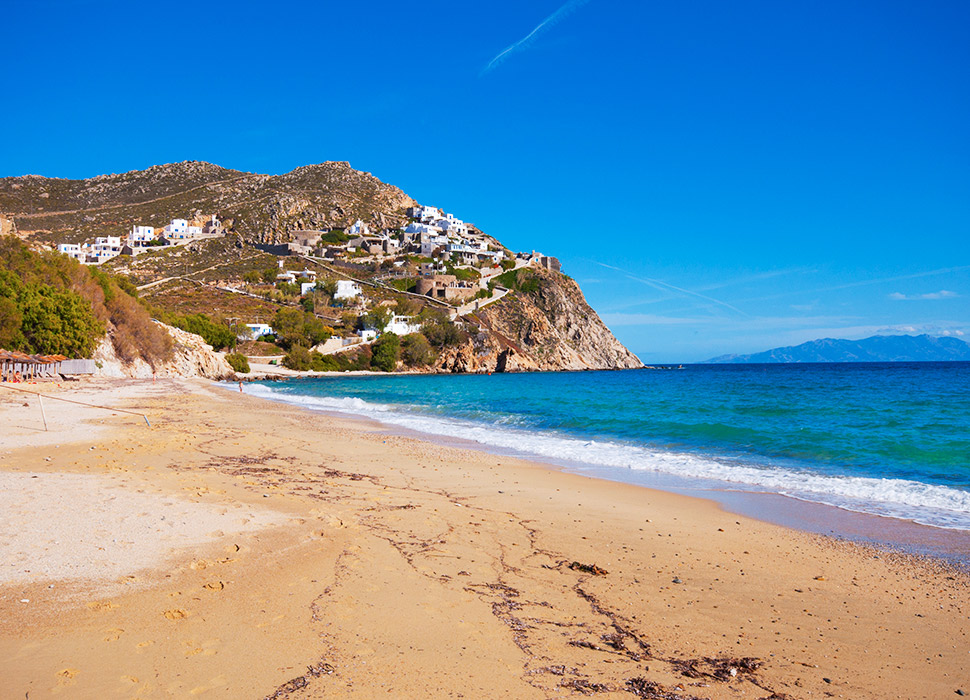 As you'd expect from an island that attracts plenty of LGBTQ+ visitors, Mykonos has several gay-friendly beaches. Elia isn't just the most beautiful, but also the coolest. Located 10km south of Mykonos Town, it's a long and lovely stretch of sand with an unofficial gay zone designated by a rainbow flag. If you're feeling especially confident, there's a secluded spot for nude sunbathing just beyond a rocky outcrop. 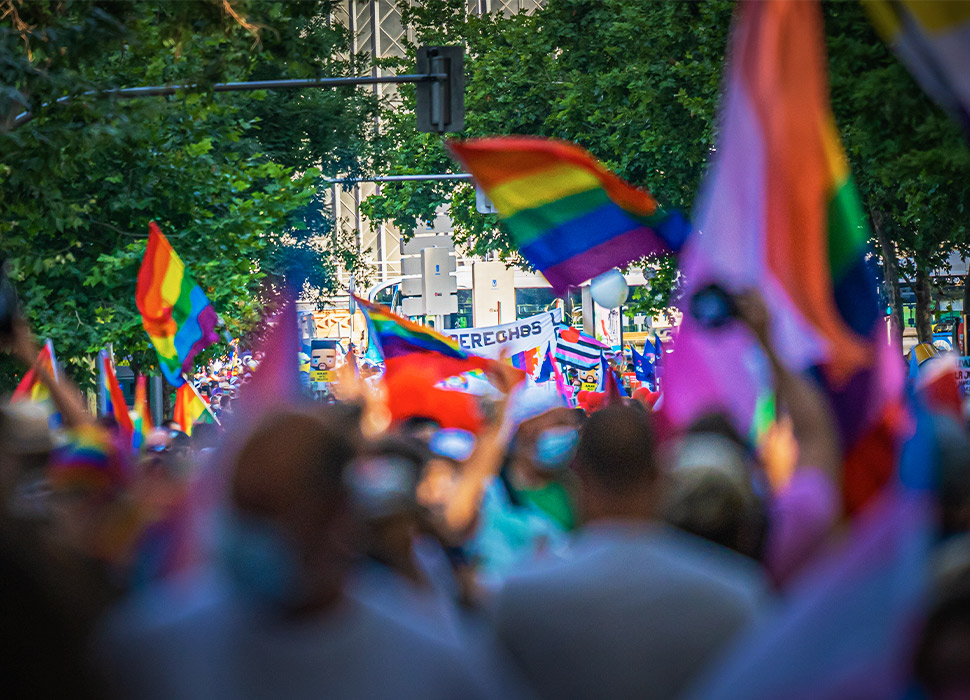 Madrid's LGBTQI+ scene is based in Chueco / Image: Adobe Stock

In 2005, Spain became the third country in the world to legalise same-sex marriage, and its capital city reflects this progressive spirit. Madrid's LGBTQ+ scene is rooted in Chueco, a central neighbourhood that mixes traditional Spanish architecture with a super-inclusive community feel. After dark, Chueco has a bar for all tastes – from Bearbie for bears to LL Show Bar for drag lovers – where the party rages on until morning. This is Spain, after all. 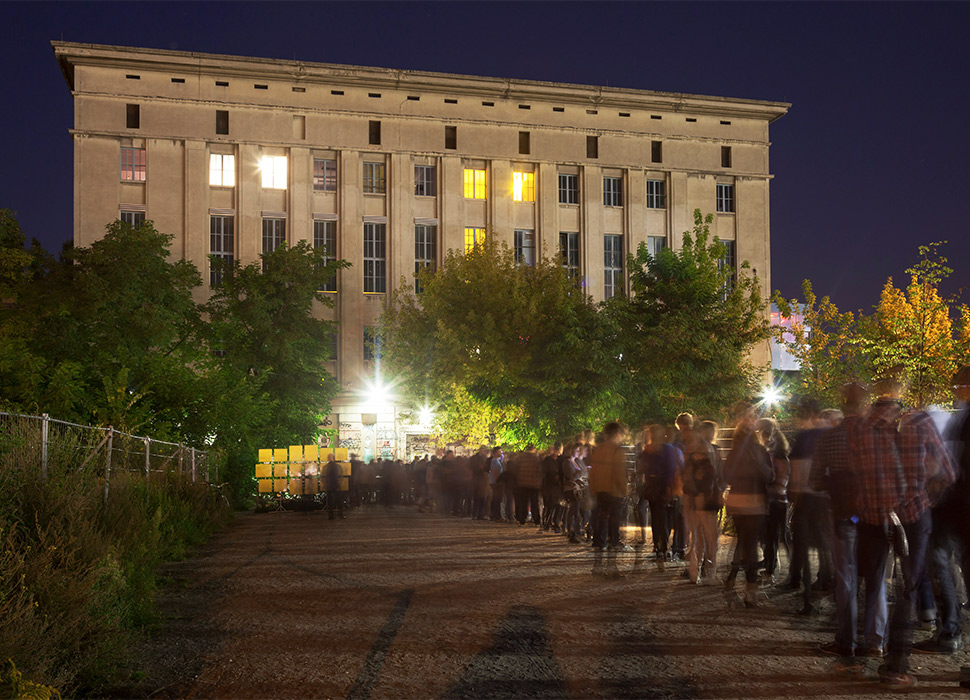 Since it opened in 2004, Berghain has acquired near-mythical status by cultivating a real sense of mystery: there's a strict "no photos" rule and the door policy is famously opaque. No one really knows how to guarantee entry, but if you look even slightly awkward in the queue, you'll be sent packing. On weekends, it's open continuously from Saturday night to Monday morning, when it attracts a largely LGBTQ+ and very open-minded crowd. A tip from the regulars: don't wear fancy shoes.

Portugal's best-known drag brunch will leave you feeling fed – in all senses. Here, the queens aren't just hostesses and performers; they're also the chefs cooking the food. Once you've piled your plate and helped yourself to a bottomless mimosa, sit back and enjoy drag shows, live music and DJ sets. There are two sittings every Saturday and Sunday, all hosted by the fabulous Teresa Al Dente, who describes herself as "the biggest grandmother in the world". Which explains why the food's so good. 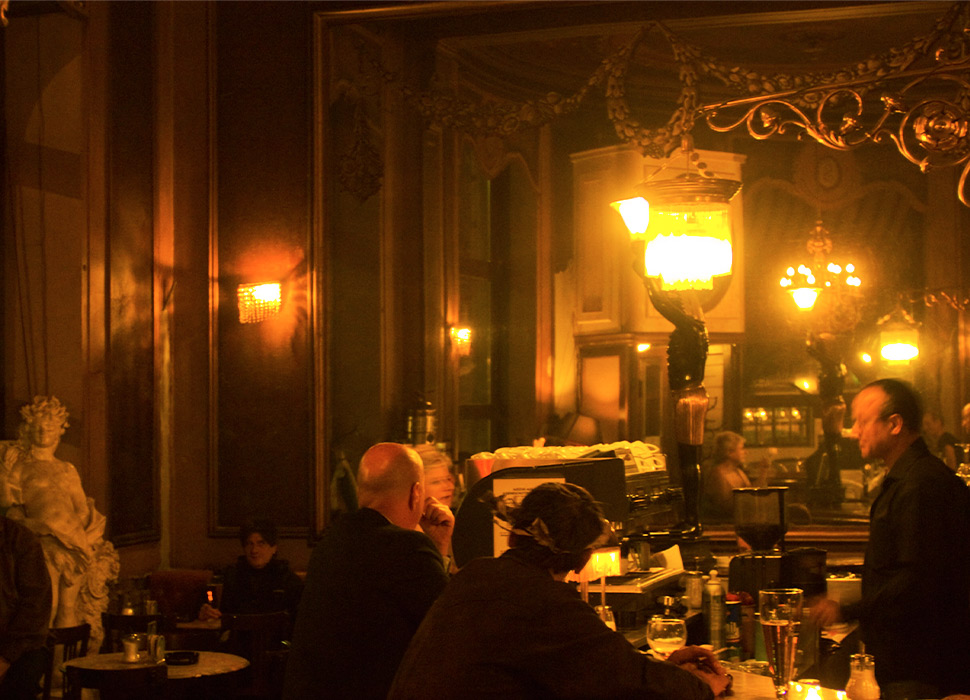 In a city of historic coffee houses, Café Savoy stands out. The huge mirror and chandelier by 19th century architect Theophil Hansen add grandeur; the coffee and pastries are top notch. It's long been a go-to destination for Vienna's LGBTQ+ community, who pop in for snacks and a caffeine fix in the daytime, then pre or-post bar drinks in the evening. Café Savoy also hosts a regular Sunday brunch beginning at 10am; book in advance because it gets very busy.

Located in Barcelona's foodie neighbourhood of El Poble-Sec, La Federica offers a gay (in all senses) take on the Spanish tapas bar. Run by two men named Albert – "The Alberts" to regulars – it offers high-quality wines, cocktails and small plates in a trendy setting. The cooking is impeccable, but La Federica gains extra brownie points by creating a convivial vibe with live entertainment and Drag Race screenings. It's a place where you can happily while away an entire evening.