We should all be a little more ethical, even on holiday. From zero-impact Swedish cabins to languid cargo cruises on the Aegean, these are the best green trips to take in Europe

Things are even more ecologically better down where it's wetter. Meet the people turning the blue seas around Ibiza green.

Low-impact snoozing your thing? Then check out the best wild (and almost wild) camping spots in Europe.

Hole up in a zero-impact cabin on a Swedish islet 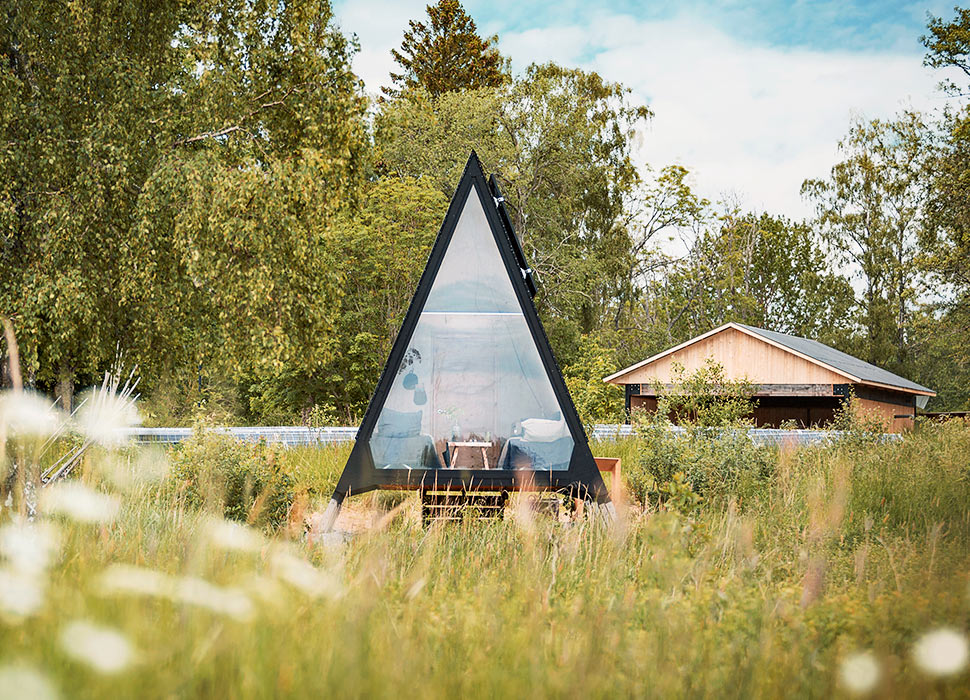 When it comes to sustainability, Scandis don’t mess about – so when they open a zero-impact bolthole on a tiny speck of an island, they really mean noll impact. The Nolla (or 'Zero') Cabin is peak Nordic minimalism: a bijou triangular structure made from plywood and pine, containing just two beds and a stove powered by renewable diesel. Electricity comes care of some nifty solar cells, while widescreen views of the sea are courtesy of the floor-to-ceiling glass wall at the back of the cabin. You’ll find this impressive experiment in low-impact living on Lidö – located at the northern tip of the Swedish Archipelago, around 80 minutes drive from Stockholm Arlanda airport, it was the first Swedish island to make the switch over to green energy entirely, slashing its emissions to nearly zero. 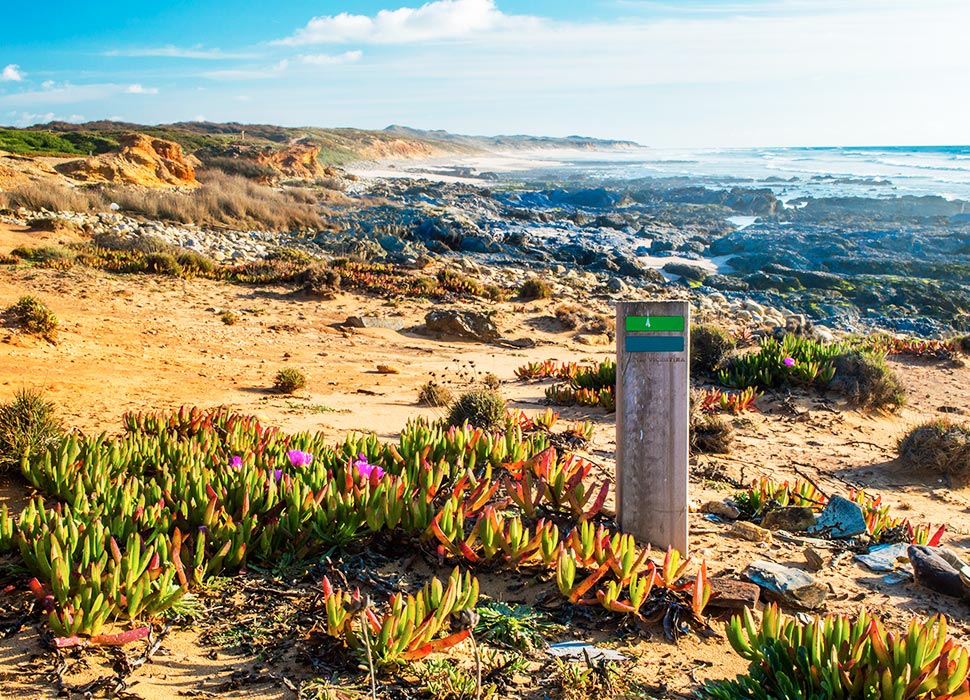 Though it’s just a short hop from Lagos, the Costa Vicentina – a wonderfully wild national park straddling Portugal’s southwest coast, equidistant to Lisbon and Faro – has mostly evaded the gaze of tourists. You won’t find any mammoth hotel chains or high-BPM beach bars here – just an abundance of wildlife, secluded honey-sand beaches, and world-class hiking trails that form the Rota Vicentina network. The residents who live along the Rota Vicentina are proud of their little corner of Portugal; so proud, in fact, that they’ve launched a new initiative to entice people down, featuring a whole programme of sustainable activities running throughout the summer. Get a glimpse of life in this fascinating region through local-led cycling tours, foraging walks, traditional crafts workshops and more.

Lose your signal with a paddle down the Wye

Gliding down a quiet country stream, flanked by dripping willows and bobbing swans, as the four bars on your screen flicker to three, two, one, and then none… bliss. The River Wye, which snakes across the English/Welsh border, is a delightfully wild place to get lost, and Canoe the Wye can provide the perfect vessel for an afternoon (or two days) of dreamy drifting. All you need to do is rock up to their hire centre in Symonds Yat (90 minutes by car from Bristol airport), pick your desired dinghy (canoe or kayak), then get scooped up in their minibus – boat and all – to be deposited at your choice of ‘launch point’, and begin your blissful journey downstream. 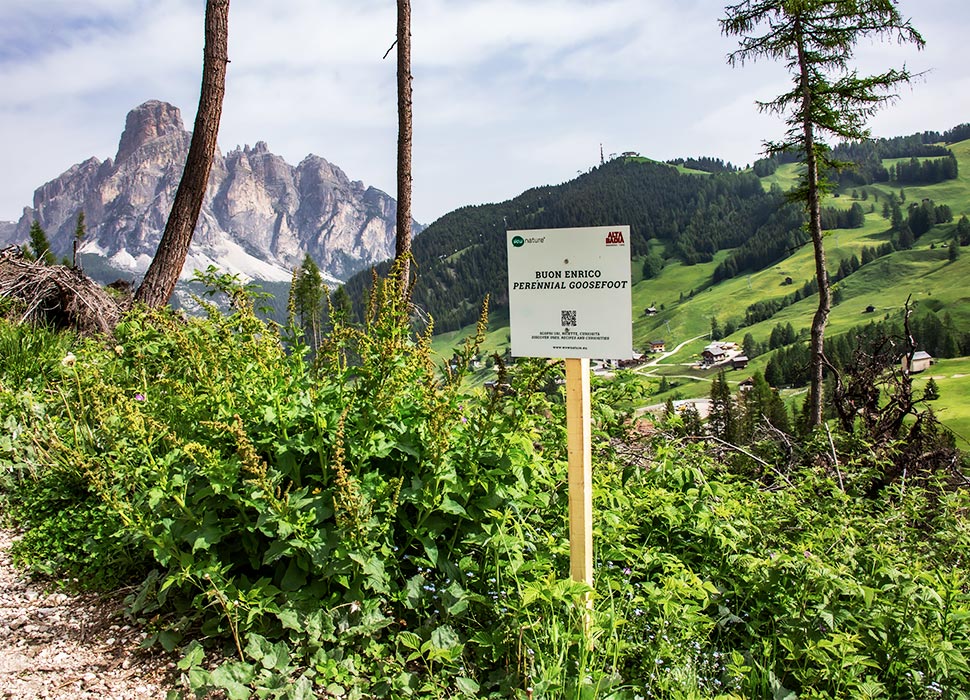 It may sound like a room in Willy Wonka’s factory, but don’t try taking a bite out of the trees in South Tyrol’s whimsically named Food Forest – they won’t be made of chocolate. Instead, this bounteous forest is the site of a reforestation project spearheaded by the University of Padua and the Alta Badia government, which is aiming to build an agricultural system that could neutralise carbon emissions in the region and diversify alpine fauna. The initiative was launched after a brutal storm severely damaged the area in 2018, and has since completely transformed the forest’s biodiversity – nowadays, you’ll find all manner of delicious things growing in the forest, including blackcurrants, raspberries, wild strawberries, juniper berries, elderberries"

poiz and more. Visitors can either opt for self-guided tours, or join an organised trip guided by locals. Various airports serve the area, but Innsbruck and Venice are the closest.

Hop the Greek isles on a solar-powered sail boat 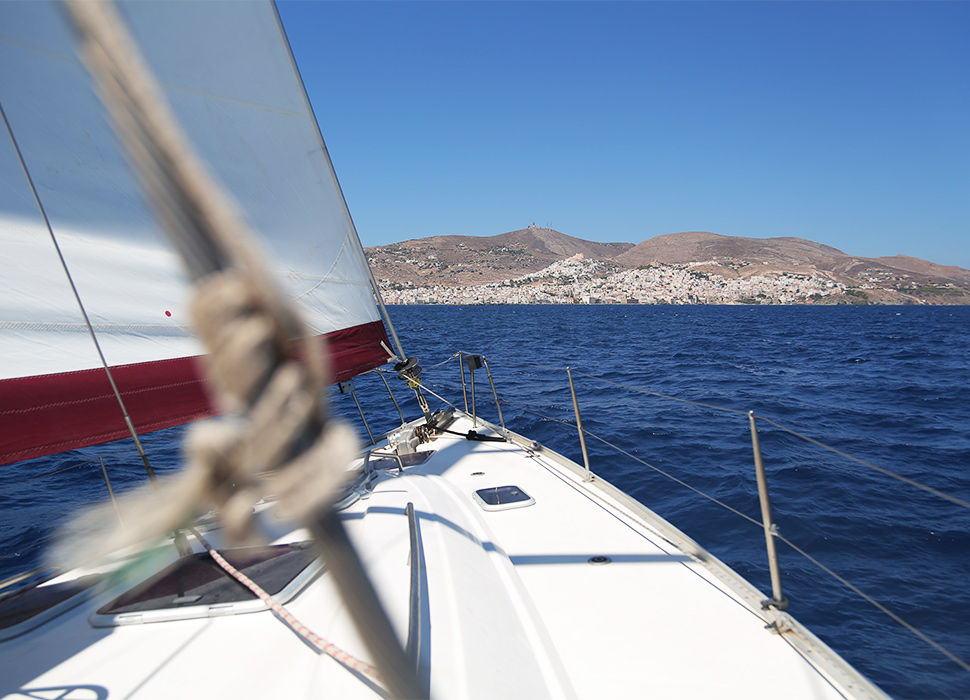 You 'cargo' wrong with one of these blissfully ethical voyages / Image: Antoine Guerre

If you dream of an expedition on the open sea, Sail Med’s Mediterranean voyages may be just the ticket. This innovative Greek company cannily combines environmentally friendly cargo delivery with eco-tourism on its fleet of wind-powered sailboats, harking back to ancient Greece’s preferred mode of commercial transport. Electricity on board comes courtesy of deck-top solar panels, and each vessel has a strict four-passenger limit to ensure things never feel cramped. Their summer voyages – which run from five nights to ten – track between 18 Greek islands across the Aegean and the Med, and include full board and a programme of guided excursions.

Poor loggerhead turtles are having a rough time – these sea-swimming slowpokes are in serious danger of disappearing completely. That’s why the good people at Global Vision International have set up shop near one of the loggerheads’ most important nesting areas on Greece’s west coast, where they spend their days shielding the little shell-dwellers from predation and flooding by the rising ocean tides – though, really, hanging out with a bunch of adorable turtles on Greece’s unpeopled pristine western coast is no hardship. Their volunteer program – which takes place in Giannitsochori, a few hours' drive from Athens – is open to all who want to inject a bit of benevolence into their beach holiday, and includes in-full-nature tent accommodation and visits to nearby nature reserves. 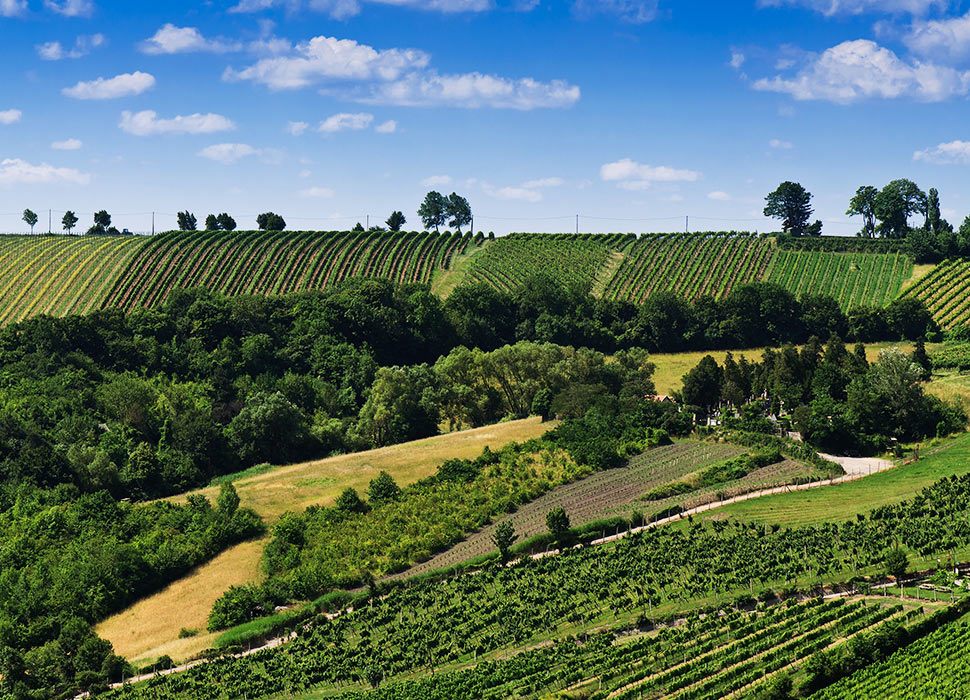 A picture-perfect vineyard just outside of Vienna / Image: Adobe Stock

Most people know Vienna for its splendid baroque palaces and storied musical history, but not many are hip to the Austrian capital’s impressive eco credentials. The city has been continually praised by international organisations and think tanks for its sustainability initiatives – most recently in Resonance Consultancy’s 'Best Cities' review, where it received top grades on the report’s green index. Residents won’t be surprised by all the hoopla, though – almost half of them have an annual public transportation pass, and all Viennese make use of their city’s impressive public parks, which occupy 50 percent of Vienna’s total area. If you find yourself in super-green Wien, be sure to take advantage of the city’s extensive cycling network (all 1,300 km of it) by renting a Citybike and taking a spin out to an organically minded heuriger, a local winery where you can sample this year’s vintage.

Fill up on the slow food of Crete 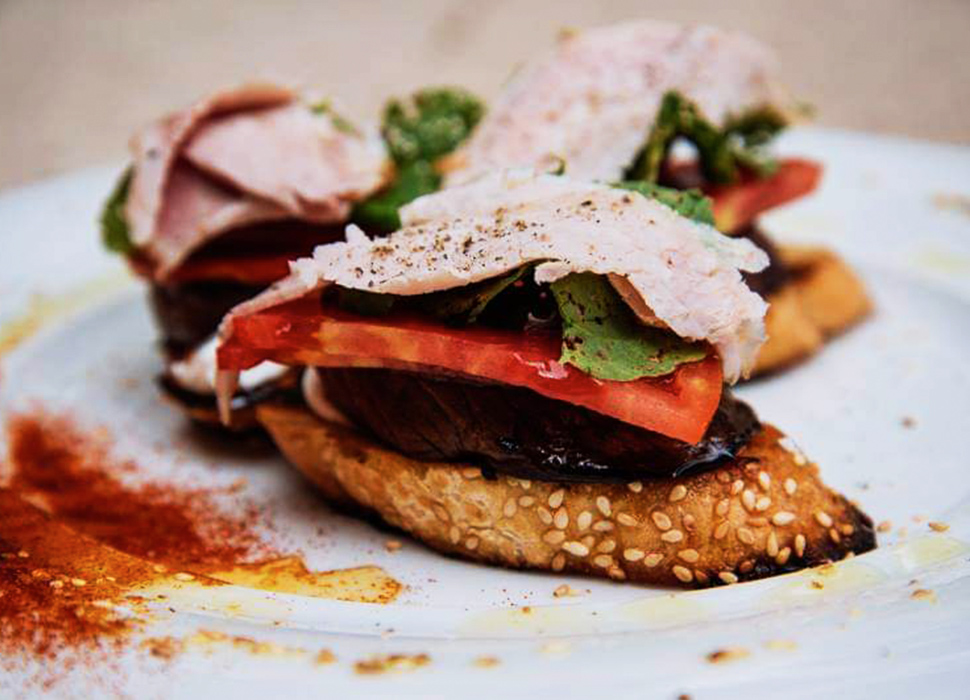 A hyperlocal plate of magic at Kritamon

Picking the most delicious Greek island would be a fraught exercise, but if we had to choose, we’d put our money on Crete. The largest Aegean isle is known for outrageously tasty cuisine that leans on bountiful local produce sourced from the island’s traditional farms, making it a poster child for the slow-food movement. To really see Crete’s farm-to-table culture in action, head to Agreco Farm – a family-owned estate whose old-school farming methods yield the glorious Cretan dishes served (with wine aplenty) at an on-site taverna. Elsewhere, a former Alain Ducasse protégé cooks archaic Greek recipes using hyperlocal ingredients at Kritamon, and Chrisostomos serves soulful mountain food to guests who’ve fought for a coveted table.

E-bike around the Loire’s vineyards

The Loire Valley – with its world-famous vineyards and endless aristocratic piles – is a heady, high-French dream, the country backroads of which are best explored by bike. But there’s nothing less regal than chugging breathily over hilly bridleways on a chateaux hop. Loire Life Cycling is a saviour for the wobbly-legged – its no-sweat, eco-friendly e-bike tours are the chillest way to tour the valley. You can opt to make your own way around or join one of the multi-day ‘discovery’ tours that showcase the best of the region – including magnificent estates, cliff-carved troglodyte ‘villages’ and wineries galore (all easily reached by flying to Nantes). 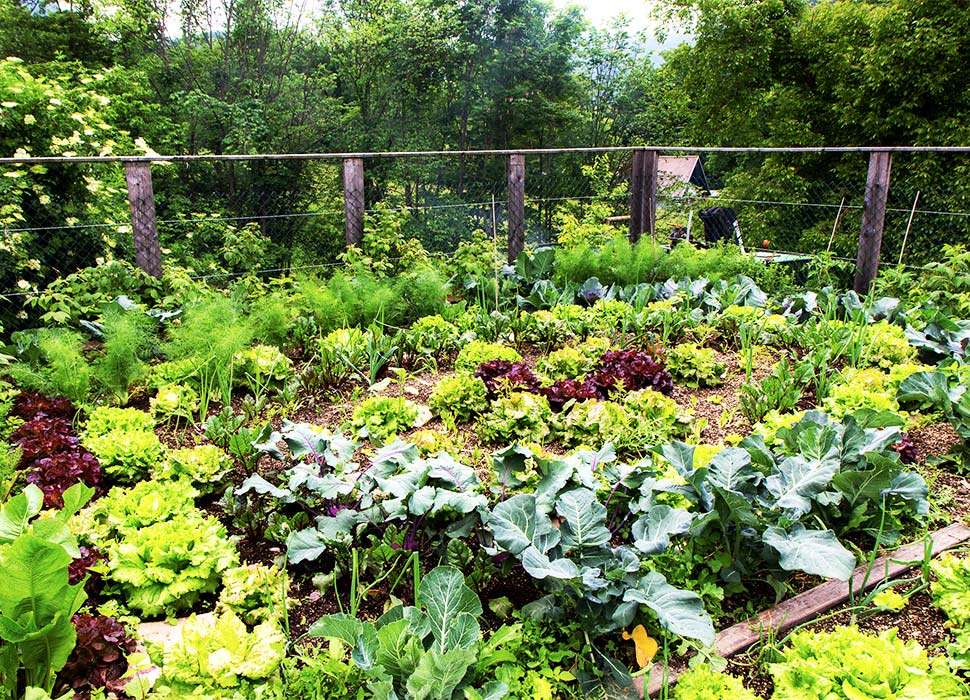 Slovenia’s Lake Bled is chock-full of postcard-perfect scenery and staggering natural wonders, and there’s no better way to experience it all than camping. But for those who aren’t the roughing-it types, the Garden Village offers comfy, glamping-style lodgings in a sprawling eco-resort that aims to immerse guests in Bled’s lovely landscape. Wake up to birdsong in one of the blissful treehouses, each made from Slovenian wood and perched high enough for total seclusion, or be lulled to sleep by the sound of a burbling stream in a capacious safari-style tent. The food on the on-site restaurant is delicious and made from ingredients sourced mostly from the resort’s own garden.

Chug across the Pyrenees in a vintage train

The unique mountainscapes of the Pyrenees are best seen from on high, where you can appreciate their dramatic, serrated peaks dusted in snow. Arena Travel’s vintage trains get right into the heart of Spain and France’s most handsome mountain chain, rattling across sky-skimming aqueducts and right over the tallest crests. Its eight-day voyage begins and ends in the Spanish town of Roses, and is split between two equally adorable vessels: the rubber duck-coloured Yellow Train, which journeys across the forested Tet valley, and the Red Train, which glides along the Núria valley’s rugged coast.