Finland's Ruka resort is one of the most blushingly beautiful in Europe / Image: Adobe Stock

Europe is flush with super skiing – but sometimes you want to dodge the crowds and head to lesser-known (but still magical) slopes. From hyper-scenic Scandi outposts to absorbing Alpine destinations, here's our pick of the best

Finland's Ruka resort is one of the most blushingly beautiful in Europe / Image: Adobe Stock

Europe is #blessed with a staggering amount of really, really brilliant ski resorts. Many of them are world class, such as St Anton, Verbier, Zermatt and Val d’Isère, all of which are often claimed to be ‘the best’.

But as gorgeous as these classic winter destinations are, they can often come with crowds, queues, wait lists and little opportunity to get off the beaten track. From spots just shy of the Arctic Circle to UNESCO-approved mountain ranges, we’ve steered away from the obvious and picked our 10 favourite resorts that don’t typically appear on ‘best of’ lists. Contentious, we know – but do try not to get piste off, yeah?

Piste done, it's time to get, er, pissed. These are the best après-ski scenes in Europe.

Looking to improve your next schlep to the slopes? Here are eight ways to nail your next ski holiday. 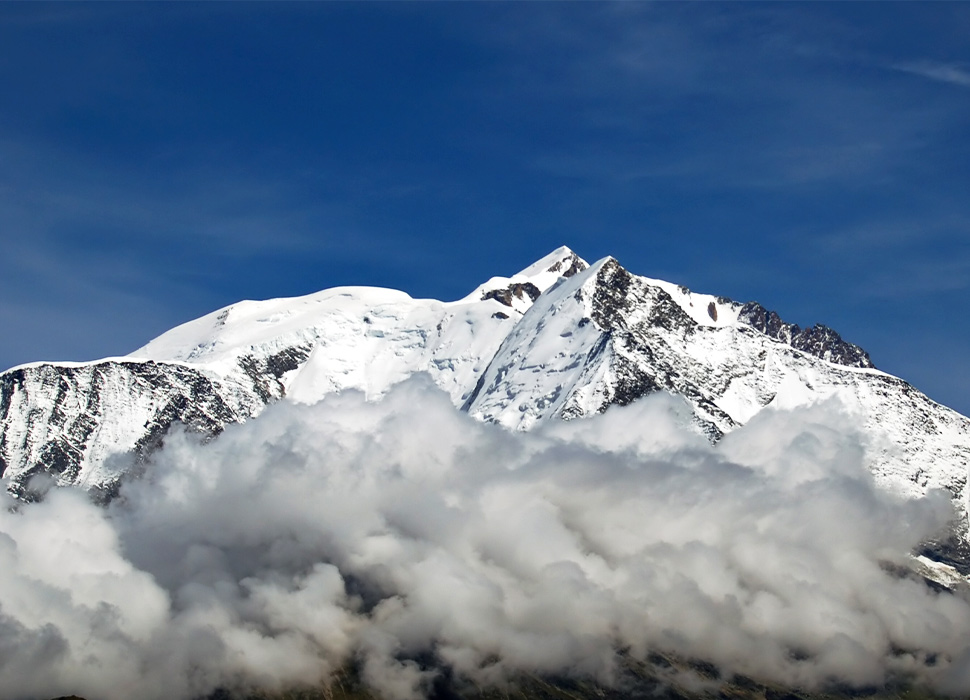 St Gervais is often overlooked by its more famous neighbour Chamonix. And while Chamonix is great if you’re an expert, it’s not great if you’re, er, not. St Gervais, on the hand, is fabulous for intermediates who love to ski long, cruising, tree-lined runs, all while enjoying stunning views of Mont Blanc. The lifts link the resort to Megève in one direction and Les Houches in the other, each with plenty more flattering skiing. And we love the town of St Gervais itself – it’s a properly authentic Alpine bolthole, not a purpose-built resort. 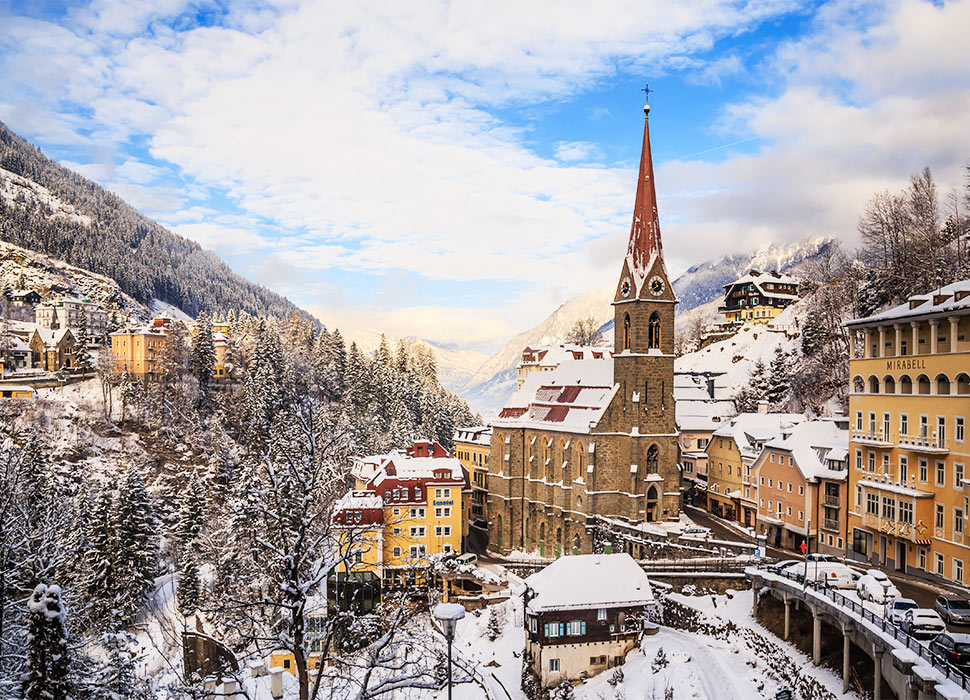 Bad Gastein: very much not bad at all / Image: Adobe Stock

Thanks to its thermal waters, Bad Gastein has long been a popular place to visit – even the Romans liked to holiday there, and it’s clear to see why. The now Belle Époque town is full of 19th-century grandiose hotels and villas, while a dramatic waterfall, the Gasteiner, tumbles through the middle of it. On the edge of the High Tauern National Park, the skiing is split between four regions, each distinct – Sportgastein is our favourite for its freeride terrain. And all that thermal water makes for a relaxing soak after a hard day on the slopes. 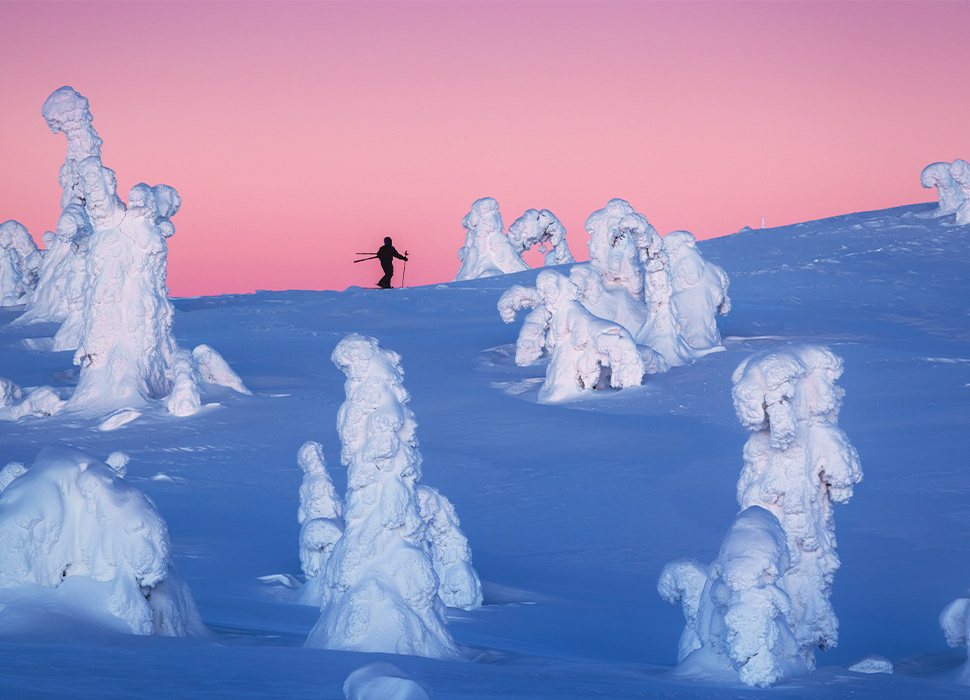 Dreamy pistes in the north of Finland / Image: Adobe Stock

A ski holiday in a Scandinavian resort is very different to one in the Alps – in a good way. One of the best places to give it a whirl is Ruka, in the far north of Finland, just shy of the Arctic Circle. Ruka gets our nod for its family-friendly slopes, and views over the frozen lakes and forests from the summit, as well as all the other activities this place naturally lends itself to. How about floating down a river on your back (in a dry suit, of course), or heading into the woods on a husky dog sled? 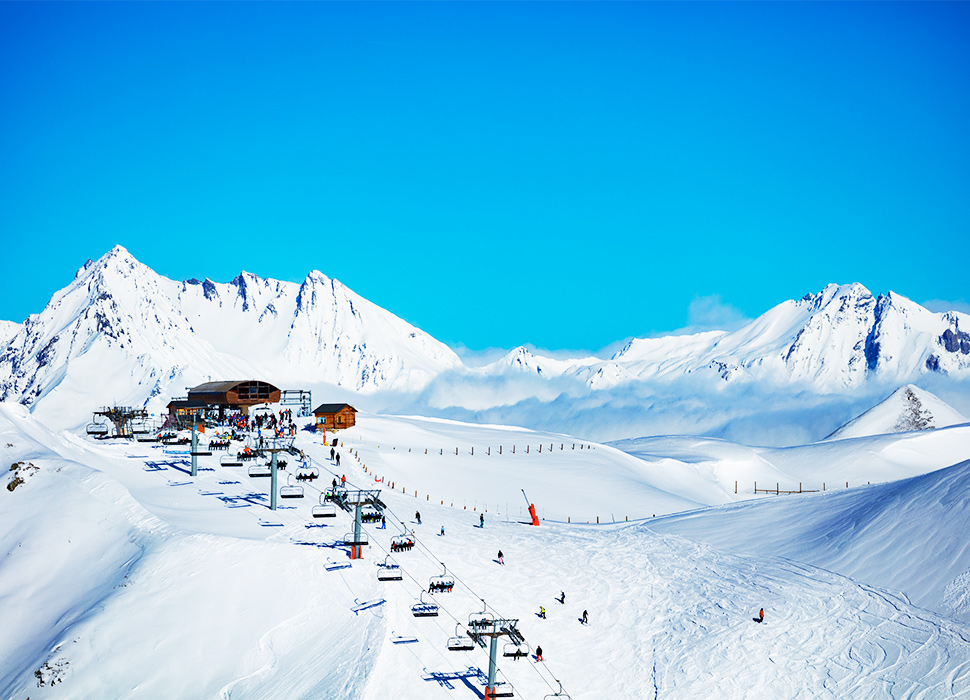 Always closely fought, the best resort for thrill-seekers is in the eye of the beholder. Our money this season is on Les Arcs, a sprawling resort with 425km of runs shared with its neighbour La Plagne. Its pedigree is high – the resort being home to the Flying Kilometre piste where pros reach terrifying speeds of over 200km/hr (and amateurs can give things a go under club supervision). Things continue in a similar vein with two zip wires, one in Arc 2000 and one in Peisey-Vallandry. Will you reach those dizzying speeds of the Flying K-ers? Nearly: expect to clock 135km/hr. Terrifying. 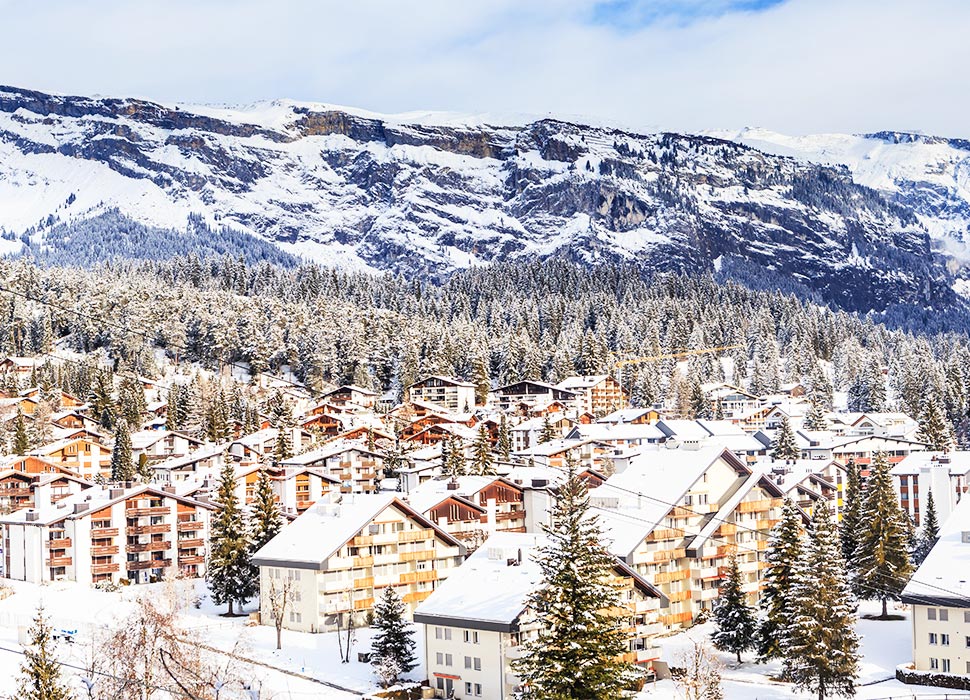 There's nothing Laax about the eco credentials here / Image: 123rf

Championing a sustainable way of life – and therefore making it something of a no-brainer resort for the forward-thinking – is Laax in Switzerland, with its bold aim to be the world’s first self-sufficient Alpine destination. And it's making big strides, with plans to change all its fuel-based consumption to hydro, wind, solar or biomass well underway. Laax is regularly voted the best resort for freestylers, thanks to its epic snowpark and world’s largest halfpipe. How long will it be before it’s also the world’s most eco-friendly resort? 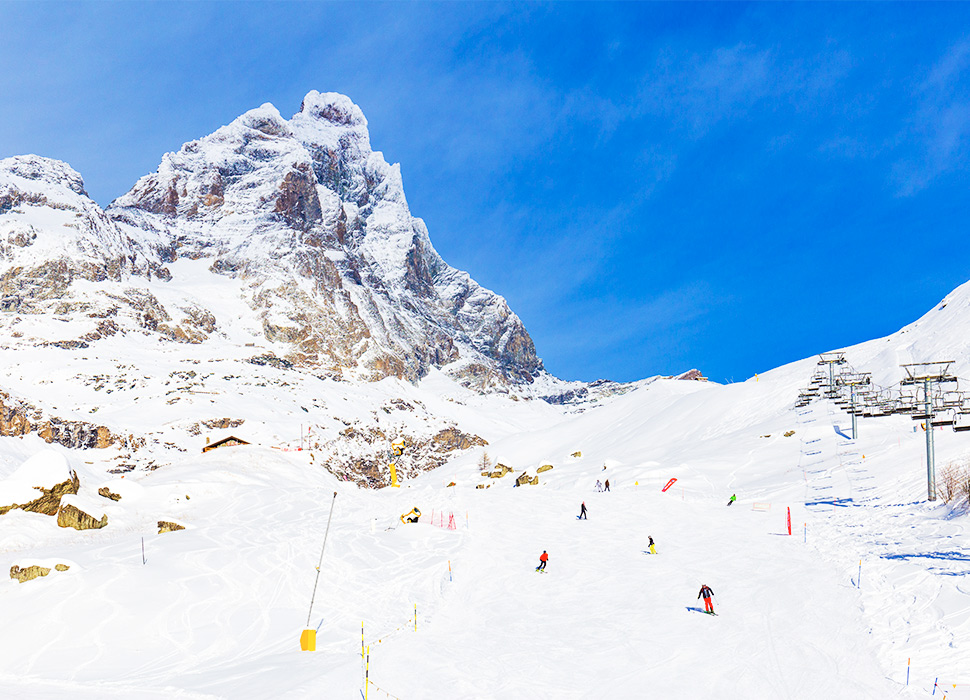 A stone cold classic resort that's often overlooked by its more famous neighbour Zermatt, over the border in Switzerland, Cervinia is a fabulous high-altitude, year-round playground. And while Zermatt has the view of the Matterhorn that's graced millions of Toblerone bars, Cervinia gets a far more meatier, chunkier take on the peak. This Italian resort has it all – miles and miles of flattering blue and red runs, year-round skiing on its glacier, and sparkling slope-side spritzers. 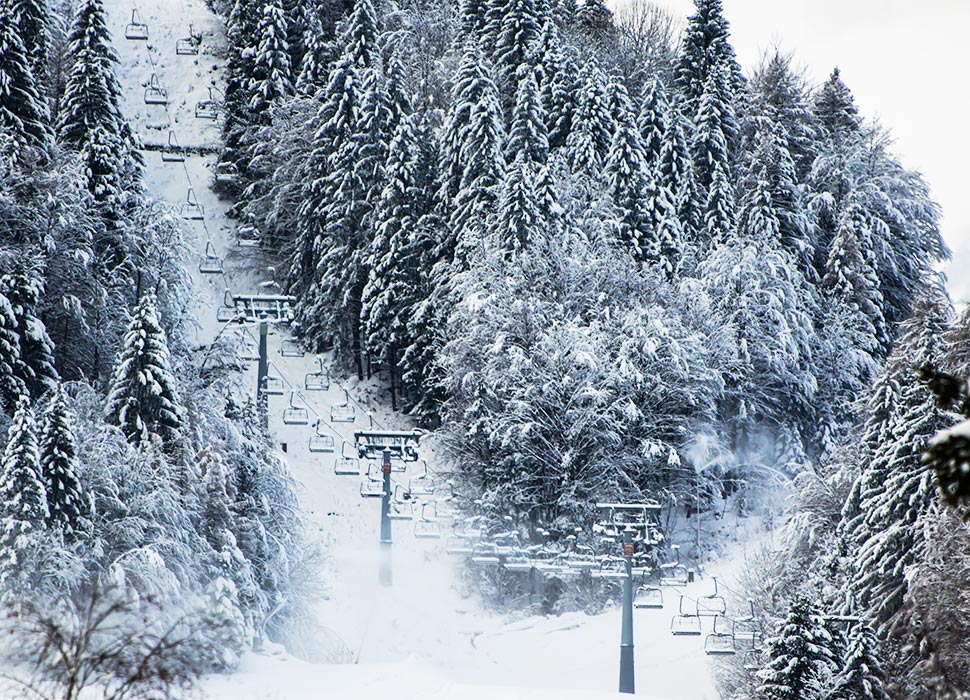 The Julien Alps are an under-utilised but irresistible ski destination / Image: Adobe Stock

Despite what some people may think, a winter ski holiday doesn’t have to be in the Alps. Eastern Europe offers plenty of alternatives, and Slovenia's Kranjska Gora is one of the best, especially for beginners and early intermediates. It’s great value, both on and off the slopes, so has a naturally fun and relaxed atmosphere. And its spot in the Julien Alps, close to the border with both Italy and Austria, gives any of the typical Alpine vistas a run for their money. 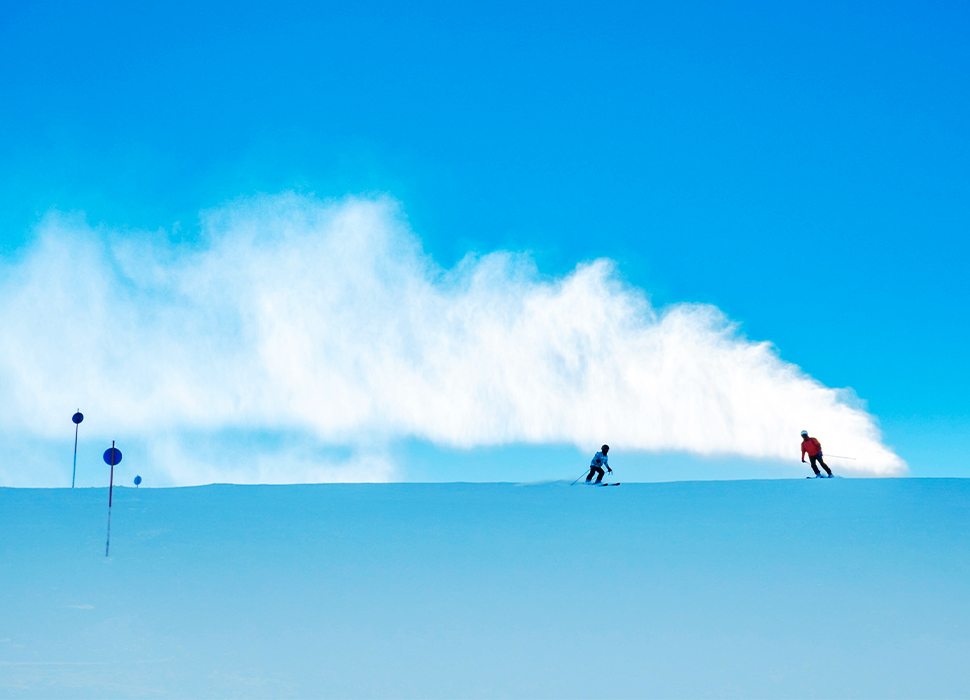 If you’re one of those skiers or snowboarders that is never happier than when you’re clocking up the mileage on piste after piste, then the Ski amadé just might be your new fave. It’s a huge beast, with 760km of runs spread across 25 ski areas in five regions and two states.

✈ Fly to Salzburg or Munich 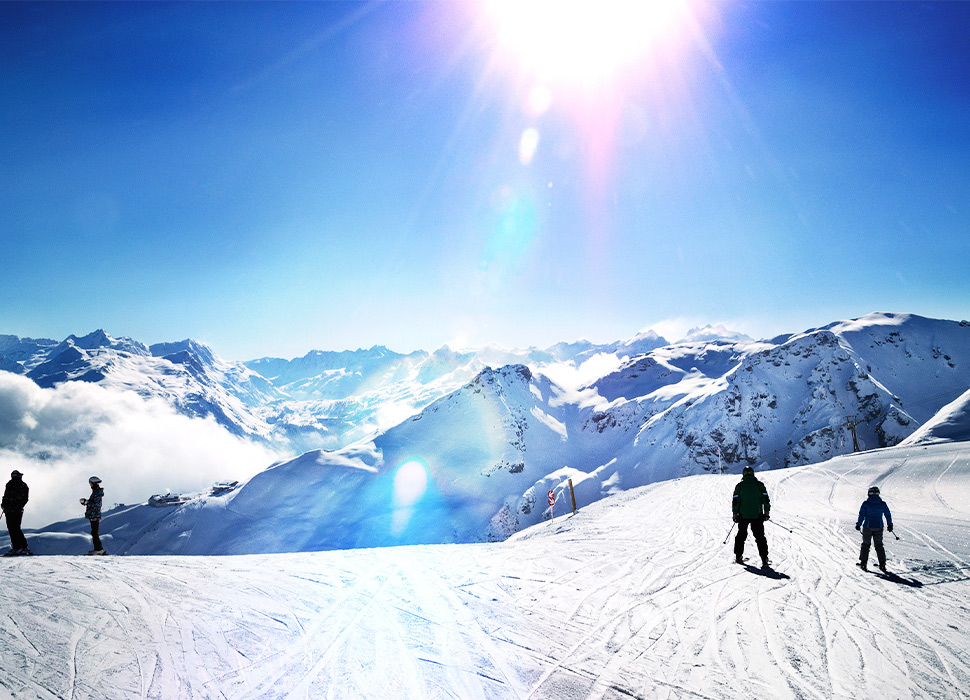 If you’re a skier or snowboarder who hankers for fresh powder but isn’t prepared to pay over the odds to stay near it, make a beeline for the Silvretta Montafon in Austria’s Vorarlberg state. This little region, tucked in by the Tirol, has staggering snowfall records and Silvretta Montafon makes the most of it with the longest valley descent in the area. Stay at hostel St Josefsheim Eat & Stay for access to powder without the price tag (ideal for younger and more penniless piste enthusiasts). 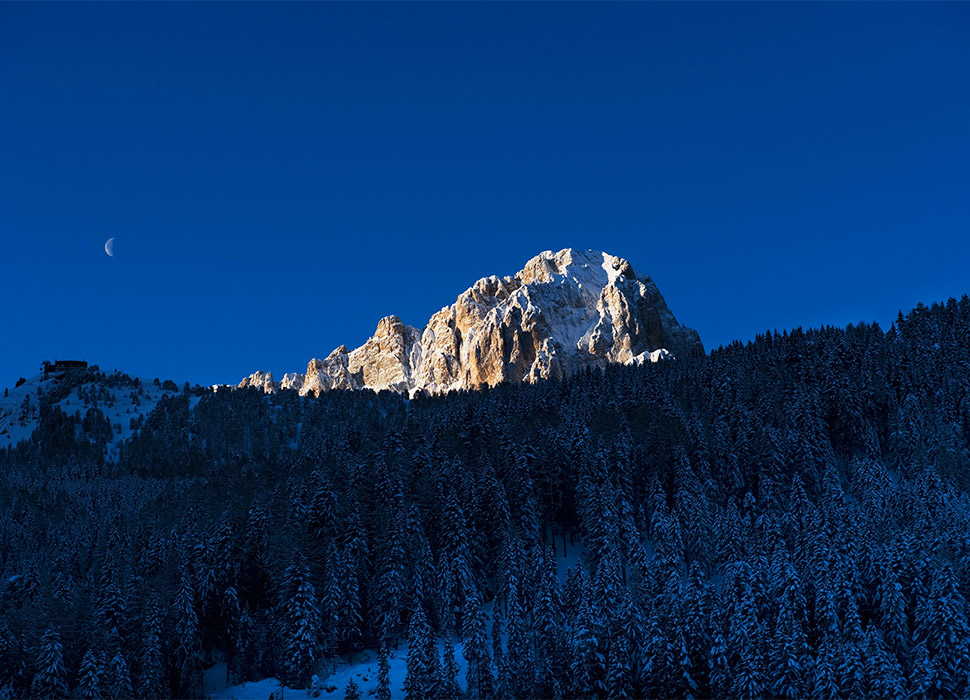 These just 'mite be the prettiest mountains in all Europe / Image: Alamy

The Dolomites have to be seen to be believed. UNESCO recognises them as some of the most beautiful mountains on the planet – their pale, sheer cliffs contrast with the dense green forests and snow-covered meadows below, and skiing among them is a delight. Nowhere is that view better than at Alpe di Siusi, part of the Val Gardena valley above the village of Ortisei. Here you’ll find such dramatic, atmospheric peaks as the towering Sassolungo, the Sciliar massif and, in the distance, the Sella group, as well as some wonderfully flattering slopes and very welcoming mountain huts.